I try to leave things open to a form of disorientation and the possibility of navigation. I am more sensitive to the physical and mental wavering that the works can produce than I am attentive to a position from which they should be seen or understood in this or that way.
— Tatiana Trouvé

On June 8, 2022, two complementary presentations of works by Tatiana Trouvé open in Paris: Le grand atlas de la désorientation (The Great Atlas of Disorientation) at the Centre Pompidou and an exhibition in Gagosian’s gallery at 9 rue de Castiglione. Together, the exhibitions focus on Trouvé’s coextensive drawing and sculptural practices, in which fragmentary graphic, architectonic, and environmental elements form spaces imbued with the logic of memories and dreams. 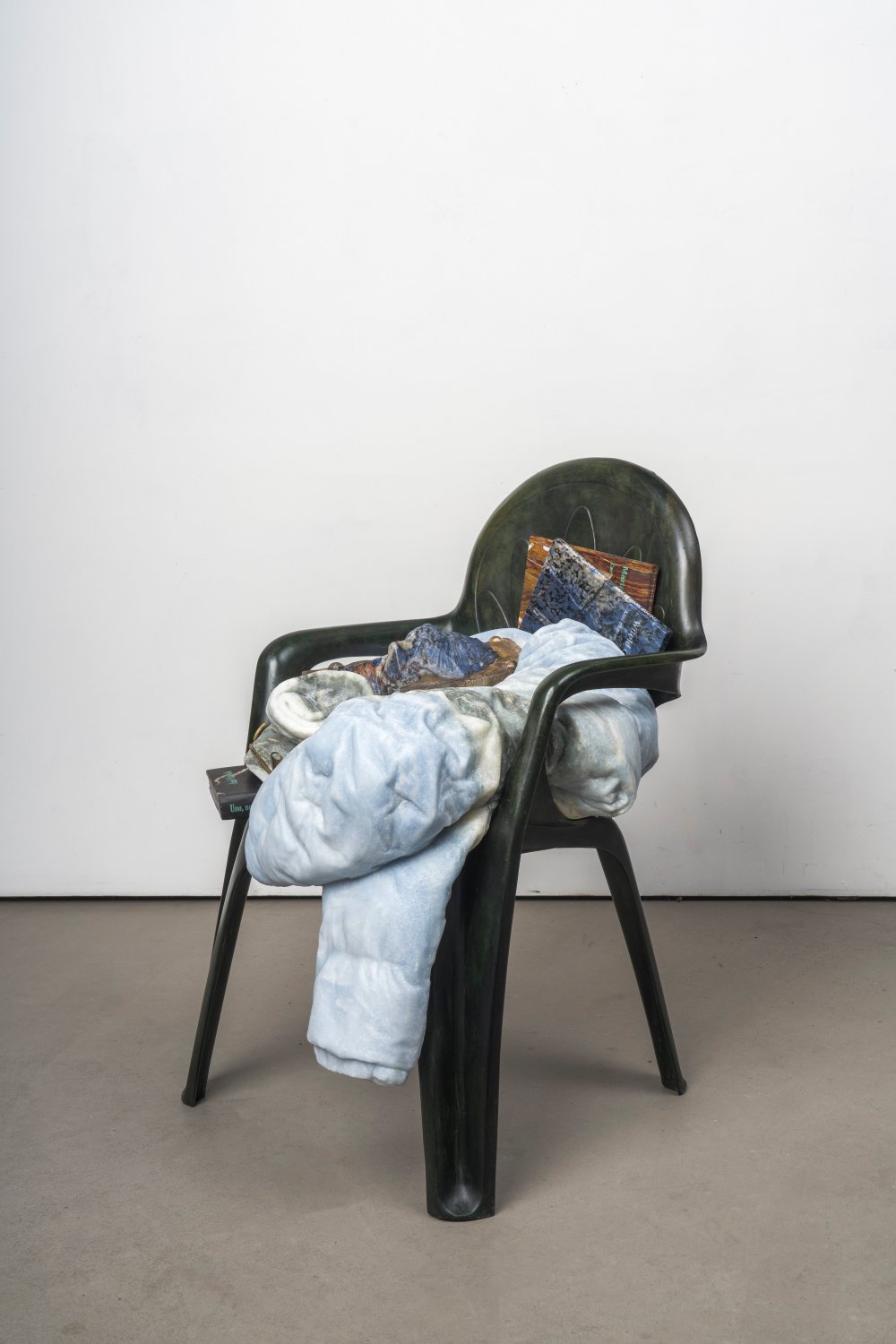 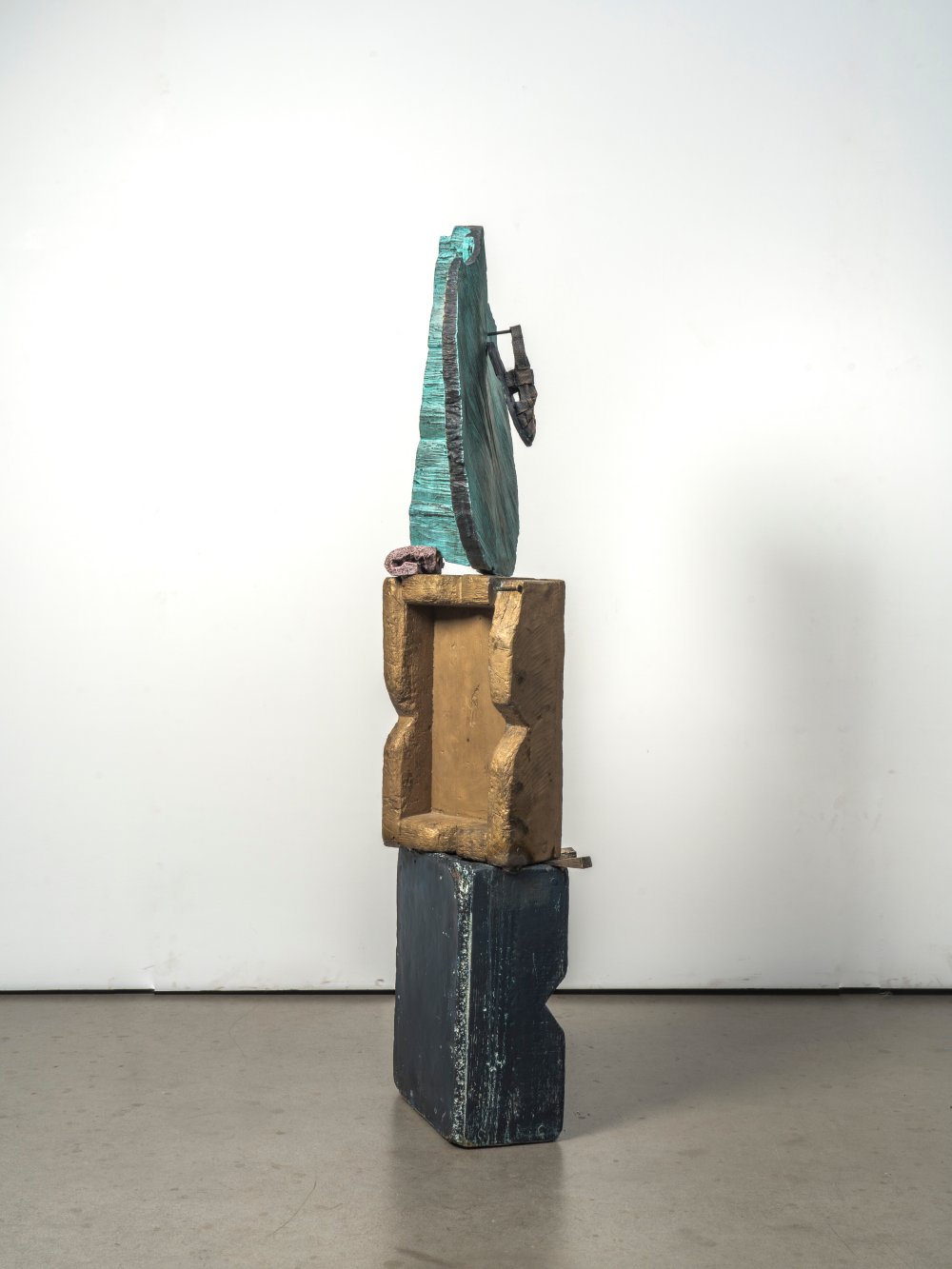 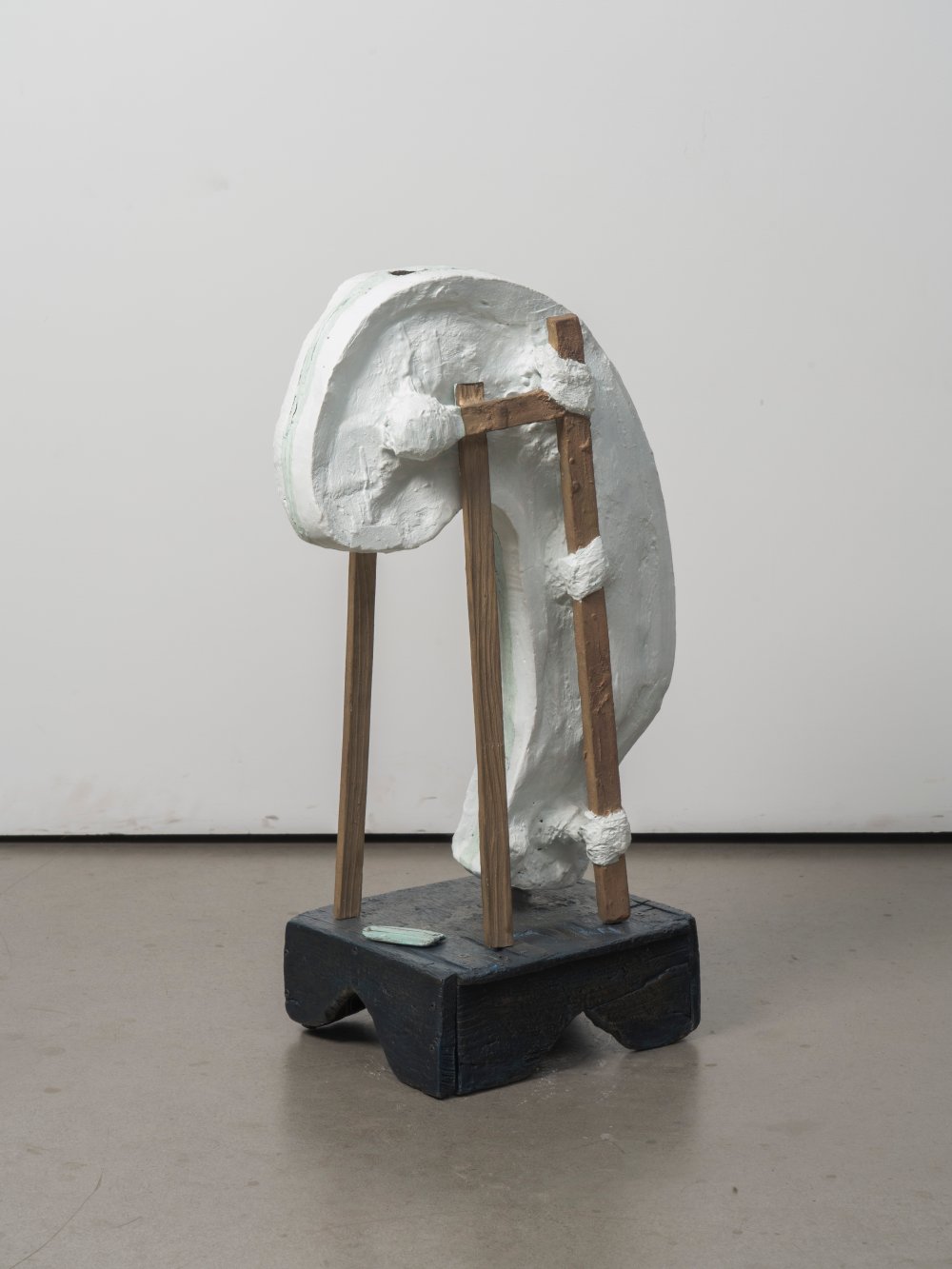 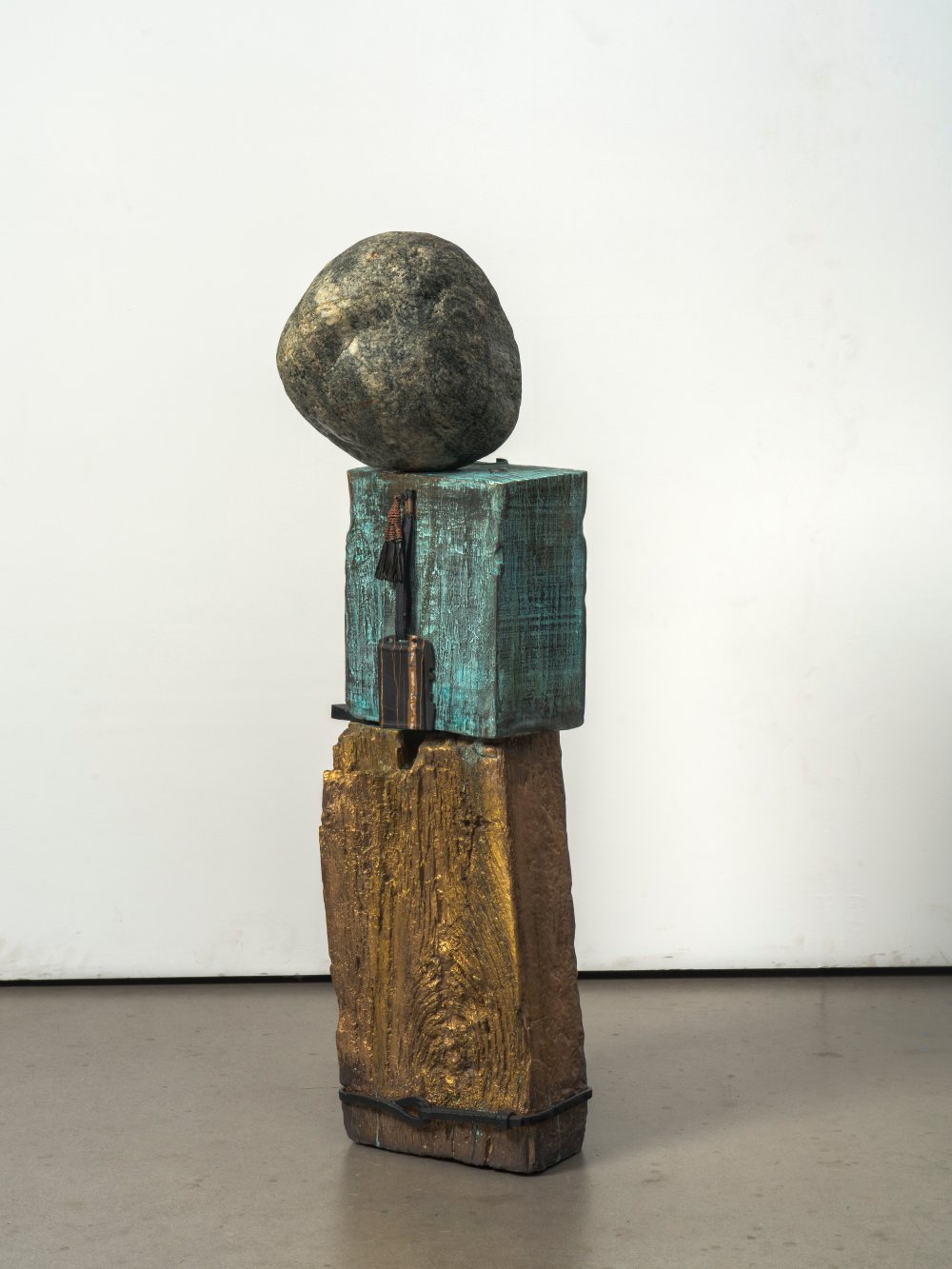 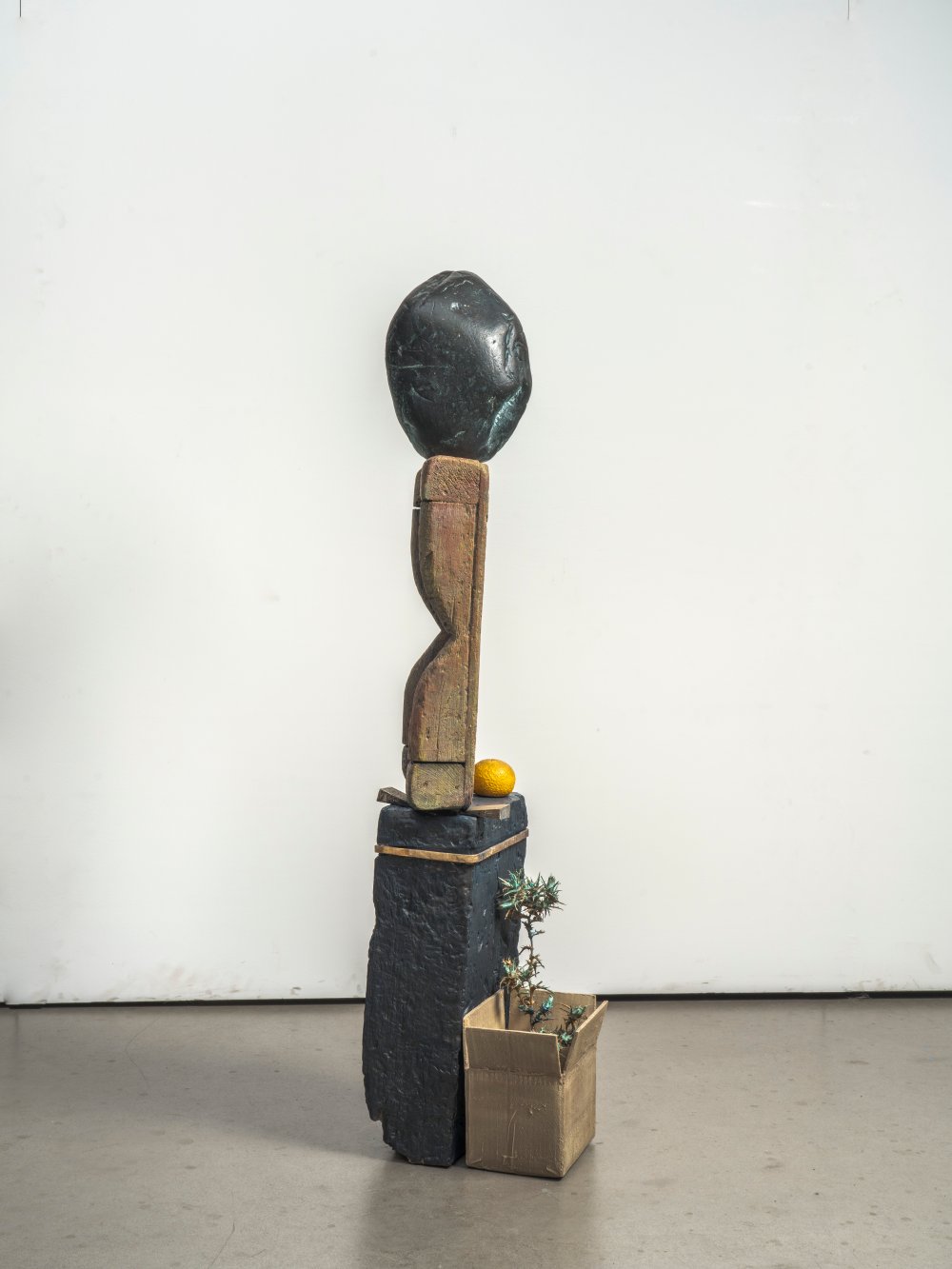 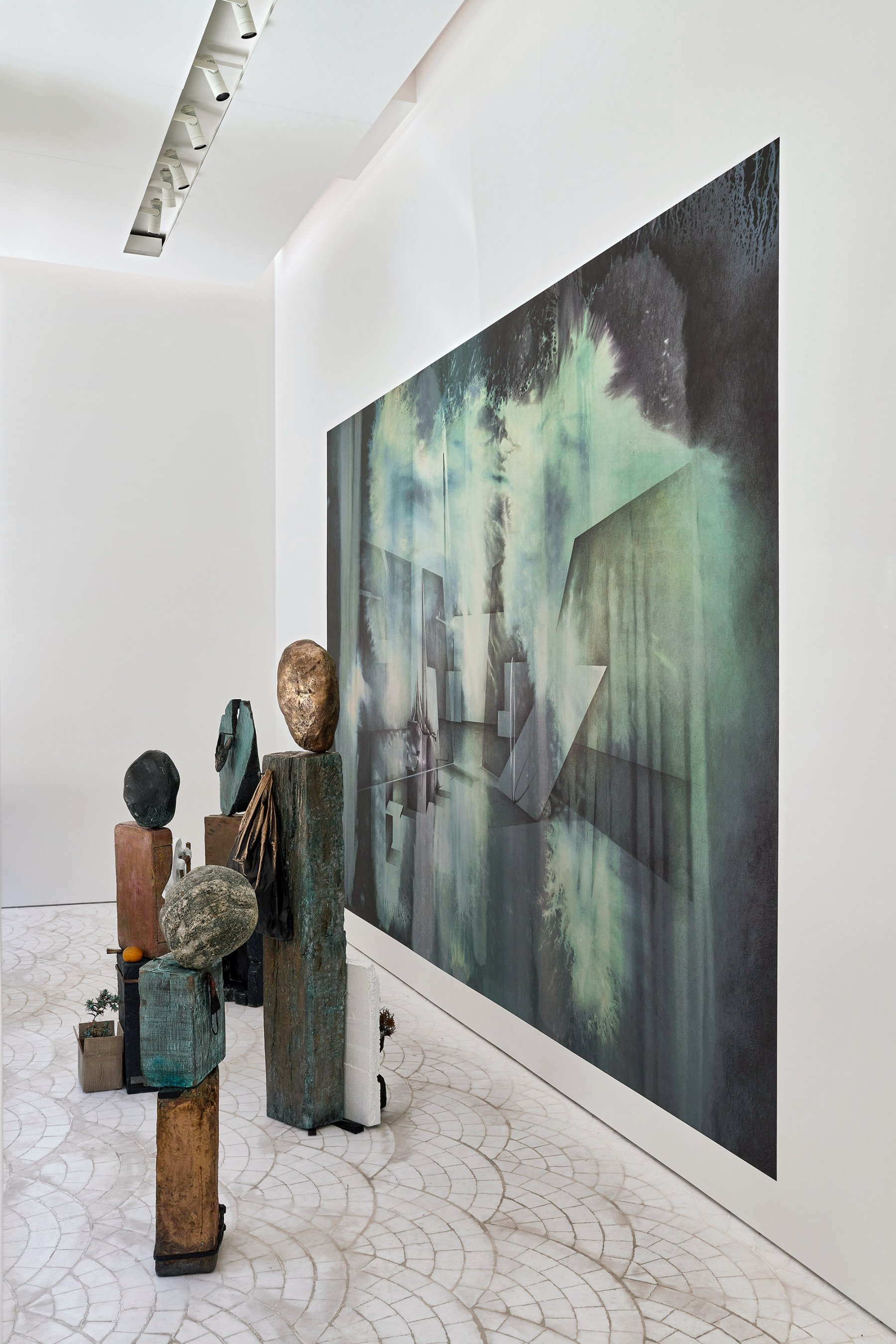 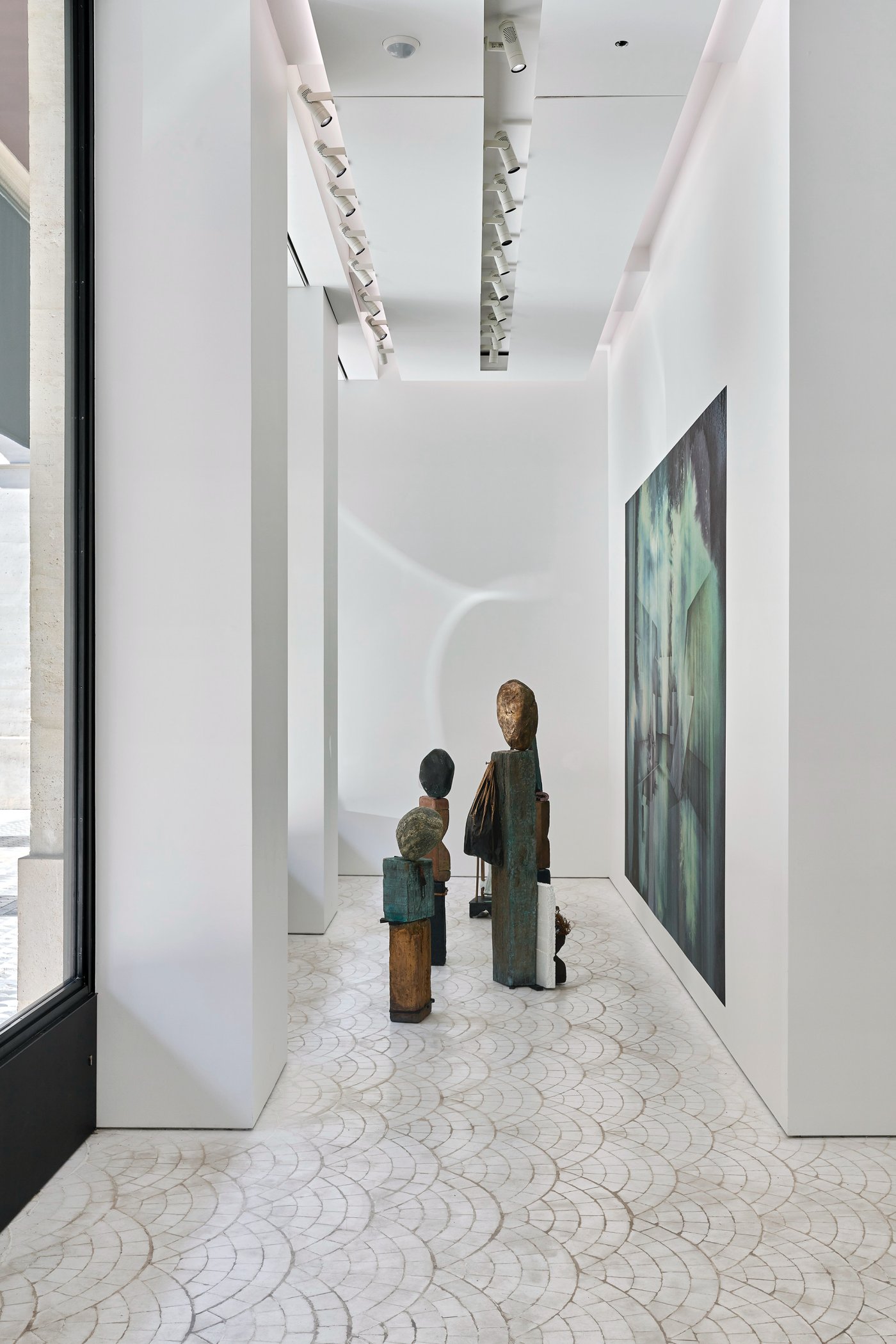 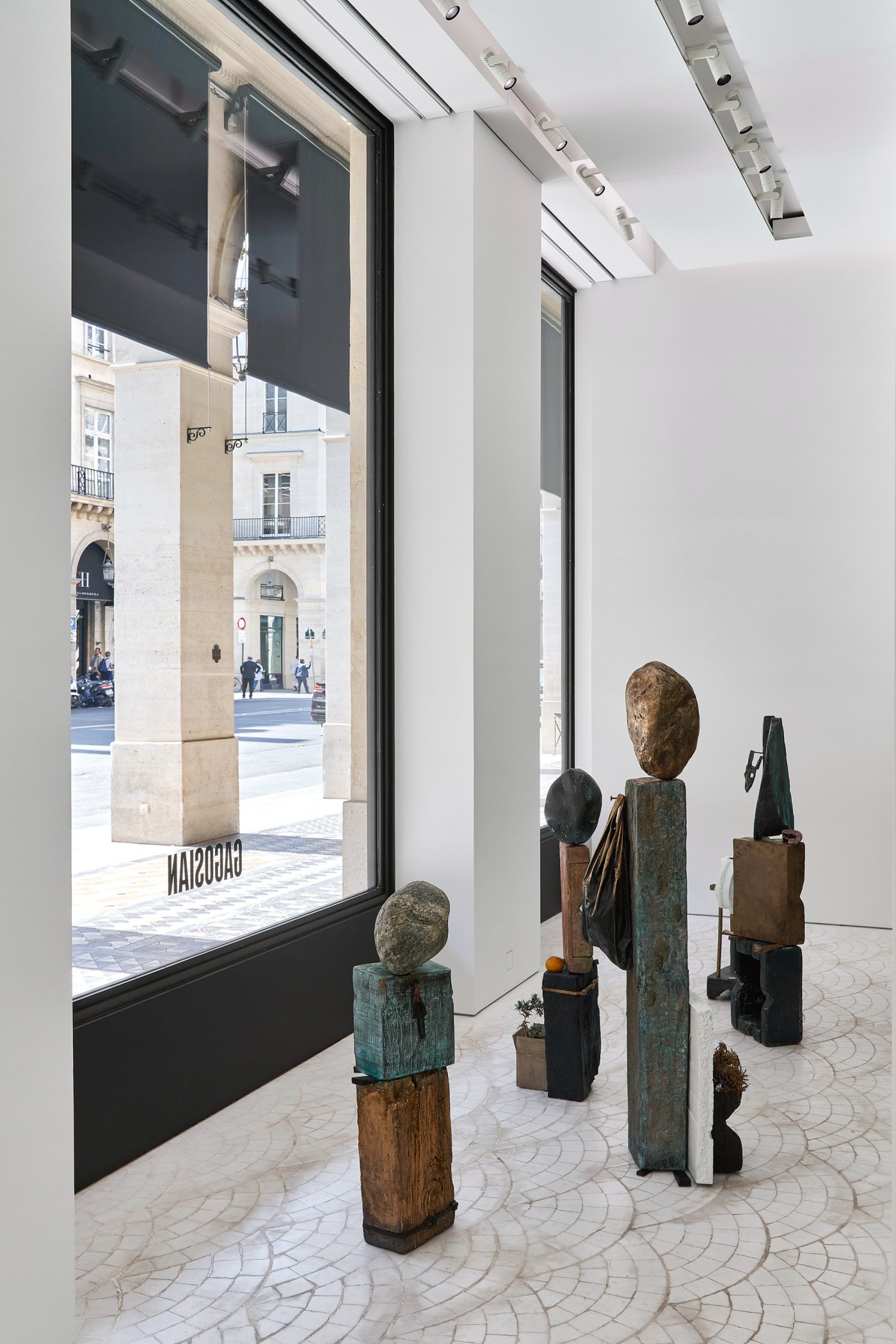 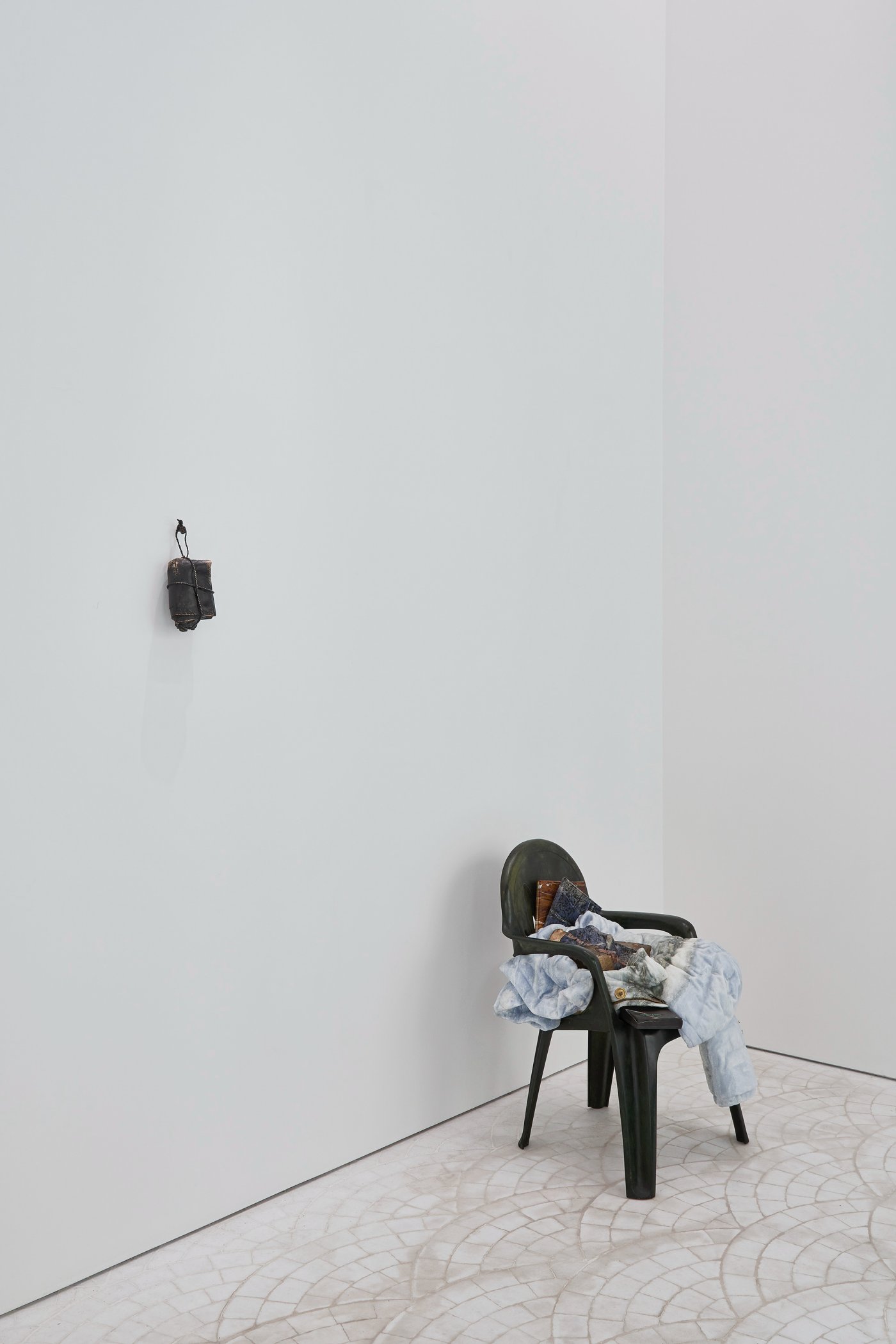 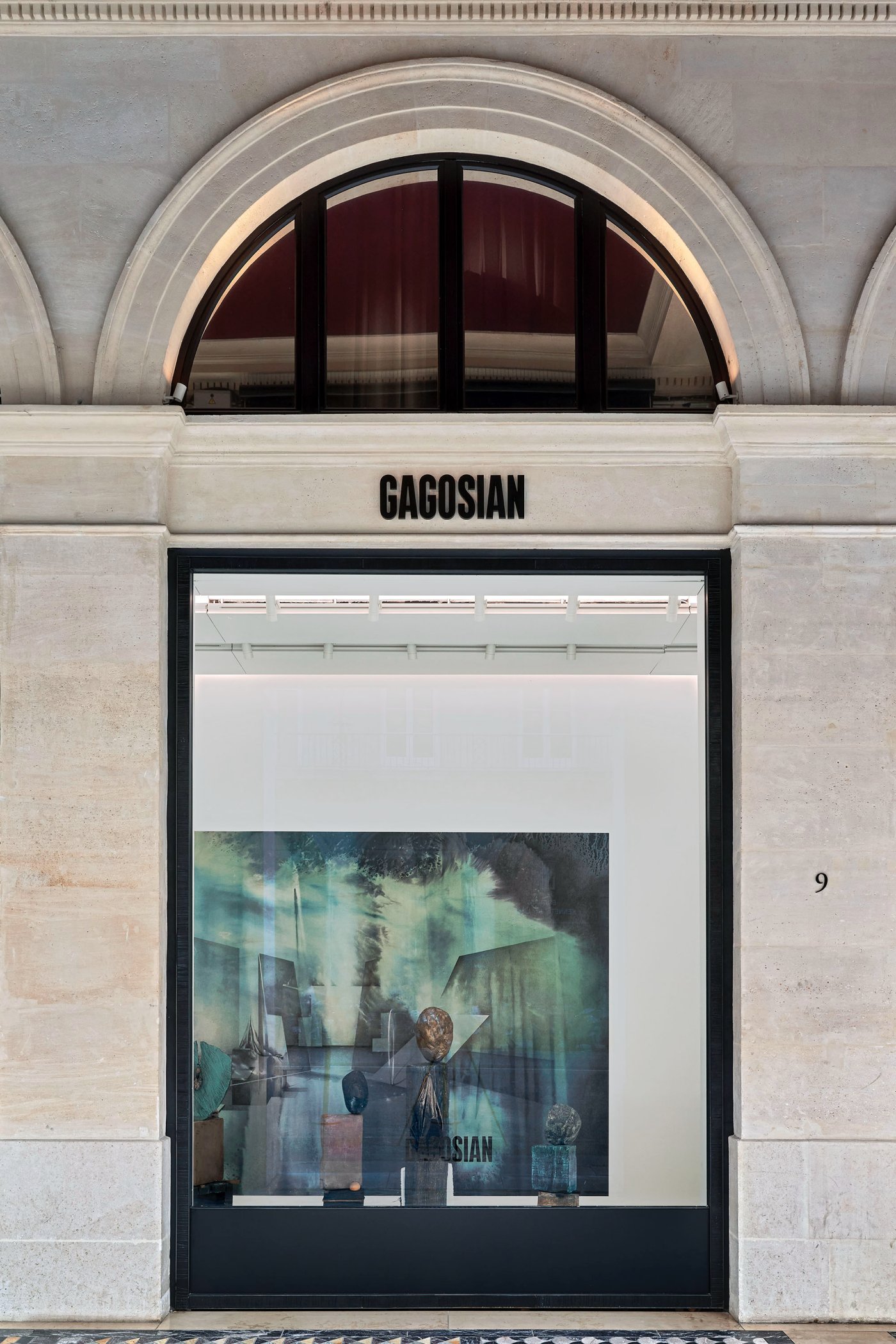 At rue de Castiglione, Gagosian is pleased to present an installation of new sculptures (all from 2022) from Trouvé’s Notes on Sculpture, a series she began in 2016, and The Guardian, a sculpture from a body of works initiated in 2013. These totemic works are arrayed in front of wallpaper that reproduces L’Escamoteur (The Illusionist) (2022)—a drawing that is featured in the Pompidou exhibition—at an expansive scale. At Gagosian, Trouvé takes advantage of the vitrine-like quality of the recently opened space with an installation that may be viewed at all times through its large windows.

The works in Notes on Sculpture function both as autonomous sculptures and as annotations to material and conceptual aspects of Trouvé’s practice. Blocks of wood and everyday objects—a cardboard box, thistle, sandal, flowers—have been cast in bronze, and pieces of fruit carved in stone. These disparate elements are stably composed but appear provisionally assembled and precariously balanced, shimmed with bronze wedges and wrapped by metal bands. One of the sculptures is an illusionistically painted bronze cast of a plaster mold and scaffolding that was itself used to make an editioned casting—a mysteriously oblique artifact of the sculpting process. The Guardian consists of a chair cast in bronze, a hooded jacket in marble, a cast-bronze mold that holds a carved sodalite reproduction of the positive form within, a lighter, and books about identity and multiple selves by Luigi Pirandello, Witold Gombrowicz, and Maria José (Fernando Pessoa).

Trouvé’s The Guardian and Notes on Sculpture both employ disparate objects to suggest the presence of figures who are paradoxically absent. Moreover, many of their elements are repurposed from other series, creating new works that point to physical and conceptual synergies throughout her oeuvre. These connections are reinforced by the wallpaper image of L’Escamoteur, a drawing from Les Dessouvenus, a series she began in 2013. The series title translates to “The Unremembered,” a Breton expression used to refer to people who have lost their memories. To make these works, Trouvé applies bleach to colored paper, which desaturates it in unpredictable ways, then draws on the resulting shapes in pencil. The ambiguous perspectives of this image conjure the linear and planar forms of her installations, suggesting an exhibition space as well as a studio interior. Notes on Sculpture also shares its title with an influential group of essays written by artist Robert Morris from 1966 through 1969 that considers the process of making and viewing sculptures in phenomenological terms. Investigating possible means of conceiving art, Trouvé moves beyond notions of formal autonomy, introducing instead a sense of marvelous disorientation and discovery.

The Centre Pompidou will publish a catalogue for Le grand atlas de la désorientation, designed in collaboration with Trouvé. It includes 250 drawings from 1990 to today, accompanied by essays by Laura Hoptman, director of the Drawing Center, New York, and Jean-Pierre Criqui, curator of the exhibition.