David Richard Gallery presents Rising Tides and Fragile Hope by Monroe Hodder, her second solo presentation with the gallery. The presentation showcases a new book of paintings on paper comprised of 8 oil paintings over watercolor on rag paper, each measuring 11 x 12 inches and all bound together in a handmade book with a front and back hard cover for presentation and leafing through. 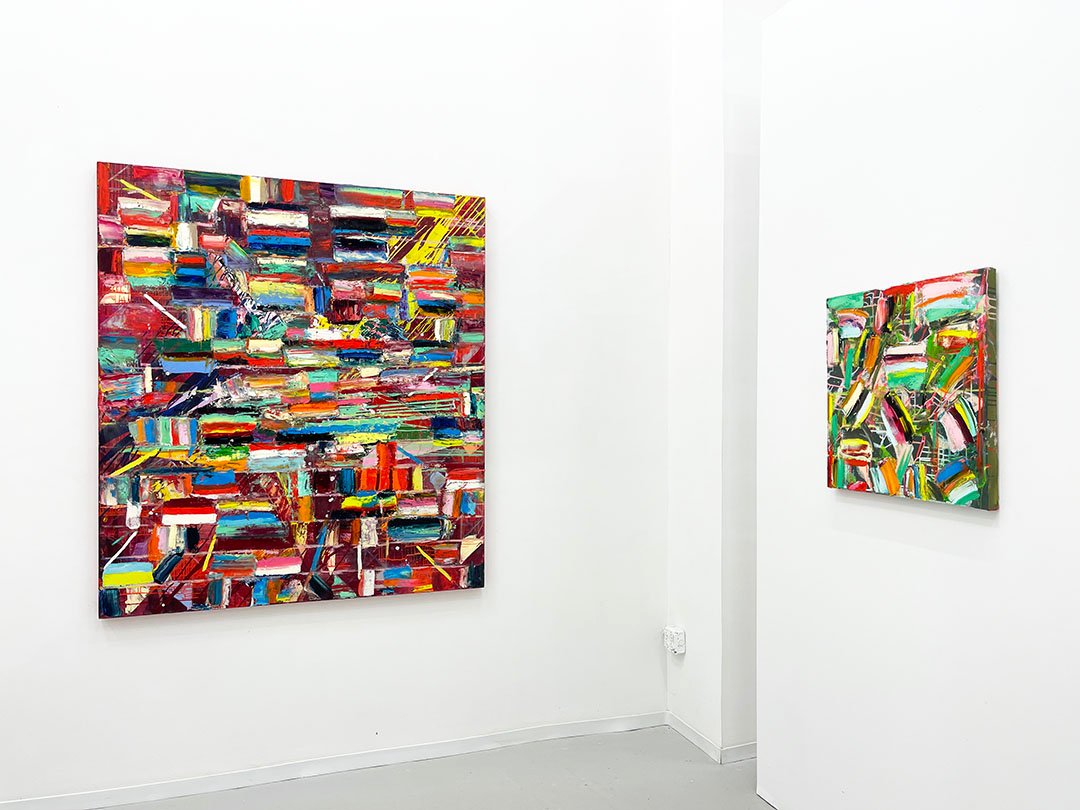 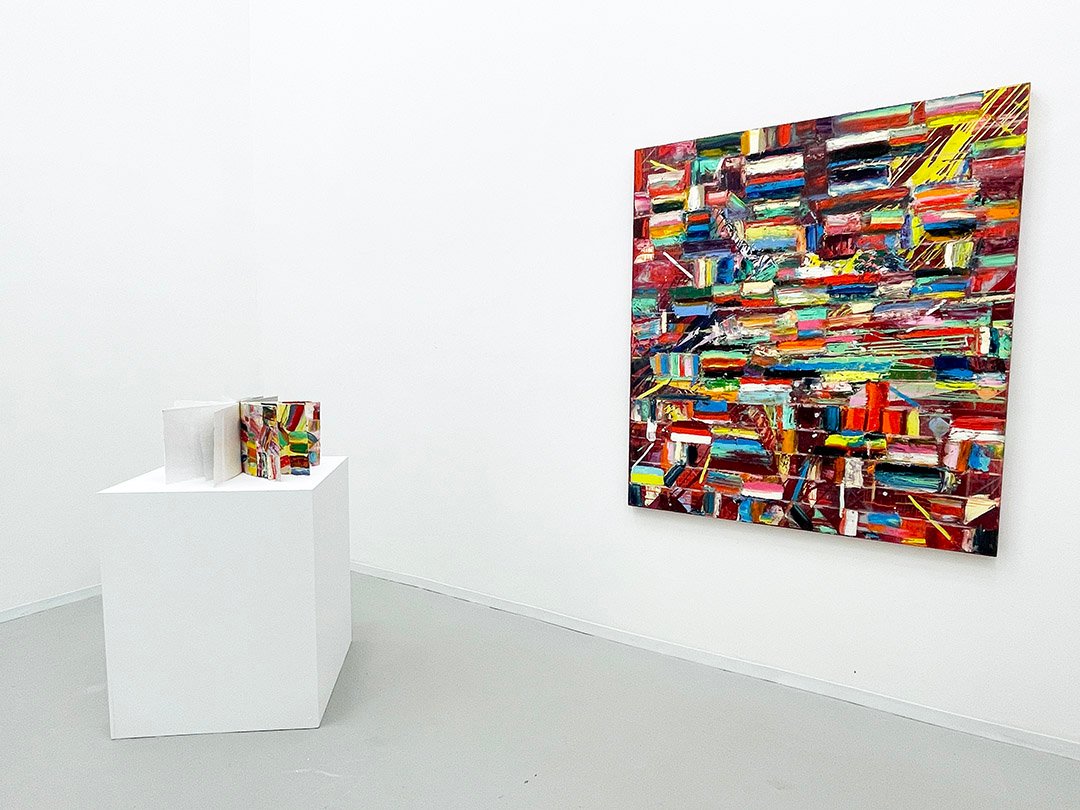 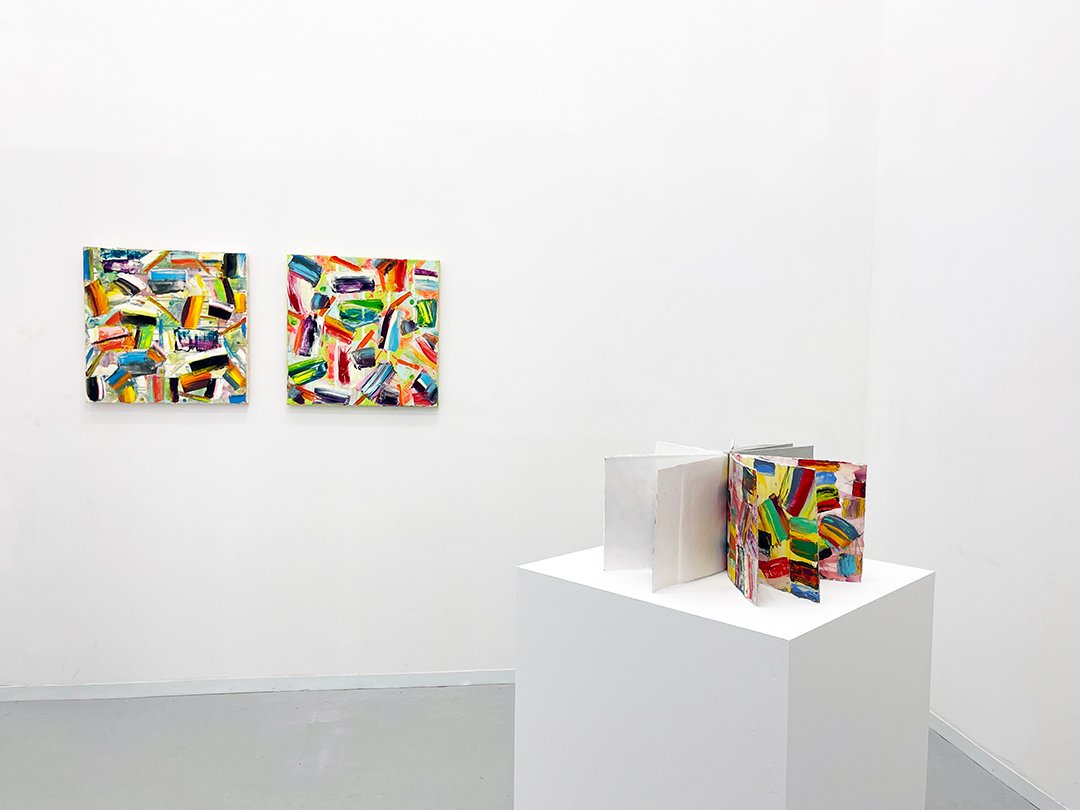 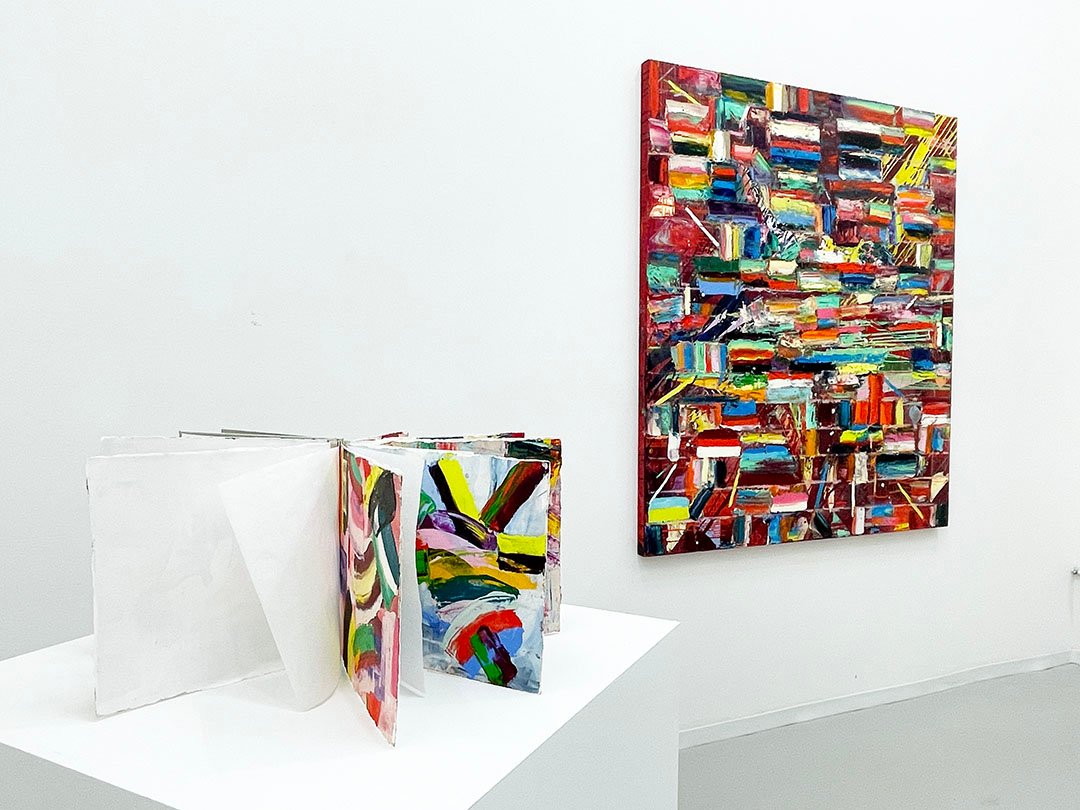 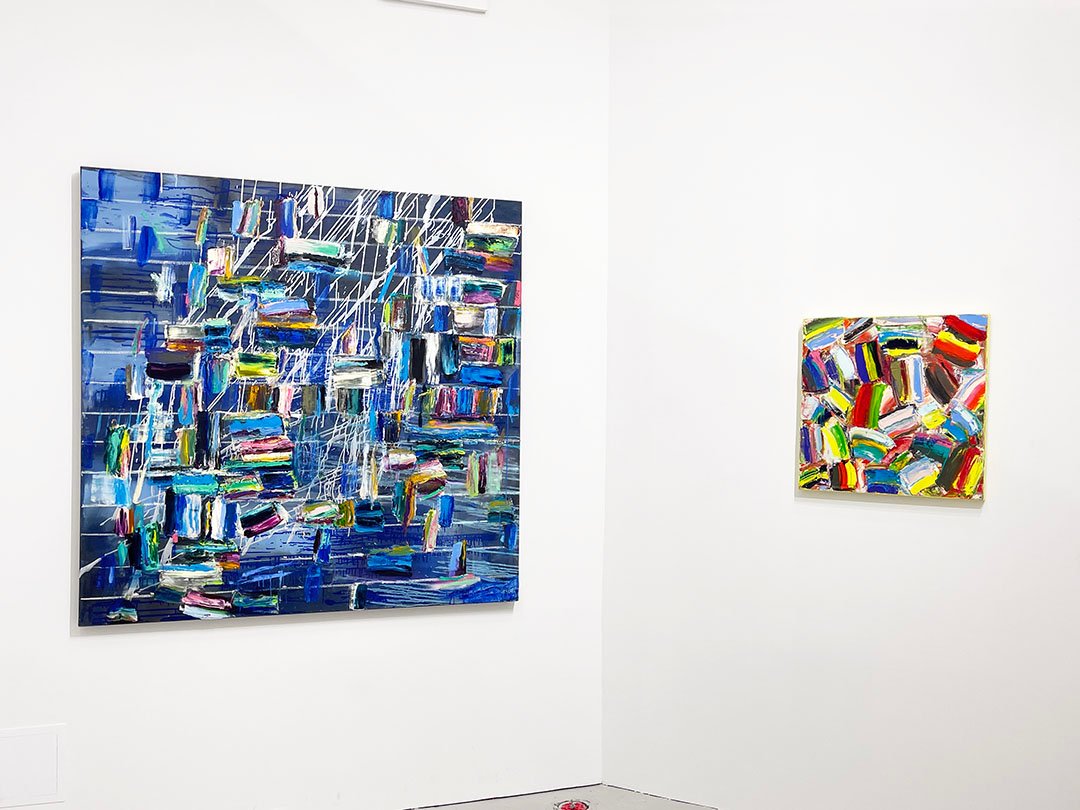 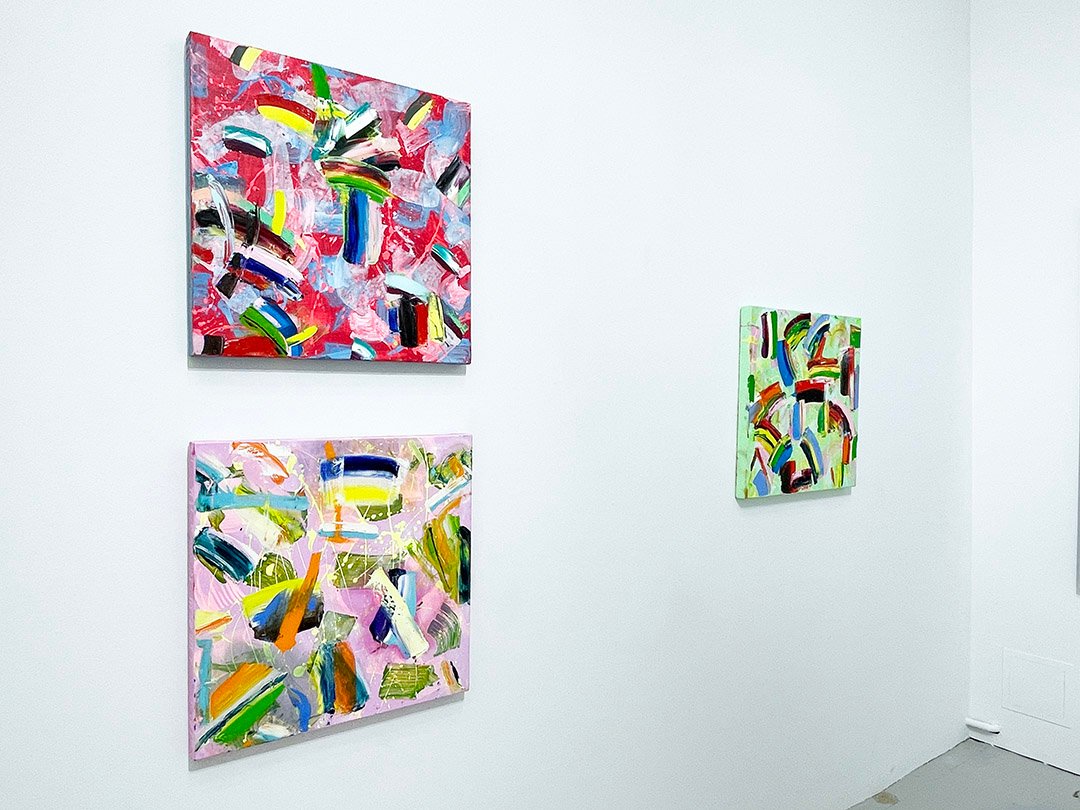 Hodder loves the power of words and the concept of a book. However, she believes in the power of art even more. Rather than use a book as a medium to reproduce and disseminate her artworks, she decided to create a book of original oil paintings and let them speak for themselves. The non-objective abstract imagery is powerful on its own with gestural strokes and bold colors, each conveying a unique temperament and viewing experience. Thus, written descriptions are not required and the viewer’s interpretation is the best description possible. In the artist’s words, “I feel convinced by the power of art to reach us directly, viscerally, and spiritually with its force of form and color and space.”

Hodder sees her paintings as a montage of many small paintings together. The geometric overlay and patchwork compositions are like separate individual paintings aggregated together in one large composition. She loves to work with oil paint, applying thick impasto mixtures of color either as stripes or small patches mixed wet on wet, or using a palette knife to pull and mix as the paint moves across the canvas.

Rooted in color theory, Hodder is highly intuitive with color selections, often breaking with tradition and certain rules, there is a rigor in her compositions as the small paintings (think of them as motifs, footprints or icons, depending upon your art historical orientation) are highly orchestrated in a way that also nods to the rigor of pattern painting. Hodder thinks of herself as a geometric abstractionist exploring bands of color in mostly rectangular constructs that can be considered non-objective abstractions or hinting at landscapes and seascapes with the color borders of the two bands in the center functioning as a horizon line to ground the individual mini-sized paintings. Her process includes addition and abstraction of pigment, it is painstaking and also involves an all-over ground painting of dilute and stained acrylic pigment with the overlay and detail of impasto oil pigment. Hodder likes structure in her paintings, both to organize and navigate the calm patches and active strokes as well as the placement and movement of colors within the compositions.

The grounds are dilute acrylic paint with a heavy dose of hot fluorescent pigment, they are fluid, lyrical, rhythmic, usually poured and moved around by tilting the canvas. Think of the grounds as “feminine”.

The oil overlays are individual rectangular patches (recall, a mini painting) that explore a tangent or urge, usually involving the lushness of the medium and making bold statements with a stroke of pigment that ultimately results in a stripe or geometric block. Each block must work in the broader context of the composition. Think “masculine.”

The paintings and compositions are full of contrasts and binaries: the under paintings vs the surfaces; dilute grounds vs lush impasto surfaces; lyrical grounds and geometric overlays; masculine vs feminine; primary vs secondary colors. The result is an initial impact of color and geometry, while the density of detail engages the viewer and provides nuance and distinction to each work through harmonized color palettes, movement across the canvas and a repetition of certain blocks of color and motifs.

Monroe Hodder began to paint while living in California and received an MFA from the San Francisco Art Institute in 1983. For ten years, she was on the art faculty of several colleges and universities in the Bay Area, curated exhibitions, was an art critic for West Coast publications and represented by several galleries in San Francisco.

Hodder lived and worked overseas in Russia and England and was a Visiting Artist at the American Academy in Rome on five different occasions. She has had residencies in Iceland and Nantucket and was granted a UK Artist Resident Visa followed by British citizenship in 2005. She has exhibited her paintings widely in the US and internationally, including in Italy, Korea, France and the UK.

Moving from London to New York in 2012, Hodder recently had solo exhibitions in galleries and art centers in Chelsea and the Lower East Side of New York as well as in London, Denver, Los Angeles, St. Louis and Portland, OR. Her work has been published in several art books and magazines and she was interviewed on PBS TV.

Close to fifty reviews have been written about Hodder’s work and she is in numerous corporate and private collections. Eight paintings by Hodder are held in museum collections. She is represented by Havu Gallery in Denver, CO, Belgravia Gallery in England, Butters Gallery in Portland, OR and the Oehmne Print Center in Steamboat, CO.