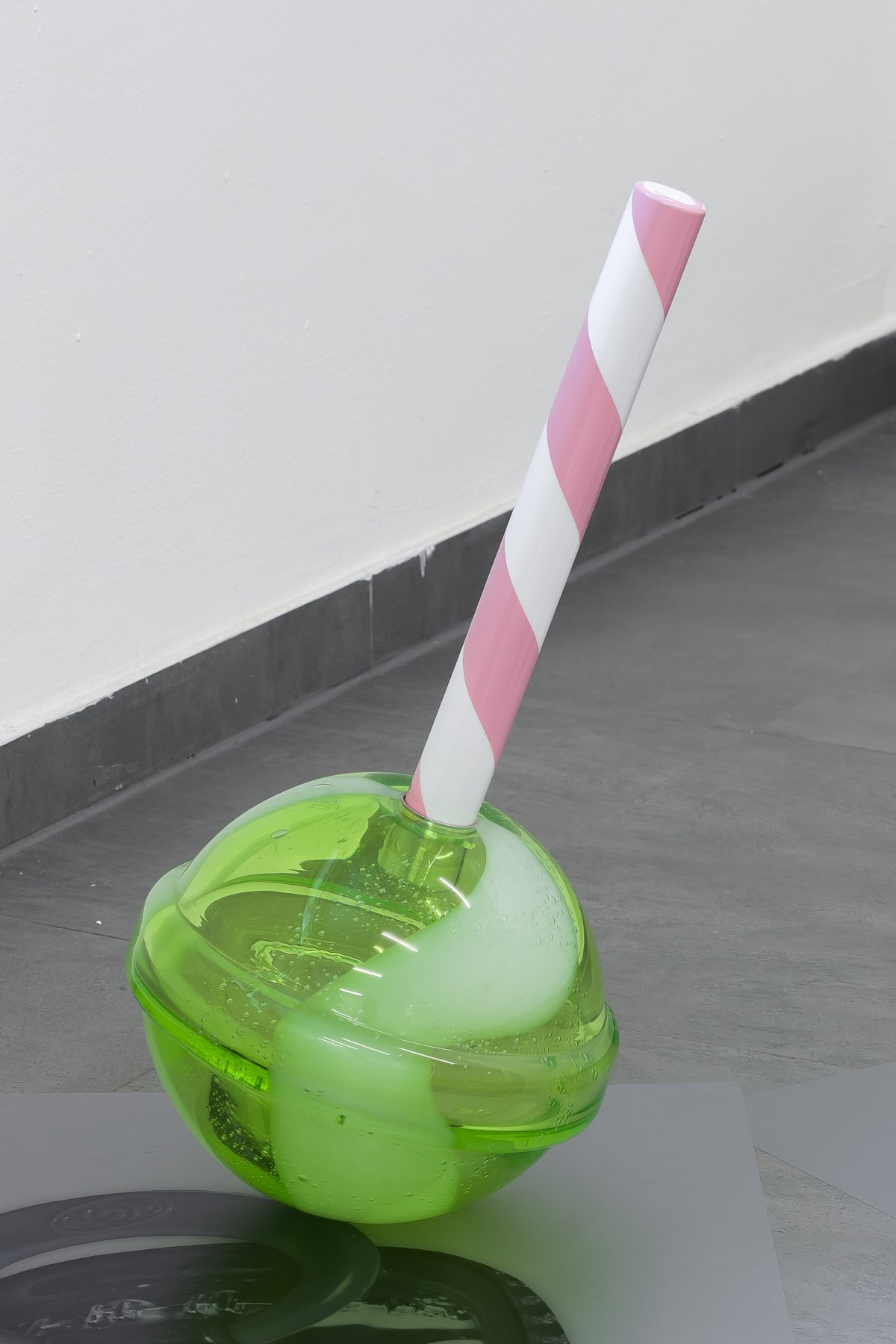 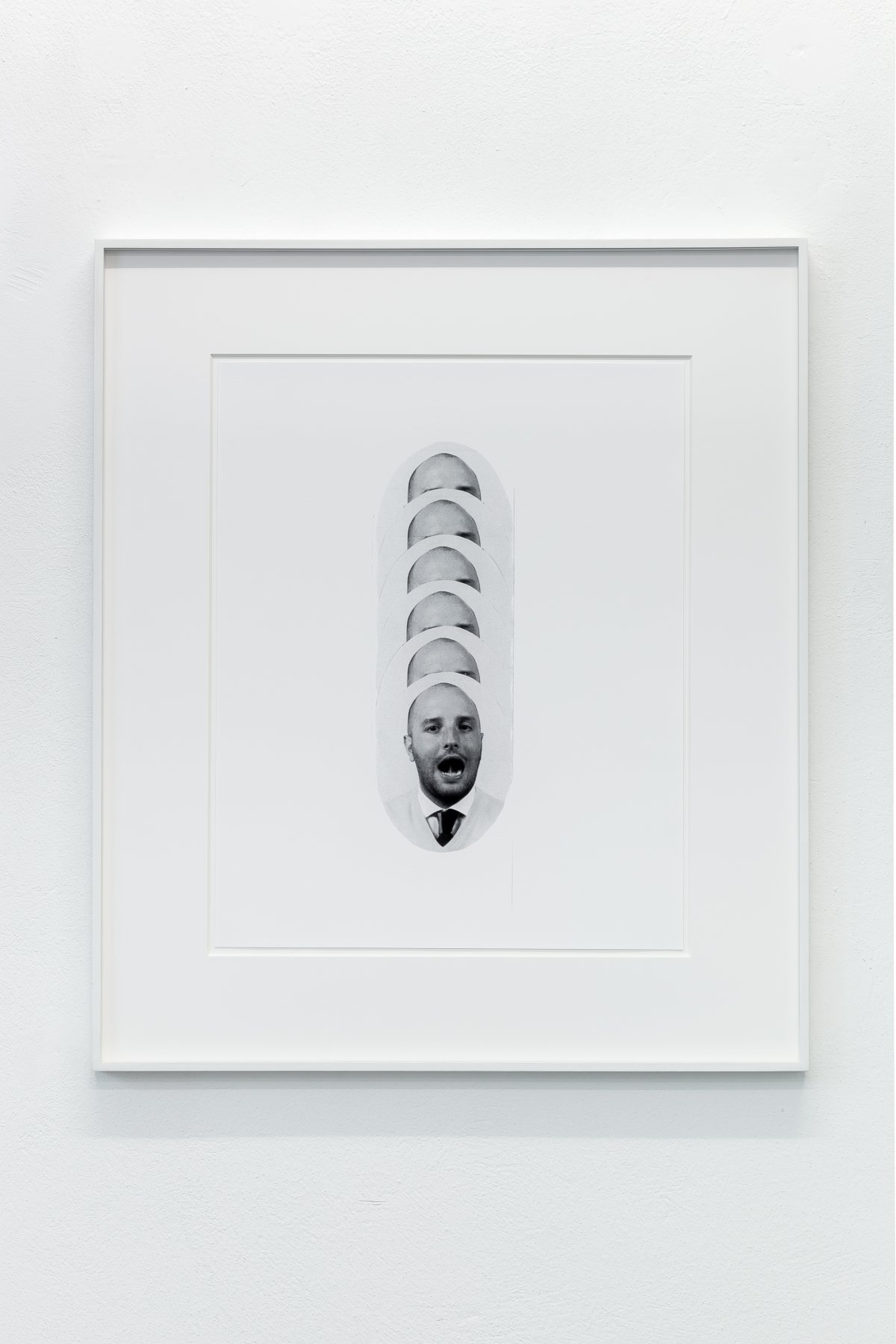 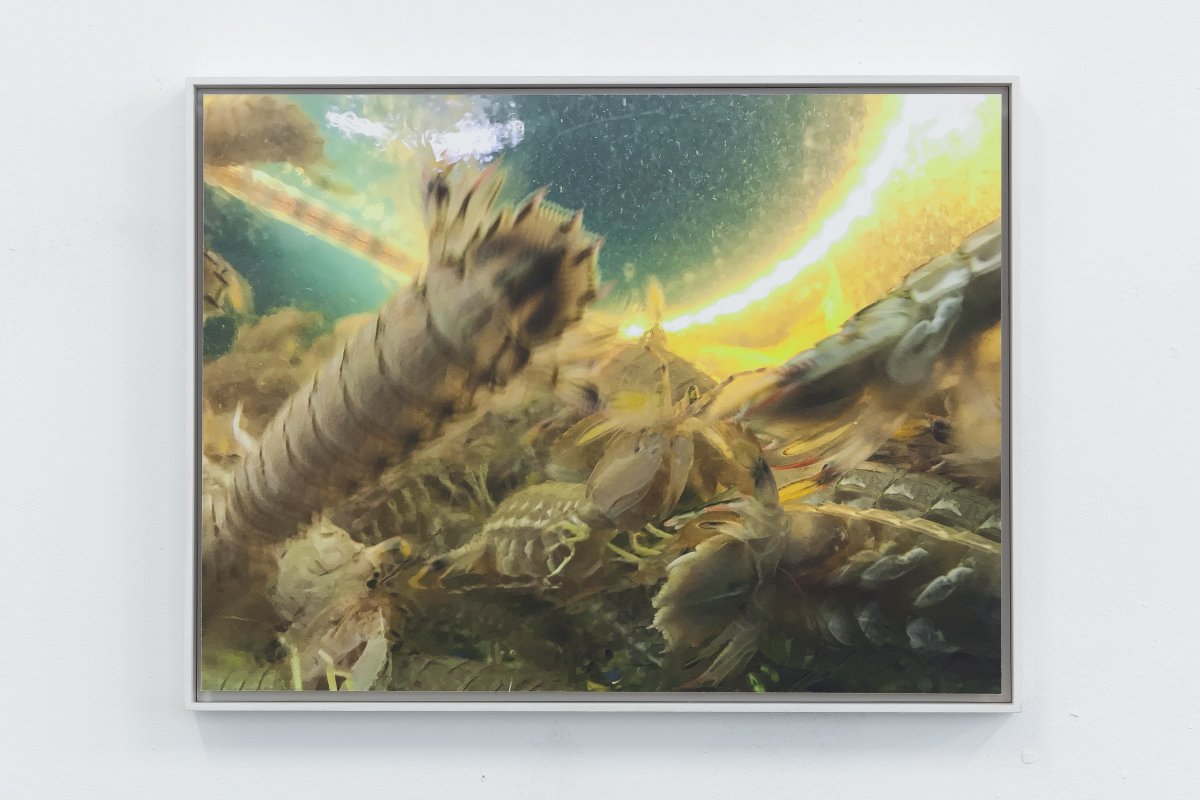 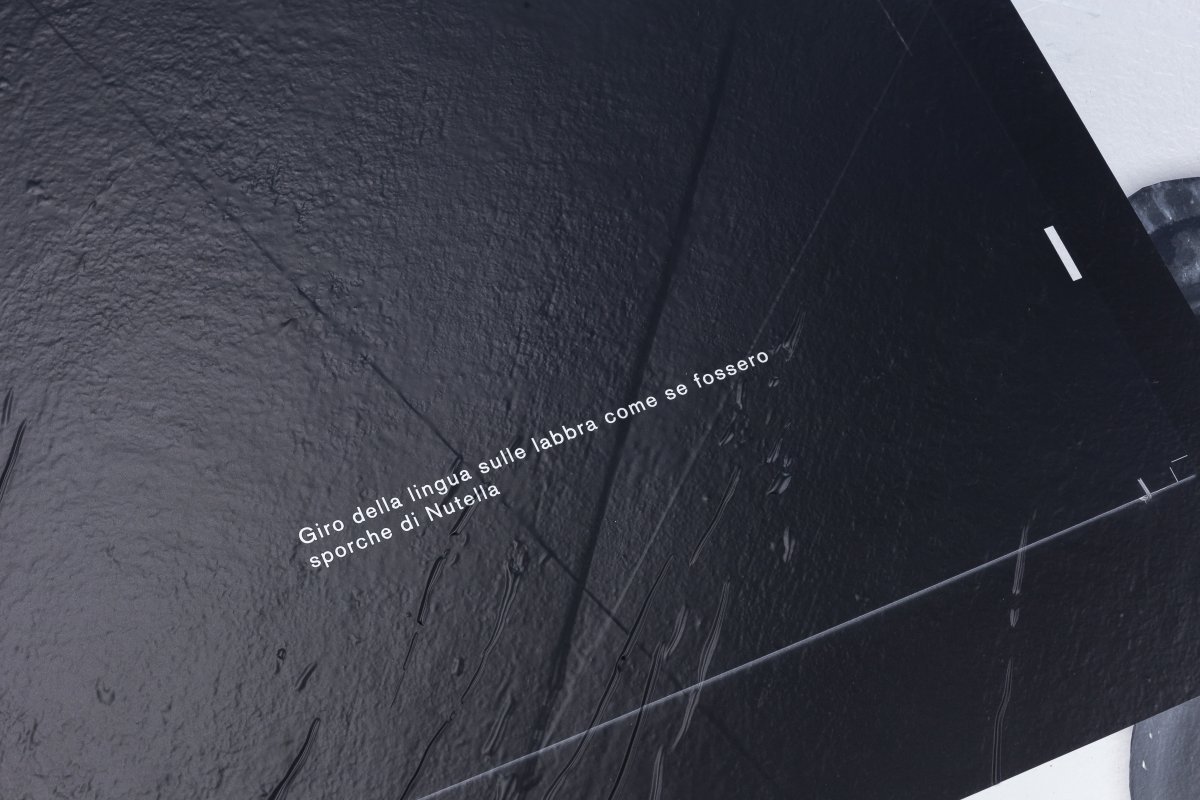 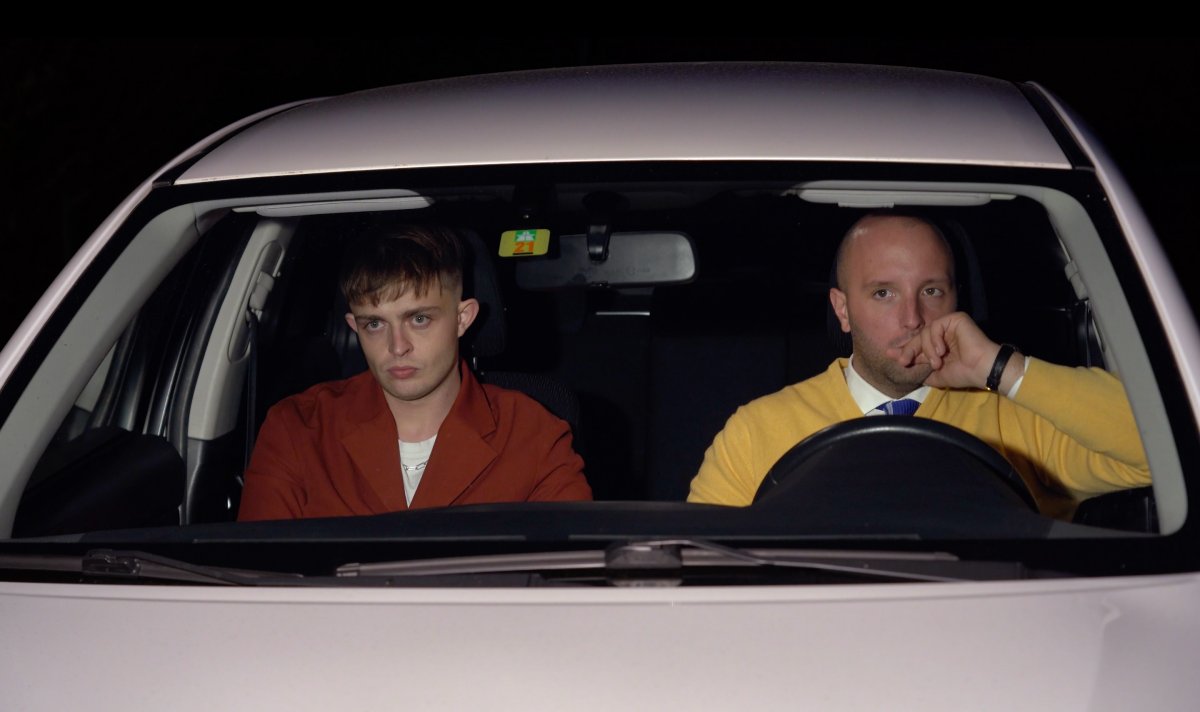 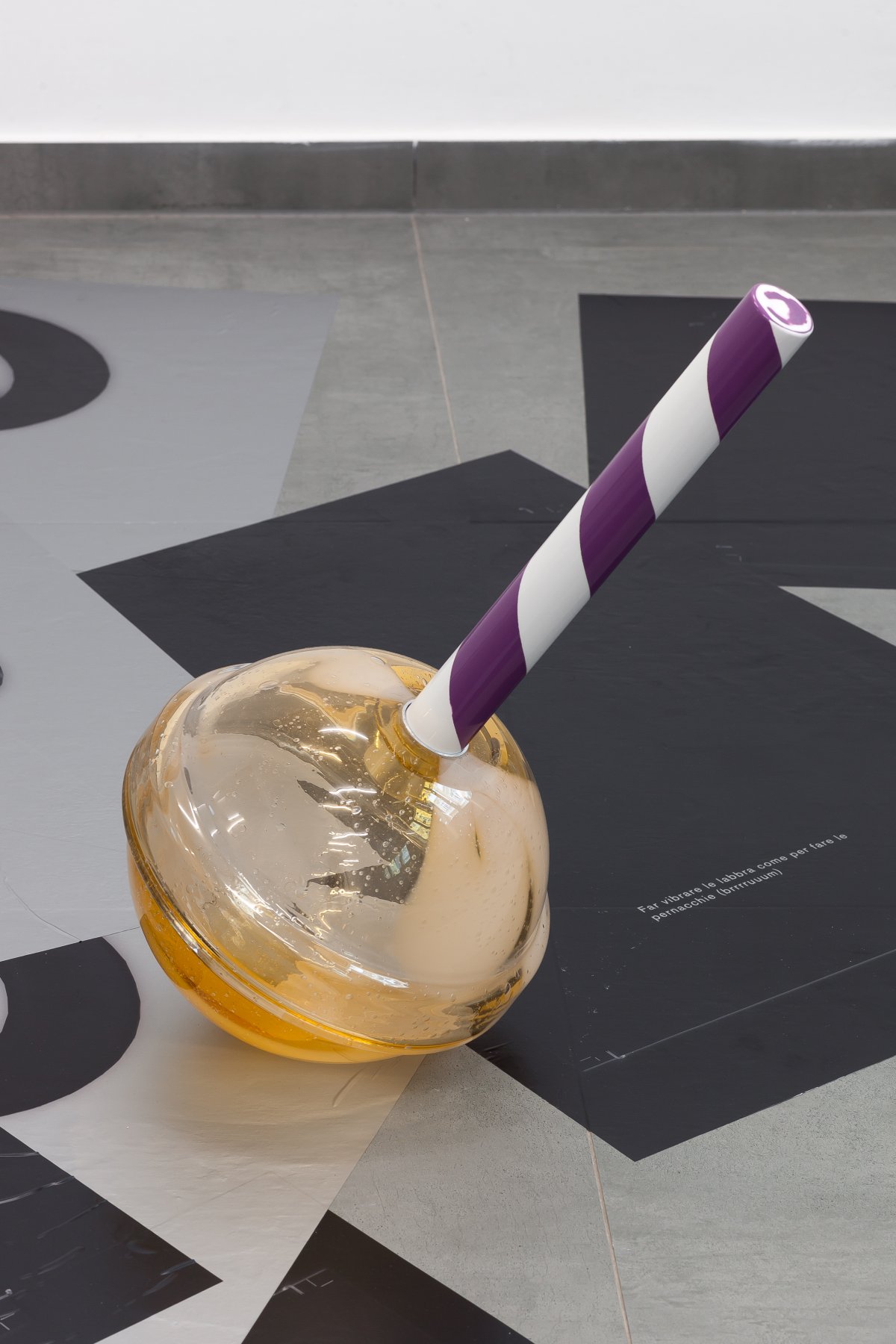 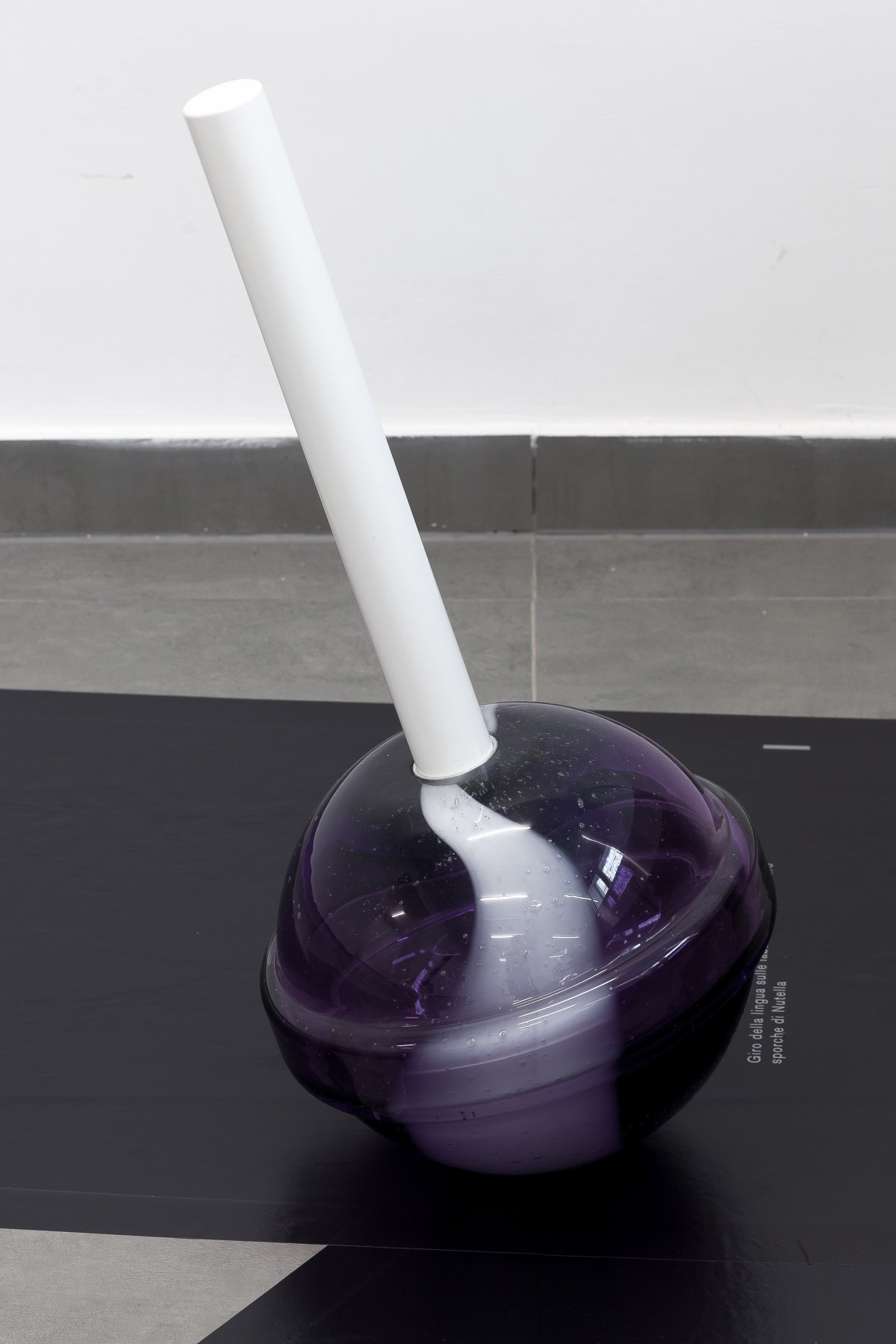 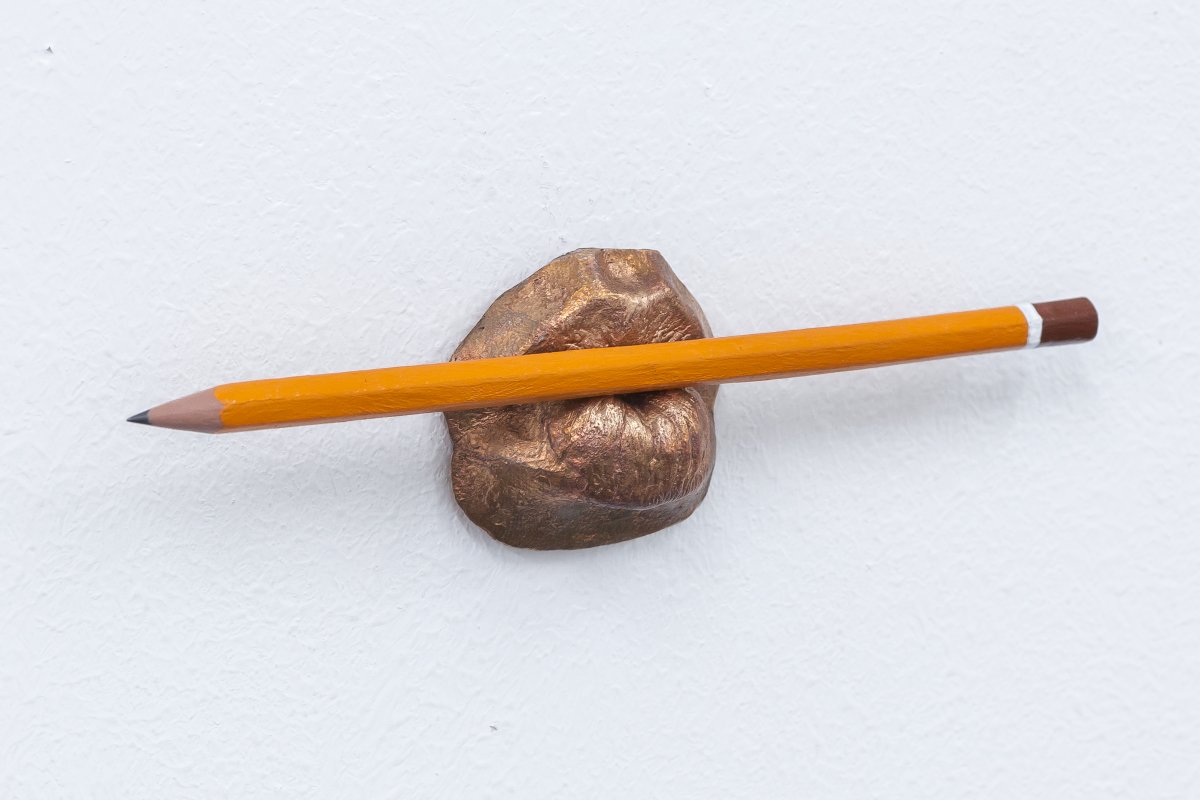 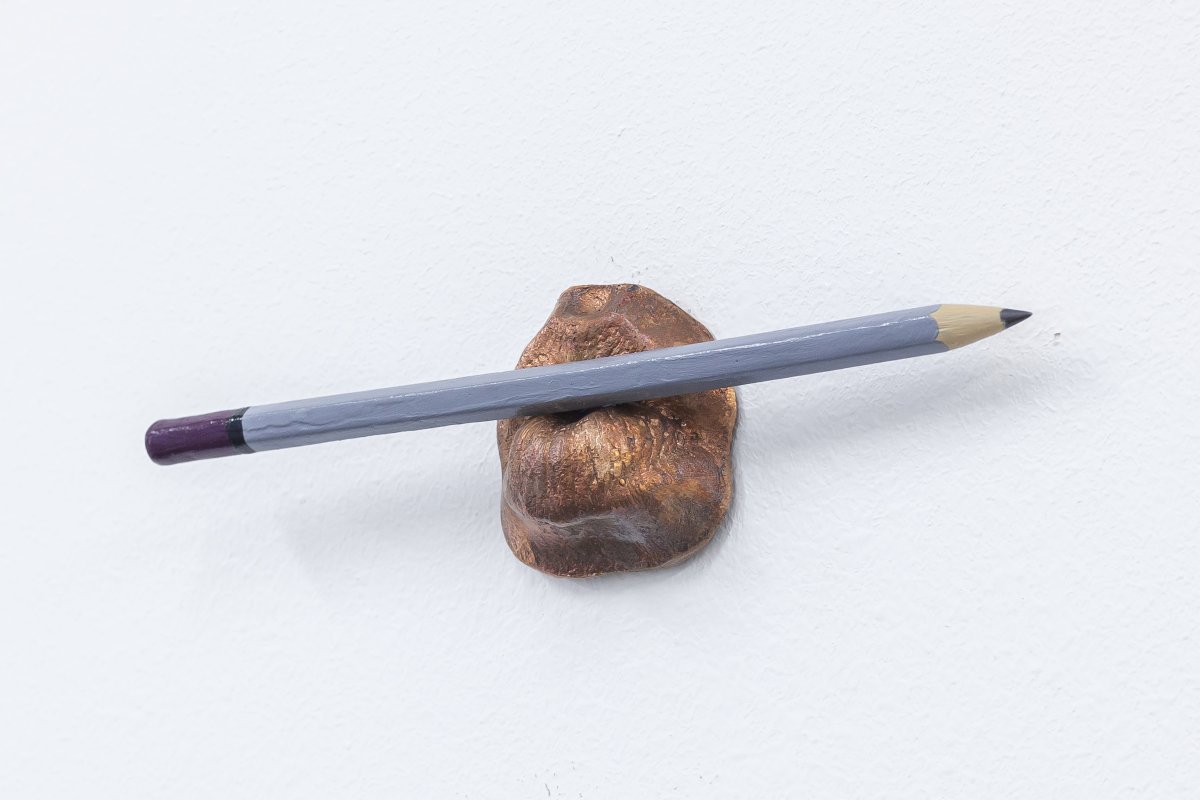 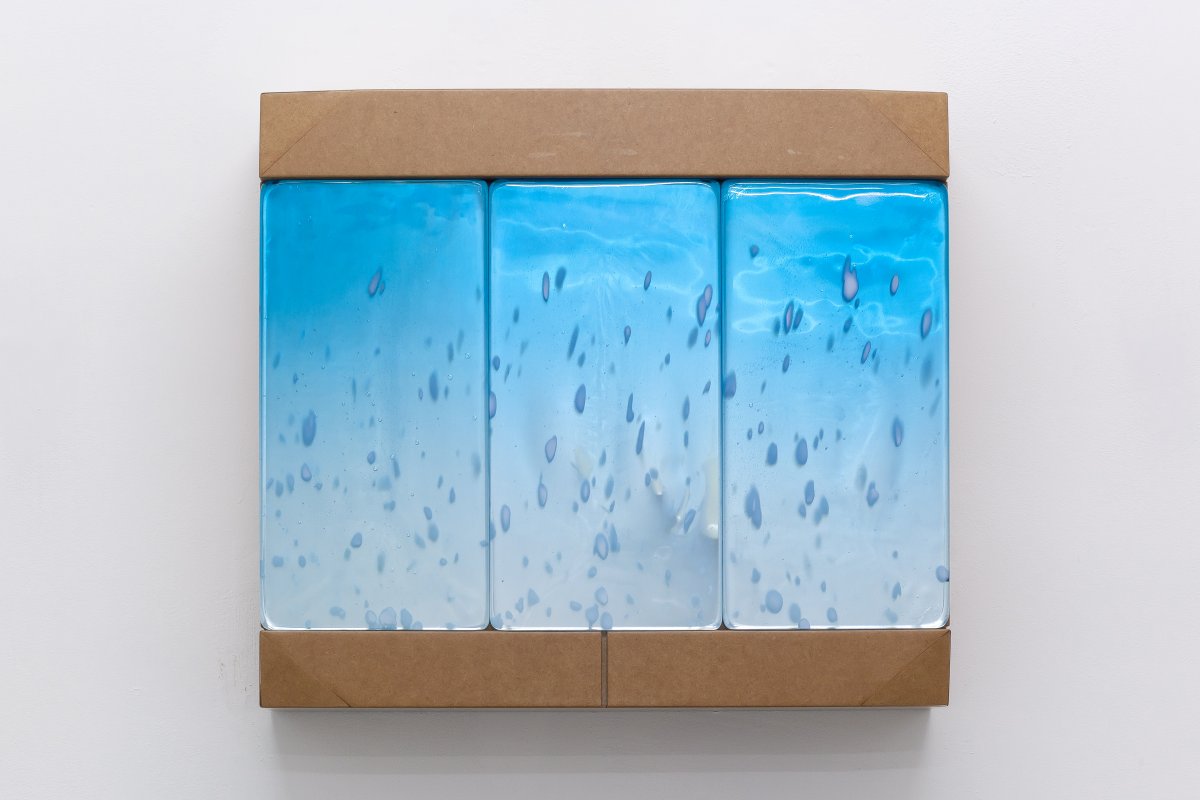 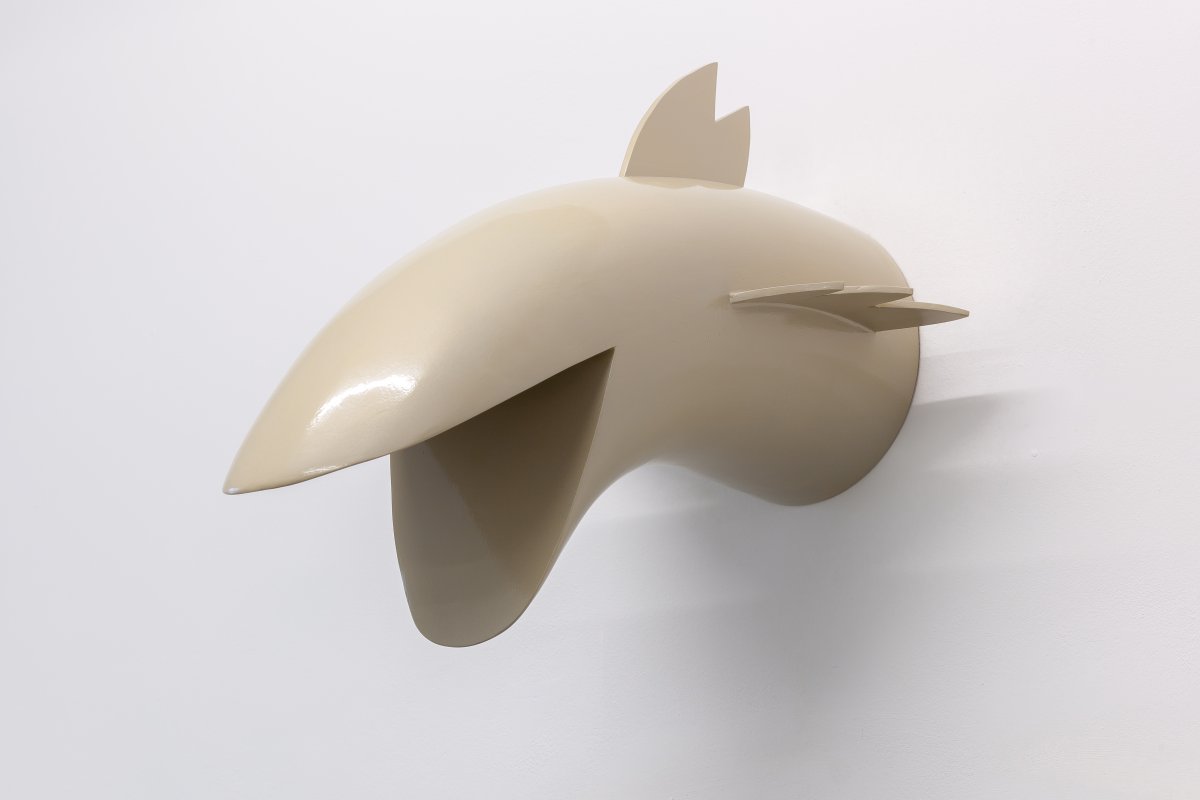 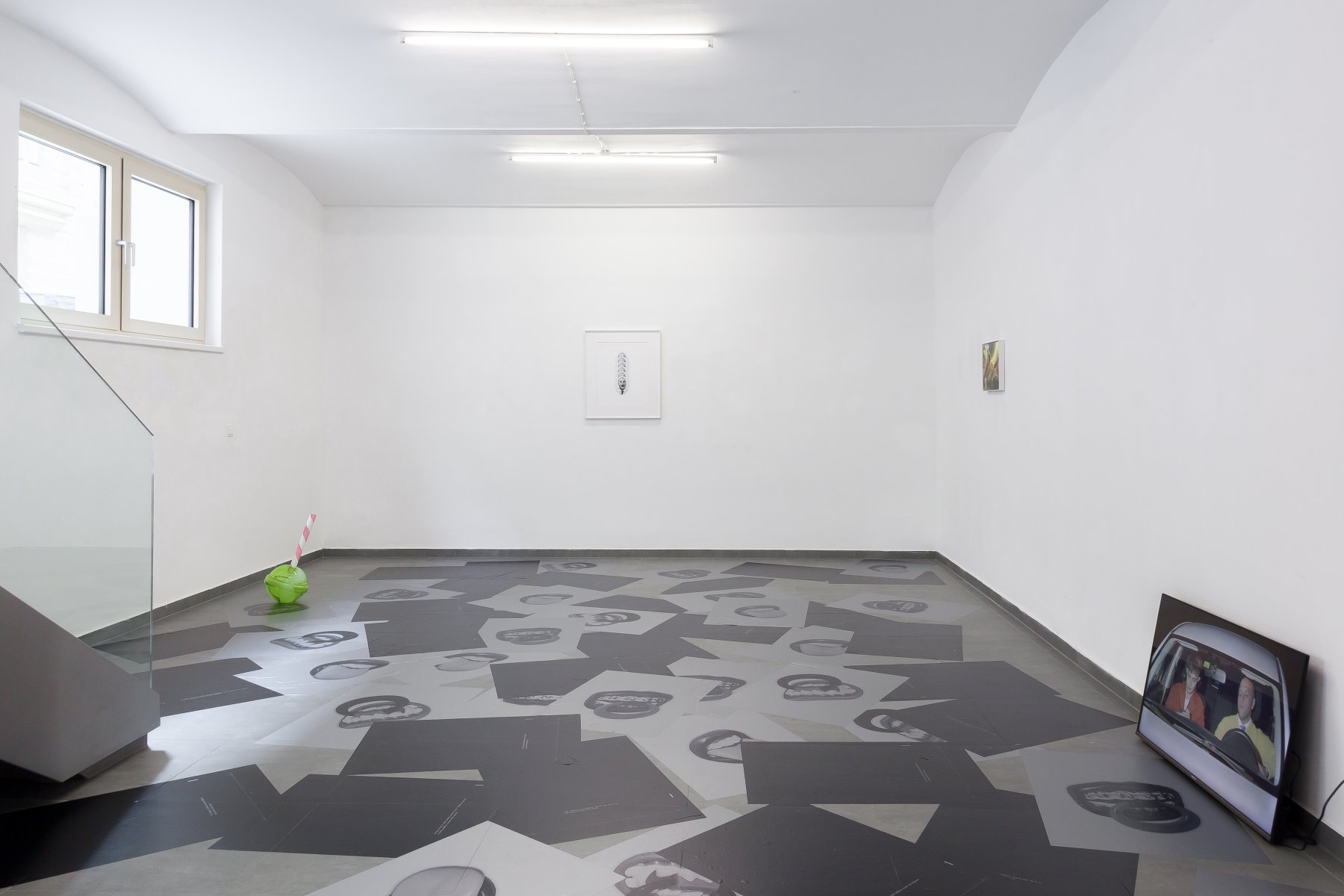 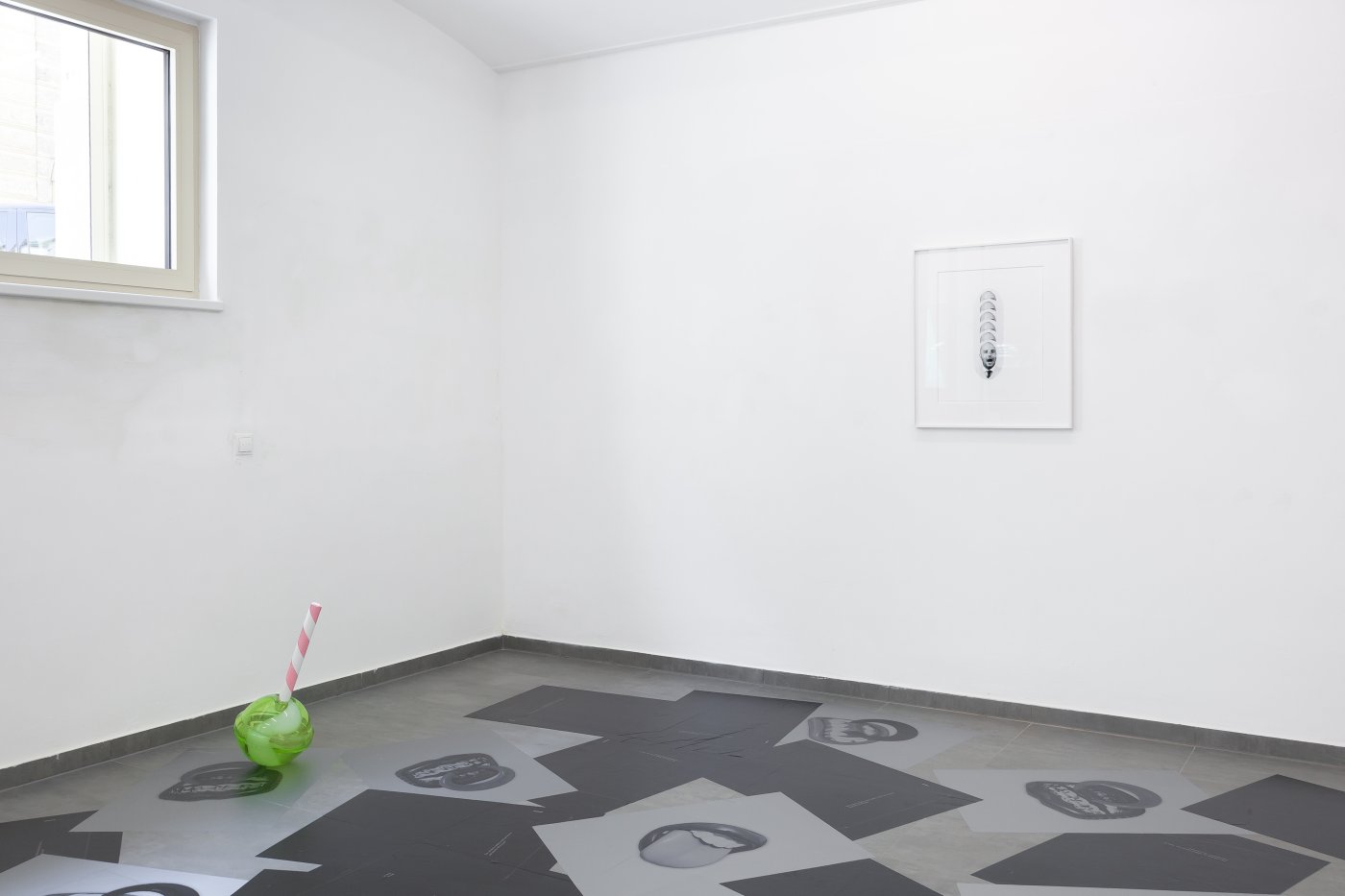 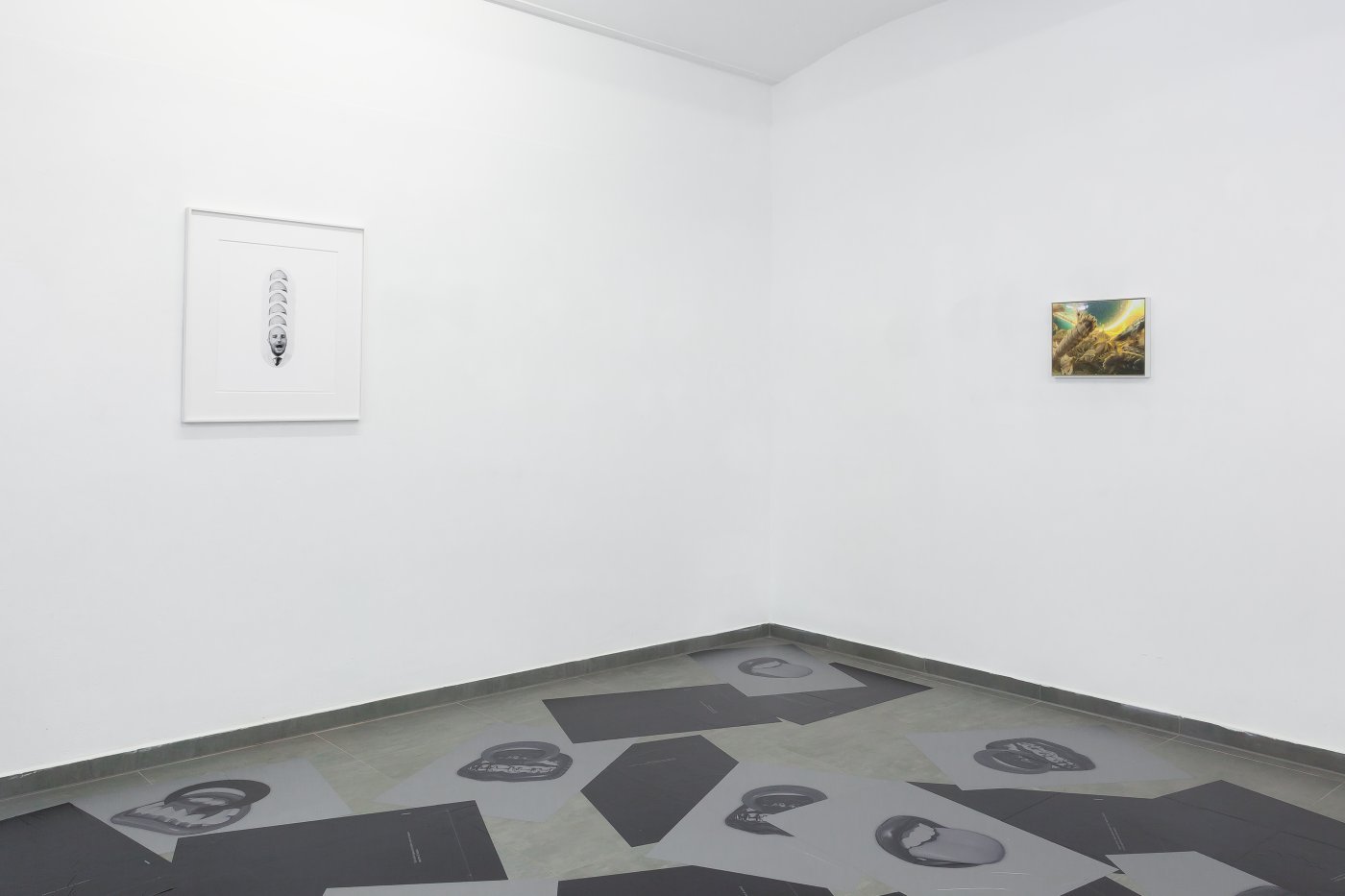 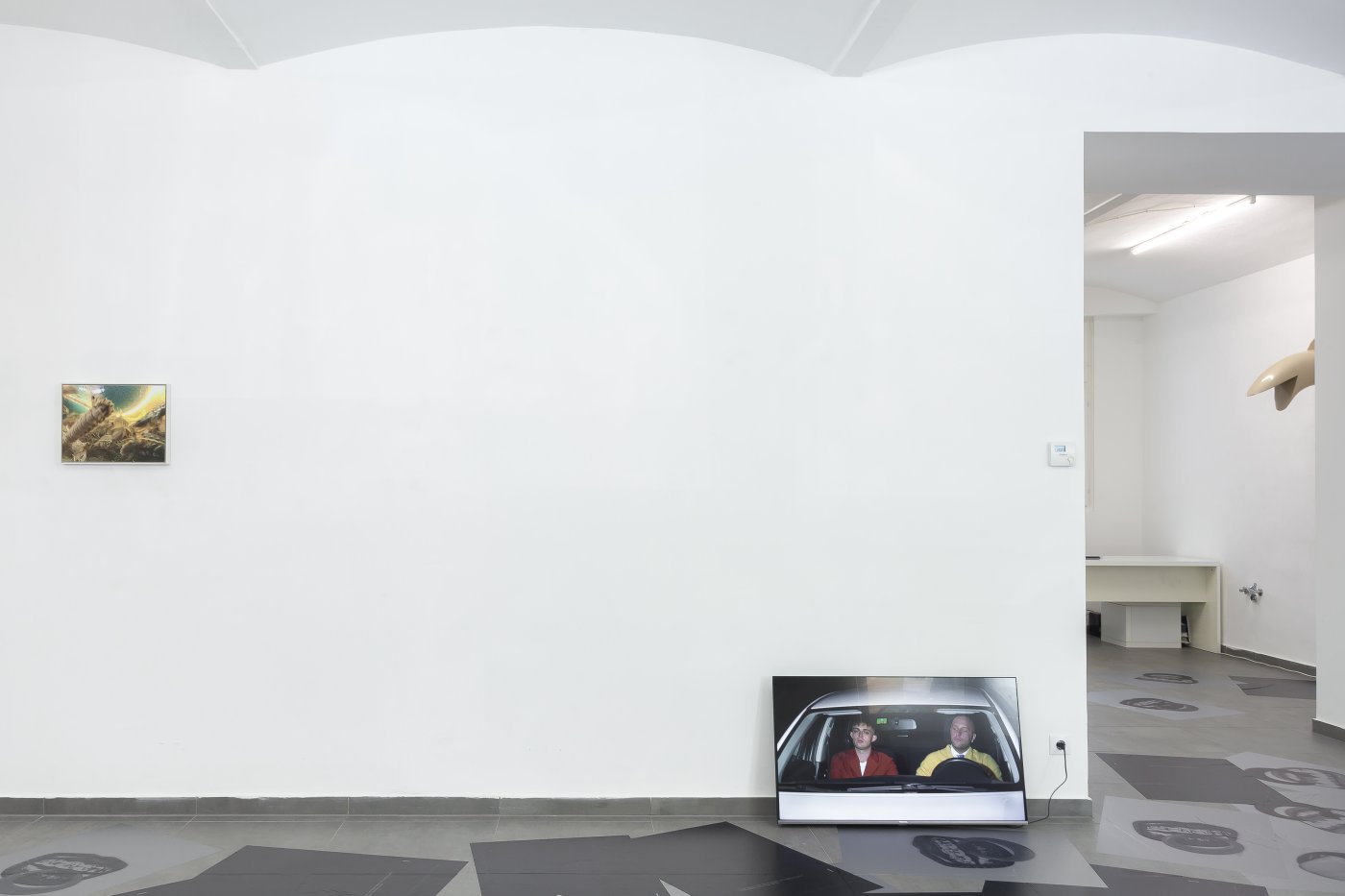 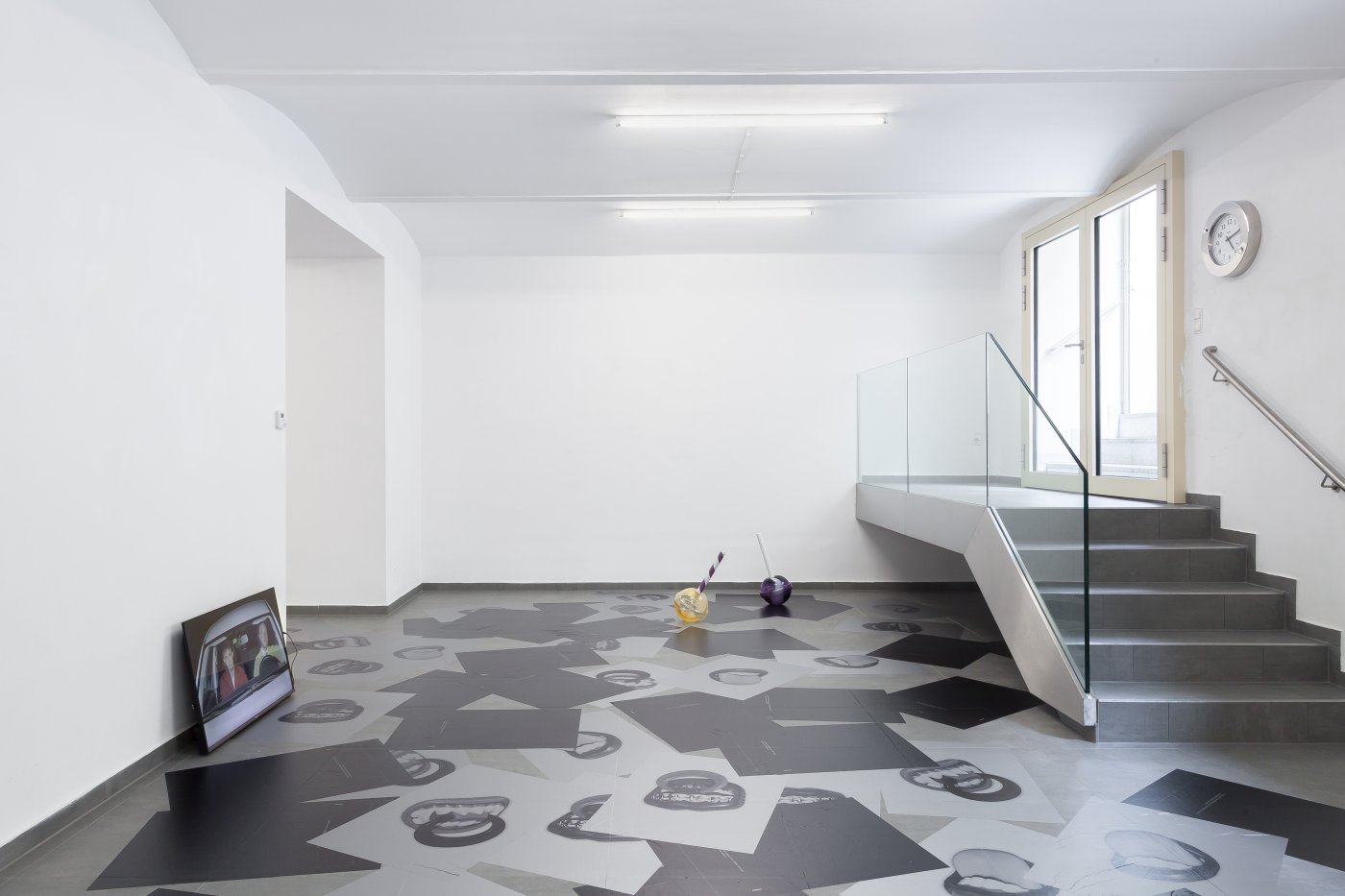 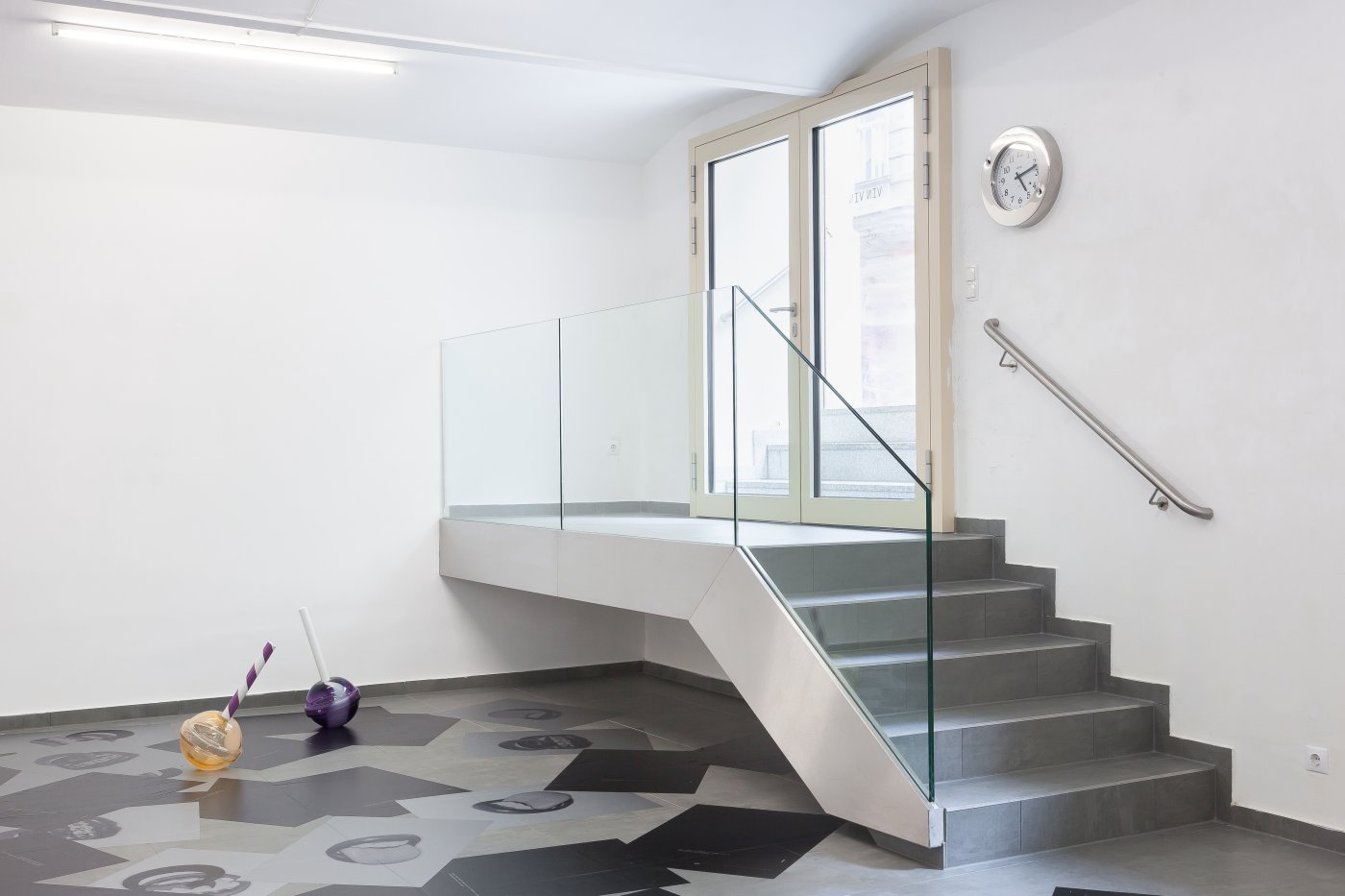 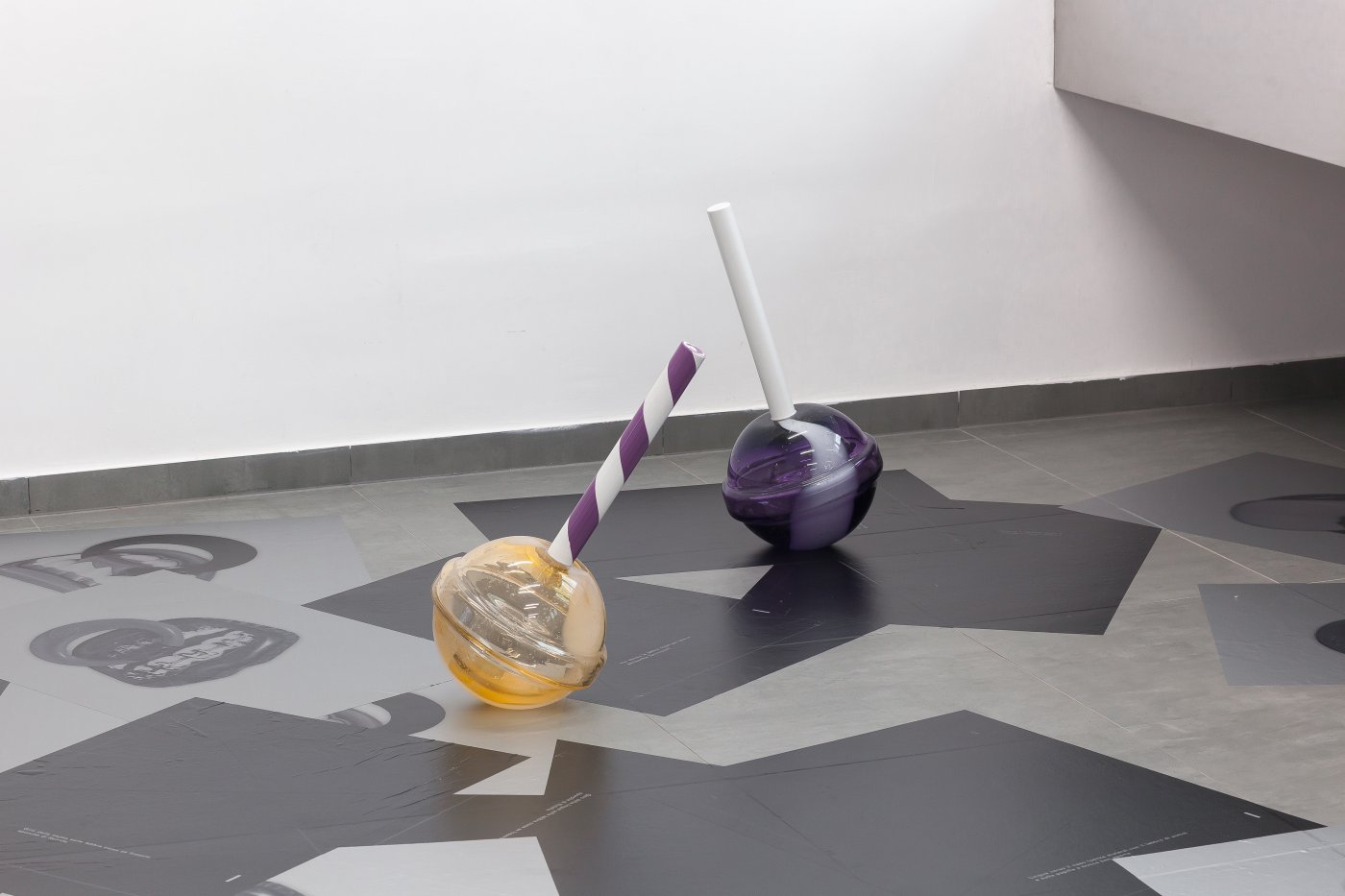 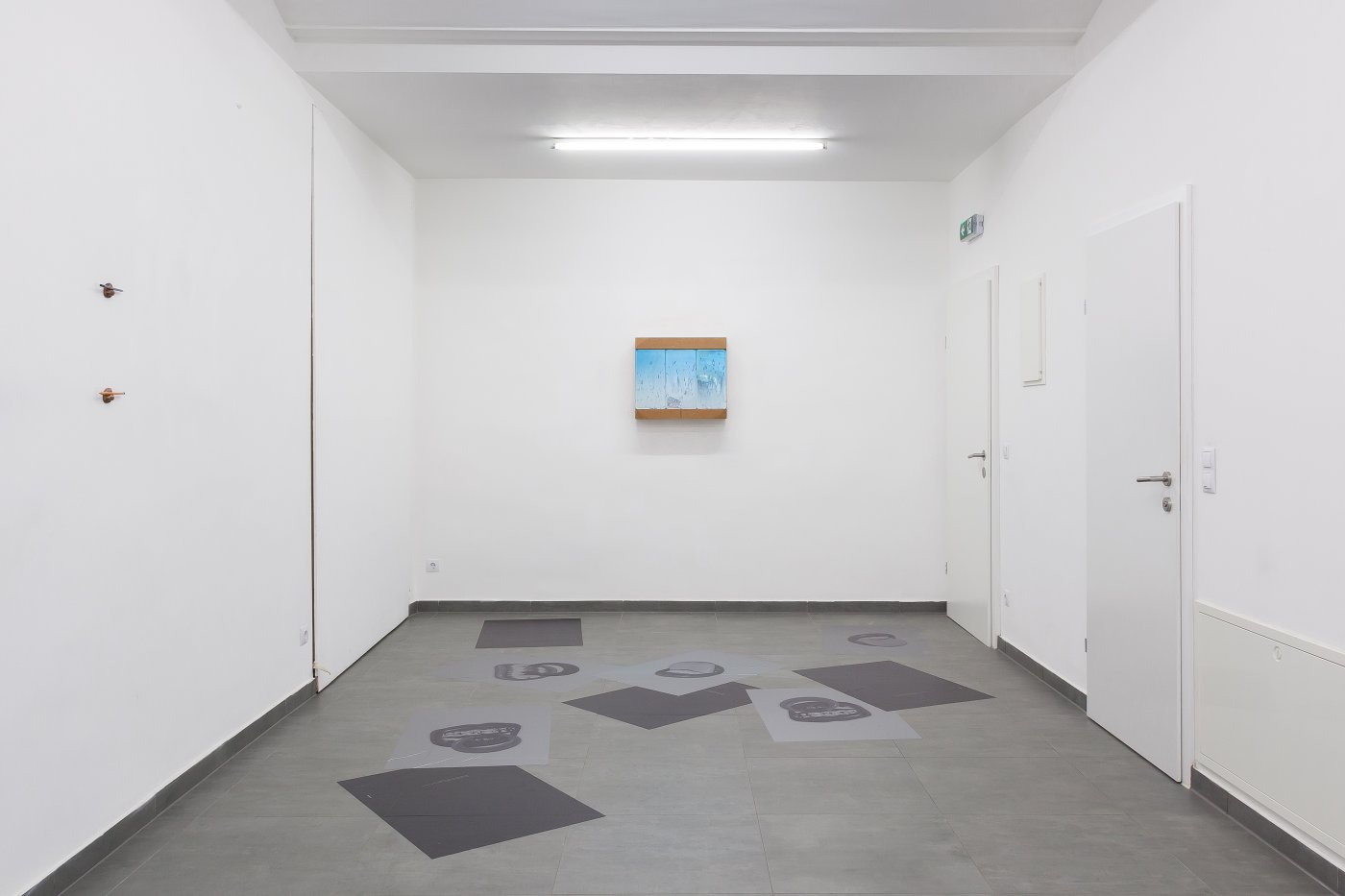 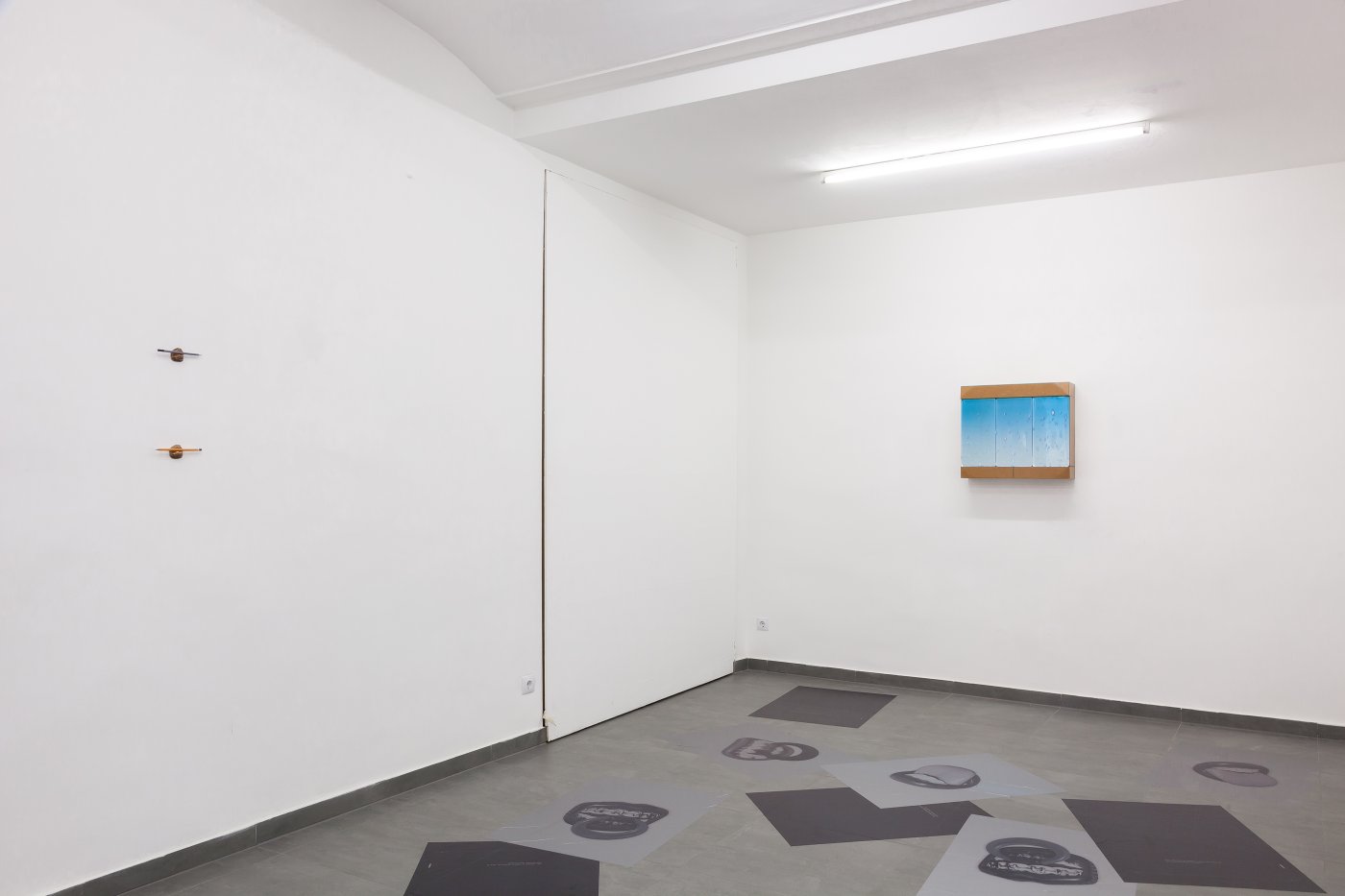 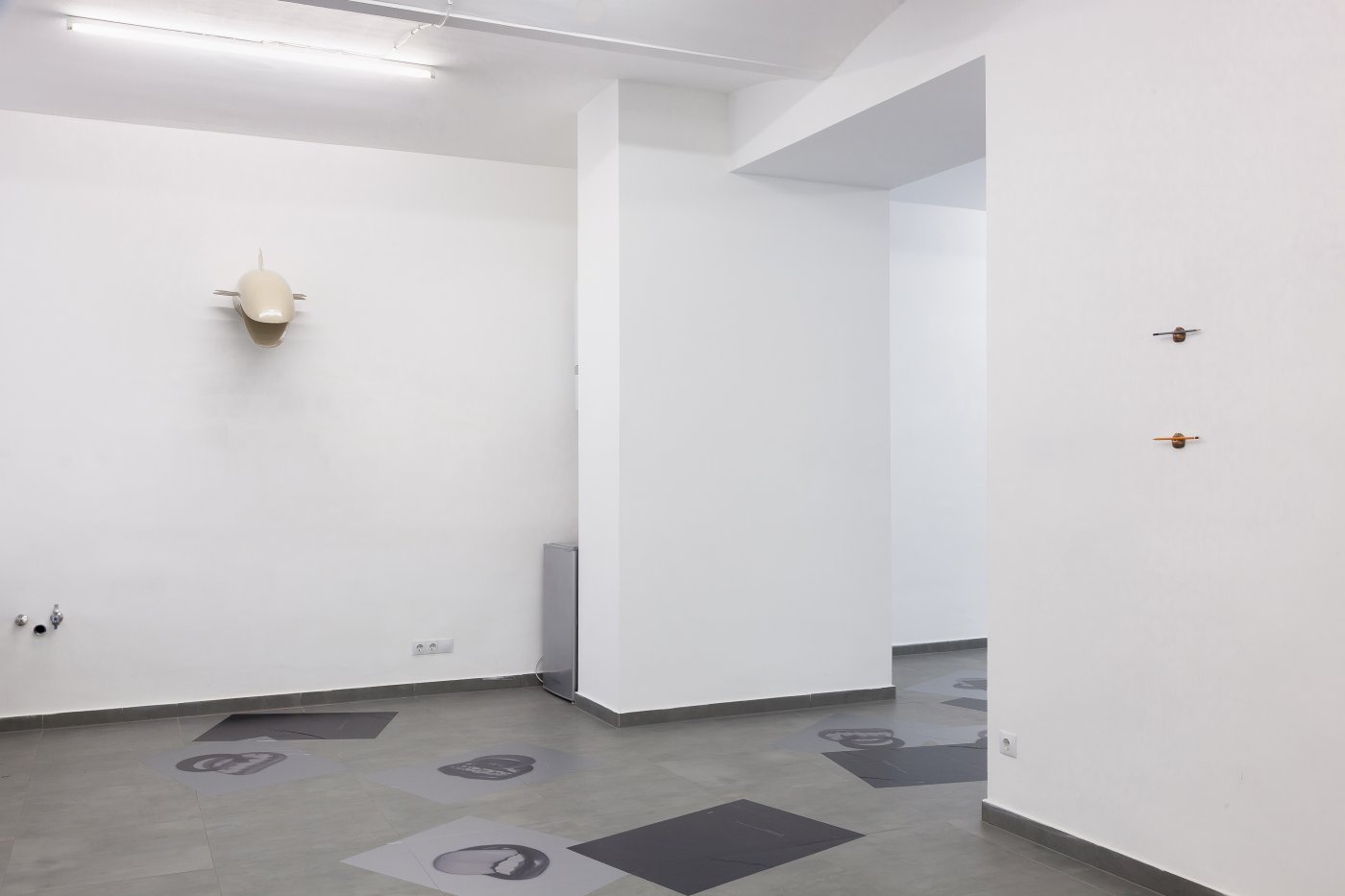 In a residential area on the outskirts of Geneva, in a white 2012 Subaru Legacy, Alfredo Aceto and Thomas Liu Le Lann chew white chocolate cubes. In Chew (2022), a video loop just under nine minutes long, the duo look like a caricature of Cliff Booth (Brad Pitt) and Rick Dalton (Leonardo DiCaprio) in Tarantino’s Once Upon a Time in Hollywood. Maybe it’s because the feature film’s never-ending digressions have little to do with the economy of the narrative, or because so many of the two protagonists’ occasionally inconsequential scenes take place in a car, but the HD video, with Aceto in his usual attire, a yellow sweater, blue tie, and white shirt, and Liu Le Lann in a brick-red jacket and white T-shirt — also plays upon digression. The collaborative work, in addition to providing the two-person show with its key image, also supplies its title. The chewing reaches its climax after the two-minute mark, when the video’s soundtrack materializes a flute solo piece titled Voice (1971) by Tôru Takemitsu, here performed by Chih-Yueh Yang. At this juncture, the guttural gestures of the musician’s mouth overlap with those of the two artists as they chew white chocolate.

Alfredo Aceto and Thomas Liu Le Lann seem not to take themselves too seriously as they undertake an exhibition project that reflects on childhood learning and the ways in which specific parts of the body are involved in the process of artistic production.

The floor of VIN VIN is partly covered with posters printed on shiny silver vinyl. Like Chew, this is also a collaborative work, one in which the artists’ respective inner worlds meet upon a common ground based in part on generational closeness, the bond of friendship, and, in the context of art, certain shared visual references. Floorpiece (2022) consists of 170 industrially screen-printed posters depicting pacifiers –– in the shape of tongues, vampire teeth, and dental appliances –– with inscriptions that refer to a series of “Orofacial Muscle Exercises for Artists” produced by a speech pathologist named Dr. Daniel Garliner. The exercises, which borrow specific images and codes from the universe of childhood storytelling, are ostensibly intended to correct the functioning of the tongue in the mouth cavity.

Also distributed on this collage-floor are lollipop sculptures in blown glass and painted lacquered wood by Liu Le Lann — objects that suggest the action of licking and the use of the tongue as a medium that can alter physical forms. With a complimentary tension, Aceto’s two Bocca con matita (2021) present a material illusion –– the fixity of a bronze cast of a mouth that, by contrast, suggests viscosity when forced to coexist with the formal rigor of the pencil. Meanwhile both works emphasize a strong formal and serial component that enhances their sense of sexualization and fetishism. Yet another commentary on notions of mastication and language takes crystalline form in Aceto’s Gutter-Gargoyle VII (2022), an industrial-beige gargoyle sculpture, its mouth wide open, with an obvious and erotic aesthetic charge that is enhanced by the refraction of light across an iridescent surface resembling the lacquer of nail polish.

Aceto’s formal and exhibitionary exercises are in many ways complementary to Liu Le Lann’s objects. The former’s Le Hublot (2021), a “Momento” clock designed by Aldo Rossi for Alessi in 1993, here pierced by bullets in two random places, is somehow reminiscent of Warhol’s “Shot Marilyns.” It is also conceptually proximate to Liu Le Lann’s Sweet Teeth (Milo’s braces) III (2022), a mirror cabinet characteristic of Swiss bathroom fornitures, a standardized object that encompasses every social and geographic category in Switzerland (a country the two artists otherwise share). Liu Le Lann has replaced the cabinet’s mirrors with colored blown-glass panels, in hues that reference the white and blue of the Lexomil and PrEP pills that the cabinet might contain.

There is also a high-definition scan of a photocollage, printed on cotton paper, of Aceto’s face in the act of performing one of Garliner’s orofacial exercises. Egg-Human (2022), inspired by a work by Martín Soto-Climent, emphasizes the artist’s obsessiveness about the function of the tongue, whose correct position within the mouth determines the balance of the rest of the body. Though using a similarly obsessive attention to processual detail, Liu Le Lann’s works seem to mine a less melancholy and depotentiated vein of the conceptual matrix: We All Go Through (2022), a photograph mounted on aluminum, functions as an index to the exhibition as a whole. The image consists of an enlargement of crustaceans, specifically a sea grasshopper, in an archetypal fish tank in a restaurant in Huludao, China.

The exhibition is both an individual and two-person exercise — an attempt at a liminal coexistence between interpersonal and objectified dimensions, a gray zone through which Aceto and Liu Le Lann move by examining the mechanisms of the art object and the body in relation to the structures of language.