Fergus McCaffrey presents a solo exhibition of works by American painter Anna Conway. This presentation marks the artist’s most expansive to date, with nearly a dozen paintings tracing the development of her subjects and her stylistic and extraordinary technical experimentation over the past two decades. 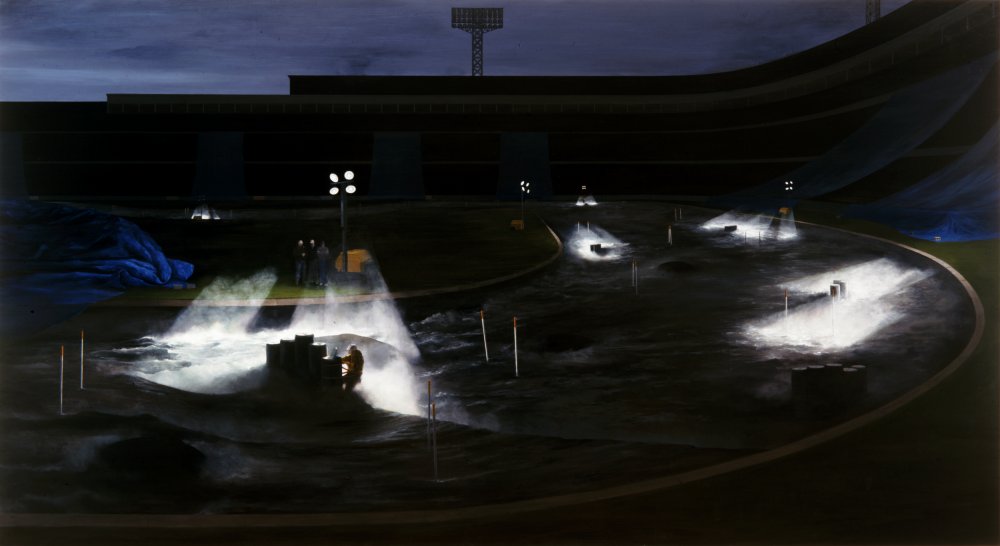 Anna Conway
Somebody Call Someone, 2004 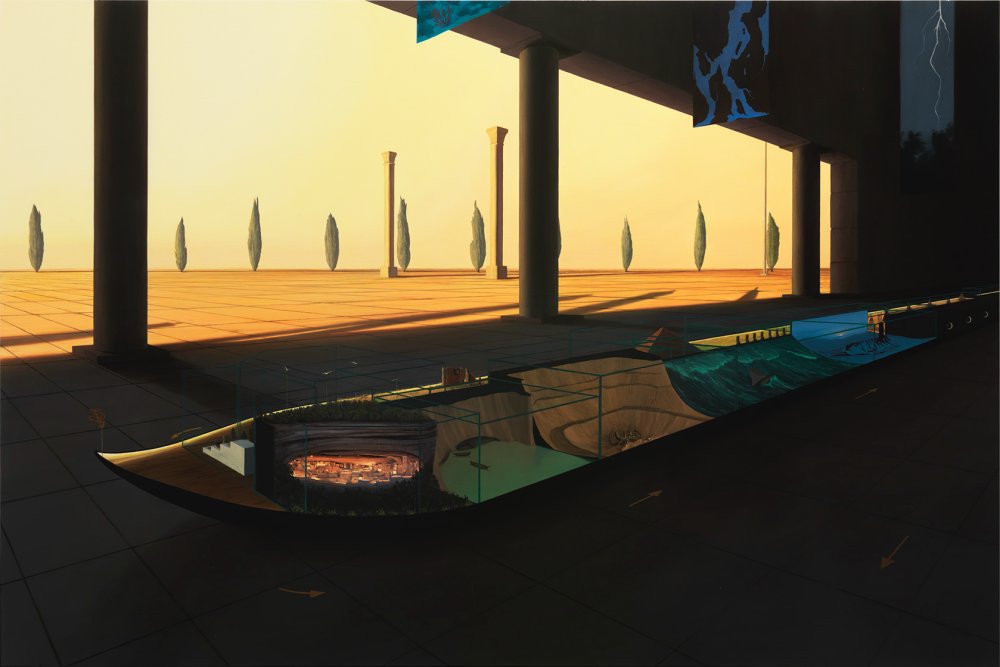 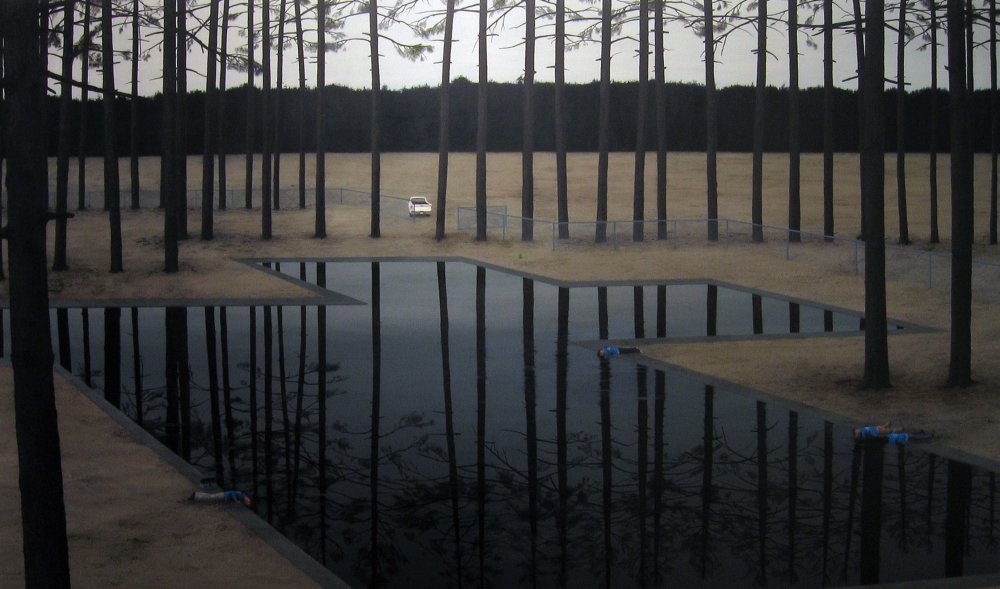 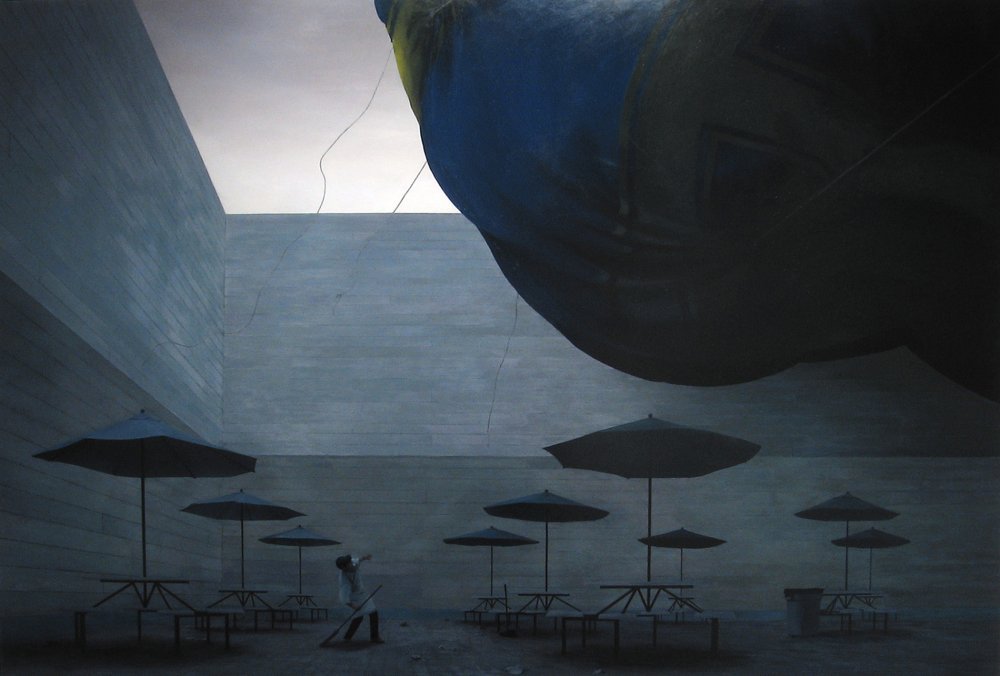 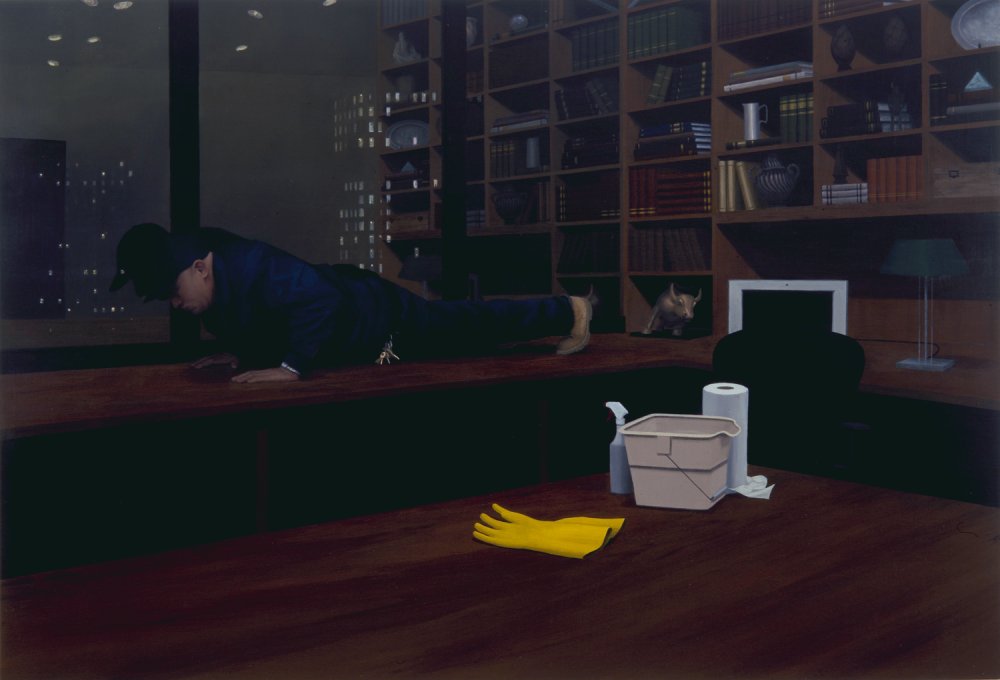 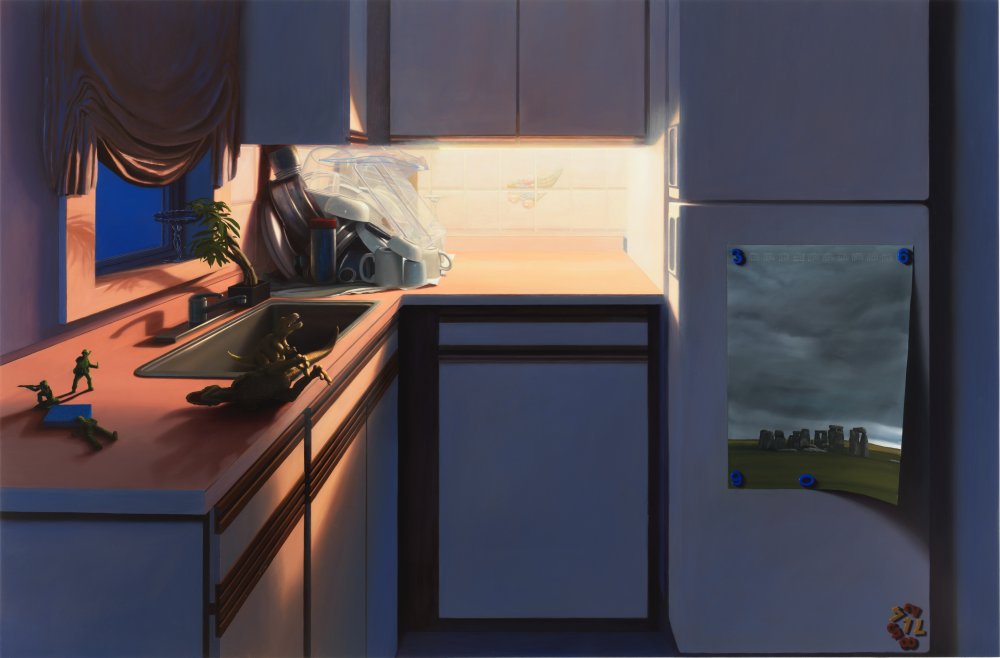 Anna Conway
Fishing for minnows on the back of a whale, 2021 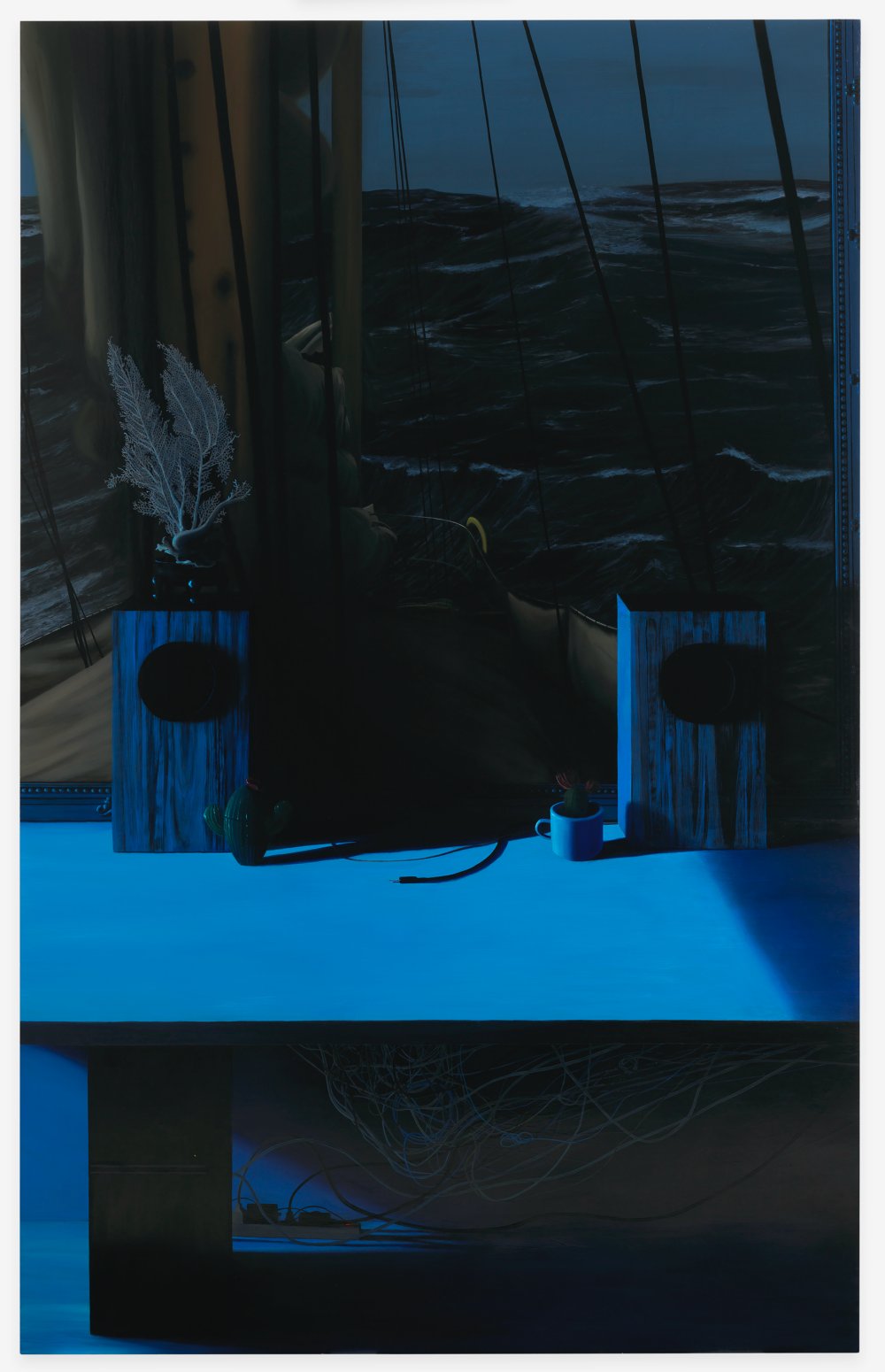 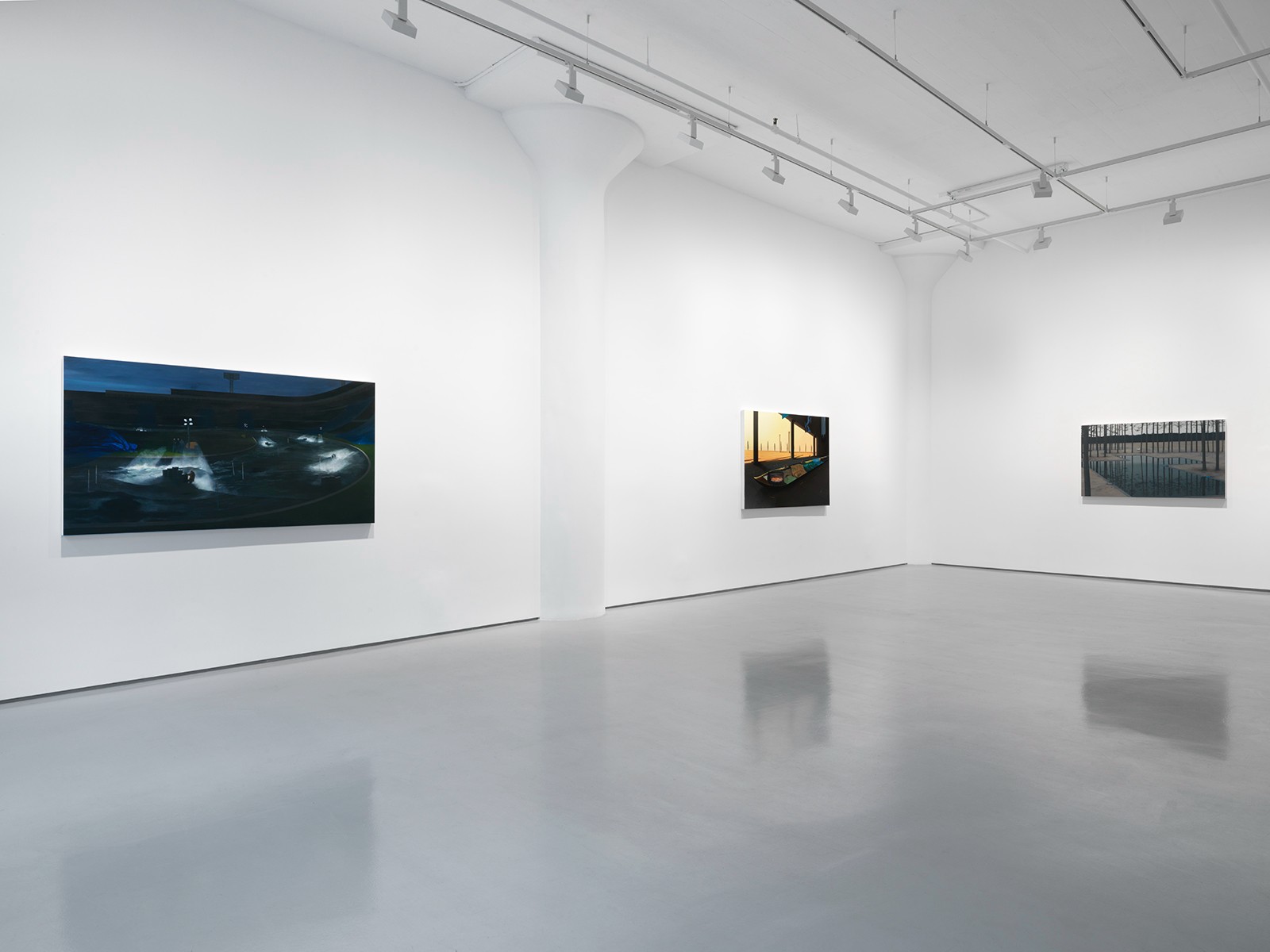 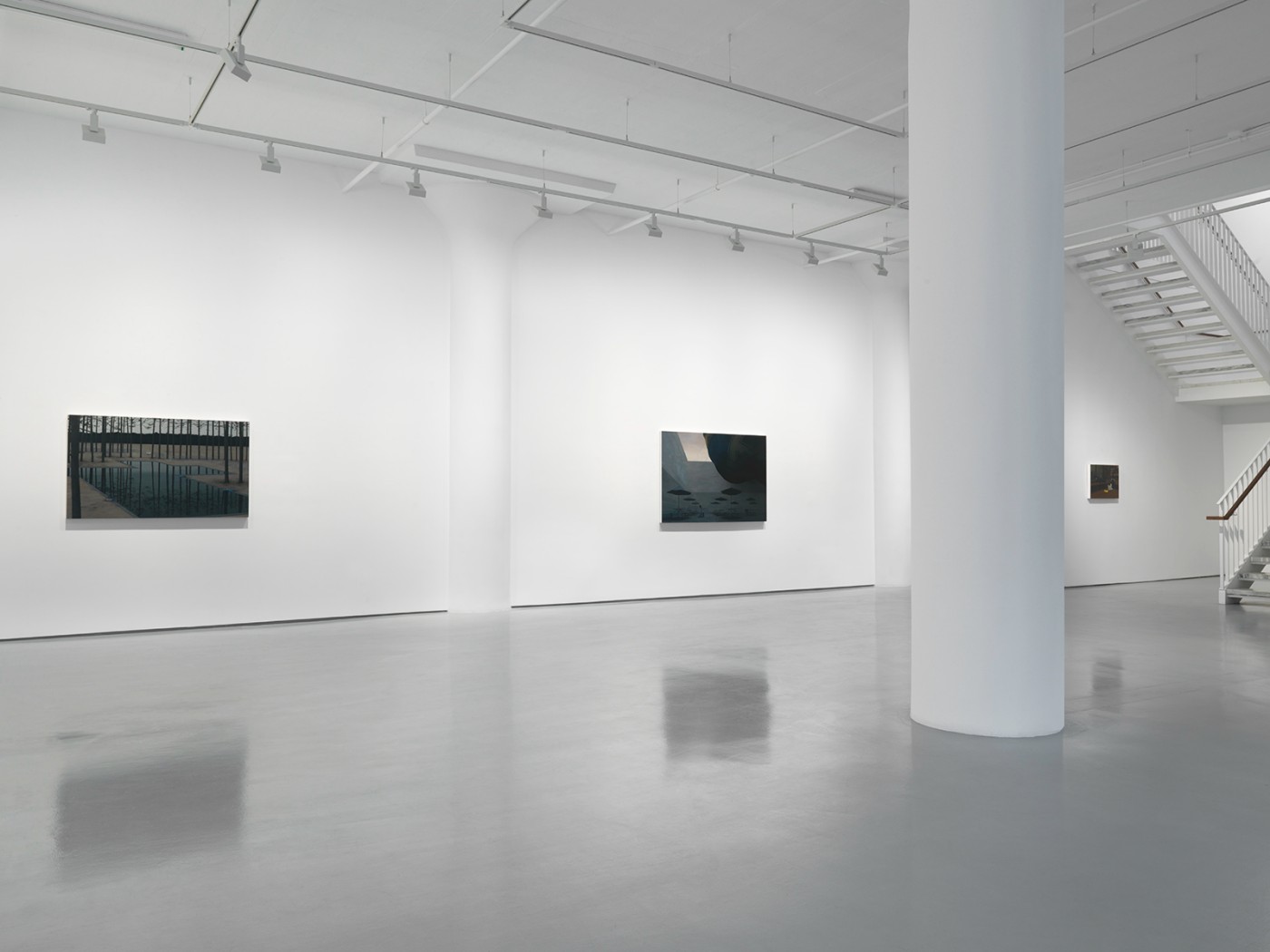 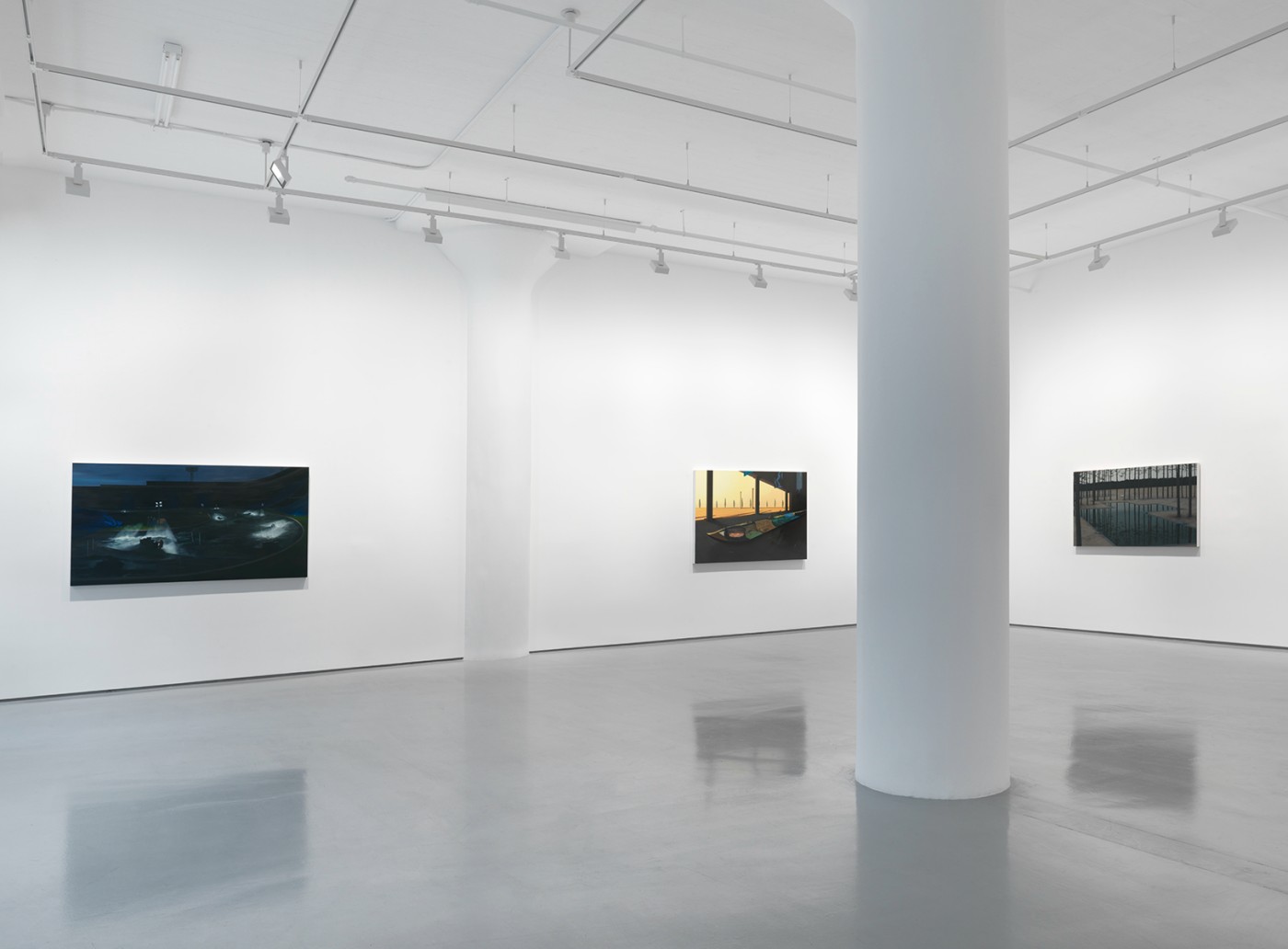 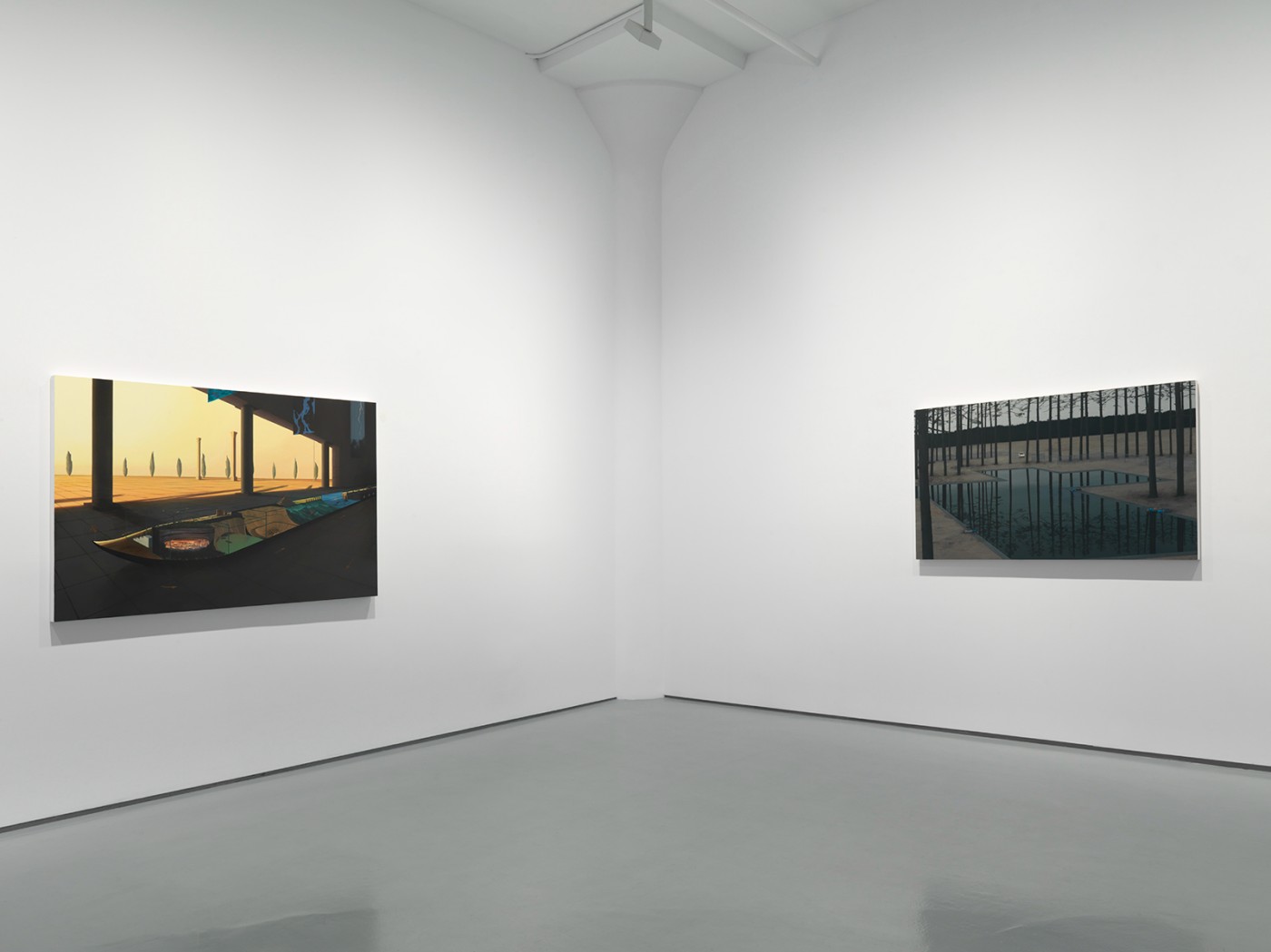 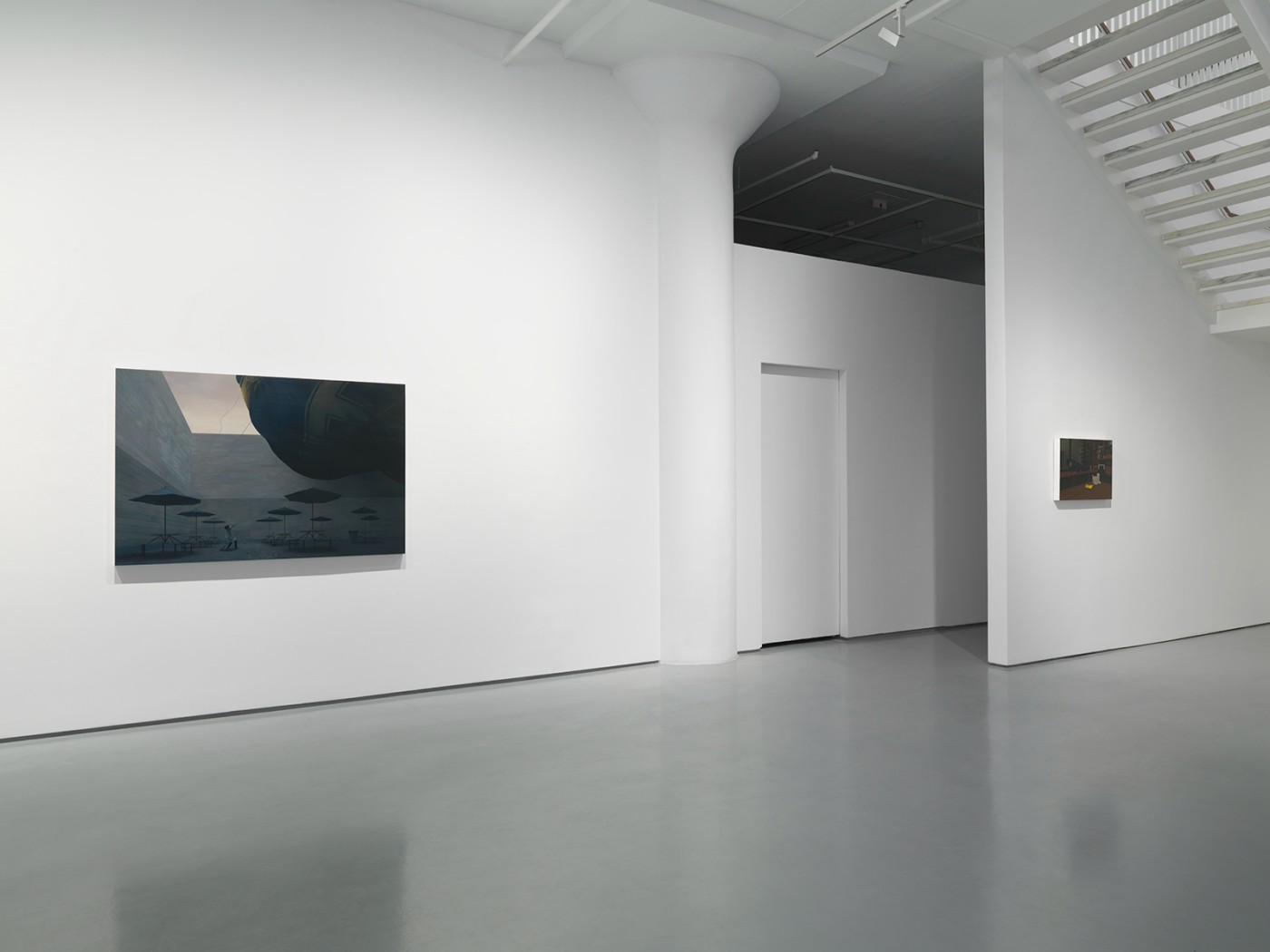 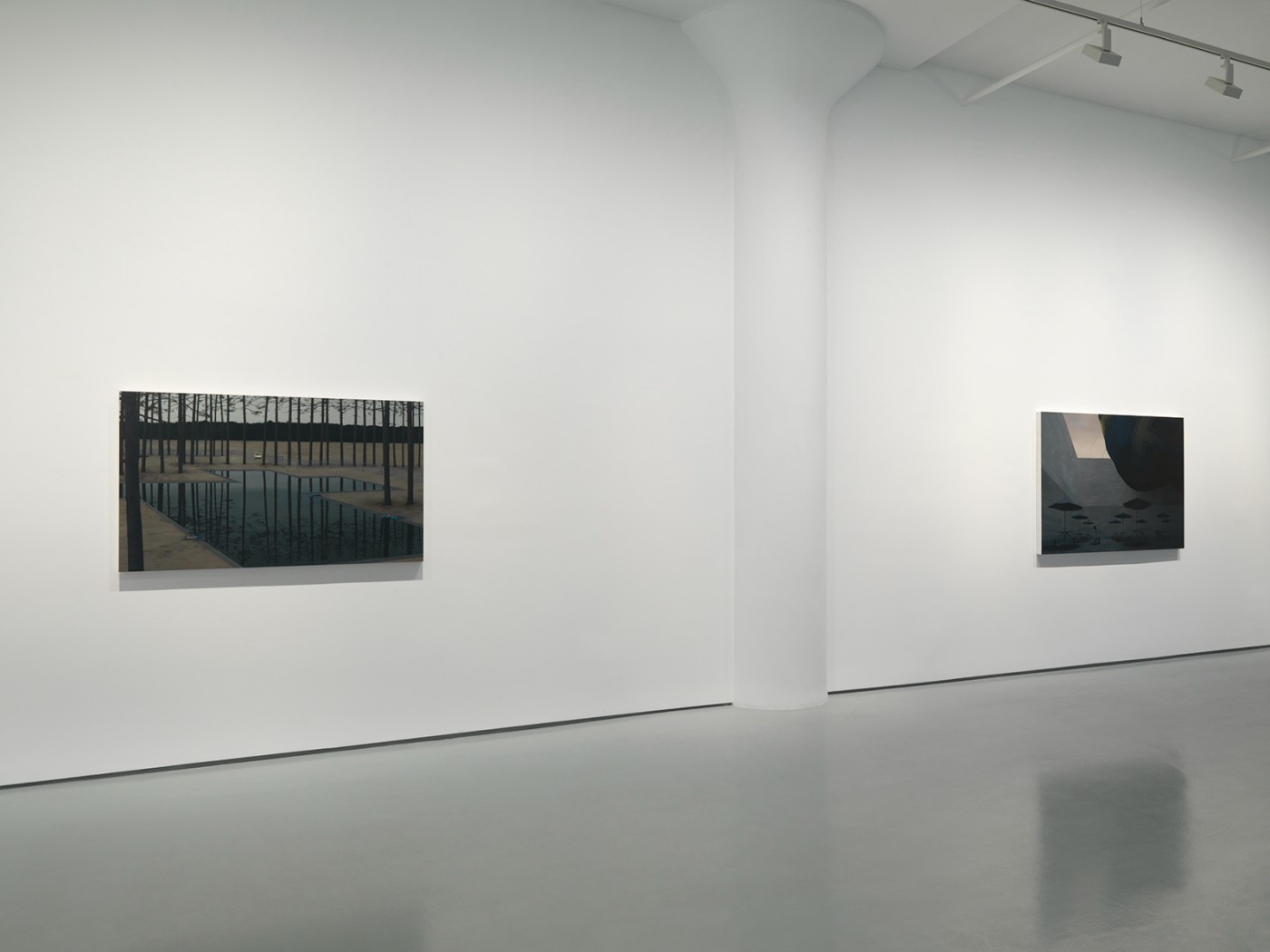 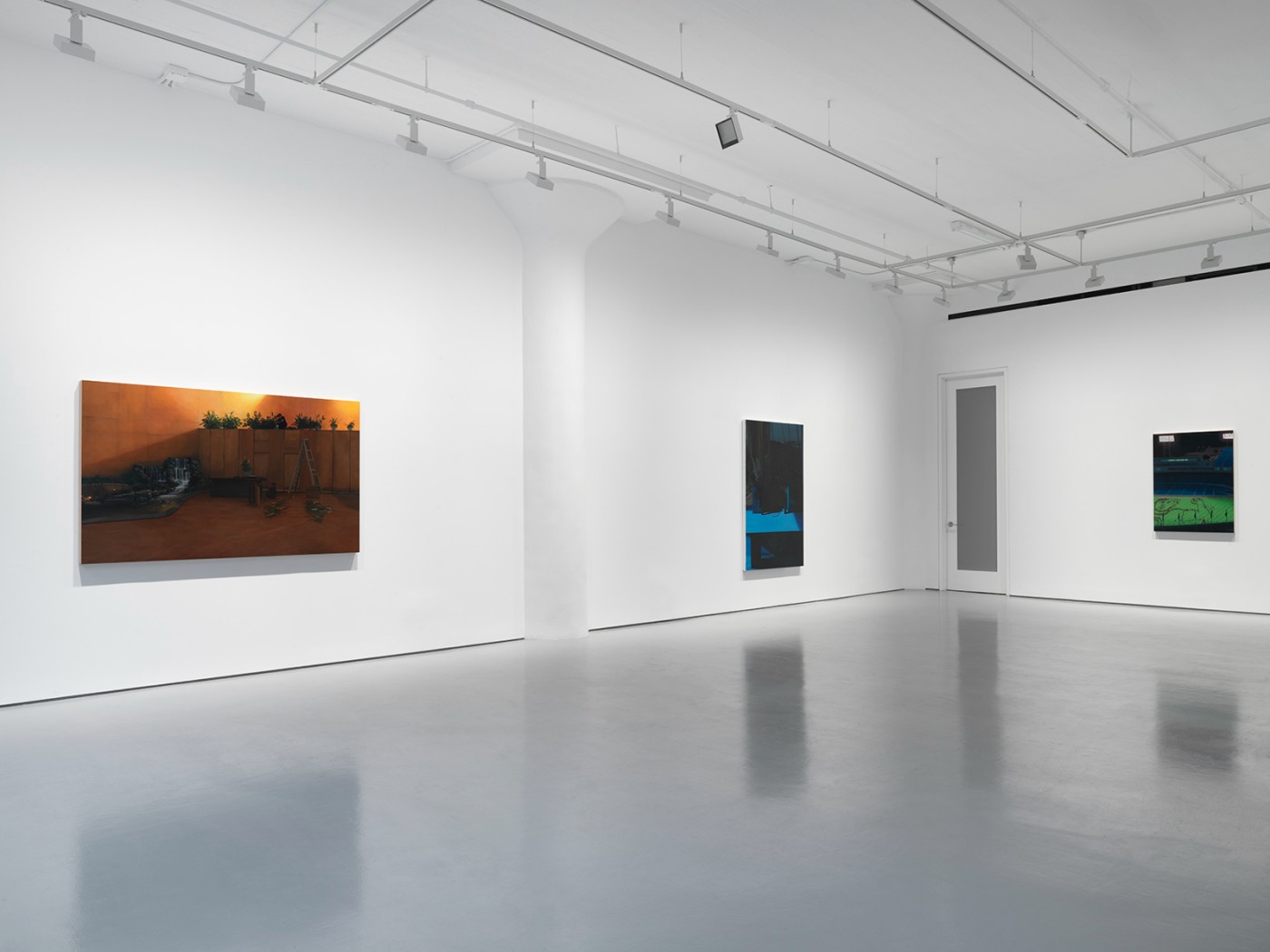 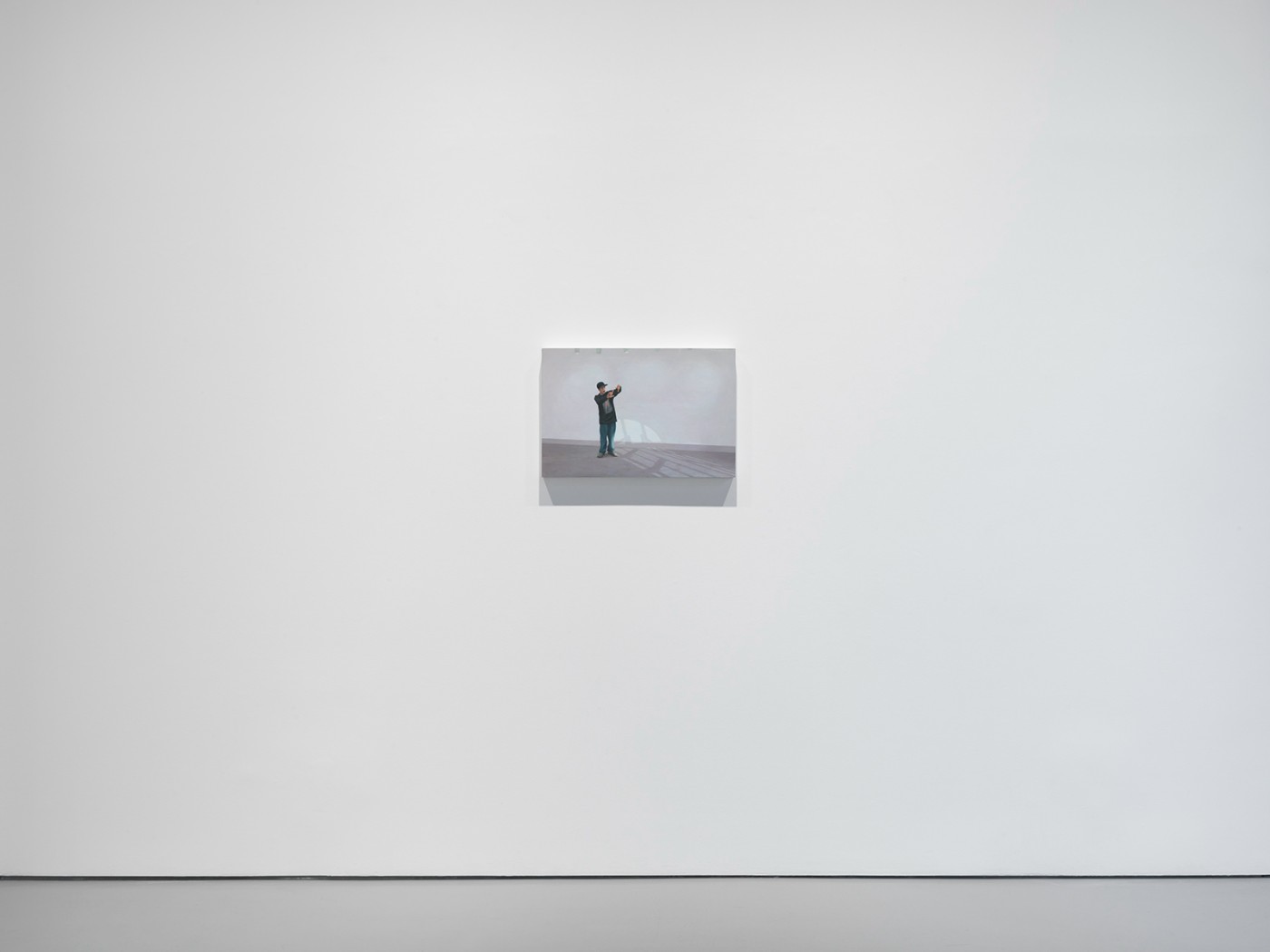 Conway’s process of conceiving and fully realizing her paintings without preparatory studies necessitates continual additions and erasures, and the tracks and traces of meticulous revision present in each work render visible the same exacting labor that limits the artist’s production, making an exhibition of this scope all the more impressive. The results are capable of producing in the viewer the same states of transitory, emancipatory awe experienced by many of the paintings’ subjects. These are often men, discovered during moments of unglamorous work, who have been disrupted by a glimpse of transcendence brought on by a momentary dissociative lapse or an event of improbable drama. Leonardo (2007) depicts a janitor in the dead of night, having set aside his gloves and cleaning supplies, struck by an overwhelming impulse to do push-ups on, or closely examine the surface of, a desk patrolled by the bulls, books and cigars of the financial industry’s day- shift plutocrats, while the four workmen in Pound of Cure (2004) hold their breath, faces thrust into a manmade pool, as they struggle to address some corporate or civic failure to have supplied an ounce of prevention. In Alejandro (2005), a service worker sweeping a food court recoils as a collapsing inflatable advertisement descends upon him, his life threatened by the celestial marriage of pathos and bathos.

Among other autobiographical elements, manifestations of Conway’s upbringing in two NFL stadium towns—Green Bay, Wisconsin, and Foxboro, Massachusetts—appear throughout her work. Here Comes Everybody (2003) envisions a rehearsal for a halftime show in which hundreds of volunteers scurry into a choreographed depiction of a single giant superfan—a thing physically greater than themselves but, still, lesser than the humanity of any of its constituent parts. Throughout the exhibition, stadiums and exurban landscapes offer backdrops scaled to evoke the particular awe-struck unease brought on by the empty expansiveness of spaces common to the United States, and particularly the Midwest farmlands, where Conway’s mother was raised. Conway finds “flyover country” particularly fertile ground for the exploration of interiority-seen-at-a-distance—a key component of the vitality and peculiarity of her dynamic emotional palette.

Instead of depicting men in moments of epiphany, Conway’s two newest paintings position the viewer in the state of entrancement. In Ark (2021), we come upon a feat of ethnographic exhibition design: a cave dwelling, the ruins of monuments, a survivor-less whale hunt, a submarine surfacing through ice in some polar dawn. Great and ignominious moments, perpetually just past. These scenes—set into vitrines in the shape of a large boat—initially present themselves as feats of diorama-making. The museum’s situation in a limitless metaphysical plaza, composed of cypress trees and columns on a Cartesian perspective grid, raises the possibility that this might instead be a museum of the gods, or a future digital storehouse for the whole quaint history of our obscure human race. All of these possibilities are preserved: these “models” might equally be the events themselves, unfolding, looped, over eternity.

The artist’s second newest painting—an interior— playfully compresses the history of everything into a modest kitchen: on the counter two toy soldiers fight valiantly on for a cause perhaps lost or even unknown to them, their wounded compatriot writhing in pain on a blue sponge; nearby, one plastic dinosaur roars, asserting dominance or avowing vengeance, over another, who is toppled and vanquished. A six-story structure of washed dishes teeters on the brink of collapse, as the fiery light of a Home Depot under-cabinet fixture suffuses the scene, overexposing a horn-of-plenty tile backsplash. A Stonehenge calendar hangs from the nearby fridge on numeral magnets, numbering our days from the beginning of time, and here are our struggles: feasting on mythology when there’s food in the fridge; Fishing for Minnows on the Back of a Whale (2021), as the painting’s title would have it. Conway describes the kitchen as belonging to the mother of a son. A kitchen as such might combine an incongruous assemblage of the present, the past, the banal, the imagined, the human, the prehistoric, a sponge and a calendar. On seeing the entranced, or through the eyes of the entranced, Conway has us blink a few times and look again—without innocence, our sense of absurdity very much intact—with wonder and awe at what bizarre and poignant things we’ve brought on ourselves.

Anna Conway (b. 1973) first came to prominence in the 2005 group exhibition, Greater New York, at MoMA PS1, where her meticulously rendered paintings announced the arrival of a singular talent. Her stylistic development has emerged from spectacular and unpredicted encounters with natural forces beyond normal human experience, to a more anthropological and psychological exploration of the human condition. Conway’s paintings are a testament to the continued relevance and fascination of the centuries-old tradition of realist painting—an archaic practice, which seems to grow only stronger with every passing year. She has exhibited extensively in the United States and Europe, and is the recipient of numerous accolades, including: the John Simon Guggenheim Fellowship (2014); the Pollock-Krasner Foundation (2011 and 2005); and the William Metcalf Award from the American Academy of Arts and Letters (2008).

© the Artist; courtesy the Artist and Fergus McCaffrey, New York