…there is only one Andrew Browne – an artist who consistently keeps evolving and re-evolving both the possibilities of paint on canvas and the way in which it relates to the physical world… He draws from a wide field of references, including photography, cinema and art history, to devise a new approach to image making, which is governed by the joint dictates of sensation, innovation and revelation. – Simon Gregg, Curator, Gippsland Art Gallery

Andrew Browne’s long affair with the medium of paint is at the heart of his solo exhibition, Spill. Extending his interest in landscape and natural phenomena, here his curious eye falls upon the suggestive ambiguities of water and the effects of light. 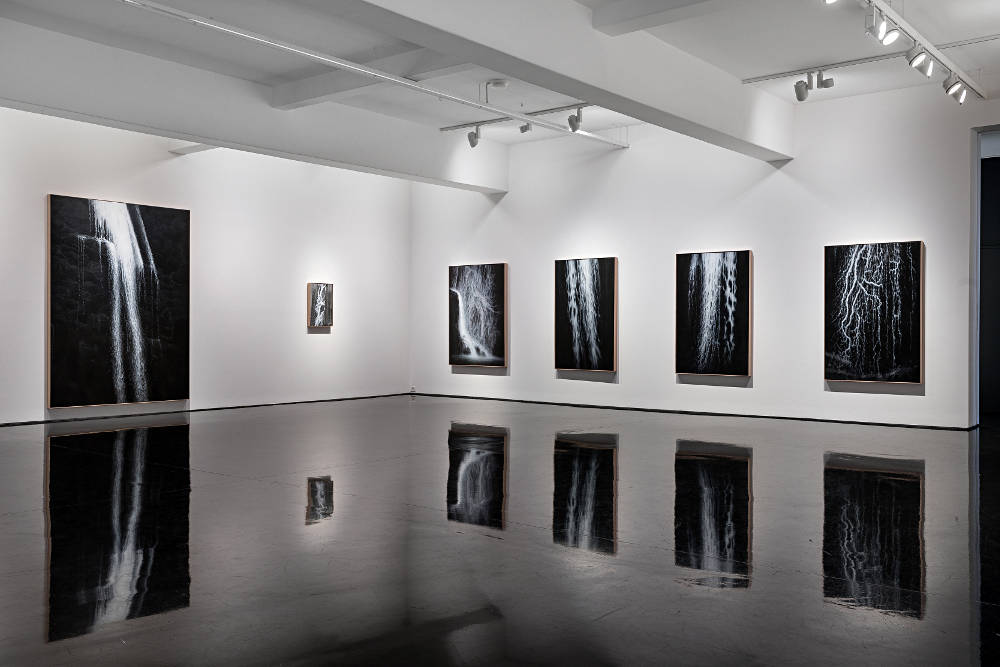 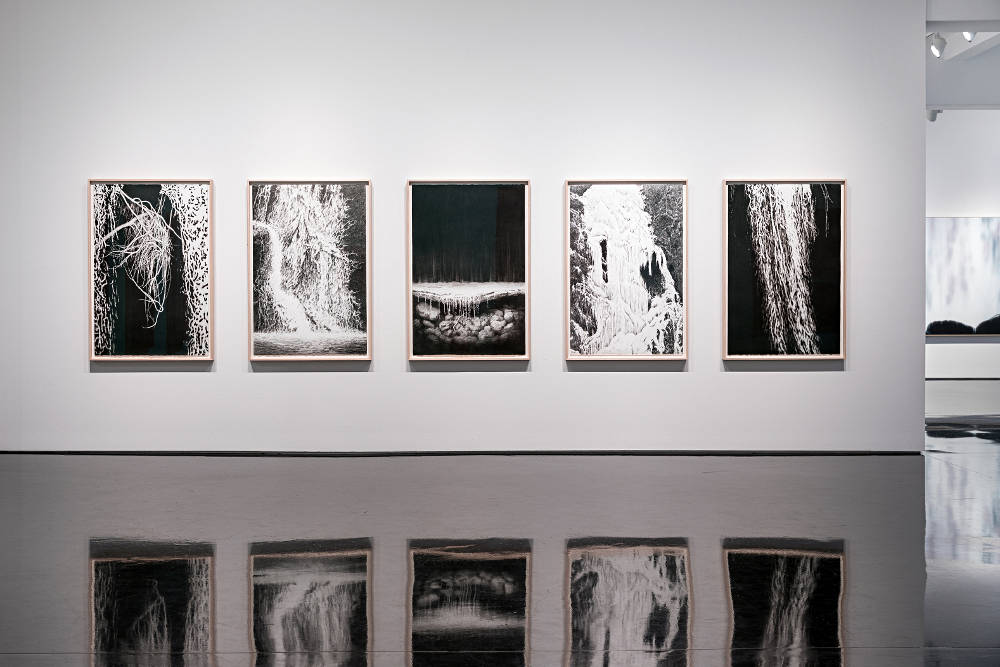 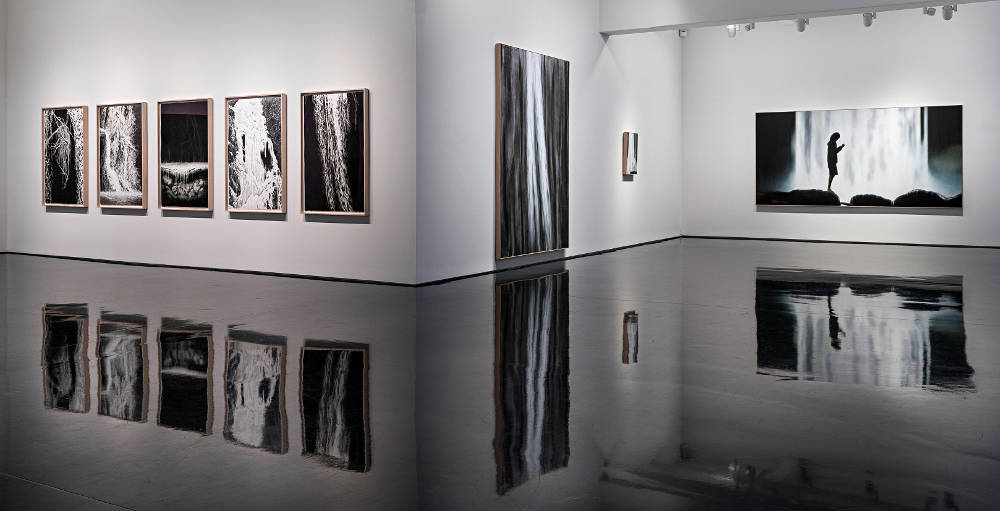 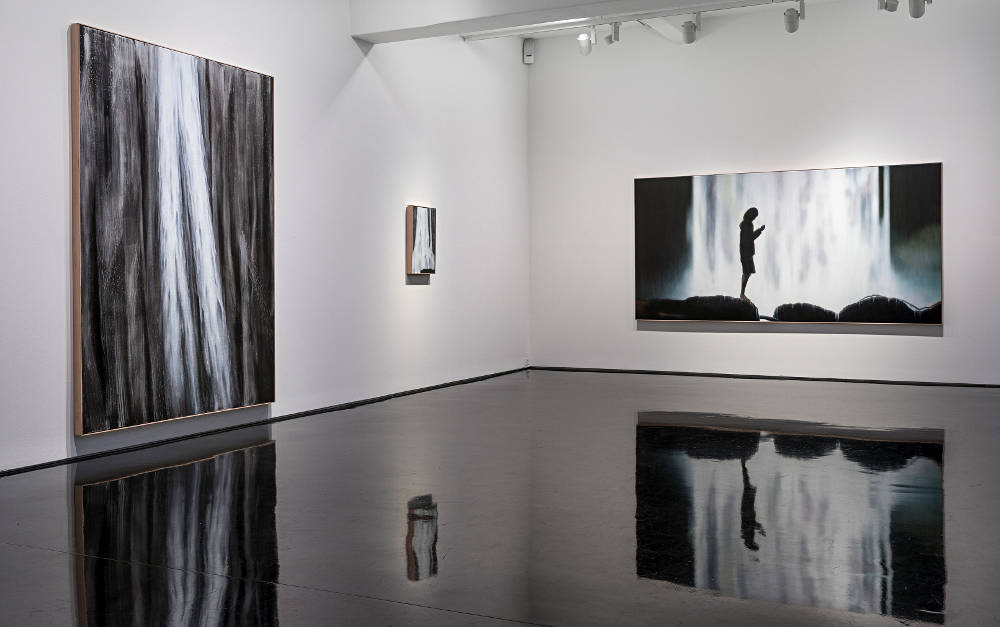 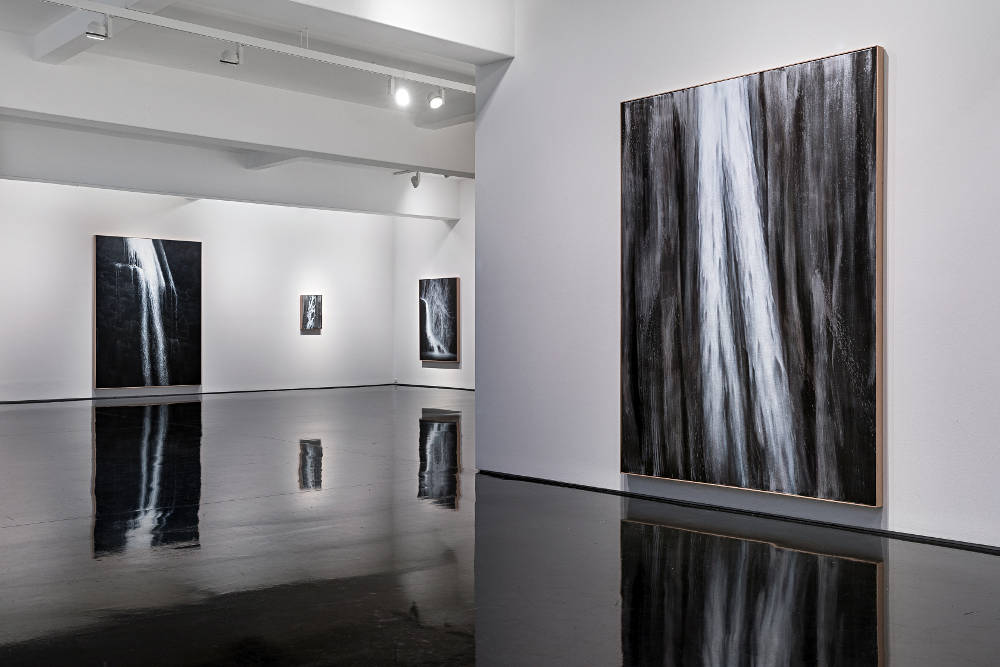 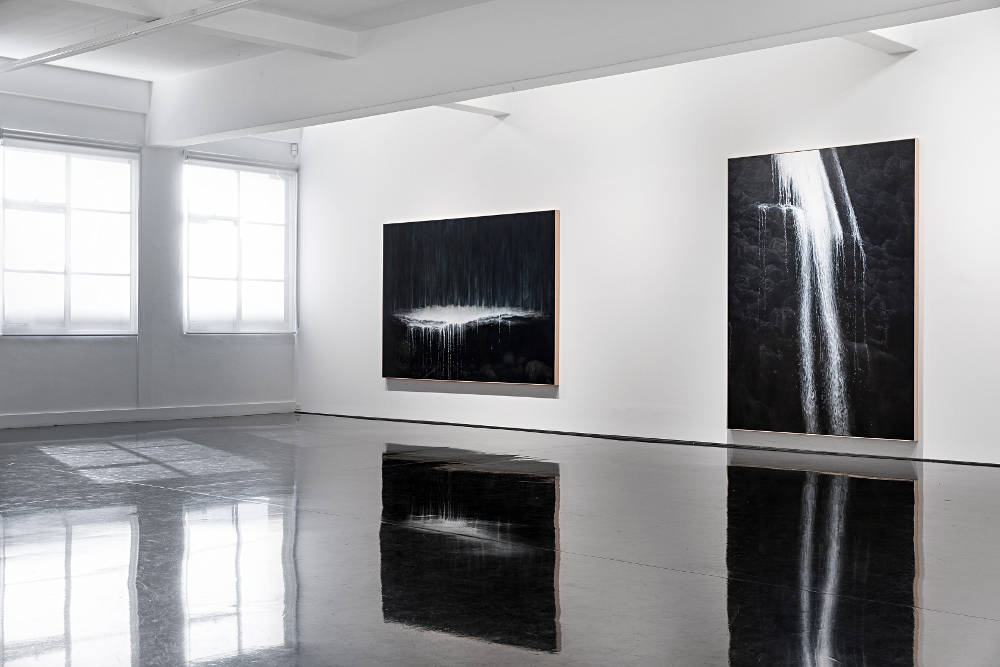 Spill is a meditation on the very substance of paint and the existential drive to deepen the game of painting itself.* Browne’s practice draws from his own photography, his eye trained to happen upon the anthropomorphic lurking within nature. But through his painting process nature becomes stylised and reductive. There are echoes here of the uncanny gothic character of his earlier series of apparition-haunted paintings and photogravures.

Spill impels us to pause and consider the power of water and its tendency towards spilling and falling… often over precipices. In Threshold we find an androgynous figure – perhaps an avatar or metaphor for the artist – poised in a charged cinematic moment of uncertainty, balancing on a makeshift bridge of fallen boughs or rocks, as white waters cascade violently behind. You can almost hear the roar of the waterfall, and sense the silently screaming vertigo of the figure. Head bowed, we might wonder – is this figure engrossed in a mobile phone screen in an effort to obliterate the world around; humbled in the presence of nature’s might; or merging into bridled chaos?

The monochromatic palette heightens the drama of the works. Fall #1 appears as a vertically flowing wall of water, and yet the limbs and body of an eerie figure loom in and out of view, recalling a Japanese horror film where a creature crawls out of the unreal into the real.

Fall #2 has an ominous sense of the levee about to break. Rather like the clamouring media on the edge of a political #spill, its tension is palpable.

The exhibition behaves as a fluid ecosystem. Large charcoal drawings, and paintings dramatically different in scale, widen the lens to take in vistas and narrow again on details. We float in a sea of free association and surreal juxtaposition.

His work was recently featured in such public institutions as National Gallery of Victoria: Every Brilliant Eye: Australian Art of the 1990s (2017) and Negotiating this world: Contemporary Australian Art (2012). As well, his work was included in: Luminous World – Contemporary Art from the Wesfarmers Collection at the Art Gallery of Western Australia (touring throughout 2012-16 to National Library Canberra, Samstag Museum of Art in Adelaide and Ian Potter Museum of Art, Melbourne); Photographic Abstractions at Monash Gallery of Art (2012); and Panorama at TarraWarra Museum of Art (2016).

*“the artist… must really deepen the game to be any good at all,” from Interviews with Francis Bacon by David Sylvester.