Turi Simeti, one of the most important representatives of Italy’s ZERO movement, has died at 91 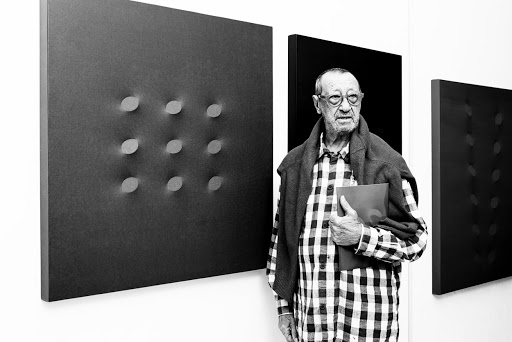 Associated with Burri and Fontana at the beginning of his career, Turi Simeti (b. 1929 Alcamo, Italy) developed his own unique research and practice, with exhibitions at Galerie M Bochum, Germany, the Bettina Gallery, Switzerland and, notably in 1965, Lucio Fontana’s Studio alongside the ZERO avant-garde group including Manzoni, Castellani, and Bonalumi.

Simeti’s practice developed from the flat collages of the late 50s and early 60s, to the spatial complexity of his successive works up until the present day. Whilst it may seem mathematically sequential, his art is evocative of notations of a musical composition, his distinctive extroflexed canvases offering a delicate breech of the traditional boundaries of visual art asking light itself to be the agent of meaning.