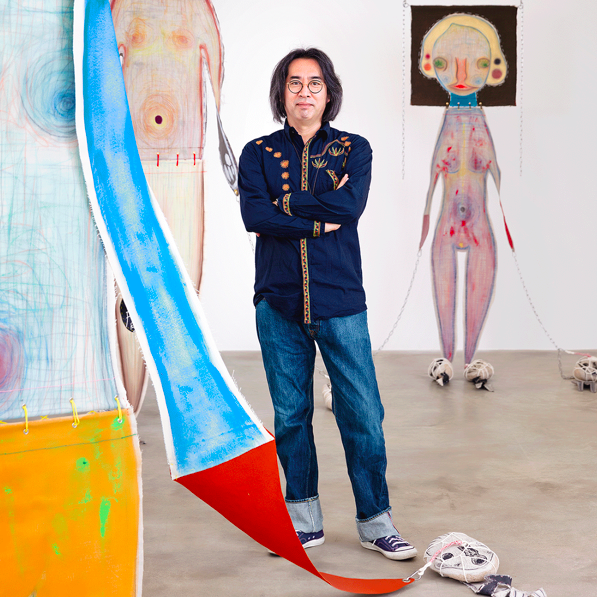 Kato lives and works between Tokyo and Hong Kong. He was born in 1969 in the Shimane prefecture of Japan, a sparsely populated province bordered by mountain and sea which houses Izumo Ōyashiro, one of the oldest and most significant shrines in Shintoism.

Describing painting as the root of his practice, with bold clashing colours the artist depicts children with unusual faces, embryos with fully developed limbs and figures with bulbous heads attached to slim, graceful bodies. Working intuitively, Kato applies pigment to surfaces directly with his hands. This ardent exploration led the artist also to paint textiles, wood and stone.

Gathering material from his surroundings, Kato combines painting with stitching, knotting and carving – skills that as an avid fisherman he uses regularly – to create sculptures and installations.

The creatures in Kato’s work tower over viewers or hide discreetly in corners of rooms. Speaking of the universality of the beings that he animates through his practice, Kato says, “They are no one and nowhere”; rather the forms are expressions of the energy and very essence of consciousness.

Stephen Friedman Gallery will host a solo exhibition by the artist in November 2022.