To accompany the exhibition of his work at David Zwirner London, director James Green writes for us about Andrzej Wróblewski.

We, at David Zwirner, are delighted to be presenting the first solo exhibition of Andrzej Wróblewski's (1927–1957) work in the UK. We're showing a group of key paintings and a wide-ranging selection of works on paper detailing recurring subjects from throughout the artist’s oeuvre, which often drew on Poland’s sociopolitical atmosphere in the wake of the Second World War. 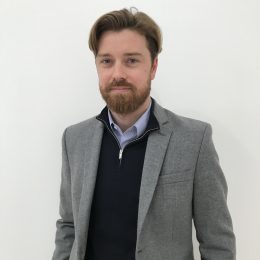 Wróblewski’s practice can be characterised as a unique language of figuration, with some abstract or surreal tendencies, relying on what has been termed the “eye of the soul”; not drawn or painted from life, but experienced even if not seen. He was responsible for a form of “Traumatic Realism”, in stark contrast to the Soviet Realist doctrine that had been declared in Poland in 1949 which was rejected soon after by Wróblewski. He was determined that history, and the trauma carried with it, should not be left in the past.

There is mythic construction of Wróblewski as a self-destructive, melancholic figure who was encroached upon by tragedy from all sides, but this is too simplistic. He had experienced great trauma, but also moments of hopefulness and personal contentment during his short life. The apex of these moments coincided with the political change due the “Thaw” in 1956, following the death of Stalin in 1953, and the birth of Wróblewski's two children.

Wróblewski was “semi-active” as an artist, arguably as a result of the unsettled conditions and difficulties that faced post-war Poland and Europe, and his work was neither ignored nor celebrated. It is not a historic record or archive, but something restorative following the traumatic events in Poland during this period of the 20th century. We hope the exhibition will encourage more dialogue around Wróblewski and reaffirm his importance and contribution to contemporary European figurative painting; not only in relation to artists from Poland and the former Soviet Union, such as Wilhelm Sasnal, but also with regard to figures such as Luc Tuymans and Marlene Dumas.