Zvonimir Mihanović’s paintings draw inspiration from the picturesque harbors, marine vistas and small villages along the beautiful Dalmatian coast of the Adriatic Sea. Art critics describe his artistic style as poetic hyperrealism because of his demanding and meticulous painting technique of the super-beautiful, hyper realistically expressed idyllic scenery he depicts. He has achieved worldwide fame for his paintings, which present a realism of peace and tranquility. 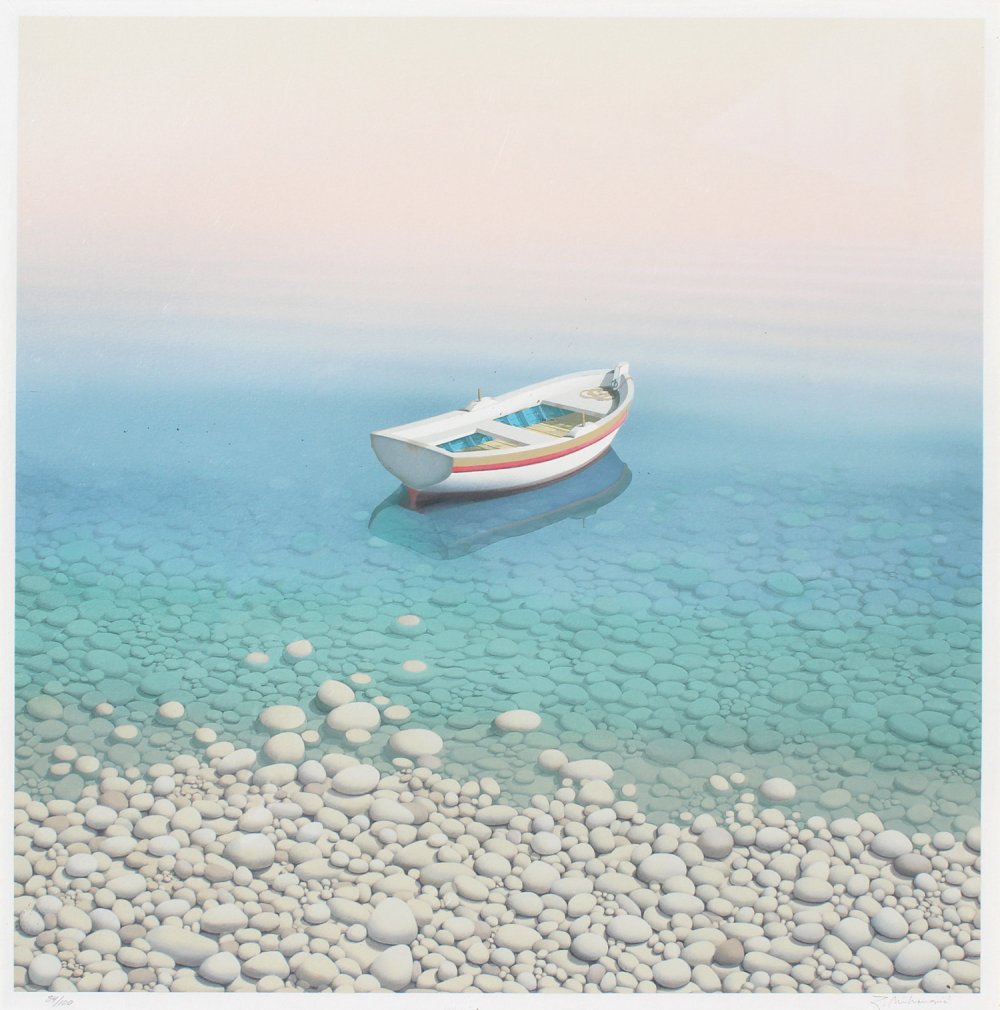 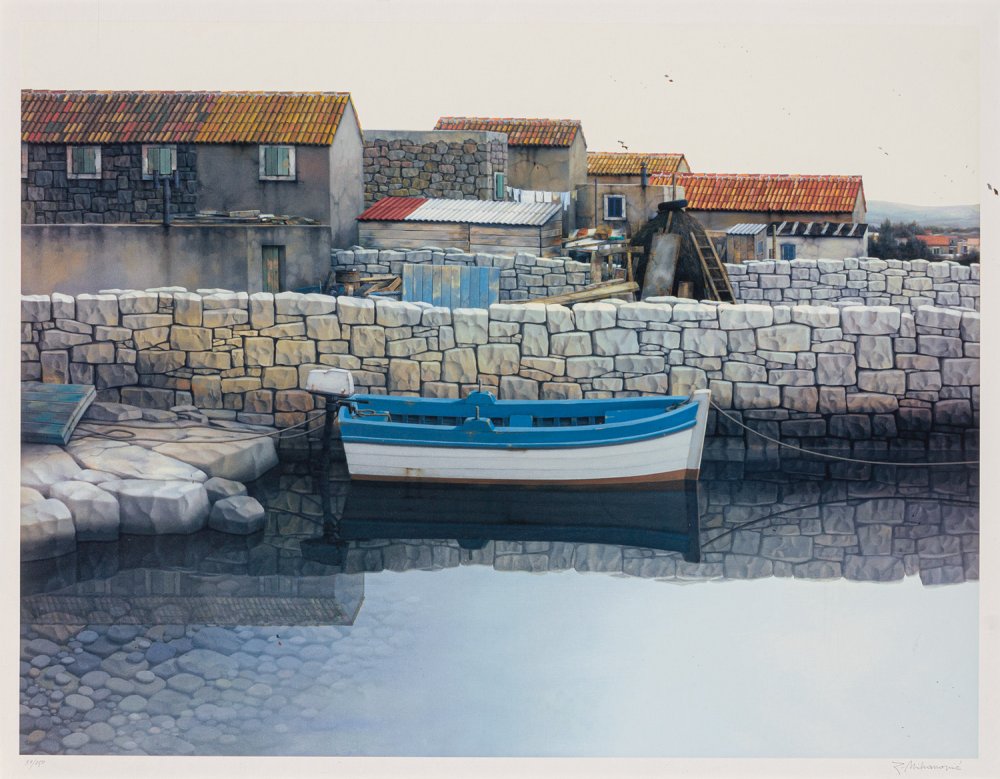 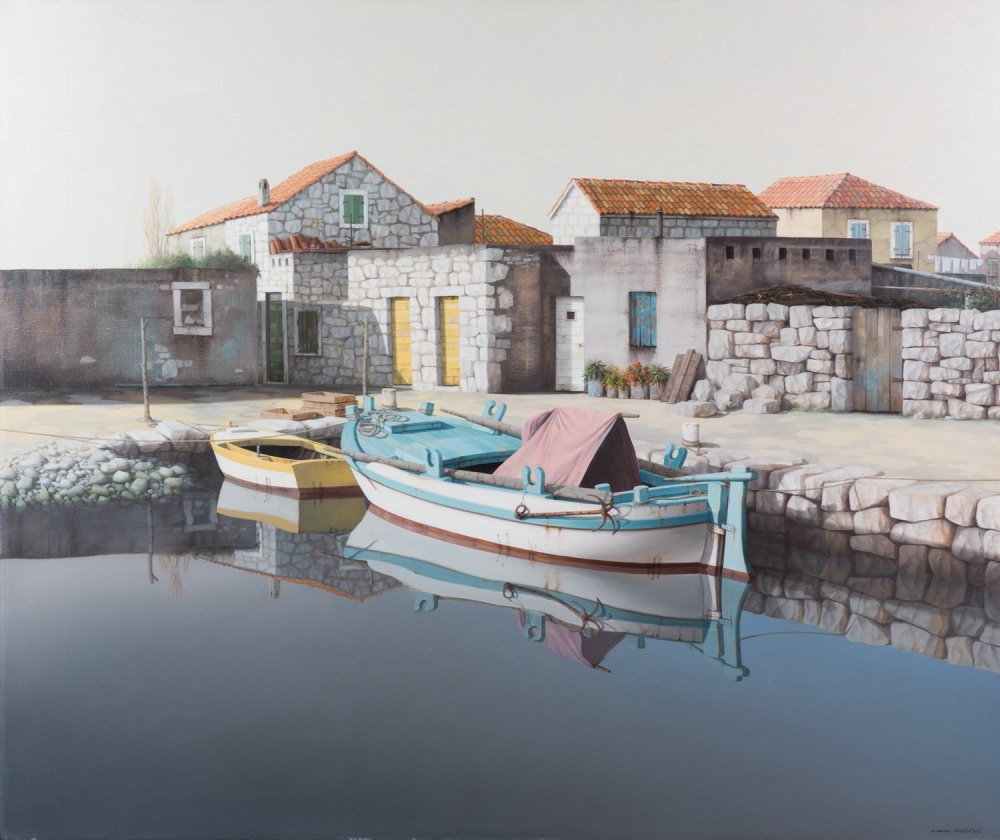 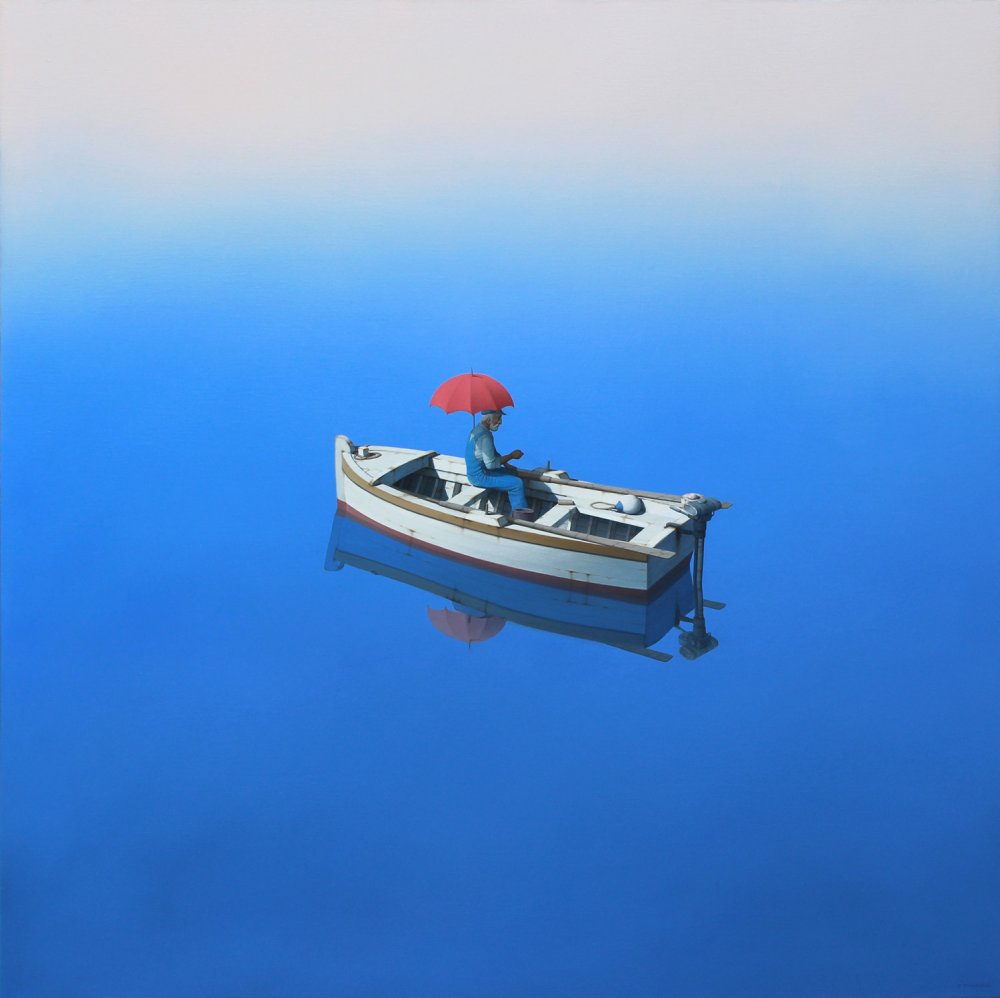 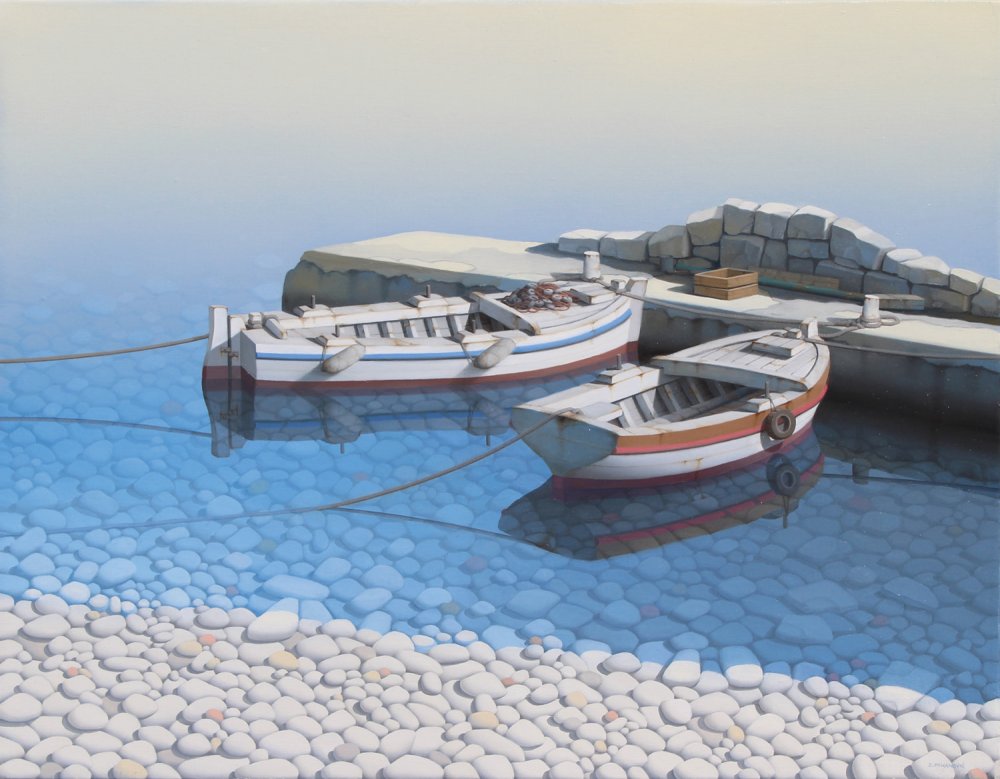 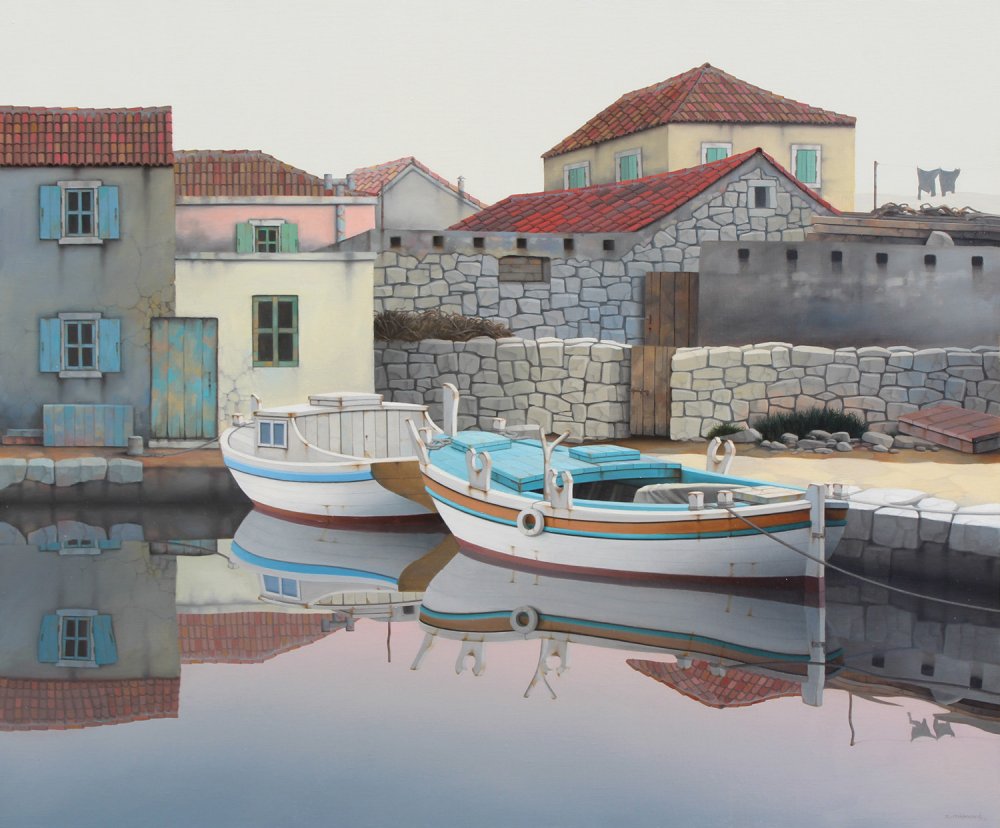 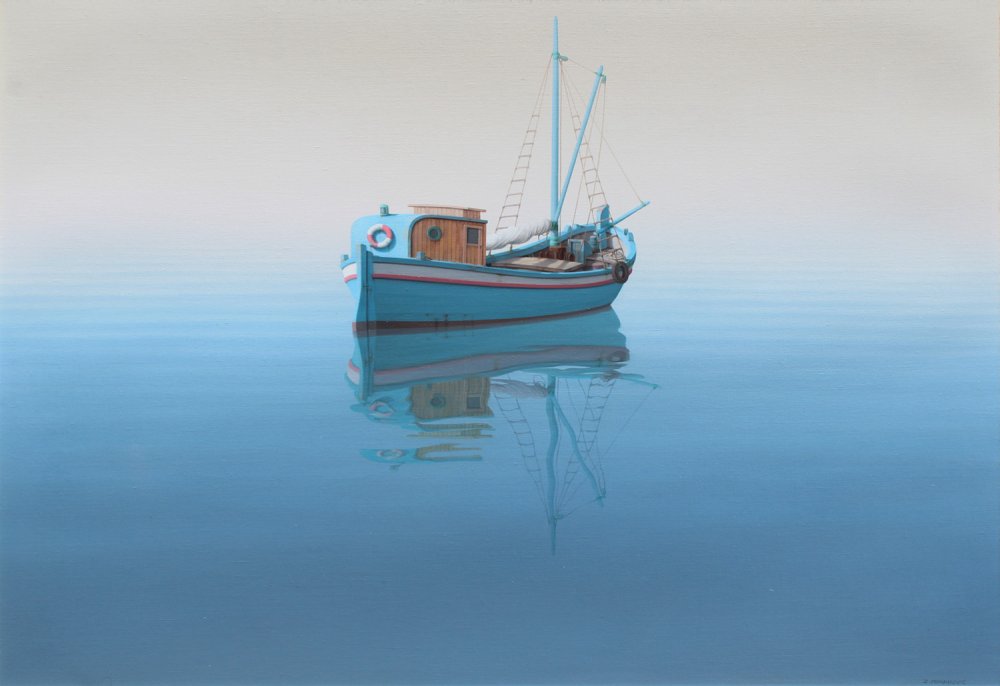 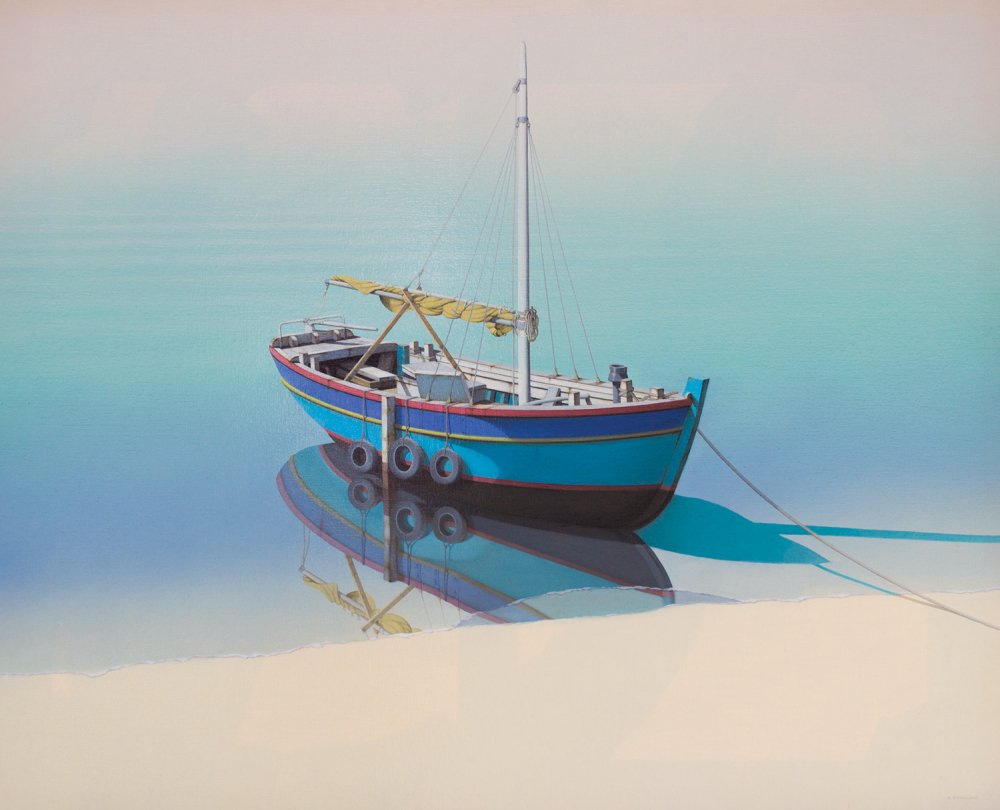 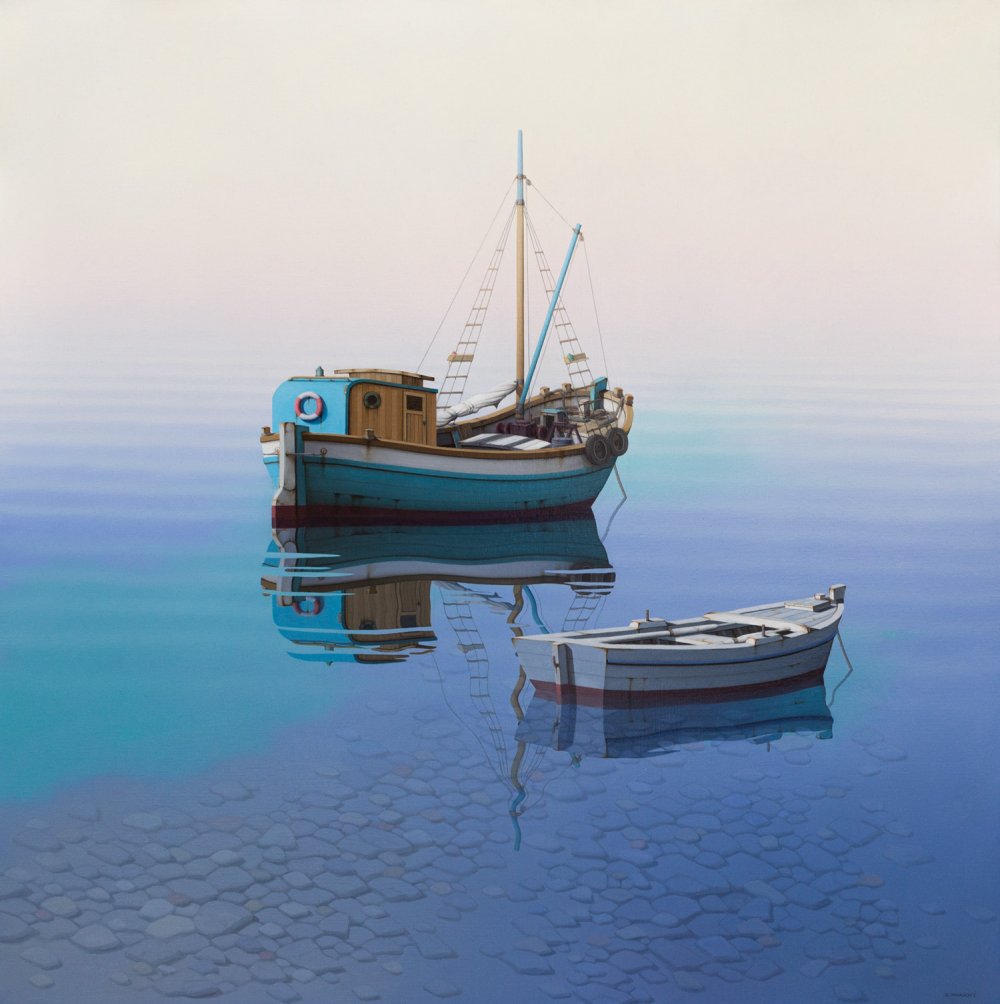 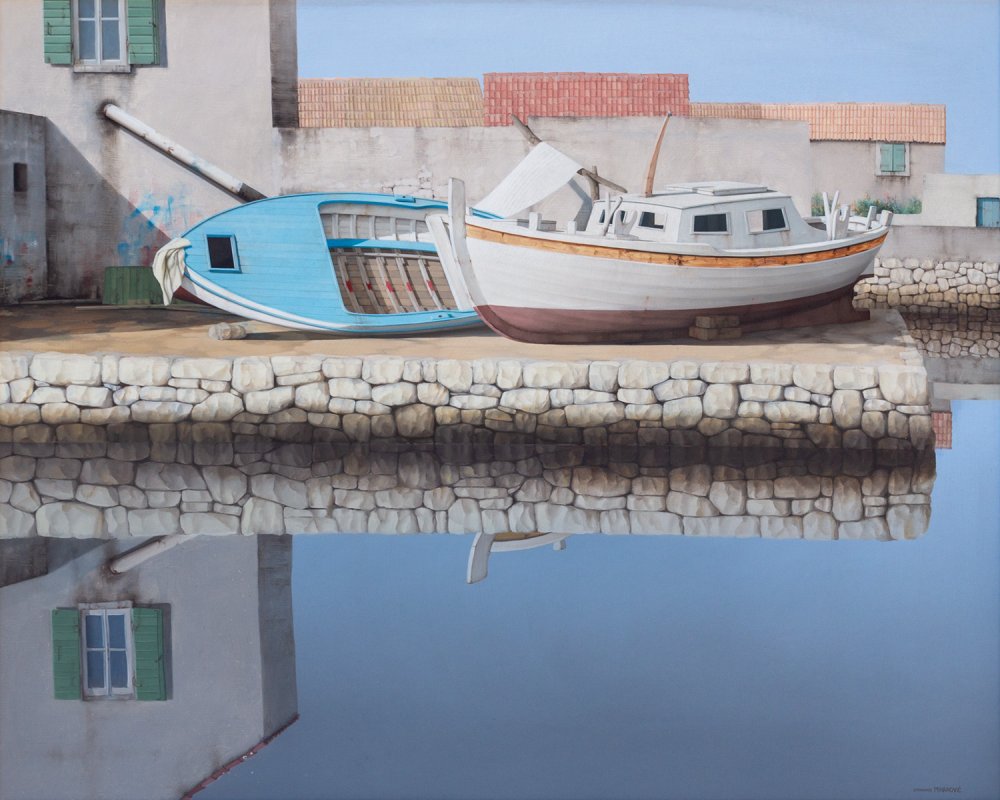 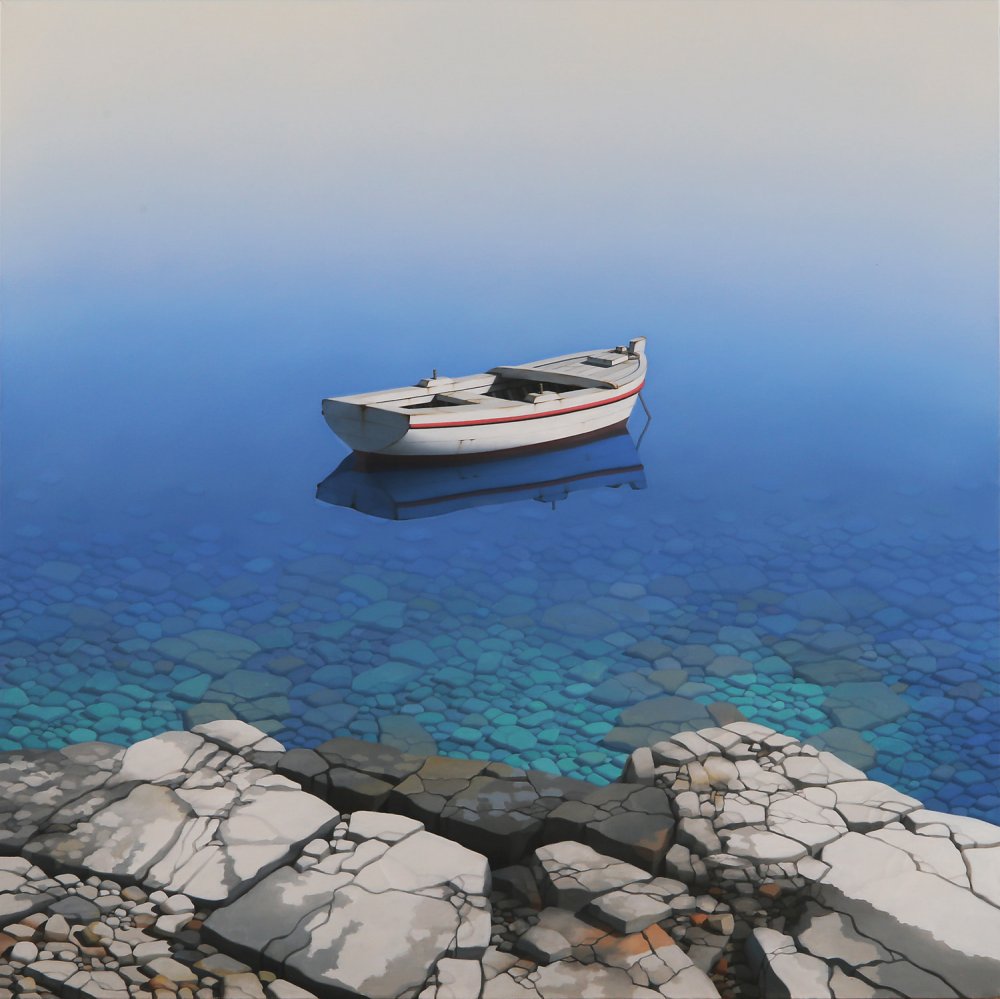 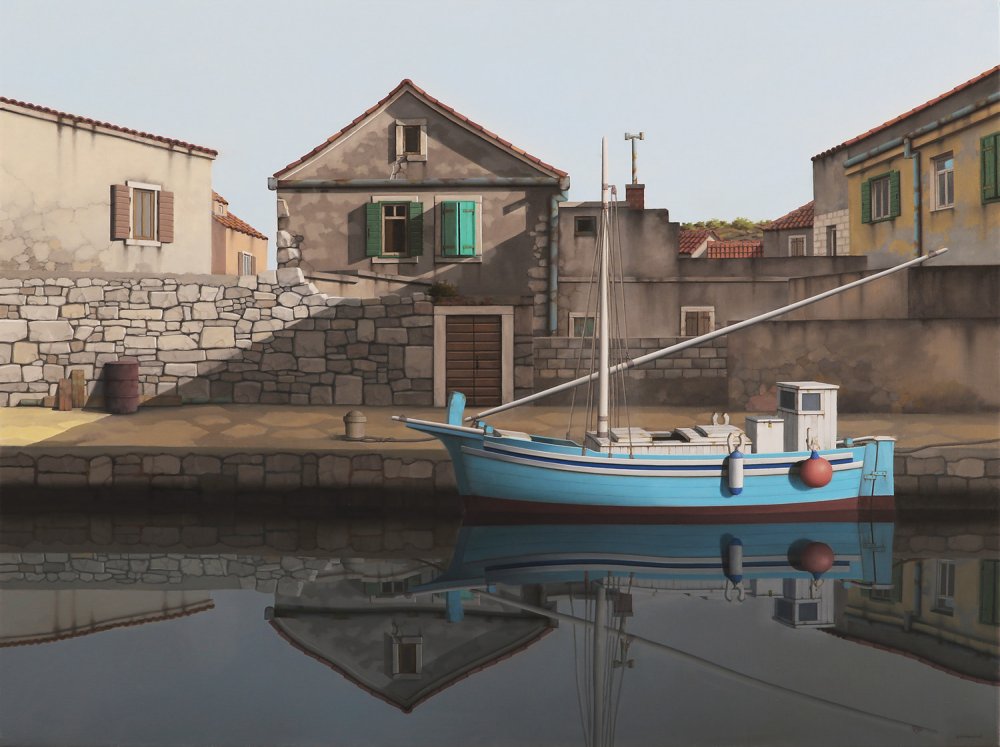 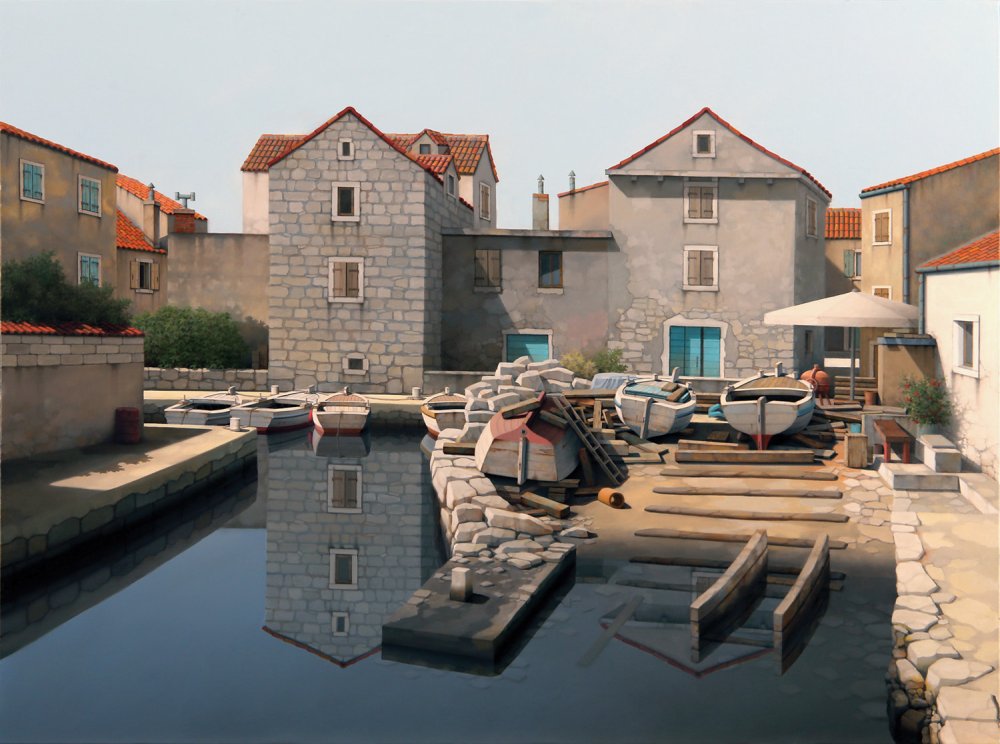 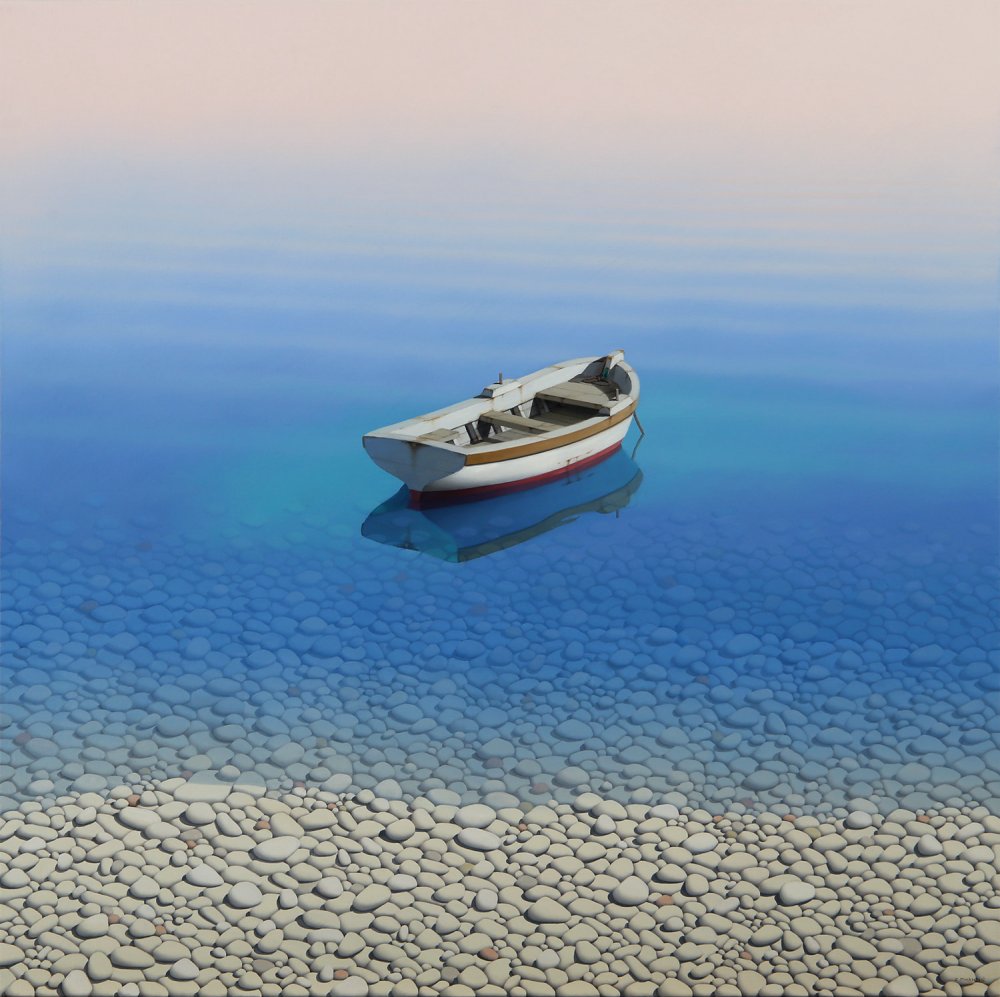 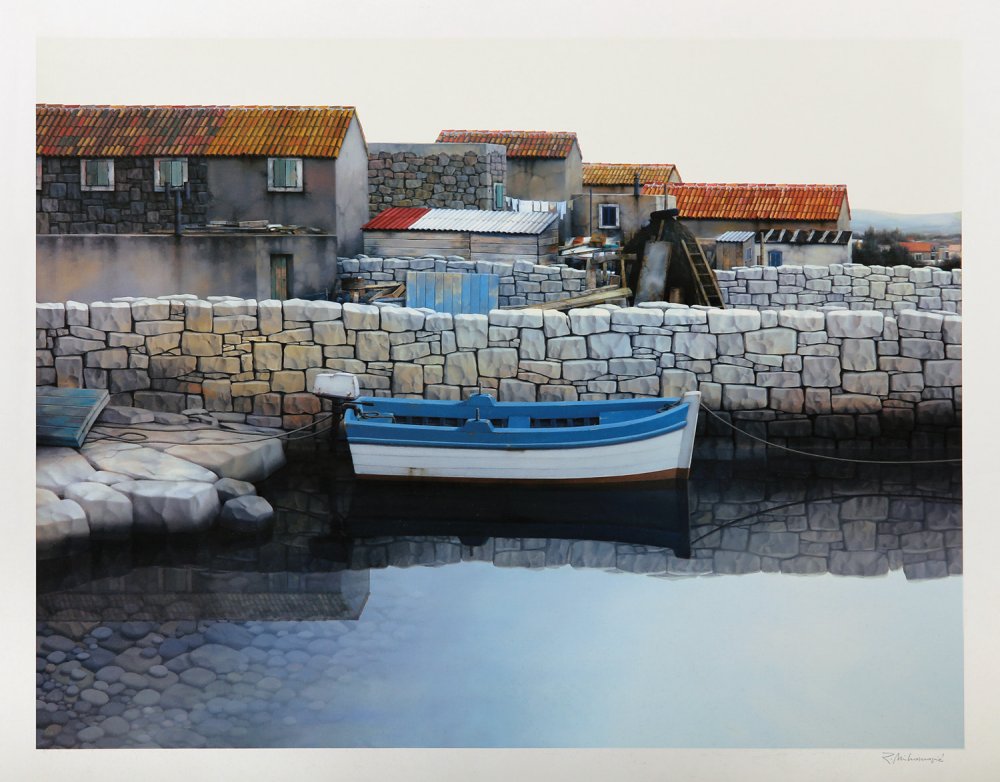 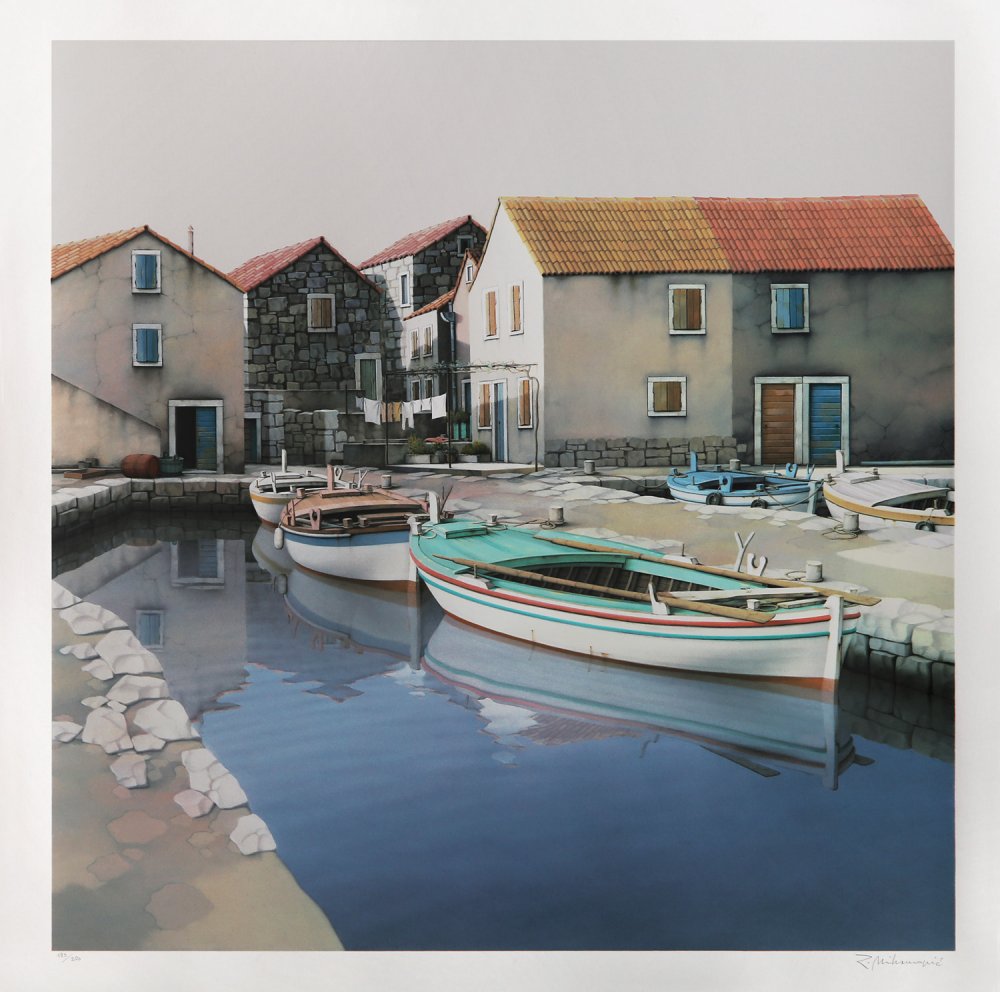 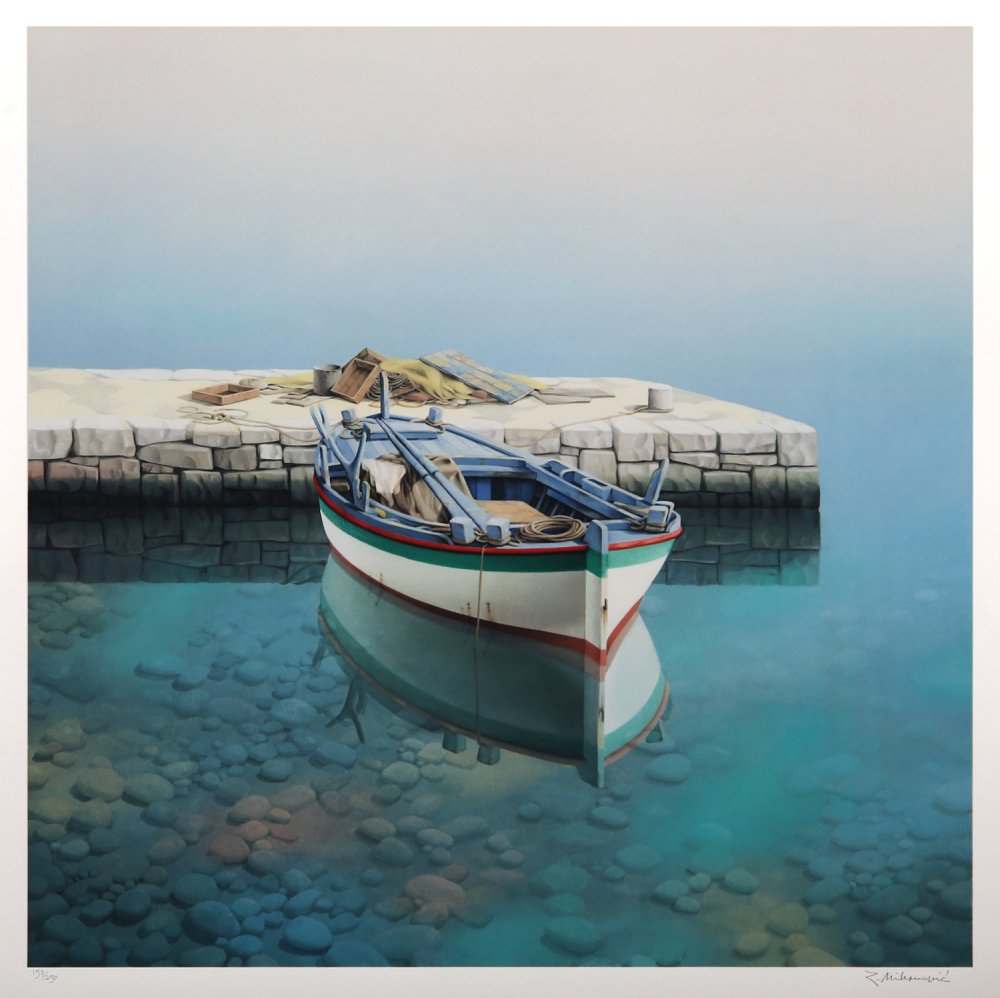 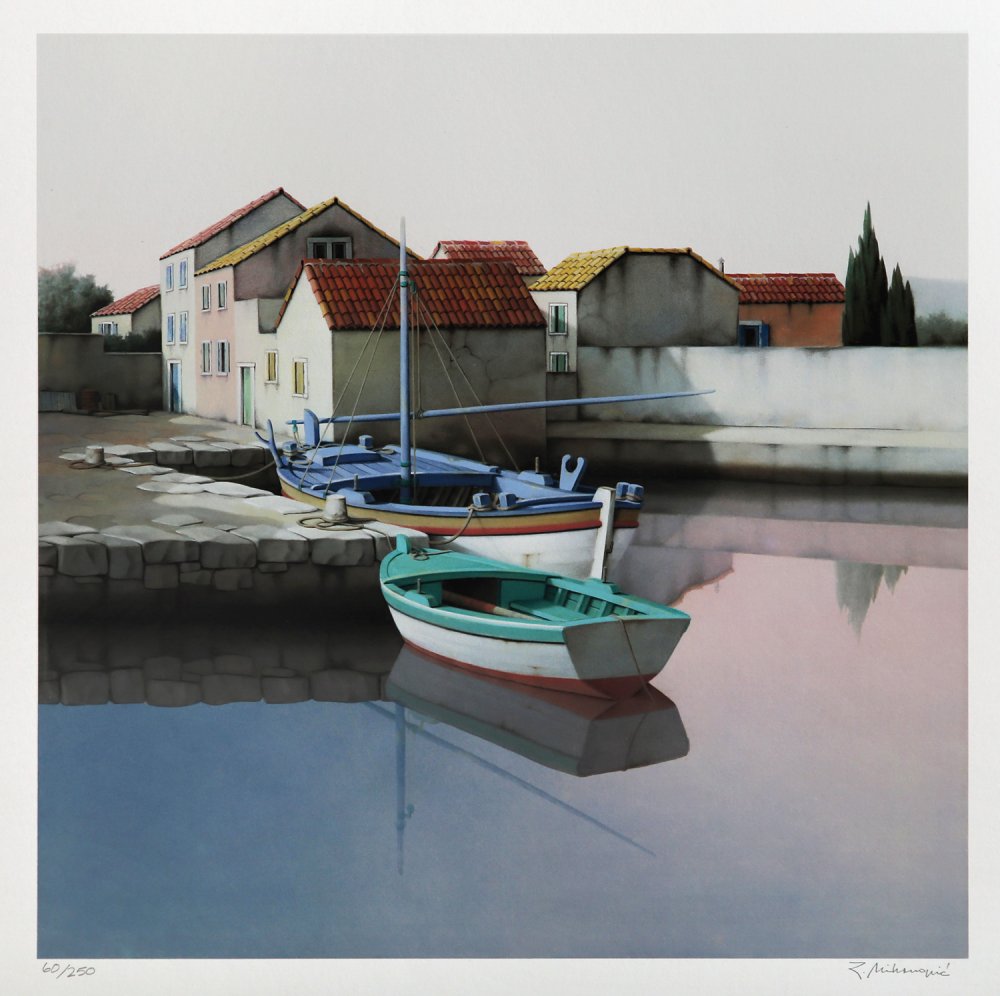 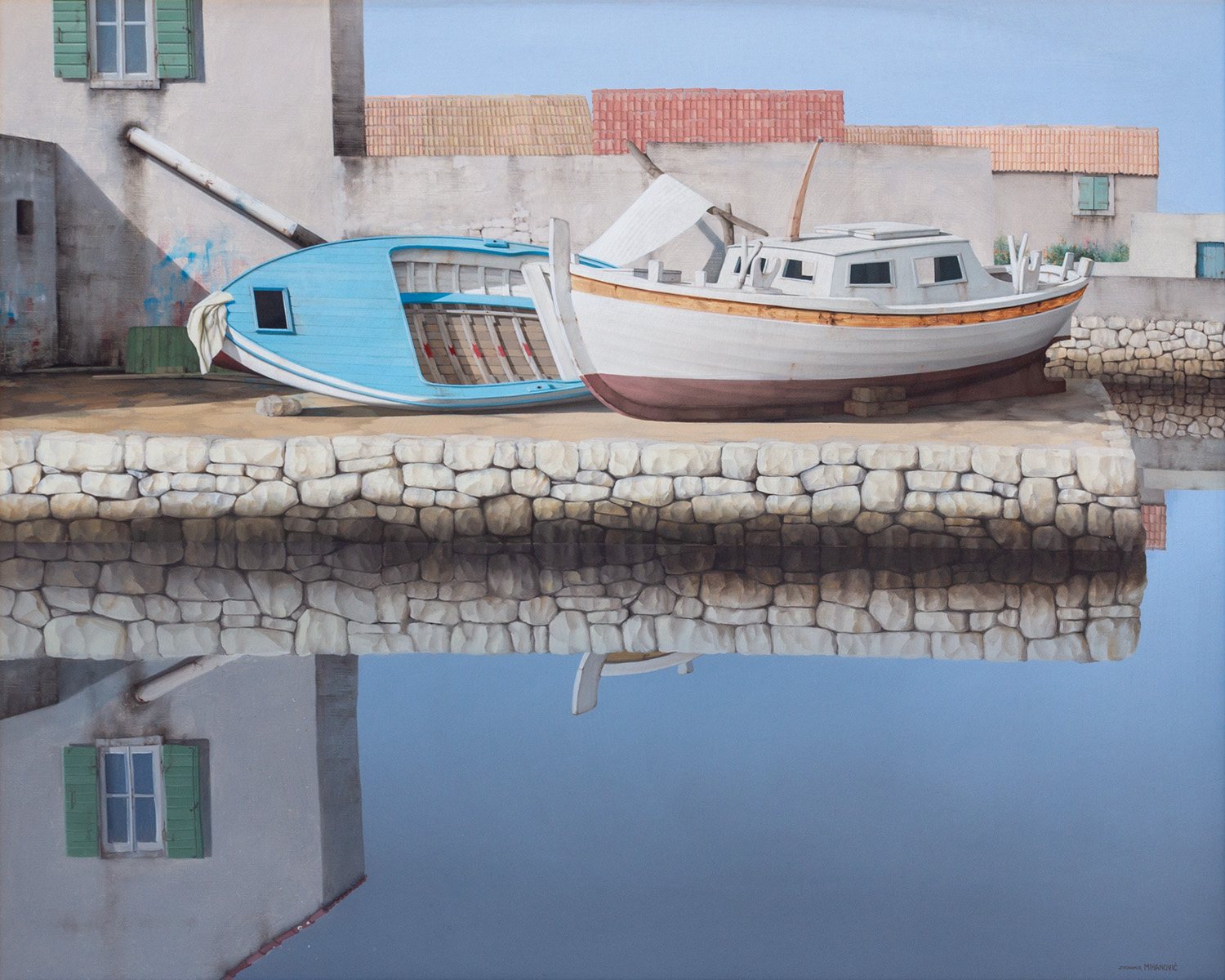 Zvonimir Mihanović
Zvonimir Mihanović was born in 1946 in Sitno Donje in Poljica near Split, Croatia, to father Srećko and mother Darinka, and had two brothers (Marin and Vjekoslav) and three sisters (Nedjeljka, Slavica and Davorka). Mihanović’s exceptional talent as an artist was recognized at an early age. This was later confirmed in 1962 when he won first prize for his portrait painting of his mother at the age of sixteen, which was exhibited in the Salon of Young Artists. In 1965, at the age of eighteen, he had his first one-man show in Split, followed by another in Zagreb, which qualified him for entrance into the Academy of Fine Arts located in Zagreb. He then completed his studies at Pedagogical Academy in Split in 1969 and studied at the Accademia di Brera in Milan, Italy.

Mihanović traveled to Paris in 1971, where he began his painting studies at the l’Ecole des Beaux-Arts at the studio of the French painter Albert Zavaro which he completed in 1976. While Mihanović studied classical painting, he carried out various jobs and painted portraits of tourists to support himself and finance his education. To learn the craft of classical painting, he explored museums and galleries in Western Europe and the United States and perfected his skill by making sanctioned copies of paintings by the old masters. Due to his adept ability and natural talent, it was to no one’s surprise that Mihanović’s paintings quickly gained interest in Paris. In 1978 one of Mihanović’s paintings was exhibited in Paris at the Salon d’Automne at the Grand Palais. He received great reception and recognition, and his painting won the “Best of Show” honor for the “realism” division. It was here that major art dealers recognized his work and introduced him to the international art scene. Mihanović then signed an exclusive contract and began working with the prestigious Wally Findlay Galleries.

Many Croatian art historians, such as Igor Zidić, Joško Belamarić, Duško Kečkemet and others, have praised Mihanović’s painting opus. In 1996 his work was exhibited in the Croatian Pavilion at the Atlanta Summer Olympics. The following year he was honored by UNESCO in Paris with an exhibition of his work as part of a celebration of the cultural history of his beloved city, Split. That same year Mihanović was awarded the highest cultural honor his country can bestow: The Order of the Morning Star. In further recognition of his talent, his native country, Croatia, issued postage stamps, which carry his beautiful images throughout the world.

Zvonimir Mihanović’s work is collected and exhibited internationally. The Museum of Modern Art, Zagreb, and other European museums avidly collect his work, as do collectors from Europe, Latin America and the United States. He has had numerous one-man exhibitions at Findlay Galleries in Chicago, Palm Beach, New York and Beverly Hills.

“The realism in Mihanović’s paintings in no way represents actual reality, but rather, the perfected hyper- realistic visualization shows the artist’s enhanced recollection of distant memories and an idealized, elemental, and from ingrained childhood encounter with the phenomenon of the sea and the maritime landscape of the Adriatic coast. Some paintings recall an abundance of summer radiance that creates feelings of pure joy, while others epitomize a recollection of that unique moment when one experiences the beauty of a wondrously calm early morning or late afternoon, filled with inner peace and a feeling of complete oneness with nature. How much inspiration can one moment of recollection contain? Sometimes, enough to last a lifetime.

Mihanović’s paintings involve a latent yet deliberate and unavoidable removal from reality. The piers are empty, the fishing boats are motionless, and the sea is at a perfect standstill. Fishermen who occasionally appear on the canvas are consumed by their tasks and have no connection to the audience. – they live in their own world, disconnected from the hectic pace of an urbanized rhythm. The painted figures communicate only with the sea, using their fishing poles and oars. In doing so, they gently disturb the calm water, leaving behind ripples that remind us that time does in fact exist, even when it appears as though it stands still before the remarkable, unmoving sea.

Mihanović’s primary motifs – the seaside villages, piers, boats and the traditional world of fisherman – depict a landscape that is slowly vanishing from our world today. This realization infuses the paintings with an atmosphere of non-reality and a nostalgic desire to, at least on the canvas, suspend the primordial experience of the difficult, yet beautiful archaic life on Croatia’s Adriatic coast. They tell us that after all the challenges of searching for one’s true voice amidst the manifold artistic directions of the 1970s in Paris, Mihanović found his inspiration in his roots, in his memories of a happy childhood spent by the sea when he first experiences the enchantment of blissful summer serenity.”

“Through its pervasive and balanced dispersal, the light in Mihanović’s paintings builds its own symmetry into his strictly measured architectural compositions. The modulations of light and color are the fibers of a relatively small number of iconographic variables and, in some ways, the most important formal aspect of his paintings. But above all, the colored light, a trademark of his characteristic style, functions primarily as a symbol of time and space unity in which all things are joined in a metaphysical whole.”

“… It is as if time stands still… like those rare moments that are fixed in our psyche, from childhood and from nature… moments that invoke but also symbolize a long-gone happiness, a care- free existence, another world and life, free of the chaos of modern-day living.”