Taka Ishii Gallery presents Yoichi Umetsu’s solo exhibition “Green Sun and Renkon-Shaped Moon”. This is the artist’s first solo show with the gallery, and features a selection of ceramic works that he has been working on in recent years, as well as more than 30 drawings of various sizes, and ceramic tiles made in cooperation with Otsuka Ohmi Ceramics Co., Ltd. 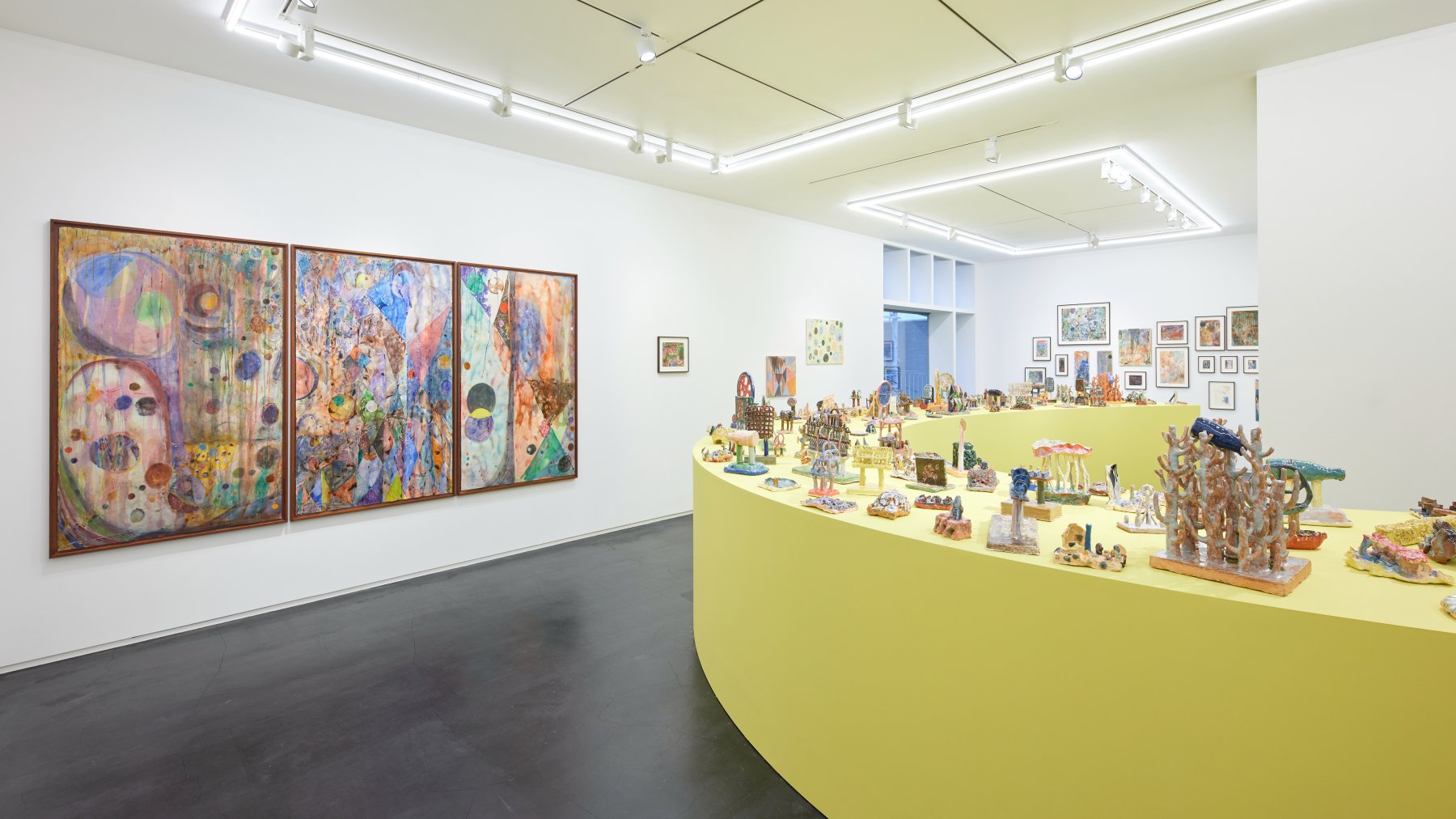 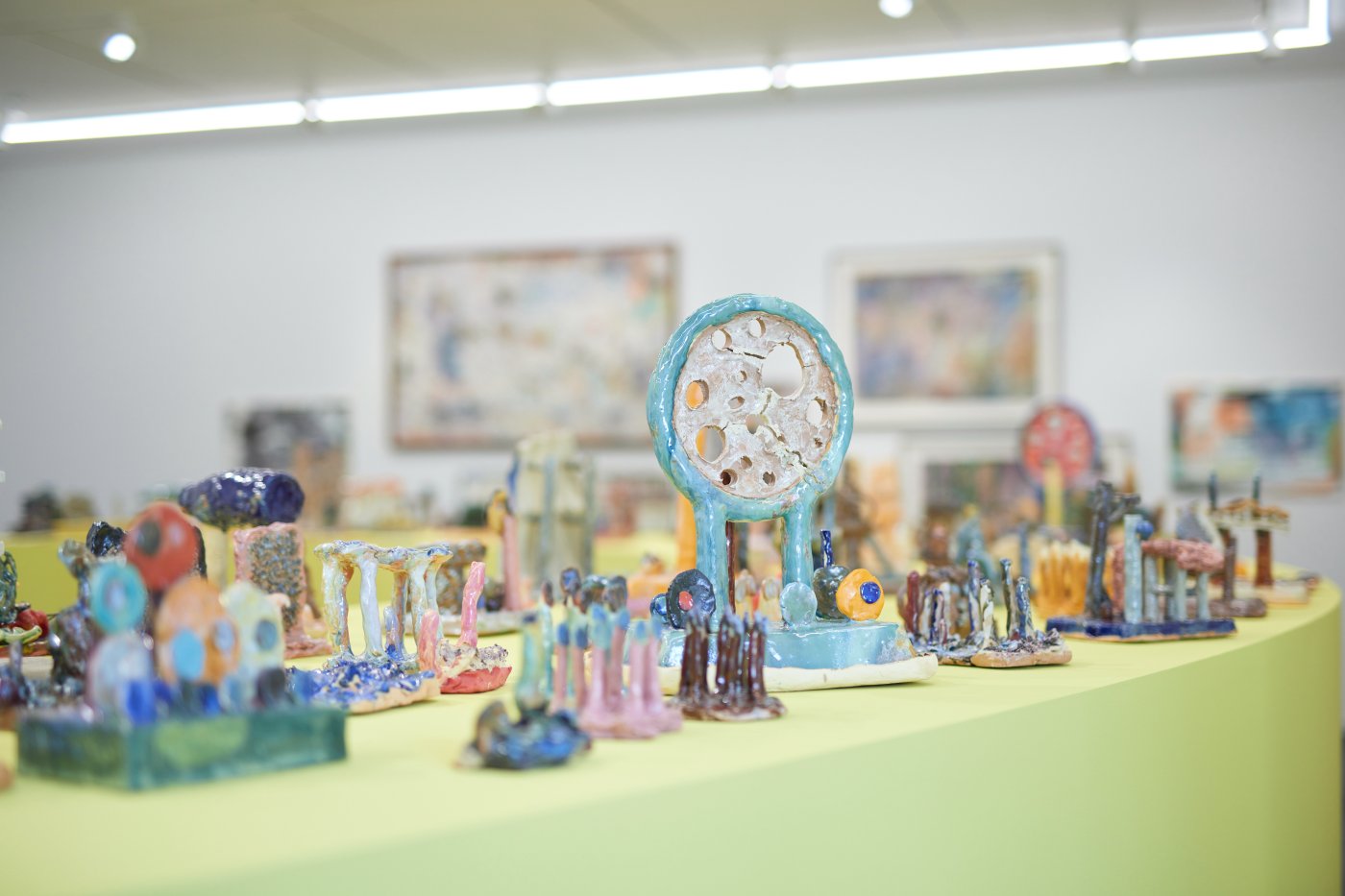 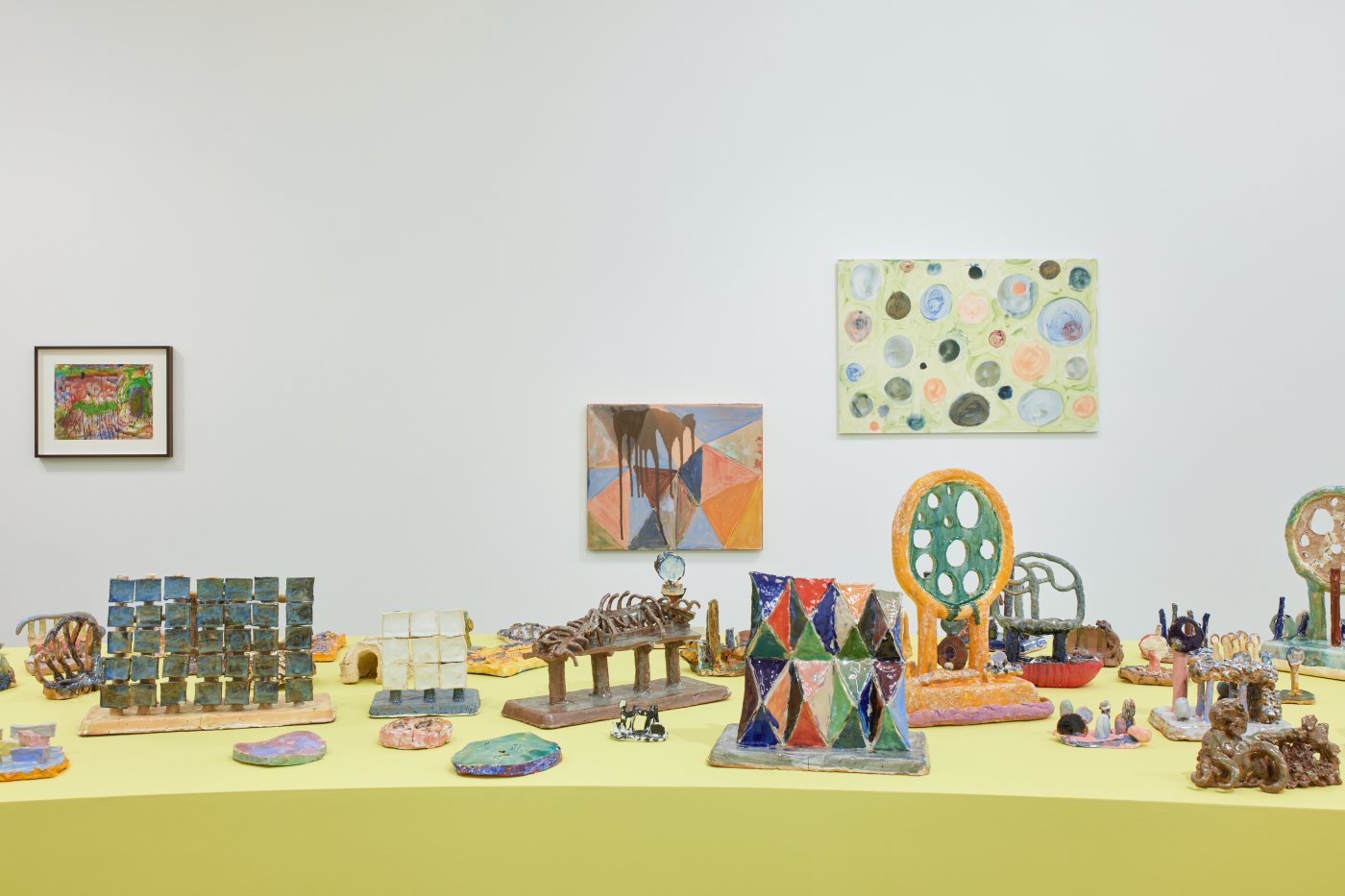 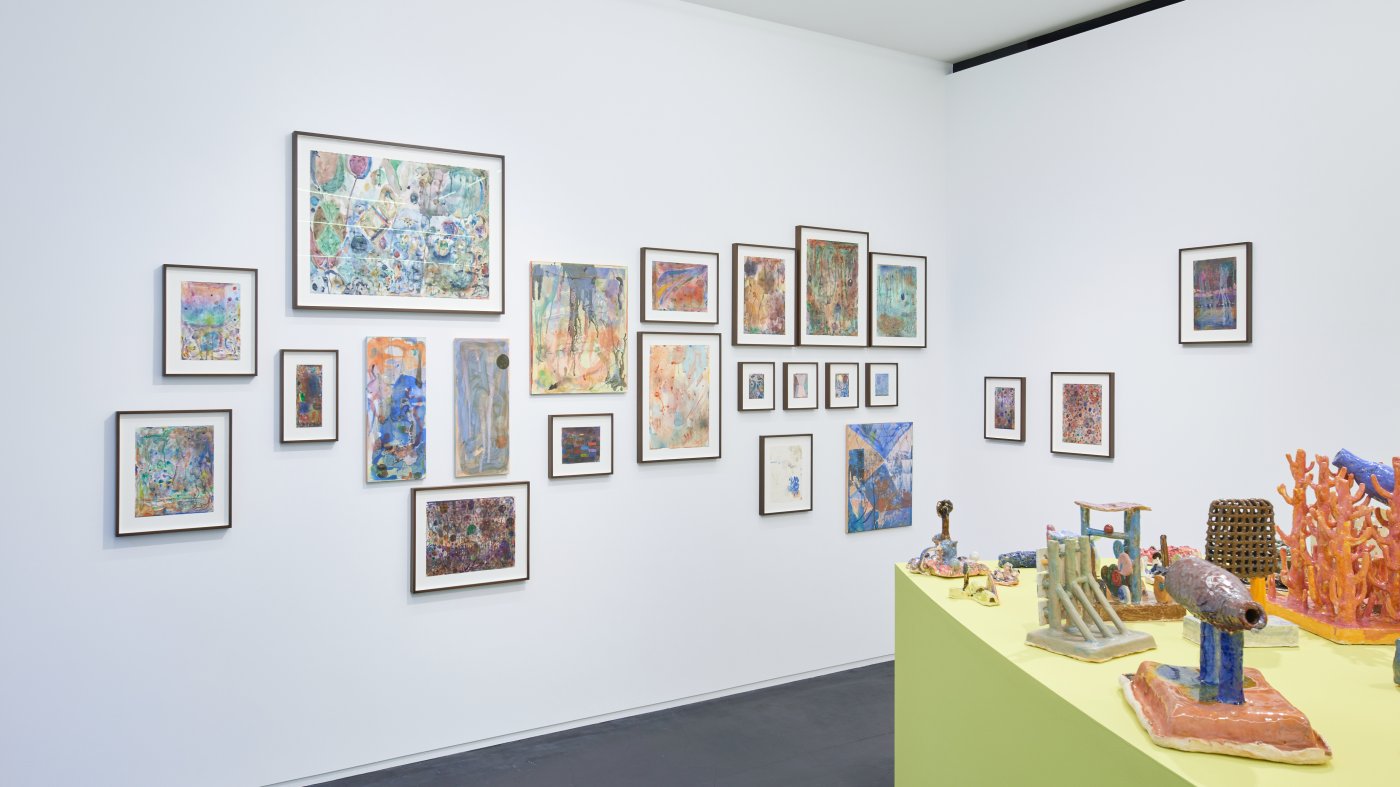 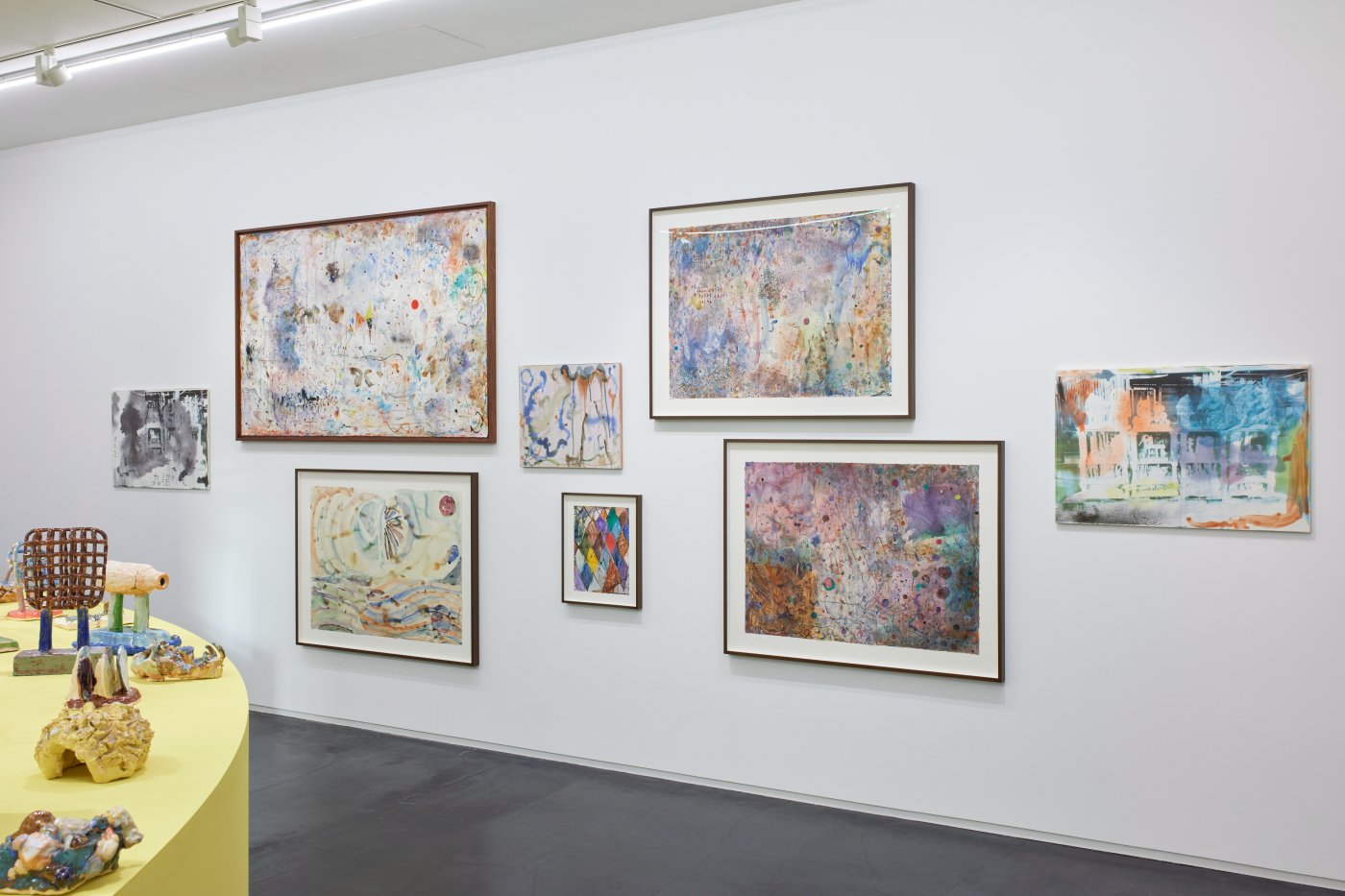 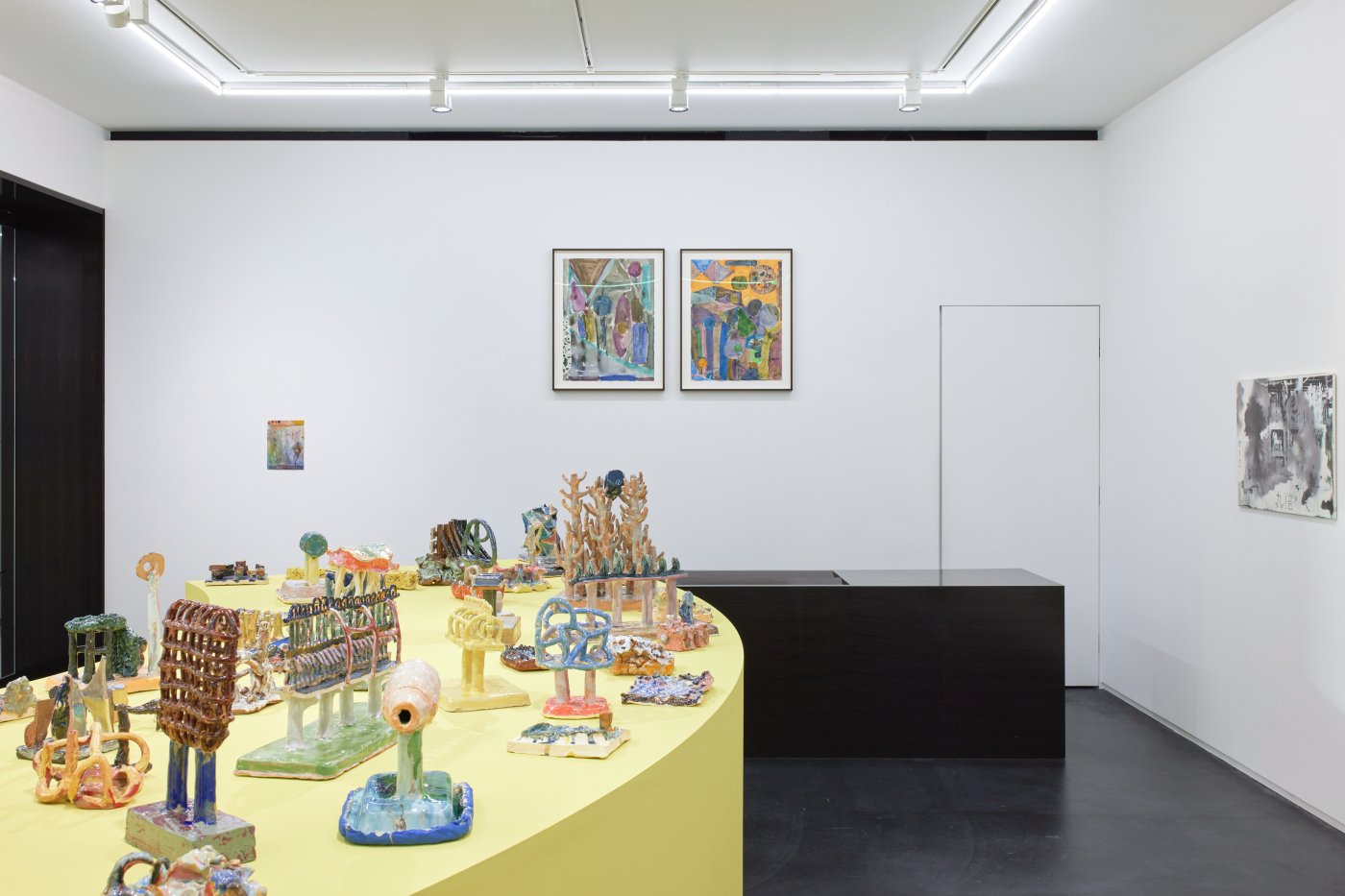 “People become stuck in an unexpectedly insignificant place and suffer. The so-called Japanese-style painters cannot move forward, marked by the term ‘Japanese-style.’ The so-called Western-style painters cannot either, weighed down by oil paint on their backs.” Kotaro Takamura’s essay “Green Sun,” which begins as above, had taken me by surprise for its content that appeared to resonate with issues I have been concerned with for quite some time in recent years. Written over a century ago, this text is not only a theoretical essay on art, but also seems to suggest how we should live in the midst of the pandemic that is currently upon us, as well as in this unsettling global situation. I wish to consider and visualize the fundamental question, “are people and artists defined by the state?” from the point of artistic language.

Umetsu has contemplated and put into practice from different angles the fundamental questions of “what is art?” and “what does it mean for people to create?” Umetsu is known for his representative self-portrait series in which he uses his own body to convey the history of art reception in Japan, as well as video works documenting his performances. The scope of his practice however, has become increasingly multifaceted in recent years, from establishing the art collective “Parplume” to operating a non-profit gallery and curating exhibitions, writing texts, and engaging in the production of ceramic works that have been newly introduced to his practice since two years ago. The solo exhibition “Pollinator” held at The Watari Museum of Contemporary Art in 2021 served to shed light on the entirety of his practice, which until then had been little known. Among his oeuvre, “The City at Dusk,” consisting of 140 ceramic works, could indeed be described as a characteristic piece in which sci-fi-like imagination coexists with a sense of order that might be observed in the proliferation of eukaryotic organisms.

In 2021, Umetsu began producing ceramic works by renting a space in a pottery studio in Shigaraki, which is recognized as one of the Six Ancient Kilns in Japan. Ever since he has attempted to deepen his inquiry into the concept of “craftsmanship” in contemporary art, taking “ceramics”–an industry that has long supported Japan since the Meiji era–as a starting point. In July this year he organized the “Ceramics and Art” exhibition that took place across multiple venues in the Shigaraki area in the form of an independent art festival, where he highlighted not only pottery and ceramic works produced by artists, but also the infrastructure that underpins them. While ceramics has been attracting attention in contemporary art in recent years, Umetsu does not consider his work to be merely venturing into the “organic” or indicating an inclination to “return to handwork.” Rather, it is grounded upon his active reference of the Mingei (folk art) movement as advocated by figures such as Yanagi Soetsu and Kawai Kanjiro, and the “merits and demerits of Orientalism” that accompany it.

Umetsu’s drawing works harbor a complexity that cannot be consolidated into a single style of expression. Reflecting interplays between poetry and the laws of physics, I-novel-esque sensibilities, and principles of formalist painting, they exist as independent works and at the same time are organically connected to one another. This exhibition, presents a selection of approximately 100 works that have been created through shifting back and forth between the realms of ceramics and drawing, pottery and art, modernism and arts & crafts. Through his works and practice as a whole, Umetsu’s composite approach, which is never collated into a single conclusion or discourse, encourages us to contemplate the nature and definition of art. We welcome viewers to take this opportunity to witness the foundations of the artist’s thinking and the further developments of his future endeavors.

Yoichi Umetsu was born in 1982 in Yamagata Prefecture, and currently lives and works in Sagamihara. He graduated from the Department of Fine Art at Tokyo Zokei University. In addition to producing work in various mediums such as painting, drawing, videos featuring himself as the subject, ceramics and ceramic tiles, his practice encompasses a wide range of activities that include curating and running “Parplume Cram School” (2014~) and “Parplume Gallery,” and experience working as an editor and a writer for Bijutsu Techo magazine’s special issue “Approaches to Painting” (December, 2020). His major solo exhibitions include “APMoA Project, ARCH vol. 20 Umetsu Yoichi,” Aichi Prefectural Museum of Art (Aichi, 2017) and “Yoichi Umetsu: Pollinator,” Watari-um, The Watari Museum of Contempor ary Art (Tokyo, 2021). Notable publications include, From Lamb to Mutton (ART DIVER, 2015).