To book an appointment to view the exhibition, please click here.

“The wild is far from unlimited. It is finite. It needs protecting.” – David Attenborough

James Cohan presents Earth Kids, an exhibition of new sculptures by Yinka Shonibare CBE at the gallery’s Lower East Side location at 291 Grand Street. This is the artist’s seventh solo exhibition at James Cohan. 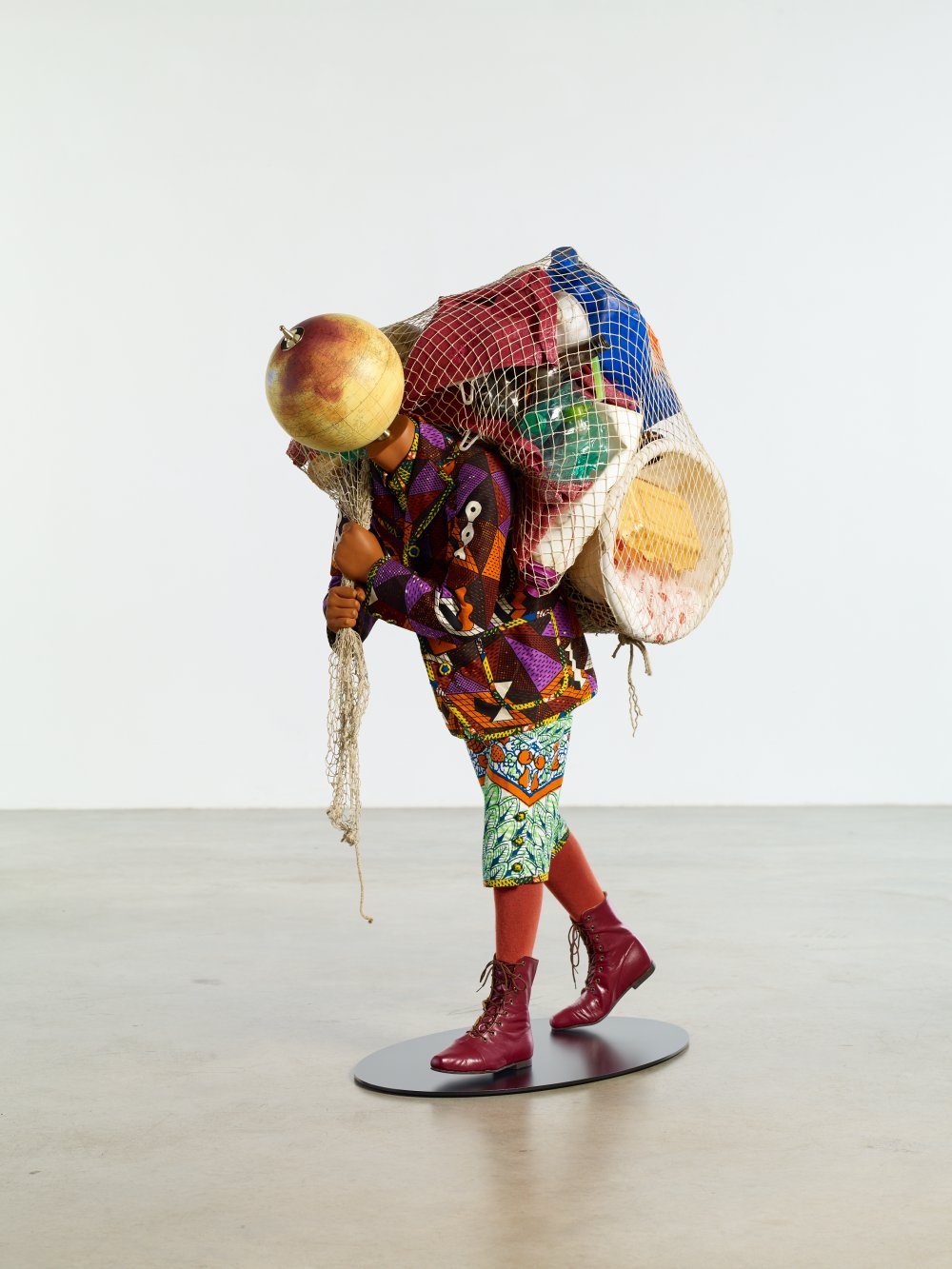 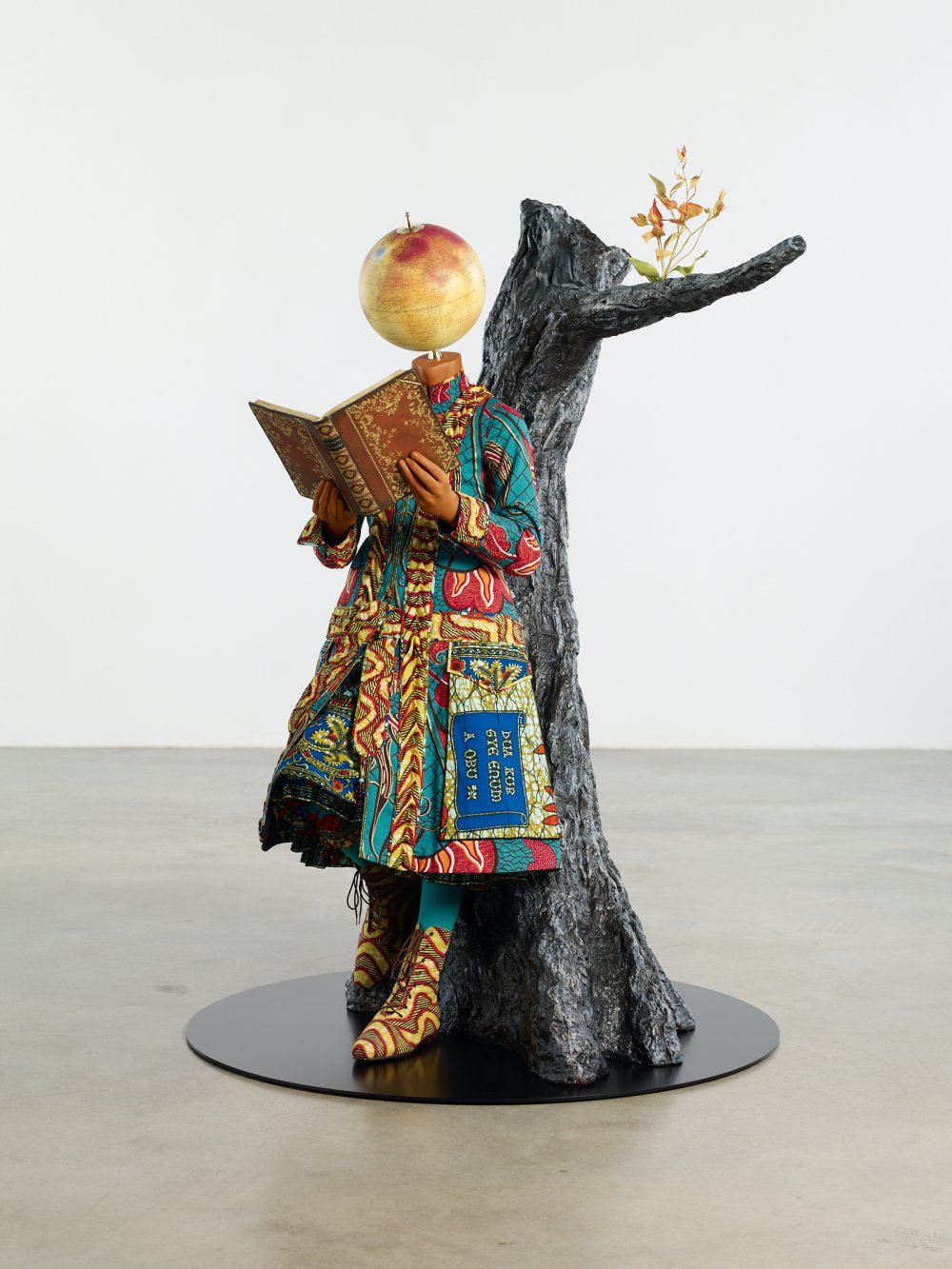 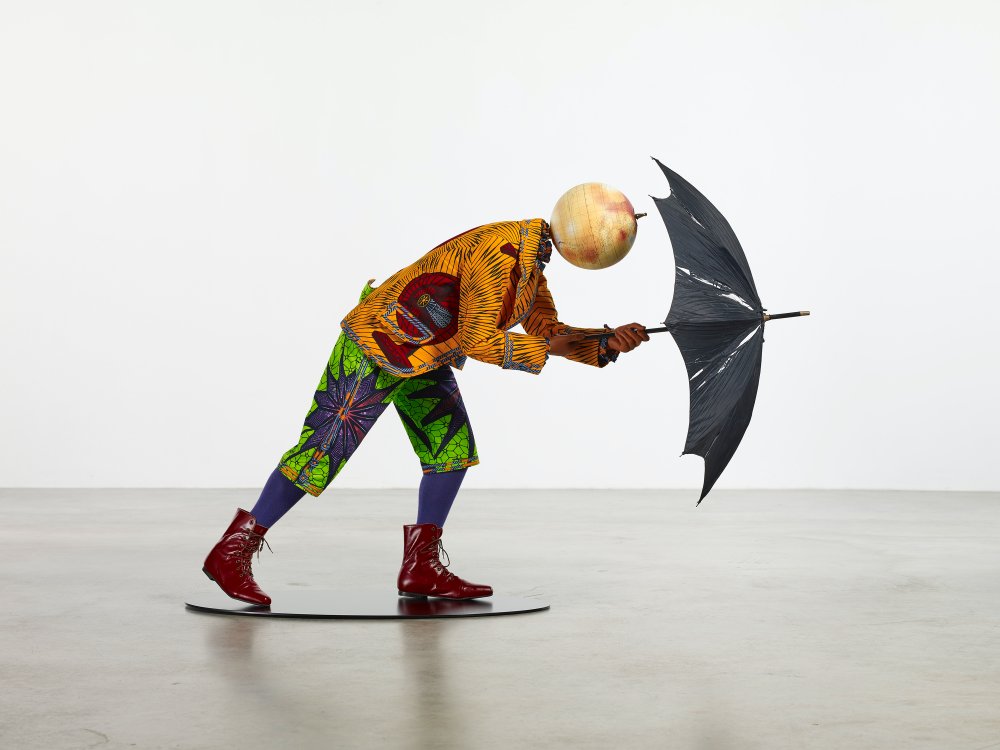 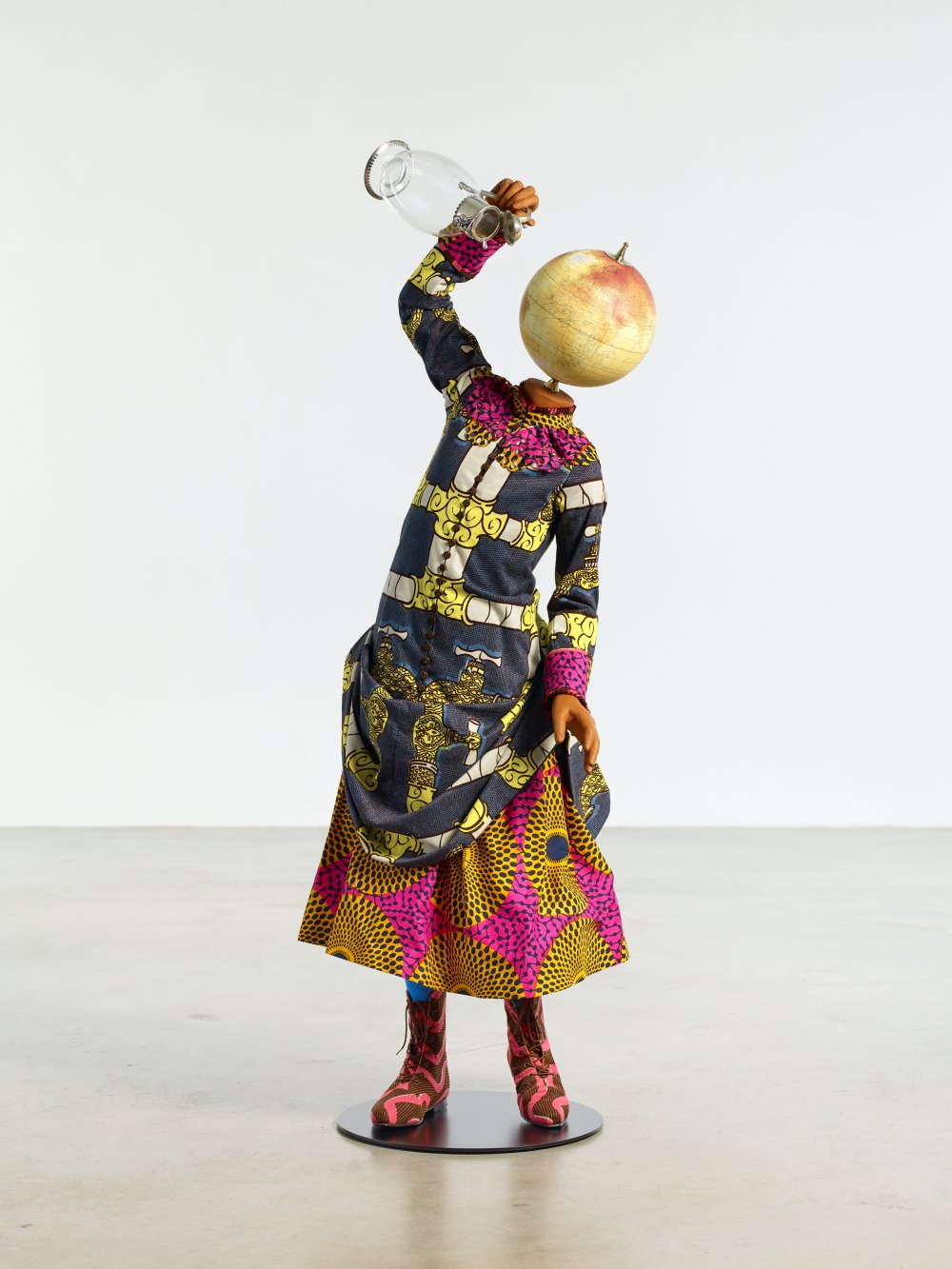 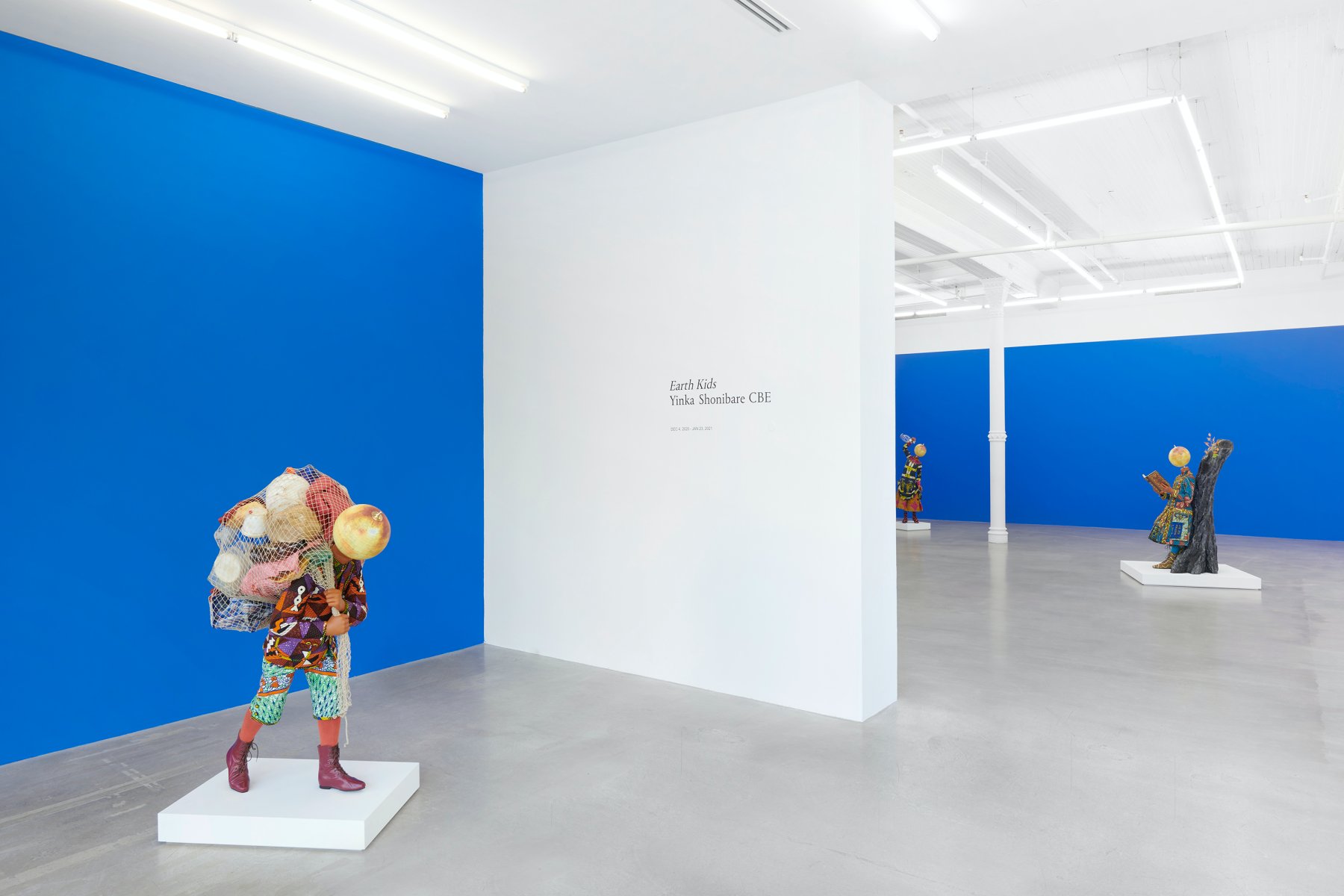 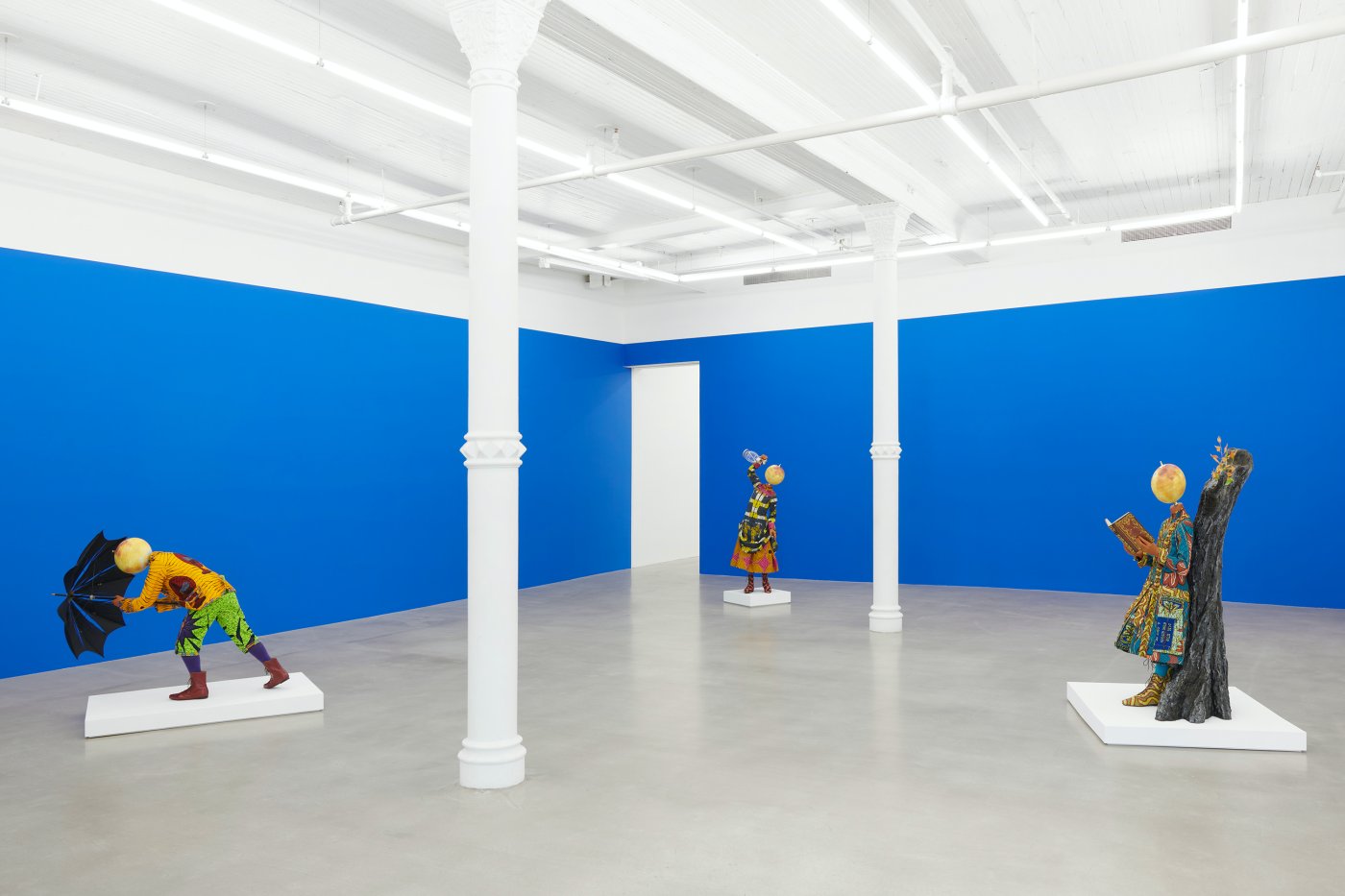 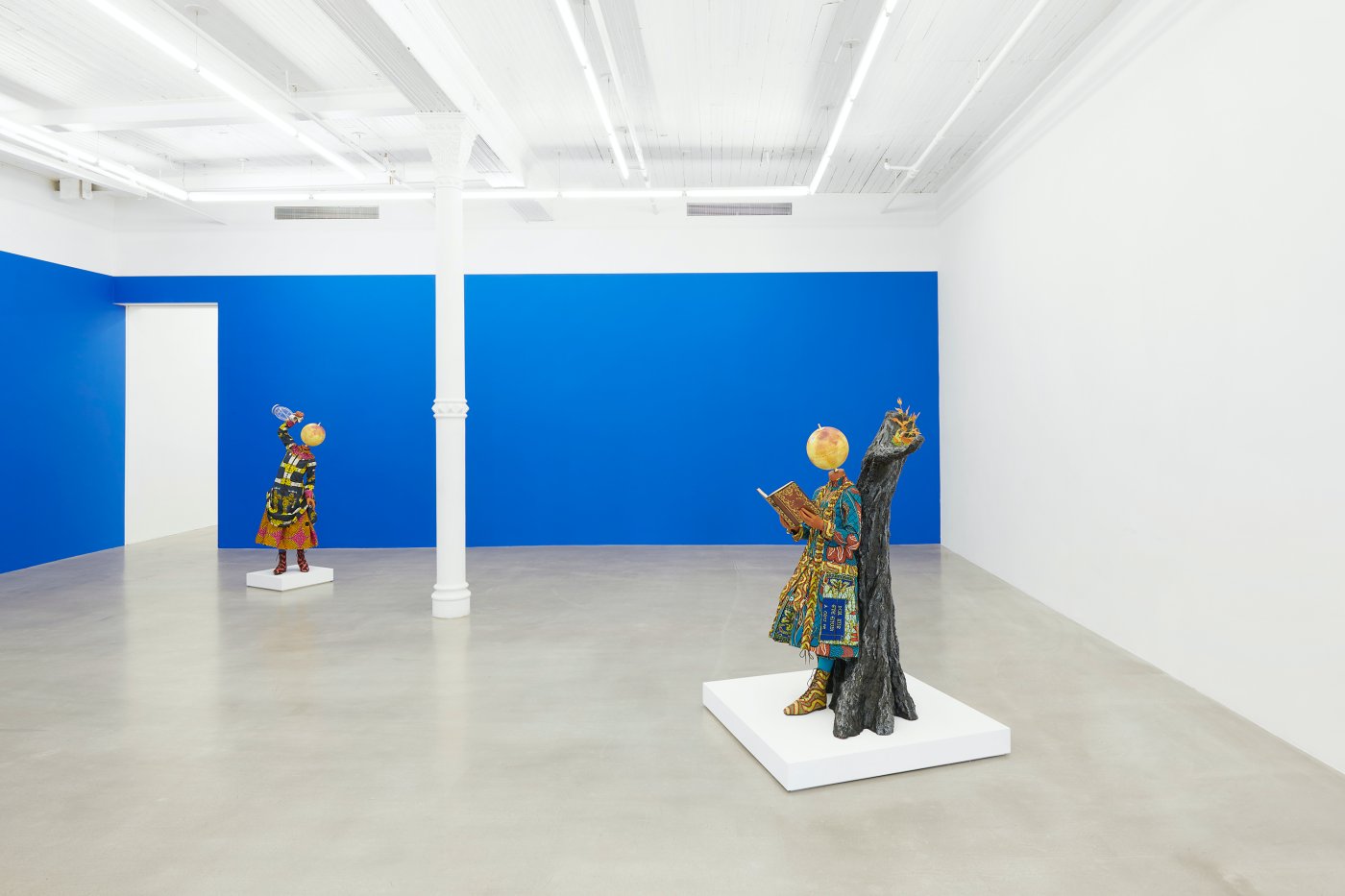 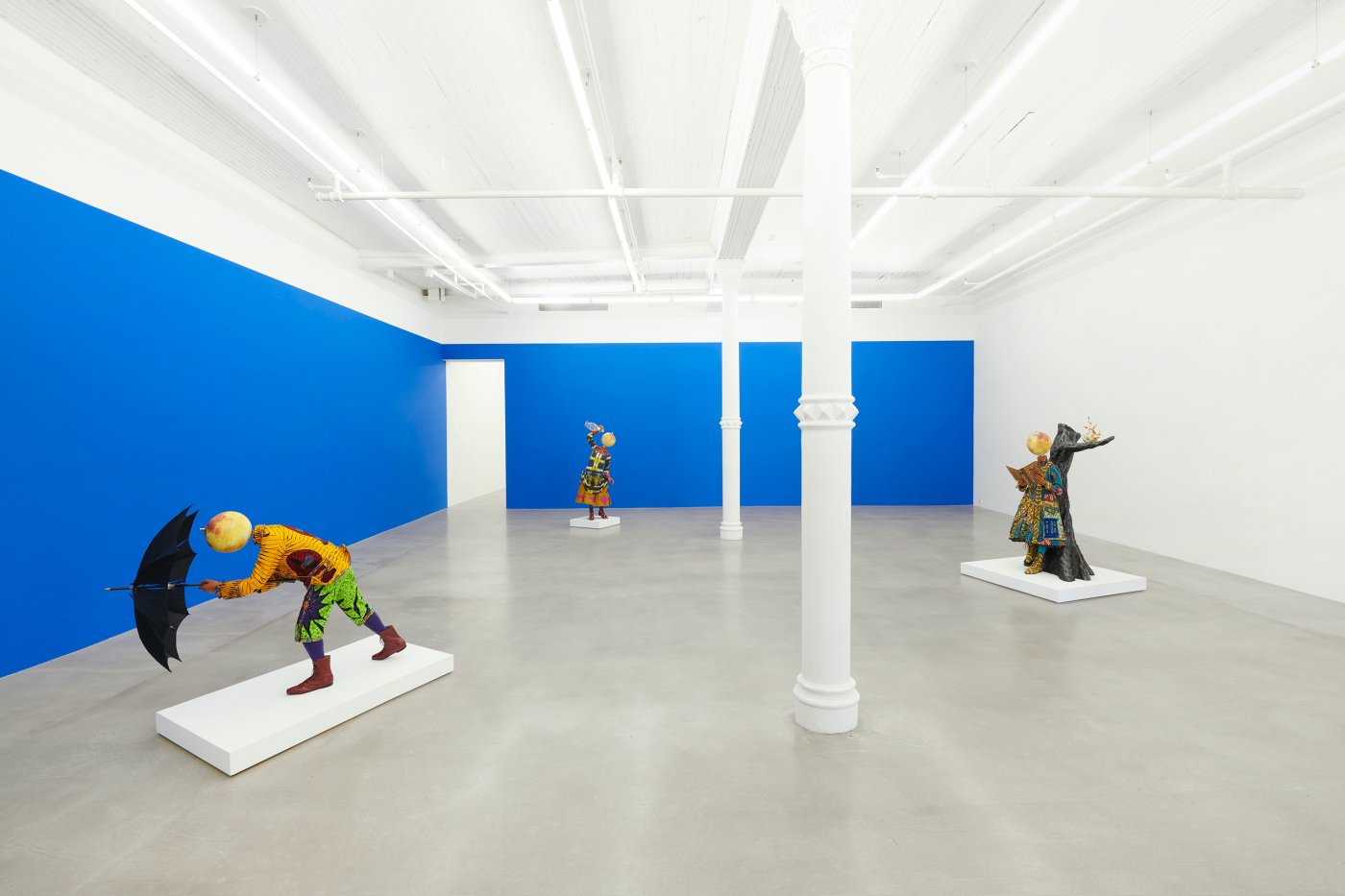 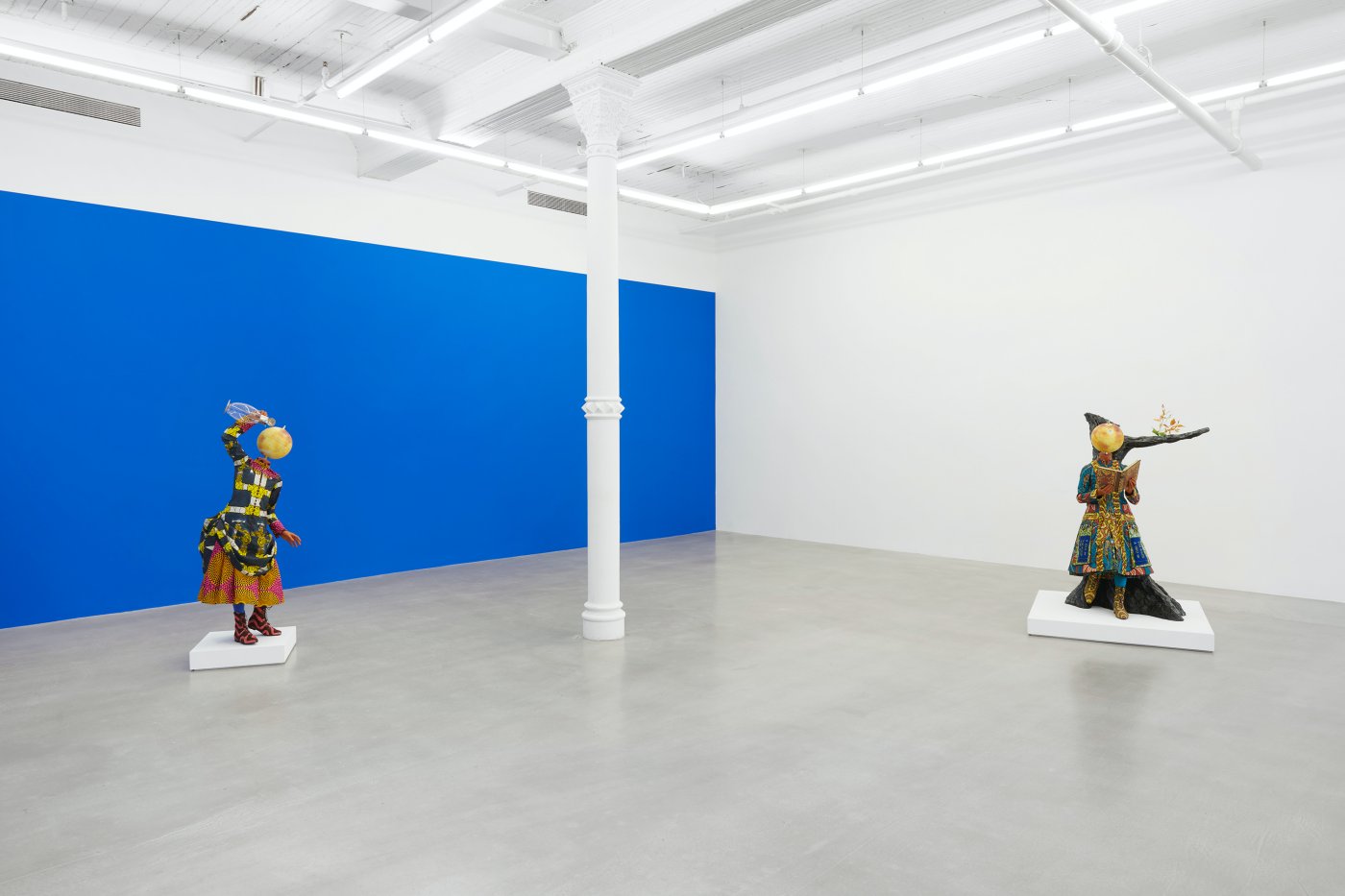 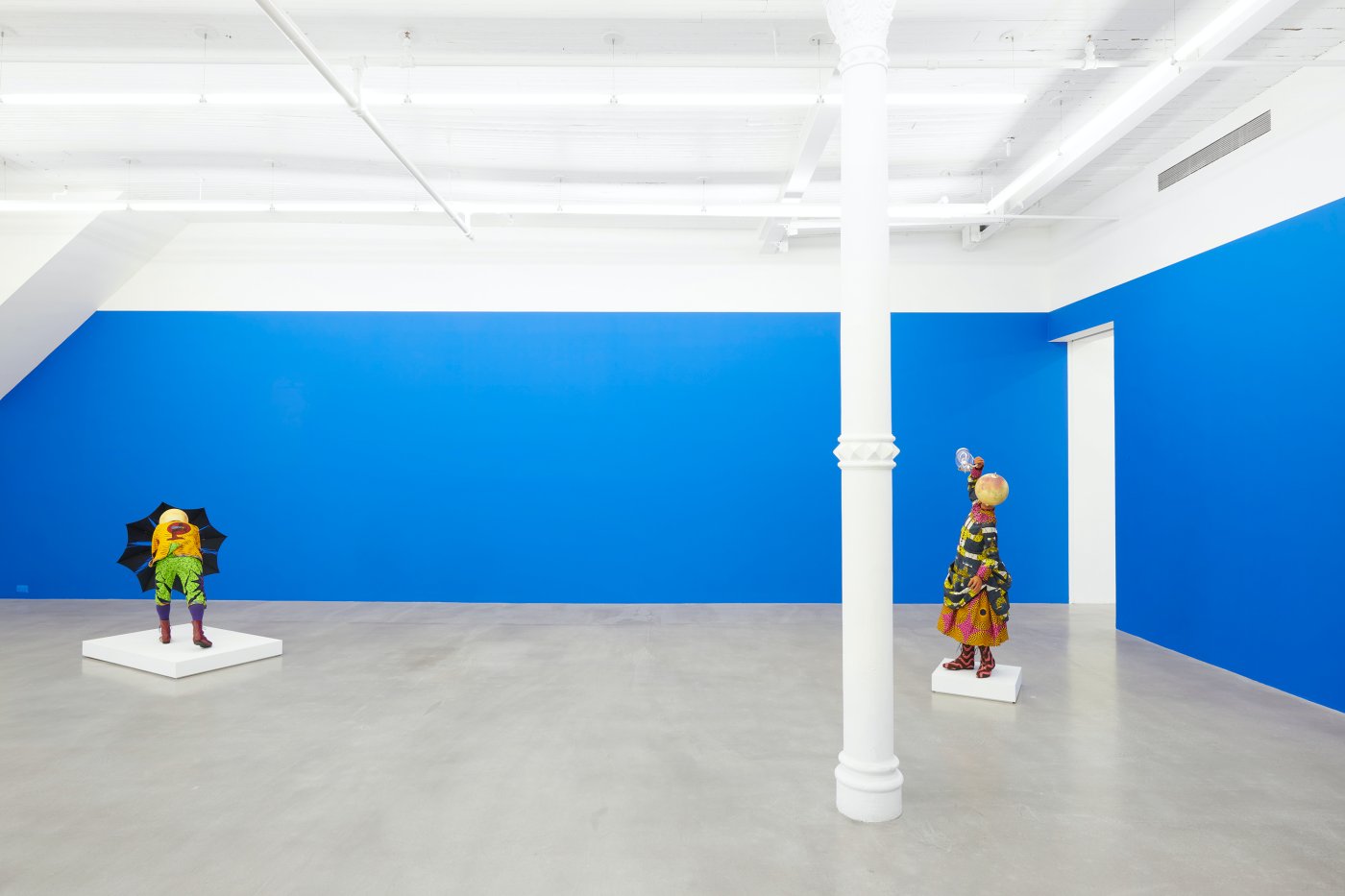 Yinka Shonibare CBE mines the past to speak of the present. Rachel Kent, Chief Curator at the Museum of Contemporary Art, Sydney, explains that Shonibare engages with, “history and its legacy for future generations, of how we live in the present, and of cycles or patterns that repeat across time despite their often destructive consequences. In this way he pricks the consciences of those who encounter his art, using beauty and seduction instead of words as his chosen weapons.”

In Earth Kids, Shonibare makes a connection between the history of colonial domination and humankind’s domination of the natural world and exploitation of its limited resources. The quartet of child-scaled sculptures champion the next generation of environmentalists fighting for climate justice—including young activists, such as Greta Thunberg—who have thrown a spotlight on the failings of previous generations of policy makers. Shonibare states that these works are a call to action to protect the planet for our children.

Each of the four sculptures in Earth Kids represent an elemental force: Earth, Air, Fire, and Water. These classical elements were believed by the Ancient Greeks to illustrate the complexity of the natural world. The artist has been making work about the elements and climate change since 2008, when he created a series called Globe Children in which children were precariously balanced on a large heat-map globe. These sculptures were followed in 2010 by the Four Elements for an exhibition at the Israel Museum, and in 2015 Shonibare presented Rage of the Ballet Gods at James Cohan, an exhibition of three bodies of work about the crisis—Ballet Gods, Refugee Astronaut and Butterfly Kids.

Shonibare is interested in the generative possibilities of contradiction and ambiguity. Fire Kid (Girl) depicts a female child leaning against a scorched trunk of a tree. The work references the grim scene in Francisco Goya’s The Disasters of War, Plate 36, in which dismembered body parts hang from a tree. The girl, clad in Victorian-era garments, is reading a book about forest fires. Above her emerges a branch of budding young leaves from the burnt trunk, alluding to the possibility of redemption and regeneration.

Air Kid (Boy) is a male child figure bracing himself against a gust of wind with a ragged, Victorian-style umbrella. Like the other sculptures in the exhibition, his Victorian garments are sewn with Shonibare’s signature Dutch Wax fabric. These textiles were first produced in the Netherlands in the late 19th century, based on Indonesian batik patterns, and sold in West Africa. Since the African Liberation and Black Power movements of the 1960s, this fabric has been celebrated as a symbol of African identity. Shonibare prizes these printed fabrics as signifiers of cultural hybridity and our global interdependence. For the clothing of the figures in Earth Kids, Shonibare has chosen patterns that playfully nod to the elements to which their wearers give form. For instance, Air Kid (Boy) is clad in a fabric that bears a mechanical fan motif while the dress of Fire Kid (Girl) flickers with flames and Water Kid (Girl) is printed with faucets.

Water Kid (Girl) depicts a female child figure holding a Victorian water jug aloft as she pours out the last drops of water. A single resin water droplet condenses at the rim of the jug. The references throughout these works to the Victorian era connect to the time period when the British Empire was at its apotheosis. Fittingly, in this period of industrial expansion, when European nations were looking for new markets, cheap labor, and natural resources, Shonibare finds the seeds of the climate crisis we are experiencing today. African nations grew poorer as they were exploited by wealthy Western Empires. Water Kid (Girl) is a way to speak to the resulting urgent issue of global water scarcity.

Earth Kid (Boy) is a male child figure, carrying a fishing net full of disposable consumer plastics: single-use bags, takeout containers, beach toys, and empty water bottles. This work recalls Shonibare’s earlier Refugee Astronaut, 2015, a disheveled space traveler toting his worldly possessions on his back—pots, pans, butterfly net and family photographs—as he searches for a habitable world. Straining under the weight of the detritus he has scavenged from our oceans and beaches, Earth Kid (Boy) represents the reality of developing countries and their fight to combat plastic pollution from the developed world. The work is an embodiment of what needs to change about our current habits of consumption. Yet, as Shonibare notes, “He is a symbol of action and agency. We do have agency, and we can change some of this.”

Yinka Shonibare CBE (RA) (born 1962 in London, UK) is a member of the ‘Young British Artists’ generation who first came to prominence in the late 1990s. His works have been featured in Documenta10 (2002) and the 52nd and 57th Venice Biennales (2007 and 2017.) Shonibare’s major public commission Wind Sculpture (SG) V is currently installed in the Rose Kennedy Greenway in Boston. Since 2013, Shonibare has created monumental public sculptures that freeze the elemental power of the wind in a moment of time. These abstract sculptures take the form of billowing fabric; their sail-like form is a “metaphor for the natural movement of people: migration.”