“You have to start from somewhere, and you start from the subject which gradually, if the thing works at all, withers away and leaves this residue which we call reality.”
—Francis Bacon, Interview with David Sylvester, 1982–1984

Petzel Gallery presents Adverb High Command, Xie Nanxing’s first exhibition with the gallery and his first solo show in New York. Nanxing presents two recent bodies of work—The Dwarfs’ Refrain (2019–2020) and Shadows of Painting (2020–2021)—introducing an expansive and demanding practice that has constantly evolved since his work was first presented internationally at the 48th Venice Biennale in 1999. 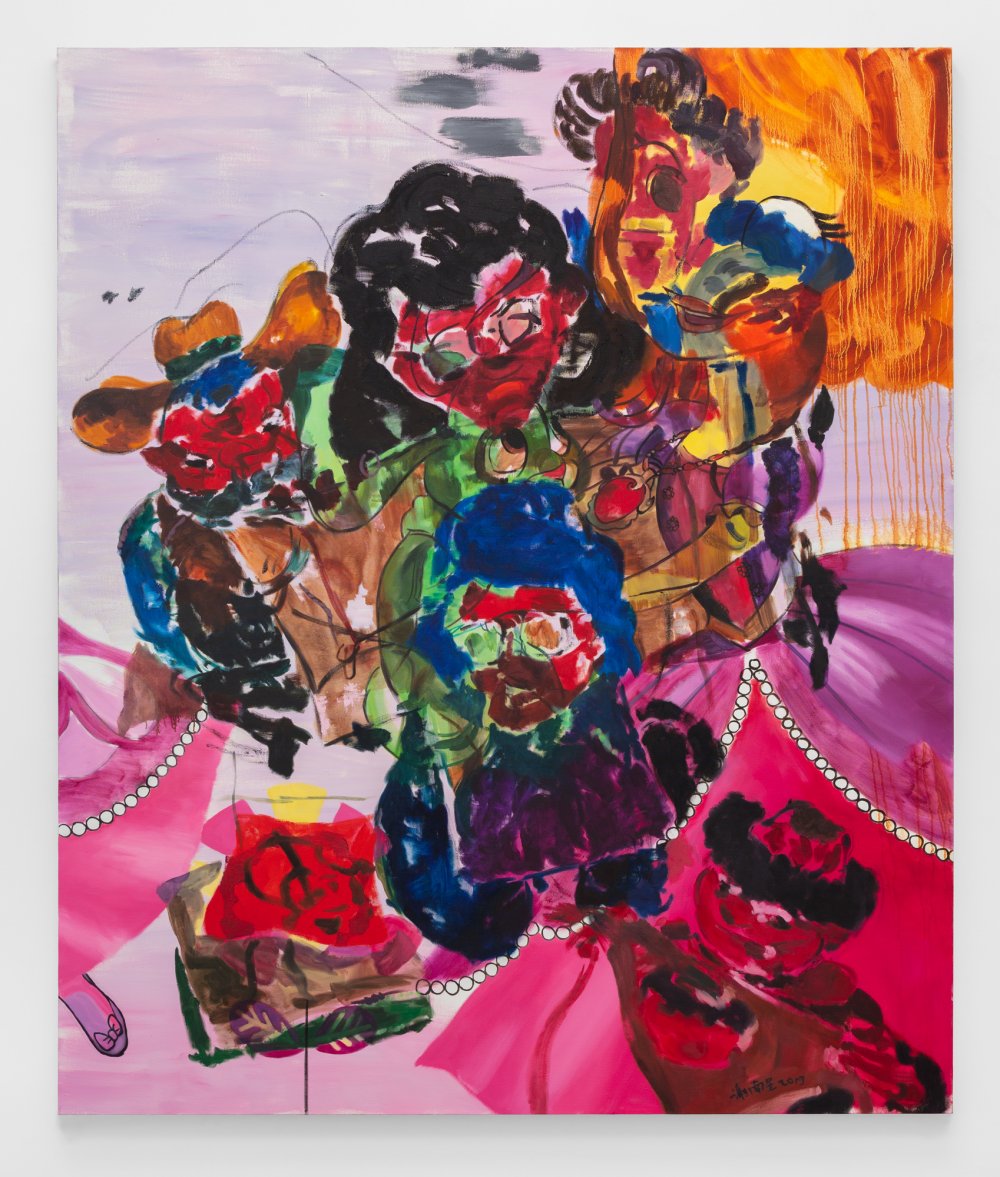 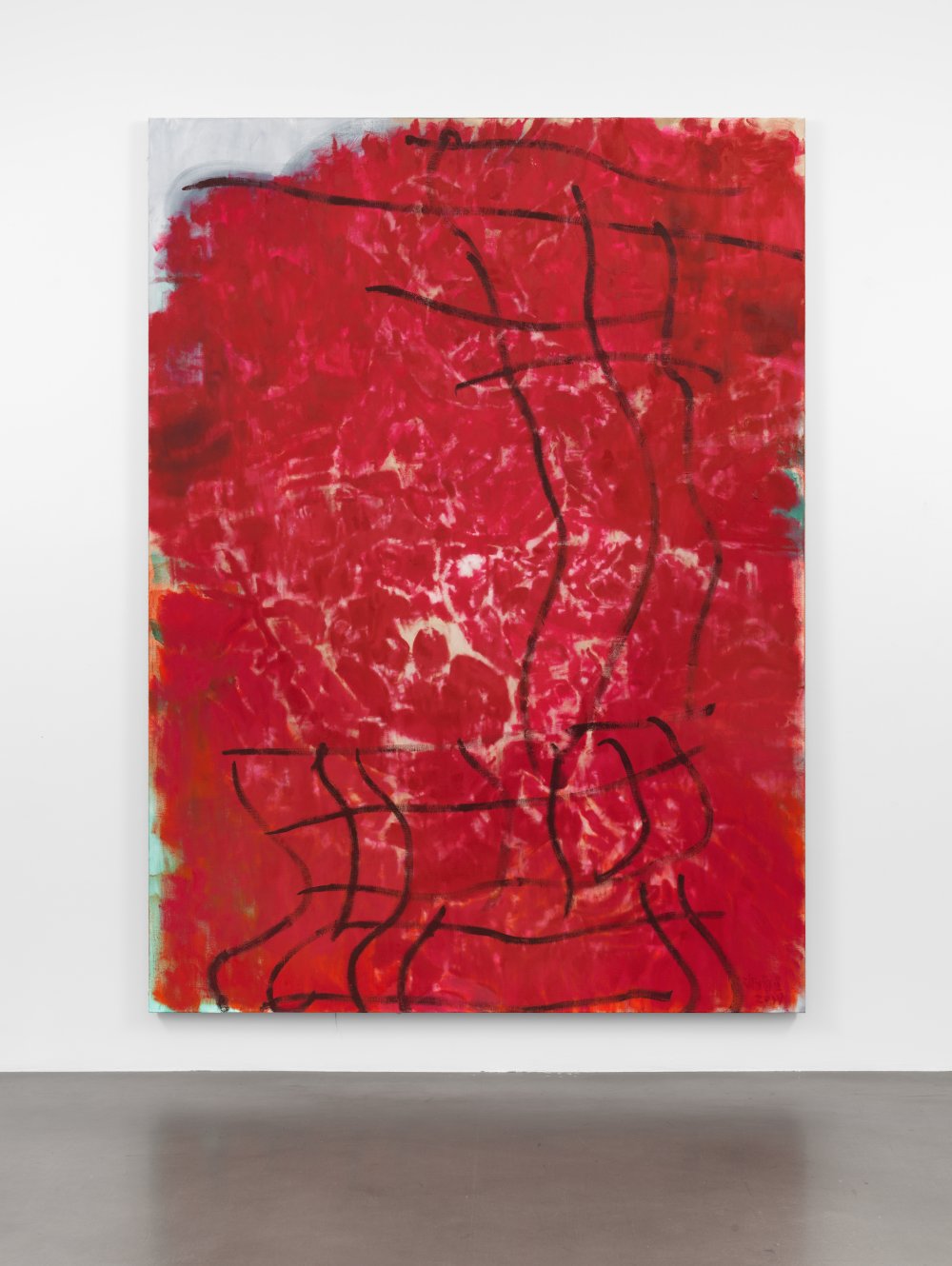 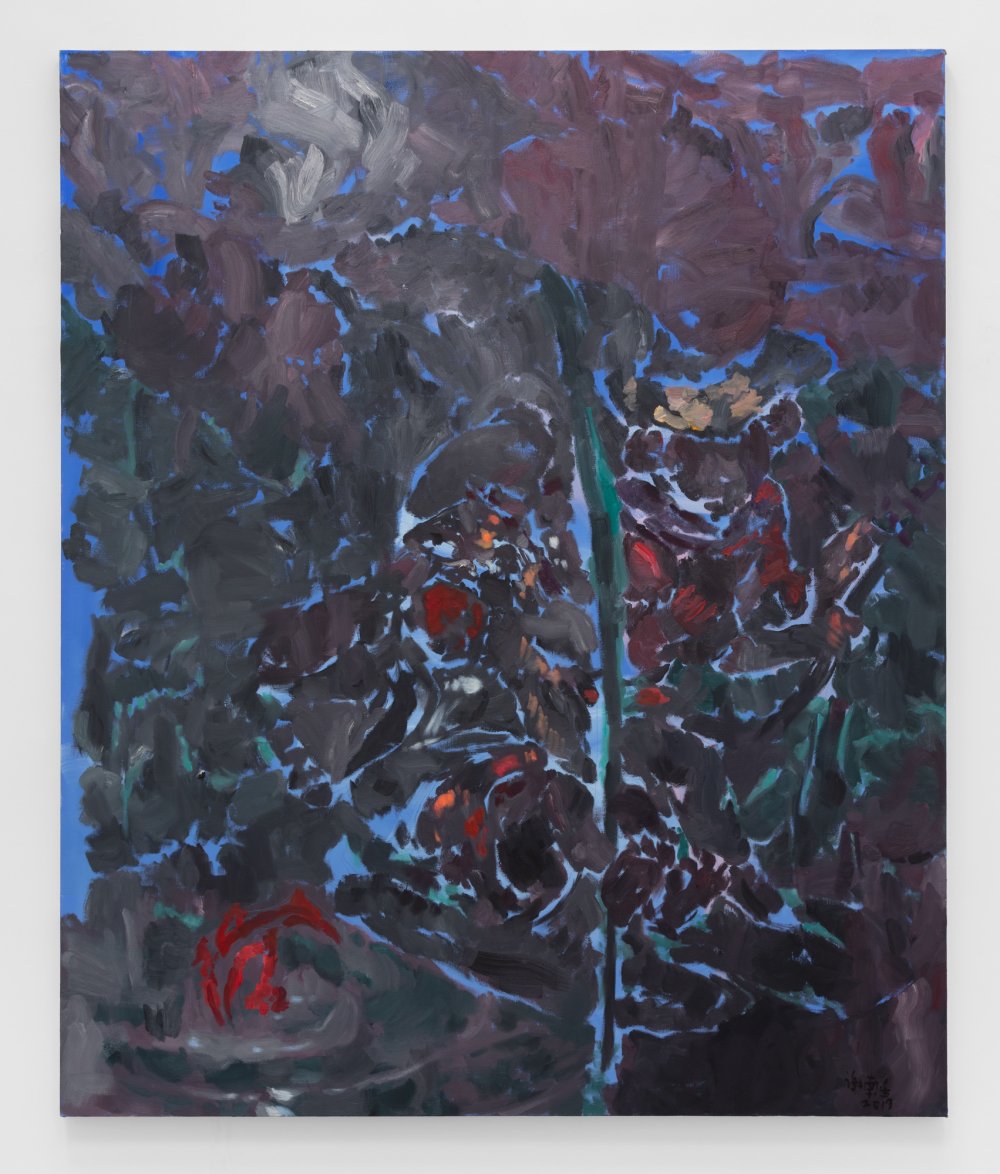 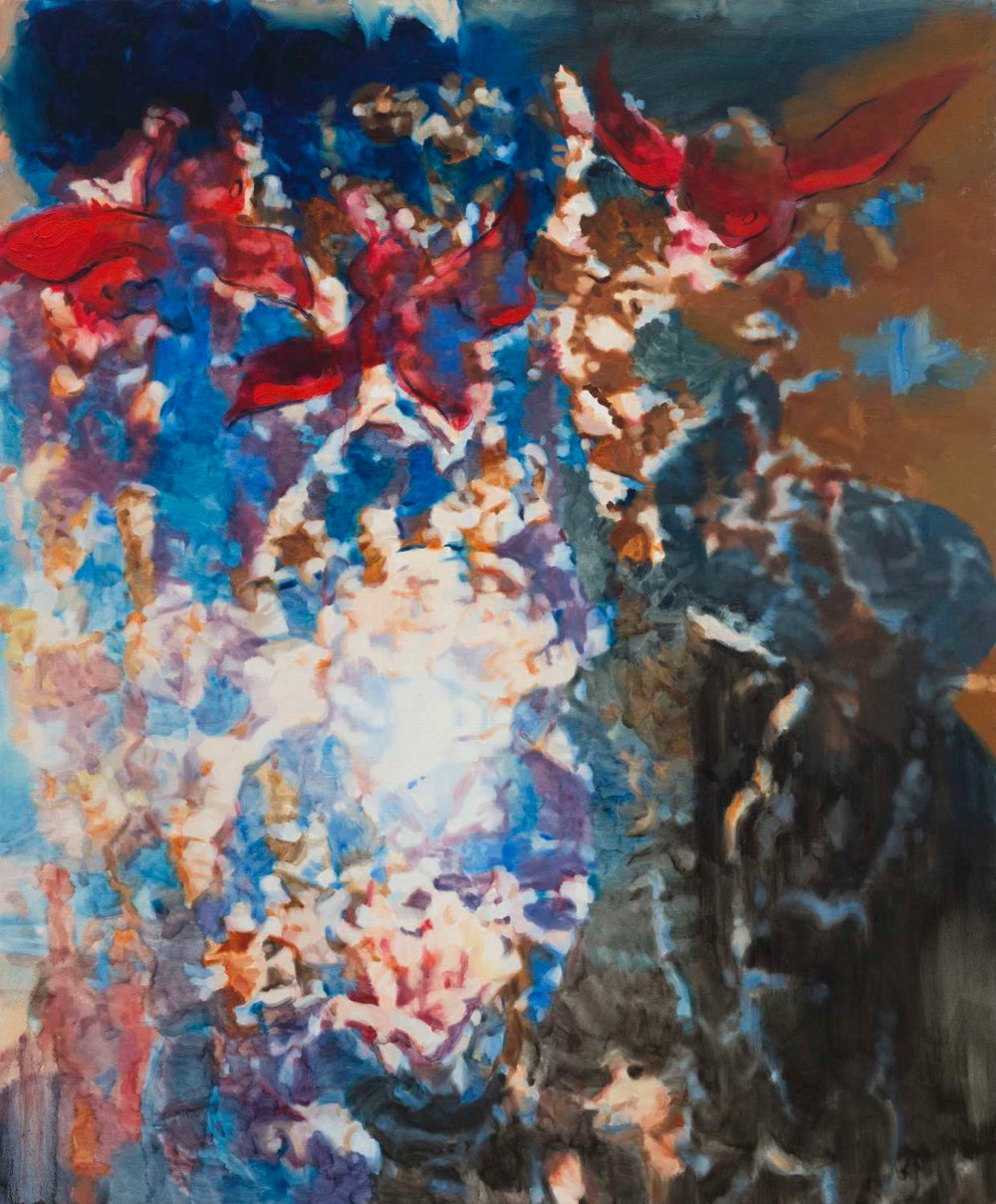 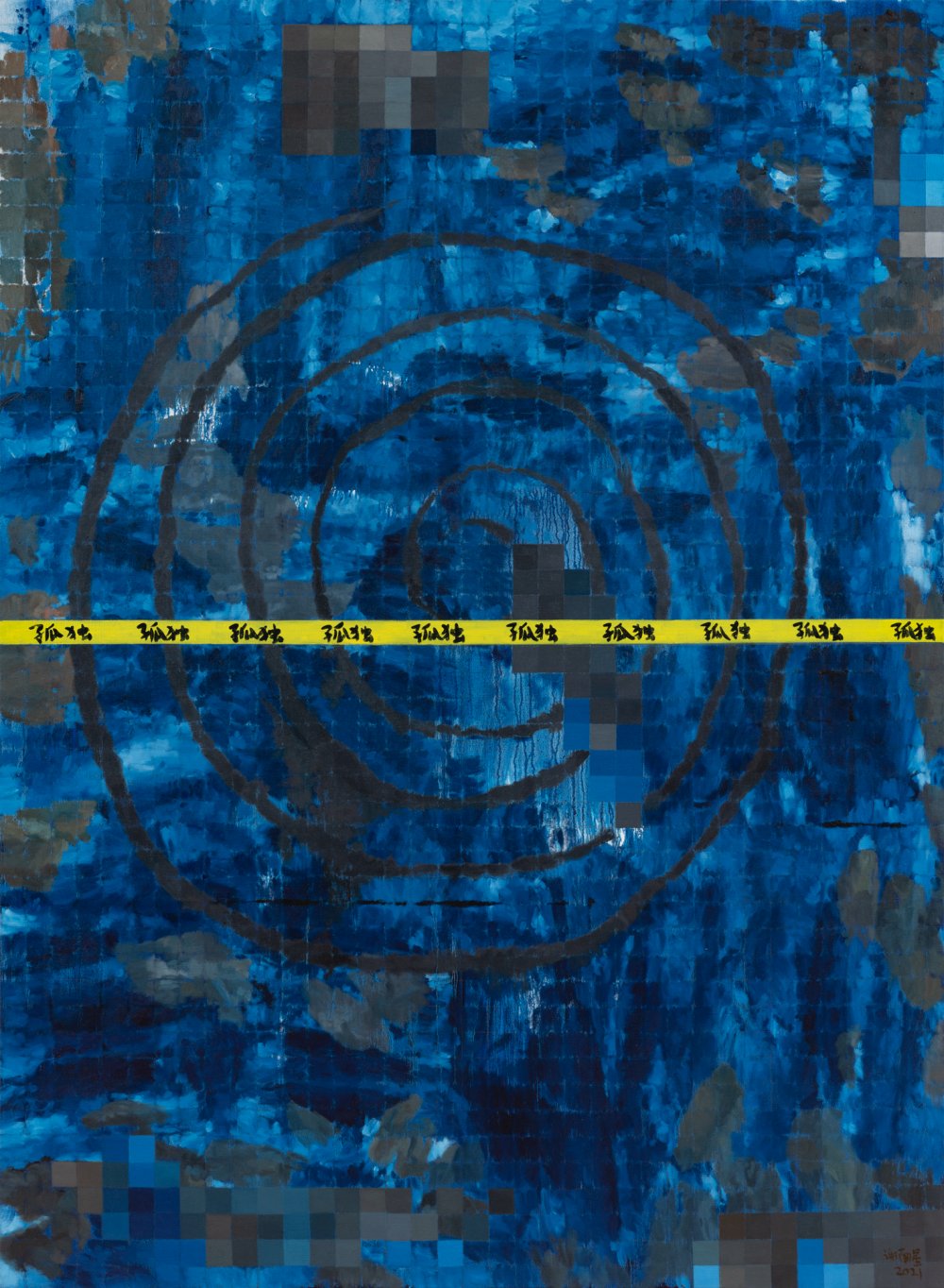 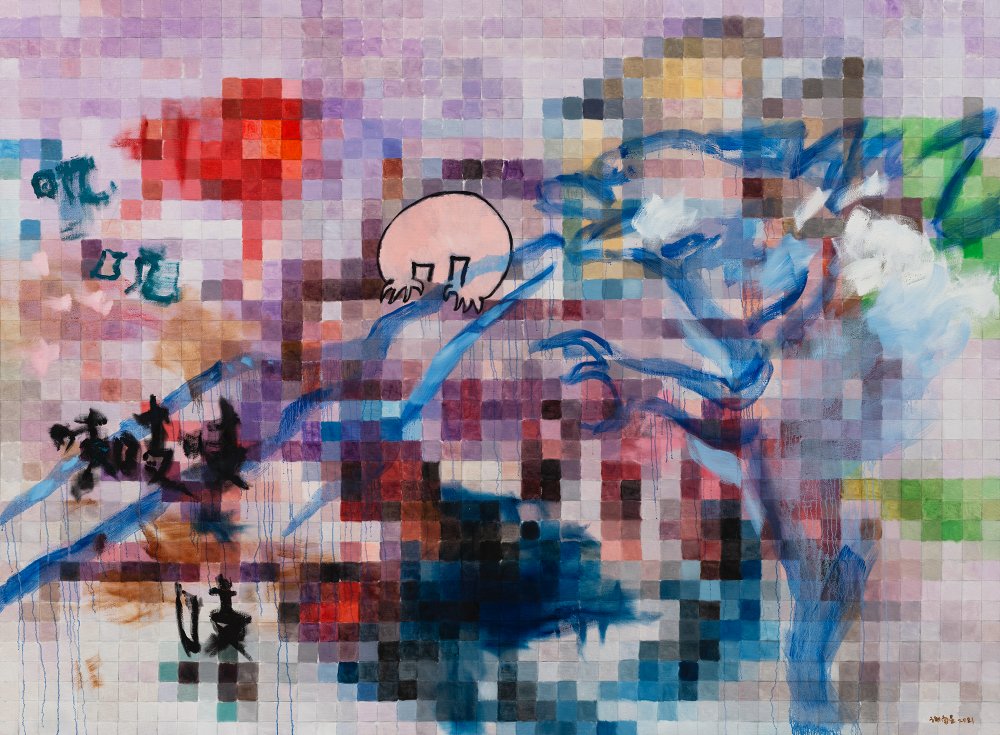 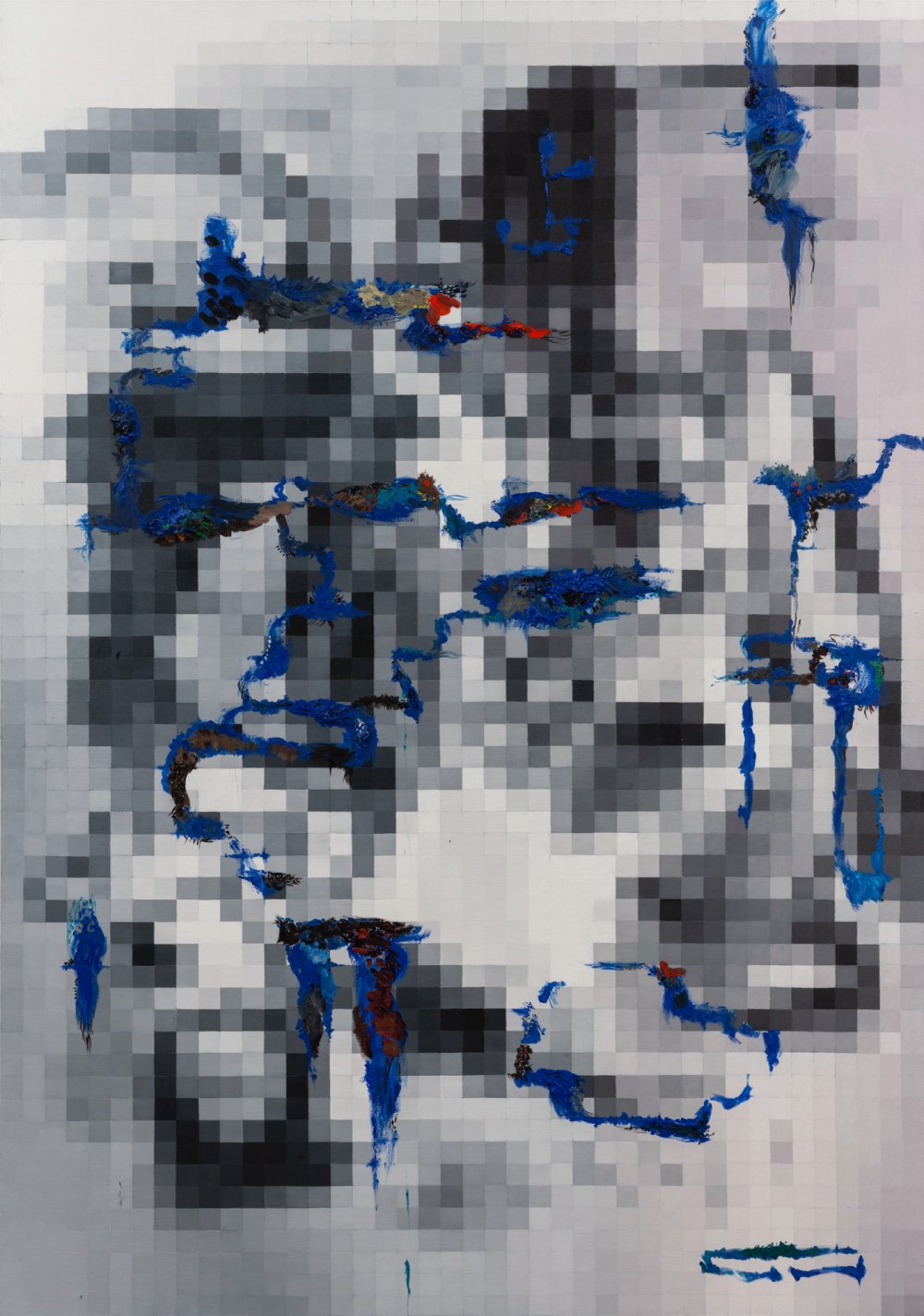 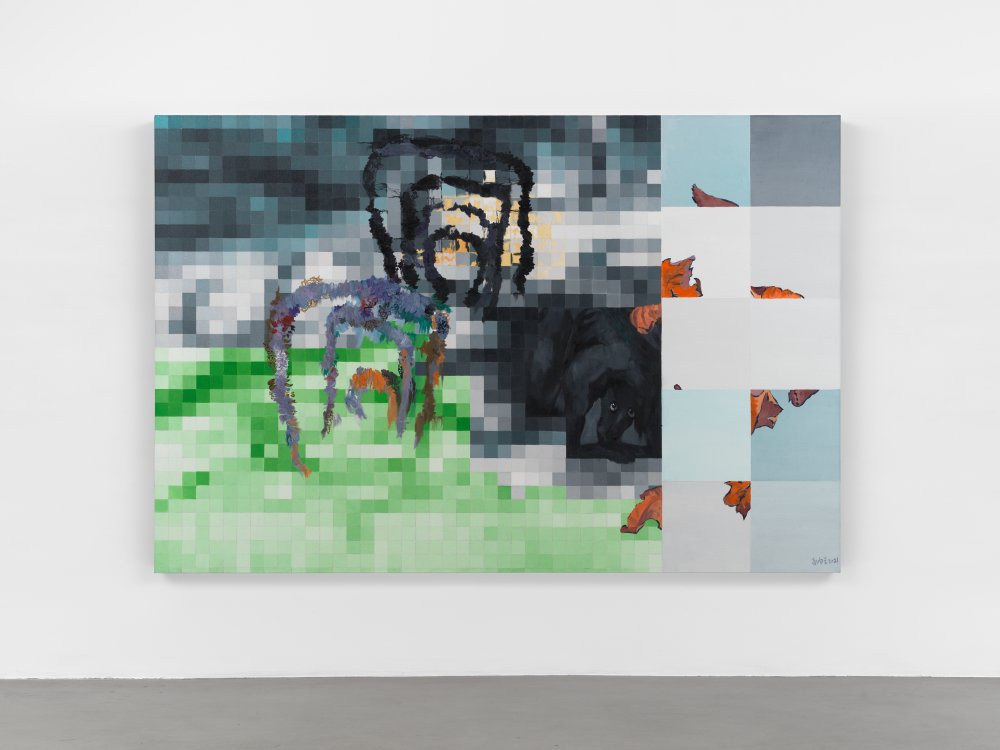 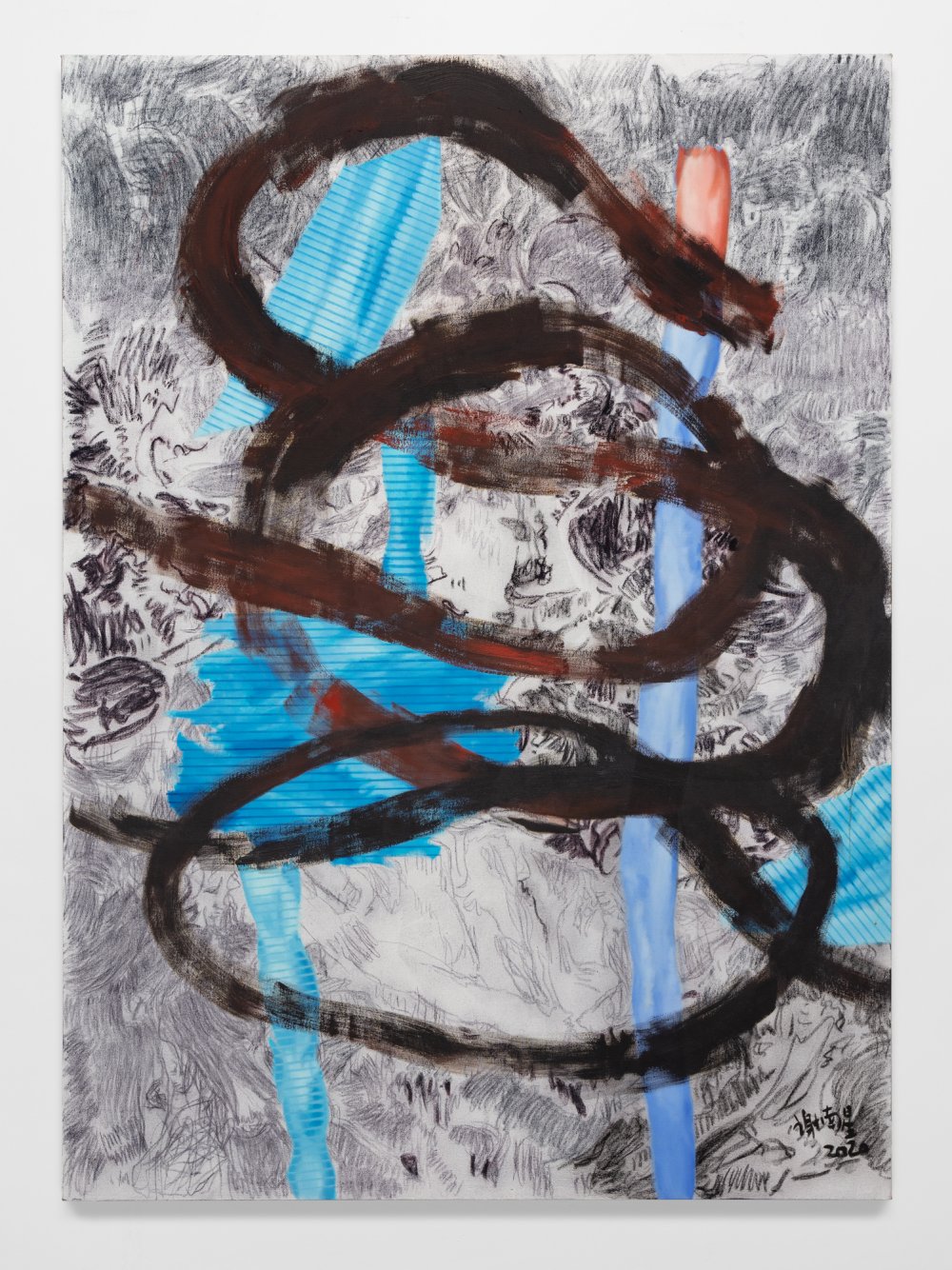 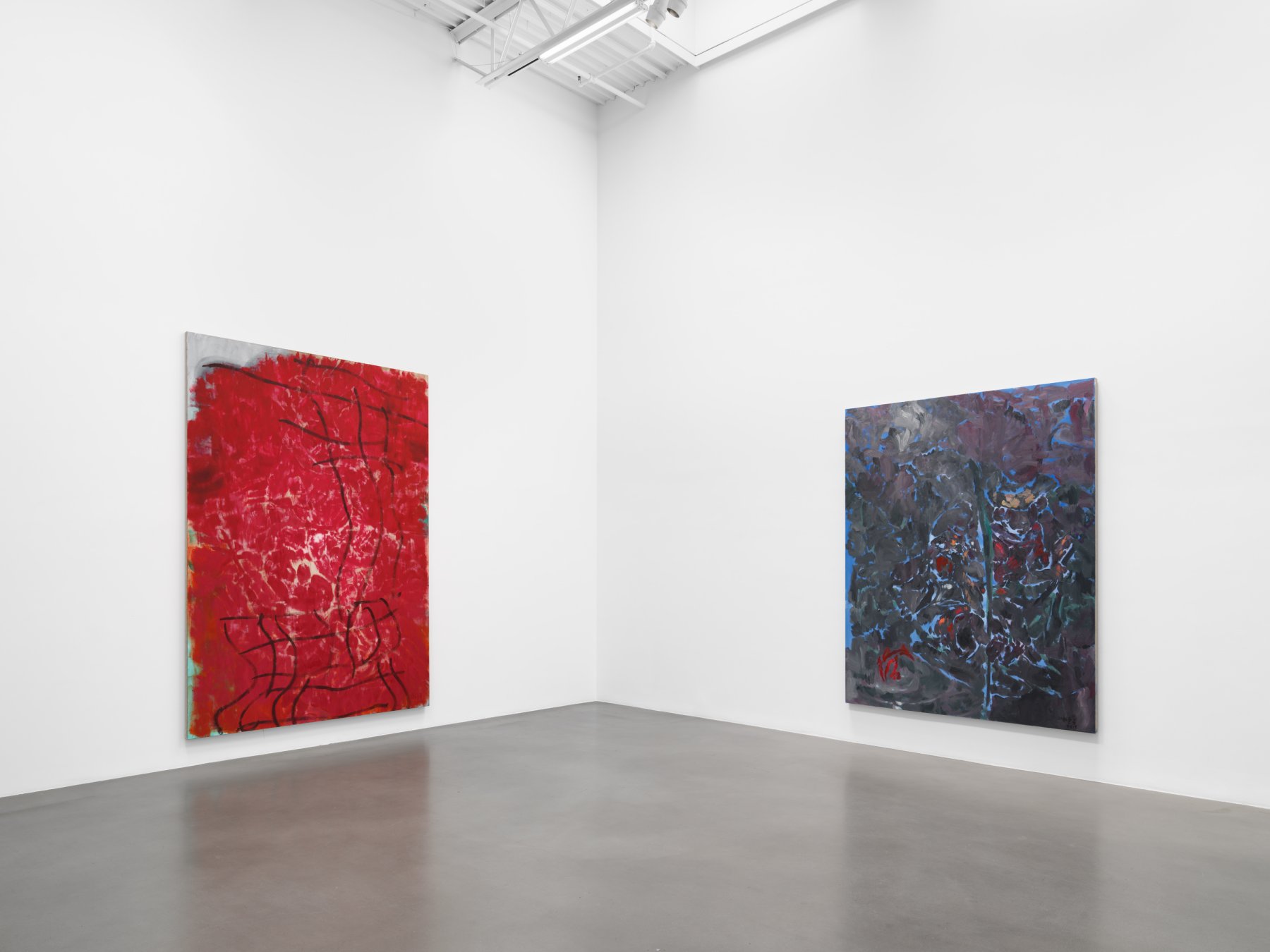 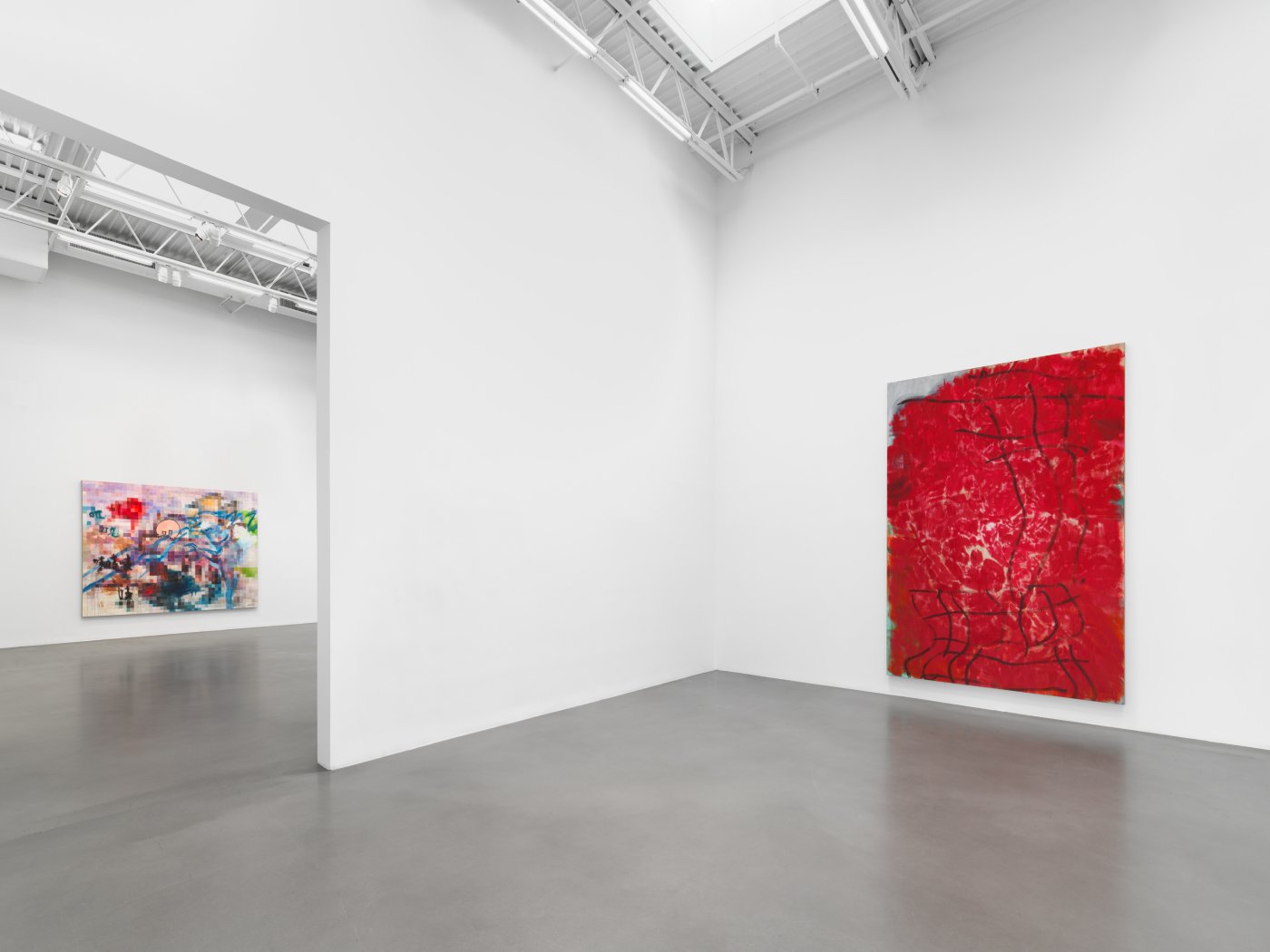 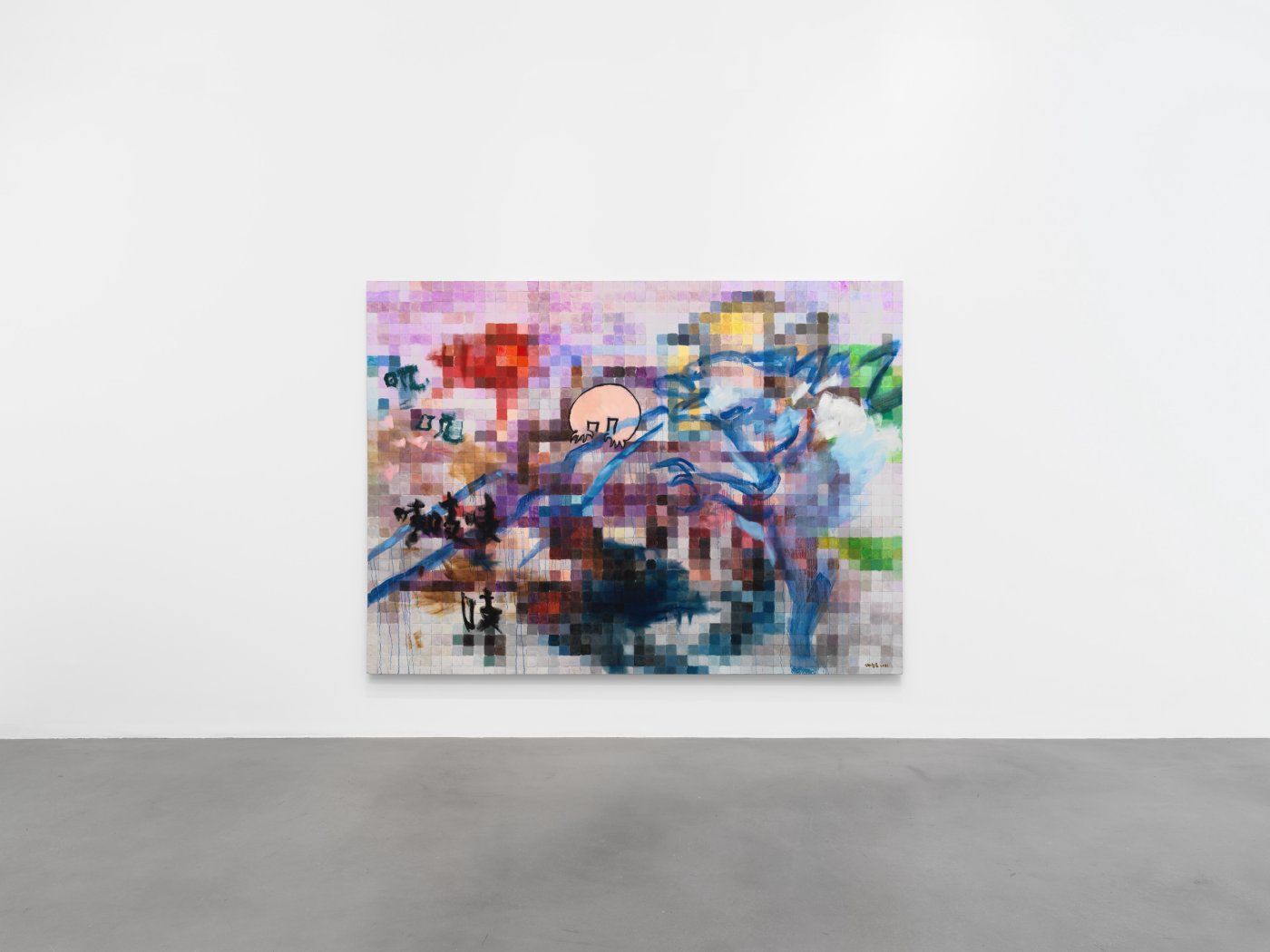 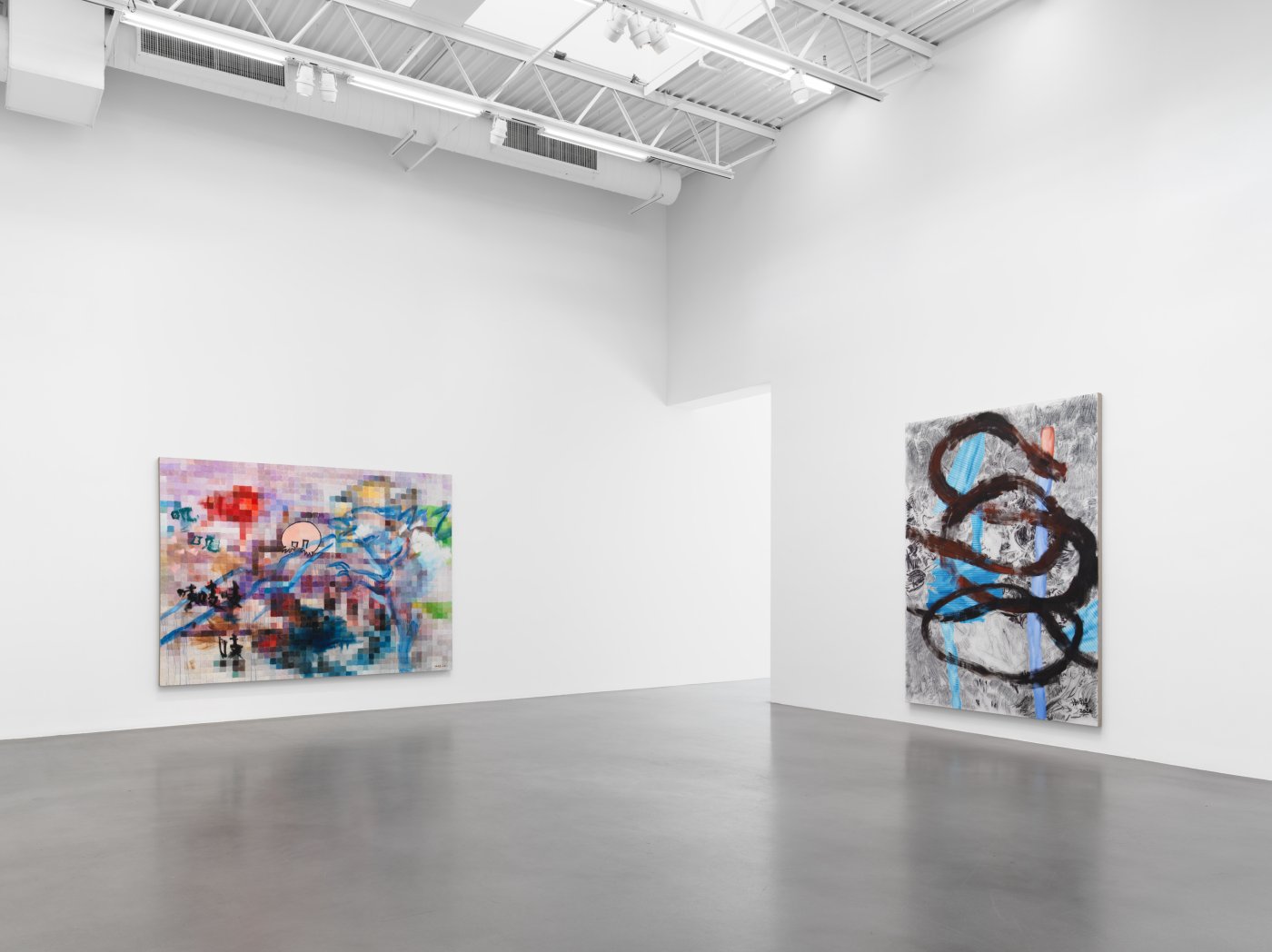 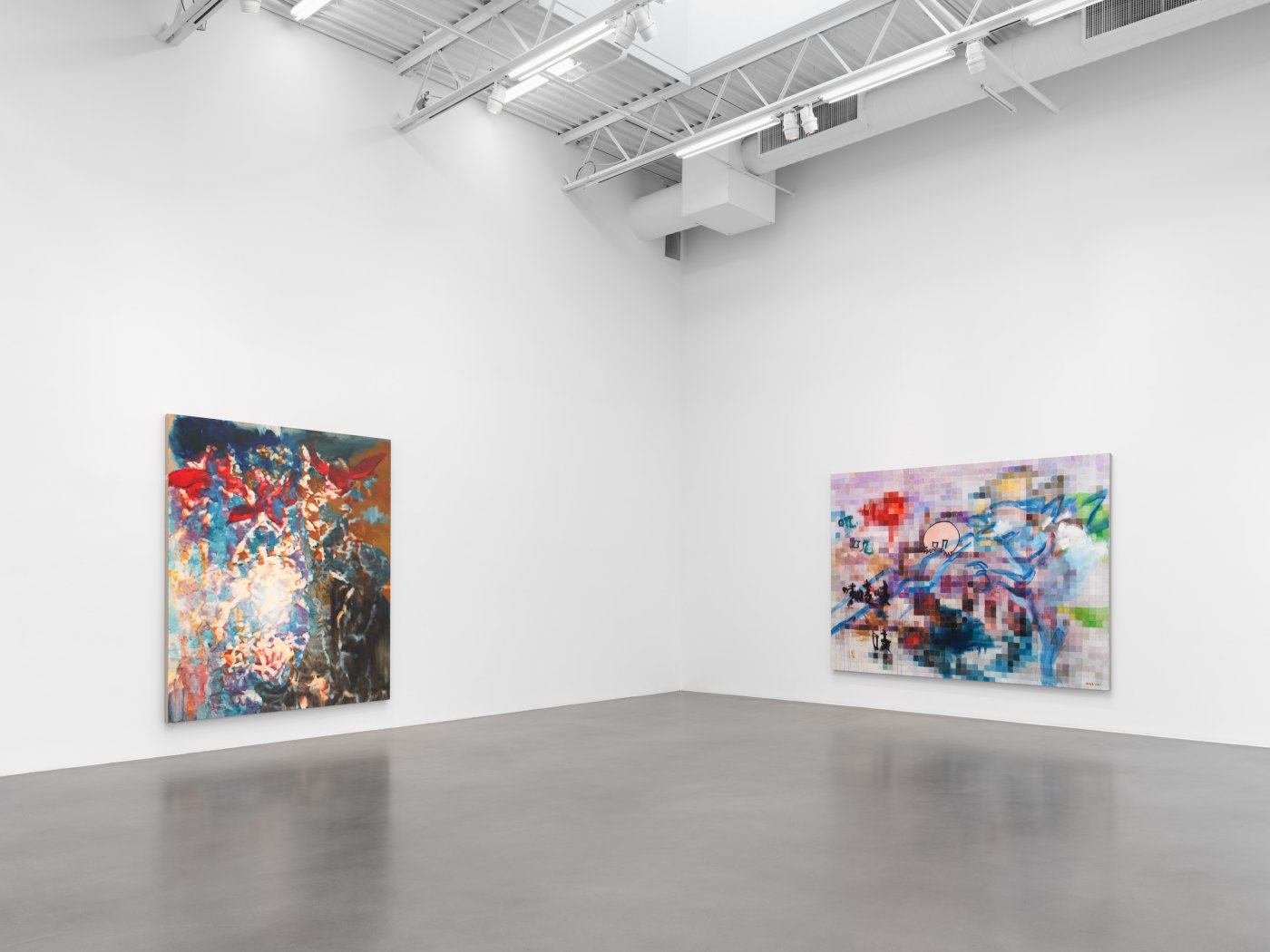 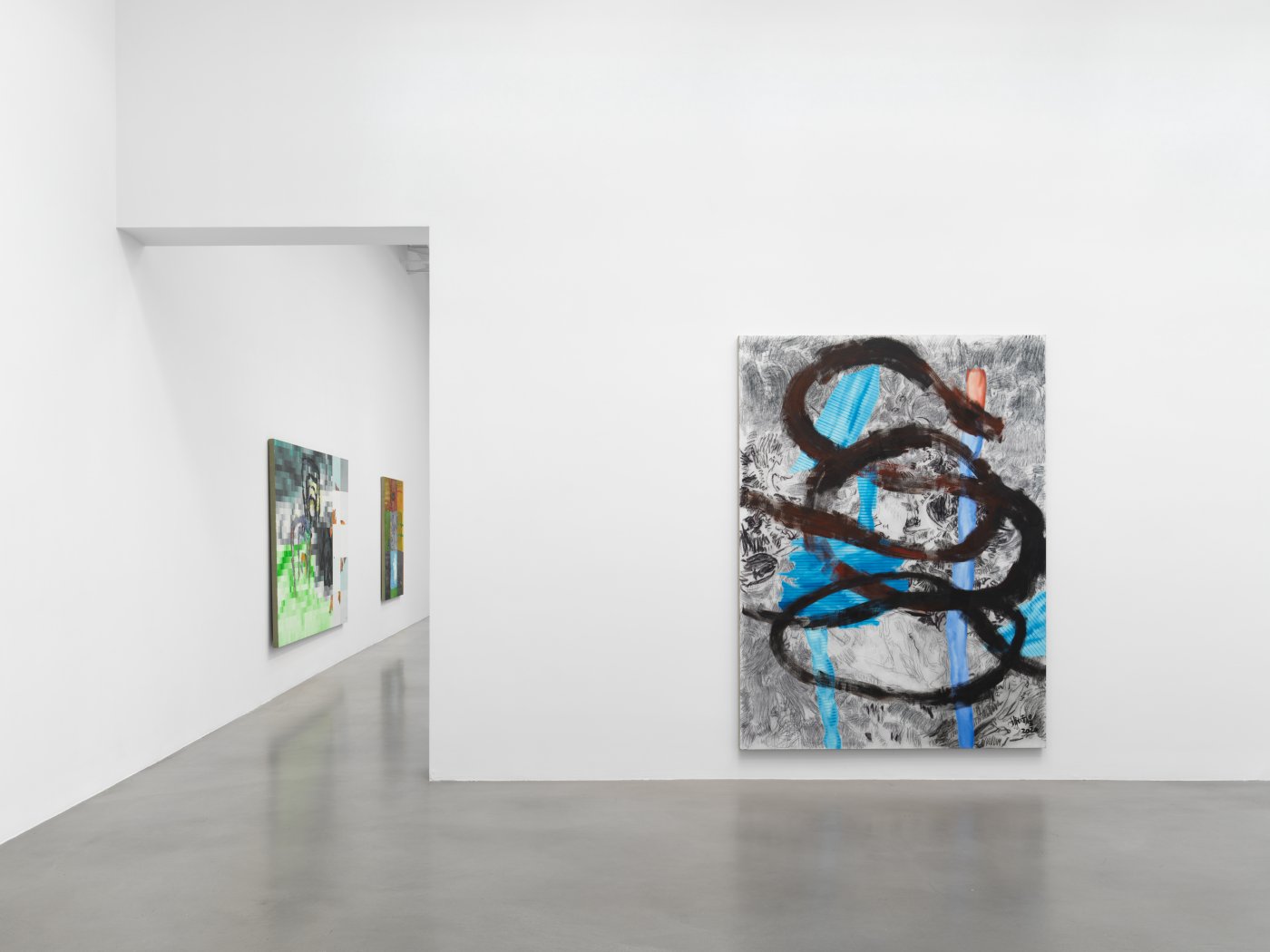 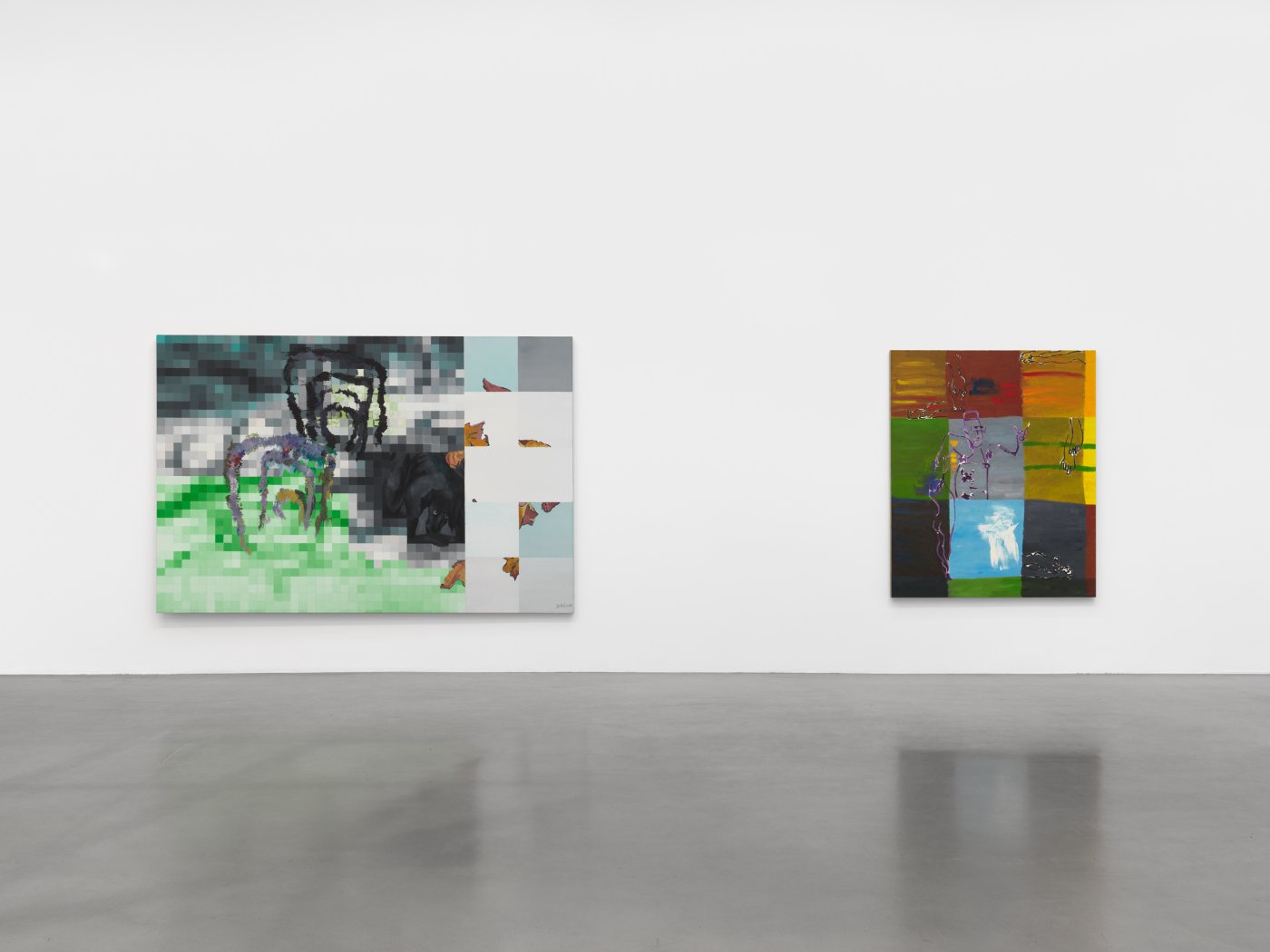 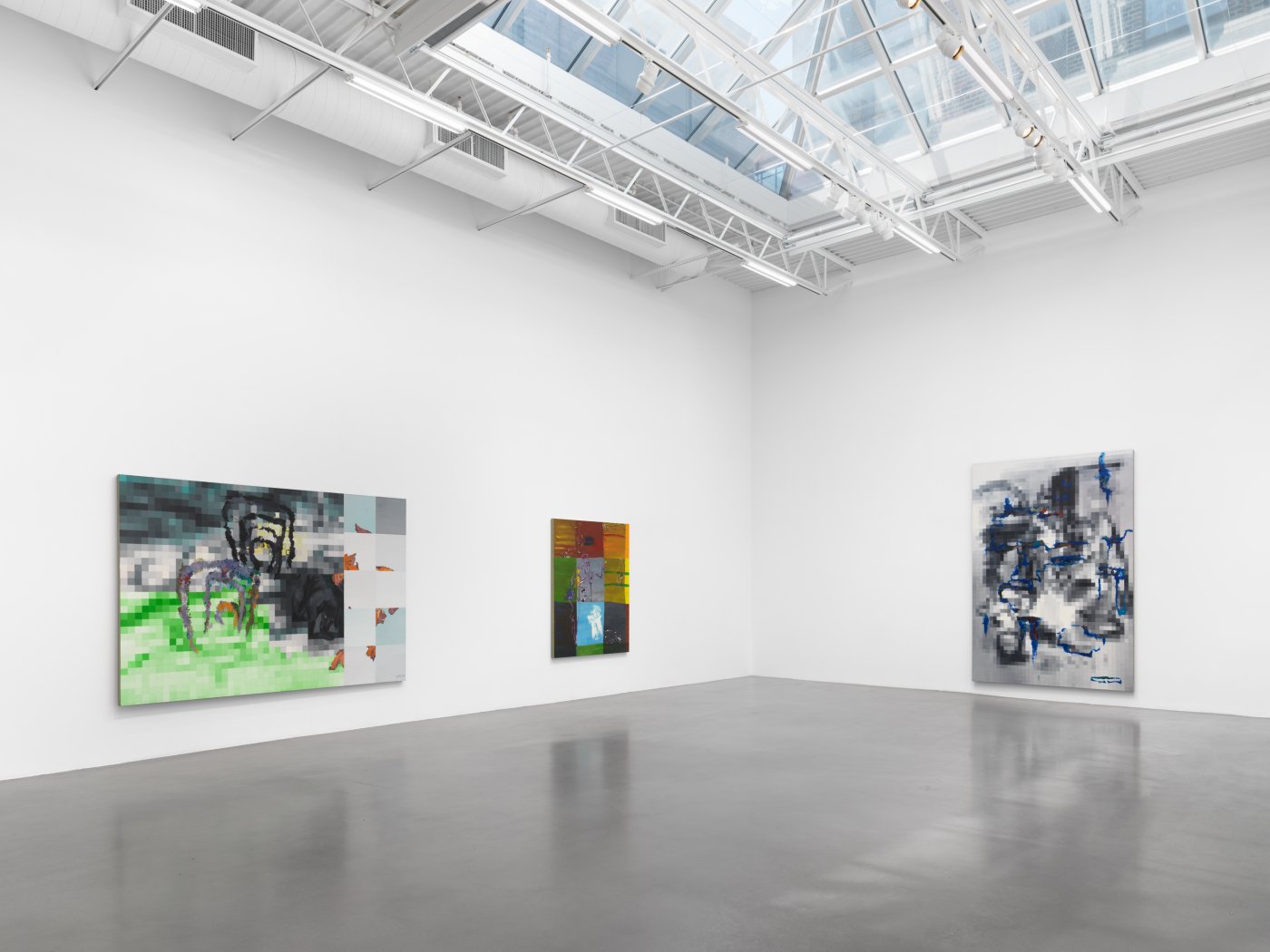 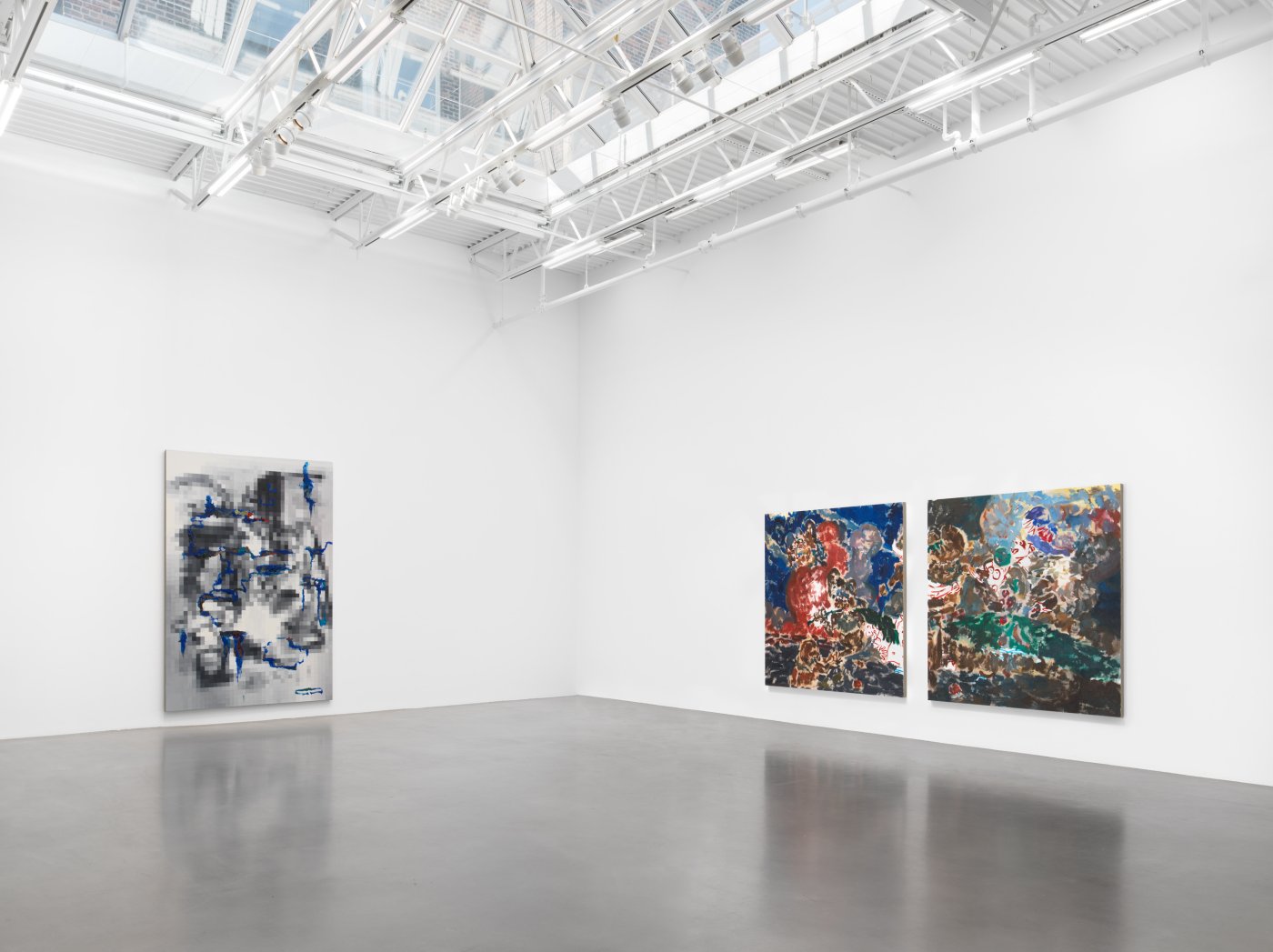 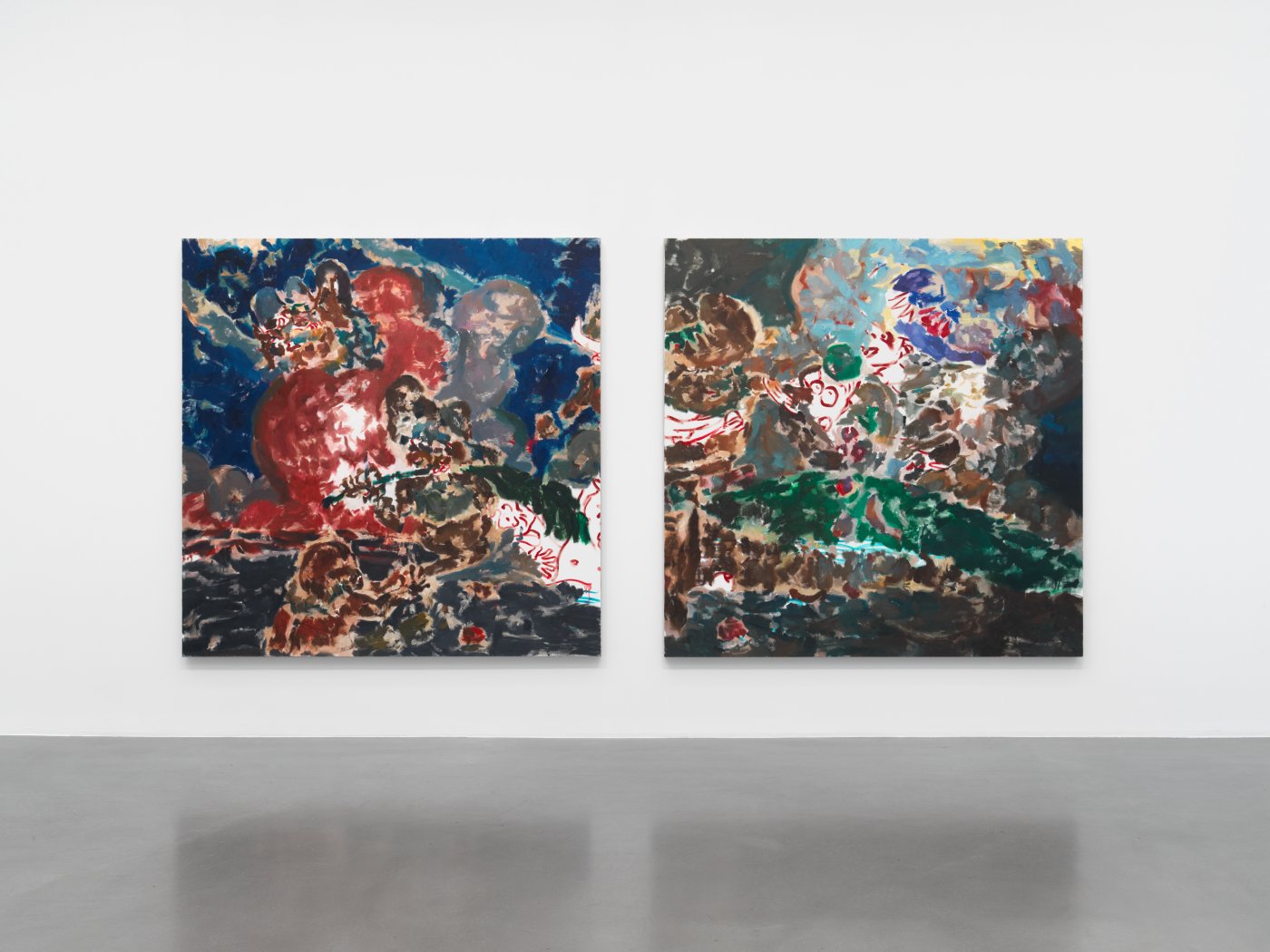 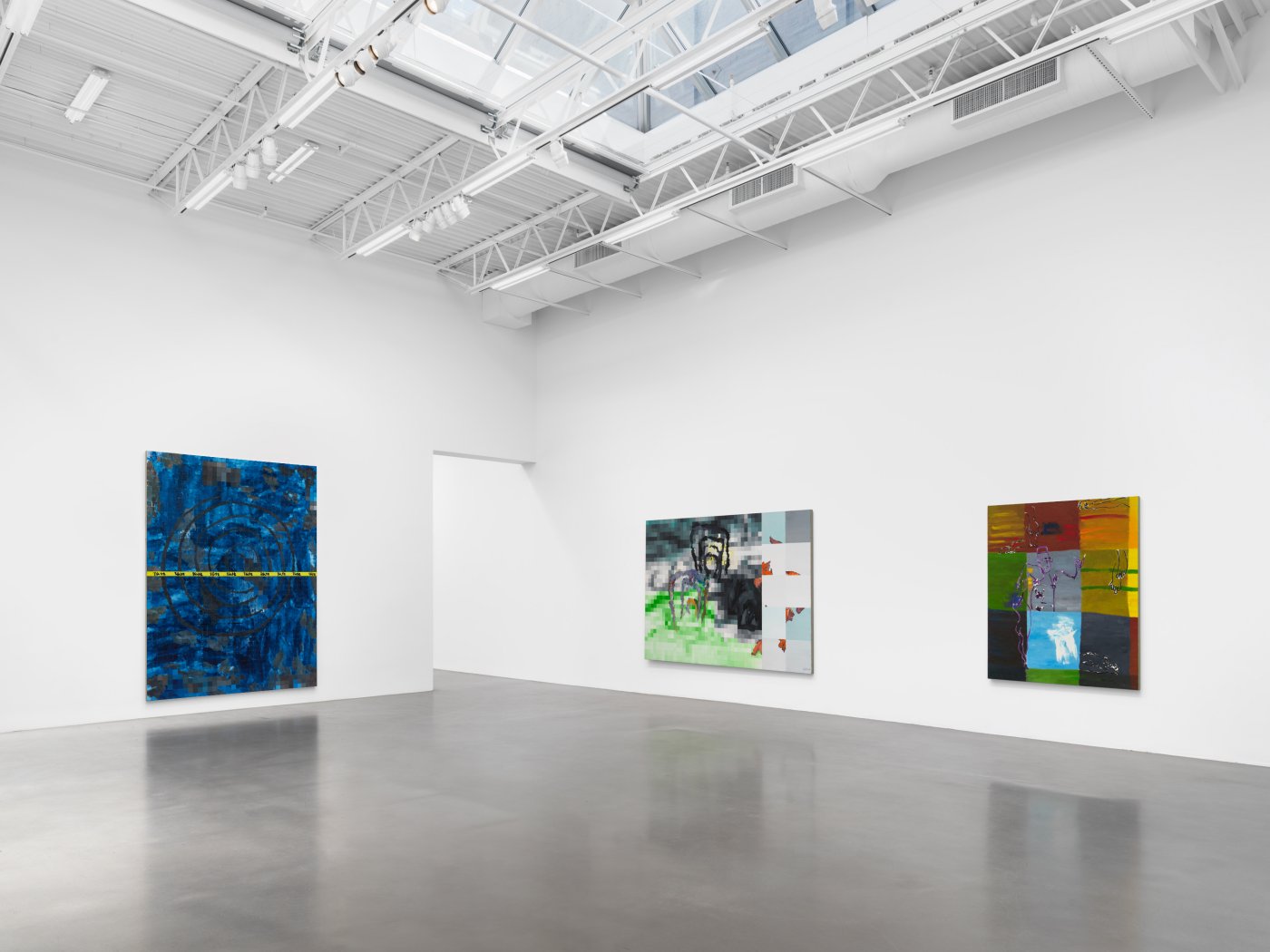 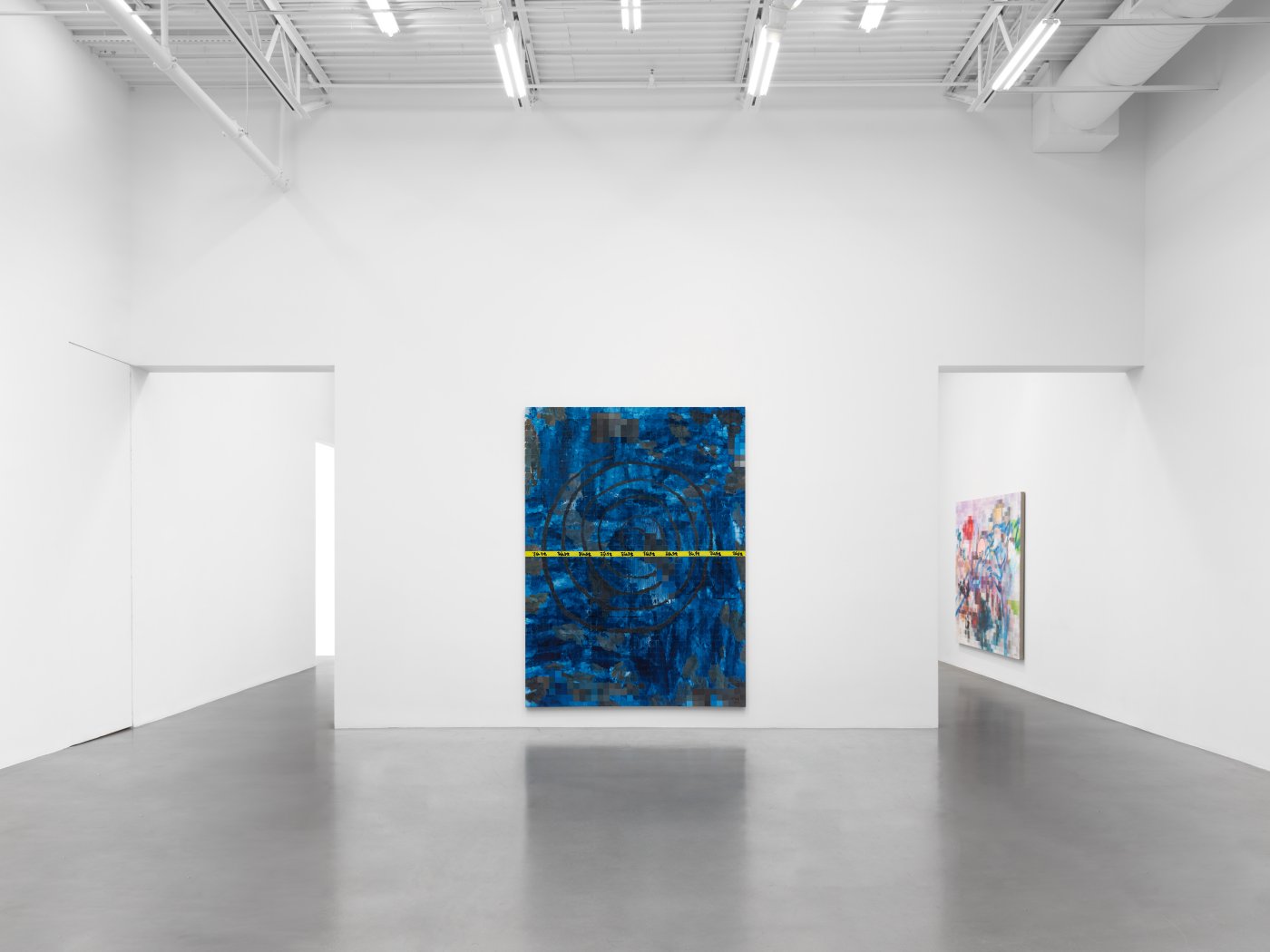 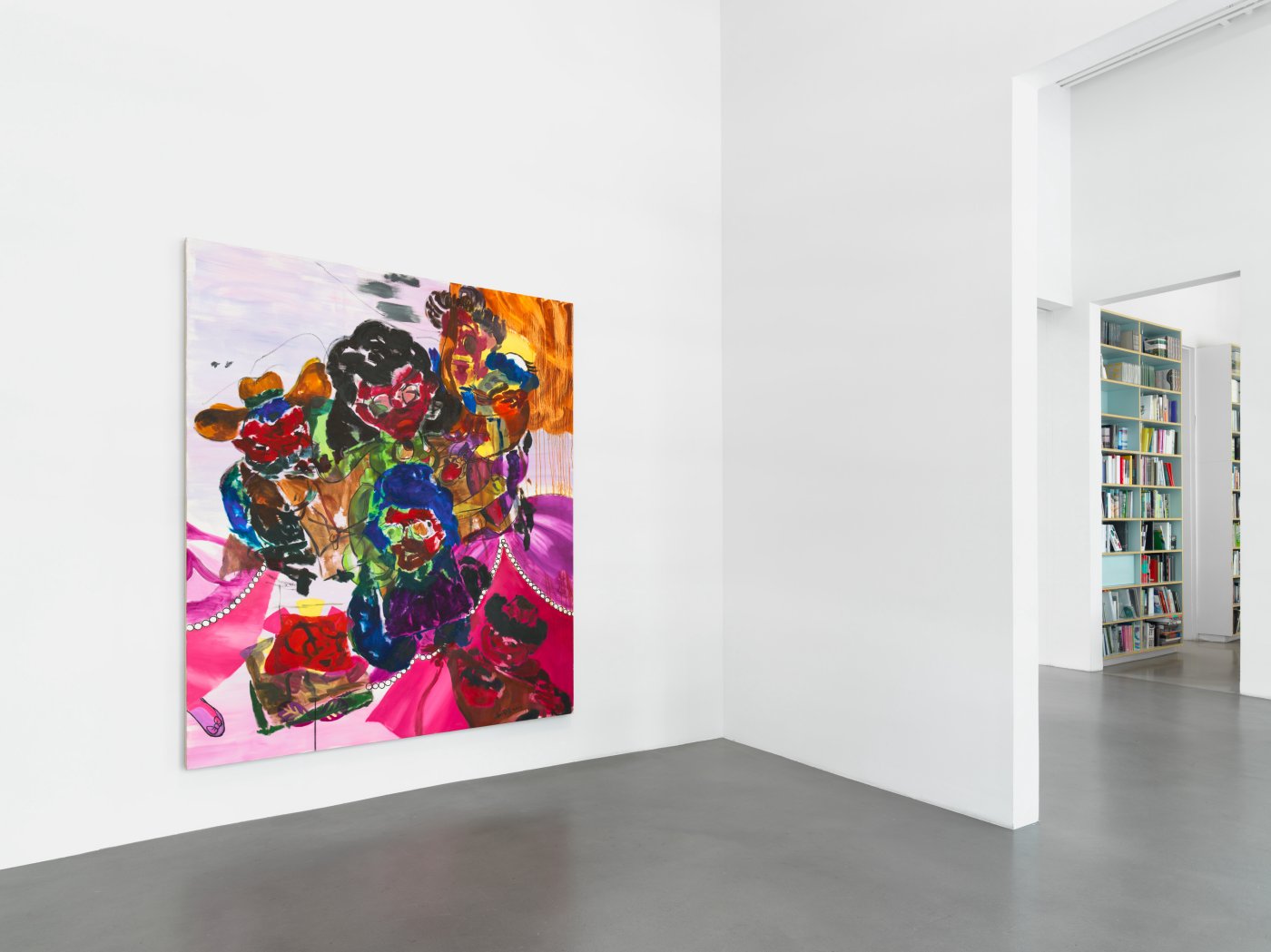 Xie Nanxing has written recently of his admiration for Georges Didi-Huberman’s What we see looks back at us (Ce que nous voyons, ce qui nous regarde). The book opens with a discussion of “the ineluctable scission of the act of seeing (l’inéluctable scission du voir),” drawing on a famous passage from James Joyce’s Ulysses. Ruth Noack, who included Nanxing’s work when curating documenta 12 in 2007, used a similar phrase to describe his paintings, suggesting that they provoked a “crisis of spectatorship.” This might be the only serious initial response, for Nanxing’s paintings are full of frictions and contradictions that the viewer must navigate—between figuration and abstraction, between painterliness and conceptual de-materialization, between ironic detachment and existential longing.

“The target,” Nanxing insists, “is figurative painting,” but this is obscured by the means employed. In The Dwarfs’ Refrain No. 1, Nanxing uses a process that has been a part of his practice since the mid-2000s: the painting, built up carefully with layers of thinned-out oil paint, departs from a photograph of a video of a heavily backlit oil sketch. In this instance, that delicate, multi-layered surface is disrupted by black lines, almost abstract or even gestural in appearance but also evocative of a net.

The original oil sketch is based on a small illustration by Nanxing’s father, one of several that Nanxing commissioned him to make in the cartoonish style of their childhood drawing lessons, which Nanxing hated. The “dwarfs” of these illustrations, clearly visible in The Dwarfs’ Refrain No. 2, now provide the source material for this new series of paintings, which sees them distorted in various ways: they are collaged onto garish children’s fabric, they are molded with clay, they morph into a traditional Chinese landscape.

Each of Xie Nanxing’s Shadows of Painting begins with a seemingly abstract grid. Looking at Shadows of Painting No. 5, in which the grid gives way to reveal a curiously humanoid dog, we realize that these are in fact all rooted in figurative source imagery. Nanxing calls this new approach in his practice “马赛郕.” A transliteration of the English mosaic, it can also mean pixelation. Is the image here being censored? Or should we look back further to the roots of the word, that it is the work of the muses?

The layers painted on top of these mosaics both guide and mislead the viewer. They range from clear if fragmented figures (a man holding a syringe, a creature breathing fire) to abstract lines of rich impasto that seem to have seeped between the cracks in the grid and, in several of the paintings, to Chinese words. At the bottom of Shadows of Painting No. 1 a rendering of quickly scribbled text reads: “插图术瘏关竻” (“the link between illustration and the history of art”), while in Shadows of Painting No. 6 we see the characters “叽” and “吱,” onomatopoeia of chirping and squeaking/creaking sounds. So far so opaque.

In Shadows of Painting No. 4 the grid, already overflowing, is interrupted by a stark yellow line with black writing on it. The painting becomes a crime scene (a theme in Nanxing’s practice that goes back to the 1999 Venice Biennale paintings), and this is the barrier forcing us to keep our distance. But the text across it reads “芚独芚独芚独”—“lonely lonely lonely.” Perhaps this could offer some enlightenment as to the images that have been pixelated (or perhaps not—it also works as a pun on the sound of bubbling water in Chinese). An earlier abandoned title for the series hinted at one key source that draws from Nanxing’s printmaking background—a reworking of Dürer’s Melancholia.

An attempt at interpretation leaves the viewer with more questions than answers. All the layers, the convoluted methods—is this virtuosic post-modern play, designed to hold us at the level of intellect? Or could this be Nanxing’s way of approaching something more fundamental, even something true?

Didi-Huberman returns to Joyce: “Shut your eyes and see.”