In honour of the International Day for the Elimination of Violence Against Women, Richard Saltoun presents Domestic, an installation by Wilma WOOLF documenting all the women that have been killed in the UK at the hands of male violence since 2013. This incredibly important work by Wilma WOOLF consists of eight individual plates, placed on a table, representing eight years of data. The woman’s name, relationship to her killer, and specifically designed icons by the artist, create a visual language to communicate the cause of death. 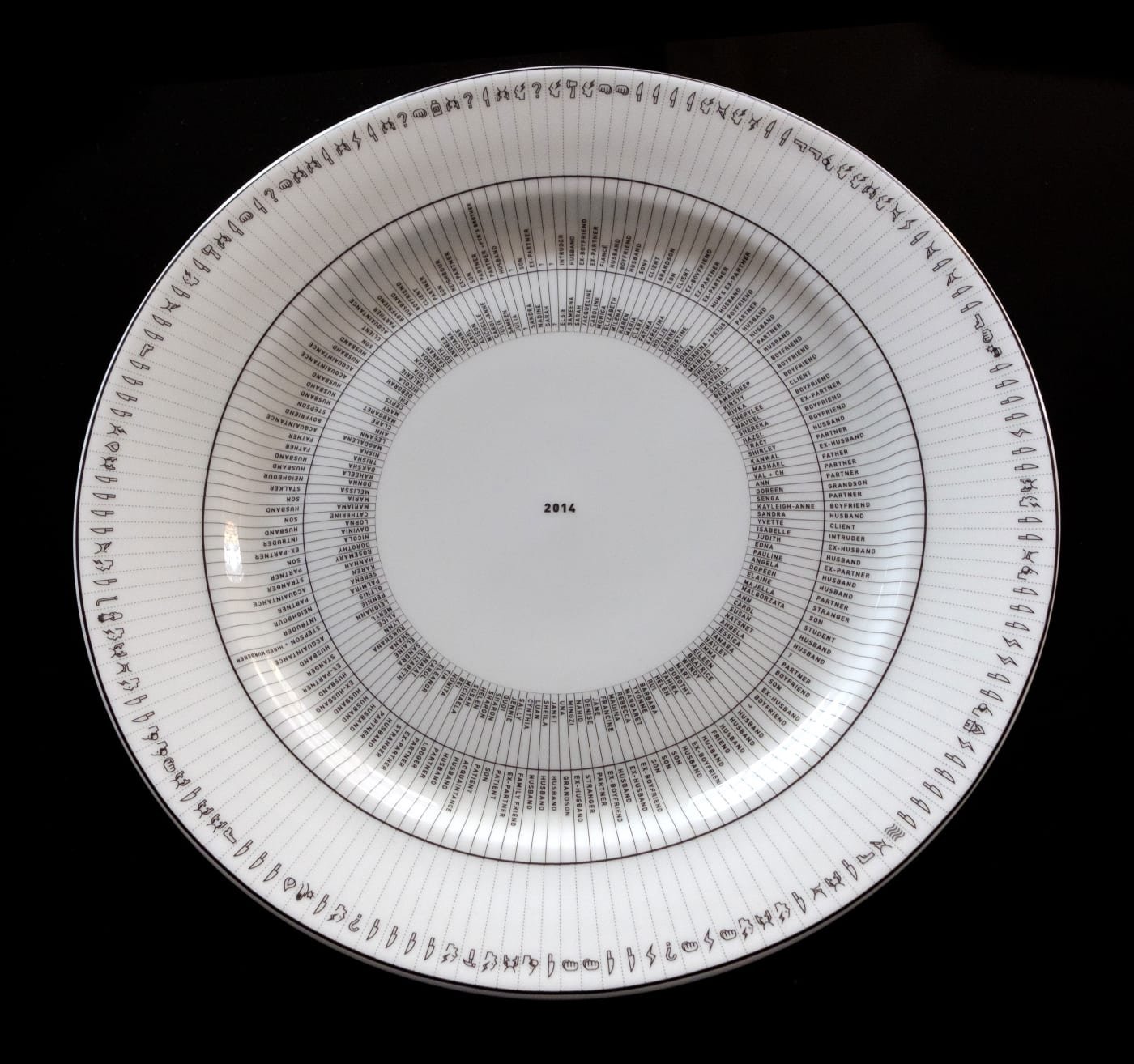 The UK government does not currently record this data. The artist’s research for this installation is based initially on data collected by the Counting Dead Women project, and then cross referenced with the femicide census, media reports on local news and radio stations, and national news reports.

Femi Otitoju
A lifelong feminist activist and campaigner, Femi served as Women’s Aid Co-Chair for six years and as chair of The Emma Humphreys Memorial Prize Group for eight years.
She is the Director of Challenge Training, the equality and diversity consultancy she founded in 1988. Through Challenge Femi provides training on tackling harassment and other forms of sexual misconduct to a broad range of organisations including the UK Parliament, government departments, police authorities, artistic bodies and charities.

Dickie James MBE
Dickie has worked in the Violence Against Women and Girls sector for nearly 30 years, beginning as a volunteer at Staffordshire Women’s Aid, where she now works as Chief Executive Officer for the charity.
As well as leading Staffordshire Women’s Aid which provides a range of services for victims of domestic and sexual violencei n Staffordshire, Dickie is a Board member of Women’s Aid Federation of England, the national membership body for domestic violence services in England which lobbies and campaigns on behalf of the sector and its service users, and sets standards of best practice through its accreditation system for members. She also sits on a number of committees, steering groups and boards, contributing her experience and knowledge of the Violence Against Women and Girls sector.
Dickie also works as a consultant for the Council of Europe, working with and making recommendations to member states on how to implement the Istanbul Convention. She has developed training and research, and has published a number of articles on violence against women. She has led in the participation in 4 transnational research projects, and has championed the particular problems and issues for older women and those women living in isolated rural communities who are suffering domestic violence.
In 2019, Dickie was awarded an MBE for services to victims of domestic violence.

Georgie Rowland
Detective Constable Georgie Rowland has worked for the Metropolitan Police for 20 years which has included three years in the Haringey Community Safety Unit dealing with victims of Domestic Abuse. She is attending in a personal capacity.

Wilma WOOLF is a Visual Artist working in London. In 2020 she completed a Masters in Fine Art at Central Saint Martins, graduating with a Distinction. In the last two years she has exhibited her work at The Tate Modern, Lethaby Gallery and the Apairy Gallery.

Woolf’s core concern is the extrapolation of political injustices told through data, collected testimonials and the communication of this through artistic means. Utilising a successful career as a policy professional working in similar fields, her work manifests information in physical form.

Integral to the meaning of her work is the making process. Her works are often memorialistic in nature and are both labour and research intensive. Woolf’s work is noted for being repetitive, organised and often comprising of grids or grid like structures. It is multi-disciplinary in its approach, incorporating installations, sculptural and 2D work, through diverse materials such as concrete, photography, glass, light and ceramics.