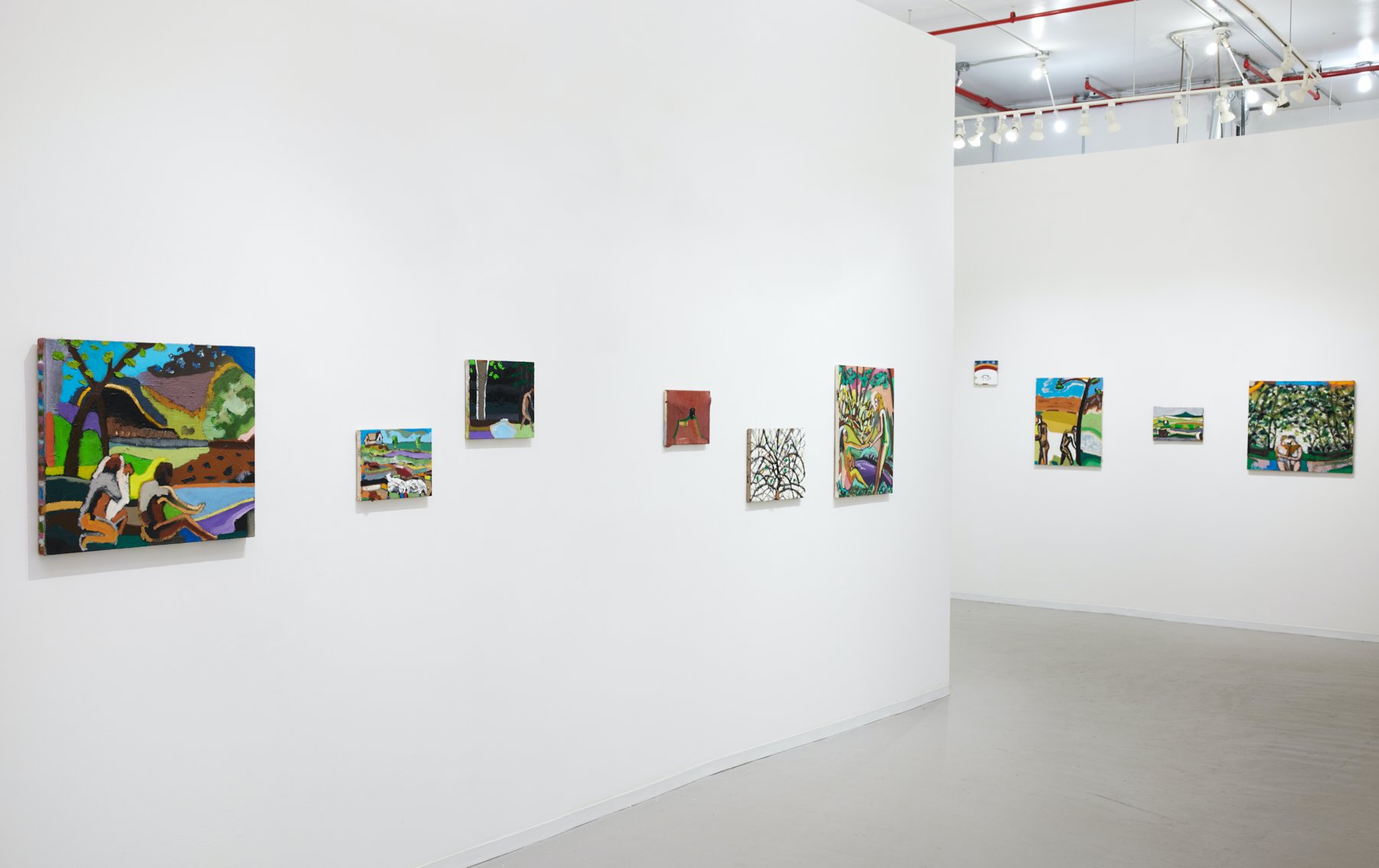 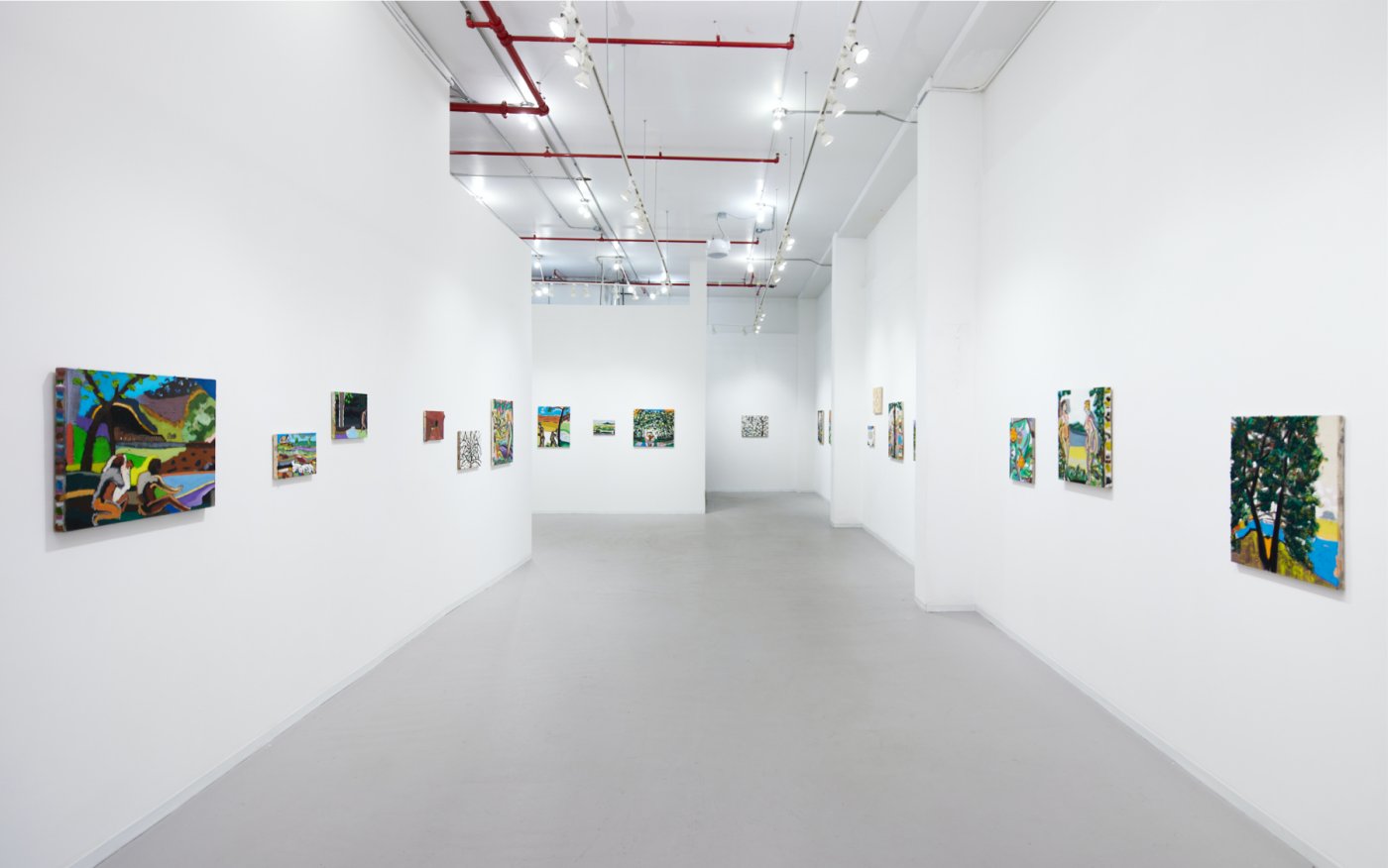 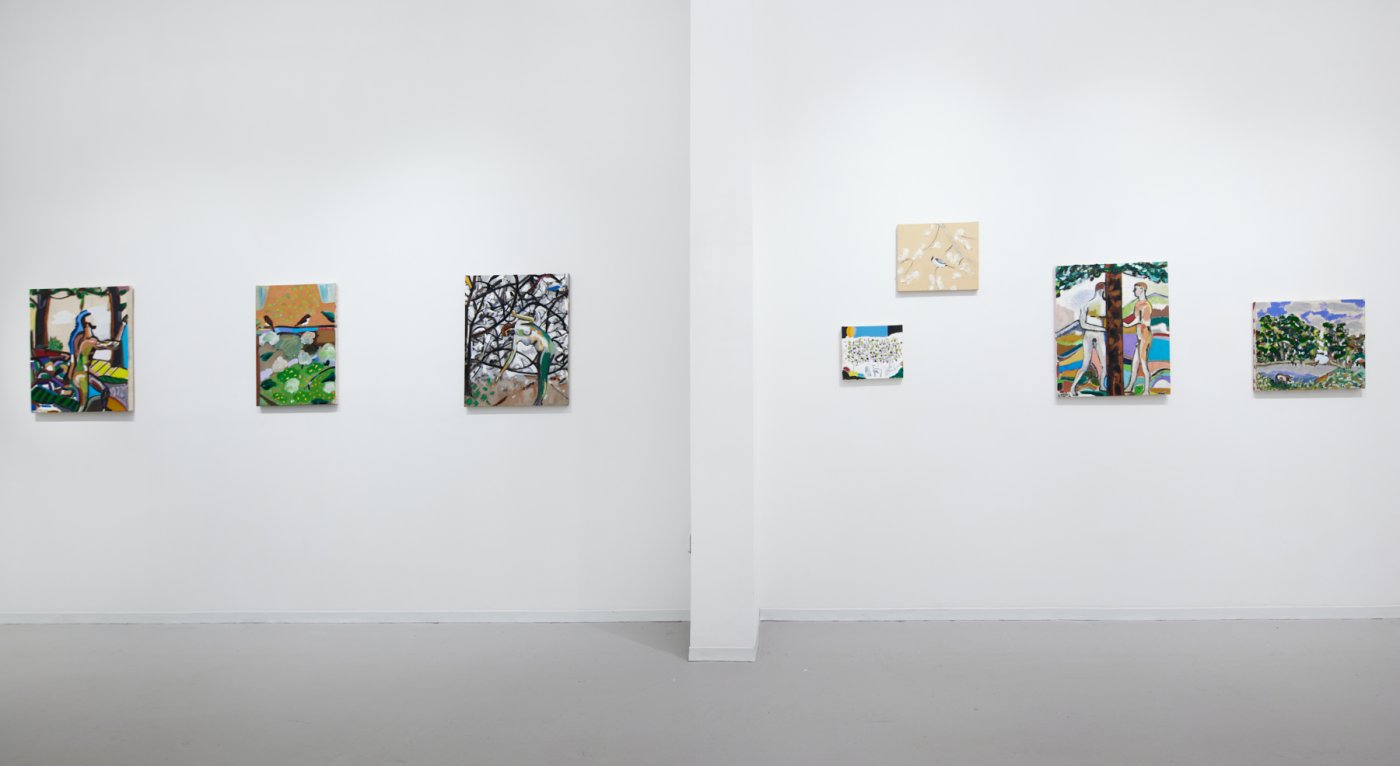 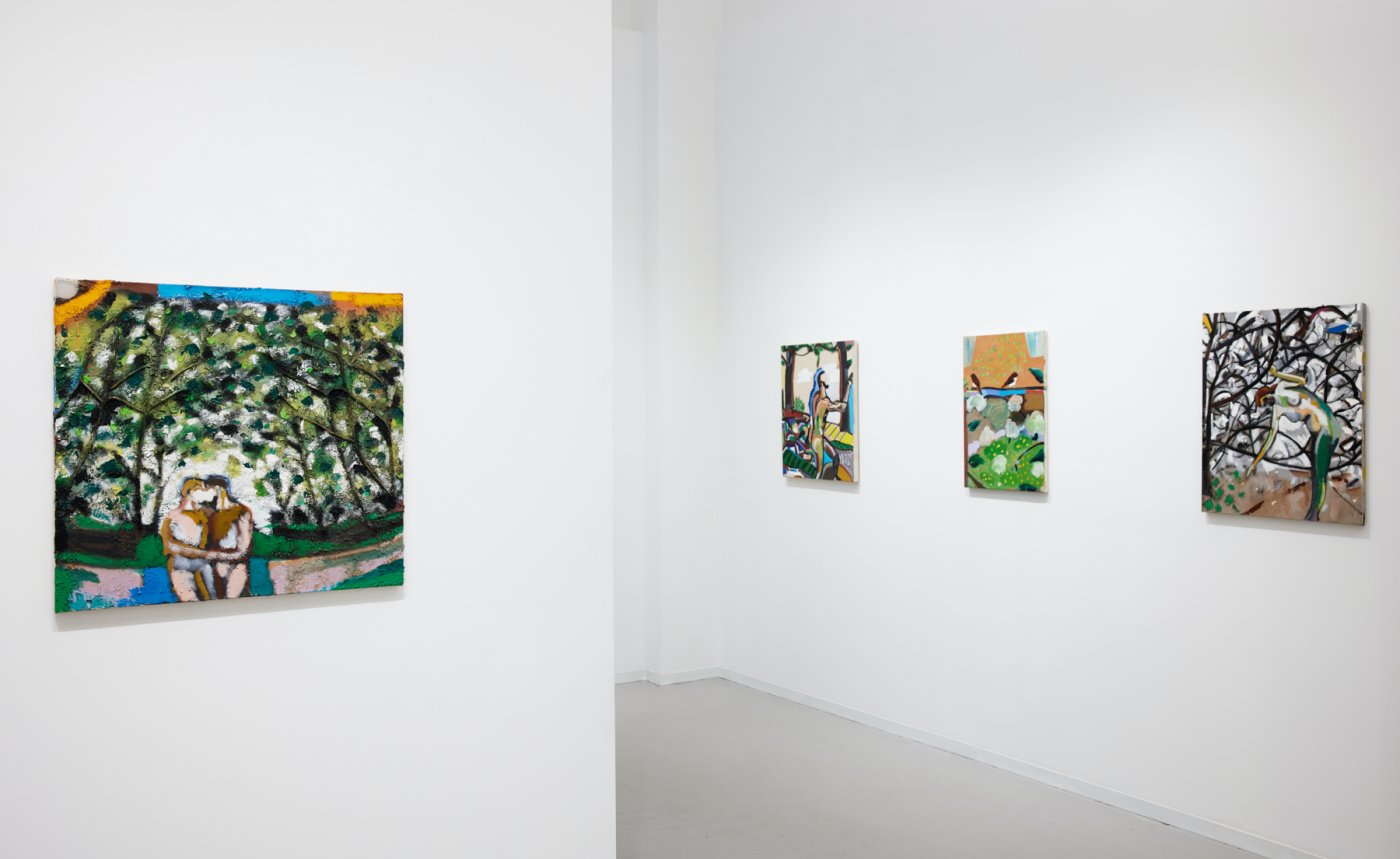 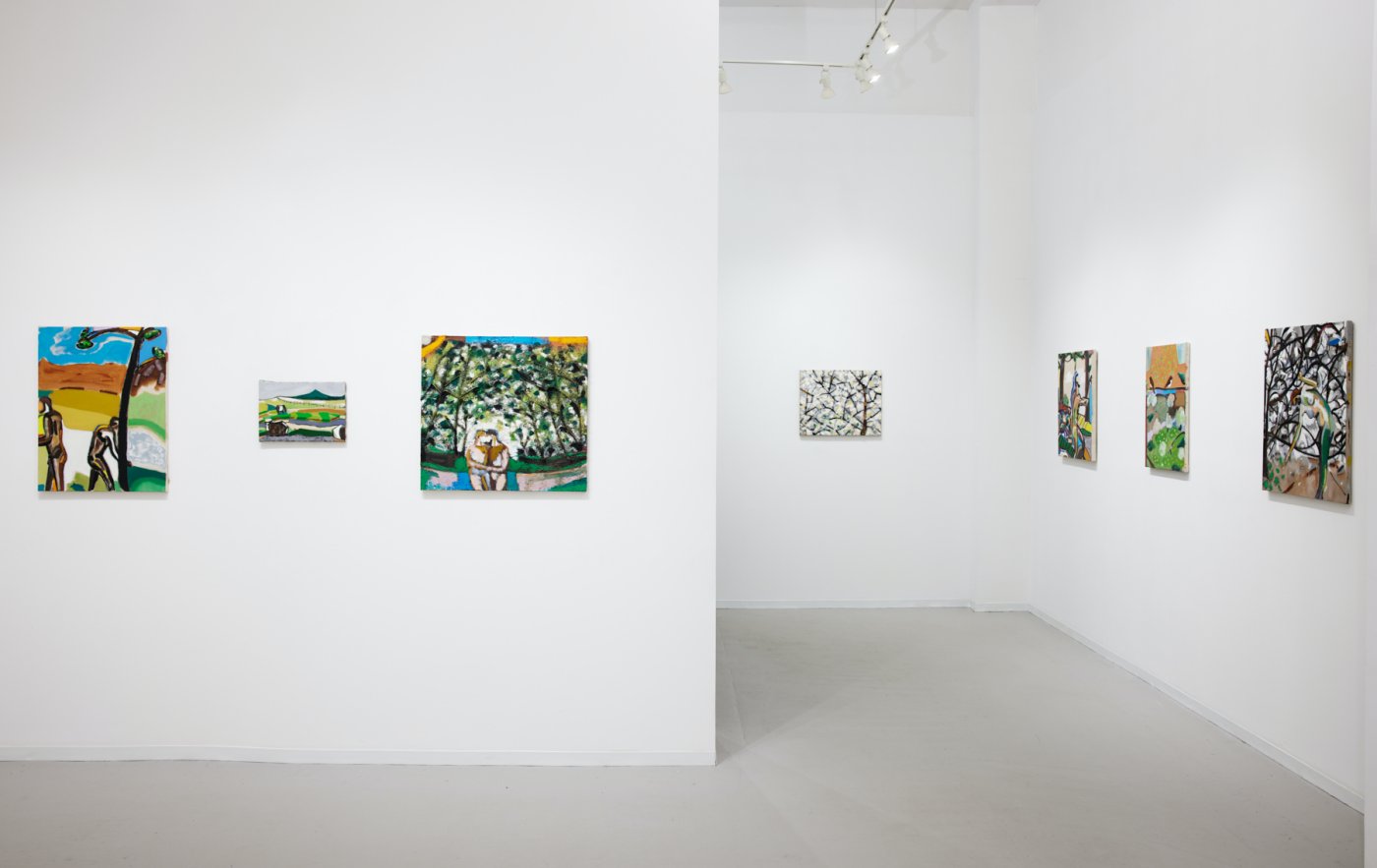 The imagery is of landscapes and figures that reference Modernist pastoral painting, yet the artist considers the paintings abstractions. The images include nude bathers, mythical figures, animals and birds along with detailed fragments of trees and branches, windmills, valleys, hillsides, rivers and ponds. The abstraction comes from the not-so-traditional palettes (reminiscent of Impressionism and Modernism in general), the medium and novel materials as well as alterations to the perimeters and manipulated surfaces of the canvas (something near and dear to the artist). There are 30 paintings of an intimate size in the presentation, ranging from 8 x 8 inches square to 28 x 23 inches with only one large painting measuring 52 x 42 inches.

At first glance, the small to mid-sized paintings of William Staples read as bucolic scenes in the Modernist tradition. However, upon closer examination, while they remain a very contemporary spin on pastoral scenes inspired by the Hudson River School and French Barbizon School with influences from classical Chinese landscape painting, Staples’ paintings are fresh, full of energy from the infusion of vivid colors, whimsy of highly textured and gritty surfaces that includes saw dust and granular gel medium along with a literalness that incorporates the use of small tree branches and bark—why not, it is there and available. Staples also does not confine himself to the fixed perimeter of the stretched canvases. Instead, if a tree branch or shrubbery needs to be extended to balance the composition, then, so be it. Voilà, a tree branch is added and he lets it overhang the canvas and support.

Beyond the formal qualities of Staples’ paintings, the more interesting and notable aspects are twofold. First, regarding technique and the compositions, Staples truly has a gift for capturing the essence of a gesture or scene with an economy of means by using color, line and context. He does not paint a photo-real depiction of a particular view or landscape, nor of the nude bathers. There is very little detail in any one element, but rather, he captures the situation and moment by providing just enough context. His deliberate use of color not only provides modeling of the figures, animals and trees, but also immediately sets the tone and mood in each vignette. Similarly, his sparing but thoughtful use of line is what defines movement and action. By keeping the settings small and confined to a singular focal point, he also creates intimacy. Especially with the nude bathers, which makes the situation or moment so intimate, so plausible and so real—possibly from a memory or long-held desire with someone special. The lack of details and his primary focus on gesture and context is intimating and very suggestive, thus creating a unique point of entry into the narrative for a broad range of viewers.

The second important aspect of Staples’ artworks is not that he creates a stunning and thoughtful picture as noted above, but instead, he creates a sensation and feeling for the viewer—not a picture, but an experience of the landscape. This comes from the influence of the historic landscape painters of the French Barbizon School who chose to not just copy the landscape as a picture, but to actually be in the landscape and truly see and experience the grandeur of nature. Staples takes those teachings and furthers them by also harnessing his own passion from a situation or landscape, full of his memories and emotions and recreates all of that in an experience beyond a two-dimensional picture. Thereby, letting his paintings convey soul, emotion, honesty and the essence of kindness, community, friendship and romance, whether it be between people or livestock or birds or just the serenity of the landscape.

Capturing a moment, a thought or a romantic encounter in an image is powerful. The bather scenes are very intriguing in that nothing is taboo or out of bounds in these pastoral pictures. In amongst the trees and shrubs, looking peacefully at a bird in a tree or horses grazing in a pasture it seems so innocent and banal, just as two men having an amorous moment while skinny dipping in a stream seems equally natural. Staples is from a generation of enlightened people who are not so wed to traditions, not too quick to pass judgement. In that regard, the content makes his paintings very contemporary and more avant-garde than just Modernist interpretations.

Staples passion for the environment transcends his images and without pummeling the viewer with horrifying scenes of floods, fires and storms. Instead, the innocent and serene settings make the viewer cherish those moments and ponder how we can (and should) preserve them. How do we not let the “powers that be” take the land and nature away from anyone nor everyone, not now or ever? His paintings instill a call to action, not by fanning the flames of anger or fear mongering, but rather by reminding us that we will all lose if we collectively do not act now. If you ever meet Staples you will learn that he is full of fire and passion in his gut, but he is soft spoken and kind-hearted, he chooses to walk softly and wield a powerful paint brush—in the tradition of the avant-garde.

William Staples is a painter who is based in the Hudson Valley in New York. He earned his Masters in Fine Art at the University of Illinois at Chicago in 2002. Staples has participated in solo and group exhibitions nationally and internationally. He was a finalist for the 2018 Artadia Award New York. In 2005 he was given a “12×12: New Artist/New Work” solo exhibit at the Museum of Contemporary Art, Chicago; in 2010 he was included in a group show at the gallery Luis De Jesus Los Angeles in Los Angeles, California; and this past December had his sixth solo exhibition at 65Grand gallery in Chicago. In addition to painting, Staples has also curated five exhibits, most recently “Around Flat” at the Knockdown Center in New York City. Staples has taught studio arts at the University of Illinois at Chicago, Northwestern University and the Bard-Prison-Initiative.

Artist Statement: My practice is a continuum with the western art tradition—one that advances primarily through color, line, form, and pictorial space. For me, these formal conventions constitute a vital intellectual endeavor, allowing me to test my knowledge of color, to experiment with diverse materials to produce new surfaces and textures, and to reconsider how the viewer perceives pictorial space by exploring the boundaries between abstraction and representation. Most recently, I have concentrated on traditional western pastoral scenes of bathers, trees, and animals while drawing inspiration from Chinese landscape painting and the French Barbizon School.