Galerie Max Hetzler presents Works on Paper, the second solo exhibition by William N. Copley with the gallery, on view at Bleibtreustraße 15/16, in Berlin. 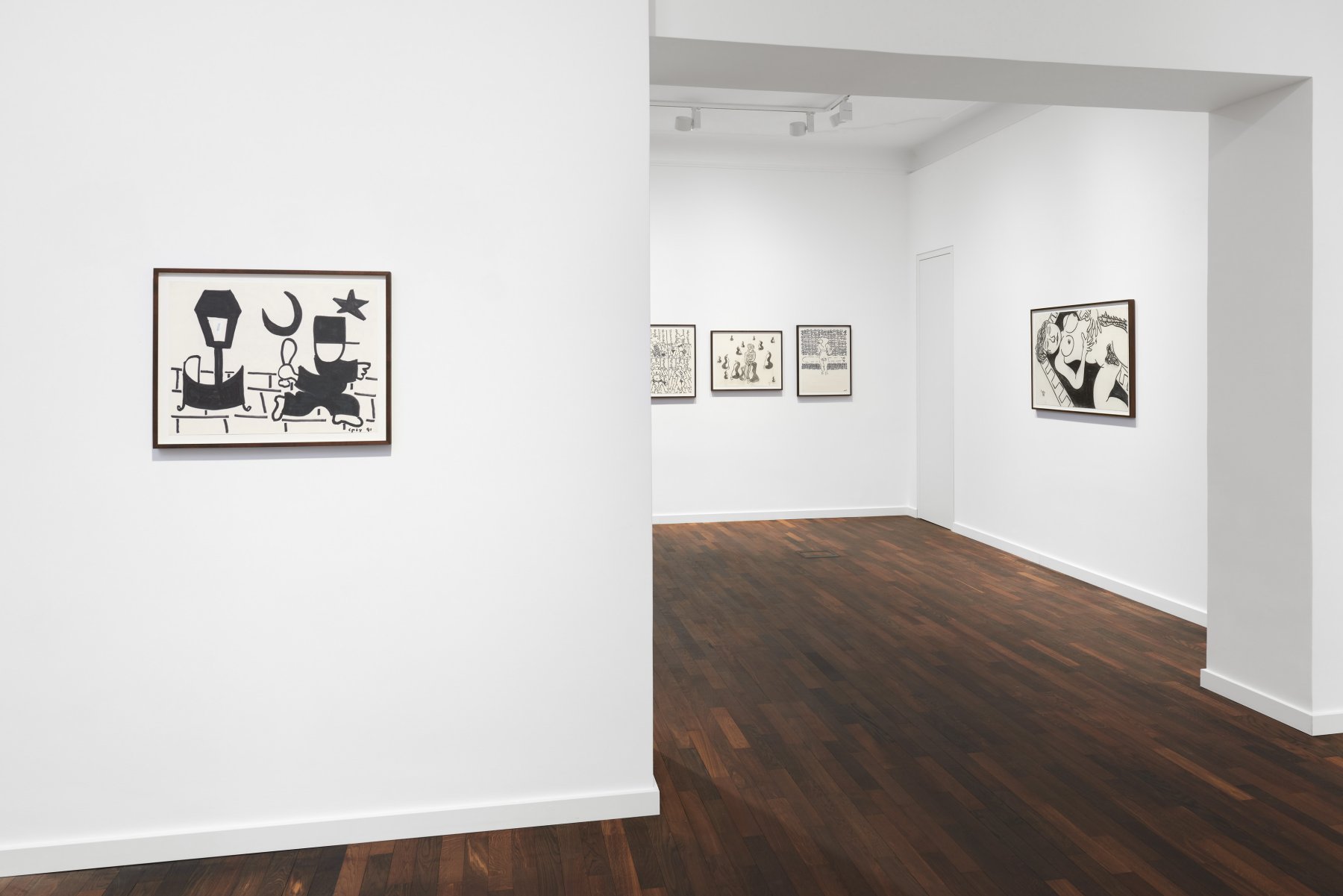 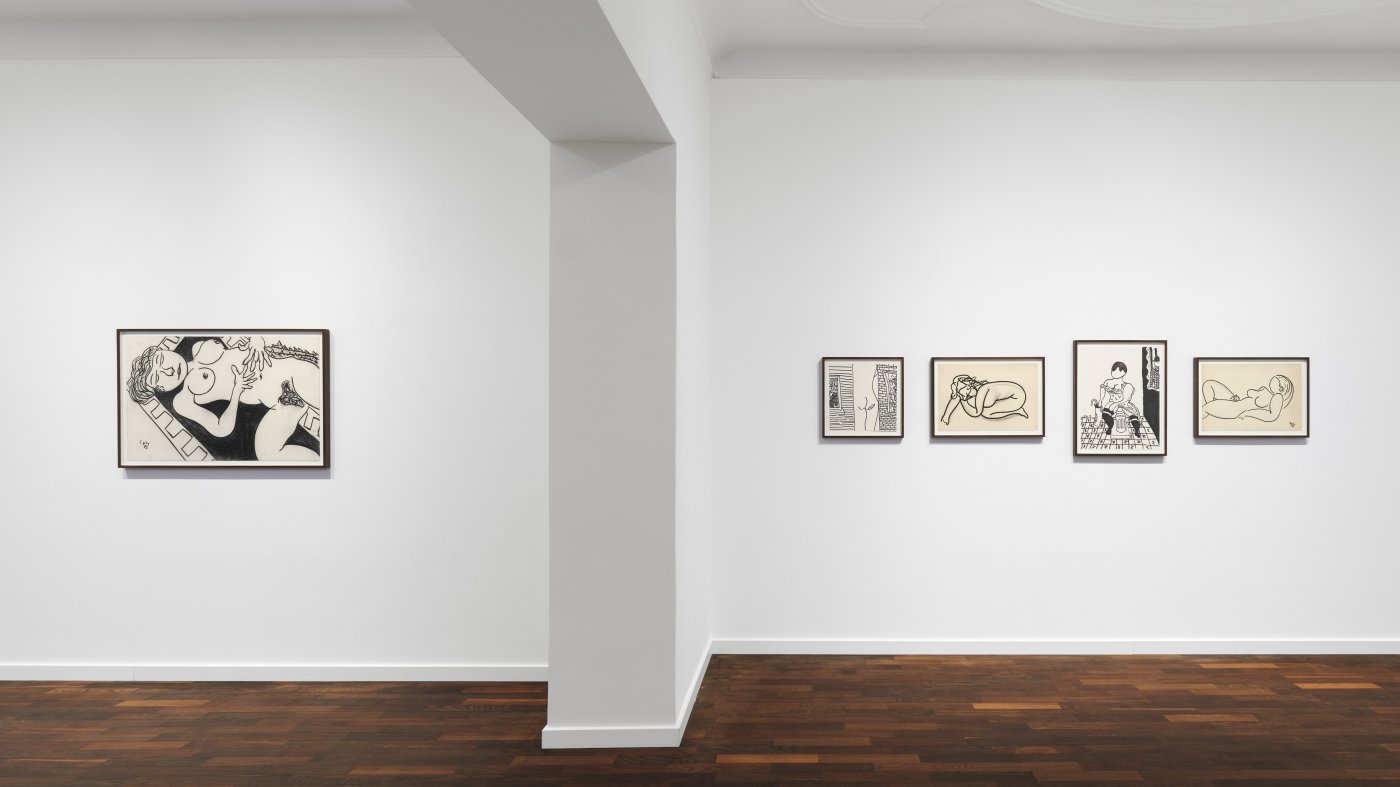 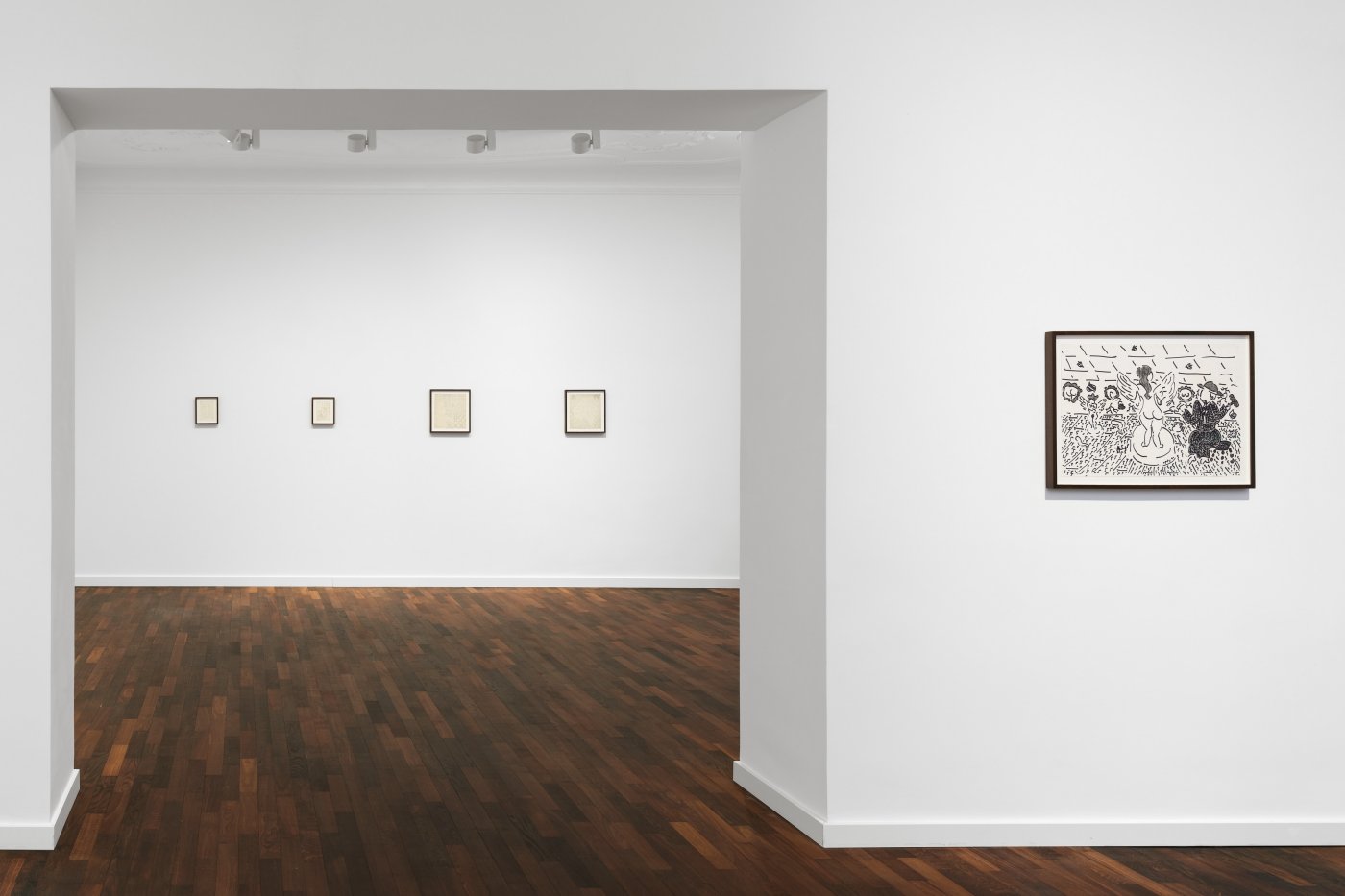 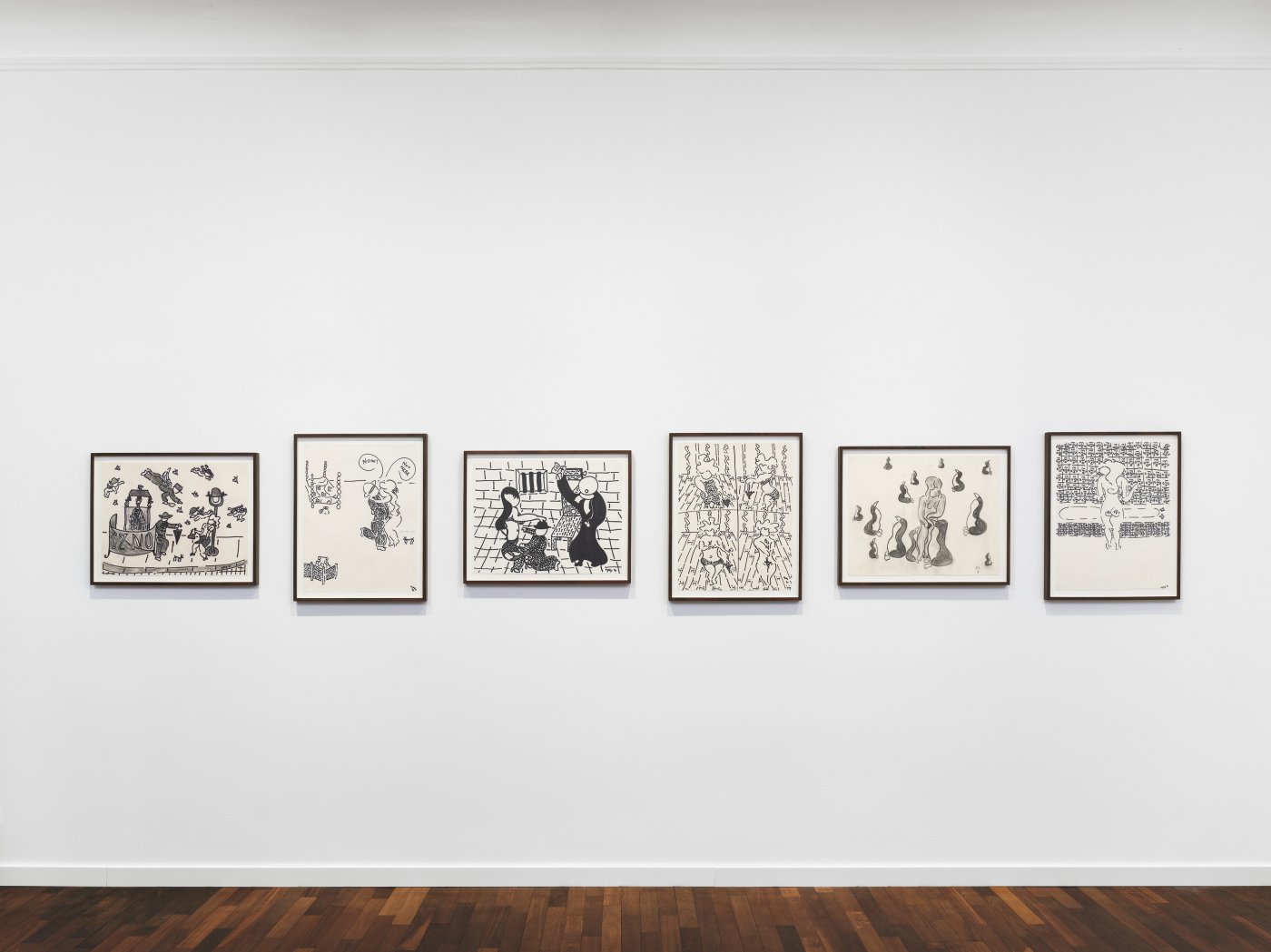 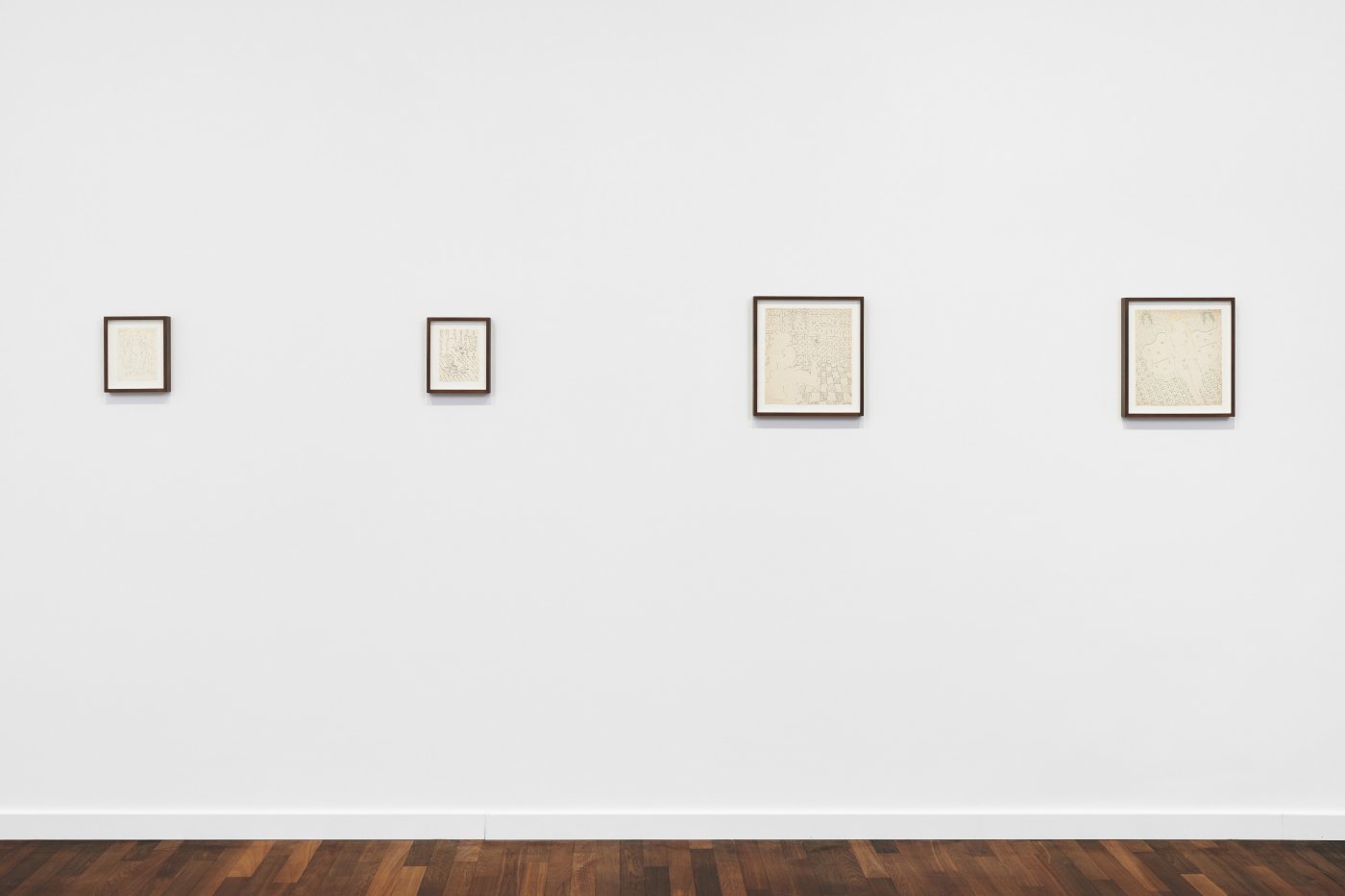 Celebrated today for his unique contribution to post-war art, William N. Copley (1919–1996) arrived at his own practice through his friendships with artists from European Surrealism to American Pop Art. Bridging the gap but staying true to his own individual style, which was largely self-taught, the artist used flat colours, stark outlines and heavily simplified forms to create paintings rich in symbolism, allure and allegory. Not only a painter, but a writer, gallery-owner, collector, publisher and patron to the arts, his animated works abound with playful, baroque patterns and visual puns, combining politics, sex and satire under the signature CPLY.

Throughout Copley’s work, his subjects and vocabulary remain consistent. The artist’s journey through life, gathering experiences, added increasing volume to flat forms, strengthening his line, and making the works more simple and direct. Themes of love and eroticism abound, with his open depiction of desire and sexuality in a repressed age, making the images psychologically and socially liberating. Images of a leading male figure reappear over time, with the combination of a clothed man and naked woman often playing on questions of power between the sexes. Drawn in the vernacular of Surrealism, the protagonists in Copley’s works have no faces, turning their actions into generalised gestures of love. Rarely is there any real connection between the characters; more than anything, they are studies of life and signifiers of psychological conditions. There are recurrent material fascinations, such as lace and buttons, which also serve as a language for femininity and masculinity and represent figures, such as the prostitute and the soldier, which can be read as representatives for female and male characters. Humour, or more precisely Copley’s love of ridicule as a means of disruption, forms another important element in the artist’s work. He used it to take on big themes, using a very playful, understated expression. This might be most clearly seen in his works on paper, which rely on line, pattern and repetition. In this way, the artist challenged society and explored moral norms, making people think by exploring love, death, politics, sexuality, patriotism and capitalism in his work.

On view at Galerie Max Hetzler are works in pencil, pen and ink and charcoal, representing two groups in the artist’s oeuvre. For one part, there is the focus on the idealised, often classical female form, showing examples of Copley’s preoccupation with the woman as one of the main protagonists in his work. The second group of works is more narrative and features the female figure in a series of scenarios that explore various power dynamics, many of which involve a dominant male figure. Amongst these are images such as the 1991 version of the 1986 painting, I Give Aid and Comfort, which was also shown at The New Museum in New York that year. Others, such as the early pen and ink drawings from the 1960s have all the classic CPLY elements of ornament and patterned background. The compositions are similar to film-stills, making the viewer complicit as an observer of the scenes, whilst the clichéd imagery of erotic photography is echoed in a generalised and often unmistakably humorous way. The focus of this exhibition on the mostly black and white works on paper allows an intimate look into the artist’s thematic and stylistic obsessions and gives a highly personal insight into his work of four decades.