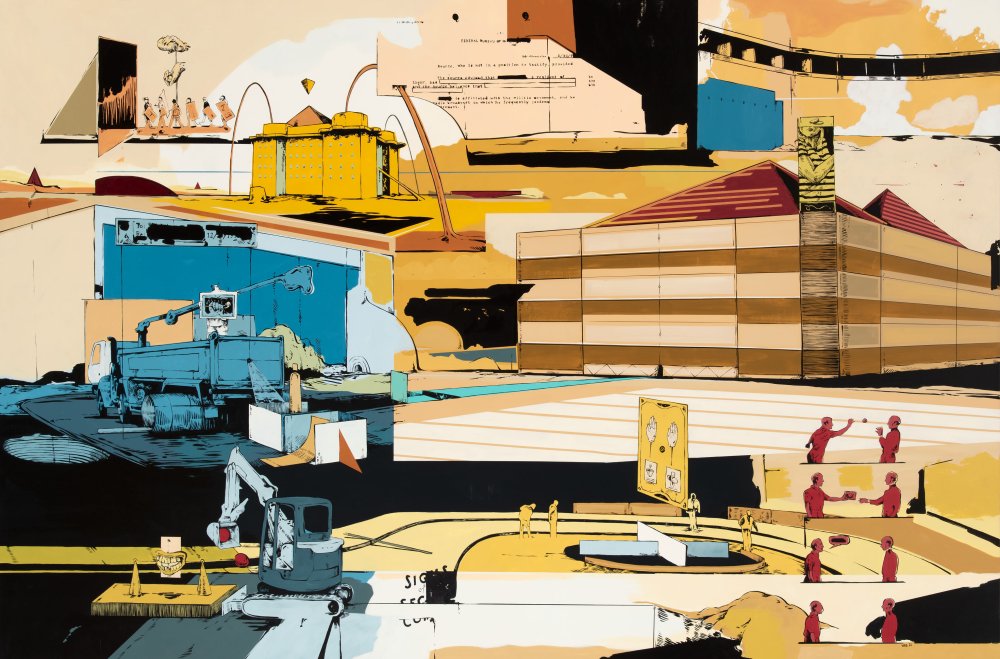 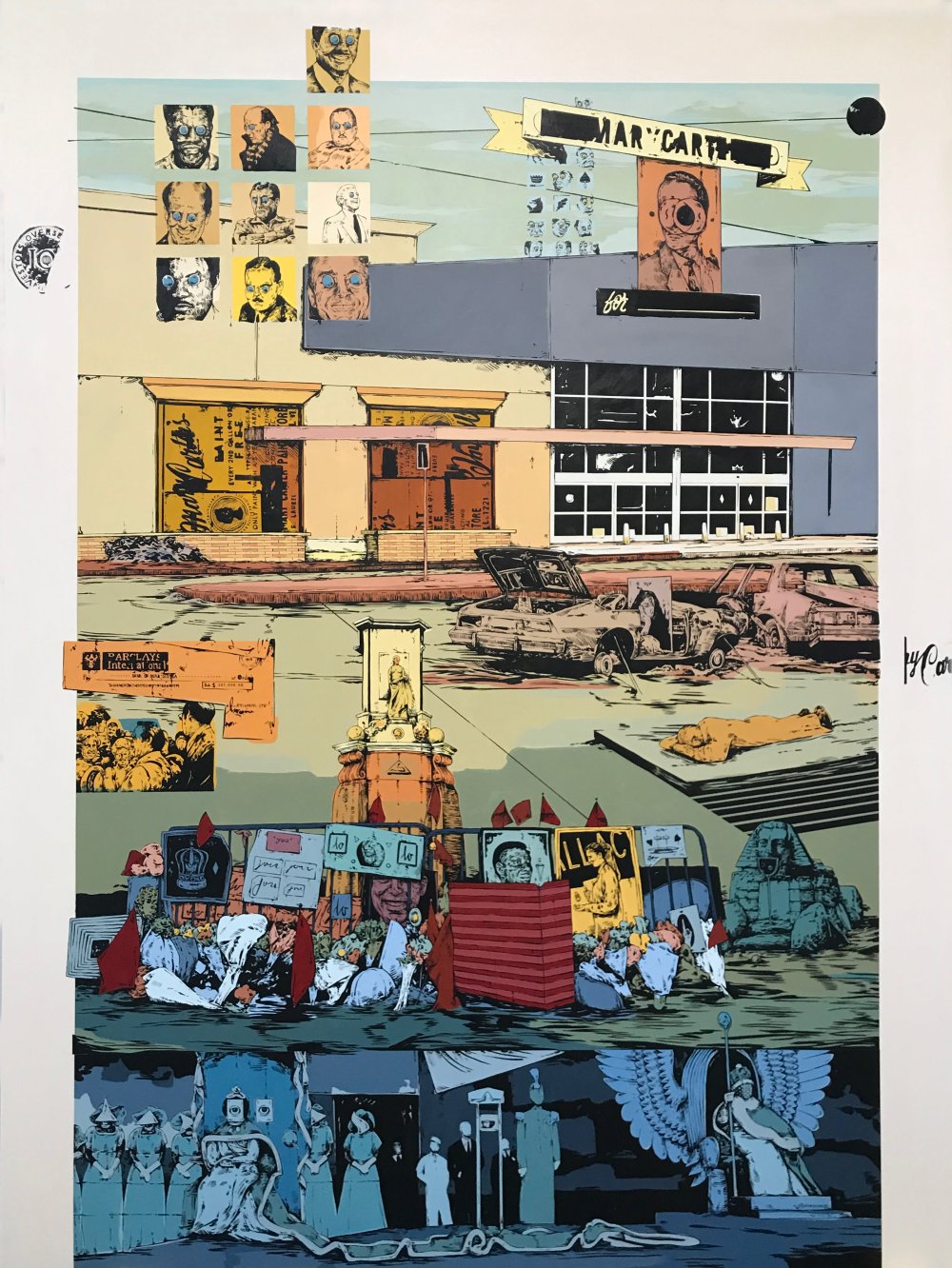 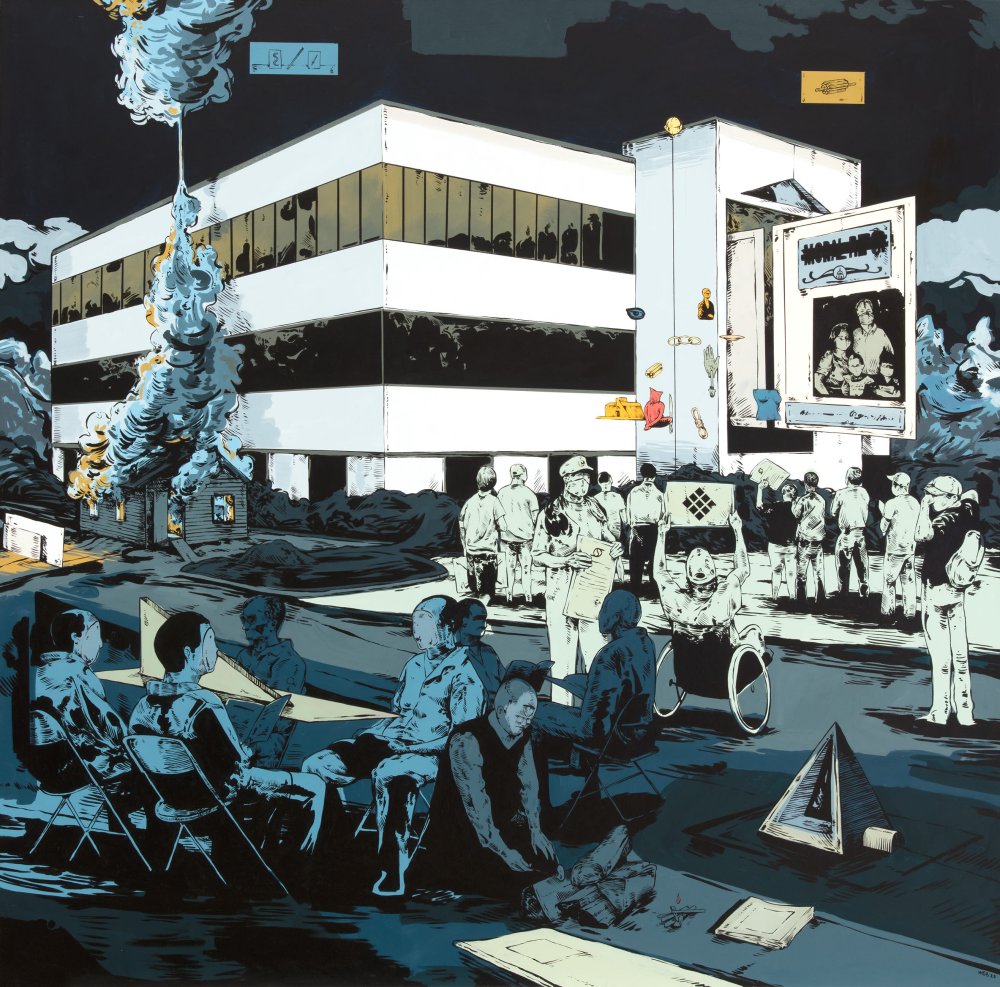 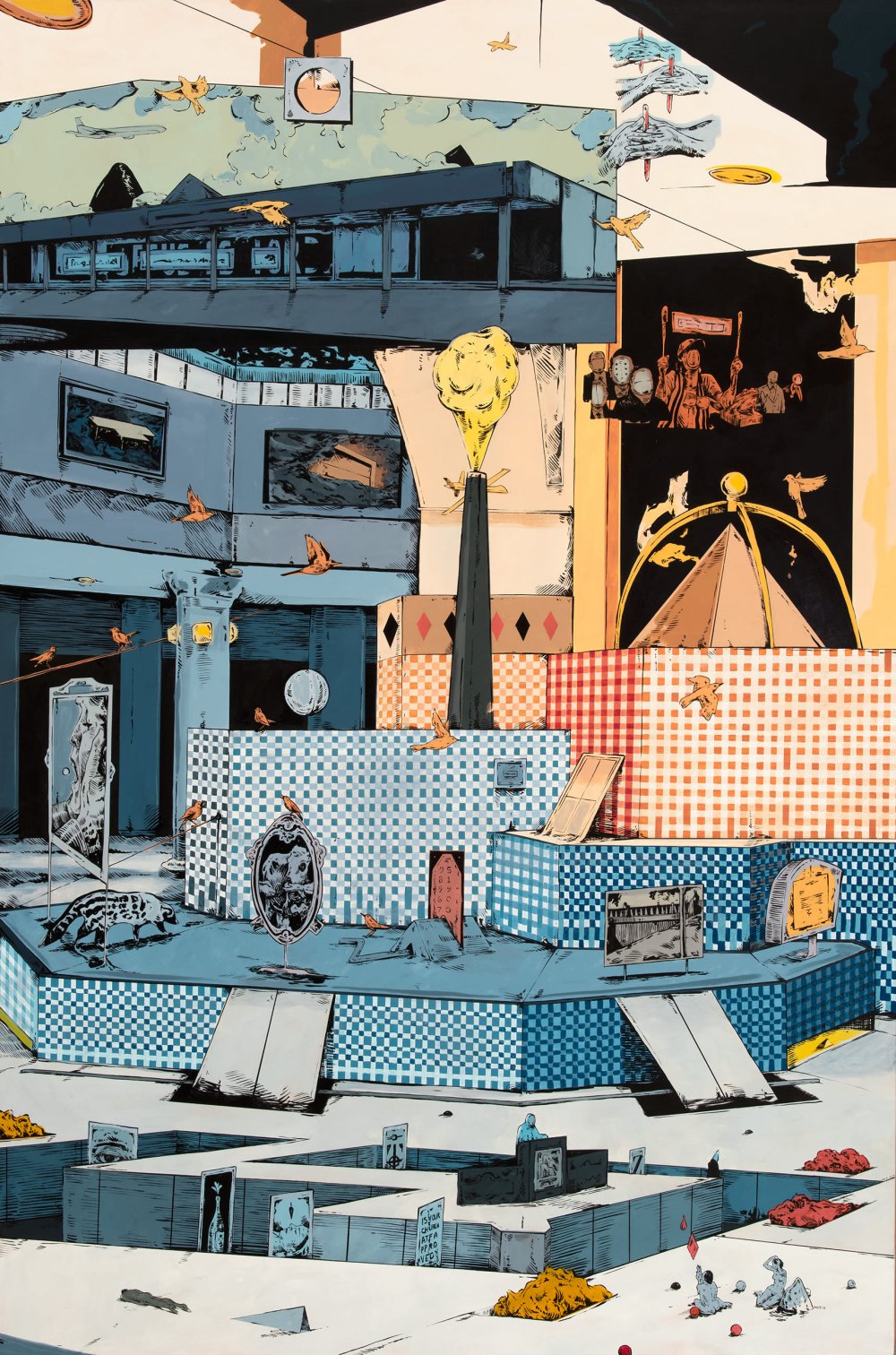 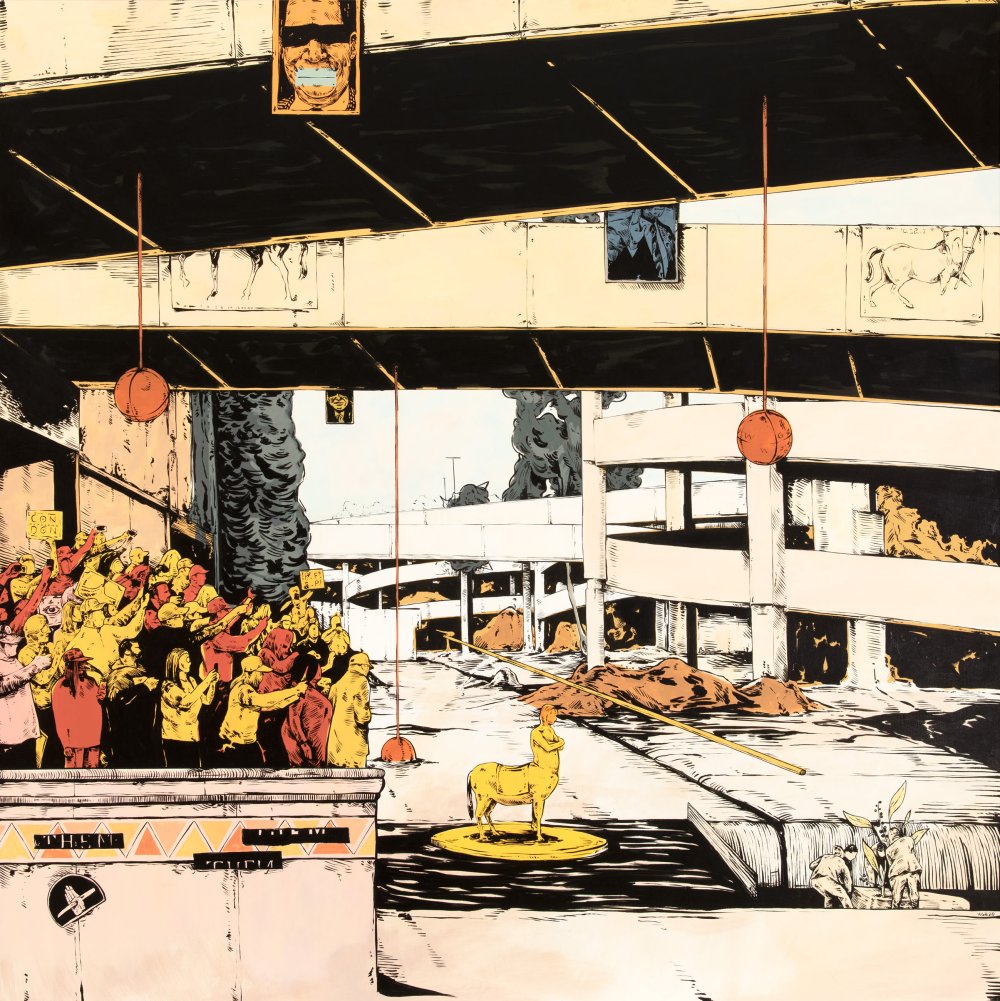 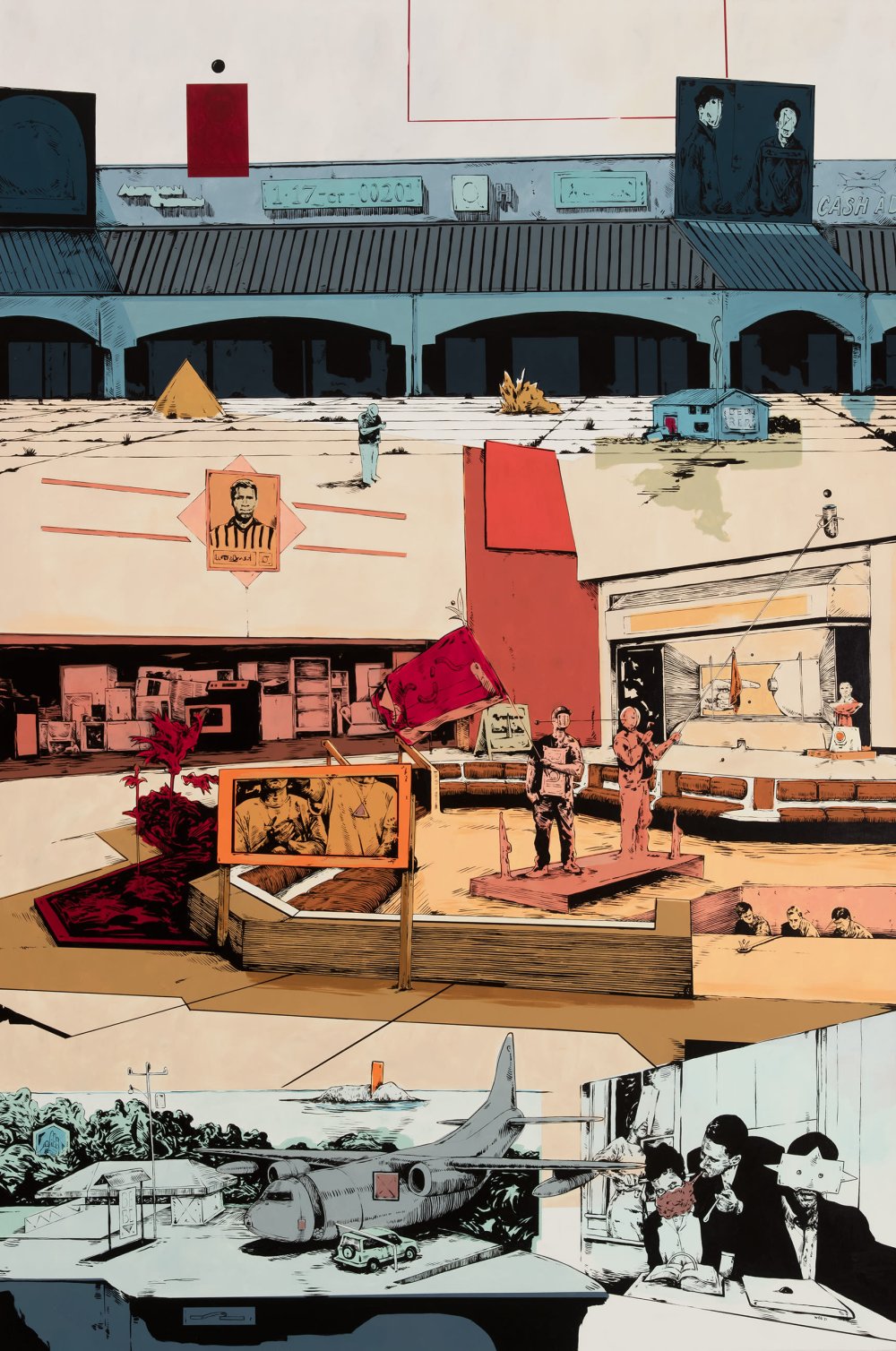 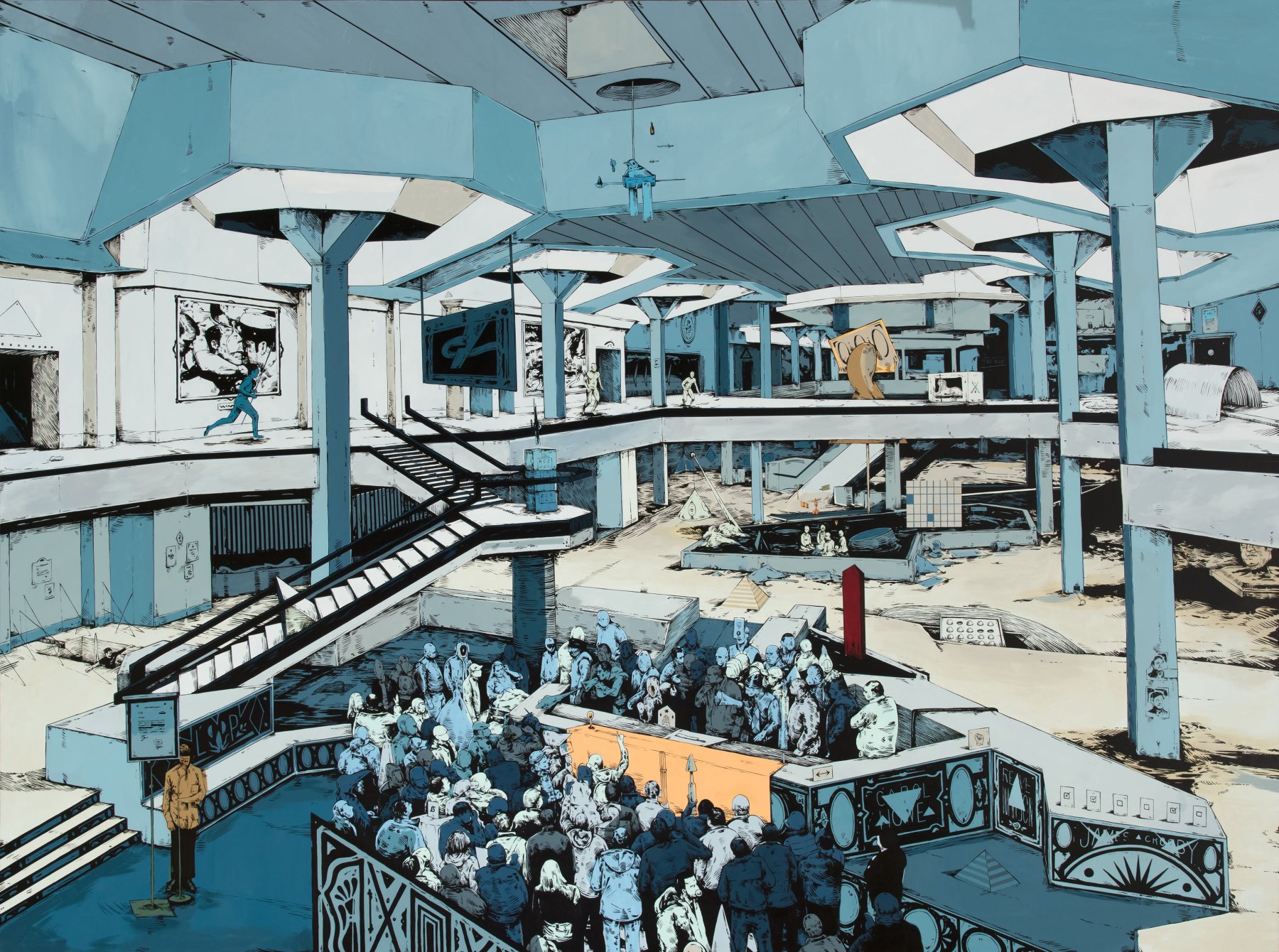 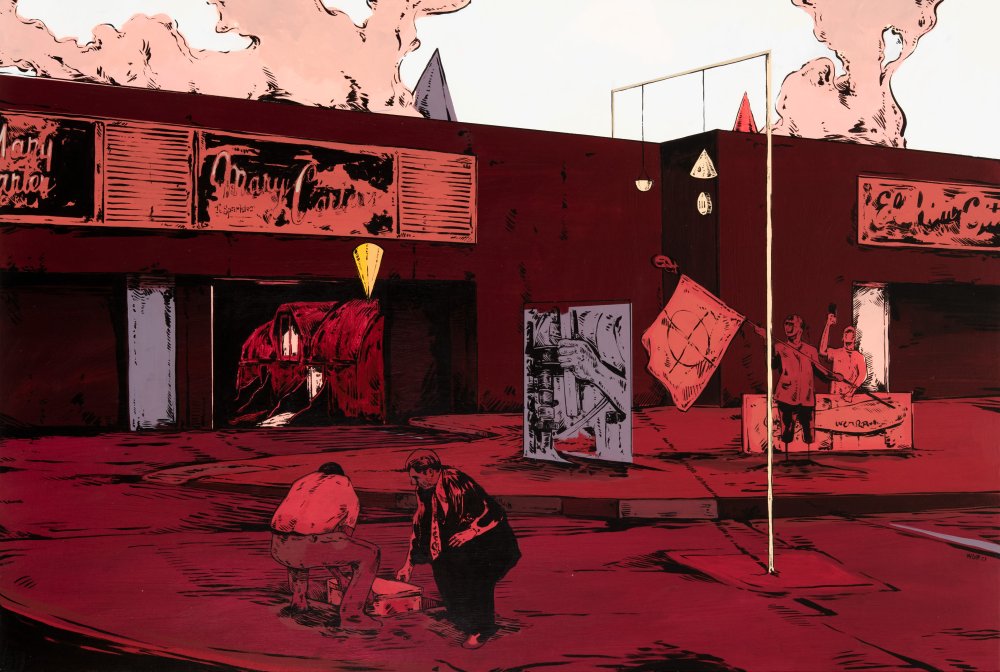 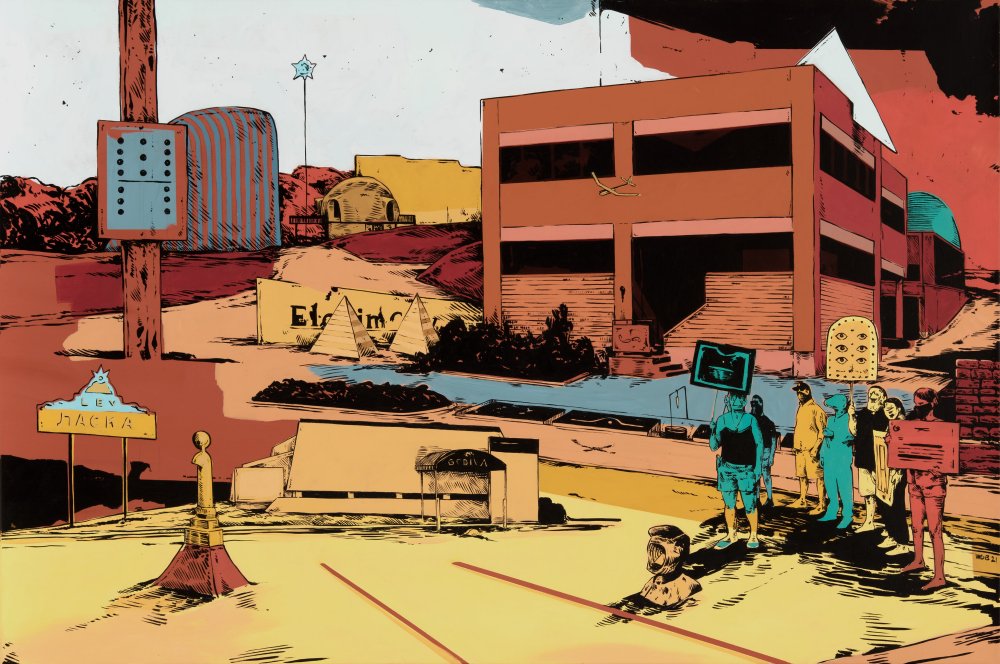 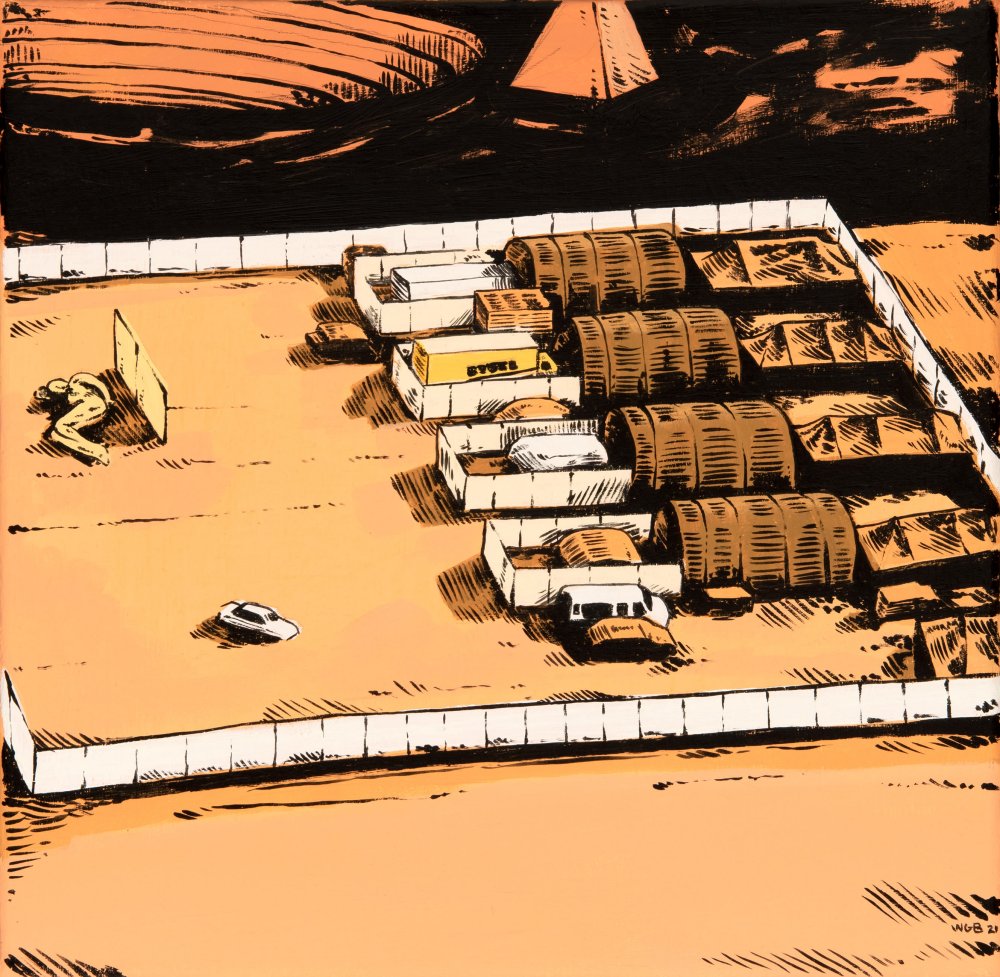 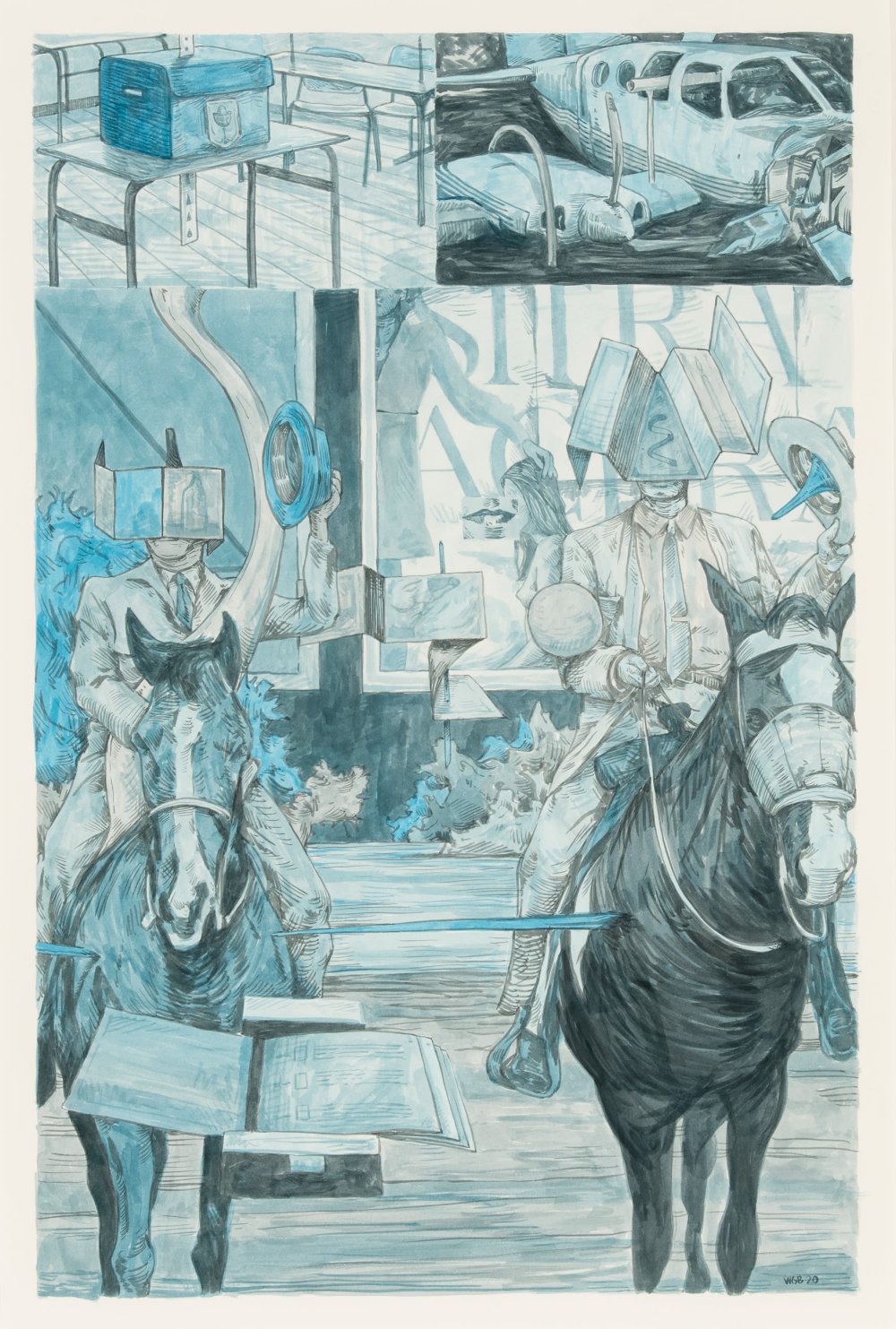 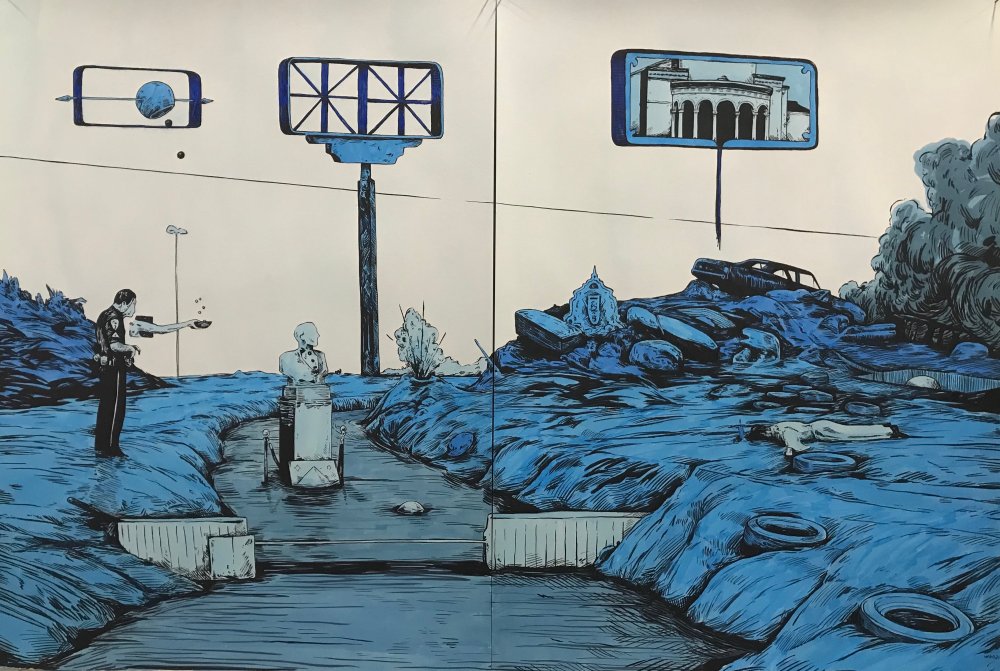 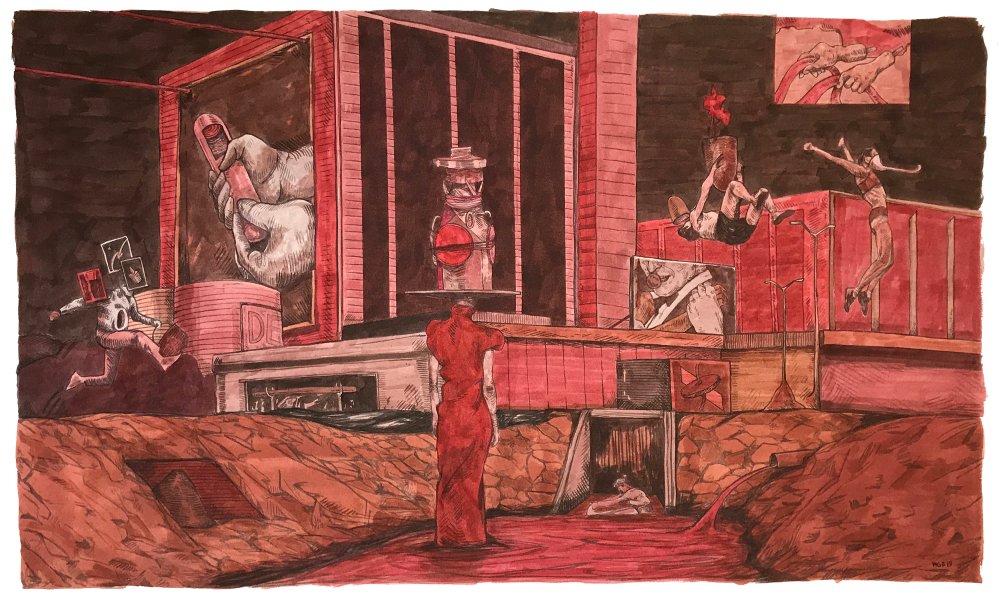 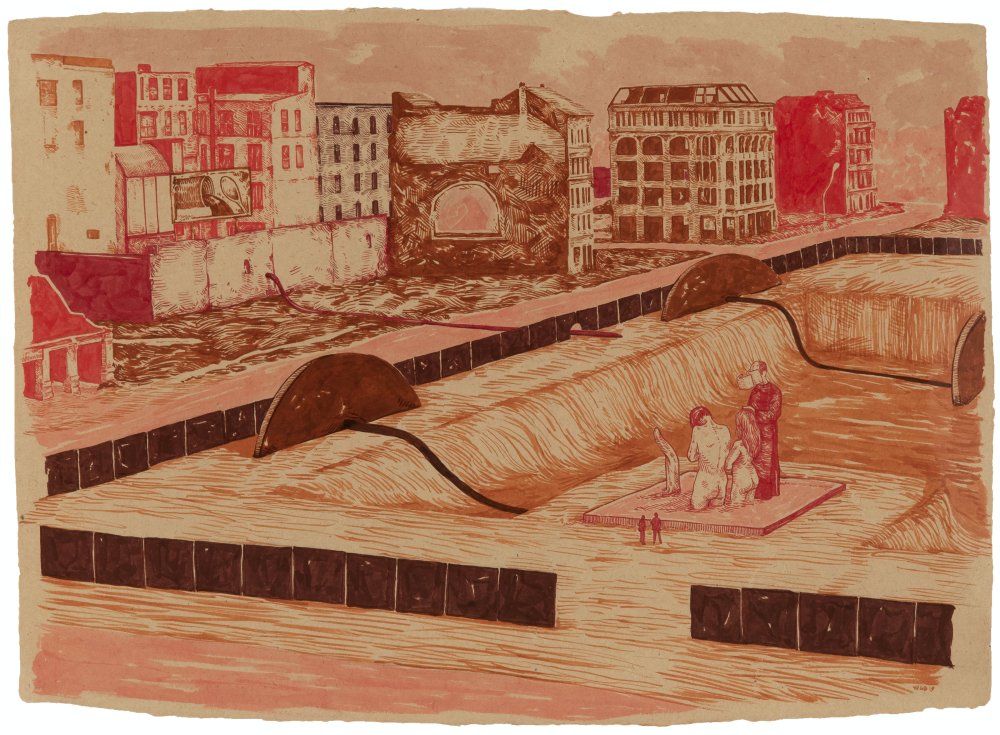 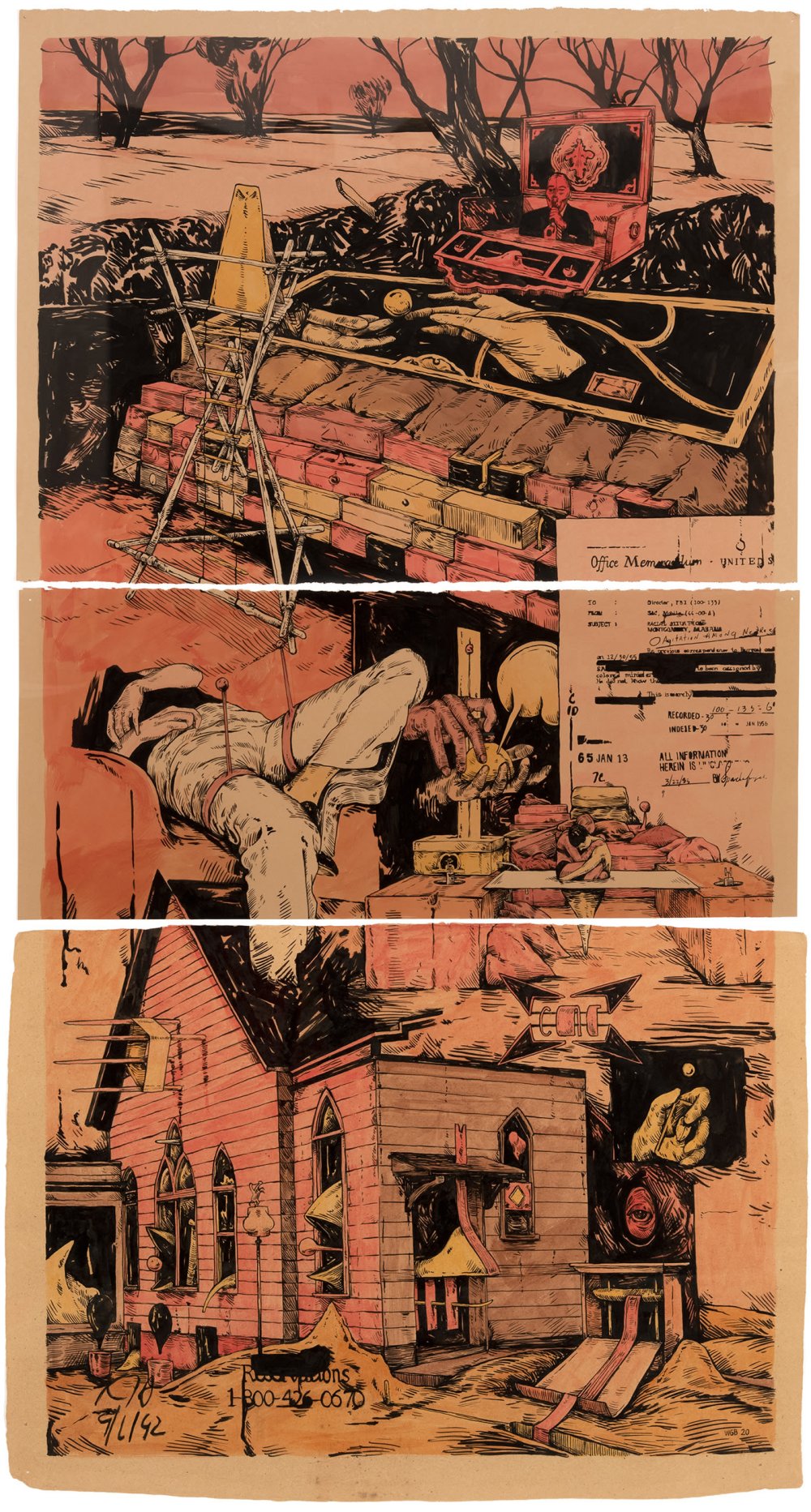 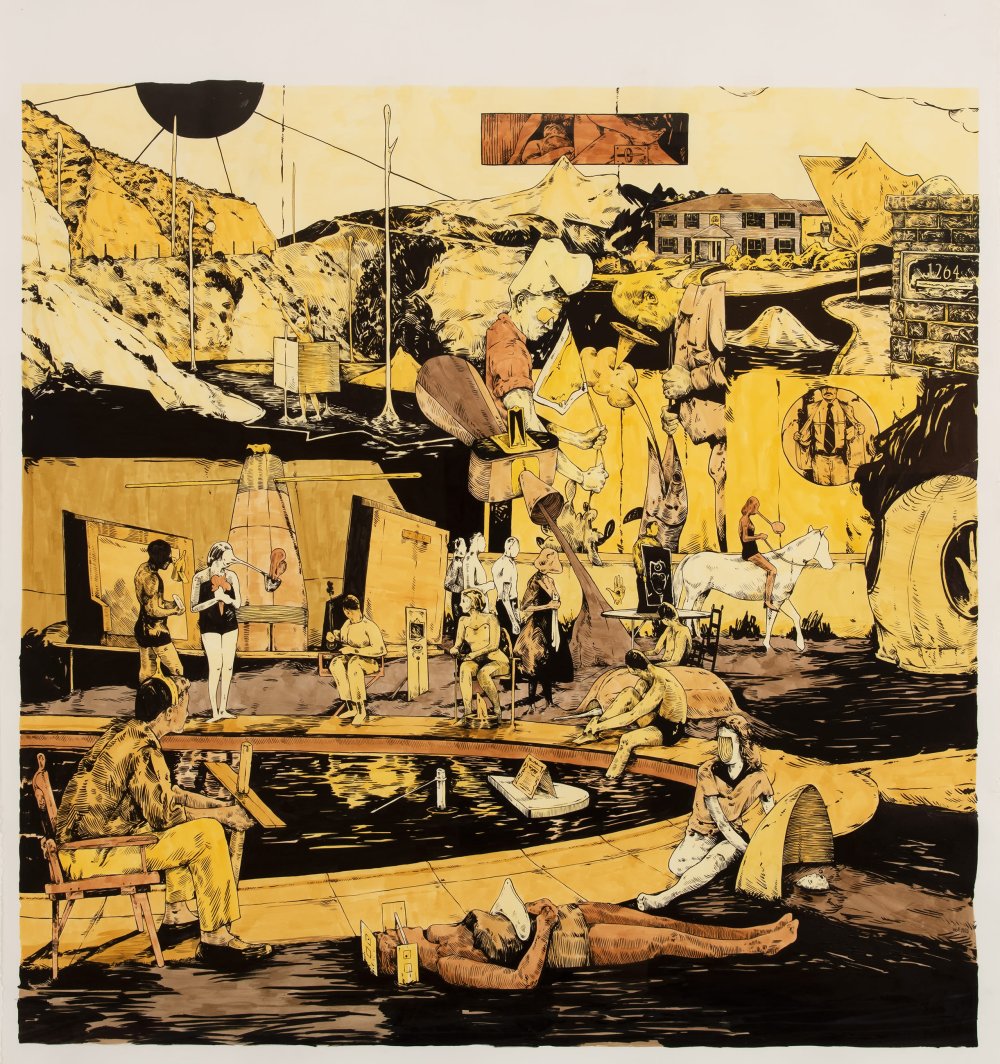 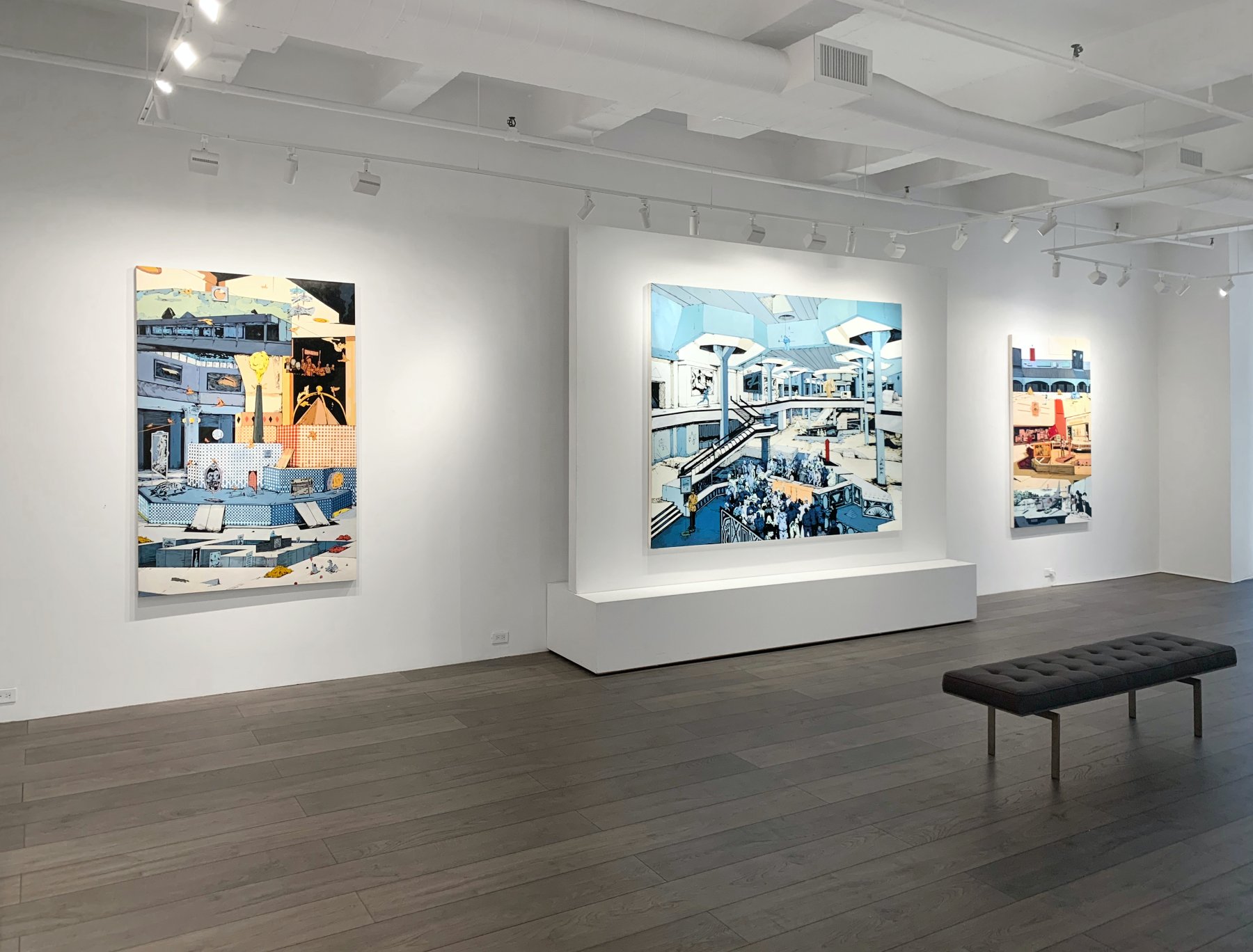 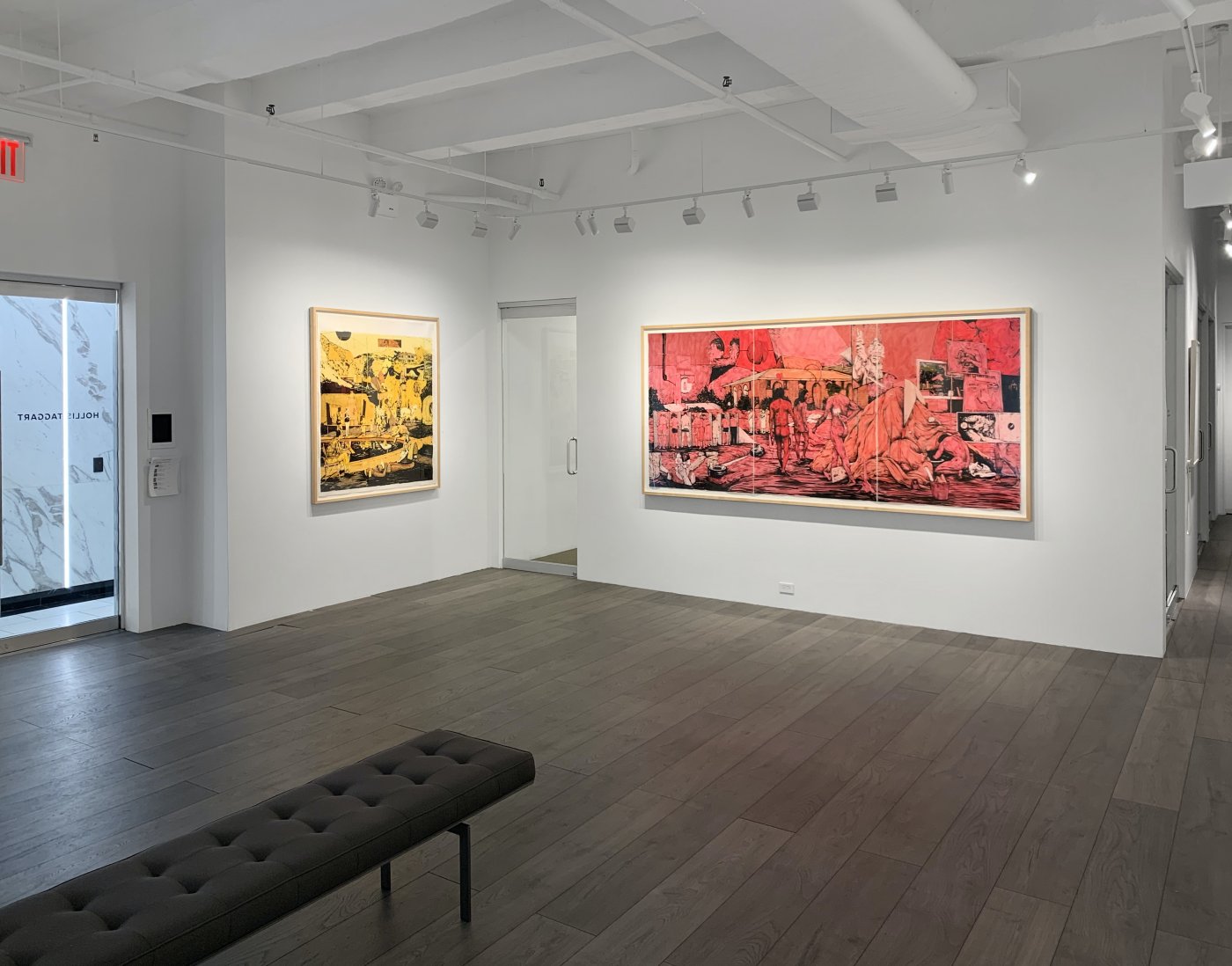 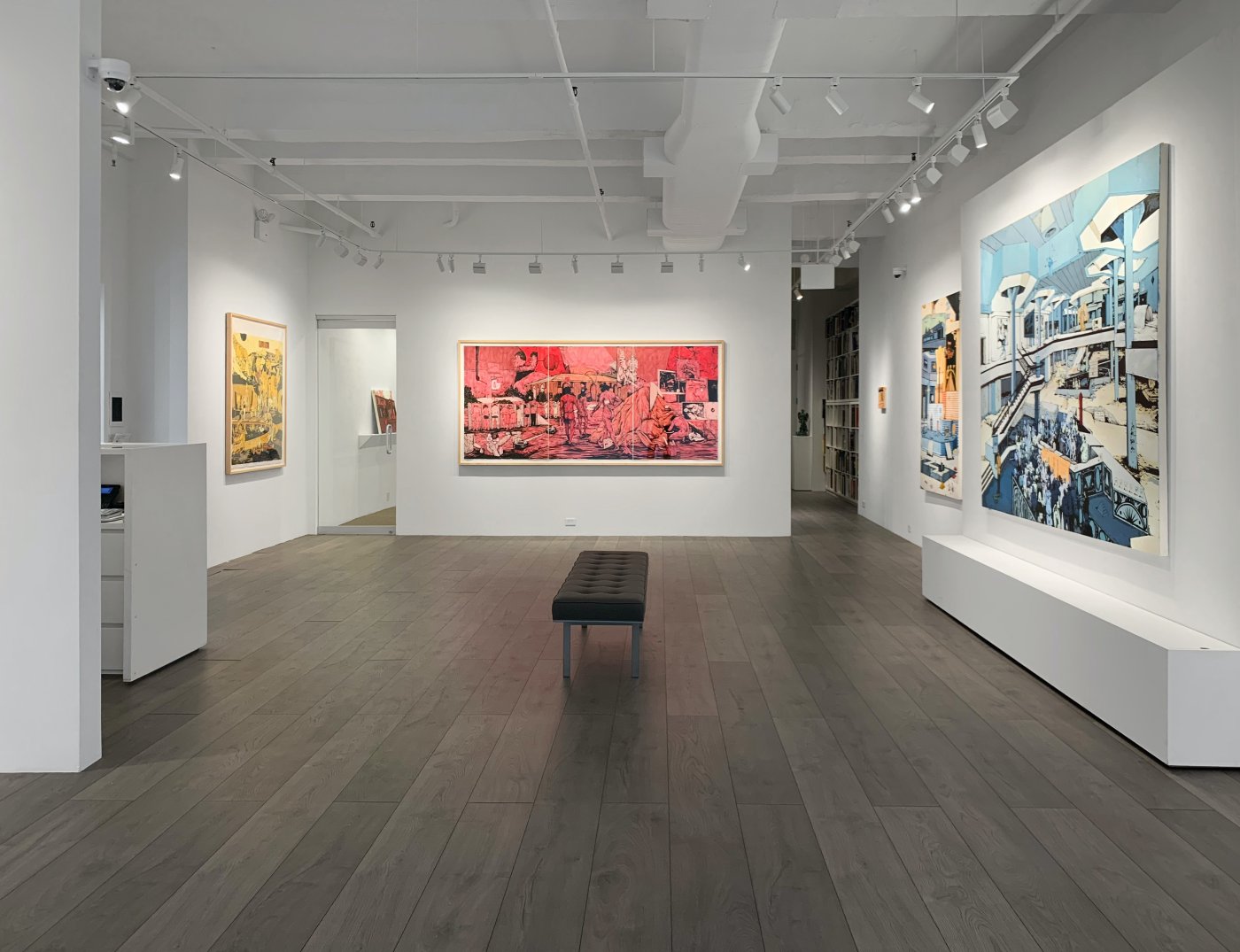 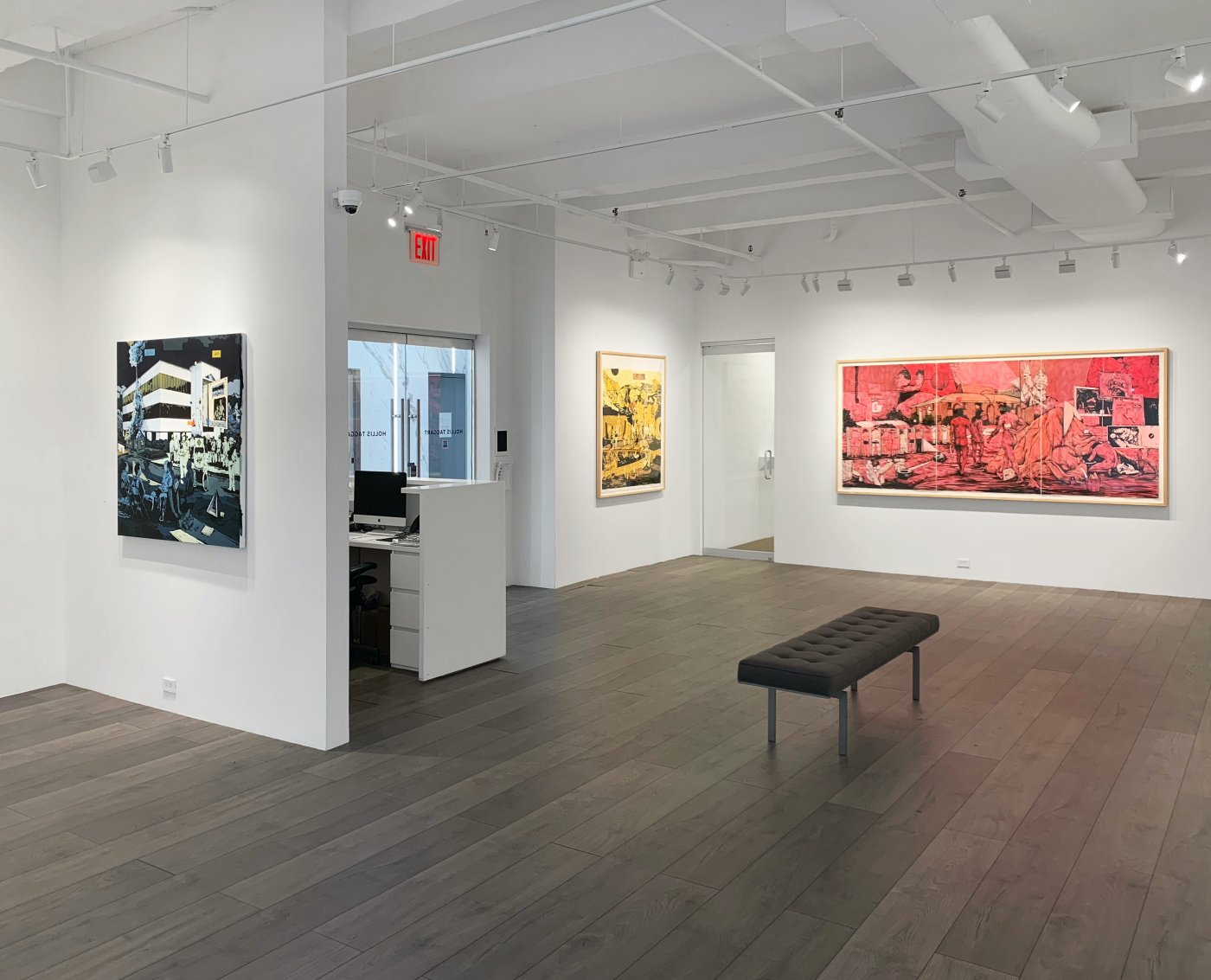 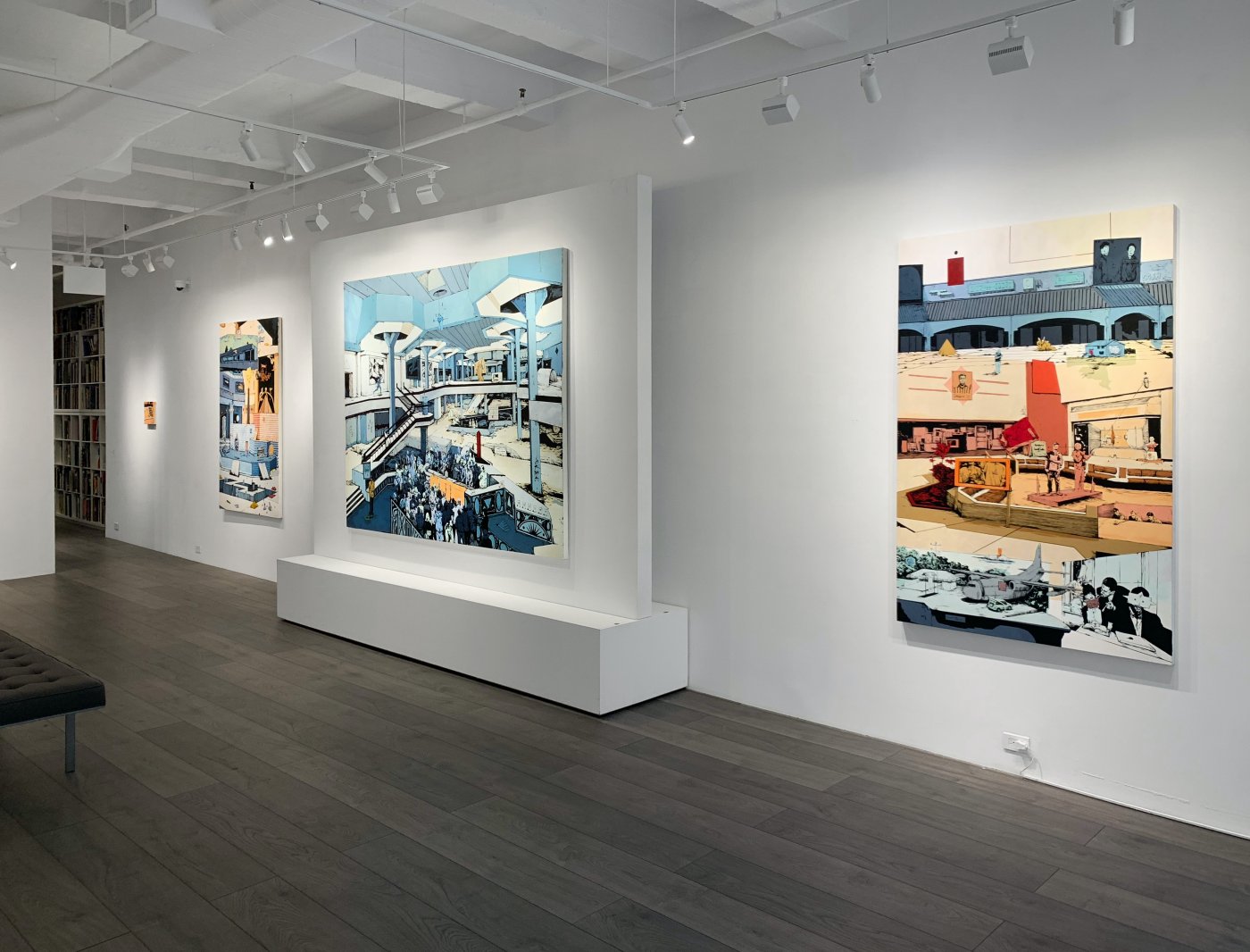 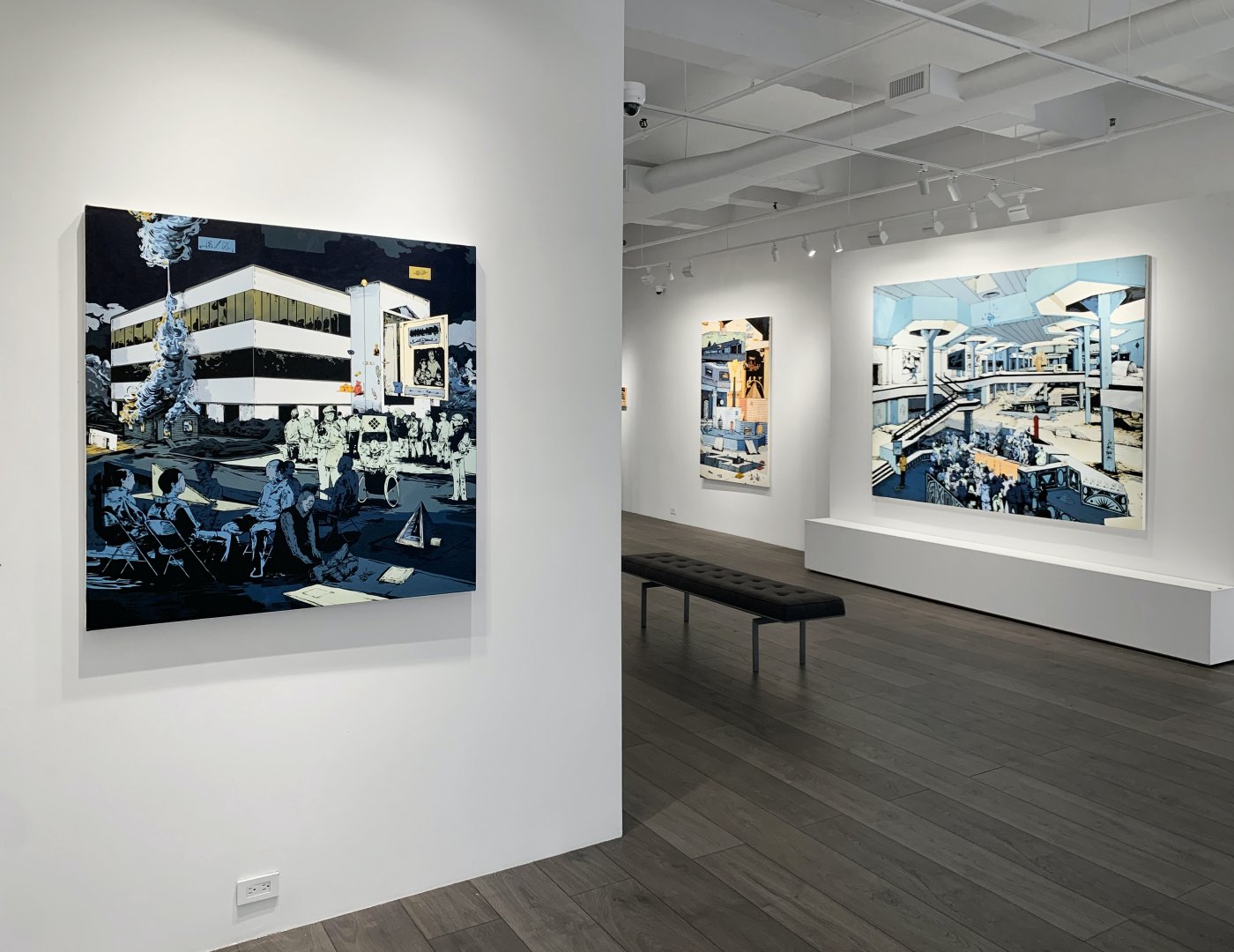 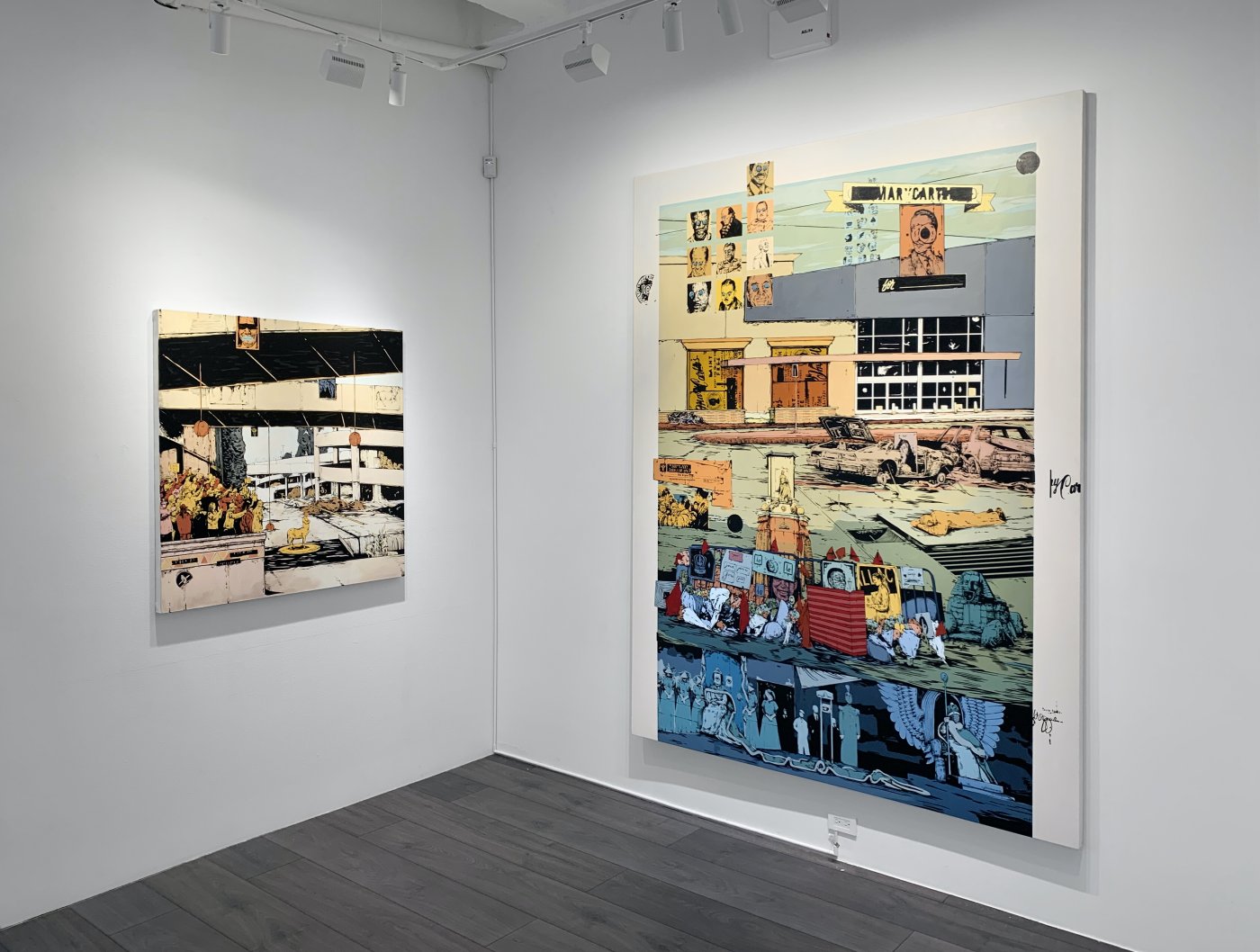 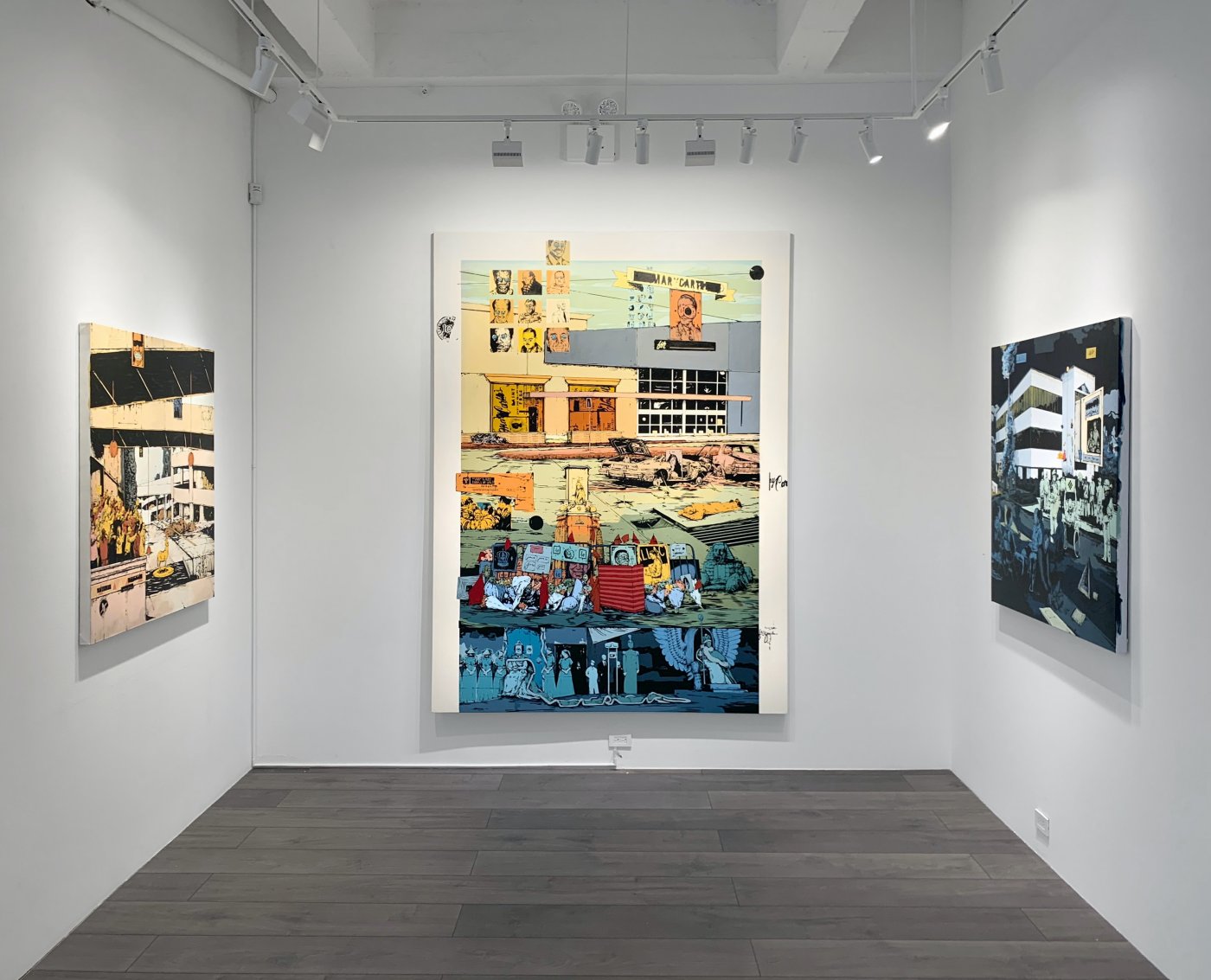 The discovery, examination, and reimagining of a vast array of visual and conceptual references is essential to Buchina’s creative process. His works meld seemingly disparate figures, places, and scenarios into Surrealist-style compositions, offering viewers hints at a narrative trajectory only to leave the trail unfinished or abruptly shifting in a different direction. Produced with the line precision of graphic novels and the bold, flat monochromatics of Pop art, Buchina’s paintings and works on paper are filled with rich detail that compels active viewing and invites personal interpretation.

The open-ended nature of Buchina’s work takes on particular meaning in his two latest series, Scenery and Low Information Settings—the latter of which also gives the exhibition its name—as he draws on the news cycles and happenings that have captivated and divided our nation and the world in recent years. Indeed, Low Information Settings was inspired by Buchina’s reading on a recent conflict in a remote mountainous region, which a news report referred to as a “low information setting” or an area where access to news and outside information is limited. For Buchina, this idea offered a dynamic contrast to places like the United States, where access to content is not only easy but overwhelming, but where misinformation and mistrust of institutions have equally proliferated to detrimental effects.

Information trails—found, shared, lost, and created out of imagination—ungird the works in the forthcoming exhibition. Conspiracy theories, separatist movements, and the broader violence and paranoia that have long existed within American culture but have now burst into mainstream consciousness serve as particular touchstones within the works that comprise both Scenery and Low Information Systems. For example, the three-part drawing, Scenery in Red #4 (2020), alludes, through images and text, to both the 1993 Waco Siege and 1995 Oklahoma City bombing. These references give way to unspecific symbols of religious rites, political worship, and both benign and malevolent advertising, denying any clear articulation of events. While it would be simple to understand such works as offering political commentary, for Buchina, the work is more deeply tied to bearing out these interrelated moments and signs and seeing them anew within the context of the picture plane.

If human actions, individual or communal, have long ground Buchina’s practice, place has also become a central actor. In Low Information Settings, large, commercial spaces, such as malls and offices, occupy outsized portions of Buchina’s canvases. During the early period of the pandemic, Buchina spent a lot of time driving, becoming particularly attracted to the newly found desolation of these spaces and the way that their long-suggested demise had been accelerated by the world’s new circumstances. He began photographing the deserted buildings he came across and researching real estate sites advertising commercial spaces. In Low Information Settings #1, #3, and #9 (all 2020), these places appear nearly or completely devoid of human figures and in varying degrees of degradation—vestiges of a capitalist endeavor suddenly made obsolete. In instances disconcerting, nostalgic, and poetic, the paintings speak to a prior time—one that may or may not return after the pandemic has finally subsided. The ultimate meaning, as with Buchina’s other works, is obscured and left to the viewer to consider and answer for themself.

“Part of the magic of William’s work is the way that it draws the viewer in incrementally. One is often first attracted to the cool, frequently expansive color and the finely articulated lines. This, then, invites a close inspection of a particular moment within the wider canvas or sheet of paper, which further opens up into a bigger narrative. And even after you’ve pulled yourself away, you are still left wondering,” said Hollis Taggart. “That’s when art is at its best—when it inspires the eye and the mind equally.”

William Buchina (b. 1978) has been the subject of solo and group exhibitions in locations across Berlin, Istanbul, London, Los Angeles, New York, and Paris, as well as other cities in the U.S. His most recent solo presentation, titled Between Objects & Actions, opened in 2019 at SLAG Gallery in New York City. He holds a BFA from Pratt Institute. He lives and works in Brooklyn.