David Richard Gallery presents Color Field Paintings from the 1960s and 1970s: Aesthetic Transitions Through Process, Willem de Looper’s first solo exhibition with the gallery and his first in New York City since 1988. 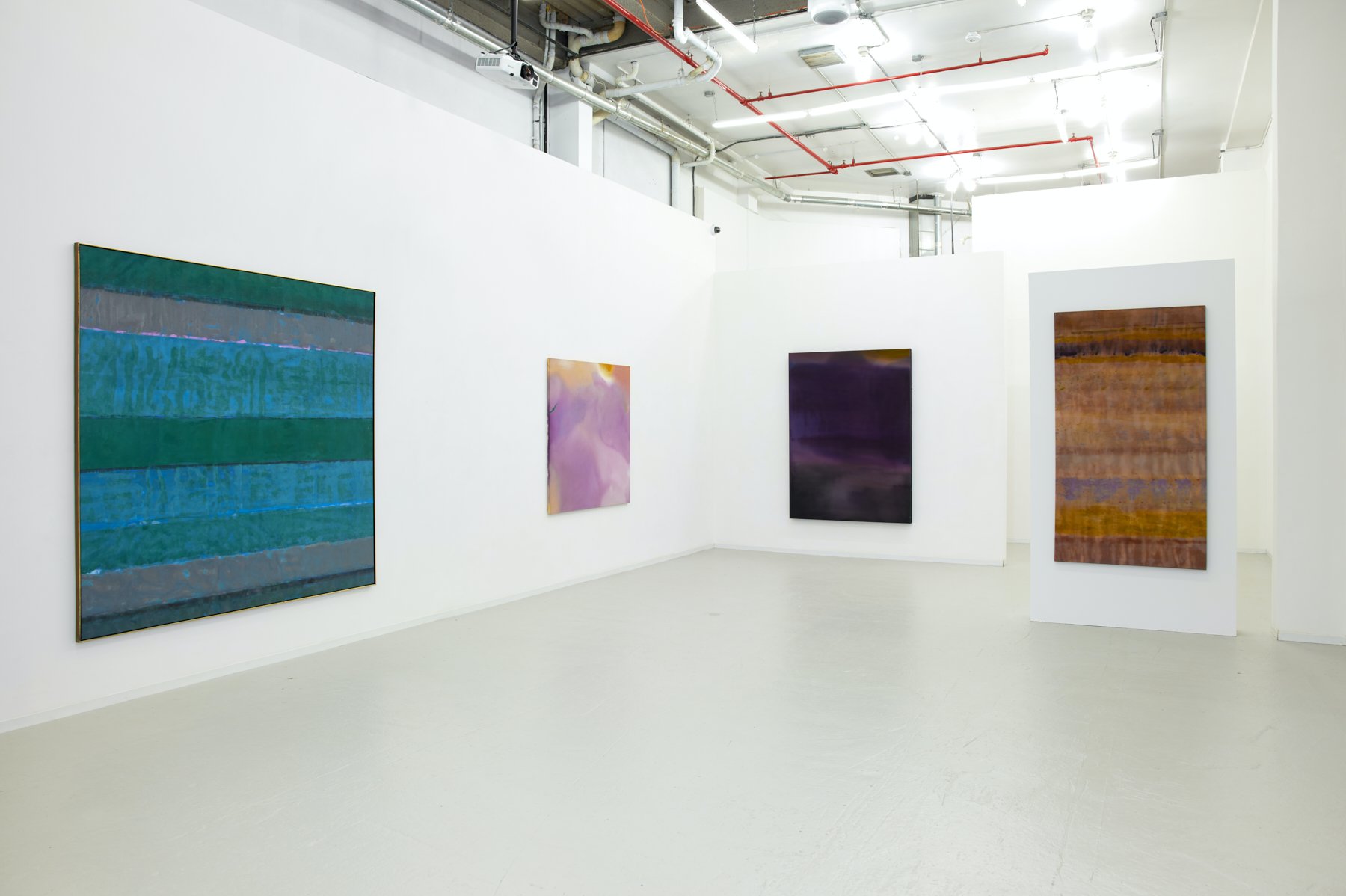 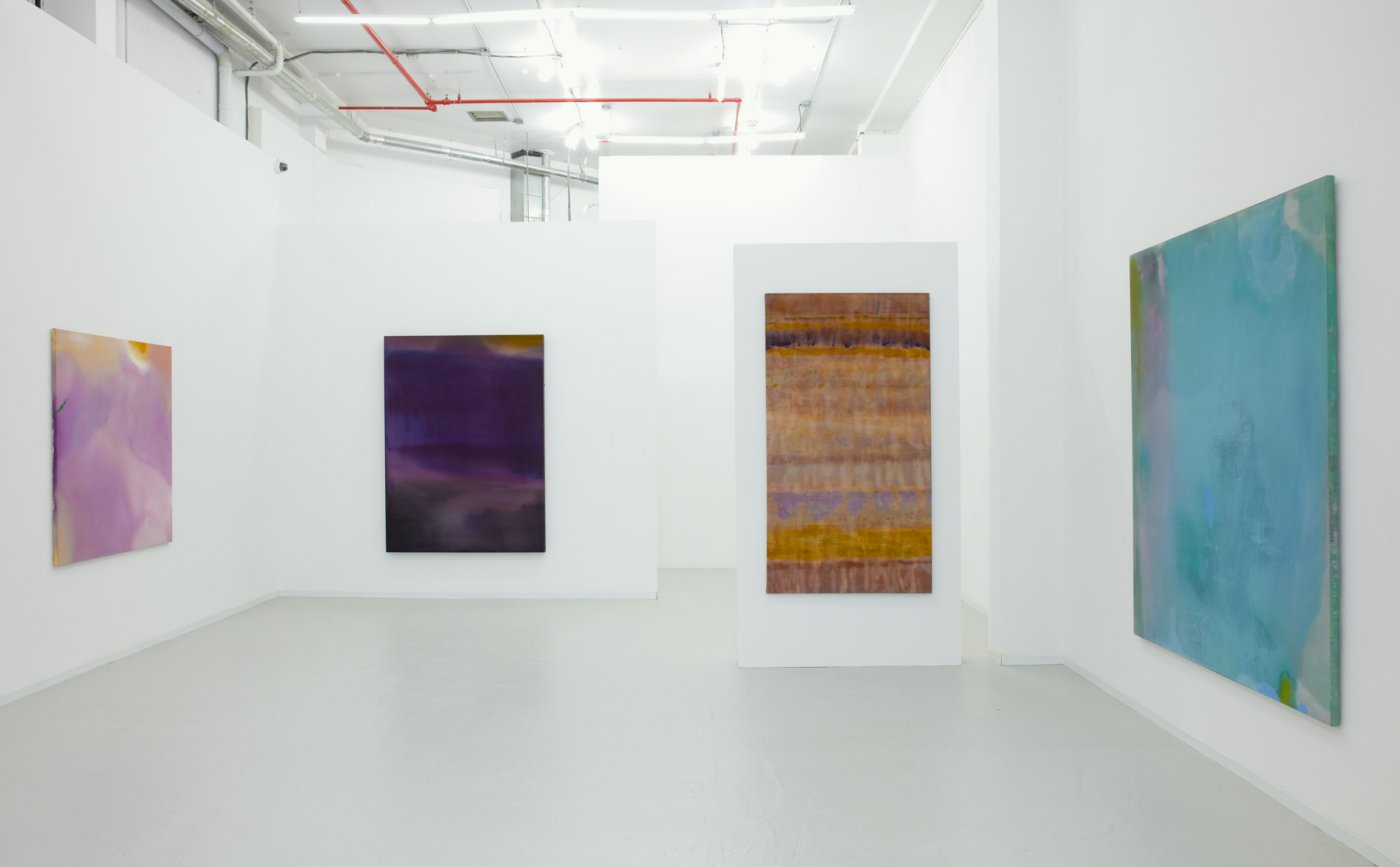 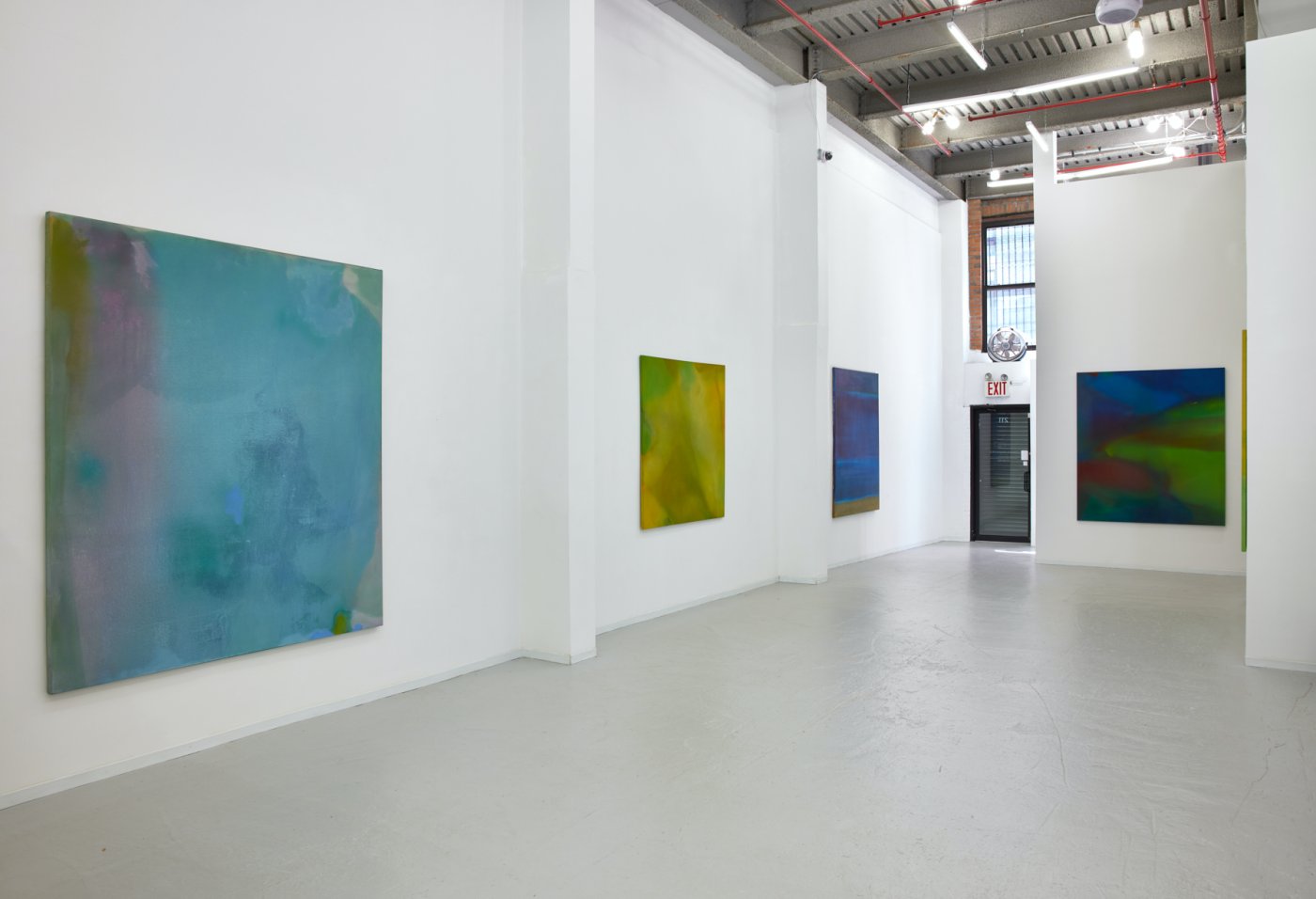 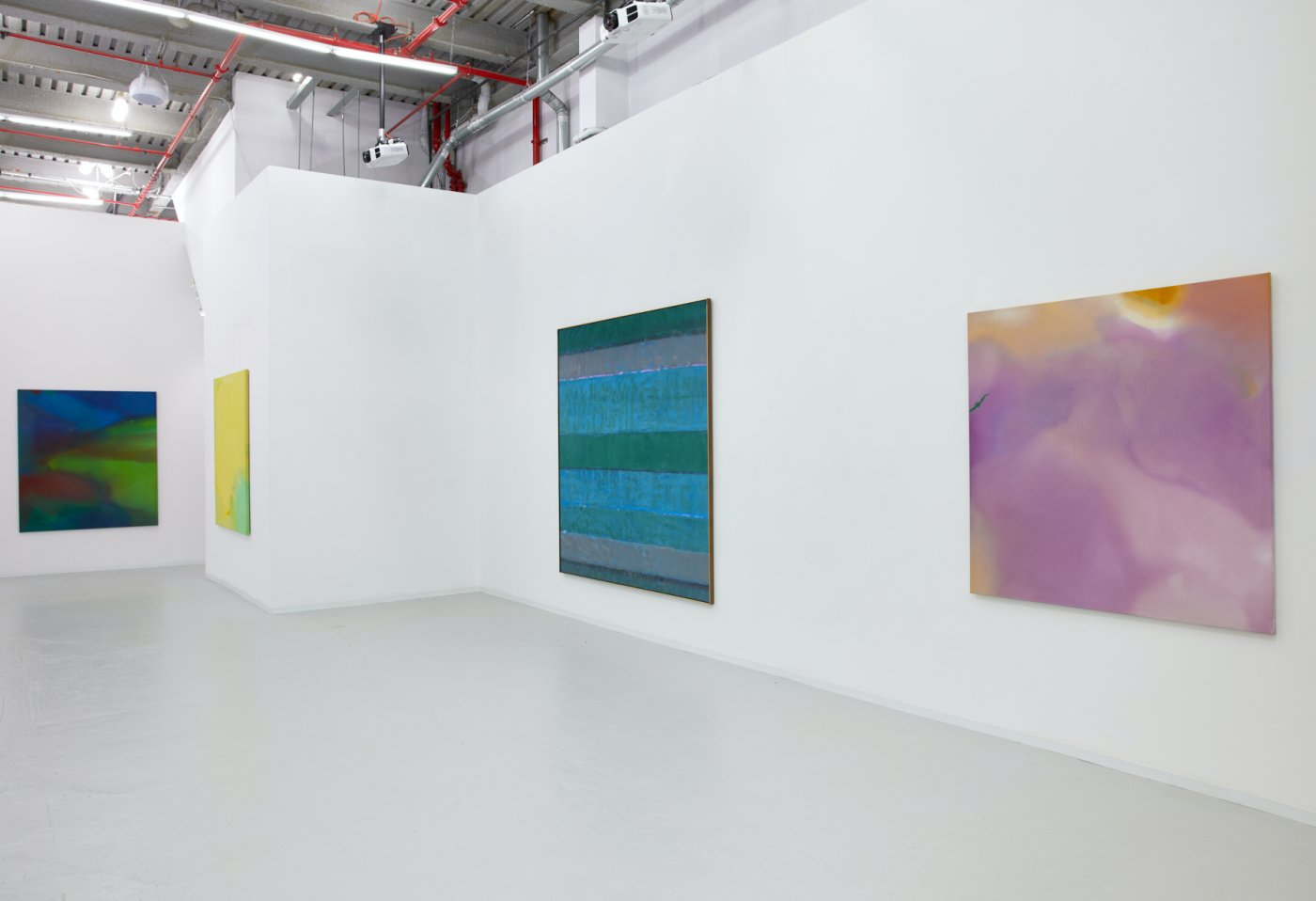 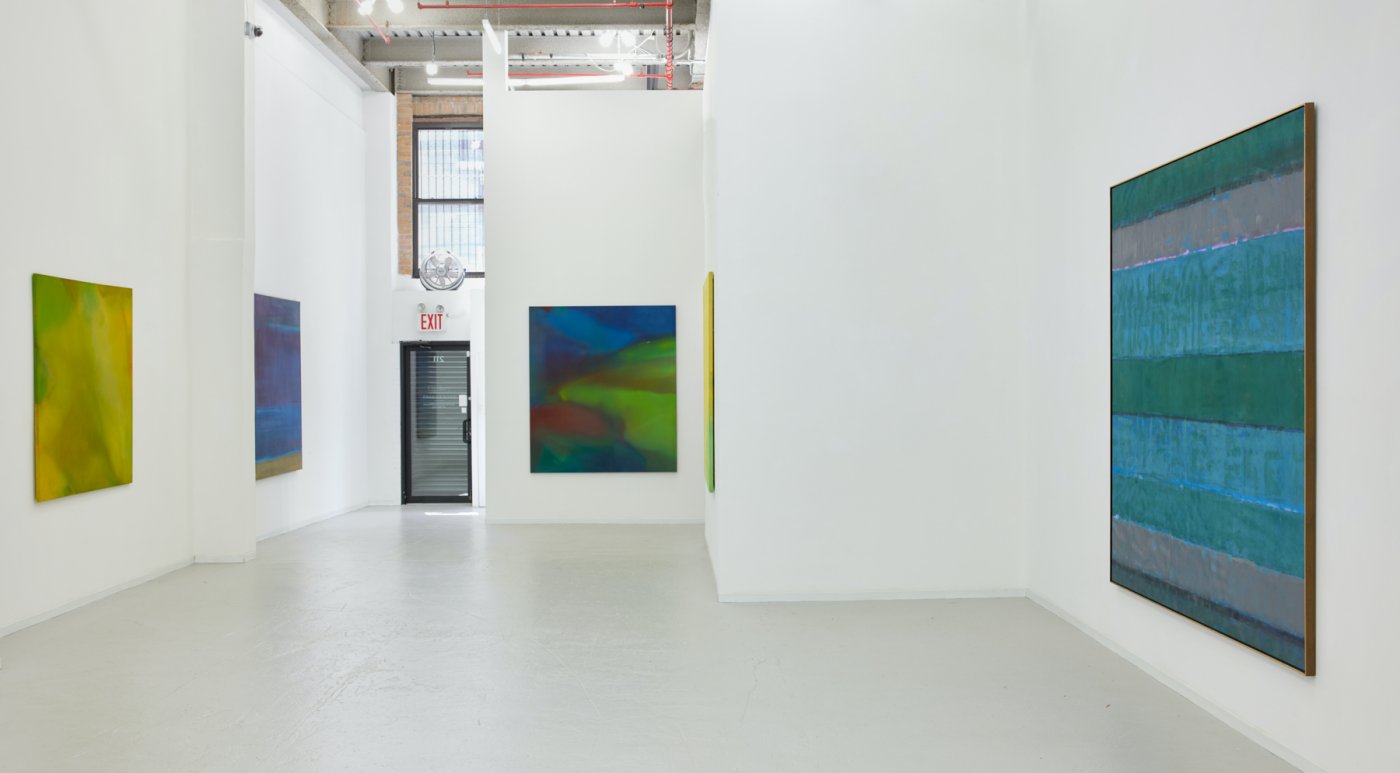 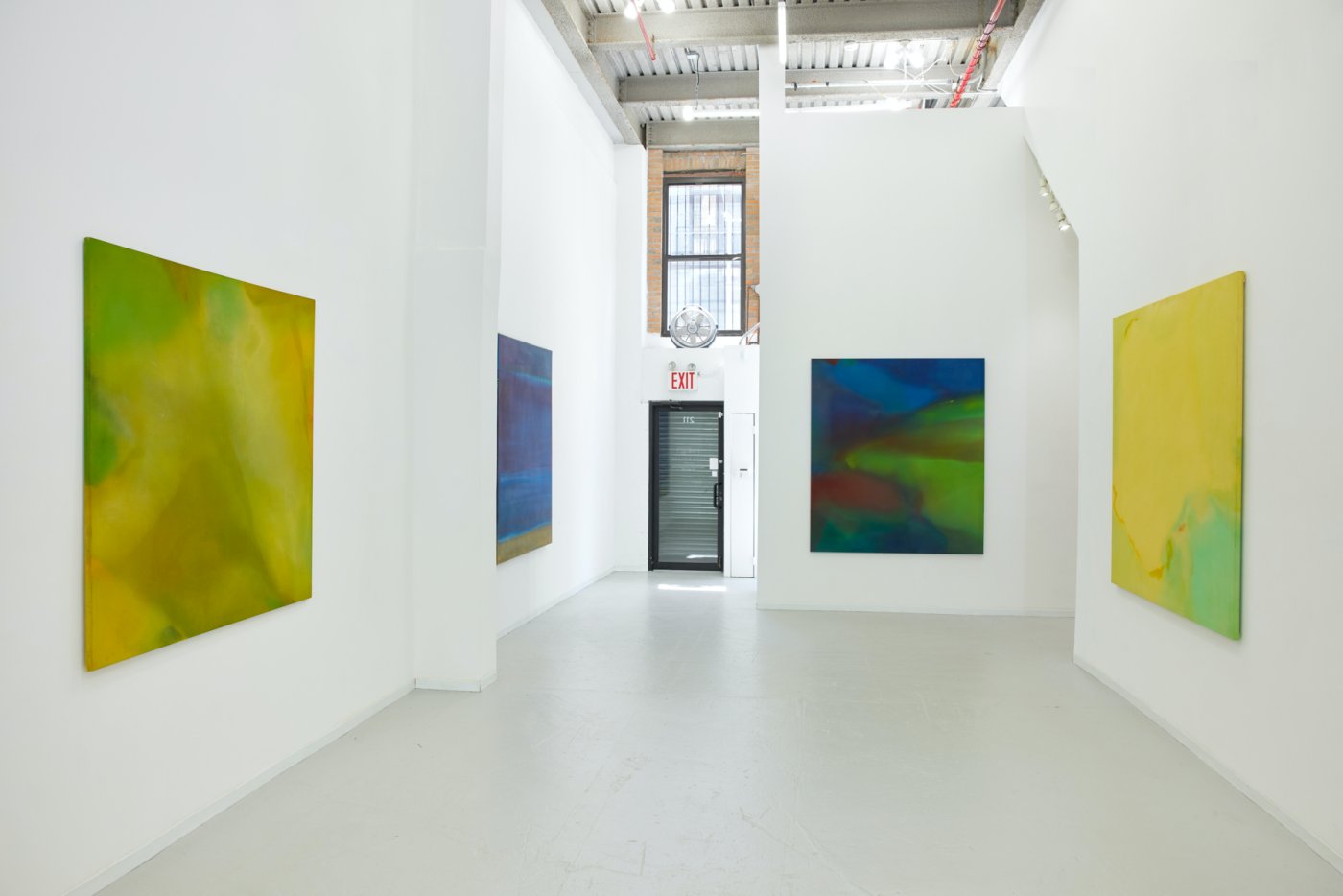 The presentation of 13 paintings from 1968 to 1976 covers a seminal period in the artist’s career. De Looper (1932, The Hague, Netherlands – 2009, Washington, D.C.) maintained his focus on formal concerns using a process driven approach that yielded numerous color-based abstractions during these decades. The big shift during this period was his moving away from pouring and physically rolling and manipulating the paint on the canvas surface to bringing brushes and rollers into the process to guide the location, but not always the flow and final placement of the acrylic paint. Thus, the compositions transitioned from amorphous, billowy and free-flowing using mostly gravity and chance to drive his compositions to decidedly creating striated bands of color, often unbounded and melding from one to the other. The continued application of multiple thin layers of pigment and allowing underlayers and residue of previous passages to remain and peak through upper layers maintained a level of chance and surprise that was just as challenging to control and fresh to the artist as the tilting of the canvases and rolling the pigment in an attempt to guide the outcome.

Willem de Looper loved color and the act of painting, especially watching the pigment perform in unique and interesting ways with the surface of the canvas or on a primed support, the interaction between colors, the emergence of a new hue through working wet-on-wet, the process of creating luminous or flat or textured surfaces. Each act became an independent experiment that yielded its own empirical result. The culmination of those acts resulted in explorations of color that produced glorious and unique abstractions.

The period from the late 1960s and into the 1970s was a pivotal and important period for de Looper. It not only marked a transition from one decade to another, but also a fundamental shift in his process while steadfastly maintaining his formalist concerns of color, color interactions, luminosity and the interaction of the surface with light in his paintings. The move away from his initial desire to rid paintings of the artist’s hand—achieving pure abstractions through non-traditional methods of applying and moving pigment across the canvas and letting experimentation and serendipity guide his compositions—to later, bringing structure (albeit loose initially) into his paintings with the composition driving choices and using traditional artist tools to direct the paint. Enough spontaneity remained in his process to produce a suitable number of happy accidents and aesthetic surprises, which delighted de Looper and kept the new body of work engaging and robust, while also spawning new possible references and revealing latent influences and interests.

Washington, D.C was a vibrant place during the 60s and 70s and de Looper’s peers included many notable locals and members of the Washington Color School, including Kenneth Noland, Thomas Downing and Gene Davis as well as many other influential color painters in Washington, D.C, in the 1960s, 70s and 80s, such as Sam Gilliam, Anne Truitt and Leon Berkowitz, among others. Interestingly, de Looper’s career is similar in many ways to that of Kenneth Victor Young. Young started on a more technical and scientific path in his initial studies. However, he was enthralled with painting and chose instead to pursue an artistic career. Upon his arrival in Washington, D.C., Young took a day job with the Smithsonian Institute to design exhibitions for 35 years, leaving his spare time for his artistic endeavors. De Looper, the son of a Dutch banker in The Hague, initially studied economics when he began studies in 1953 at the American University. However, he also took art classes and decided instead to pursue an art career. After leaving the army, de Looper took a job in 1959 at the Phillips Gallery (now, the Phillips Collection), where he worked his way up the ranks from security guard to curator and retired in 1987 and when he was not curating exhibitions, he was busy painting and exhibiting his own artworks.

About the Paintings in the Exhibition:

De Looper’s paintings from the 1960s were classic ethereal and stained Color Field paintings made with dilute paint poured, rolled and sponged across the canvases. Focusing on formal concerns, mixing color on the surfaces to generate color-based abstractions and leveraging process that minimized the artist’s control, all yielded the potential for more episodic, yet revelatory outcomes. Responding intuitively and quickly to such results produced unanticipated shapes and gave his paintings an organic feel that kept them alive and vibrant, and opened them to broader interpretation. Perhaps subliminal, but color choices were likely inspired by looking deeply into the velvety corollas and saturated colors of flowers or viewing lush, dense flower gardens from a distance where the colors meld one to the other. Some of the paintings are primarily shades of blue, lavender and purple, created by layering dilute paint such that they read atmospheric with tremendous depth, possibly inspired by landscapes, seascapes and cloudscapes from his European roots growing up in Holland, or perhaps the influence of the ever-present Delft blue porcelains. Still other paintings with narrow, horizontal shapes and ethereal grounds of melding colors splashed with flecks and drips of paint are evocative of celestial skies and stars.

In the 1970s, there was a notable shift in De Looper’s paintings to more horizontally striated bands of colors and textured surfaces on a variety of square as well as horizontally and vertically oriented canvases. The artist brought brushes back and added the roller to his repertoire of methods for applying and distributing pigment on the surfaces of his canvases. These paintings, while still ethereal with layers of translucent colors and the same luminosity and radiance as the paintings from the 1960s, the somewhat distinct bands of hues suggest or reference landscapes with a deconstructed approach, breaking the landscape components into discrete strata comprising the sea, land and sky. This perception is largely due to a greater use of hues of blue, purple, amber, ocher and brown, which inherently read as landscape colors. Again, this new approach also brought a painterly European sensibility to De Looper’s creations and abstractions with historical influences of Dutch painting and colors. This landscape perception could also be assisted by De Looper’s own statement, “Although my paintings are a distillation of nature, they are as abstract as music.” However, the artist maintained that the use of striations in the 1970s were not intended to represent landscapes. Instead, the striations came entirely out of his formalist concerns and desire to use the banding as a structural device to further his explorations of space and depth in painting through color as though he were picturing light. As noted, light and the interplay with color as affected by the texture of the surface of the painting support was another formal aspect of his work in pursuit of non-objective painting.

De Looper did not work from sketches, his compositions were not predetermined. Instead, he relied on his process and worked in an improvisational and intuitive manner—as inspired by jazz musicians. The first color, the first pour or the first stroke determined the next, and then the next, and so on and so on. His process was to let the painting with its colors and their blending on the surface—both the colors that remained from the last pour or stroke and the new ones that emerged from the most recent application of pigment—determine the next hue to be layered on top and ultimately, the final composition. This approach gave his paintings that lush, organic sensibility that made them not only more accessible, but current and of the moment. Even 40 and 50 years later, his paintings from this critical period are just as contemporary and vibrant as they day they were made.

Not only were De Looper’s paintings inspired or influenced by his interest in the natural world, but also by jazz and classical music, travel and experiencing different cultures. While his titles might have been of a specific person, place or event, the imagery was always abstract and rooted in his formal concerns of color, line and composition and ultimately created through his steady and thoughtful process. De Looper’s titles for his paintings were also spontaneous and inspired by the final composition, not the other way around. In keeping with the principles of non-objective painting, the title is not the subject nor inspiration for the painted creation, but the name given to the painting after the fact (or performative act).

Willem de Looper was born and raised in the Netherlands. Always influenced by American culture, he moved to the US in the 1950s and followed his brother to Washington, D.C. where he studied art at the American University. He had a lengthy career at the Phillips Collection from 1959 through 1987 when he retired as the chief curator. While working at the Phillips Collection he pursued a vigorous and productive painting career in parallel with steady representation by notable Washington, D.C. galleries, including: Jefferson Place Gallery, Max Protech Gallery, B.R. Kornblatt Gallery and Troyer Fitzpatrick Lassman Gallery. De Looper’s artworks have been exhibited nationally and internationally in New York, Chicago, Los Angeles, Palm Beach, Pittsburgh, St. Louis, Kansas City, Augusta, GA as well as Paris, France and Hamburg, Germany. His artworks have been exhibited in several museums in the Washington, D.C. area, including: the Corcoran Gallery of Art, Hirshhorn Museum and Sculpture Garden, The Phillips Collection, and Baltimore Museum of Art. De Looper has had several retrospective exhibitions at the Federal Reserve in 1978, Maryland University Museum in 1996, the Phillips Collection in 2002 and the American University Museum in 2008.