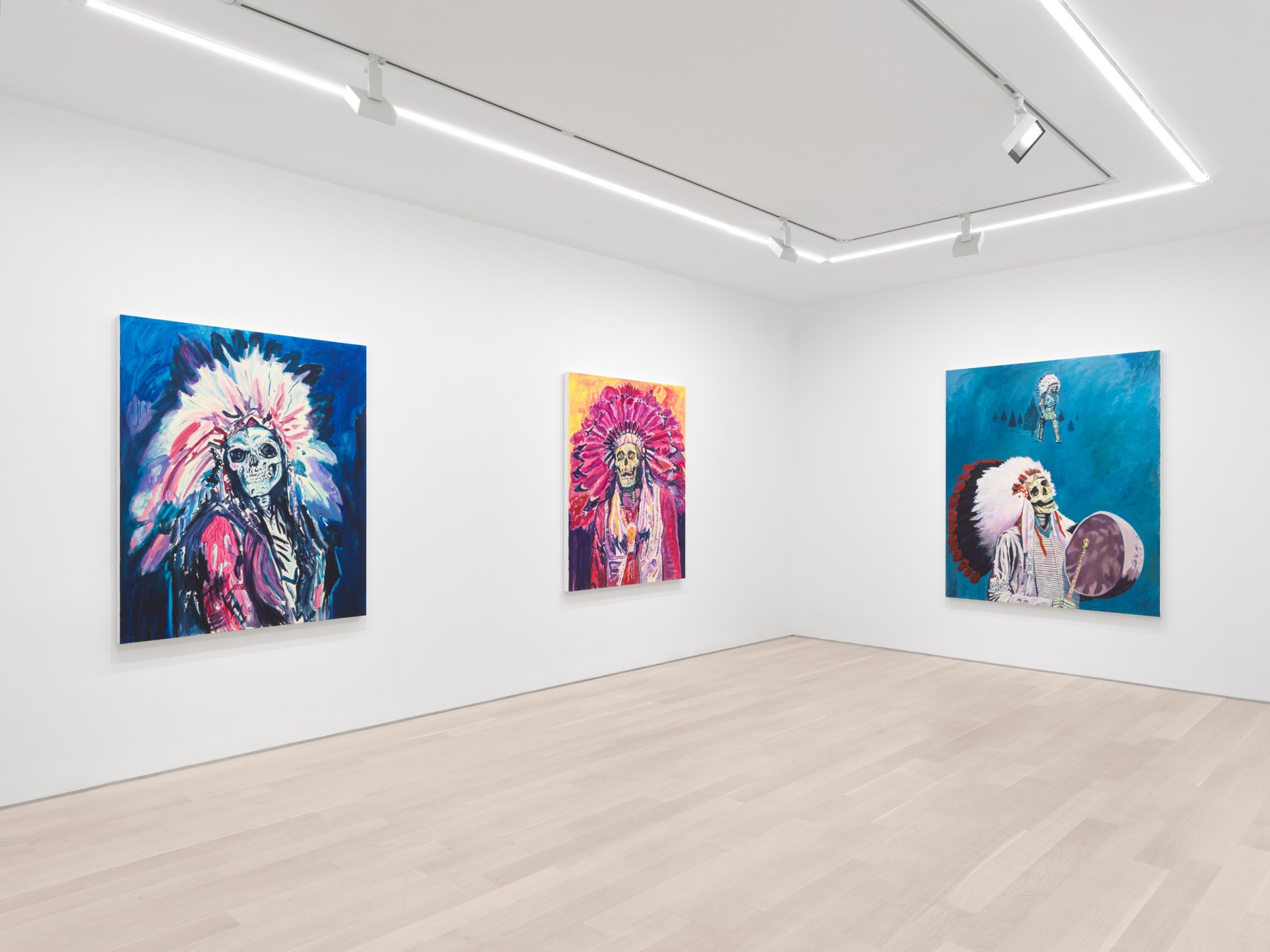 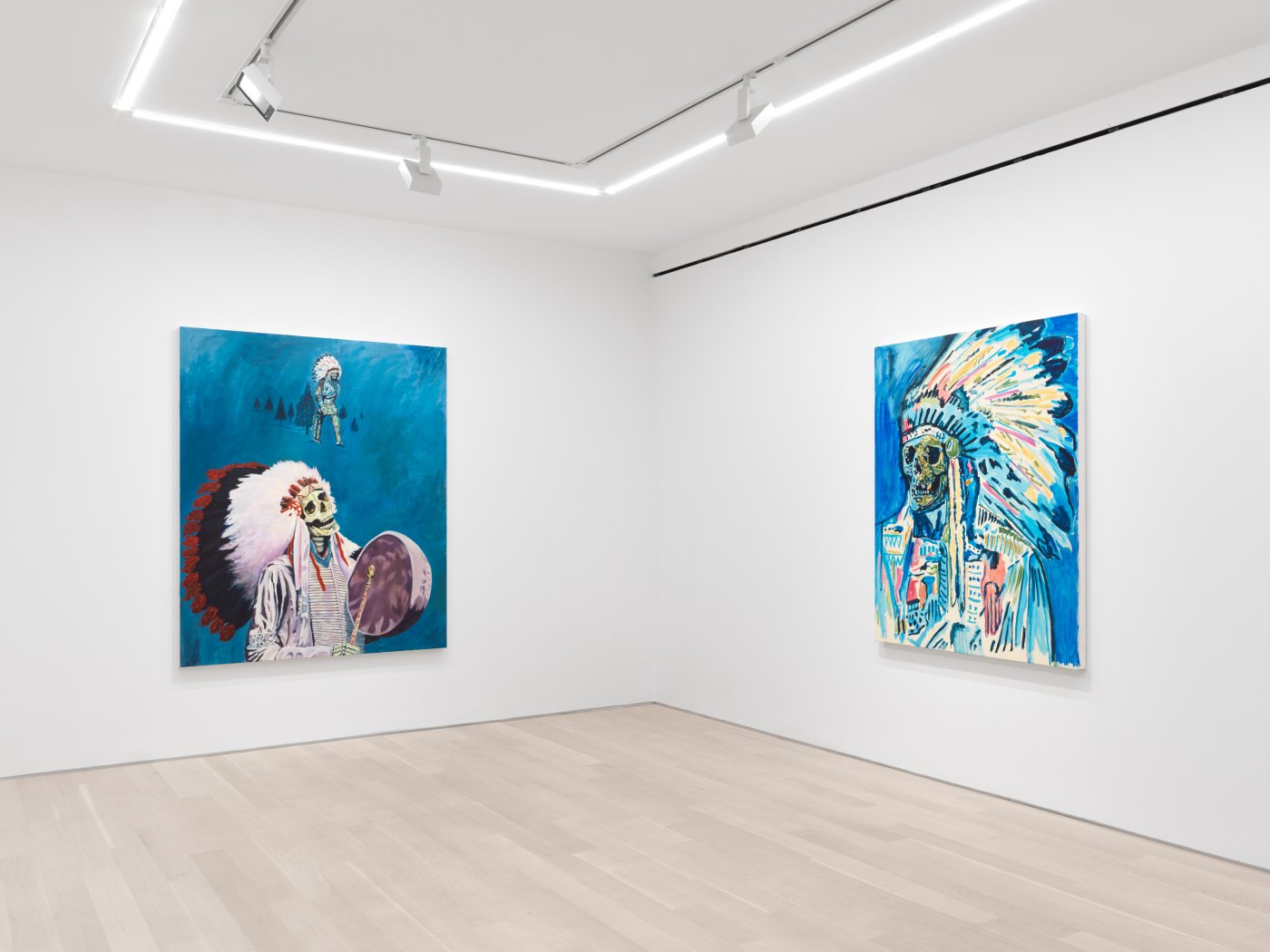 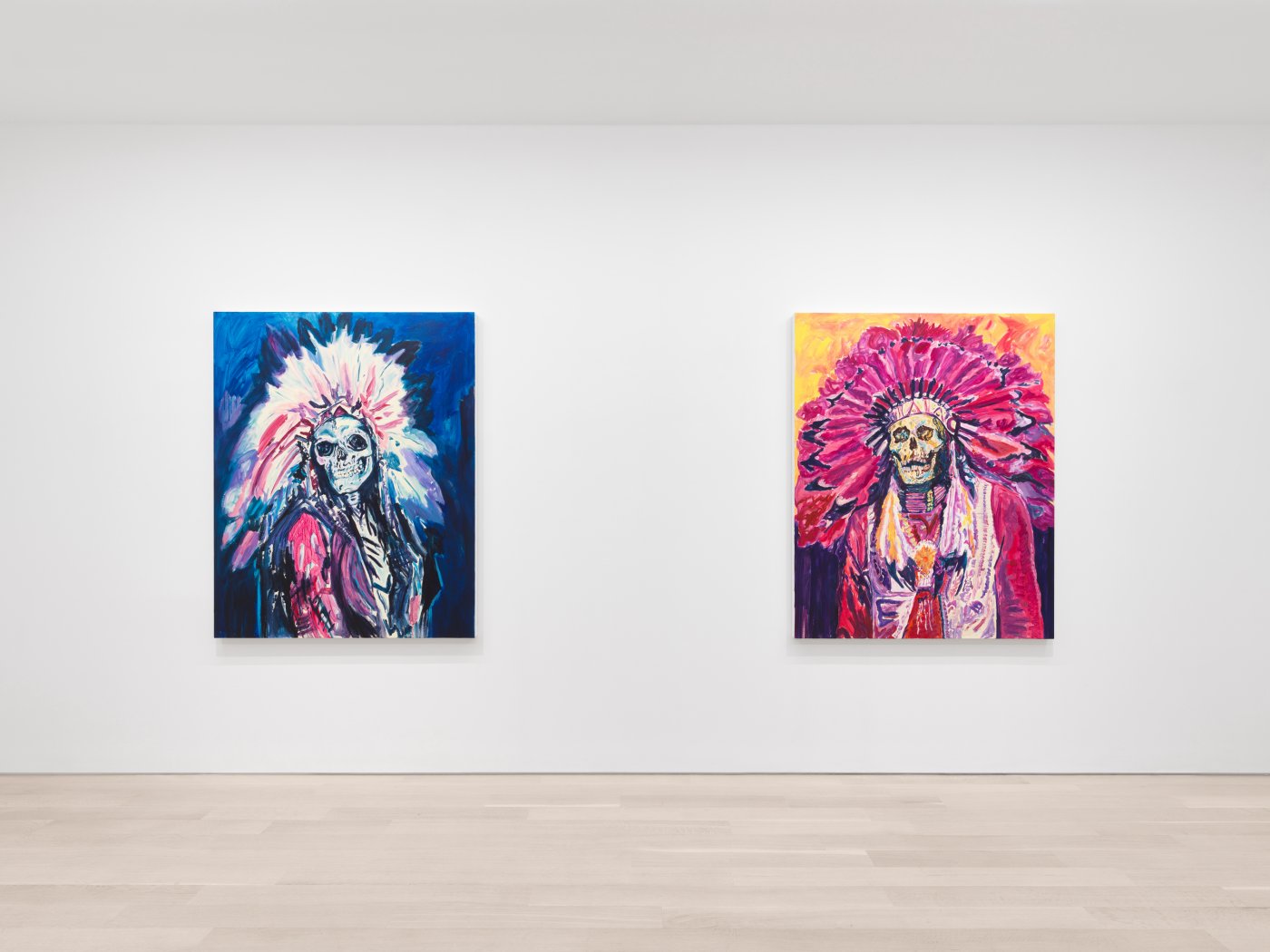 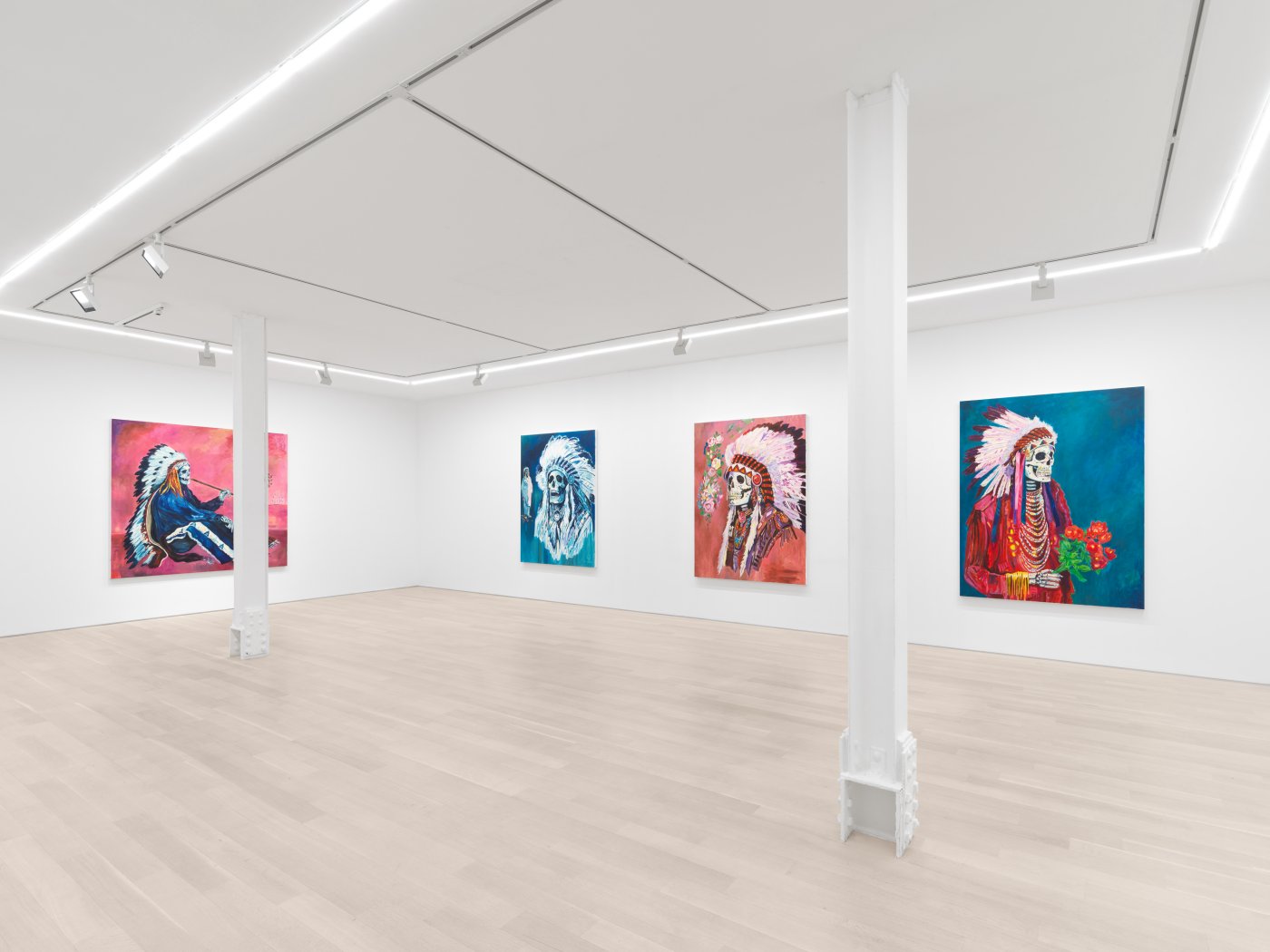 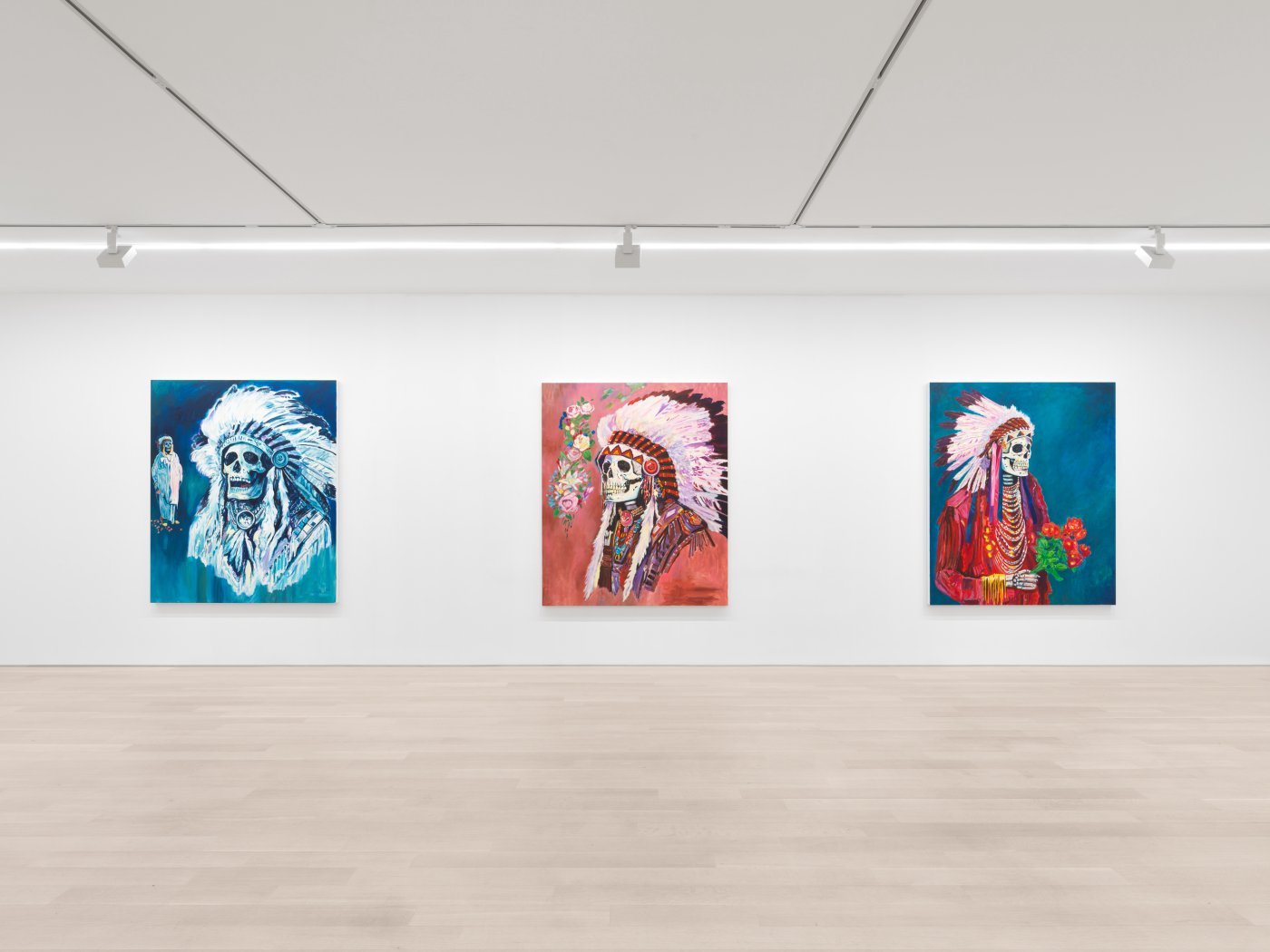 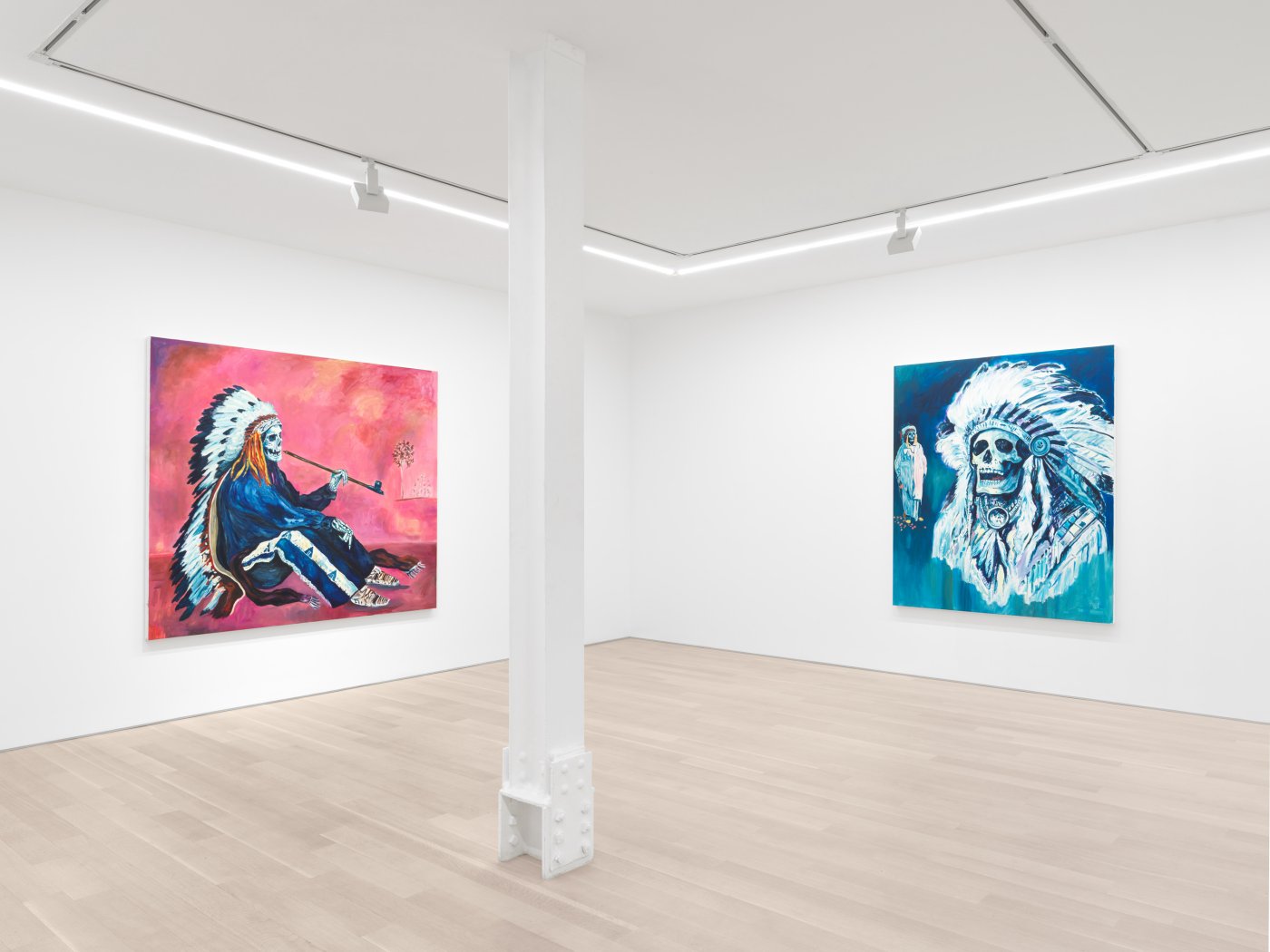 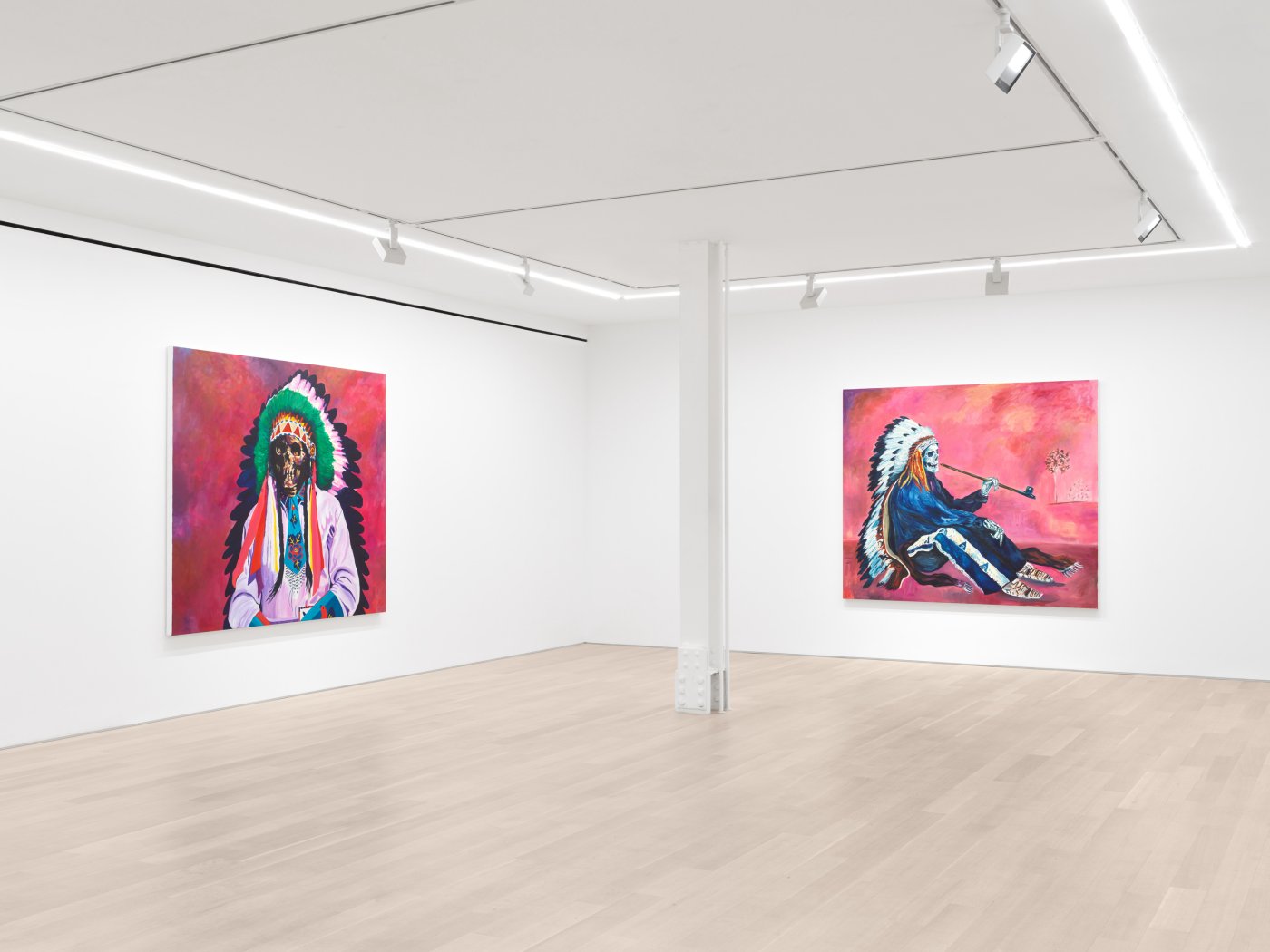 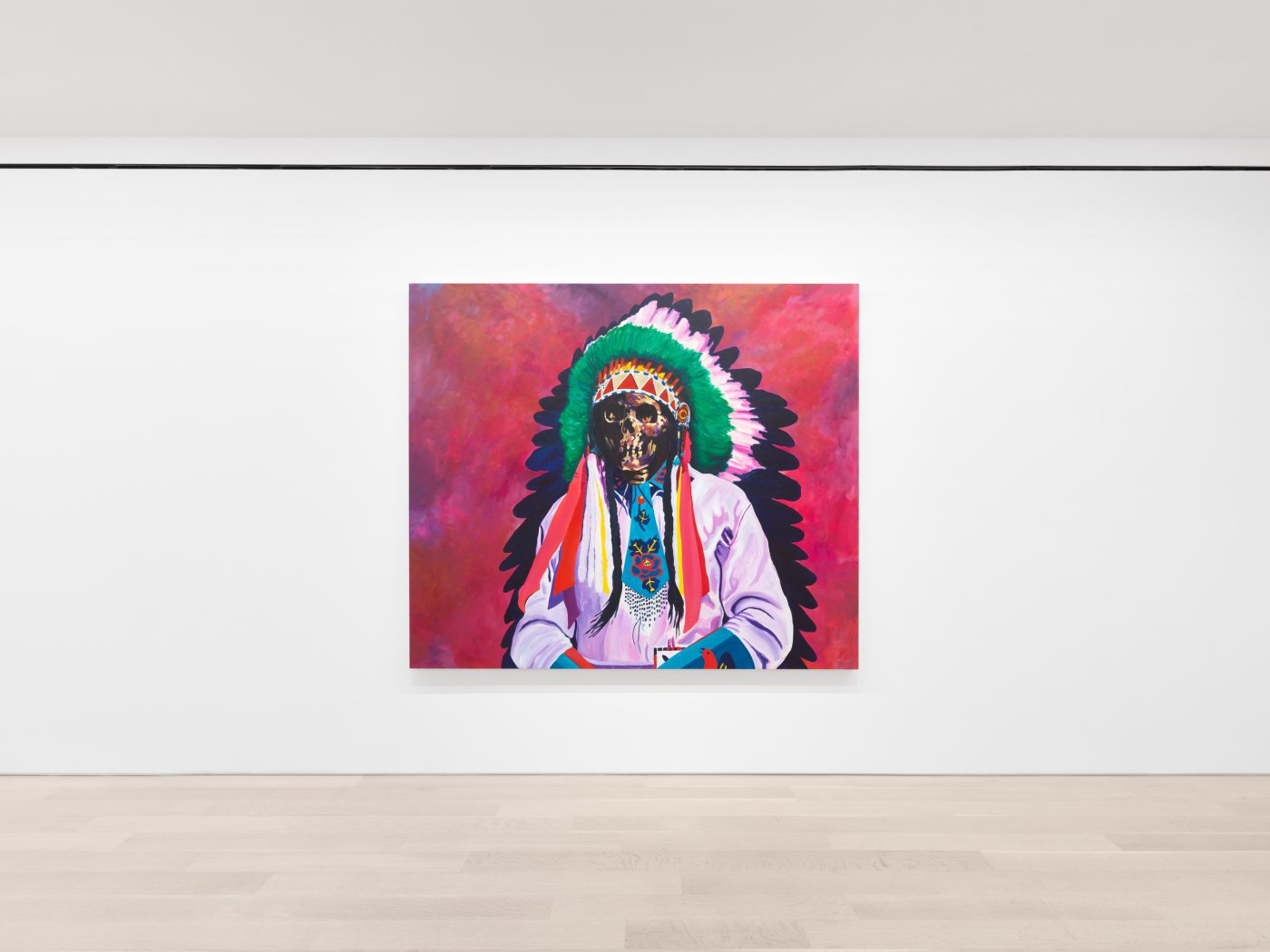 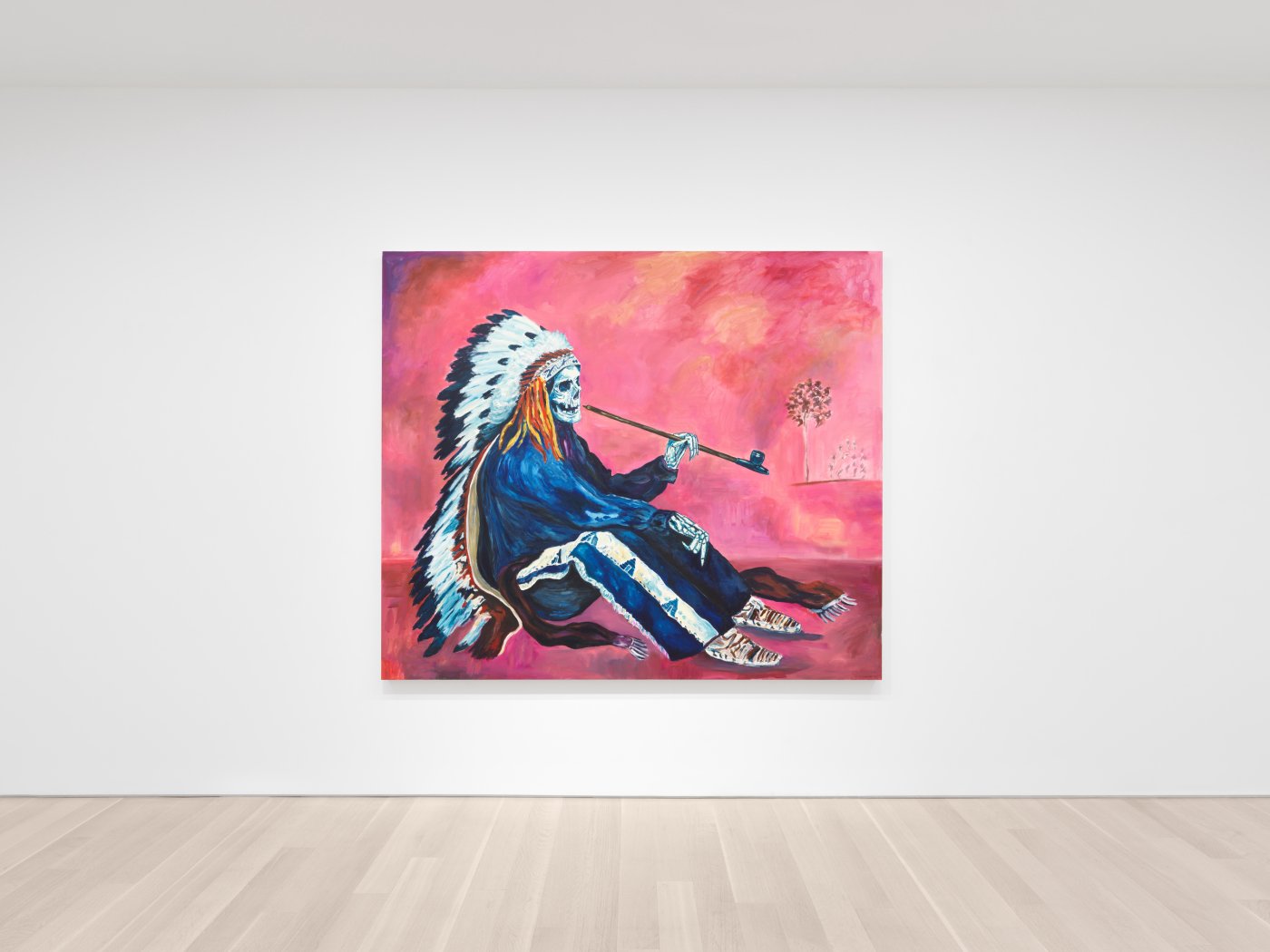 “The skull is always present because I’m obsessed with my own death,” says Wes Lang of the memento-mori like motif that has permeated his work since the 1970s when, in elementary school, he first developed a habitual tendency to doodle skulls. “I’m always thinking about death and trying to be accepting of it. I don’t want to paint myself , the skull is a stand in for that. I’ve got a skull, I just can’t see it.” And to clarify, this desire to mull on the temporal nature of life is not meant to inspire hopelessness but rather—like the monks who practice maranasati, or ‘death awareness’ —such contemplation aims to dissolve the ego’s stranglehold, filling life with abundance and gratitude. To Lang, it’s “a constant reminder to myself and the viewers to stay present and to do everything you possibly can to move your life forward in a positive direction while you’ve got the chance to do it,” he says. “It’s gone before you know it. It really is.”

The ten canvases in “Pink and Blue”—the title of which is a nod to Picasso’s early Blue and Rose period paintings, often seen as his most personal work—were painted this Fall amidst several substantial moments in the artist’s life, including his wedding, a nasty bout of Covid, and a major move. “These paintings are kind of veiled representations of the various states of psychosis and joy that I went through over the last several months,” he says, “I had really bad brain fog which led to a weird anxiety that lasted several weeks on end.But I had to make this show. I had to paint myself through it all.” Some works explicitly explore moments from this period—Purple Dawn is a representation of the brain fog sensation, which left Lang feeling “outside of myself, like my brain was floating around and causing horrible feelings,” ; I’m Glad There is You, named for the jazz standard, stands in for the artist looking proud on his wedding day.

While the paintings in his prior show saw the canvases heavily worked and reworked, those on view in “Pink and Blue” were executed quickly and confidently, often with thinned paint and moments of raw canvas poking through. “That’s something that I’ve always wanted to be able to do,” Lang says of this body of work. “There are brush strokes here I’ve been trying my whole life to get.”

Like the skull, the recurring Native American figure also serves to look—as if from a bird’s eye view of linear time—at Lang’s life from childhood, to the present, to the future. As a young boy he would visit a Native American Reservation on Long Island and today it’s a deep reverence for the culture’s spiritual practices that keeps him returning to the figure. This exploration into the subjectivity of time is of particular interest for Lang, who has been “obsessed with time” ever since finding a lost Timex in the dirt while rolling down a hill as in elementary school. “I want what I’ve been spending my time on to last,” he says. “I grew up around a lot of guys that became very well-known very young, and it didn’t necessarily work out for them. I don’t want to be that type of artist; I want to be an artist that gets to work for a really long time and who gets better and better and better. I want to leave behind great things that people want to spend time with and talk about. I won’t know, because I won’t be here, but I’m trying to put the building blocks in place while I can.”

Courtesy of the artist and Almine Rech, New York