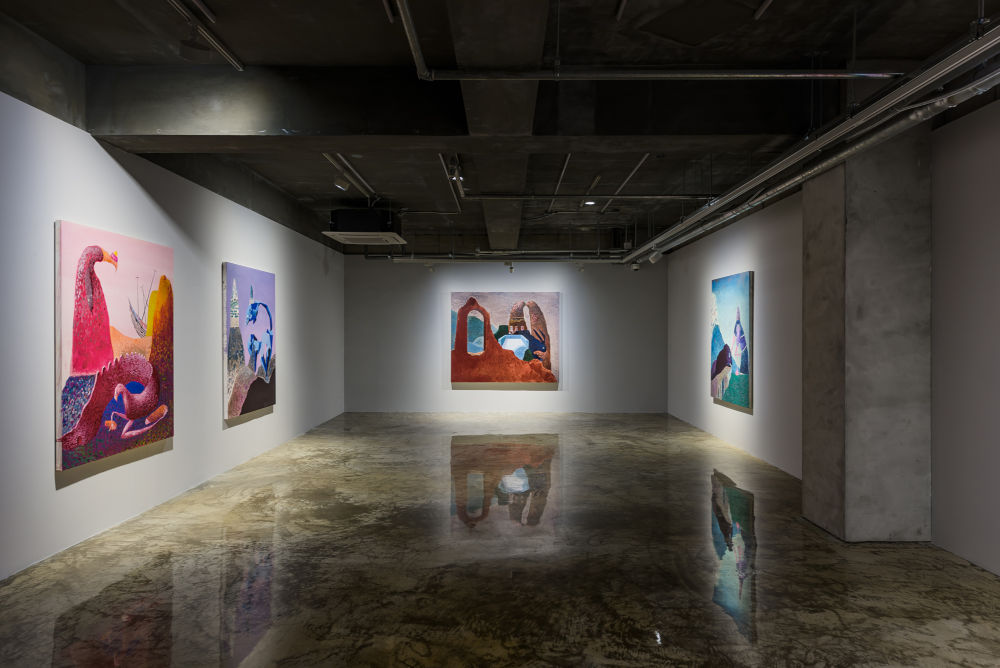 One of the most important contemporary artists in the Middle East, Shawky has presented works with narratives where fact and fiction intermingle through a variety of media including drawings, paintings, and installations, with a focus on films. Reinterpreting existing historical narratives, the artist has addressed concepts regarding artistic, religious, and transnational identities based on extensive research and investigation on history and mythology.

Along with the film Al Araba Al Madfuna III, this exhibition showcases Shawky’s latest drawings and paintings. A trilogy, Al Araba Al Madfuna is a film inspired by the artist’s visit to Al Araba Al Madfuna, a town that possesses ancient ruins and used to be the capital of a dynasty in Upper (southern) Egypt. Having witnessed the locals dig the ground in search of hidden treasures and seek to unearth their ancestors’ secrets through alchemy and spiritual activities, Shawky overlays this mysterious experience with the contents of “Sunflowers” from Tales from Dayrut, a short story collection by Egyptian prose fiction writer Mohamed Mustagab, to reconstruct the narrative as a dreamlike film.

Shawky’s films turn a broad range of themes and abstruse issues into fascinating epic poems. In addition to providing profound reflections on history and tradition, the lyrical visual language that he uses serves to translate the history of the Arabs and the Middle East, which have become fixed through a Western perspective, into contemporary narratives. However, the message conveyed by the artist is not based on a perspective biased toward any one world but points in the direction of healing that encompasses both worlds. Requiems that console the present through his works, narratives of historical contradictions and pain are prayers wishing for a new beginning for the human race in the present and the future alike and have the power of declarations.

Through the history of the Middle East and the mysterious tales originating from the region, Shawky has posed sharp questions regarding existing historical descriptions and continued provocative explorations. Such action on the artist’s part prepares a new path for overcoming national and regional boundaries and identities, which contemporary art has ceaselessly challenged, and creates room for imagining stories after that transcendence.

Wael Shawky was born in 1971 in Alexandria, Egypt. Currently, he divides his time between his hometown and Philadelphia. His major recent solo exhibitions have been held at venues including the Castello di Rivoli (2016) and the Fondazione Merz (2016), both in Turin, MoMA PS1 in New York City (2015), Serpentine Galleries in London (2013-14), and KW Institute for Contemporary Art (2012). His major recent group exhibitions include the 14th/9th Istanbul Biennial (2015, 2005), 11th Sharjah Biennial (2013), 13th documenta (Kassel; 2012), 9th Gwangju Biennale (2012), and 50th Venice Biennale (2003). Since 2015, Shawky has established MASS Alexandria, an educational program, in his hometown and provided support to young artists in the area.

1) Al Araba Al Madfuna III
Based on Mohamed Mustagab’s short story “Sunflowers,” Al Araba Al Madfuna III consists of the colors of film negatives. Leading viewers into pharaonic remains, the film presents unfamiliar and bizarre images, as if exploring the relics of a long- forgotten alien civilization. The night sky is represented as a blind, white blank, and the stars are represented as little black dots. Young boys look like numerous ghosts floating across the horizon, and their torches seem to absorb the light around shining nebulas. When the point of view leads viewers down into the tomb, the interior is surrounded by fluorescent sculptures, whose gleaming bodies are covered with the profiles of gods and pharaohs carved thousands of years ago. In this scene, some of the children cook food. Others create pottery. At times, they go through swamps by the Nile River and rock cliffs in the surrounding valley. Amidst experiences of such bizarre, hallucinatory scenery, Mustagab’s story continues.

3) “Sunflowers” (2008)
“Sunflowers” recounts changes to and the downfall of a village due to changes in the residents’ attitudes toward the usage of bizarre sunflower seeds. In this tale, sunflowers, which at one time are mere byproducts of the villagers’ farming, unexpectedly start to wield considerable influence on the community and kill other crops, thus spelling disaster for the village in the end. What at first seemed to be the objects of a chance hobby and a symbol of wealth at last reveal themselves to be the power of catastrophes and ruination, the community is torn asunder, and only a forgotten story remains.

In the film Al Araba Al Madfuna III, Shawky seeks to reveal the truth of a dystopian world through the story of a village from which tradition has disappeared. In other words, while communal spirit provides a basis for shared experiences, due to the rise of misunderstanding and indifference in the transmission process, such relations are damaged, thus leading to mutual constraint and collective disappearance in the end. This work was created as a historical aftermath of the Arab Spring and the Egyptian Revolution of 2011.