The gallery presents the first exhibition in London of Vincenzo Agnetti, one of the most significant and influential Italian conceptualists of the twentieth century. 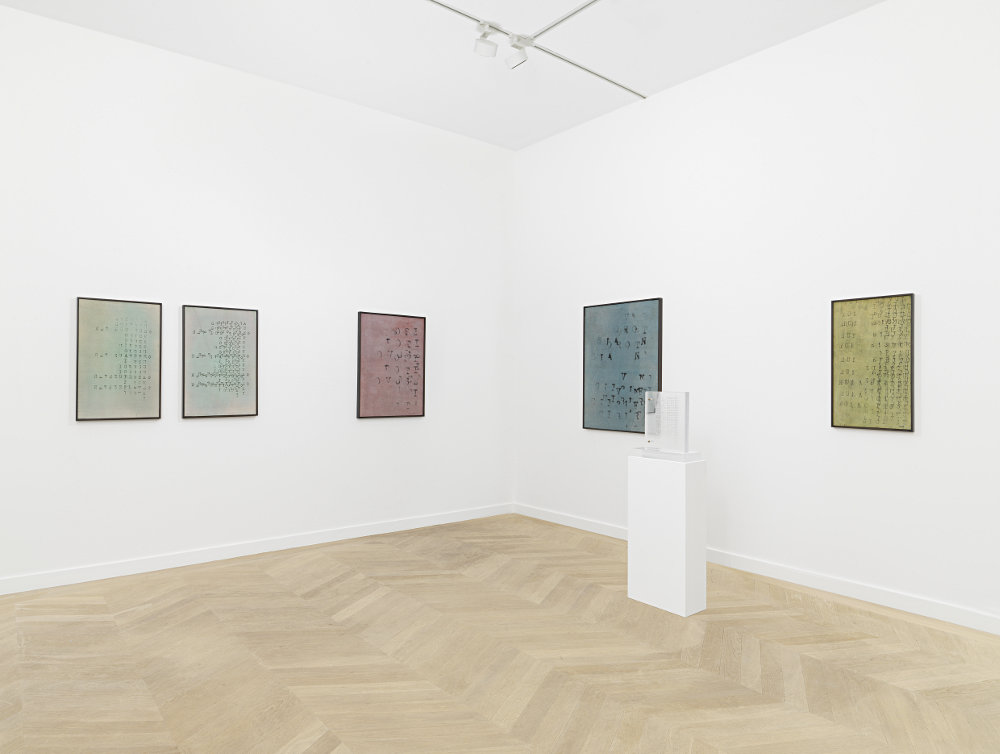 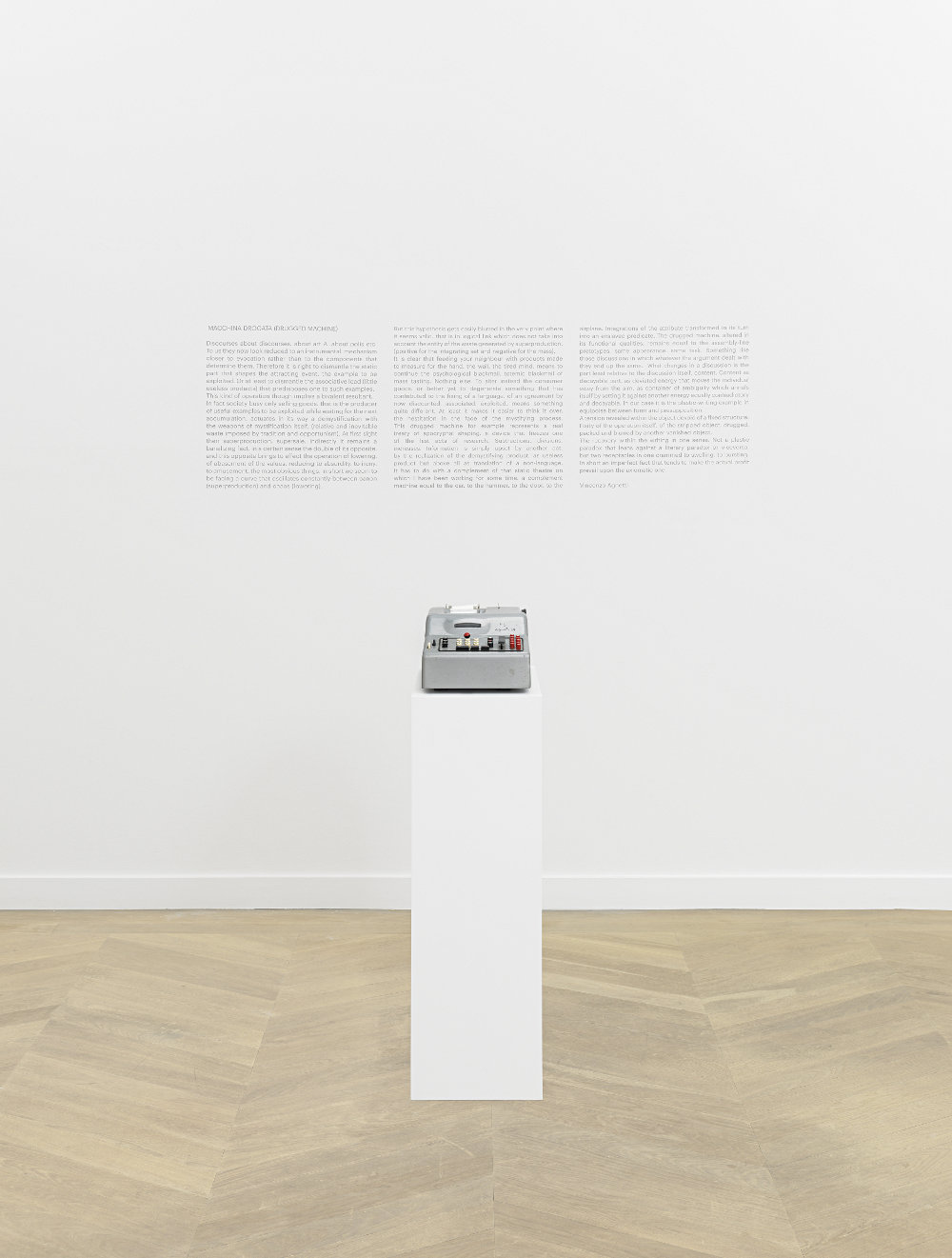 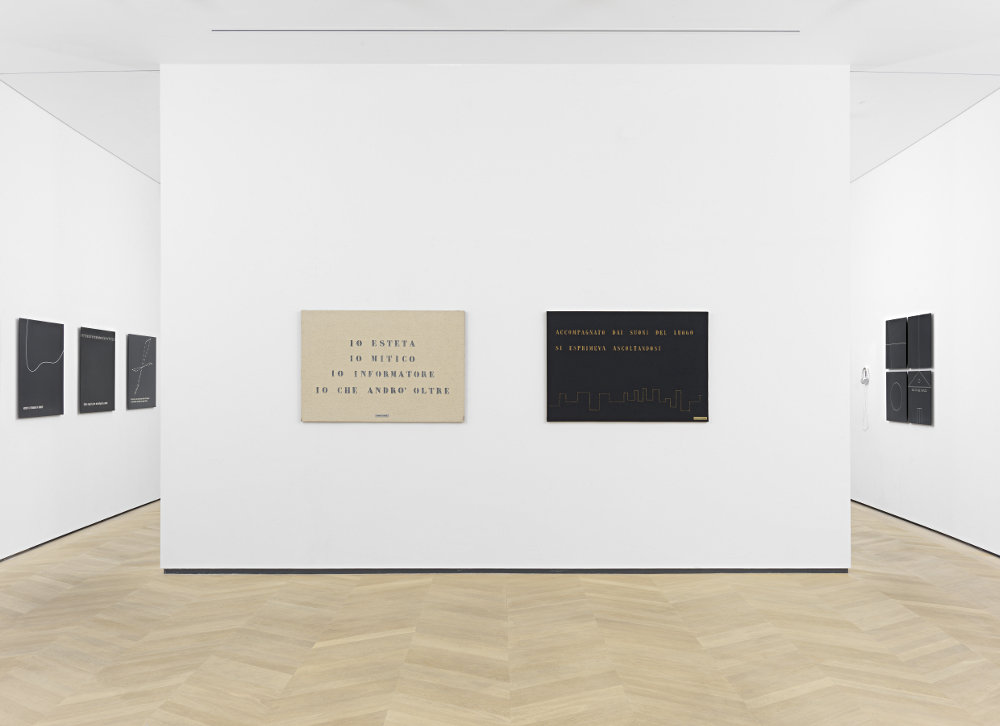 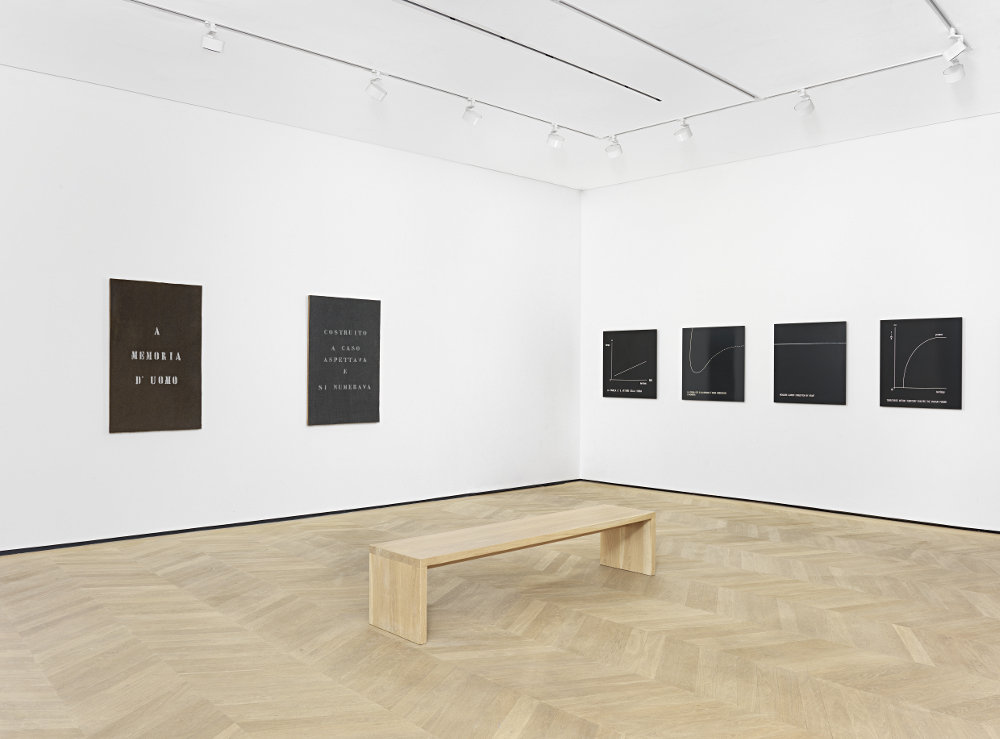 The exhibition focuses on three bodies of work from the artist’s diverse oeuvre—Axioms, Feltri (Felts), and Macchina Drogata (Drugged Machine)—which are key nodes of a sprawling practice that engaged the supple pliability of language with intensity and humor. Agnetti approached language as both content and material, depicting linguistic propositions and language-based abstractions with a signature esoteric streak. Seen as a whole, the artist’s work shed light on new possibilities for art’s engagement with philosophy and knowledge production: rather than illustrating theories and ideas, Agnetti sought to fully integrate idea and form.

As an artist and writer, Agnetti was an active participant in various Italian scenes from the 1950s through the 1970s. A friend and collaborator of Enrico Castellani and Piero Manzoni, Agnetti contributed criticism to the avant-garde journal Azimuth, which was dedicated to conceptual and formal developments of advanced artistic production. Agnetti’s own work traversed a wide formal range, but always with a rigor matched only by his curiosity. For Agnetti, the artist’s subjectivity was inextricably bound up with the artist’s output. Thus, in examining the depth and progression of Agnetti’s movement through various styles, this exhibition begins to map the intellectual progression of his artistic consciousness.

A student of poetry and art from a young age, the intellectual details of Agnetti’s early life remain opaque. In the artist’s words: “What I did, thought and heard, I’ve now forgotten by heart.” This deliberate occlusion of biographic information is characteristic of Agnetti’s use of language: shifting away from the personal toward a more remote philosophical terrain, Agnetti cultivated a mythic voice. Yet, definitive as these words appear, the epistemological framework is decidedly open: notions of “forgetting” suggest a break with inherited knowledge, experience, and trauma, and the evocative description of forgetting “by heart” (a phrase more commonly attached to the opposite of forgetting) invests Agnetti’s declarations with a sense of strenuous effort.

The poetic dimensions of Agnetti’s linguistic explorations are perhaps most evident in his Axioms (1968–1974). These square bakelite panels feature “axiomatic” observations, postulates, and formulas that are cloaked in the self-assurance of fact but are often cryptic, paradoxical, or tautological (“Dimension is the shifting of the mind”; “Territories within territory exalted the system power”). The works’ stylistic references emphasize this duplicity: their white text on black grounds is evocative of the blackboard, but the slick finish of their smooth surfaces and engraved words lends a permanent and fixed quality. Through this linguistic and formal play, Agnetti produces a slippage between proposition and truth, calling into question the way meaning is produced and comprehended.

The Feltri (Felts) also draw on familiar cultural forms, albeit more art-historical than pedagogical. Many of these works are titled “Paesaggio” (landscape) and “Ritratto” (portrait) but, like the Axioms, their main visual content is textual. The portraits and landscapes are aesthetically severe, with stenciled letters burned or painted on a humble felt surface. In many of the Feltri, this visual economy is enriched by sensuous descriptions. Ritratto di Donna (portrait of a woman), a 1974 dark grey felt panel, features red capital letters reading “Ignara e avvolta da un mistero falsificato” (She appeared unaware and surrounded by a forged mystery). The Feltri landscapes put forth more spare and open-ended provocations, as in Paesaggio, a 1971 dusky chartreuse felt with a circular chip missing from a top corner, its surface stenciled with the word “TERRITORY” (the equation of landscape and territory being a formulation more complicated and problematic than it seems at first blush). Theoretical and geopolitical conceptions of space constitute another significant concern for Agnetti, as this work boldly indicates. Along these lines, a 1972 beige felt panel bears two- and three-letter country abbreviations; its title, Quasi dimenticato a memoria (Almost forgotten by heart), is a favorite phrase of Agnetti that takes on a particularly deep resonance in conjunction with the work’s content and contemporary crises having to do with borders and nationalist sentiments.

The final body of work featured in the exhibition is the Macchina Drogata (Drugged Machine), a device Agnetti created, and a series of photographic enlargements that he made using it. This large Olivetti Divisumma 14 calculator was modified so that its numeric keys were connected with alphabetic type bars, retaining an essential logic but divorcing the machine from practical use. The words that the machine generated evoke a sort of nonsensical concrete poetry that approaches abstraction. Selections from its output were enlarged and printed on canvas, rendered in a range of colors and compositions. These products of the Macchina Drogata could be understood as an apex of Agnetti’s work with language, in which linguistic forms finally transcend the power structures that saturate the written and spoken word.