Tornabuoni Art presents a project by the Archivio Vincenzo Agnetti and Associazione Archivio Paolo Scheggi, curated by Ilaria Bignotti, Bruno Corà and the artists’ families, in collaboration with the Istituto Centrale per la Grafica, Rome. The Temple. The Birth of Eidos was shown for the first time at the Museo del Novecento in Milan from September 2021 to March 2022 and will be recomposed in the same form by Tornabuoni Art in its Parisian gallery. 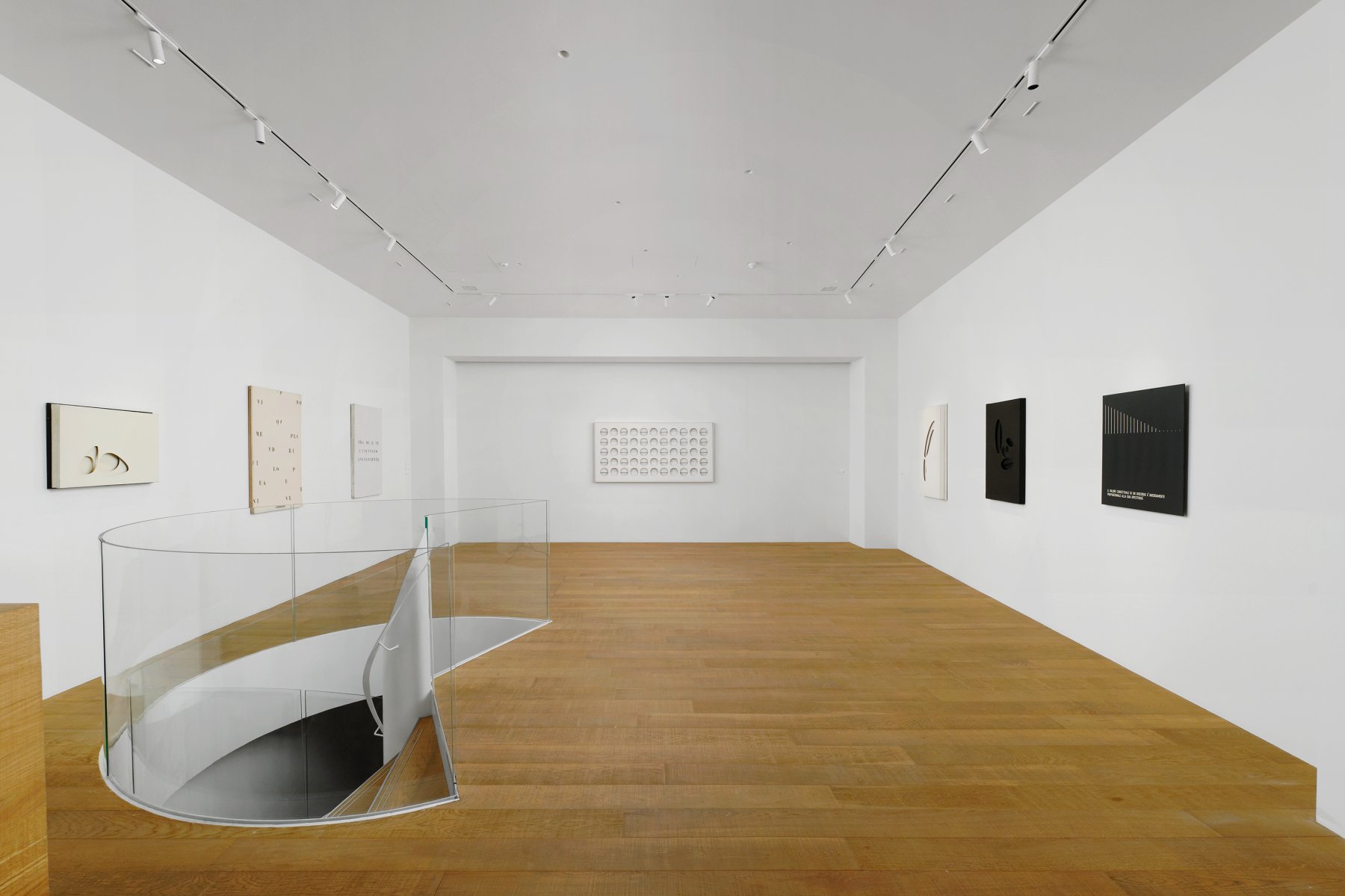 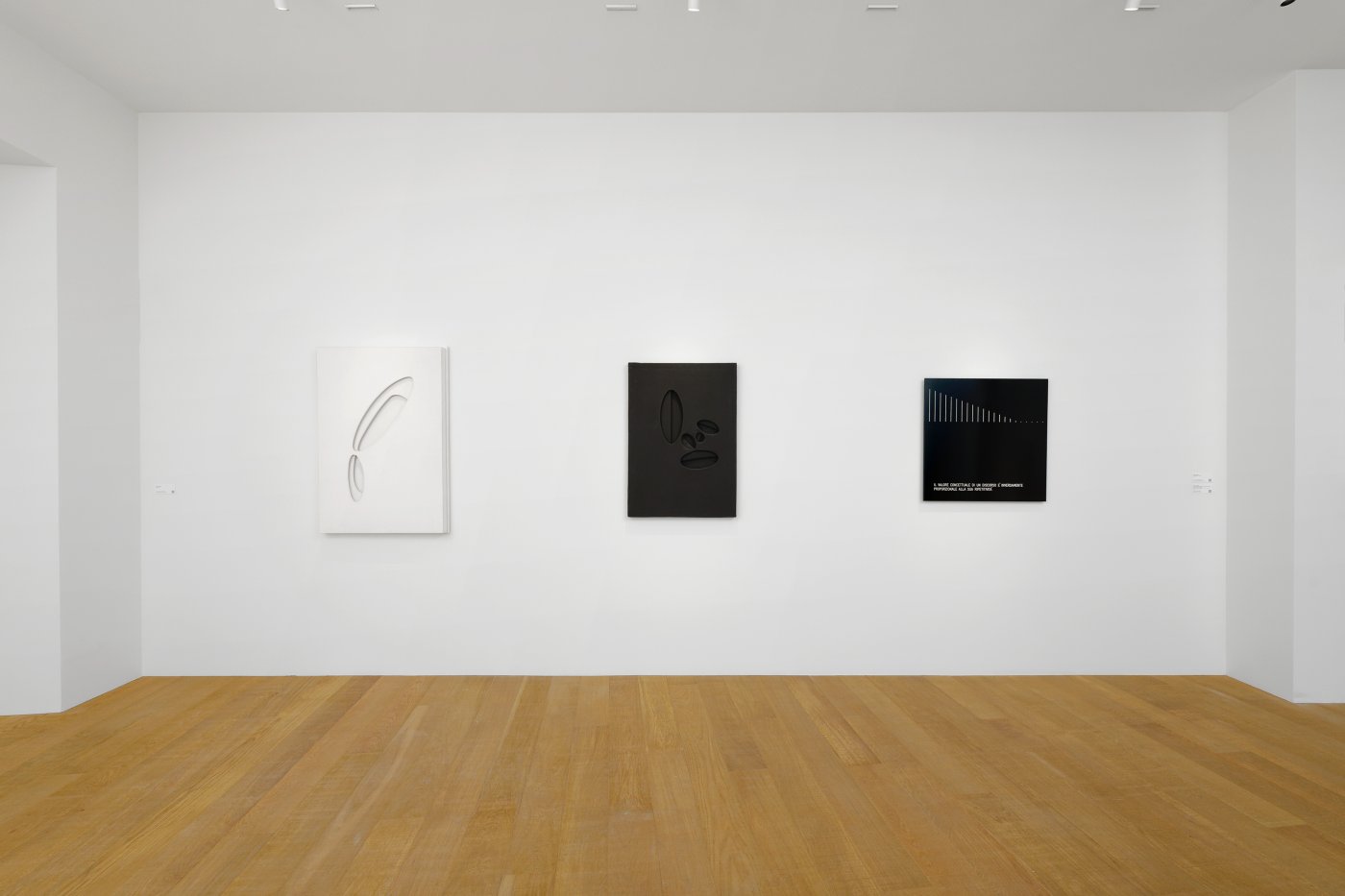 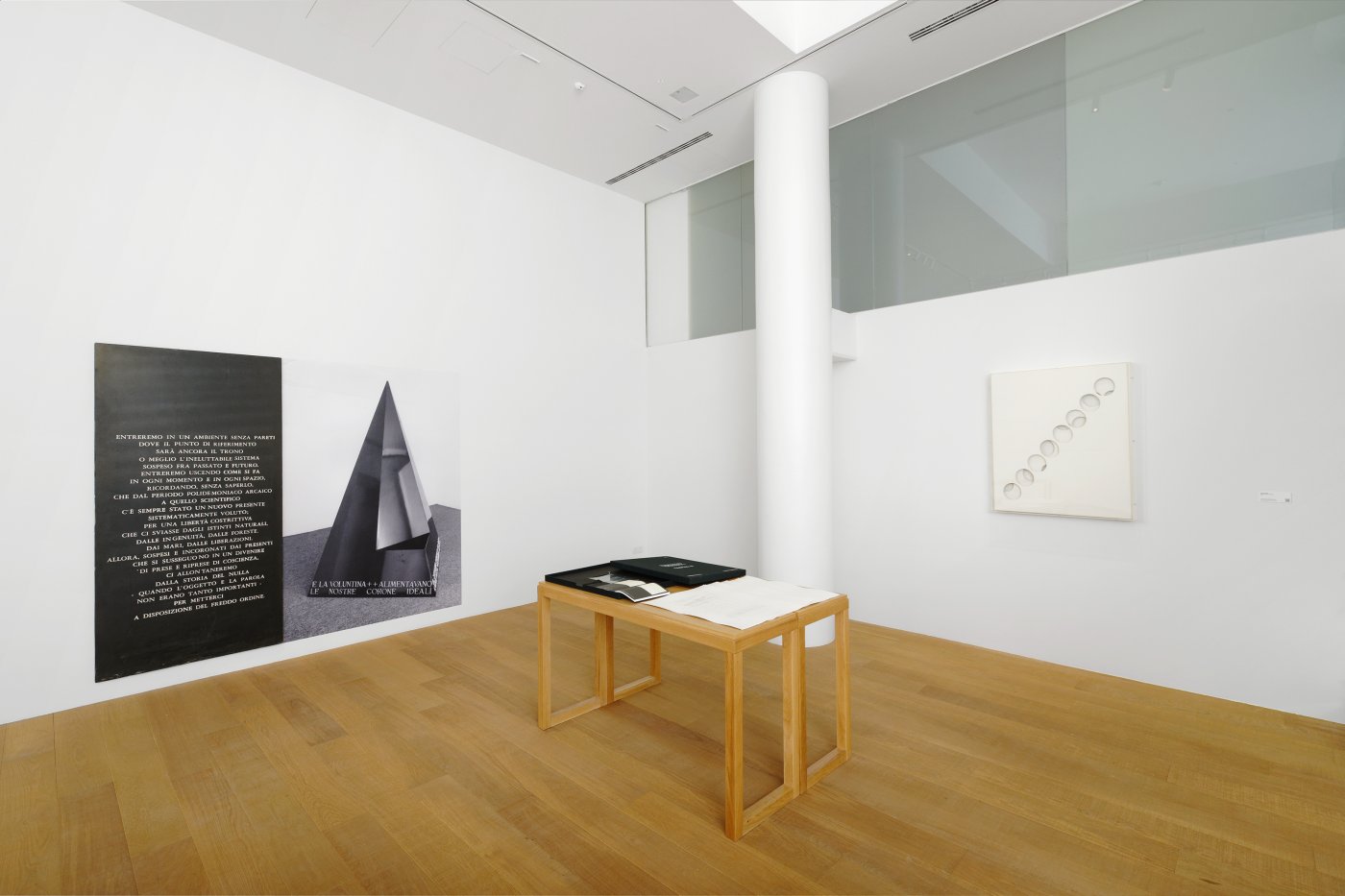 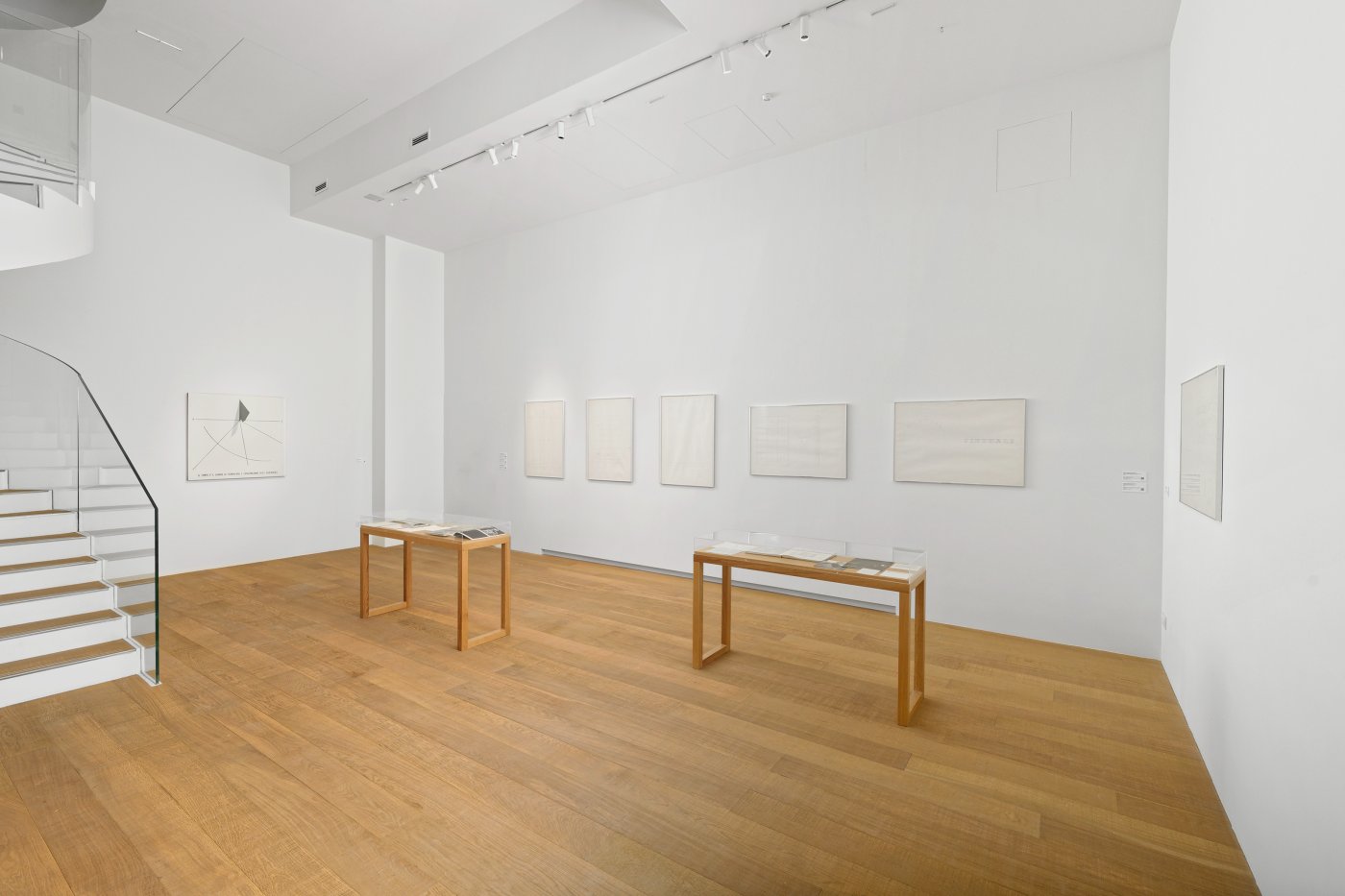 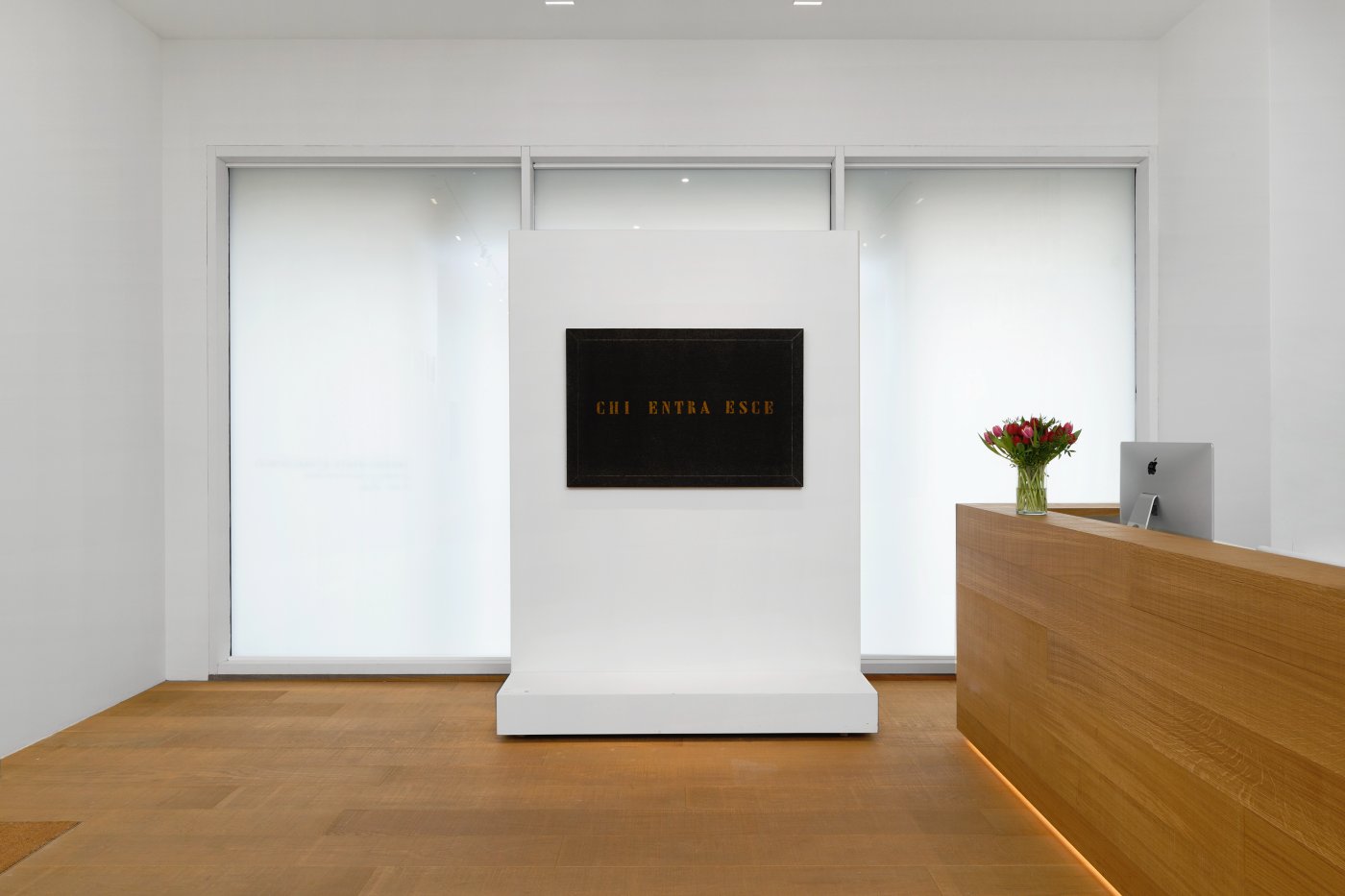 The project stems from the rediscovery, scientific investigation and restitution to the public of a joint work by the artists Vincenzo Agnetti (1926-1981) and Paolo Scheggi (1940-1971), entitled: The Temple. The Birth of Eidos.

It is a work conceived by the two artists in Milan between 1970 and 1971, which remained unfinished, at an early design stage, due to Paolo Scheggi’s premature death. It consists of architectural drawings, sketches and notes for a temple containing linguistic objects representing the primary forms of social, subjectivity and power. Eidos, from the Greek ειδος, can be translated as ‘form’. A philosophical term, this word is defined by Plato as ‘idea’, in the Aristotelian school as ‘form’ and by Husserl as ‘essence-idea’.

Rigorous in their graphic and terminological definitions, the panels of The Temple. The Birth of Eidos shows its views, its plan, and its elevation. They describe the materials of a sacred architectural building, with an indication of scale and a list of the objects that this precious vessel contains: The Pre-existing Object, the Virtual Currency, the Word Holder, the Milestone. These are terms and images which, read today, give an idea of the visionary contemporaneity of the project and of the two artists’ research, capable of anticipating very topical themes such as virtual currency, the manipulation of language, the transmigration of cultural forms and the control of the media.

These reflections led to the work Il Trono (The Throne), created by Agnetti and Scheggi in 1970 and exhibited in Rome at the Galleria Mana Art Market. The Temple. The Birth of Eidos testifies to the extraordinary vitality of thought of the two artists who, starting in the late 1960s, agreed to tackle certain political and philosophical issues that are still at the heart of our debate today.

The importance of this project meant that in April 2020 the two Archives, assisted by Bruno Corà and Ilaria Bignotti, began a careful analysis and close comparison of over twenty project documents found in their respective collections.

After a year and a half of work, studies, comparisons and in-depth studies, the two archives presented this extraordinary project to the public in the prestigious setting of the Museo del Novecento, on the occasion of the 50th anniversary of its conception. This was a first on a national and international scale and an opportunity to highlight a still little-known aspect of these two artists, who have been at the centre of Tornabuoni Art’s research and representational activities for many years.

The presentation of this project is accompanied by a selection of works by Vincenzo Agnetti and Paolo Scheggi.