In Fu’s first exhibition with Halsey McKay, installed in the upstairs gallery, the eponymous exhibition pairs a large printed silk curtain, part of an ongoing body of work by the artist, with a suite of new photographs. 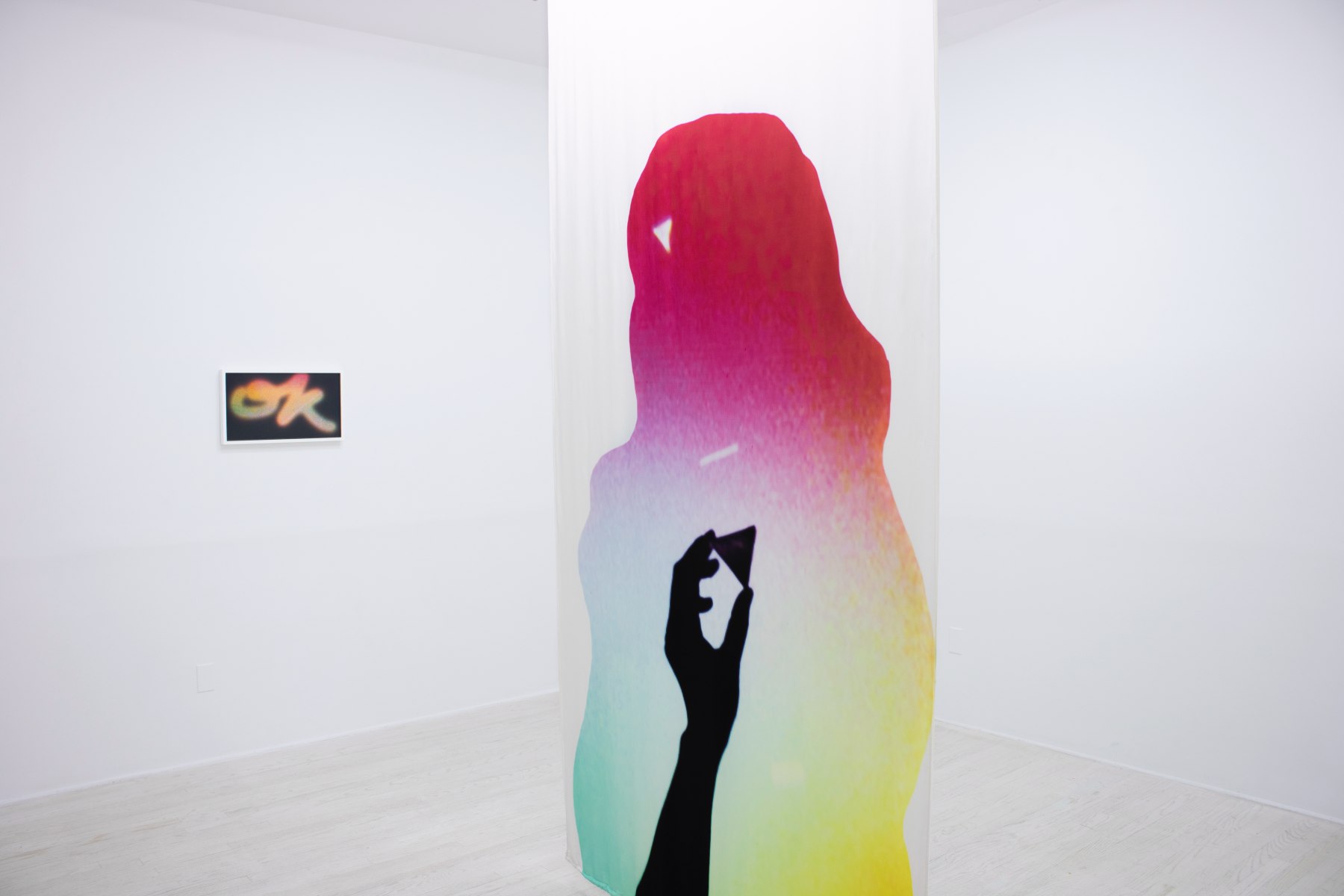 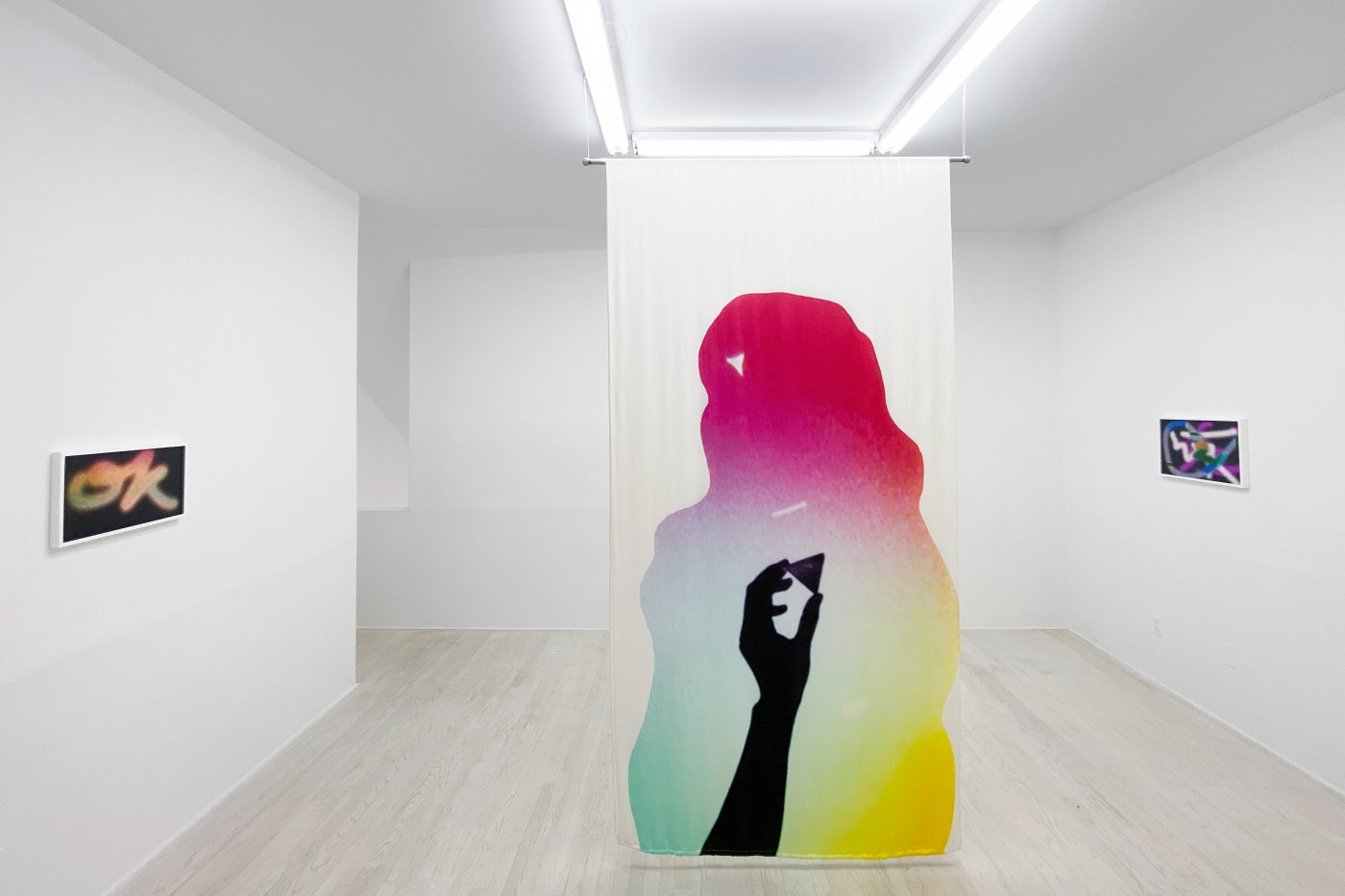 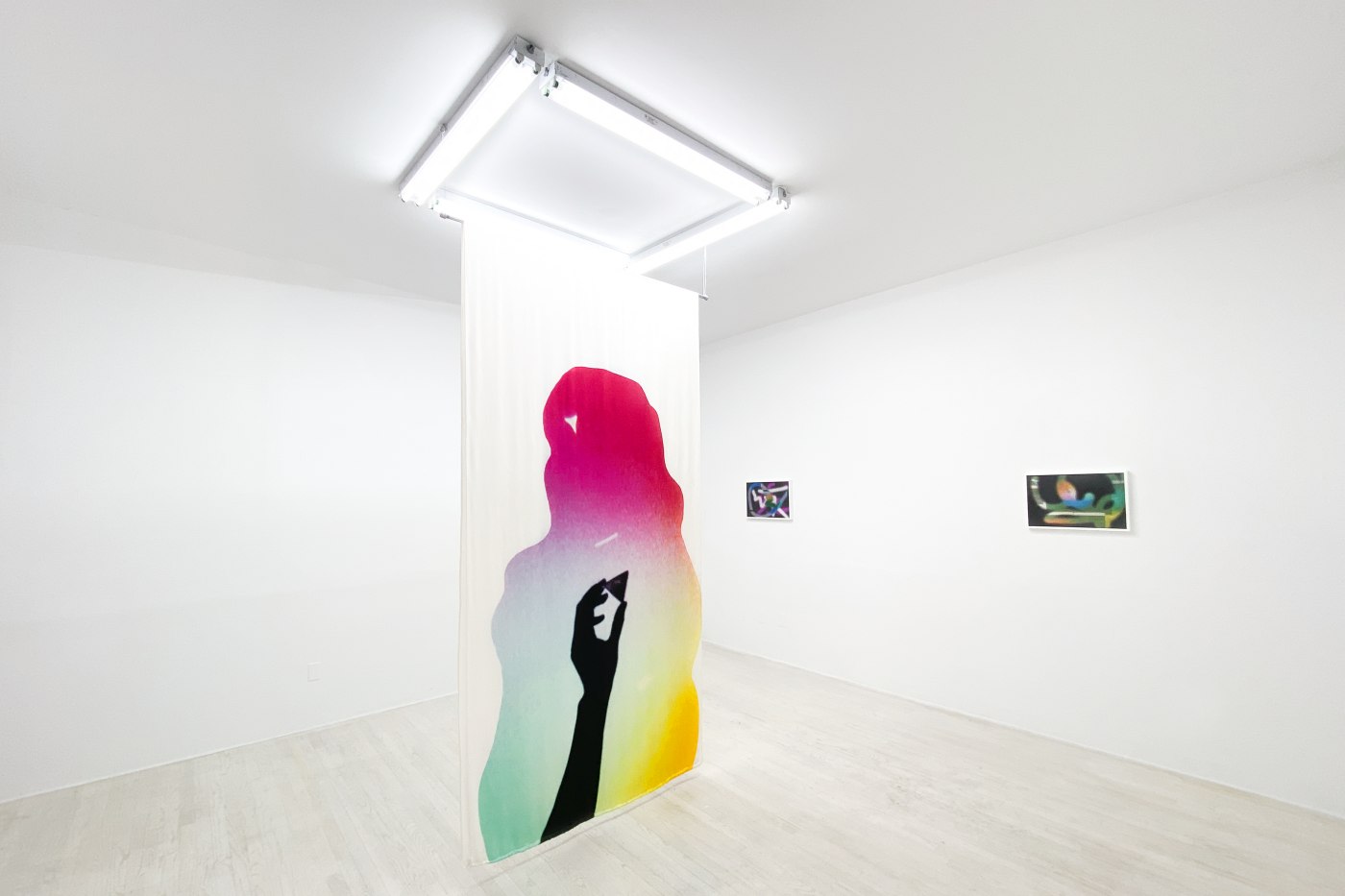 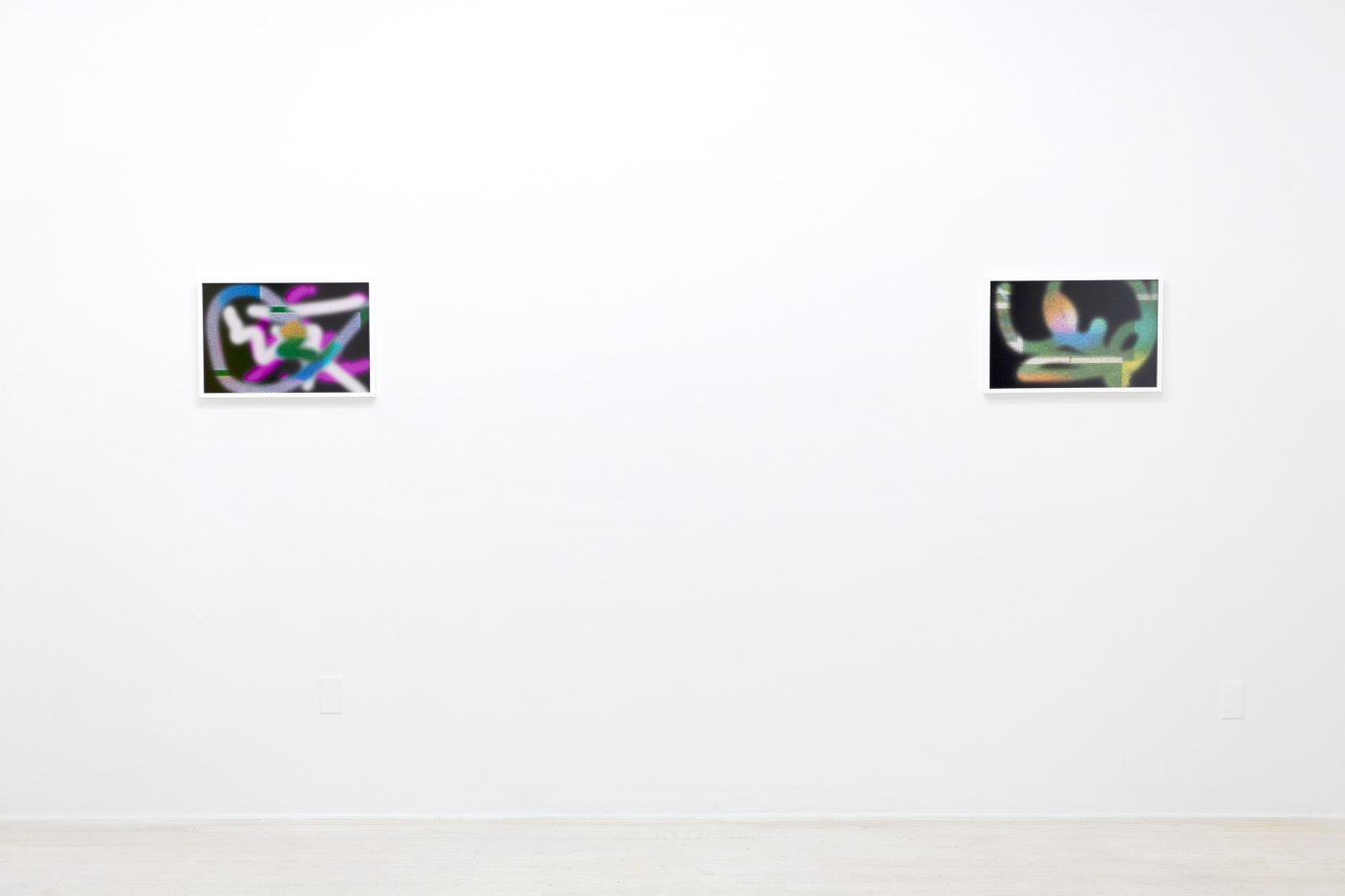 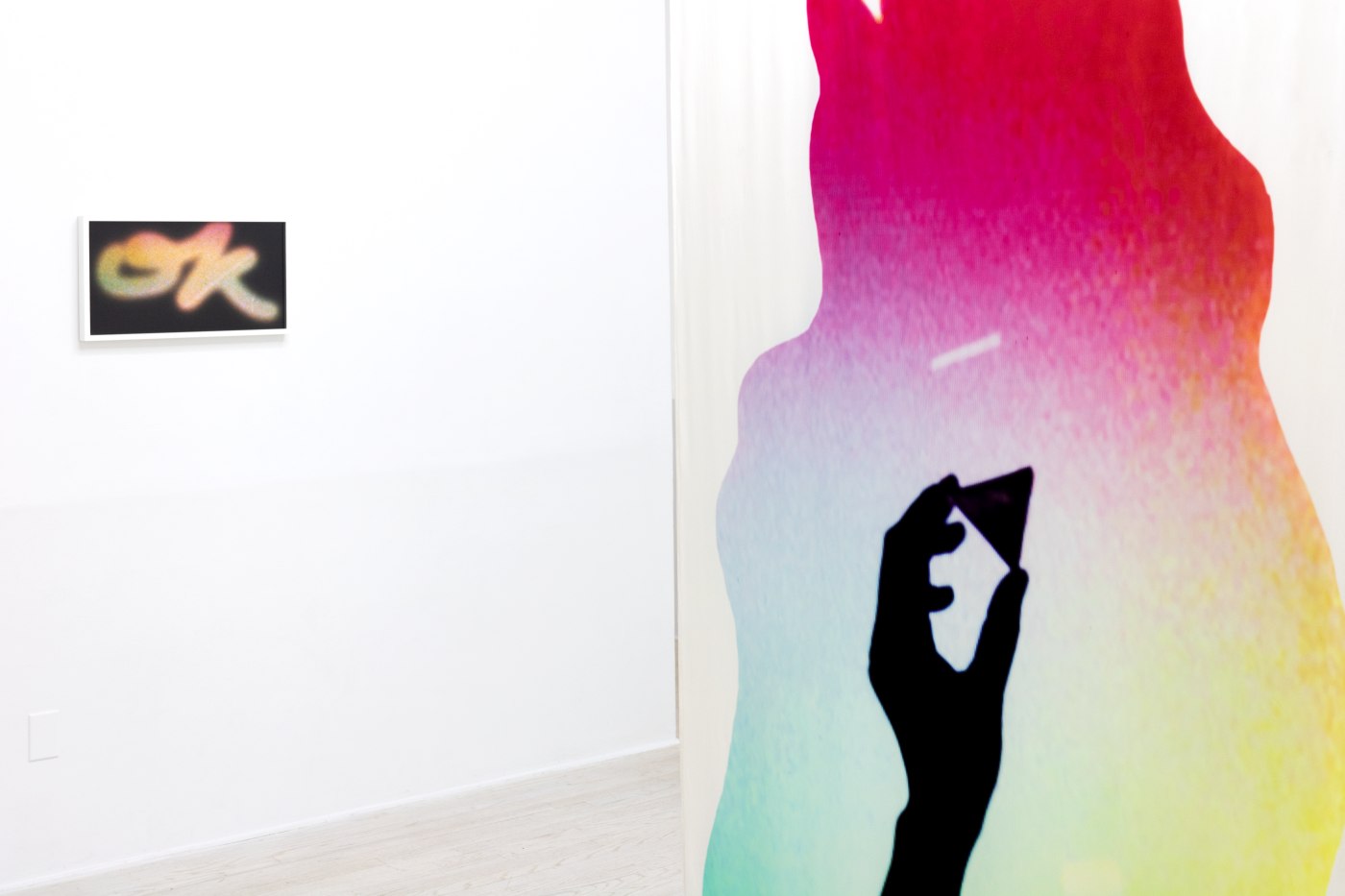 Arranged in this grouping, the works refer to our now common practice of touching and living with layers of screens—depicting colorful desktops, illuminated gradient windows and long, trailing marks.

Examining our mediated relationships to the digital world and its spaces, Fu’s work typically begins from technical images created with lens-based cameras, which Fu then manipulates and arranges, proceeding with a painterly sense of color and space. In doing so, Fu references both our lived and virtual surroundings, our lives immediately in and infinitely beyond the gallery.

A centerpiece of sorts, Fu’s Curtain 3 likewise occupies many positions at once: a screen, a photograph and a functional art object. Its depiction of a desktop references our expanding haptic engagement—with both the flat world of computer and touchscreen interfaces and the surfaces of lush textiles. The photographs, in turn, explore the perspectives and feelings of touch, as reimagined in the contemporary digital age. Together, the works are a many-leveled reflection on living with screens and the lives of images.

Victoria Fu (b. 1978) is a visual artist who received her MFA from California Institute of the Arts, MA in Art History/Museum Studies from the University of Southern California and BA from Stanford University. She attended the Whitney Independent Study Program and Skowhegan School of Painting and Sculpture. Fu was a recipient of a 2015 Guggenheim Fellowship. Recent solo exhibitions include Victoria Fu at DOCUMENT, Chicago; Victoria Fu and Matt Rich: Monster A. at Orange County Museum of Art, Costa Mesa, Calif.; Victoria Fu, a Deutsche Bank Lounge Commission at Frieze LA, Paramount Theater Lobby, Los Angeles and Out of the Pale at Museum of Contemporary Art, Tucson, Ariz. Fu’s work was included in the 2014 Whitney Biennial at the Whitney Museum of American Art, New York and has been featured in exhibitions at the Pérez Art Museum, Miami; Museum of Contemporary Art San Diego, San Diego; 52nd and 53rd New York Film Festivals, New York and IX Nicaragua Biennial, Managua, Nicaragua, among others. Her works are included in the collections of the Whitney Museum of American Art; Pérez Art Museum; Los Angeles County Museum of Art, Los Angeles; MIT List Visual Arts Center, Cambridge, Mass. and Museum of Contemporary Art, San Diego. She lives and works in San Diego, where she is Associate Professor of Art at the University of San Diego.