VICTOR VASARELY. Einstein in the Sky with Diamonds

VICTOR VASARELY. Einstein in the Sky with Diamonds

Mazzoleni presents VICTOR VASARELY. Einstein in the Sky with Diamonds, a selection of major works by the master of optical and kinetic art, covering almost his entire career from the 1950s to the 1980s. 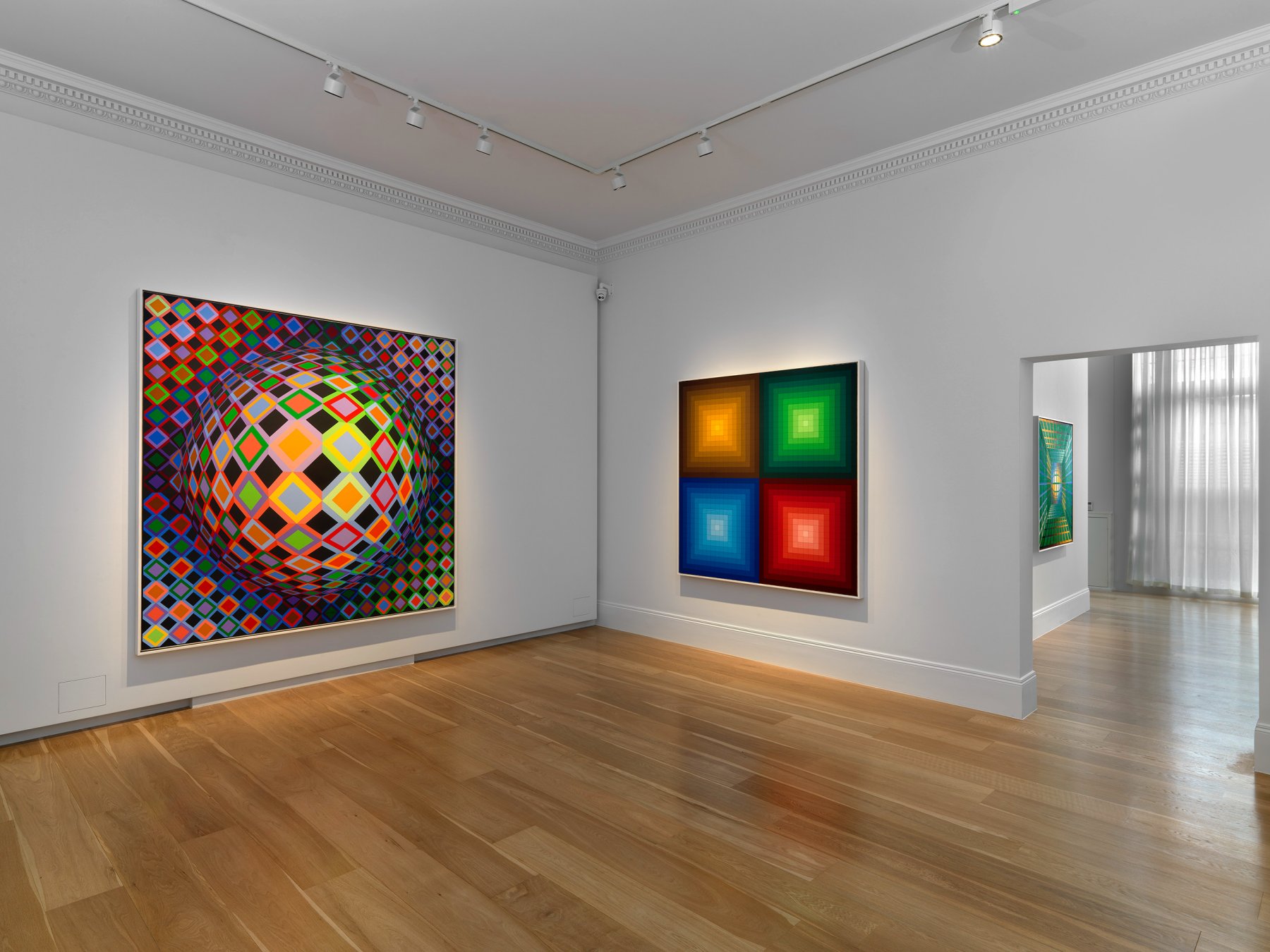 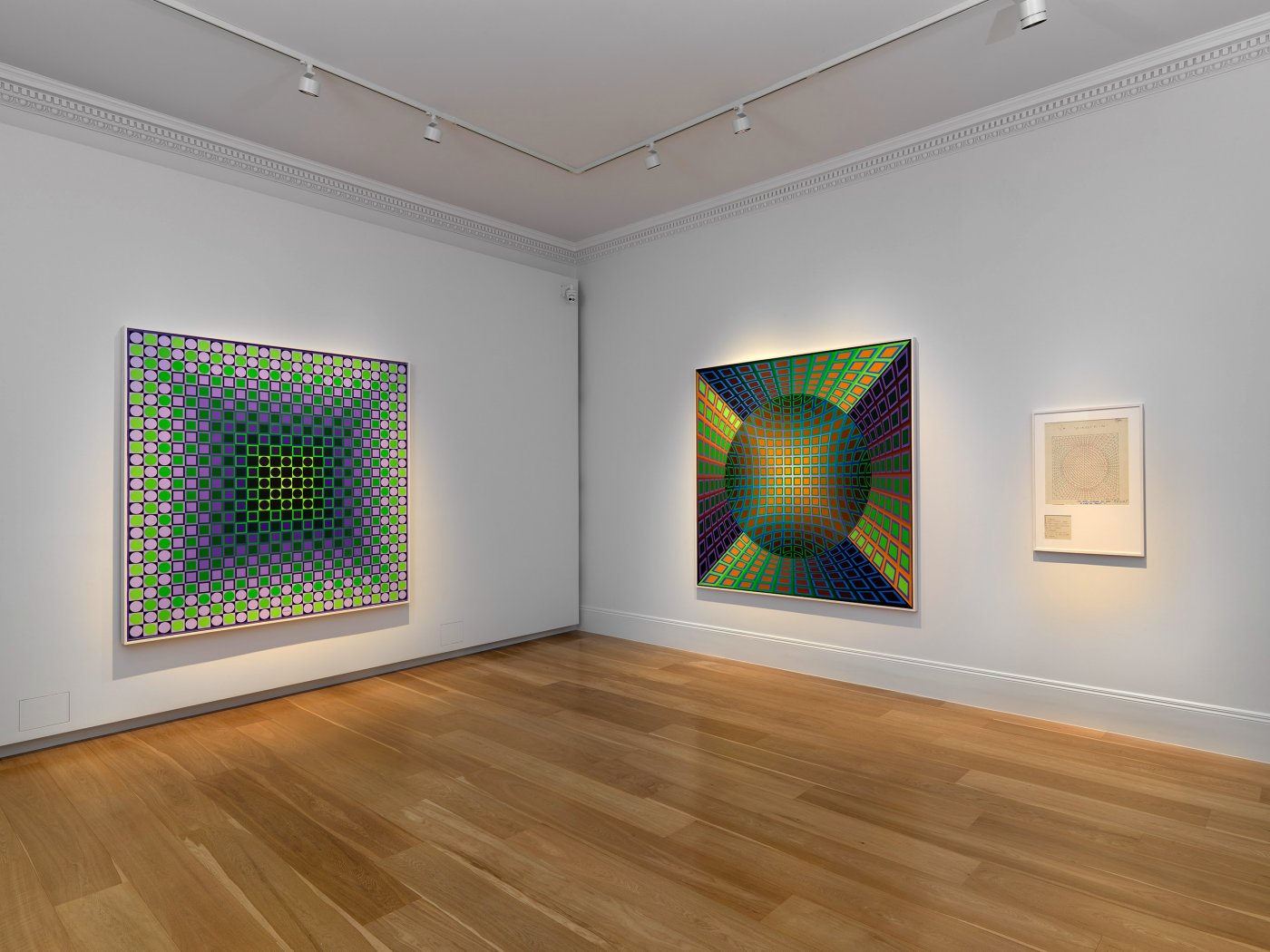 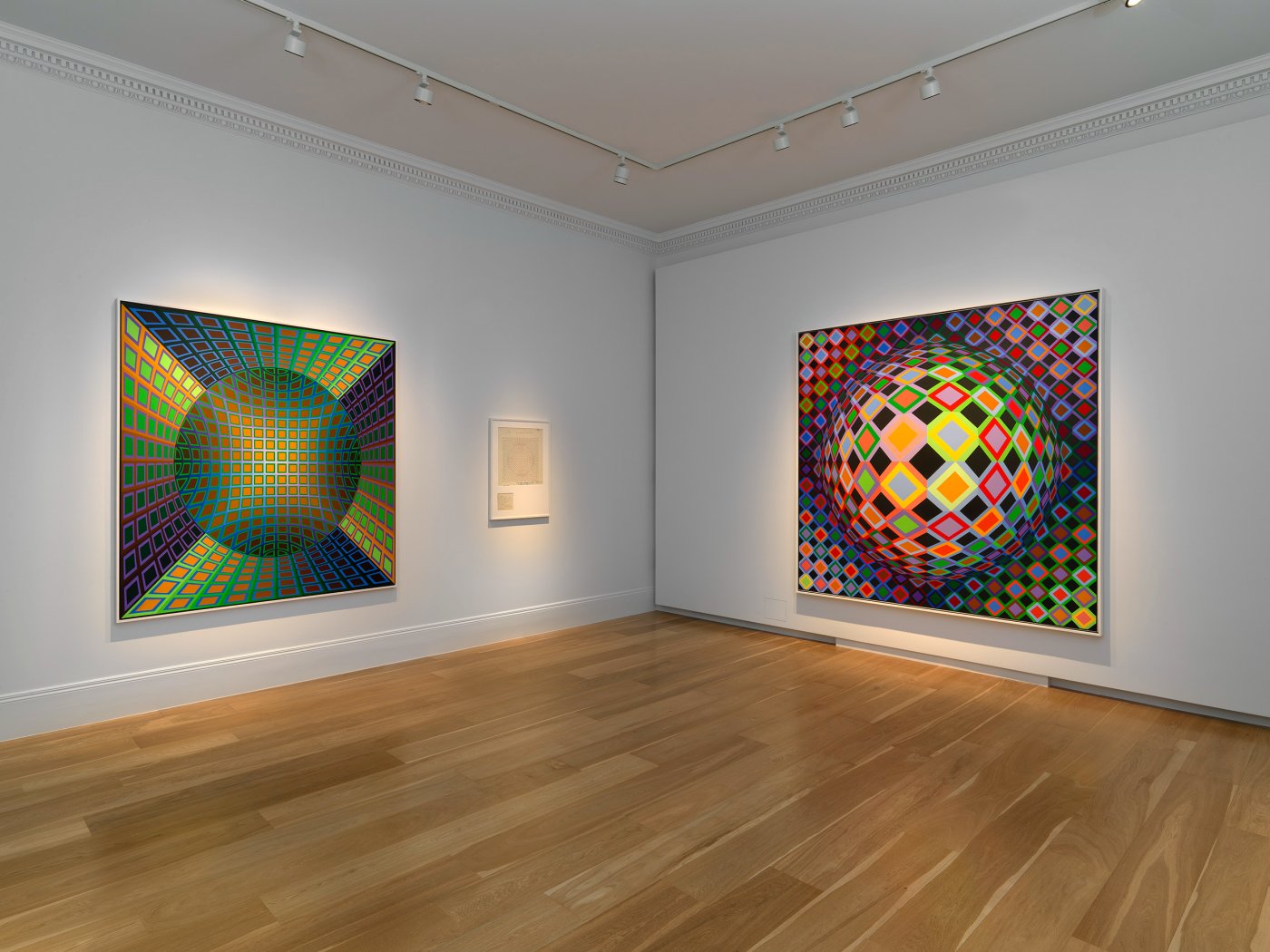 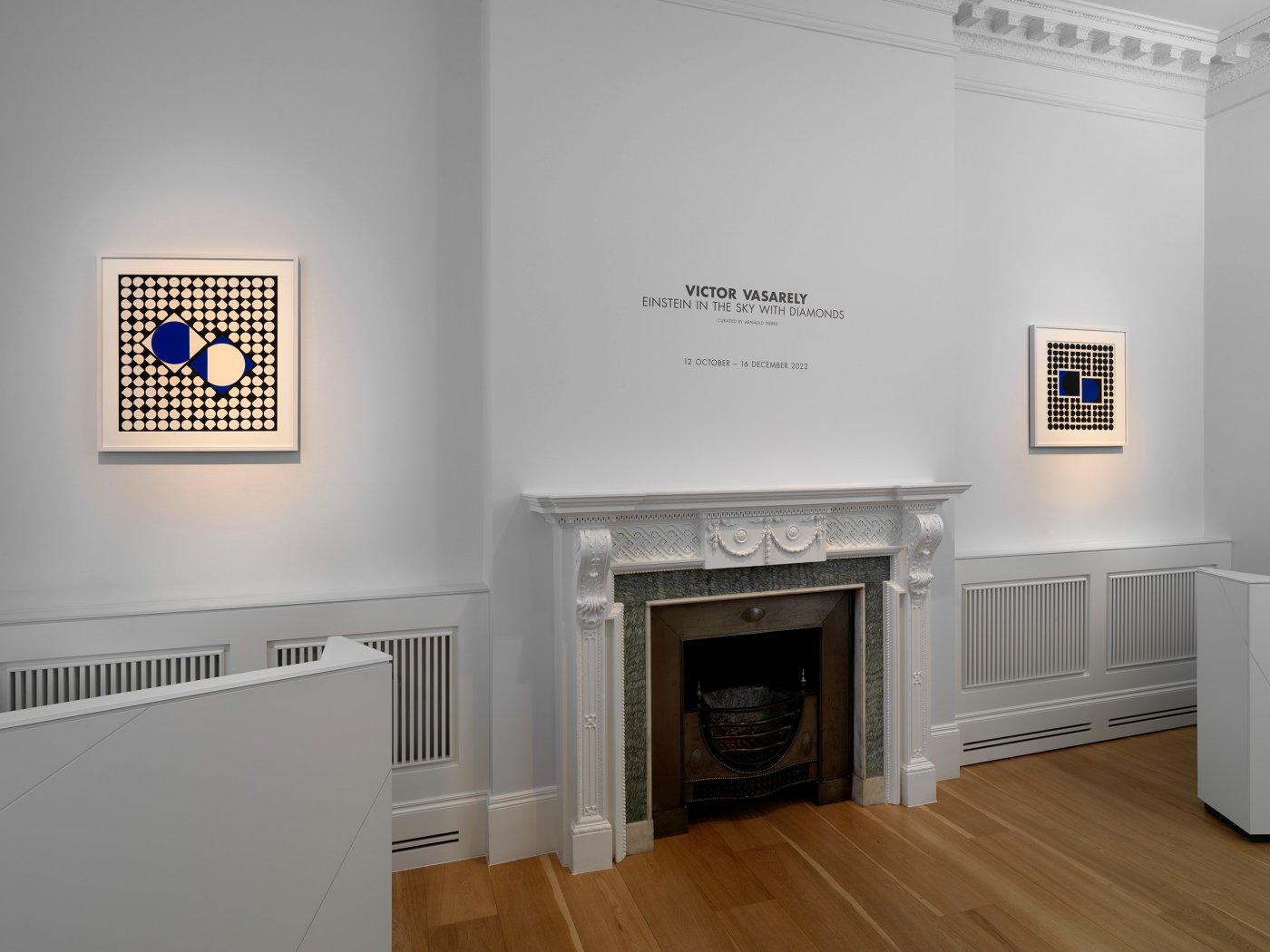 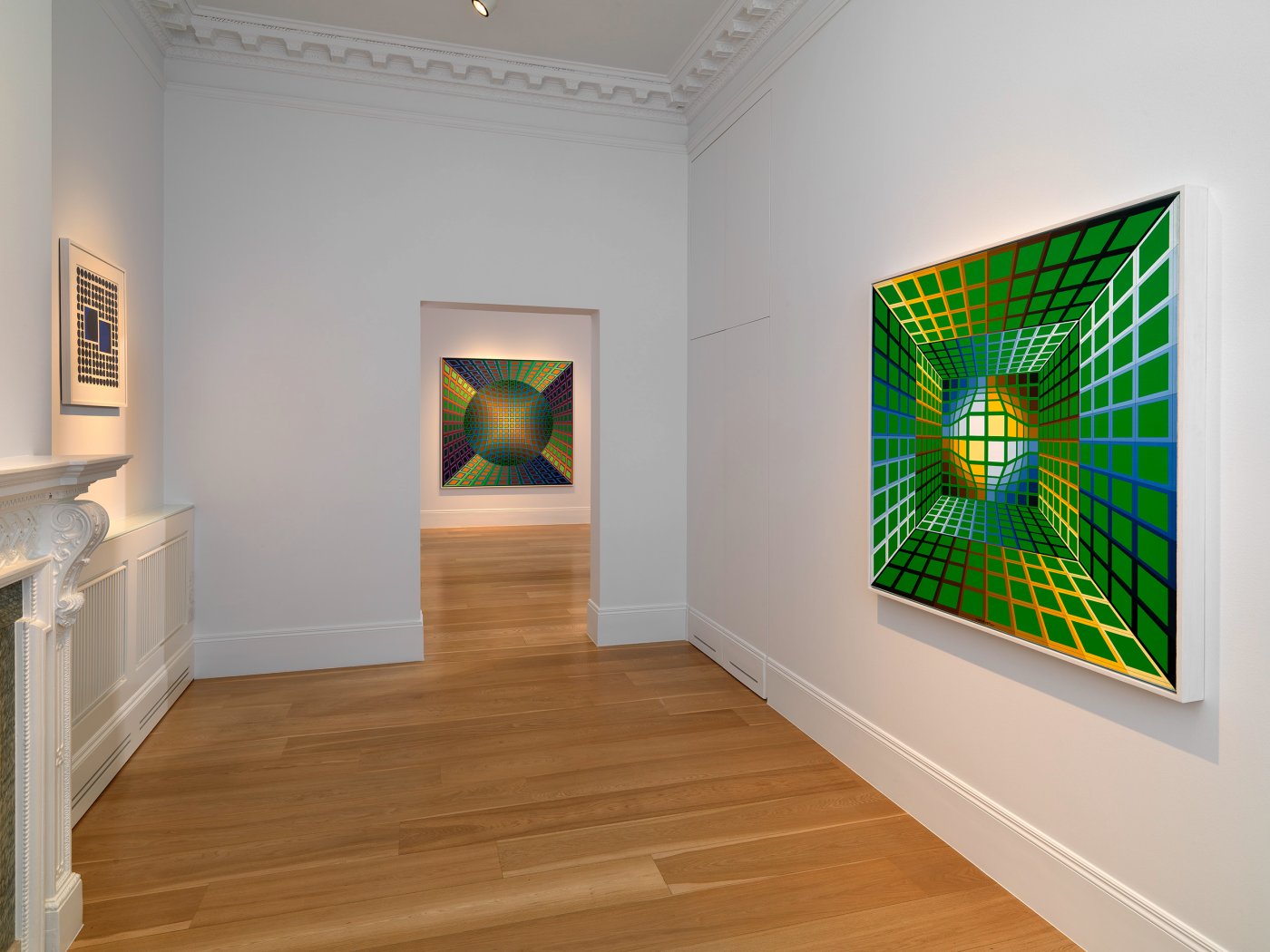 The exhibition presents some of the first compositions in which Vasarely experimented with the activation of the surface by the use of small, repeated geometric units and the vibrant alternation of black and white patterns, such as the striking Cassiopée 3 (1957). Dating from the 1950s, these works invented the language of Op Art. In the following decade, the painter rationalized the use of those “plastic units” by distributing them inside grids where the variations of tones and shades were rigorously modulated, as it is evident in the sculptural shapes and contrasting colours of Arc Tur (1968). When planning his works, Vasarely used to prepare preliminary scale drawings and models – or “programmations” in his own terms – of which an example will be also presented. The patterns generate light waves that modulate the surface and radiate towards the viewer. The grids themselves deform and produce depressions or protuberances that move the surface towards a higher dimension.

The exhibition is dominated by Einstein-Ker (1976), a large canvas whose title refers to the founder of the theory of relativity, Albert Einstein. Fascinated by the scientific discoveries of his time, Vasarely sought to translate them into “plastic equivalents”. The treatment of formal elements is not limited to simple formalism, as they produce visual phenomena connecting with the invisible manifestations of matter or the “supra-dimensions” of the universe. According to his approach, the alternation of positive and negative in the 1950s compositions would visually express the hypothesis of anti-matter and the existence of mirror universes. The plastic units would be like the simple bodies of contemporary physics and their optical vibrations would transpose the infra-atomic energies. The deformations of the grid would be equivalent to the distortions of the spatial-temporal continuum with the passage of astronomical bodies. Vasarely’s compositions dominate an Einsteinian sky, meaning the vast body of conceptions about the universe and matter revealed by modern astronomy and physics, and by the theory of relativity in particular.

On the occasion of the exhibition, Mazzoleni will publish a catalogue in which Arnauld Pierre, co-curator of the retrospective Vasarely, Sharing Forms at Centre Pompidou in 2019, will discuss the scientific poetics that the painter placed at the heart of his work as well as the universalist ideals that guided his practice.

VICTOR VASARELY
Victor Vasarely was born on April 9, 1906, in Pécs, Hungary. In 1927, after studying medicine at the Budapest University for two years, he left school to devote himself to art. In 1929 he enrolled at Mühely, a school founded by Alexandre Bortnyik and based on the principles of the Dessau Bauhaus. It was during this time that he first encountered Constructivism and Abstract Art. In 1930 he moved to Paris, where he started to work as a graphic designer. During his first graphic period (1929-1946), Vasarely laid the foundations for his future artistic practice. Between 1935 and 1947 the artist rediscovered painting. Influenced by Cubism and Surrealism, he focused on portrait, landscape, and still life. His works dating from the “Belle-Isle” period (1947–1958) marked his passage into abstraction through the use of natural materials. The “Denfert” period (1951-1958) gave rise to peculiar designs inspired by the walls of the Denfert-Rochereau Métro station in Paris. Works from the “Cristal-Gordes” period (1948–1958) were characterized by a juxtaposition of contrasting, brightly coloured shapes, while in his work from the “Black and White” period (1950-1965), Vasarely revisited his former graphic tendencies. In 1955 he exhibited with several other representatives of the Kinetic Art movement at Denise René Gallery in Paris and the same year published his “Manifeste Jaune.” In 1965 he took part in Responsive Eye, an exhibition at The Museum of Modern Art, New York, dedicated to Optical Art. Vasarely continued to explore movement and perception, and in his so-called “Vonal” period (1964–1970) he went back to drawing, combining the linear and graphic themes of his “Black and White” period with a new exploration of colour. His “Vega” period began in 1968, at which time he deformed the compositional elements to create the optical illusion of a dilated painted surface. In 1976 he founded the Vasarely Foundation in Aix-en-Provence, affirming his belief that art should be linked to its social context and environment. The artist passed away in Paris on 15 March 1997.