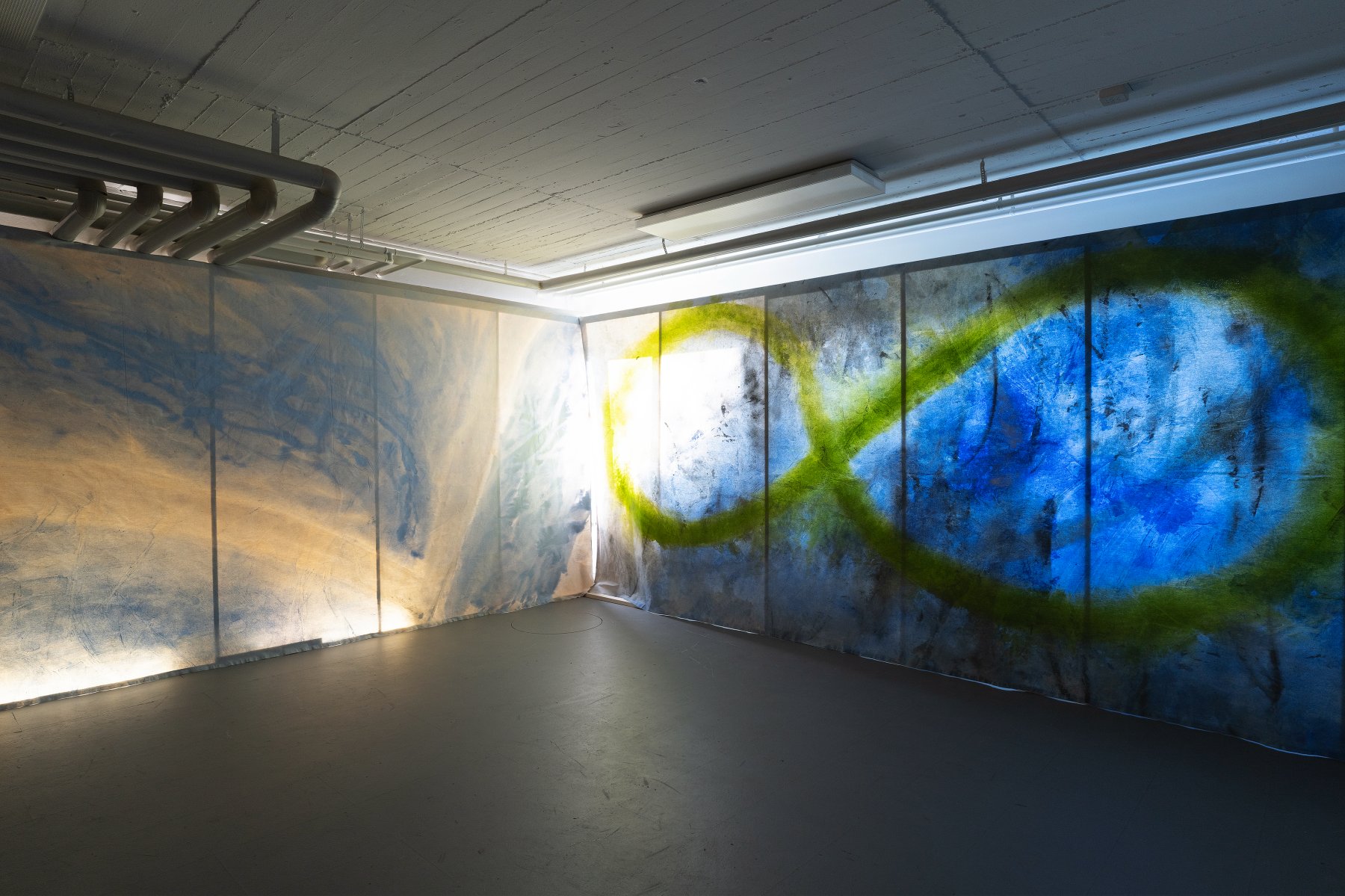 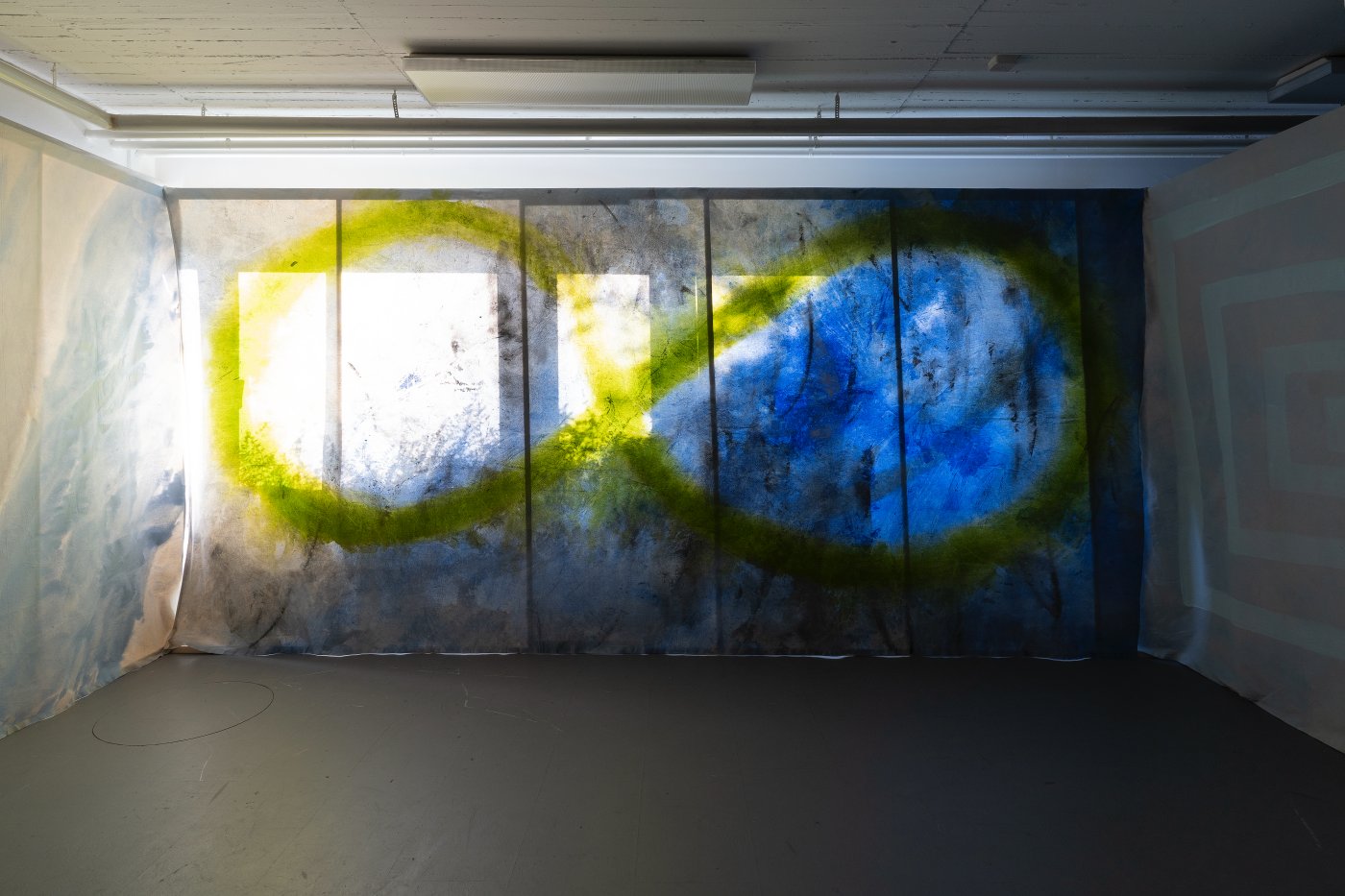 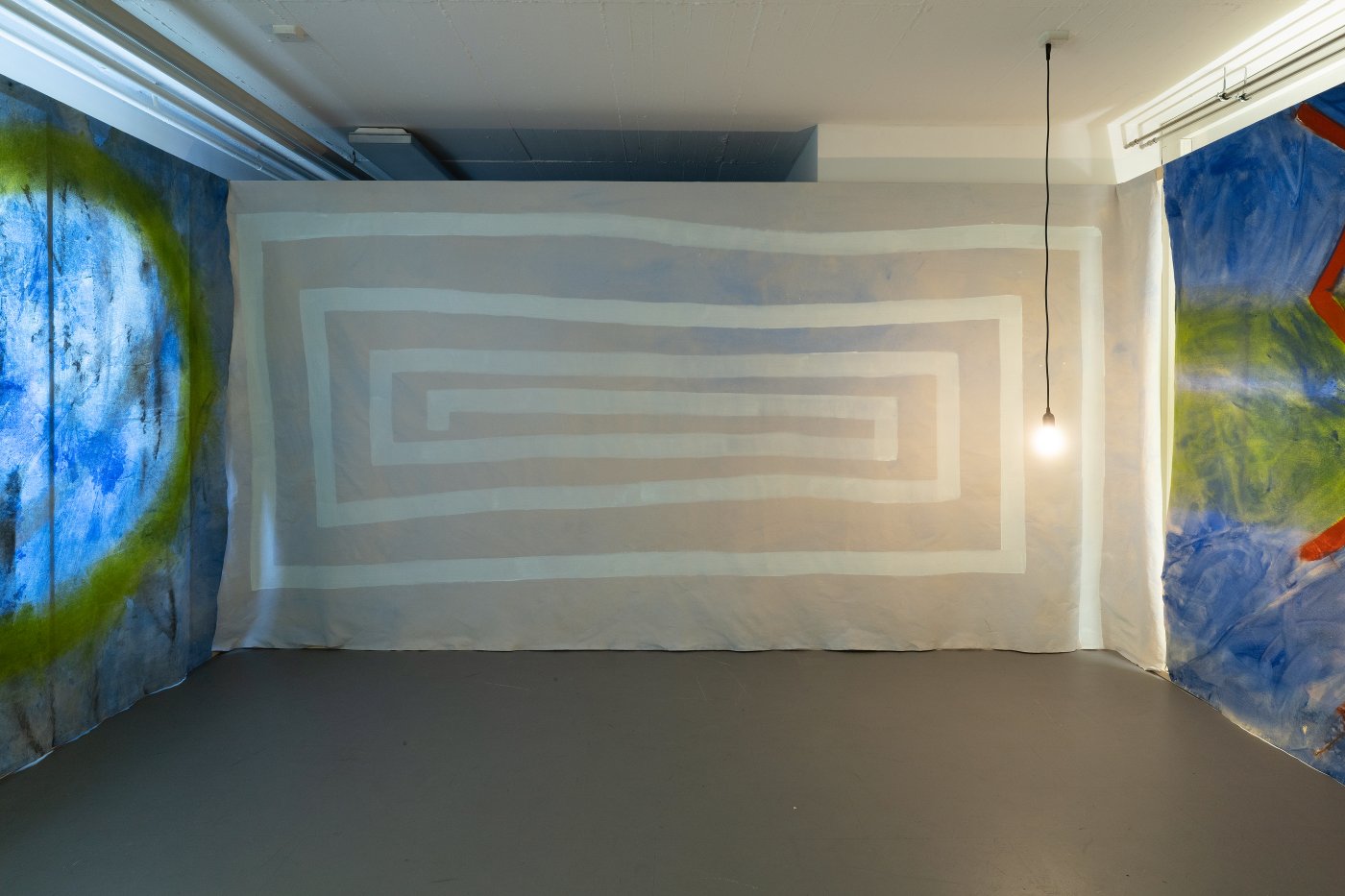 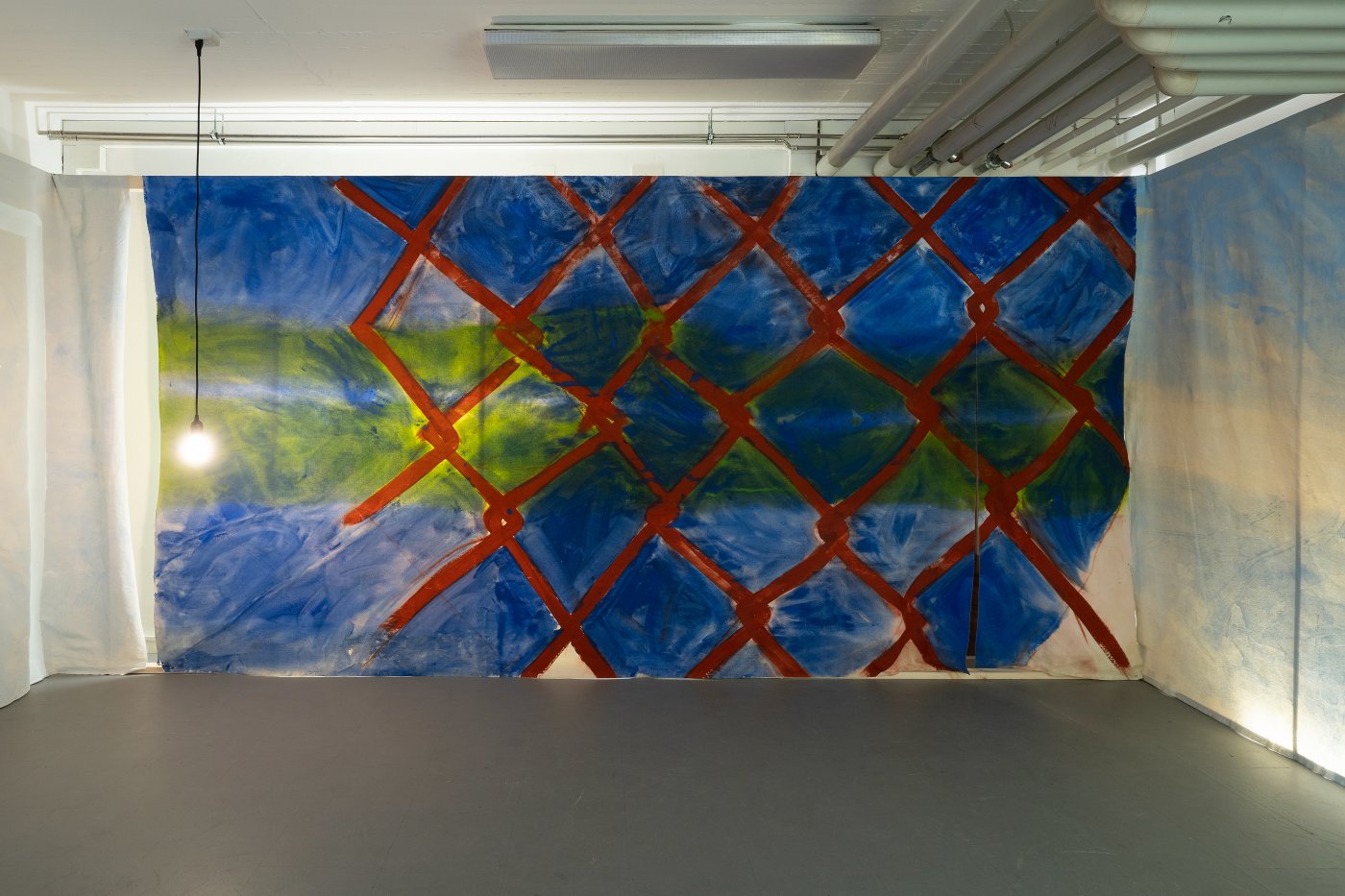 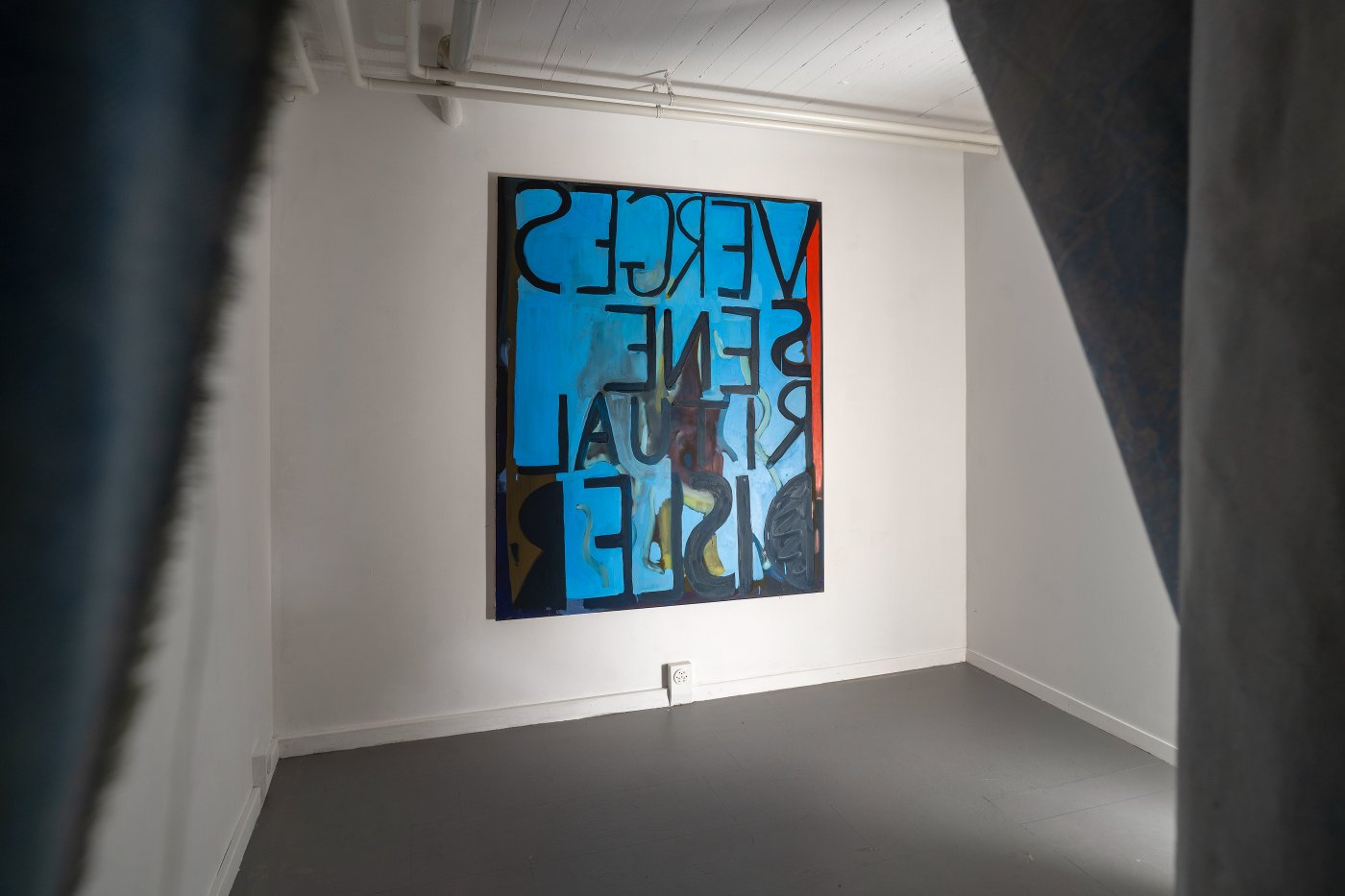 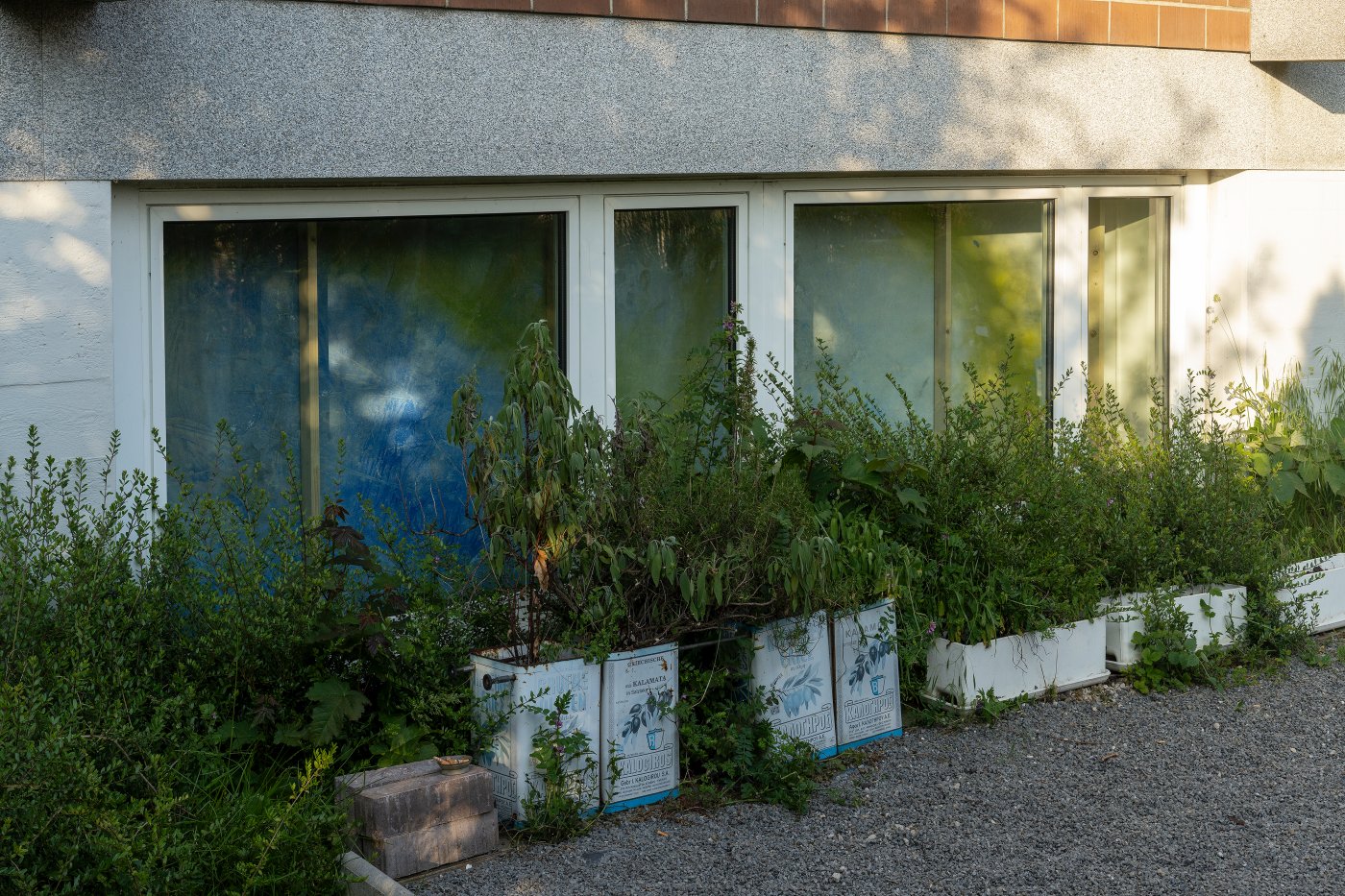 In the formation of a painting or sculpture Vanessa Disler draws from a multitude of sources; a piece of music; an excerpt of 1970s autofiction; the atmosphere of a movie. These fragments become spurs in cultivating a visual language used to communicate psychological states elicited from lived experience. This exhibition at Damien & The Love Guru takes its title from the 1992 neo-noir directed by Paul Schrader, in which Willem Dafoe stars as a drug dealer having an existential midlife crisis. Our alienated protagonist traverses the city of night, selling wares to yuppies and well-heeled deviants such as ‘Tis’ (a character redolent of Patrick Bateman) who is described in the screenplay as “thirty-five, Swiss, linen jacket, horn-rim glasses, Cerruti Euro-swank” (1). Elegantly shot in crepuscular glooms, Light Sleeper has a distinctly dreamlike quality; it is replete with visual symbolism and paintings feature prominently. In a notably contrived sex scene a blown up reproduction of Vermeer’s Lacemaker looms large over the two lovers.

Schrader’s Light Sleeper addresses ideas that have preoccupied Vanessa Disler for some time; kismet, chance encounters, uncanny correspondences and the possibility of psychic communication. In a memorable moment in the movie, our protagonist John la Tour converses with an ex-lover and one time fellow addict and reflects upon the hedonism of their previous life. Responding to his rose-tinted views of the past she states that “convenient memory is a gift from God—euphoric recall. You only remember the highs, never the lows”. The term euphoric recall is used by psychologists to describe a tendency whereby recovering addicts fixate upon episodes from their past when they actively sought out psychotropic stimulation. This transcends mere nostalgia; for the summoning of such memories can reactivate neurological reward pathways in the brain; pleasure centres are flooded with serotonin and ecstatic information surges are induced.

While the term originates in psychiatry, euphoric recall can also be applied to other spheres to describe the phenomenon whereby episodes from the past become catalysts for creative potential. Euphoric recall can be used to describe Vanessa Disler summoning the artistic anima of Martin Disler (1949–1996) the Swiss artist whose legacy has been a touchstone for her for several years. Now remembered predominantly as a proponent of the Neue Wilde, Martin Disler’s work typifies how many artists in the early 1980s attempted to sidestep what they saw as an excessively cerebral and etiolated approach to making art. A self proclaimed outsider, Disler believed art should be intense, intimate and spontaneous. Vanessa draws upon Martin’s visual vocabulary while sharing his aspiration to make paintings imbued with personal, historical and archetypal meaning. She too is drawn to the visceral immediacy of expressionism and her engagement with painting is exuberant and sensual. There is a palpable jouissance to Vanessa’s application of paint; works are distinguished by rapid, vigorous brushwork created via spontaneous gestures. Like her predecessor, Vanessa uses archetypal symbols in her work, demonstrated here in the imagery on each side of the painted structure; the depictions of day and night; the eternity loop; the square spiral and patterning resembling rusted chainmail fencing. Both share a propensity for using language in their work, as highlighted here in the three steel ‘gates’ installed in the garden.

The work by Martin Disler that is particularly significant to this exhibition at Damien & The Love Guru is Die Umgebung der Liebe, which dates from 1981 and can be described as his magnum opus. Executed over four nights at the Württembergischer Kunstverein Stuttgart, where it was then displayed, this monumental painting is almost 35 meters in length. Few people saw Die Umgebung der Liebe in person when it was exhibited in 1981 but it became well known via word of mouth and re- productions in magazines and was one of the factors that led to Martin Disler being invited to participate in Documenta 7 the following year. Best remembered for Joseph Beuys’ 7000 Oak Trees, this iteration of Documenta was curated by Rudi Fuchs who, when discussing his vision for the exhibition, stated that he wanted to free art of the “various constraints and social parodies it is caught up in”. Vanessa Disler’s painterly environment, which the viewer must enter directly, echoes Die Umgebung der Liebe and a detail of the masterwork by Martin Disler is found in the Light Sleeper exhibition poster.

In addition to evoking Die Umgebung der Liebe the structure Vanessa Disler has constructed inside the gallery resembles a refuge, sanctuary or panic room. Such a reading is inevitable in this context, for Switzerland is a nation renowned for its fallout shelters. The penchant for bunker building began in earnest in the early 1960s when the escalation of Cold War tensions led to paranoia regarding nuclear holocaust. In 1963 the government issued laws stipulating that all homes must be equipped with adequate shelter space. In the years since many of these zones were adapted into wine cellars or music studios or simply used for storage. Yet events of recent years have seen these spaces reactivated and returned to their original function. The Fukushima nuclear disaster and more recently the invasion of Ukraine have reignited fears many assumed were forever buried in the past.

Just a few miles away from Zollikerstrasse 249, where Disler’s environment is now situated, is the Urania Bunker, one of the largest civil defence bunkers in Switzerland. The upper floors of this sprawling complex currently operate as a multi-storey parking lot known as Urania Parking. The bunker was constructed in the early 1970s on the site of an extant WWII air raid shelter. But before construction of the Urania nuclear bunker began, the subterranean realm was occupied by a countercultural youth group who declared it outside of Swiss jurisdiction and renamed it the “Autonomous Republic Bunker”. In 1971 the local government raided the bunker and evicted the inhabitants. Photos taken before the crack- down capture the heady atmosphere of this short lived commune. These images show a mass of youths sitting on the floor, looking rebelliously at the camera. They are surrounded by murals that they have painted upon the concrete walls; an array of glyphs; spirals; lozenges, ankhs, a lemniscate and a wedjat eye.

1) Vanessa Disler is not the first artist to make work that responds to Schrader’s movie. In 1992 David Salle produced twelve lithographs illustrating scenes from the screenplay.