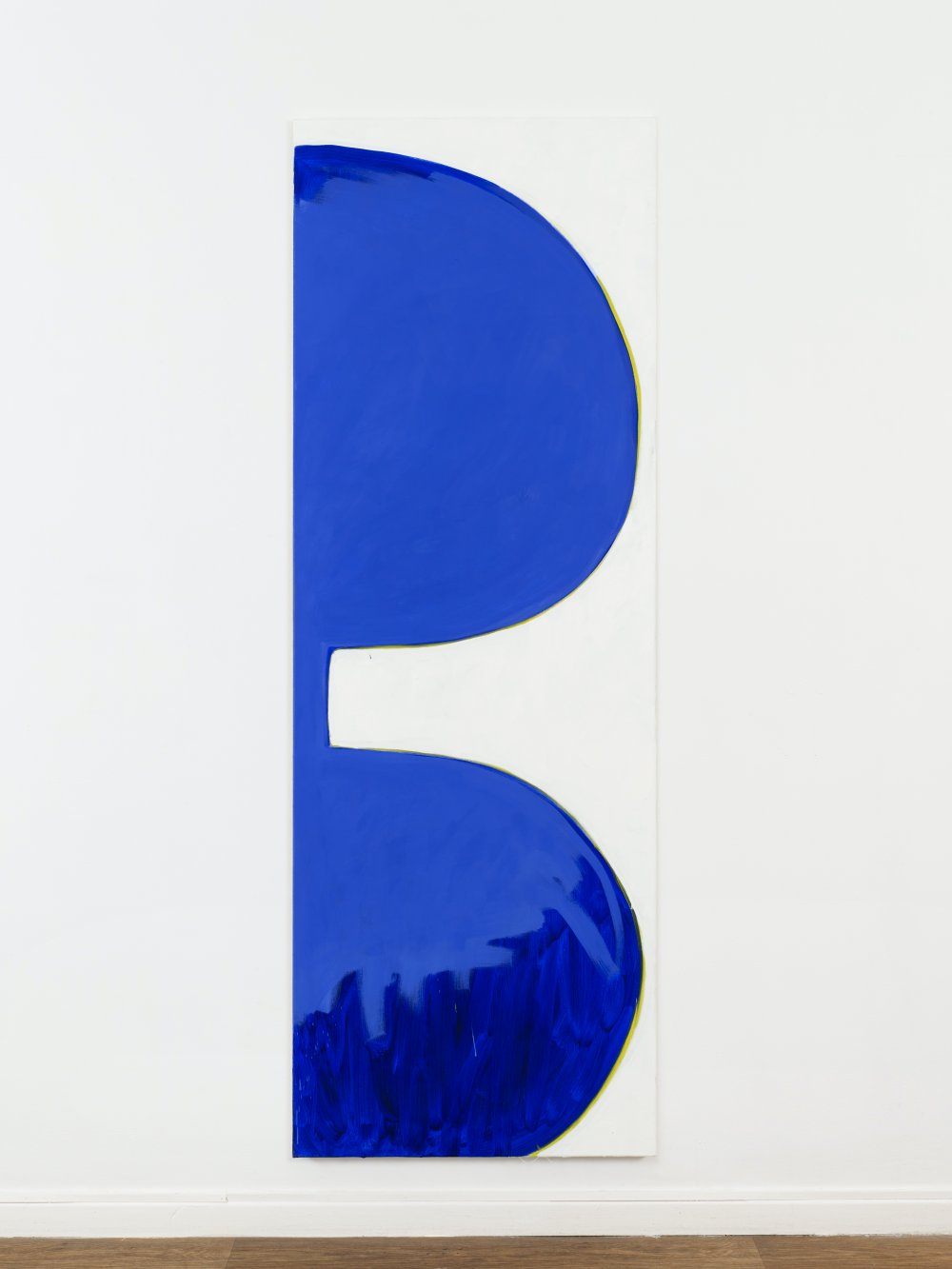 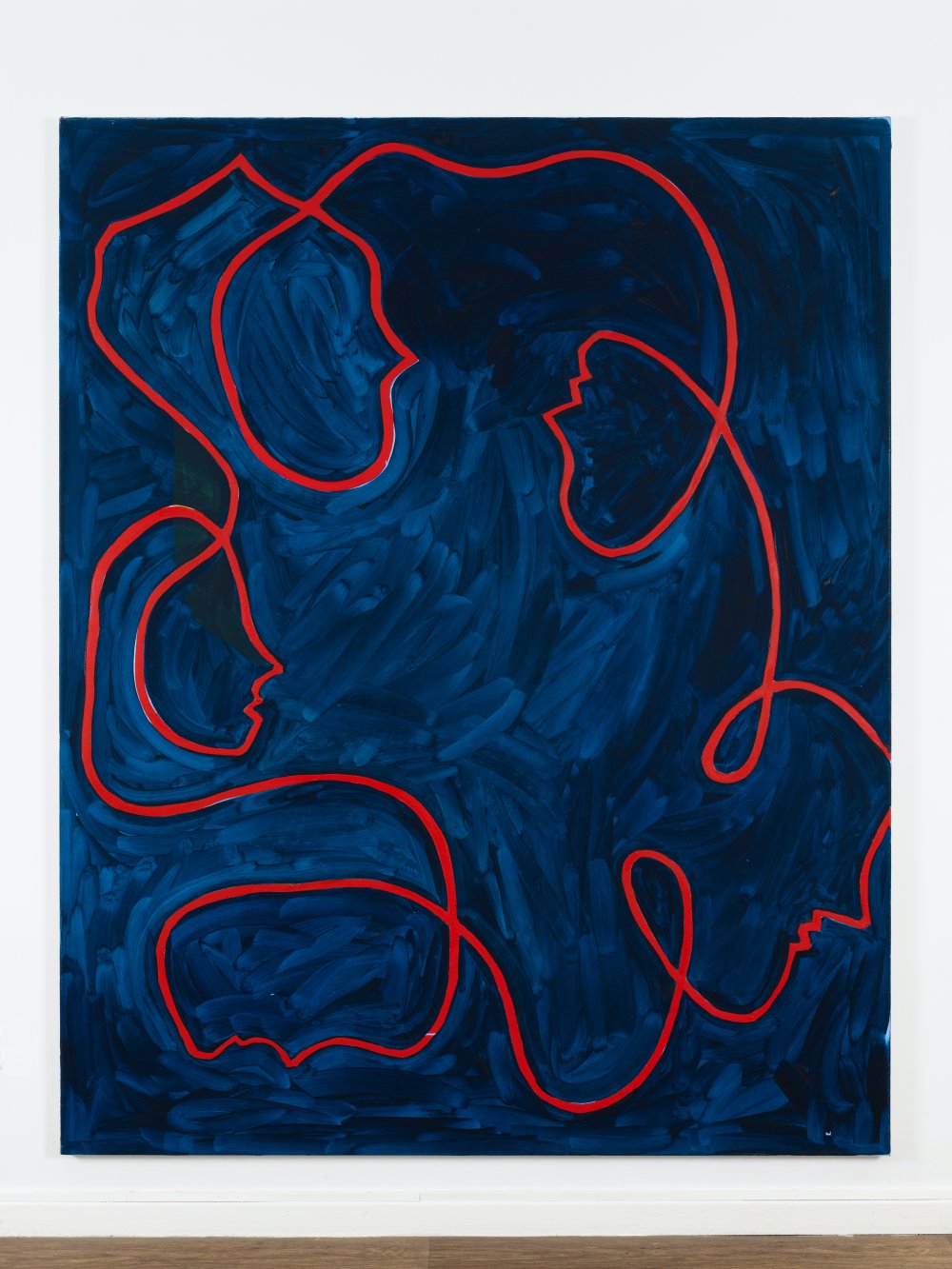 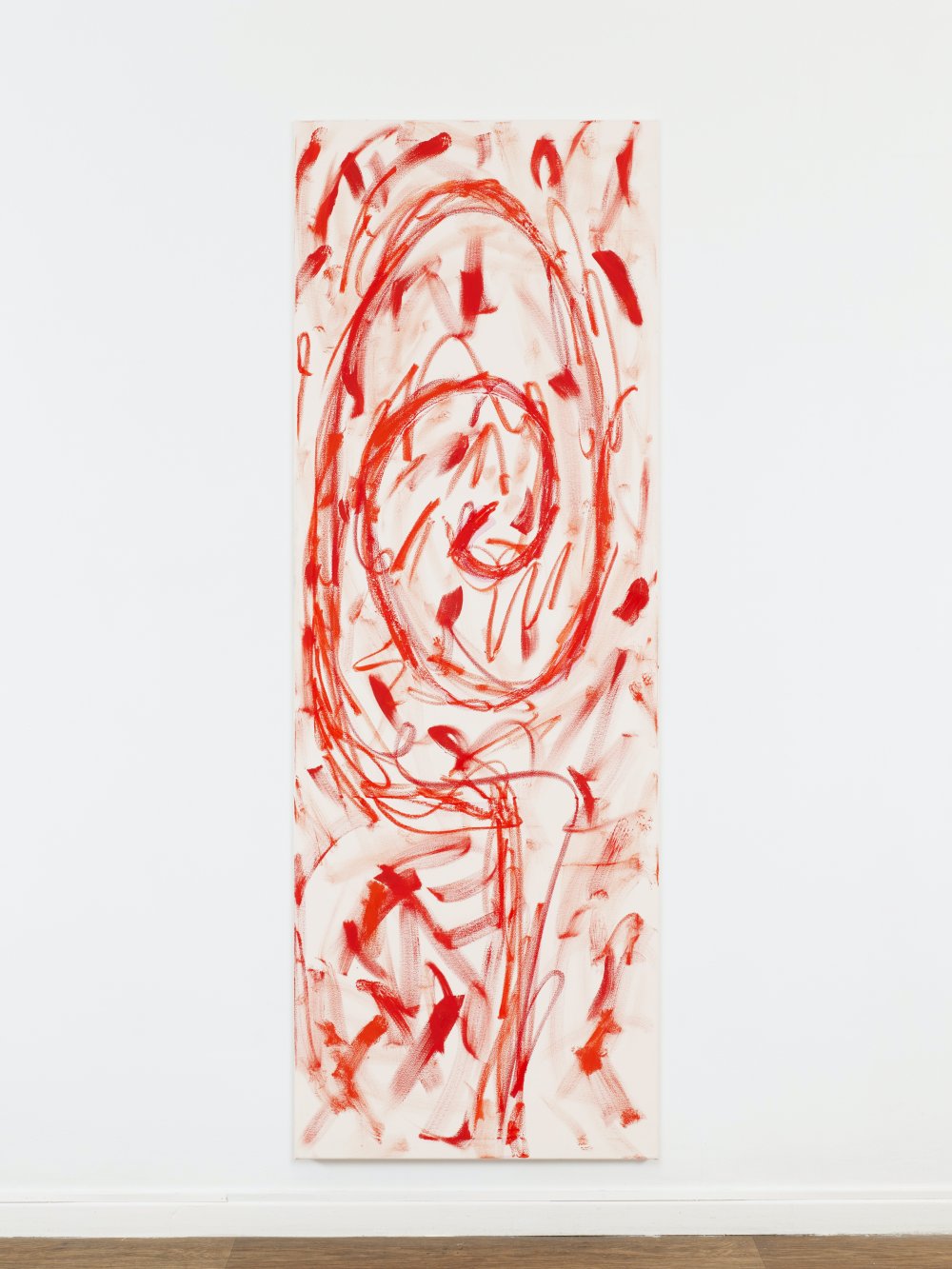 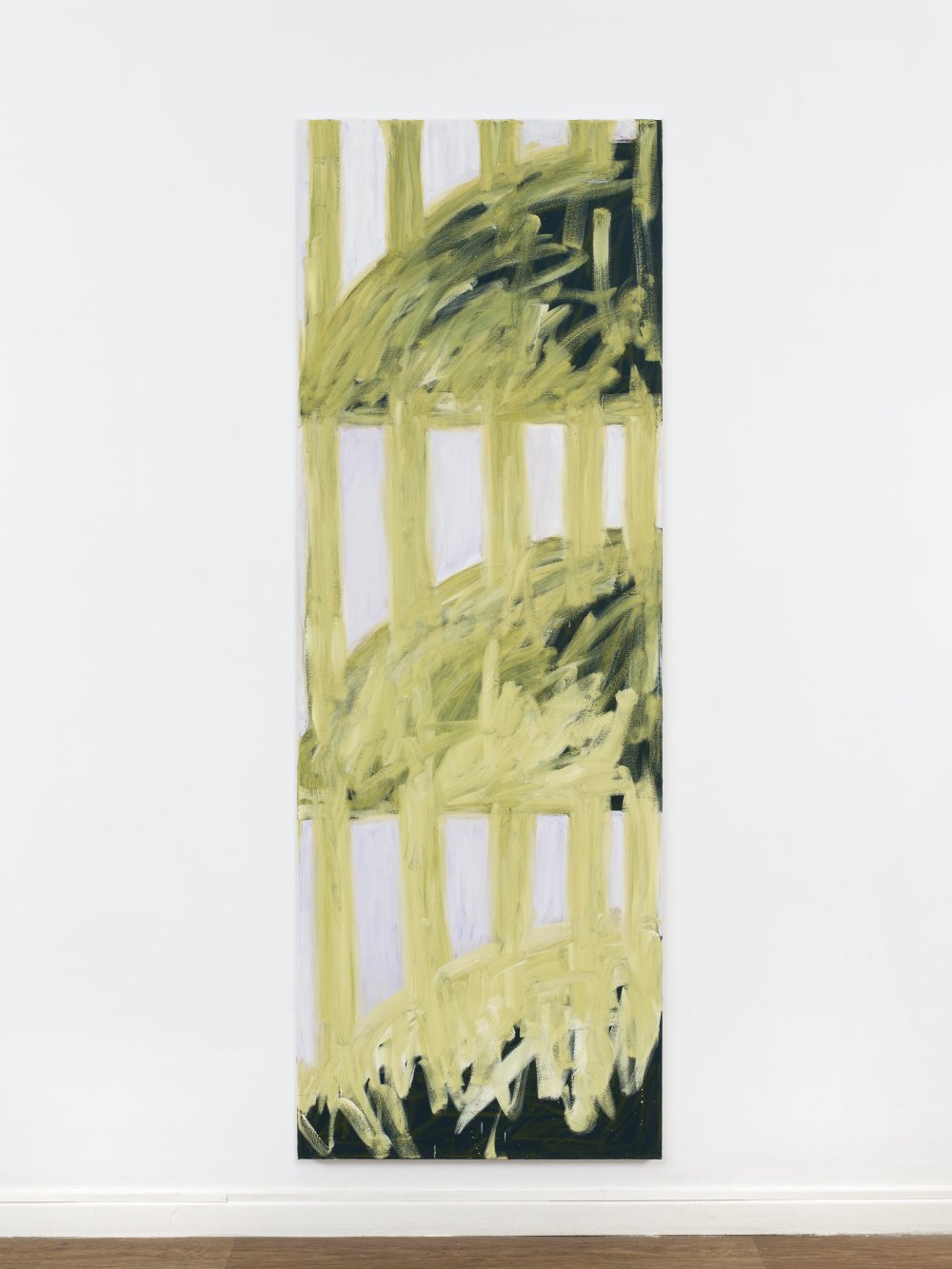 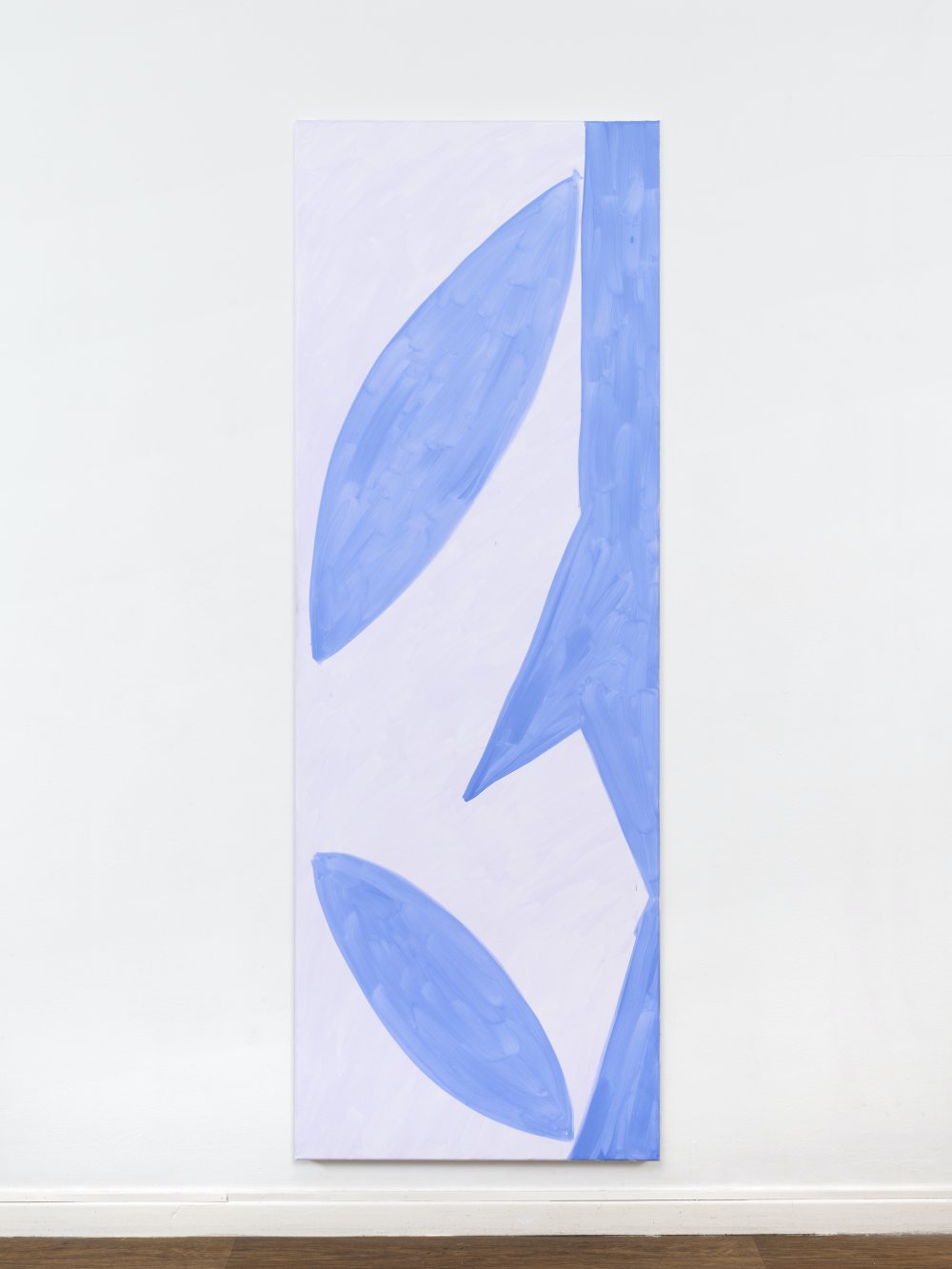 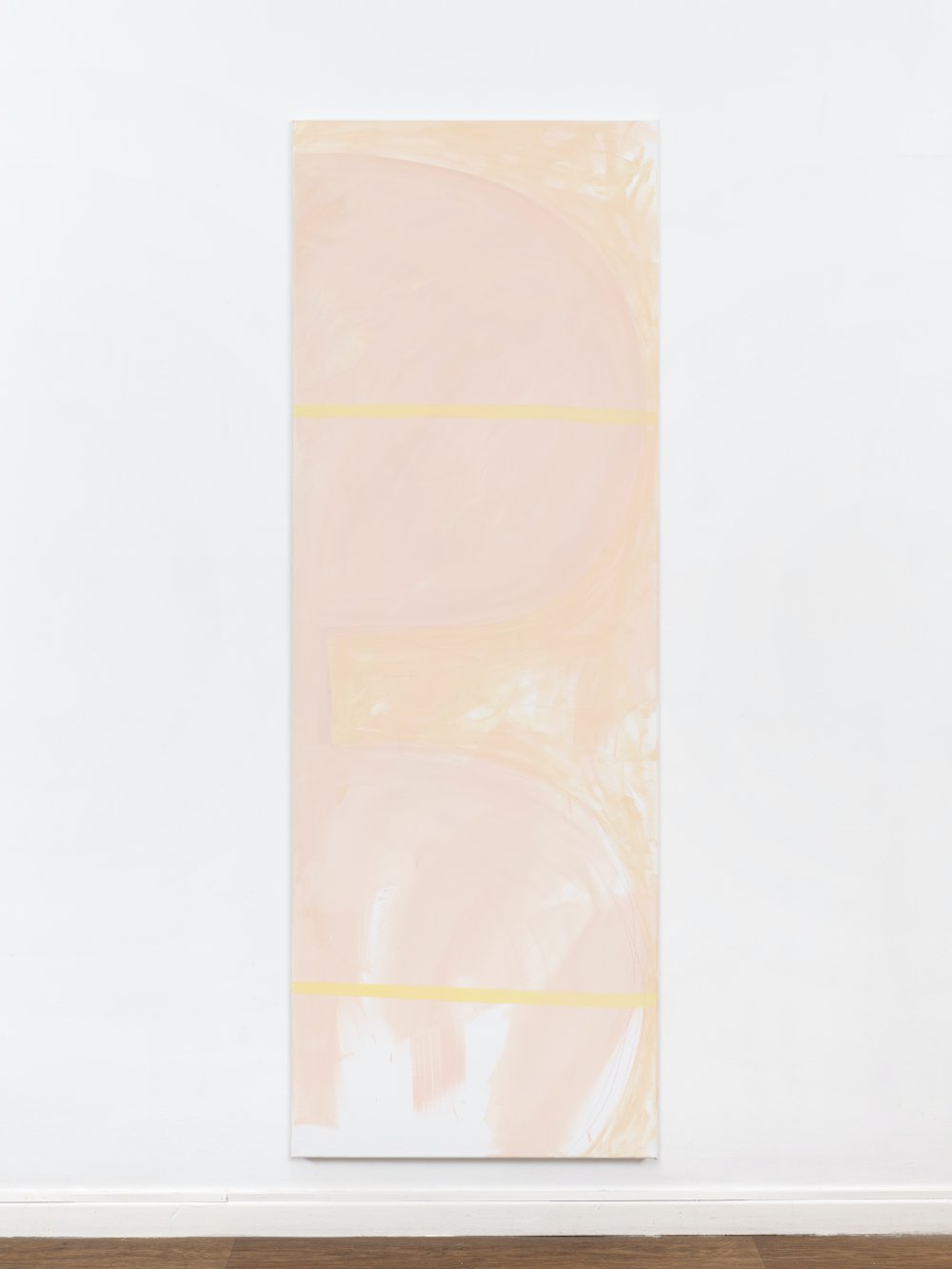 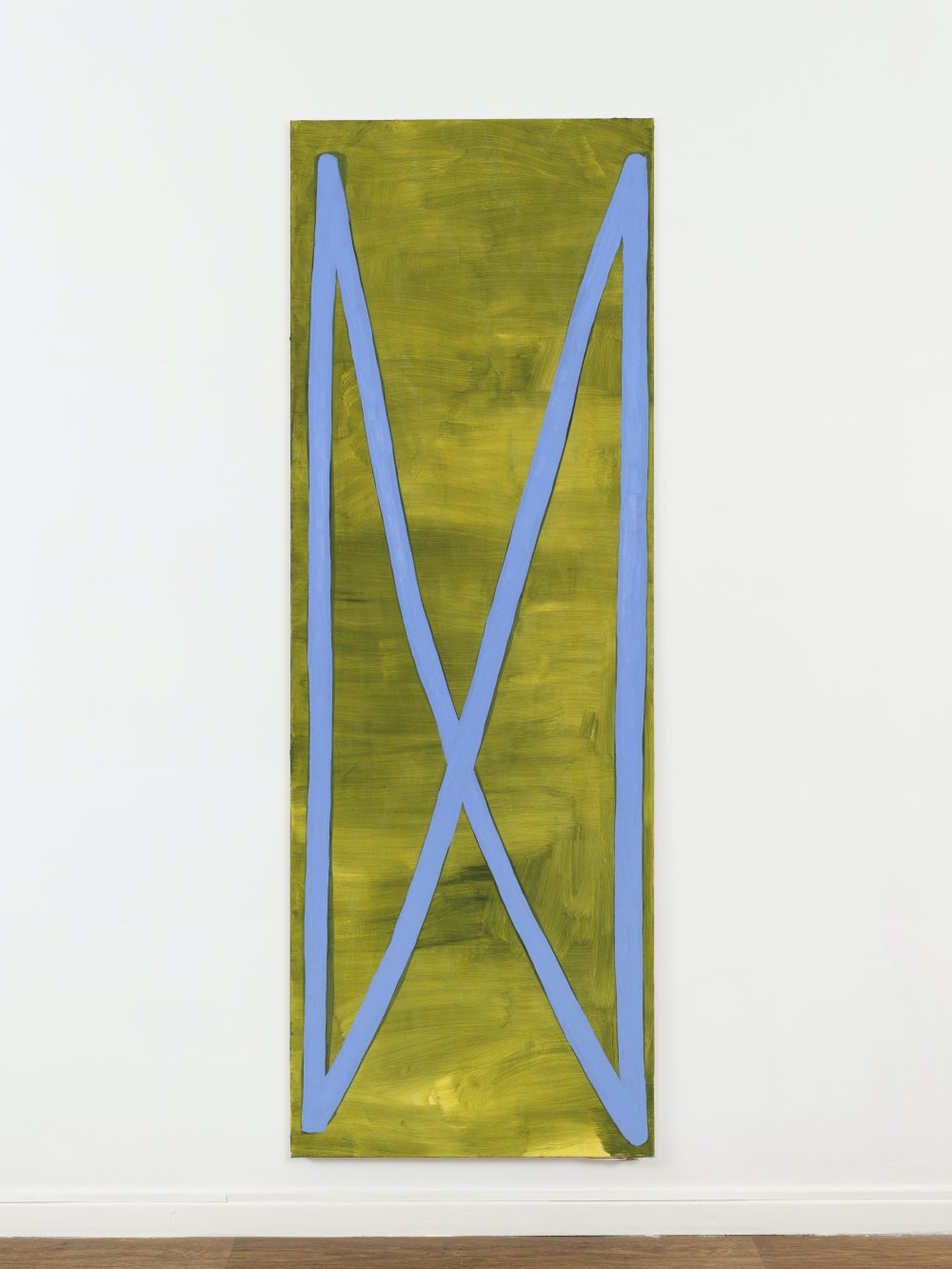 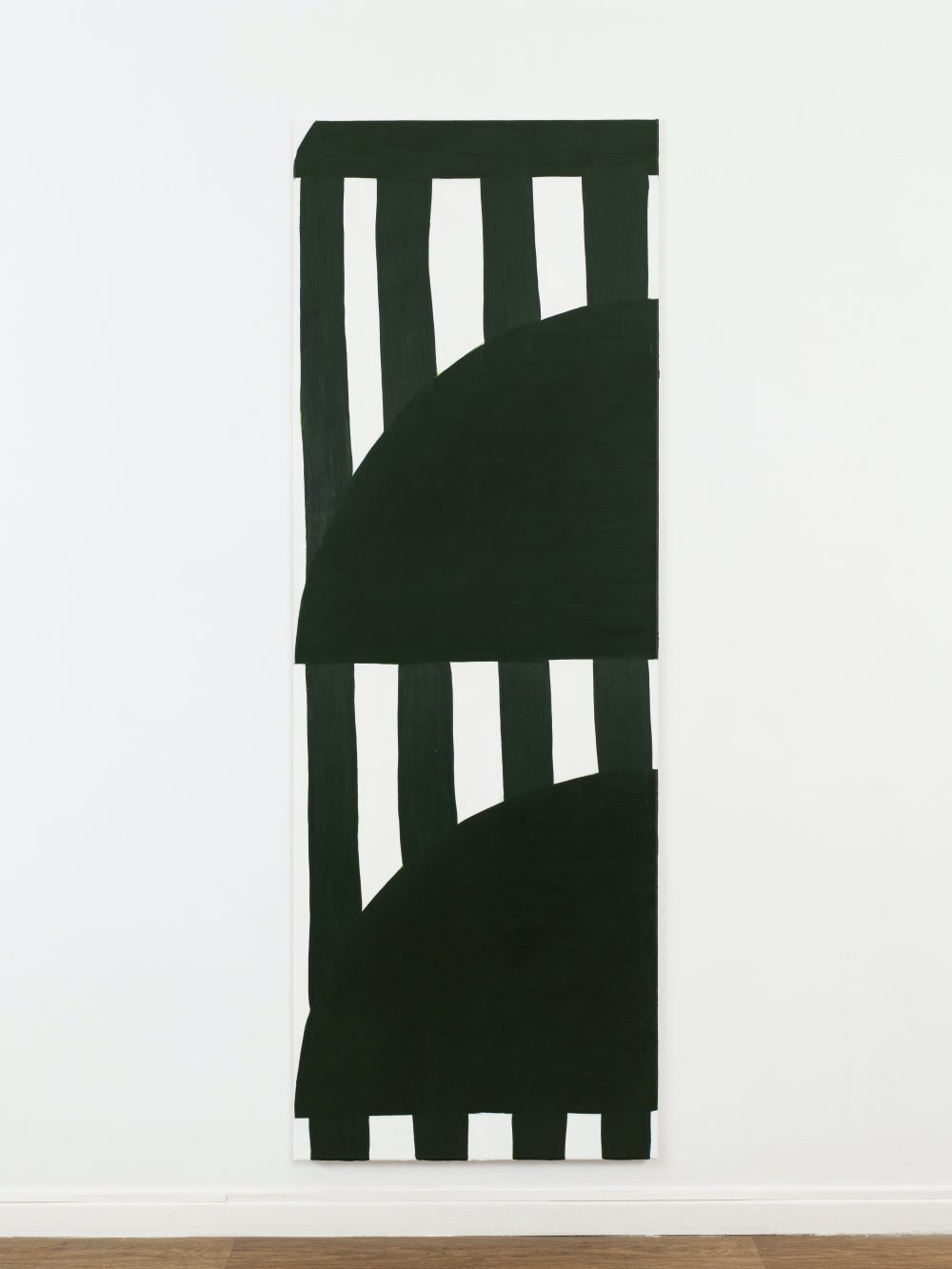 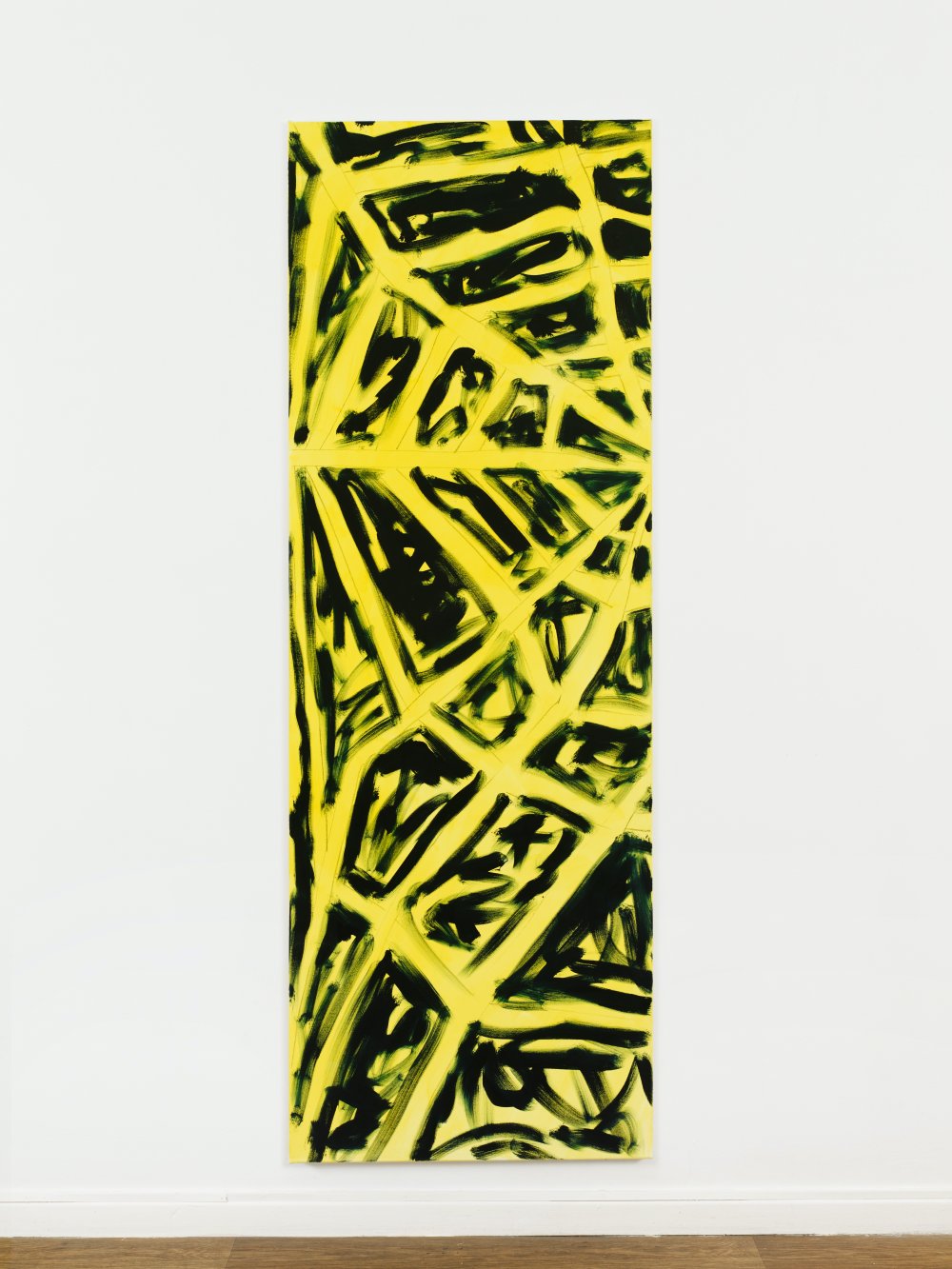 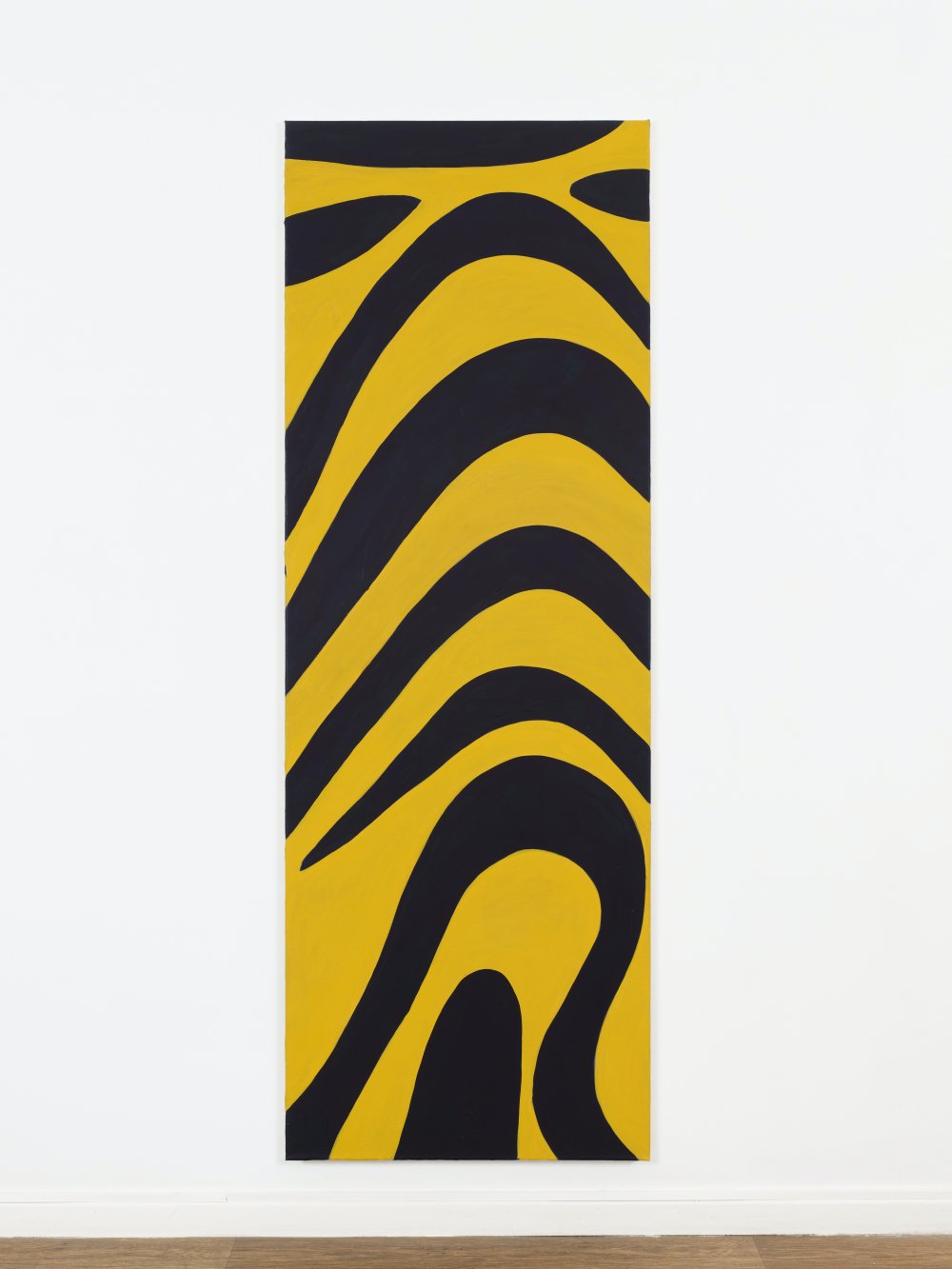 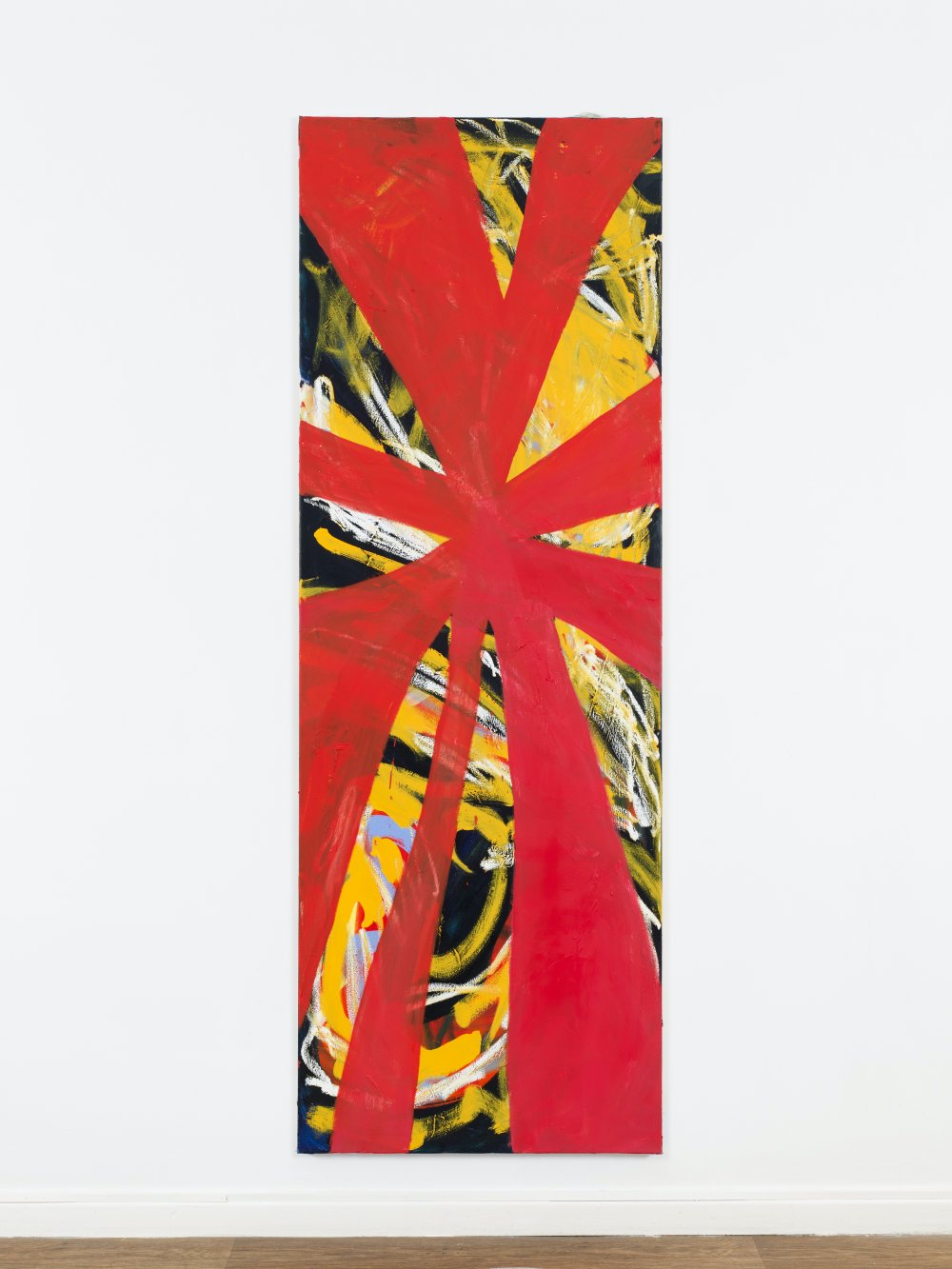 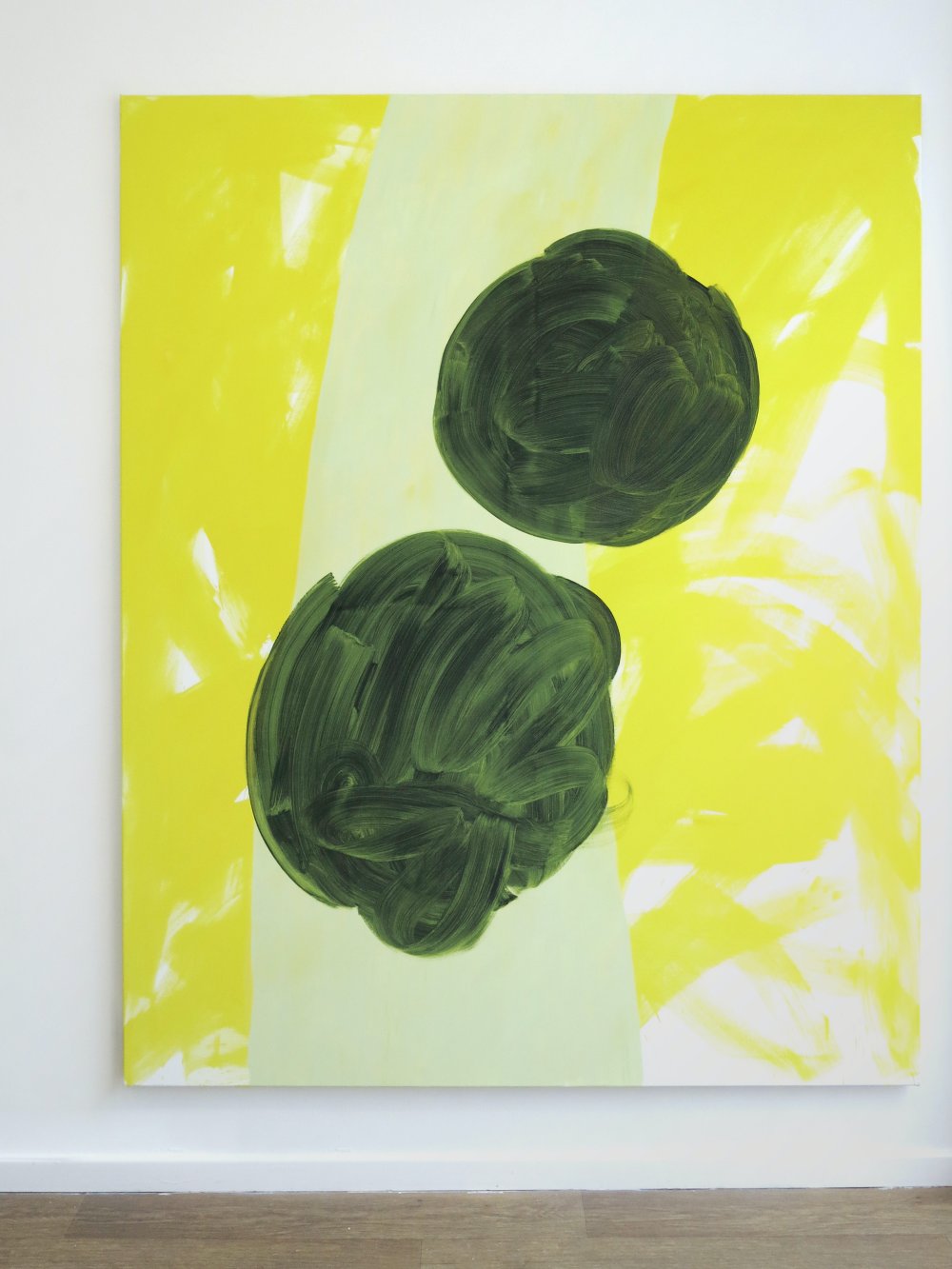 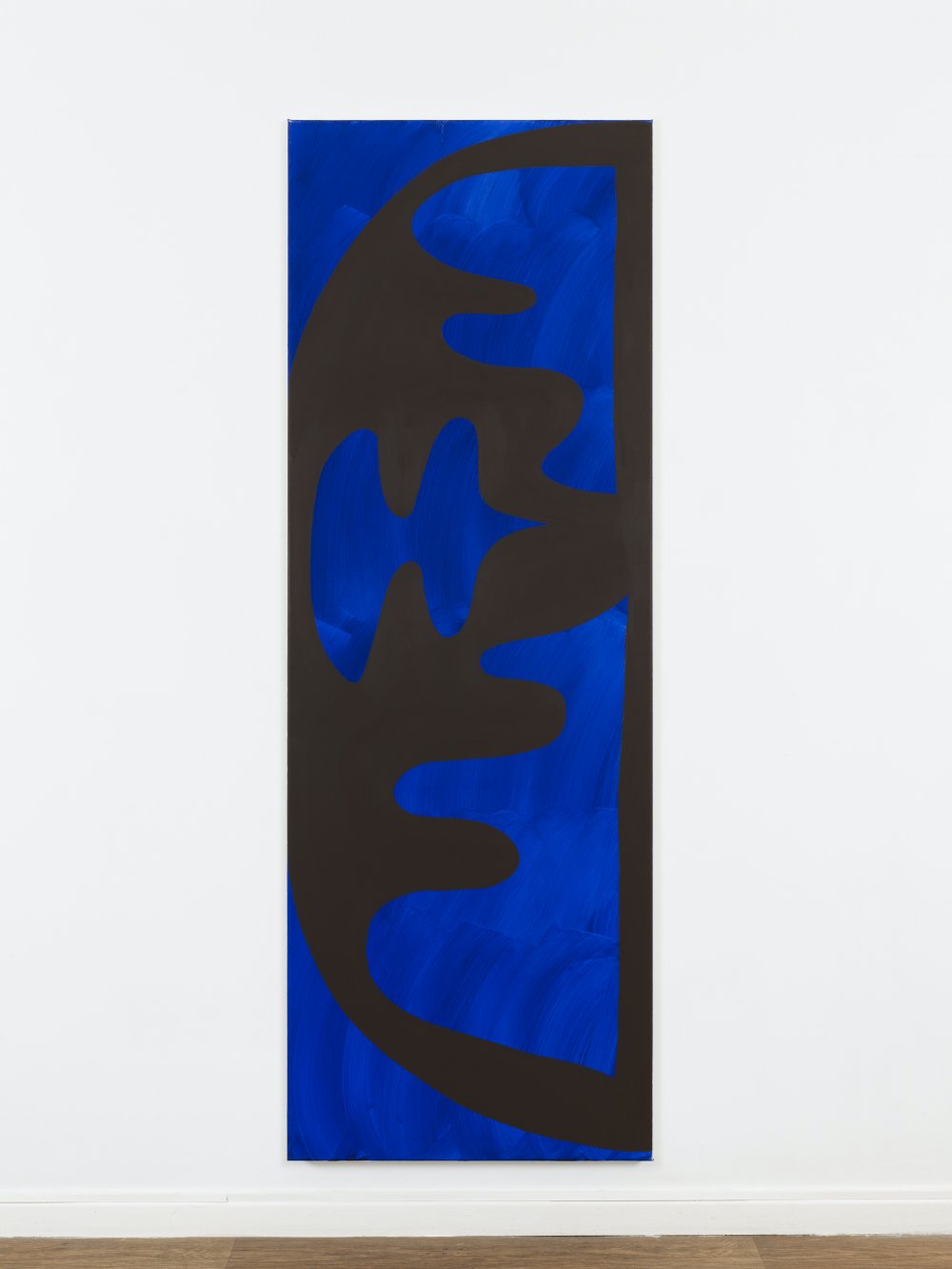 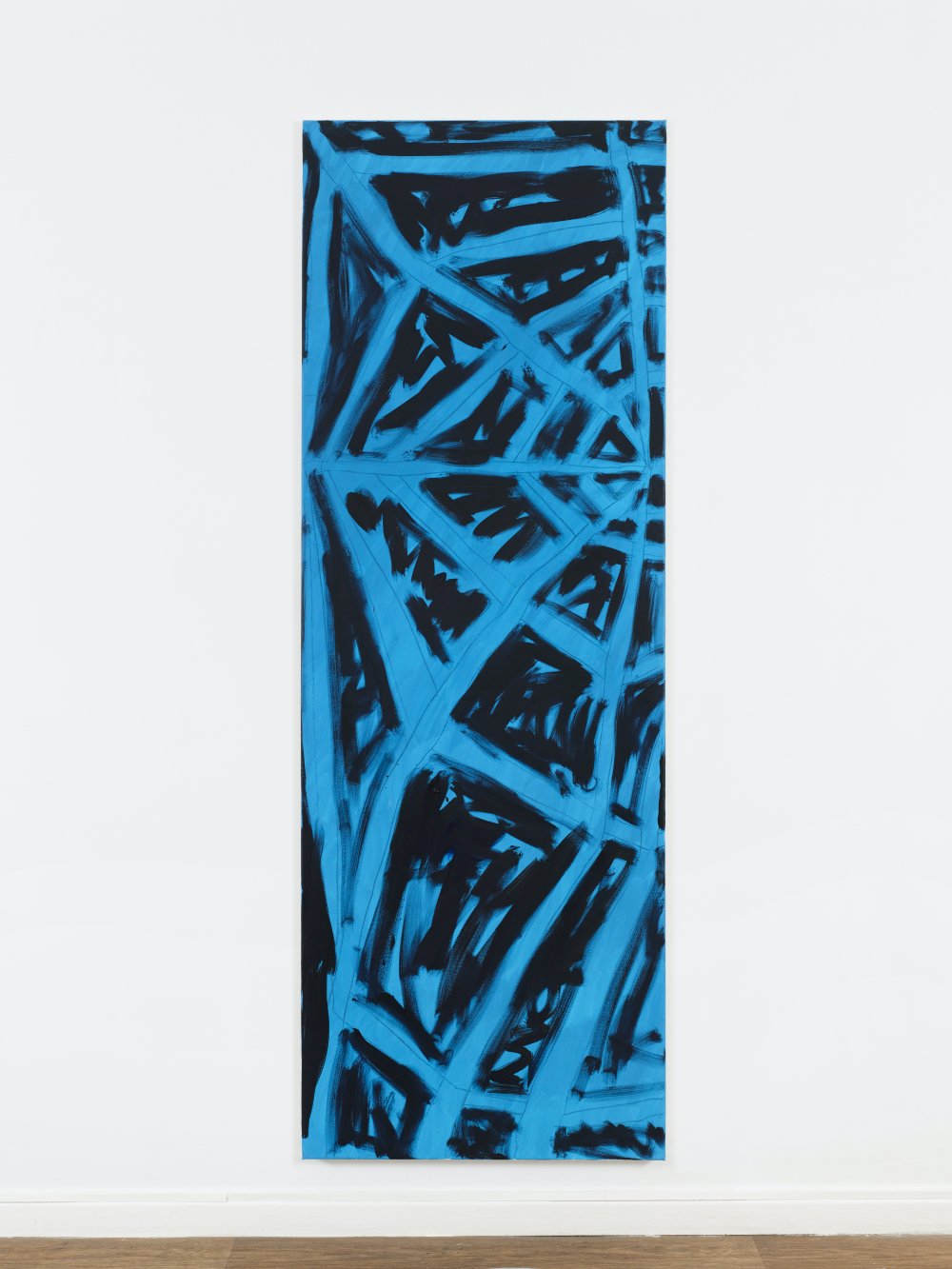 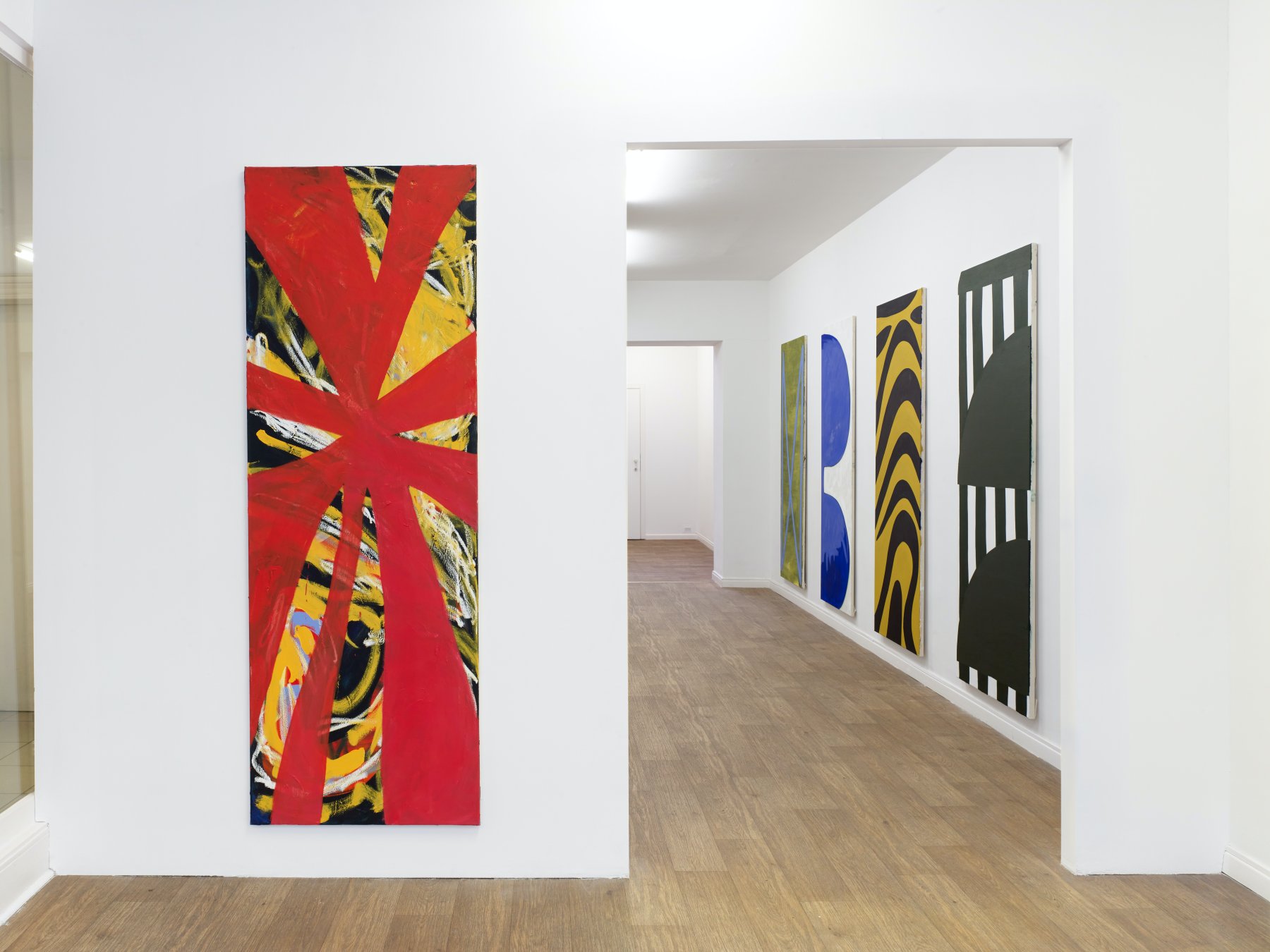 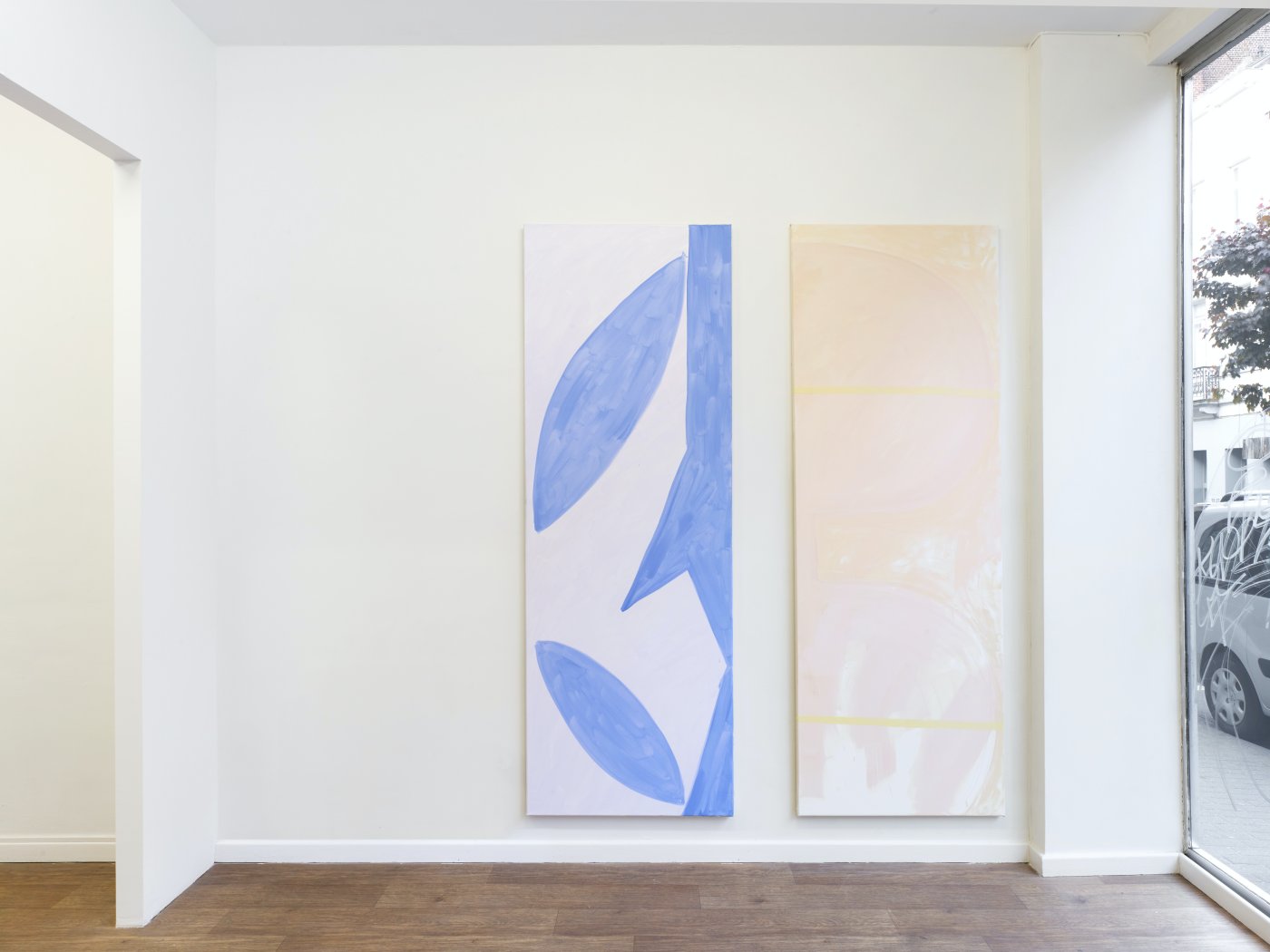 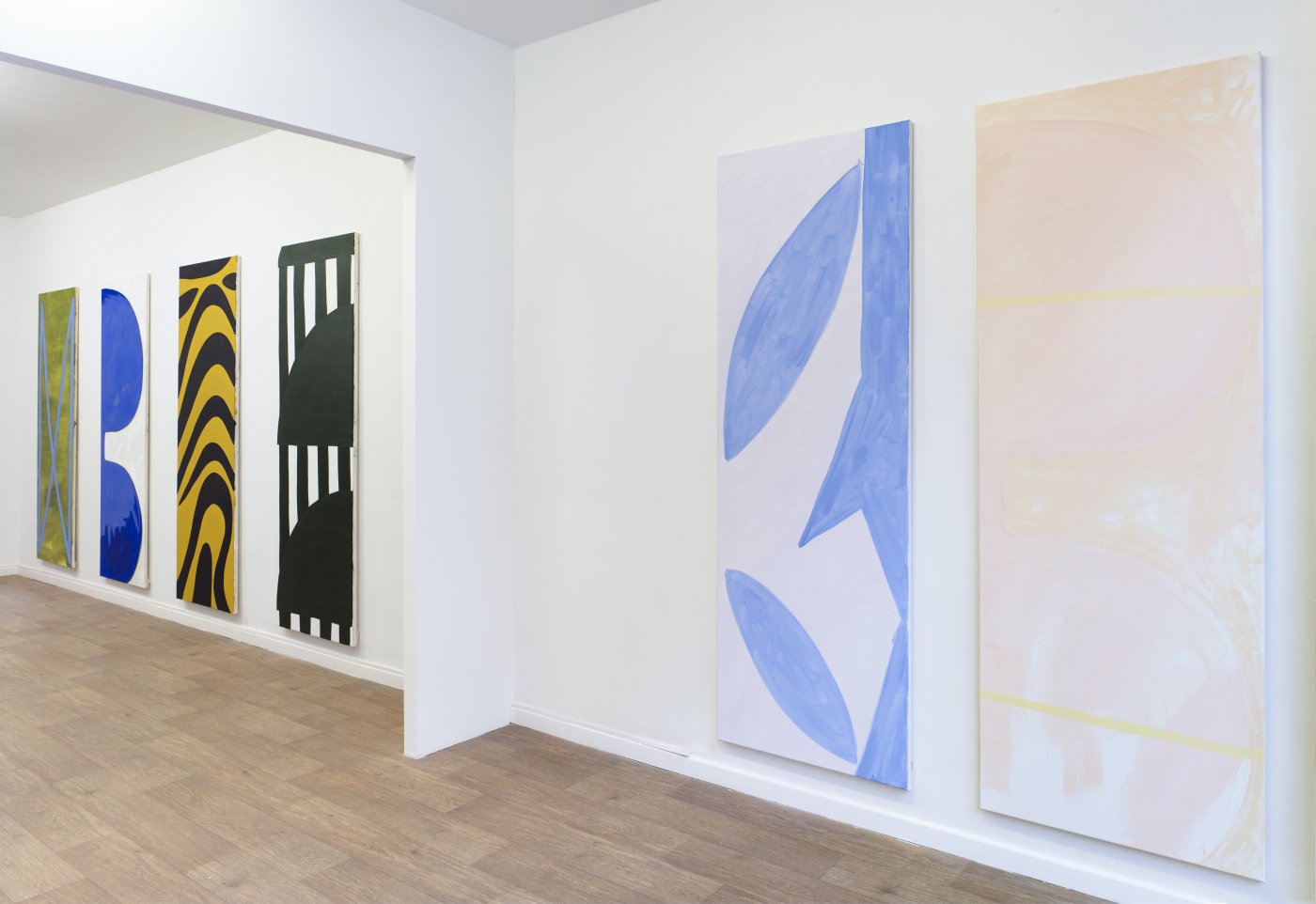 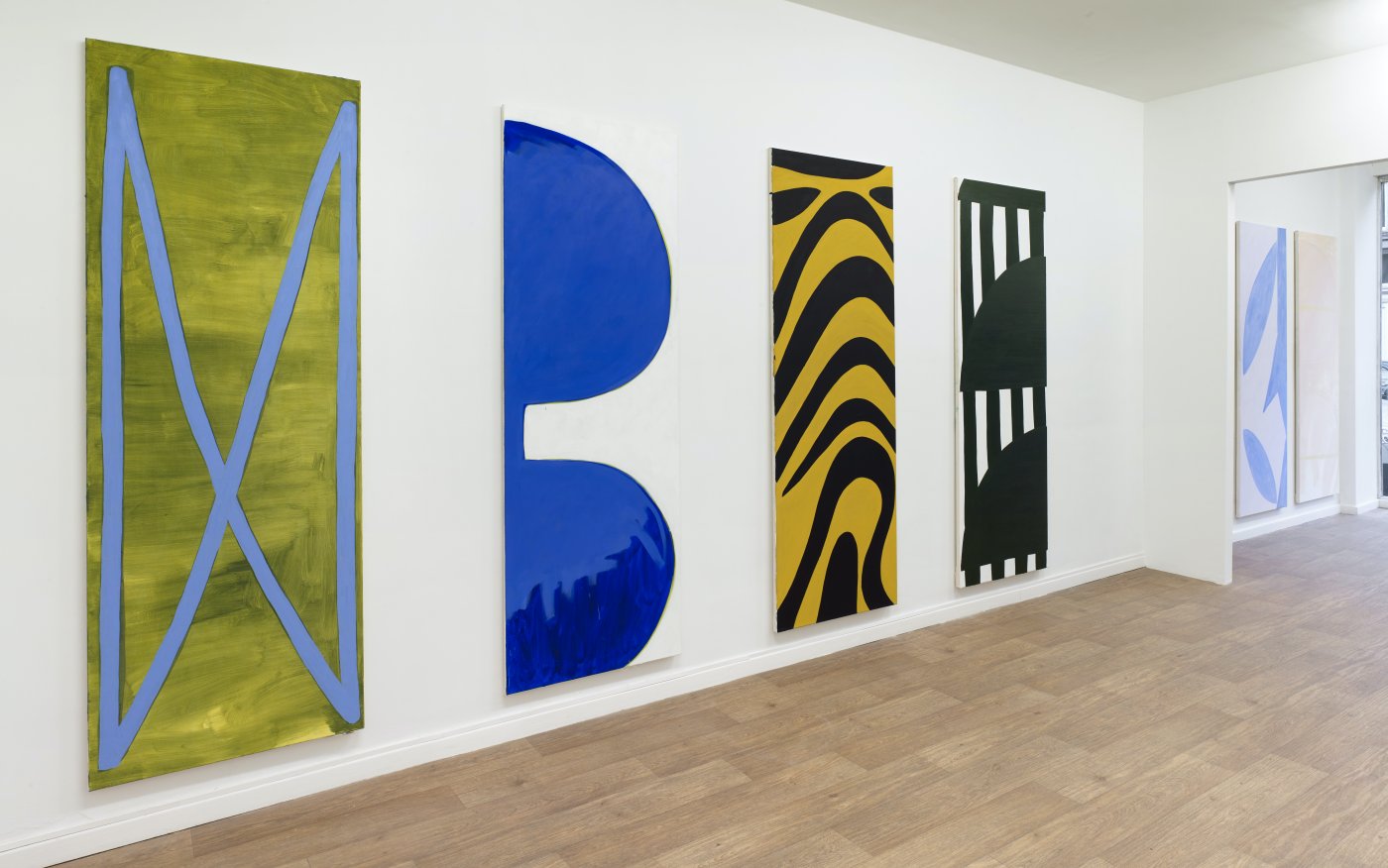 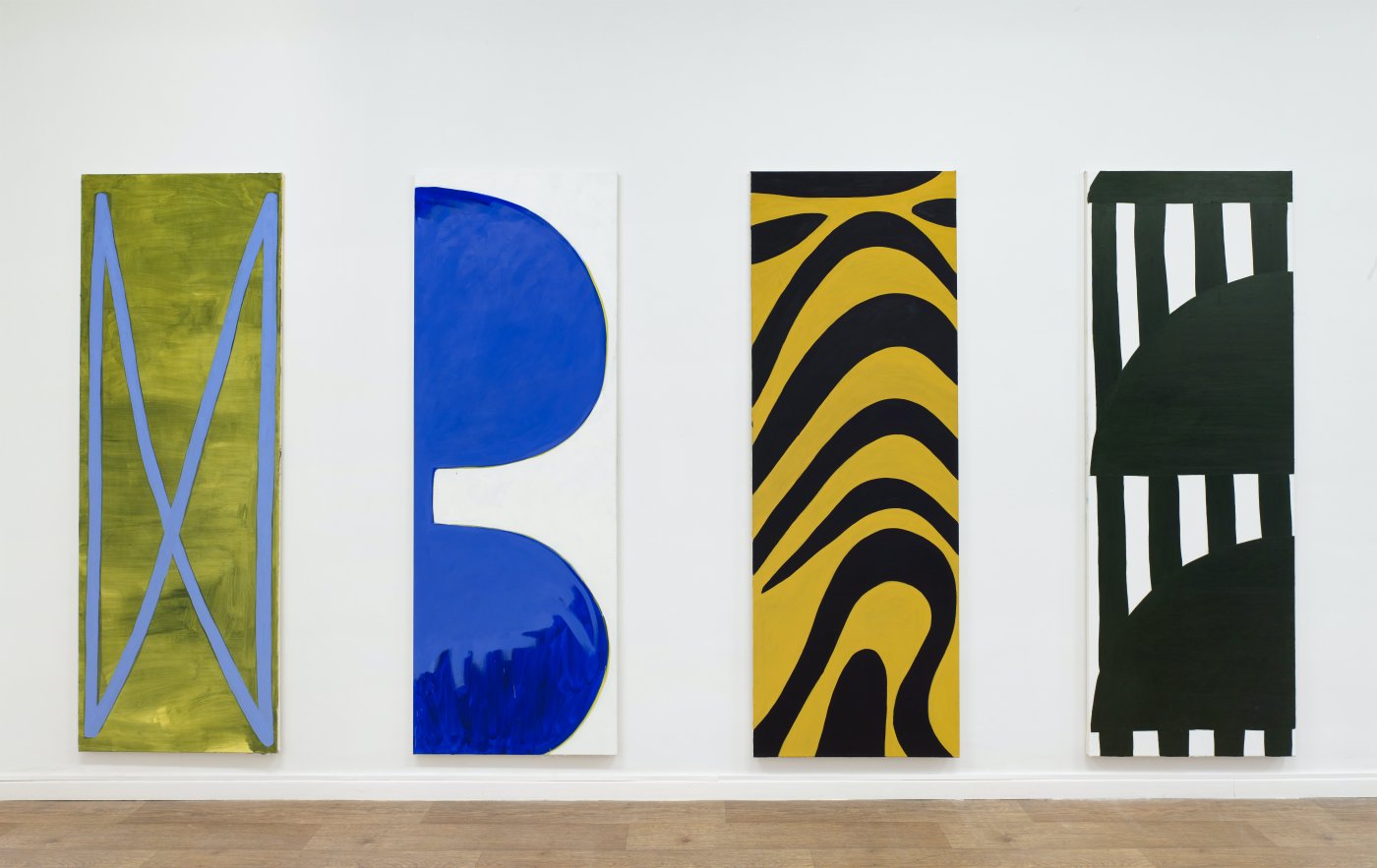 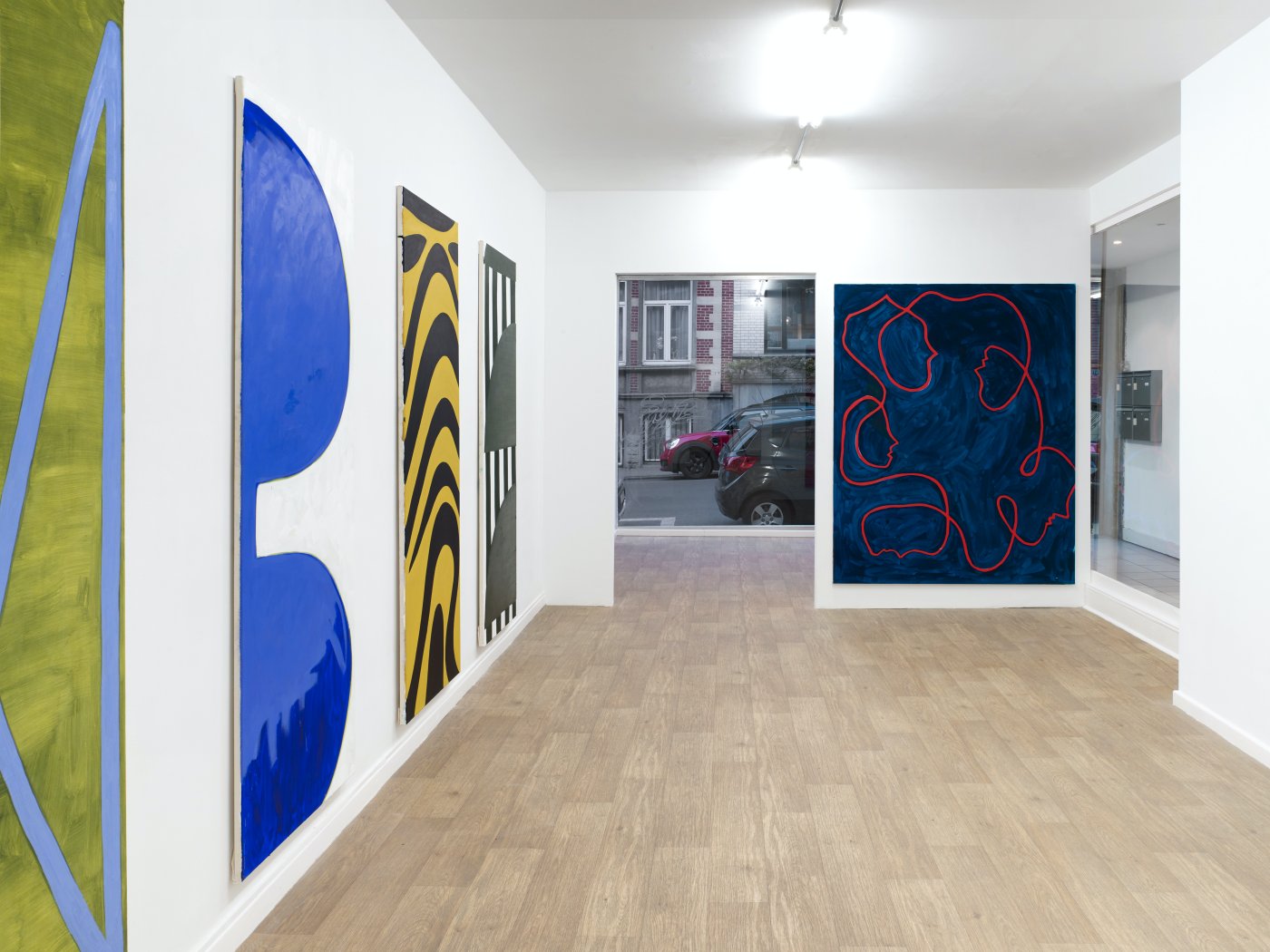 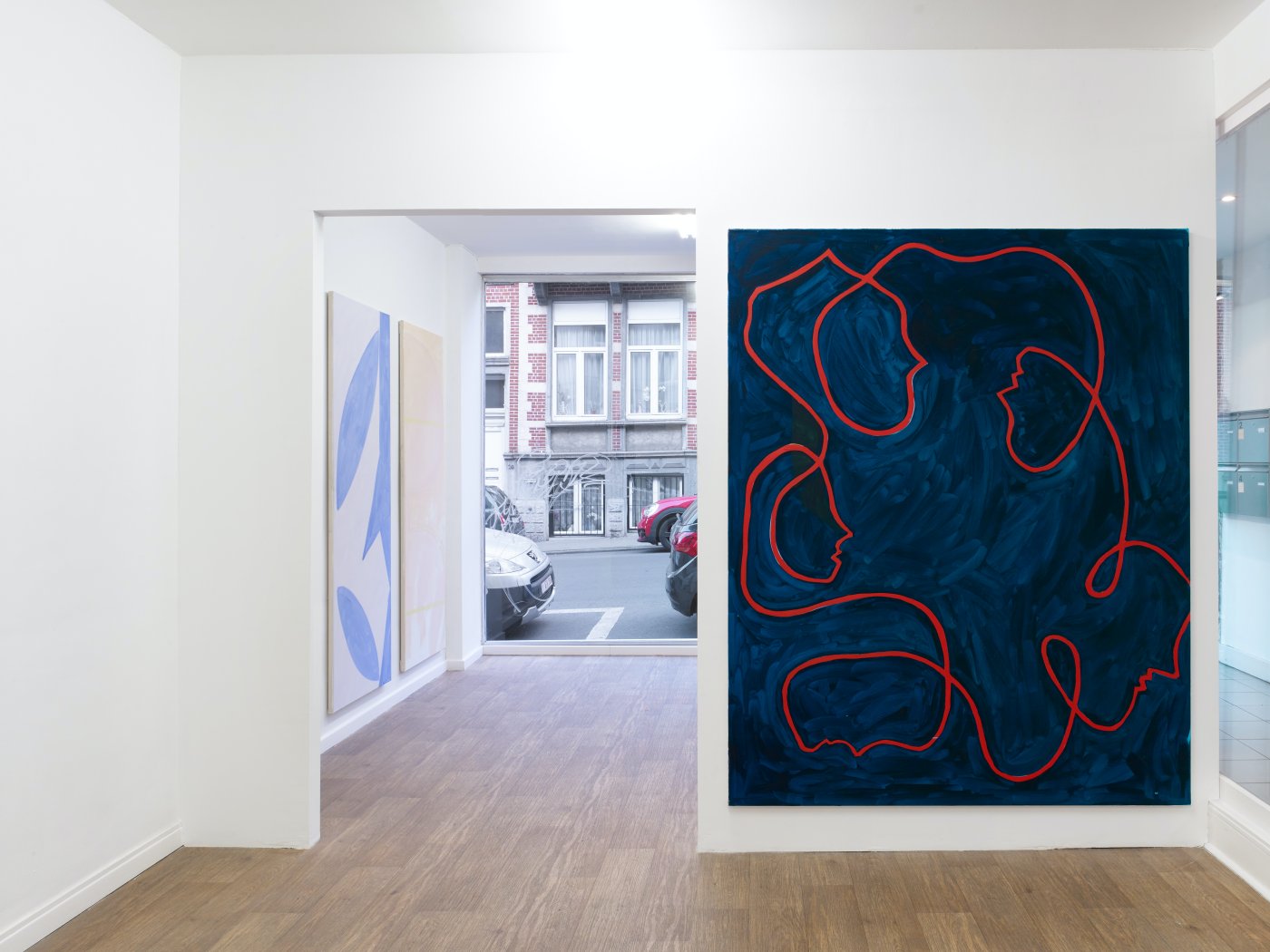 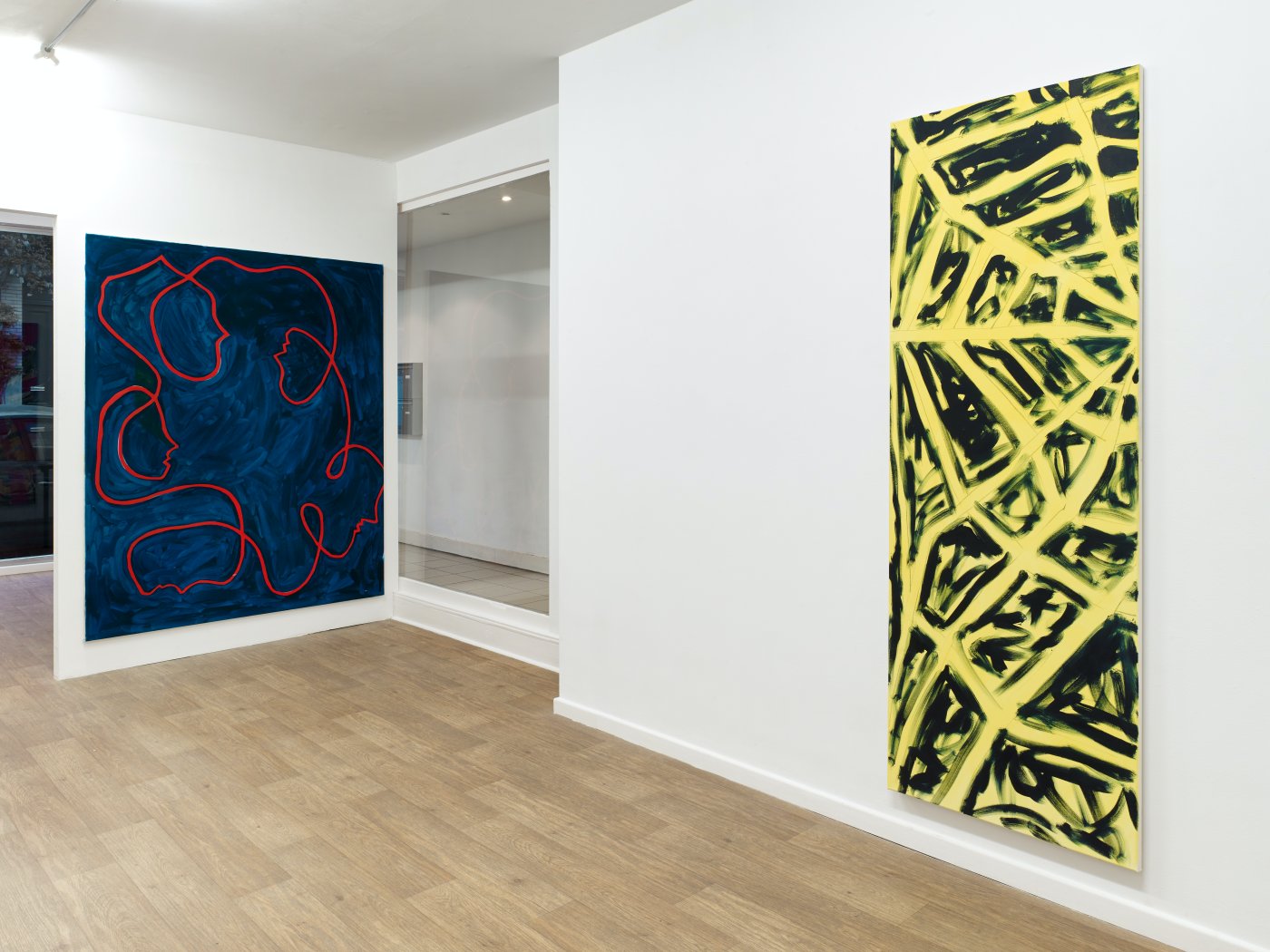 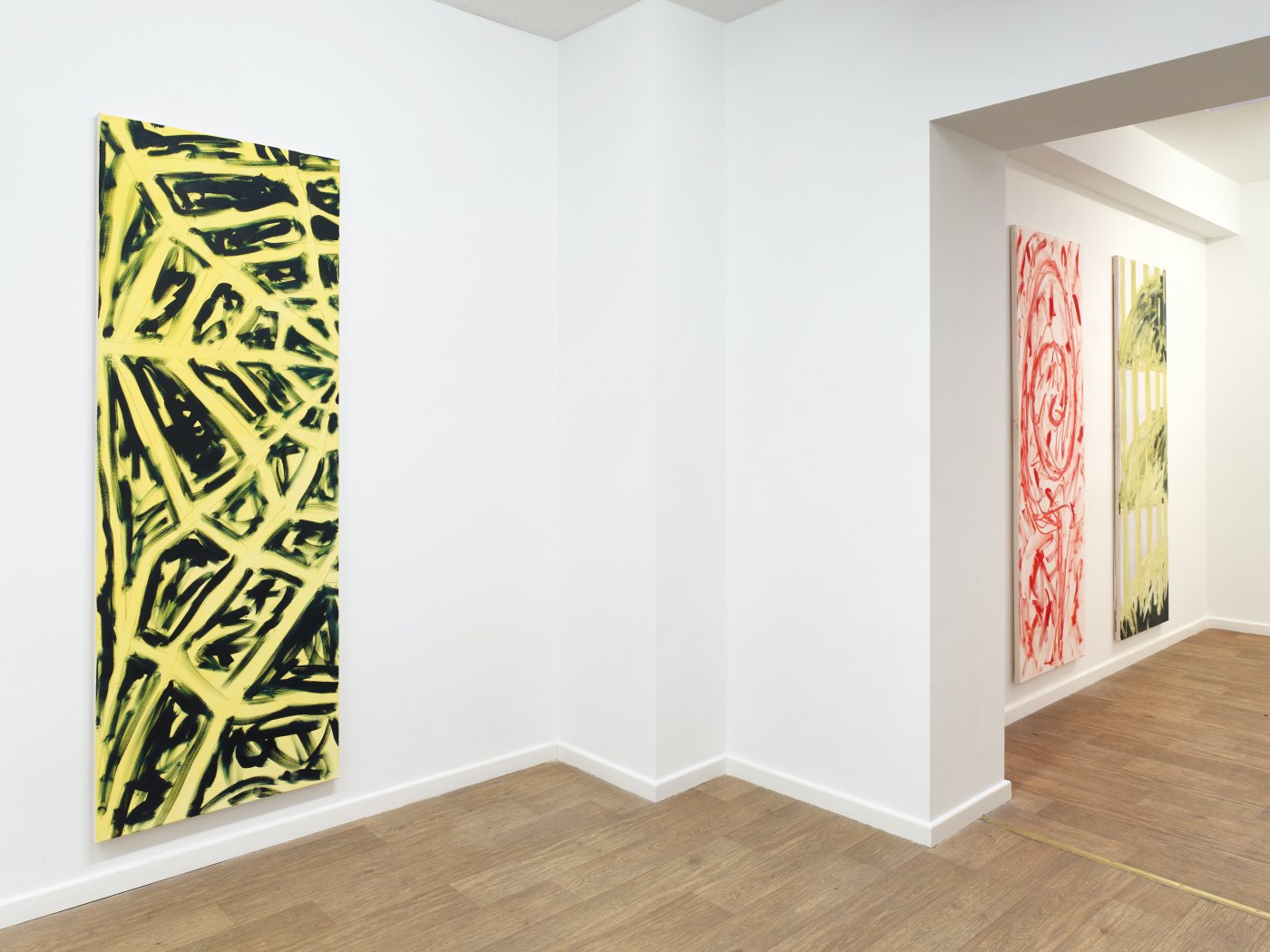 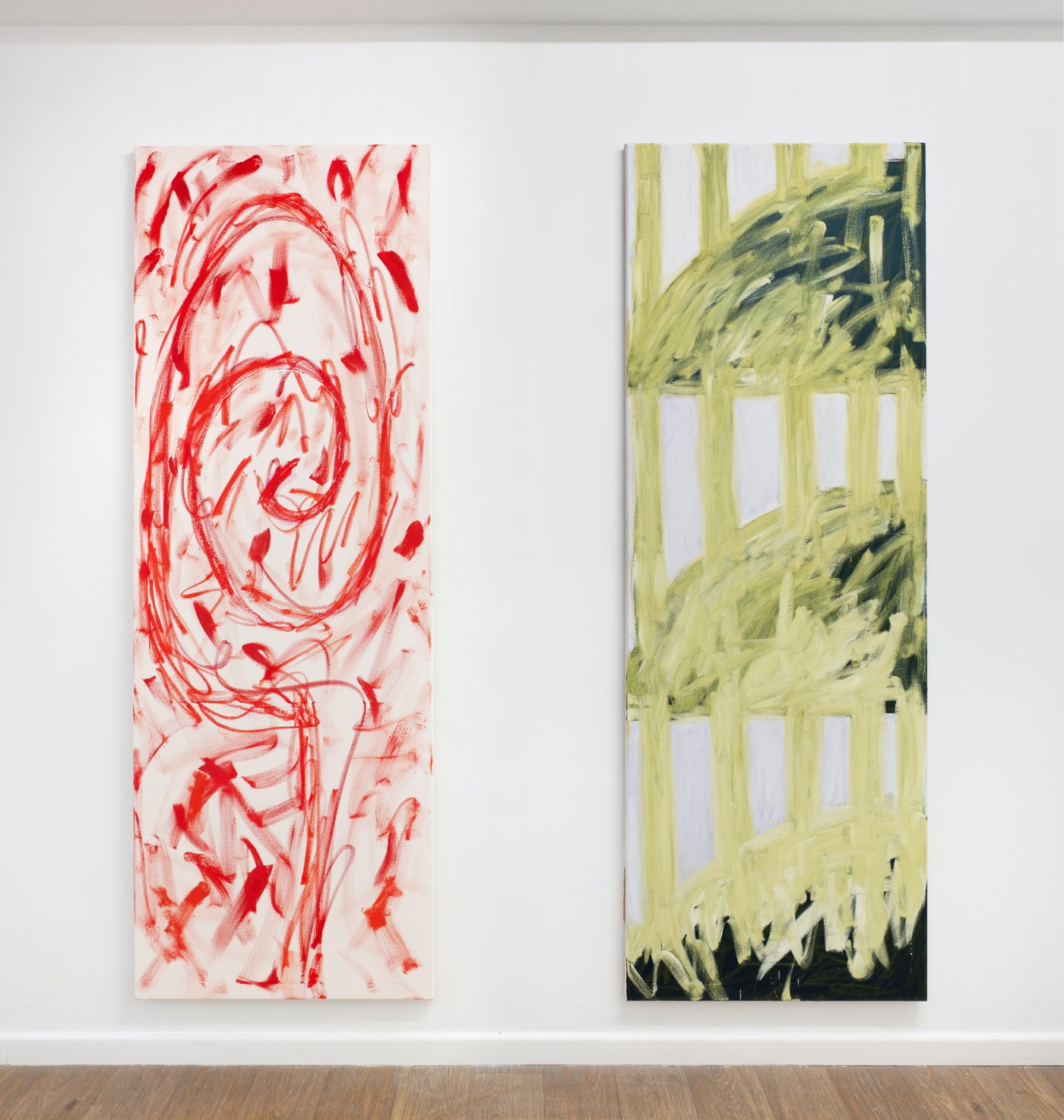 BIG NATURALS is the banner for a loose group of paintings formatted to suggest doorways or coffins in today’s crypt, the mall. The paintings circle the space at Damien & The Love Guru in Brussels to form a cadence, acting as a Book of the Living, a wink to the Egyptian Book of the Dead, comprised of collectively written funerary texts and spells that would be placed in the coffin of the deceased to assist them into the afterlife. In this hypothetical Book of the Living, Vanessa Disler considers contemporary rites, such as botox or fillers using hyaluronic acid, as a kind of embalming for the living(4). Fragmented shapes conjure body parts, the messy feminine, and nature.

Bravado is needed to execute the BIG NATURALS paintings. I have often wondered how the paintings look so natural or spontaneous, seemingly performed without a rehearsal. In a recent conversation with some friends about the process of painting versus drawing, Christian(5) describes getting ready to paint as warming up the paint, whereas I related the soothing energy of the process with the sensation of petting a cat or sweeping the floor. Simon adds that it sounds like we are describing “pre-strokes”. Disler’s pre-stroke warm-up consists of semi-automatic ink drawing – rehearsals turned into mineral dispersal; redrawing the same sketch over and over again, using ink on paper, towards forming an energetic signature once these marks are translated to a larger scale using colour. And after over a year of reduced mammalian contact, paint on canvas takes on an erotics of foreplay. I finally understand (do I?) why the public imagines painting as a sexy medium. Not unlike other fluid or compressed substances for dispersal (like lipstick, eyeliner, mustard, ketchup, mayonnaise.

Condiments, coincidentally communal, like painting, resonate with Disler’s current Munch-esque palette). The mark-making sashays between exquisitely precise motions, reminiscent of perfectly applied liquid eyeliner, to grounds doused in phthalo blue, or as in Disler’s biggest painting in this series titled Conversations with Friends, a continuous contour in viridian red, where every looping profile features a ski slope nose.
In NuFace Techno Trance, titled after a cosmetic electrotherapy device, a fragment of a spiderweb is drawn with charcoal on a backdrop of a cadmium tabloid yellow. The absent figure in the story of this painting is the black widow, symbolizing femininity, sexual power, femme fatales, and untamed personas. The hairy follicles of the spider help them sense electric currents, to tune in and fly. The desire to touch in painting is a desire for communion. Disler adopts the brush as a GPS wand for returning to wild intuition.

I ask Emily, a casual Kardashian scholar: Are they naturals? She replies: “Also ARE they big naturals??? Kims are, or at least they were, in my opinion, Kourtney’s aren’t, but they never stop manipulating.”

The longest wall in the gallery features a striking sequence of paintings where breast shapes are stacked vertically and interspersed with rave club undulations or fragments of leaves and other crusty abstract symbols. The painting Big Naturals, renders two large ultramarine cupped forms bridged together almost like a bra. In Peace on Earth, the breasts are rendered in a pink, resembling the nipple on a baby bottle. Narrow bands of naples yellow cut across engorged breasts, though the bottom half sphere is in a state of unrender, where brush work shifts from a clean solid ground to its dissolution within the canvas, either through scattered marks or a sense of wiping the brush clean.

These movements mirror the process of becoming, emphasized by unfinished fillers—dissolving colour contained within bold shapes.

Pigment or polymers extracted from the earth make up both oil paint and cosmetics – the main difference being in the binder that makes this powdered substance slippery and able to grip a surface. Current cosmetological trends market these mineral tubs of lip and face illuminators, straight up, as paint. In ancient Egypt, eye make-up had magical properties beyond cosmetic ones(6). They were shields. Drawing kohl around the eye conjured the eye of Horus. After a baby was born, mothers applied kohl to the infant’s eyes to ward off curses of “evil eye”. Kohl was also prescribed to prevent eye diseases, for disinfectant qualities, to shield the sun, to deter flies. If there is a connection between kohl and the spider’s web, it is in the ability to attract. Make- up, like the web of spiders (human and insect alike) are delicate and sticky semiotics—threaded portals between life and death, between the living body and the synthetic worlds. In Death and the Maiden, Hannah Proctor cites a 1925 article in the New Yorker, describing the archetypal and heavily made-up artificial flapper with “poisonous scarlet lips, richly ringed eyes” adding “the mask of womanliness is also a death mask”.

As Disler passes through this world, BIG NATURALS is a meeting of life with death, in the journey between everlasting firmness to firmament. Working with painting on a support is to be attentive to the inherent alienation that happens when experience and stories are translated into two dimensions. The trick to be- ing natural is that it takes a lot of prestrokes, that is, rehearsals. Hegelian obituaries about the death of painting have been misguided by the writers who take it there – painting has the potential to slow down and be a guide for the living. Every time someone paints a line around the parts of their face, or follows the desire to make a painting – it is a comic/tragic demonstration of thinking, grief and longing.

1) A thirst trap is a type of social media post intended to entice viewers sexually. It refers to a user’s “thirst”, a colloquialism likening sexual frustration to dehydration, implying desperation. Originating around the early 2010s, the meaning has changed over time. – wikipedia.
2) Emily writes me “Mom takes me past the Fountain of Neptune: it’s peak is the Maserati trident, but that’s the vanishing point for me. I never noticed Neptune. I am filming the mermaids, milky cylinders firing at eye level. Texting my mommy friends the mermaids. Fuck Neptune / sorry mommy.”
3) Article by Magdalene Taylor. The first mention of Big Naturals occurred in Urban Dictio- nary by Douche man Dick January 24, 2009.
4) I’m 7 with my family waiting for a flight from the Punta Raisi airport. I notice a postcard
of a little girl. I think she’s cute. A burnt pink bow adorns the top of her head. At first I don’t realize she is mummified and sealed under glass. The back of the card says her name is Rosalia Lombardo, the last person to be embalmed at the Catacombe dei Cappuccini in Palermo, at age 2, death from pneumonia, after the Spanish Flu. Memoirs by her embalmer, Alfredo Salafia, note that he injected the body with a solution of formalin, zinc salts, alcohol, salicylic acid, and glycerin.
5) Artists Christian Vistan and Simon Grefiel.
6) https://fashionhistory.fitnyc.edu/kohl/#:~:text=When%20Egyptians%20wore%20the%20 kohl,the%20mum my%20in%20figure%201.