Vanessa Baird: Endings to a story that had no beginning

Vanessa Baird: Endings to a story that had no beginning

Vanessa Baird: Endings to a story that had no beginning
Fri 8 Jan 2021 to Sun 28 Feb 2021
temporary closure
Artist : Vanessa Baird 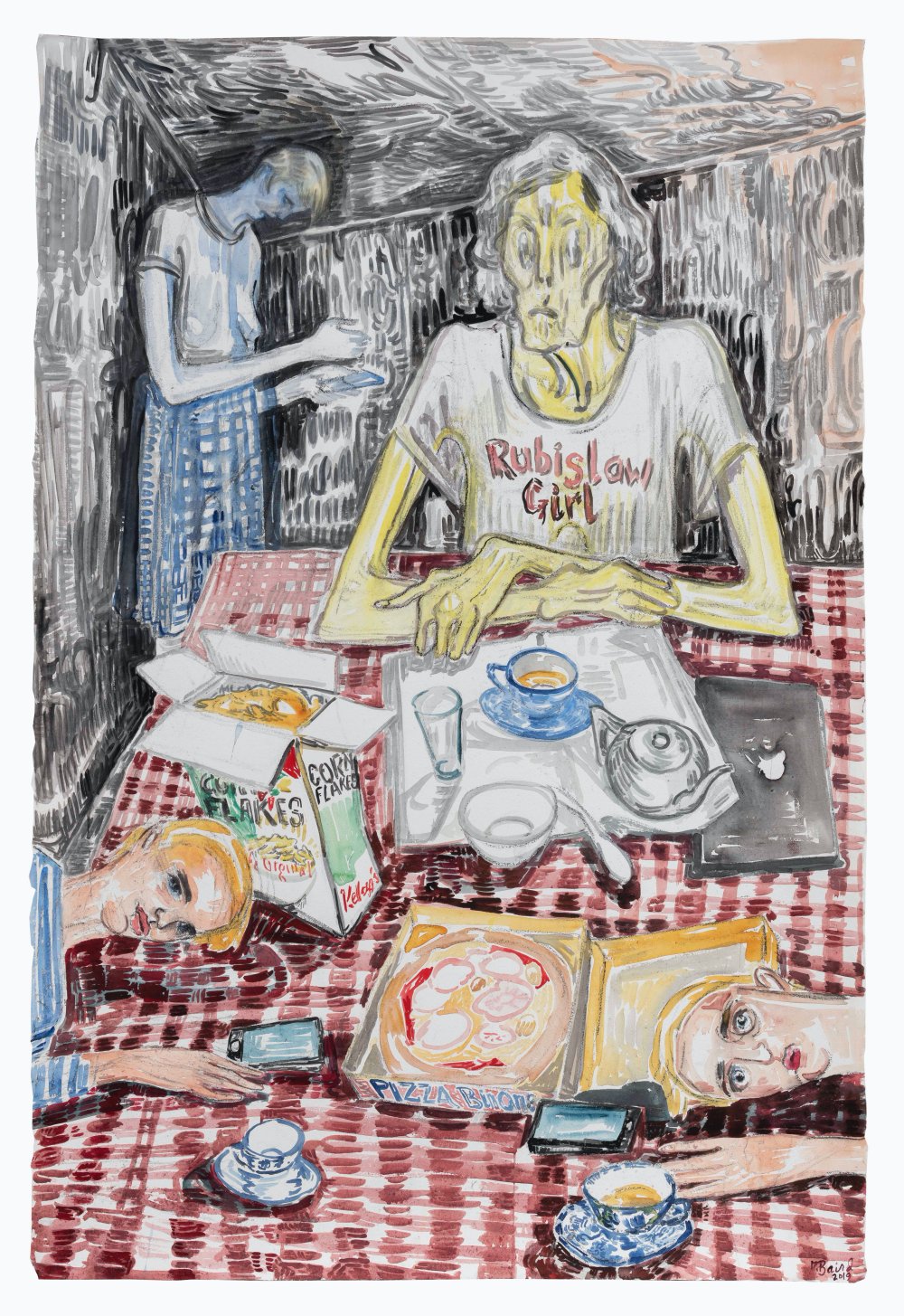 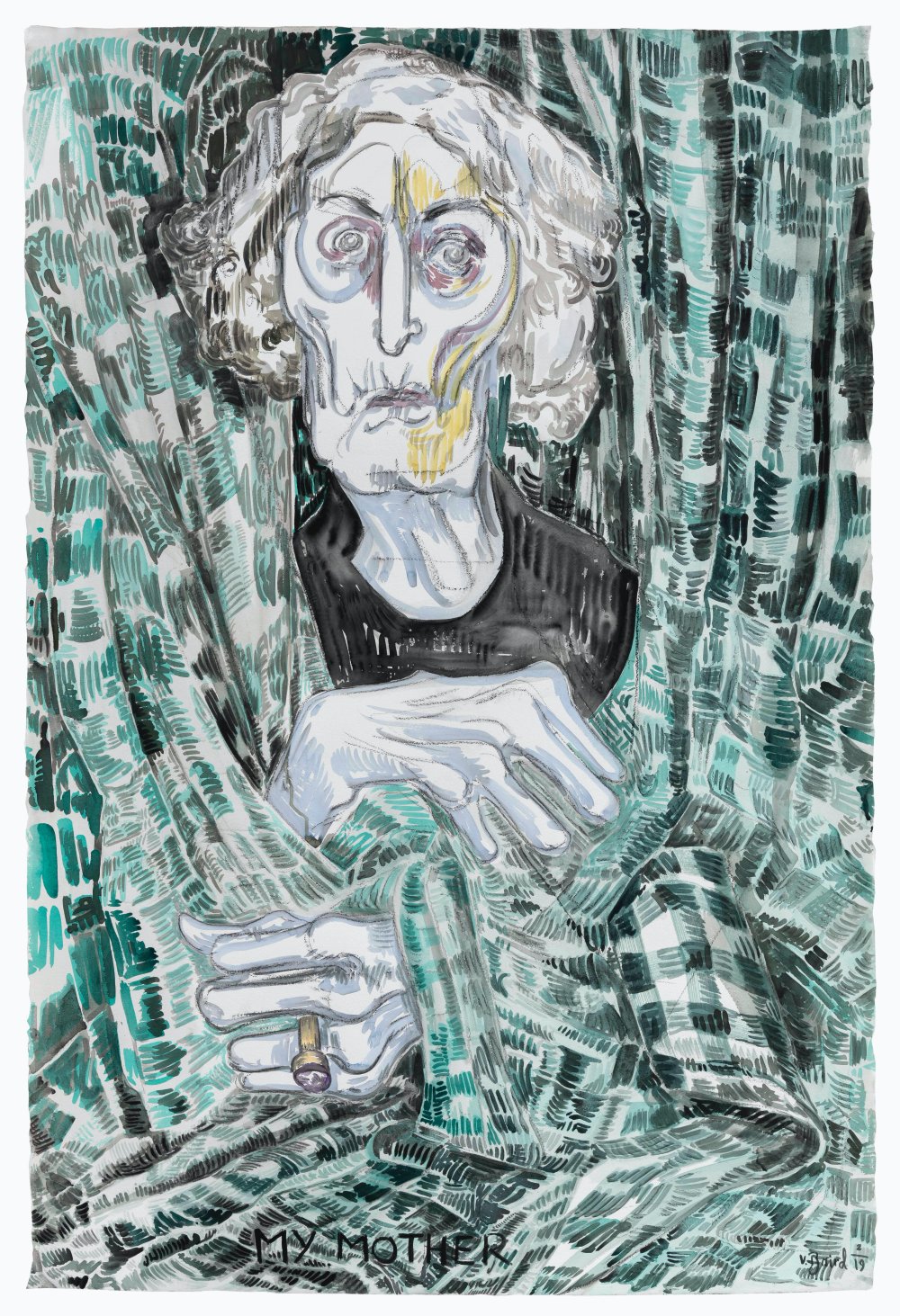 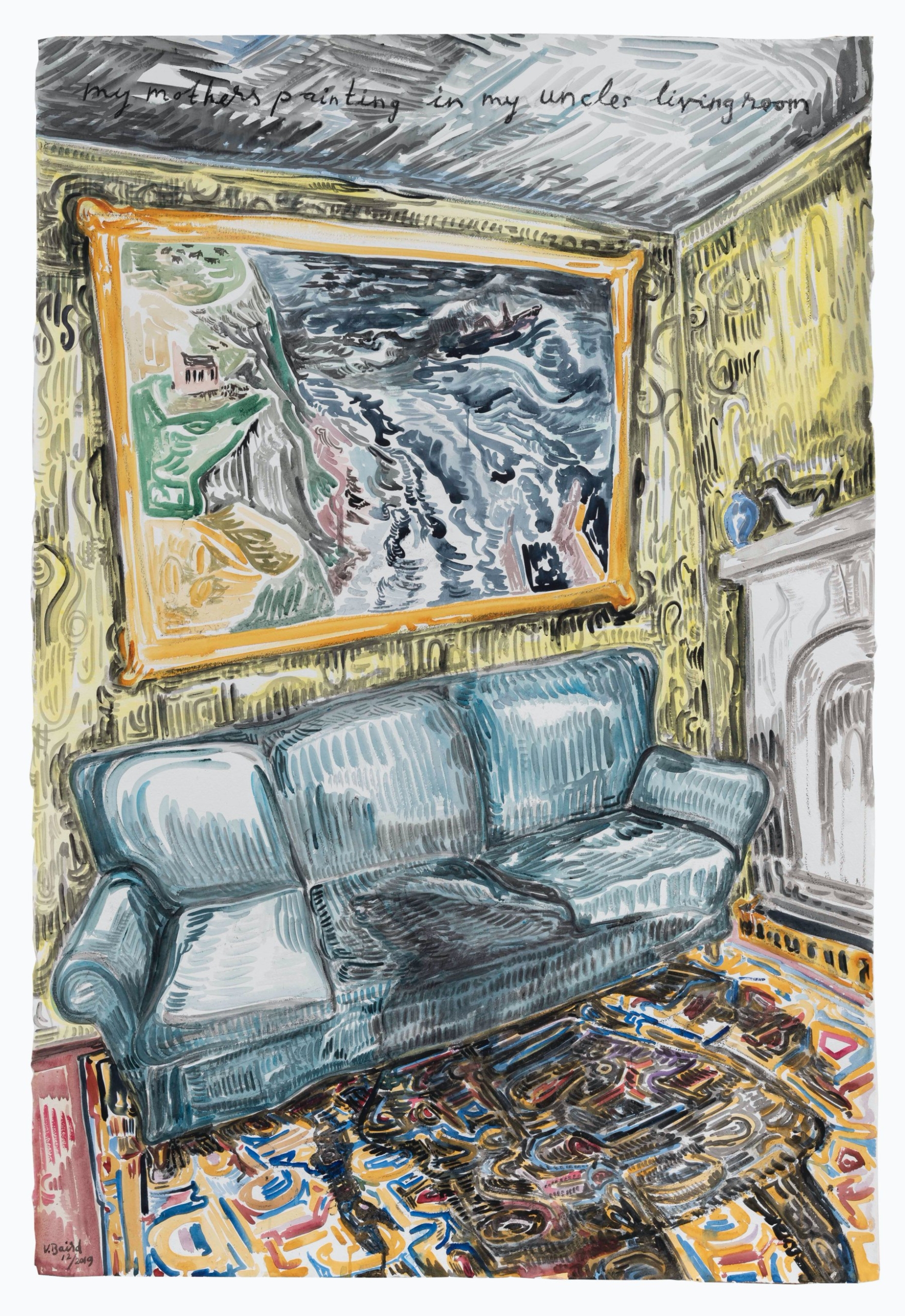 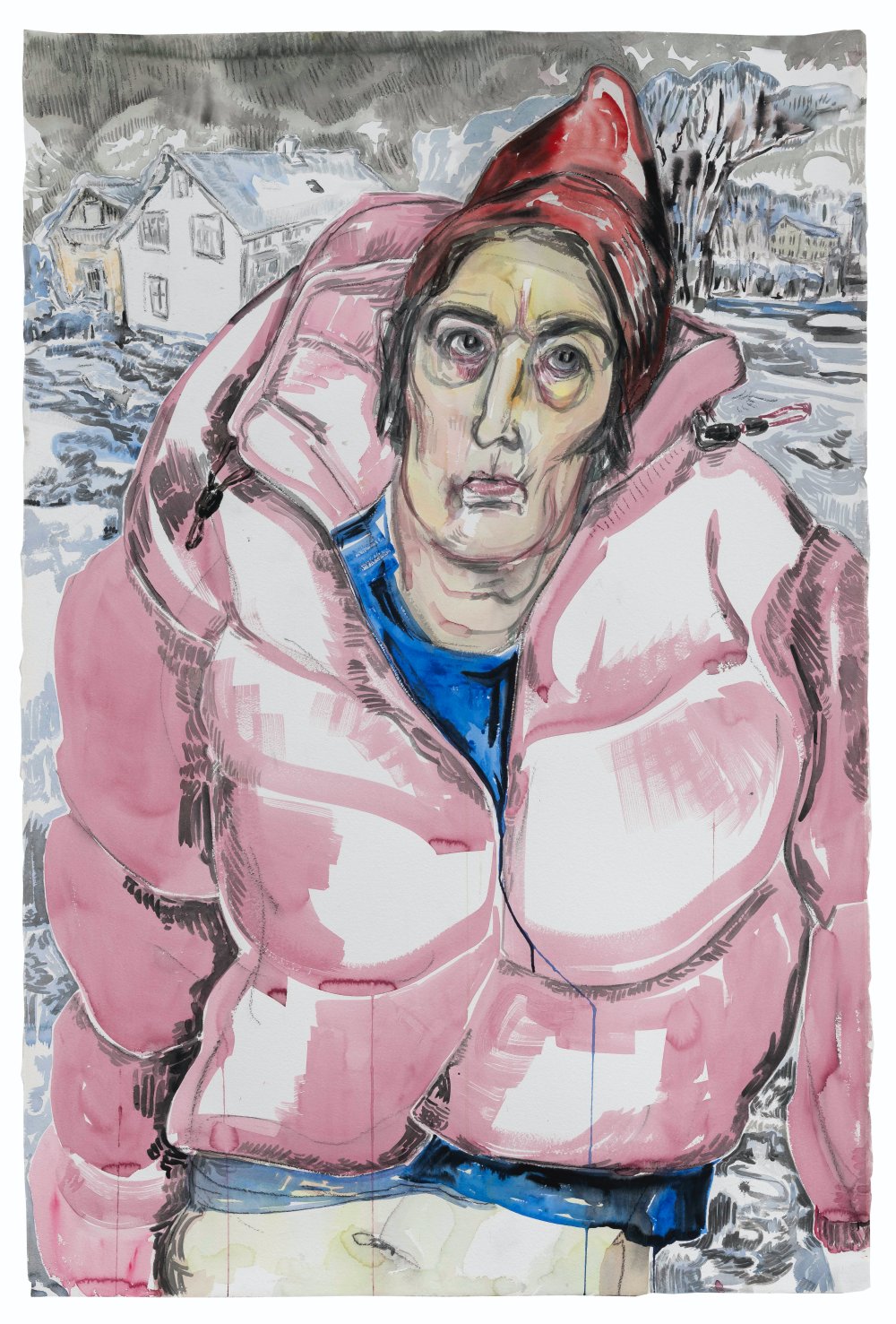 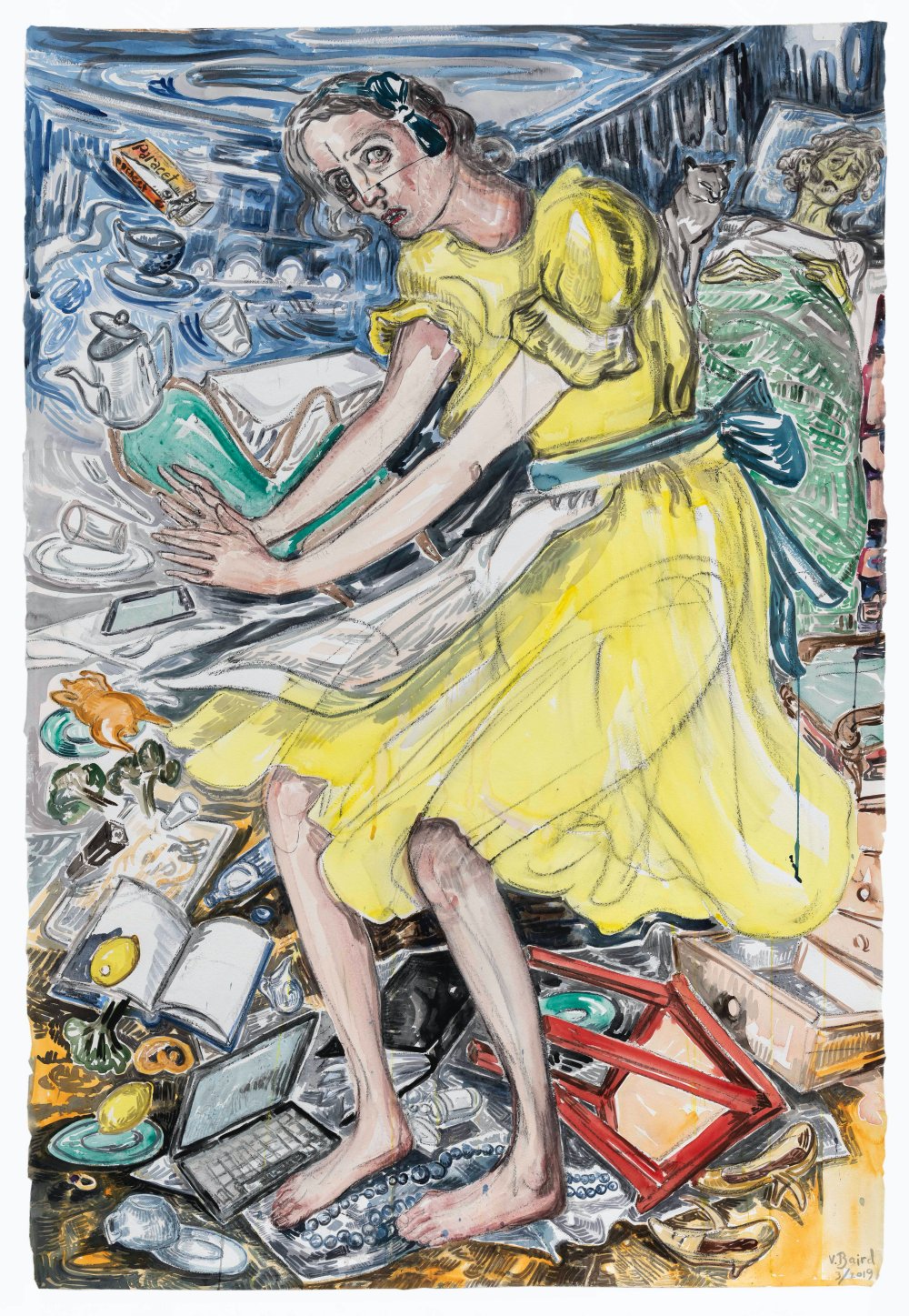 Vanessa Baird
I had three kittens in the dryer, 2020 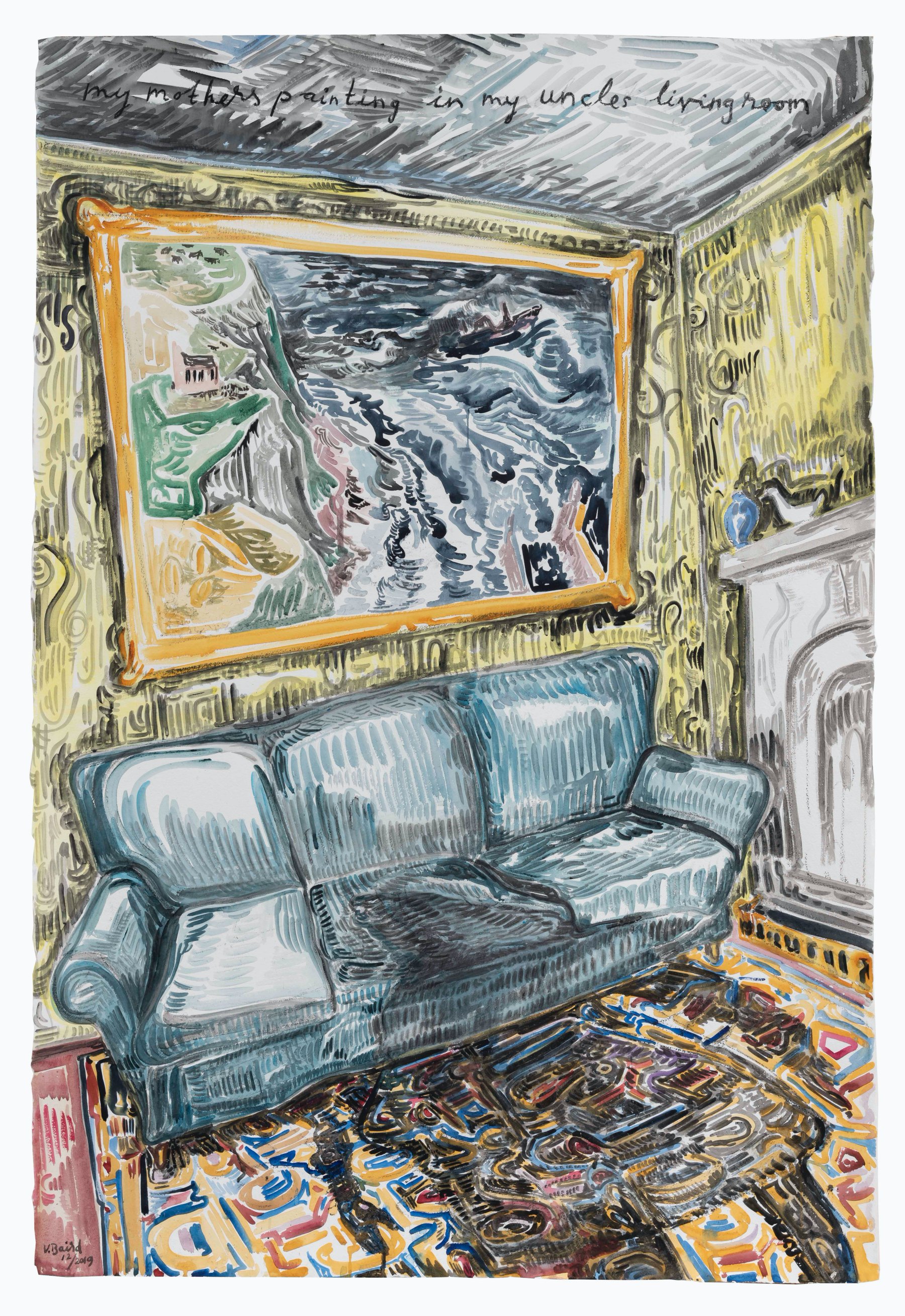 Raw, outlandish and utterly individual, Vanessa Baird’s charged works in pastel and watercolour range from room-size murals to intimate self-portraits and draw on a wide range of references from the artist’s own lived experiences, as well as Scandinavian folklore. Her extraordinary drawings depict ‘her world’, centred on the house that she grew up in and still inhabits with her three teenage children and elderly mother, for whom she acts as carer. Baird captures the difficult everyday tasks of looking after a family in a kaleidoscope of startling imagery, permeated with exhaustion, boredom, frustration, bodily functions and the chaotic detritus of domestic life. Whilst rooted in the autobiographical, her work equally references wider concerns, from fairy tales and legends, to the international politics of the European refugee crisis and the Oslo bombings of 2011; these all feed into uncompromising images underpinned with a dark, often disturbing humour that is both confidential and confrontational.

Parallels with other artists can be seen throughout Baird’s work: familial psychodramas are played out through the language of folklore and personal symbolism, as with Paula Rego and Louise Bourgois; shocking scenes evoke the scatalogical pandemonium of Hieronymous Bosch’s Garden of Earthly Delights or the blunt gruesomeness of Goya’s witches and war victims. There is common ground with the comical and highly sexualised drawings of Robert Crumb, George Condo and Paul McCarthy, though Baird offers a different, strikingly female perspective on the grotesque. And her haunting figures populating nightmarish rooms that twist around them at uncanny angles, captured in both gloomy and garish colours, echo the sickly expressionism of Ernst Ludwig Kirchner and, of course, Edvard Munch.

Despite these commonalities however, Baird’s work remains emphatically idiosyncratic; this exhibition, the artist’s first solo survey in the UK, features a selection of recent works that immerse the viewer in her very particular vision of quotidian domesticity. Baird’s images of family and friends reveal highly personal responses to universal themes – motherhood, sex and shame, as well as illness, fatigue and the ageing female body – continuing a curatorial focus on the body and bodily experience threaded throughout Drawing Room’s programme for 2020-21. Vanessa Baird handles these themes in a uniquely unforgettable and searingly provocative manner.

This exhibition is co-curated by Mary Doyle and Gillian Fox.

Vanessa Baird (b. 1963, Oslo) lives and works in Oslo. She is a winner of the prestigious Lorck Schive Art Award (2015), Norway’s most prominent award for artists living and working in Norway. She is a collaborator of acclaimed Norwegian author Karl Ove Knausgård, illustrating his novel, Om høsten (Autumn) in 2015. Together with colleague Mette Hellenes, Baird also runs the independent press Brunt hull. In November 2017, Baird opened the solo exhibition You are something else at Kunstnernes Hus, Oslo, which became one of the institutions most visited exhibitions and was hailed by critics and curators as one of the most important in recent Norwegian art history.

Baird was educated at the National Academy of Arts, Oslo, Norway, and the Royal College of Art, London. Solo exhibitions include: The National Museum of Art, Oslo; Göteborg Konstmuseum, Gotehnburg; Sørlandets Kunstmuseum, Kristiansand; Stenersenmuseet, Oslo and Lillehammer Kunstmuseum, Lillehammer. She has published three books: Red Herring (2016), Brothers Grimm’s, Ulven og Reven, (2013), and You can’t keep a good rabbit down (2009), all on No Comprendo Press, Oslo. Baird is represented in key public collections and with several permanent commissions in public spaces; among others at Sentralen in Oslo (2016) and the new governmental quarters in Oslo (2010-2013). Recent solo exhibitions include: Lorck Schive Art Award Trondheim (2015), Kunstnernes Hus, Oslo (2017), OSL contemporary, Oslo (2018), KODE in Bergen (2019), and she was part of the Kochi Muziris Biennale 2019 in Kerala, India, curated by Anita Dube.