Galerie Eva Presenhuber is proud to open a second Zurich gallery in the cultural heart of the city. The inaugural exhibition at Rämistrasse 33 presents new and significant sculptures and wall-based works by the Swiss artist Valentin Carron.

In his sculptures and collages, Carron imitates traditional handicrafts and unknown artworks, as well as stereotypical modern and everyday forms. By appropriating these objects and styles, he questions originality, authenticity, and identity in the globalized world. He reformulates traditional handicrafts, mainly from his Swiss homeland, by substituting natural materials like wood for synthetic materials; conversely, he commissions well-trained craftsmen to create precious works imitating cheap industrial articles. Both methods bear a characteristic touch of irony: incarnations of a romantic pastoral Switzerland are created using industrial materials, and traditional handicrafts are used to create works that oscillate between decoration and kitsch.

For the exhibition, Carron has created new sculptures that deal with the aesthetics of everyday culture in the popular handicrafts and souvenir industries, and are presented in all four exhibitions rooms. A wall-based work, constituting a fake wall made of faux OSB-panels, spans both floors and forms a bracket around the show.

For the wall-work, the artist commissioned a craftsman specialized in Trompe-l’œil to paint a wooden OSB-structure on MDF-panels. The work encapsulates the artist’s oeuvre and begs the question: what does one consider to be art? MDF is a cheap material often used for walls in shops or trade fairs. Coating a wall with a fake structure alludes to the technique of Scagliola, which was invented in the 17th century to create an inexpensive alternative to marble walls. A stucco-substance covers the walls and columns, giving them the appearance of precious marble.

Today, OSB-panels are often used to give walls and furniture the rough chic allure of lofts, studios, and improvised art spaces. In contrast to the fake marble of Scagliola, the painted MDF is not a cost-effective way of substituting an expensive material, but rather of replacing a cheap industrial material available in any DIY-shop with an analogous material that has been painted using an elaborate, labor-intensive, and expensive technique.

The new sculptures display Carron’s typical ironic intention that implies a detailed and empathetical observation by the artist of his surroundings. The omnipresent motifs include decorative and often kitschy devices used to make public spaces more comfortable or more beautiful. They all appear familiar and can potentially be found while traveling or while browsing other people’s holiday photos posted on the Internet. They include six figures in a round dance as part of a folklorist ritual, praying and representing values like solidarity, and the shape of a fish on makeshift blinds. In addition, a beam in the form of a small house brings to mind folklorist architecture, with a ring rendered in the middle of the central beam. The ironic title Suicide Pavilion evokes a rope in this ring, with which one could hang oneself. Also exhibited are tiled crosses — a shape significant in Carron’s oeuvre. All these are forms one usually does not pay attention to.

While some of these motifs are typical for Carron, insofar they seem familiar but are embedded in an unclear context, the saxophone made of pewter is a self-quote. In former works, Carron appropriated the ironically flattened wind instrument by searching for similar instruments, crushing them with his own feet and then creating bronze imitations of them, thereby transforming cheap items into sculptures made of valuable material. This kind of bodywork — crushing instruments with one’s feet — seems also to be emphasized by a work resembling a stretched arm with a hand on each side, coated with the color of the artist’s skin and spanning across two walls. The hands are dressed in fingerless gloves, often seen in films as an accessory typical of bohemian characters, an item the artist himself wears. The saxophone on view remains intact and stands out amongst other steel sculptures. It is as if the artist “repaired” a former work by exhibiting the “original” item, even though the objects handled by Carron do not display originality.

Leaving nothing untouched, Carron has installed the wall-work on the spot using a common jigsaw. The fake wall is therefore not perfectly planned and installed but displays marks of an amateurish working process, as if the artist himself does not know whether the panels are results of a highly elaborate handicraft or simply a product bought in a DIY-shop. Yet, the imperfection of the last step gives the work a perfect, unstable uncertainty characteristic of Carron’s works. 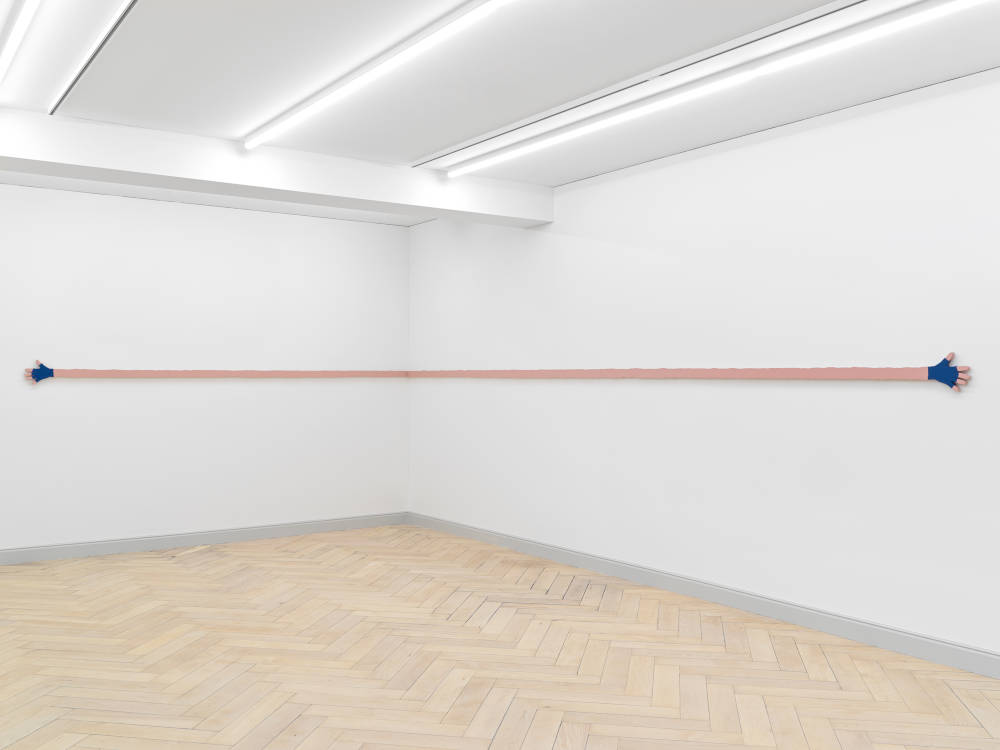