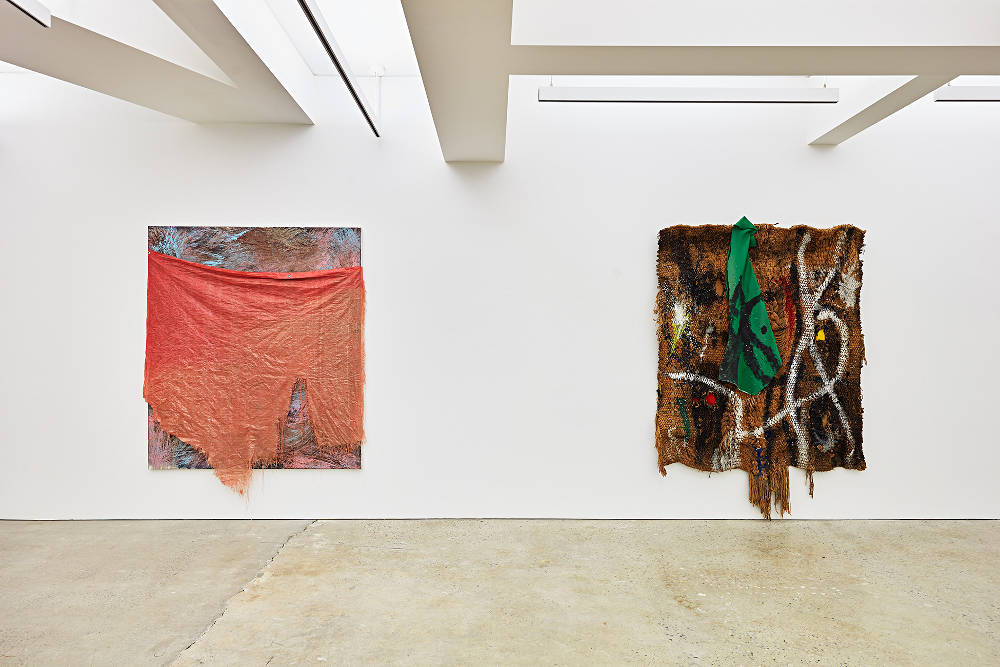 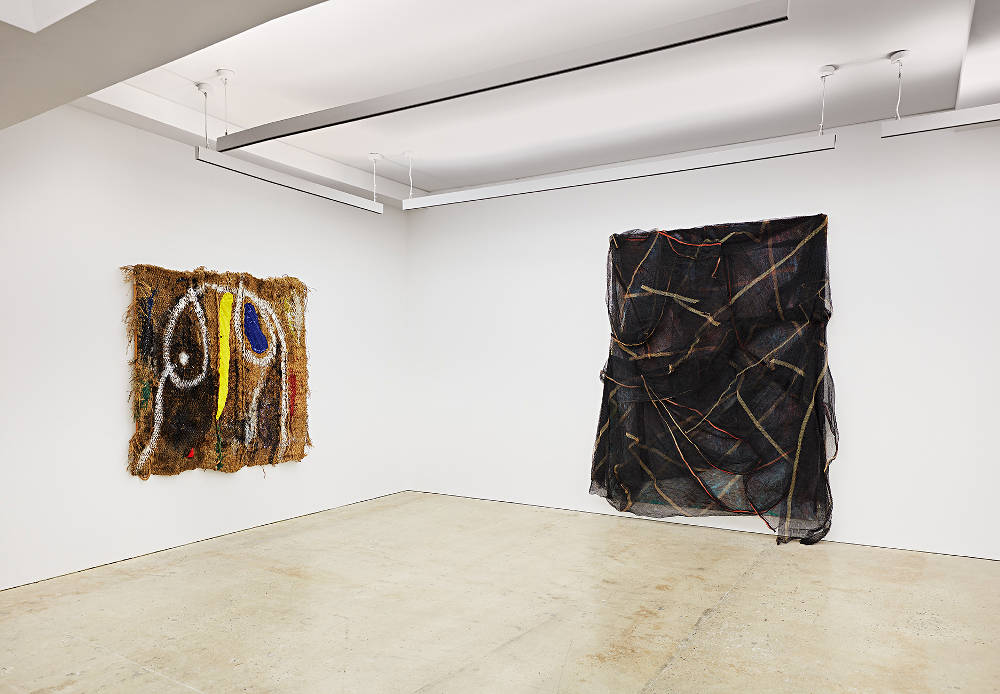 Notably, the exhibition is the first to present Miro’s Sobreteixims in the United States since Pierre Matisse Gallery’s presentation in 1973 and features esteemed works on loan from the Fundació Joan Miró, Barcelona. A fully illustrated catalogue with scholarly texts by Jordana Moore Saggese and Linda Weintraub will accompany the show.

Joan Miró’s pursuit of artistic liberty was fueled by the major historical events of his time, from World War I and II to the Spanish Civil War and Franco’s regime. As early as 1927, the artist famously declared an “assassination of painting,” and he committed himself thereon to unrestricted expression. He protested aesthetic norms and rejected technical mastery by rendering disorderly compositions and grotesque figuration, and utilizing unconventional media and supports, such as tar and rope or Masonite and Celotex. In 1970, when Miró began using ready-made materials to create his Sobreteixims, an old Catalan word for a small piece of fabric used as a patch for larger fabrics, he was 77 years old and lived on the island of Mallorca in permanent exile from the Franco regime. Harnessing the automatism of surrealism, he transformed the fibers of found supports—from traditional woven textile to industrial burlap sacks—through systematic destruction and alteration: puncturing and patching, tearing and stabilizing, and burning and extinguishing. The artist applied a range of media and objects to the transformed surfaces, such as acrylic, felt and string in Sobreteixim-sack 12 (1973) and buckets in Sobreteixim 14 (1973). Undulating between the treatment of support and ground, Miró emphasized the “un-covered” background material as much as the foreground. He confounded the customary figure-ground relationship by equating two traditionally hierarchical constituents of painting. Furthermore, Miro democratized his method of construction to defy the canon’s notion of the individual “artist genius”. Precociously postmodern, his Sobreteixims signify the process of their creation through incorporation of the objects used to produce them: brooms, buckets, or skeins of string.

A figurehead in postwar art, Miró established many of the formal innovations of modernist painting and presaged the tenets of postmodernism during the last decade of his career. His spontaneous gestures established the tenants of abstract expressionism, a movement that by the time David Hammons began his career had already been recognized as the new standard. It was this newfound canon that Hammons’ work defied as he commenced his career in 1960s America, a period marked by the civil rights movement and parallel sociopolitical upheavals. With particular critique of the art world and its history of racial exclusiveness, Hammons used nontraditional media, from chicken bones to sweatshirt hoods, and charged subject matter, such as slavery and racial slurs, to subvert the institutions perpetuating societal inequalities.

Similar to Miró, Hammons asserted his general disdain for art, proclaiming in a 1989 interview, “I can’t stand art actually. I’ve never, ever liked art, ever.” Palpably rejecting the canon of postwar painting, his ongoing Tarp series, created in his Harlem, NY studio, consist of painted canvases shrouded with frayed and tattered industrial fabrics that he found in the streets. Only through the tears and holes of these dilapidated materials, such as in Untitled (2015), or through the rumpled meshed cloth, seen in Untitled (from Dirty Money series) (2014), does Hammons allow glimpses of painterly brush strokes underneath. He defies the hierarchical preciousness of the medium, covering that which is traditionally exposed and elevating as the focus that which is discarded. Similar to Miró upending the principals of painting, Hammons quite literally denies the canon its traditional viewership.

Multidimensional in form and connotation, Miro’s Sobreteixims and Hammons’ Tarp paintings originate from distinct historical perspectives. Yet, when presented together, striking analogies are evidenced. Through parallel strategies of “uncovering” or “covering” institutional norms with ready-made fabrics, both series merge the material forays of found art with the critical commentary of conceptualism.

Joan Miró (b. 1893, Barcelona; d.1983, Palma de Mallorca, Spain) studied at Lonja School of Fine Arts in Barcelona. He received encouragement early in his career from art dealer José Dalmau, who presented the artist’s first solo exhibition at his Barcelona gallery in 1918. Miró made his first trip to Paris in the 1920s, where he met Pablo Picasso; associated with the poets Max Jacob, Pierre Reverdy, and Tristan Tzara; and participated in Dada activities. His work was included in the Salon d’Automne of 1923, as well as in the first Surrealist exhibition at the Galerie Pierre in 1925.

Miro is considered one of the seminal artists of the twentieth century. He worked across a breadth of media, including painting, drawing, sculpture, collage, and tapestry, to forge a remarkably original style that challenged the constraints of traditional aesthetics. Miró’s work can be found in prominent collections worldwide (e.g., Museum of Modern Art, New York, Tate Britain, London, and Reina Sofia, Madrid) and has been the subject of numerous international museum retrospectives, including at the Museum of Modern Art, New York (1941), Musée National d’Art Moderne, Paris (1962, 1978), and the Grand Palais, Paris (1974).

David Hammons (b. 1943, Springfield, Illinois; lives in New York) moved to Los Angeles in 1963 and attended the Chouinard Art Institute and Otis Art Institute. In 1974, he moved to New York City, where he gained notoriety during the 1970s and 1980s for his work. Hammons’s oeuvre shares the material concerns of Arte Povera and harnesses the conceptual nuances of Duchamp. Although his career is over 30 years in the making, his use of a wide range of media and styles defies categorization. Notably, much of his work addresses cultural stereotypes and racial issues in the United States.