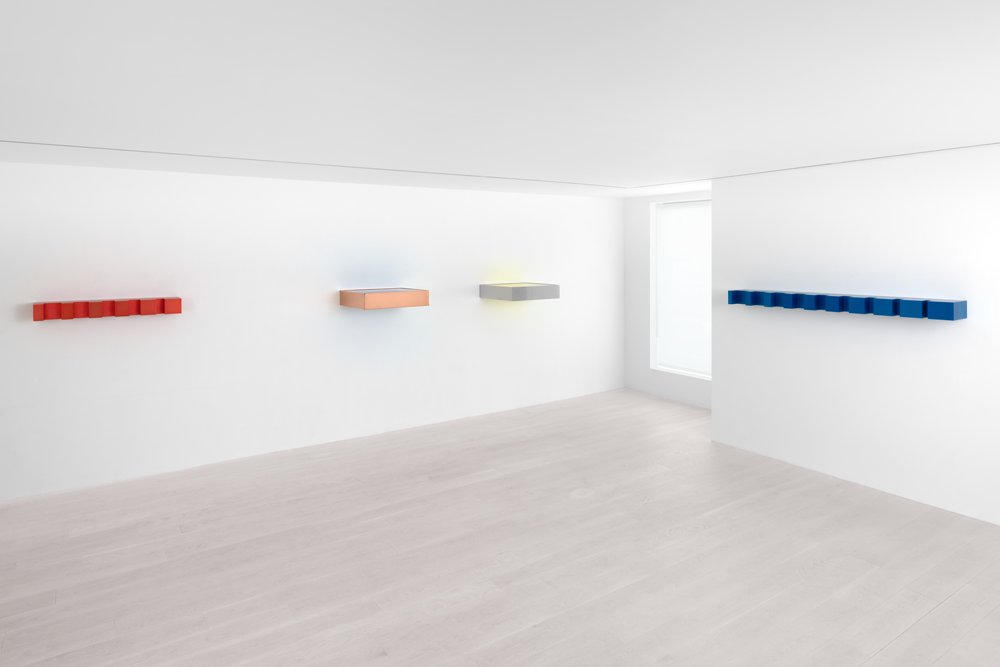 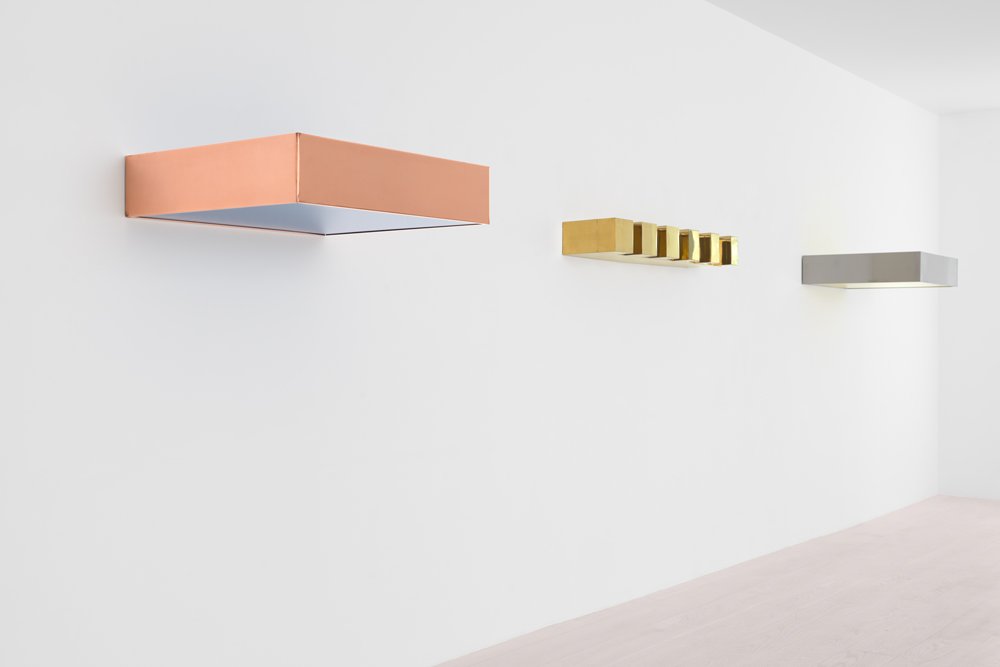 It was at an exhibition in 1964 that Donald Judd came across one of Dan Flavin’s illuminated neon tubes for the first time. Placed ‘at a diagonal on an approximately eleven by eleven (foot) wall,’ Judd was enthralled by the simplicity and singularity of this work. For him, this solitary neon tube embodied all of the formal, self-asserting and stand-alone qualities that he was then seeking from a work of art. But more than this, he later remarked, what impressed him most was the way in which this singular form had made ‘an intelligible idea of the whole wall.’

In the years that followed, this almost magical ability of a solitary object to transform, disrupt and also to articulate the space into which it was placed was to become one of the defining features of Judd’s own work. Judd was, in fact, to become the absolute master of this approach, creating sculptures of such formal simplicity, precision, and purity that the actuality of their physical presence became startling. Indeed, such was the perfection of Judd’s works that they often came to look like materializations from another world.

Judd’s creations attained this quality, the critic Robert Hughes would write, because they were objects that were manifestly ‘in this world but told us nothing about the world.’ So perfect, harmonious, and beautiful was the sublime geometry, open-form structure, and immaculate, industrially-manufactured finish of Judd’s sculptures that they came to attain what Robert Smithson described as an ‘uncanny materiality.’ This was a physical sense of presence so incisive and particular that it seemed to affect and even alter the space into which the works were set, infusing it with an activated air of potency and even mystery. This effect was what Judd defined as the innate power of the ‘specific object.’

‘Specific Objects’ was the title of Judd’s now famous 1965 essay in which he first argued that it was the singularity of an object and the physical actuality of its presence in real space that established not only its formal identity but also its power and efficacy as a work of art. Following this rationale, Judd argued that the simpler the form of the object, the stronger and more profound would be the power of its presence upon the space around it.

‘Most works of art… only have one quality’ Judd wrote, and should therefore assume only ‘one form. It isn’t necessary for a work to have a lot of things to look at, to compare, to analyze one by one, to contemplate. The thing as a whole, its quality as a whole, is what is interesting. The main things are alone and are more intense, clear and powerful. They are not diluted by an inherited format, variations of a form, mild contrasts and connecting parts and areas.’

Judd’s Stacks and Progressions are the logical consequence of this reductive philosophy of form to its absolute essence and were to become the twin pillars of his artistic production over the next two decades. Believing that it was the thing in itself that was most important in a work and that nothing should detract from its representation of itself, Judd became one of the first artists to insist on having all his works made by industrial means and to use only cold, impersonal, industrial materials. Only in this way, he believed, could the absolute precision necessary for his work to be seen only for what it was and not for the craftsmanship or means by which it had been made be achieved. Similarly, an absolute singularity of form was required in order to articulate these ideas in the most direct and non-elaborate way.

The linearity of the ‘Progression’ and the open box-form of the ‘Stack’ were the perfect structures for Judd because these are the two forms that intersect all sculptural notions of space in the simplest and most direct of ways. Each form is essentially a material measurement of real space – one vertical (in the Stacks), the other horizontal (in the Progressions). Each also takes the form of a linear, mathematical sequencing of alternating solid form and empty space. In the Progressions, the gaps of space and the blocks of form are derived from simple additive progressions such as 1,2,3,4 etc., or the Fibonacci sequence, 1,1,2.3.5….for example. In the Stacks, especially the transparent, colored Perspex box versions, a self-demonstrable, simultaneously open and enclosed space is introduced. As a result, each of these singular, wall-mounted forms presents, in a different way, a precisely-measured intervention or interruption of the space around them: one that is both formal and conceptual. And, they do so with such clarity and mathematical exactitude that they often startle the viewer into a more acute appreciation of the nature of the spatial environment which they themselves inhabit.

In its presentation of a sequence of singular, wall-mounted Single Stacks and Progressions from various stages of Judd’s career, Uncanny Materiality: Donald Judd’s Specific Objects at Mignoni is focused directly on this underlying sense of singularity running throughout Judd’s oeuvre. Comprised only of six solitary, single-form, wall-mounted sculptures – three Single Stacks, two Progressions, a ‘Swiss’ work from 1984 that showcases the new enameling techniques (discovered that same year) that allowed Judd to indulge his love of color – the exhibition offers a sequence of the artist’s ‘specific objects.’ Each one of which – ‘alone,’ ‘intense,’ ‘clear and powerful’ – can also be said to make ‘an intelligible idea of the whole wall.’

In addition to the aforementioned sculptures, a three-unit plywood wall piece is showcased in the gallery’s private room.