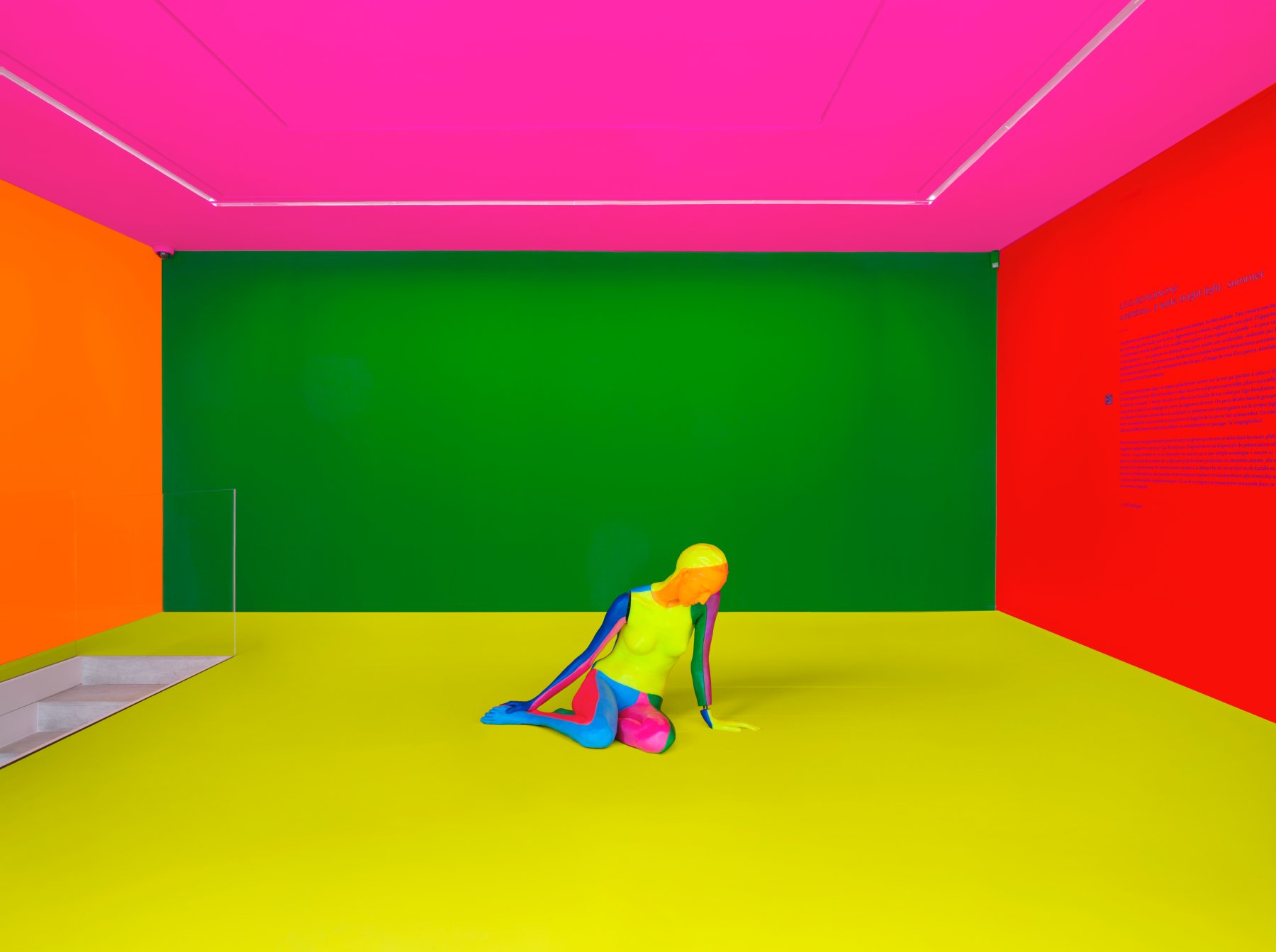 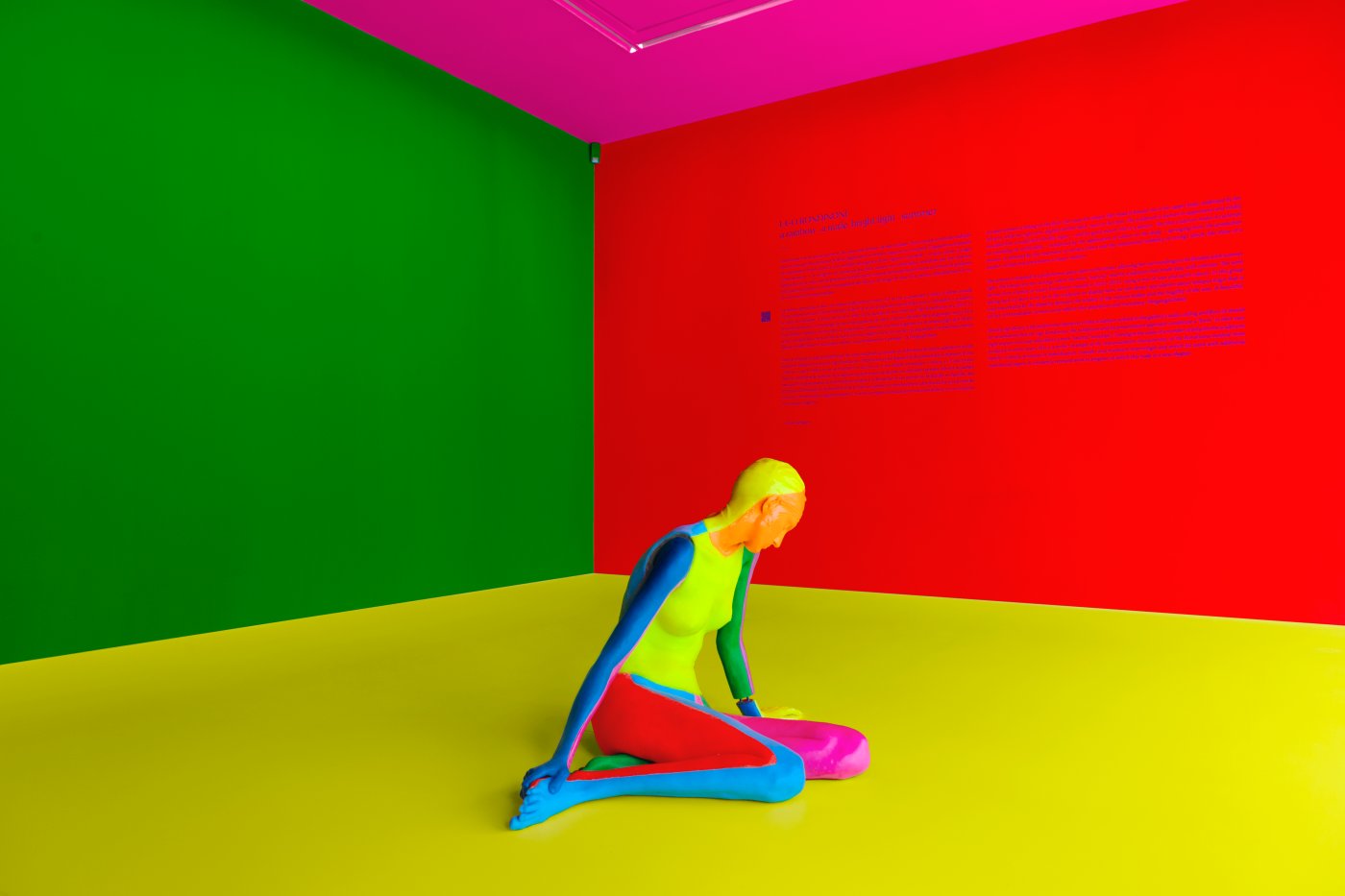 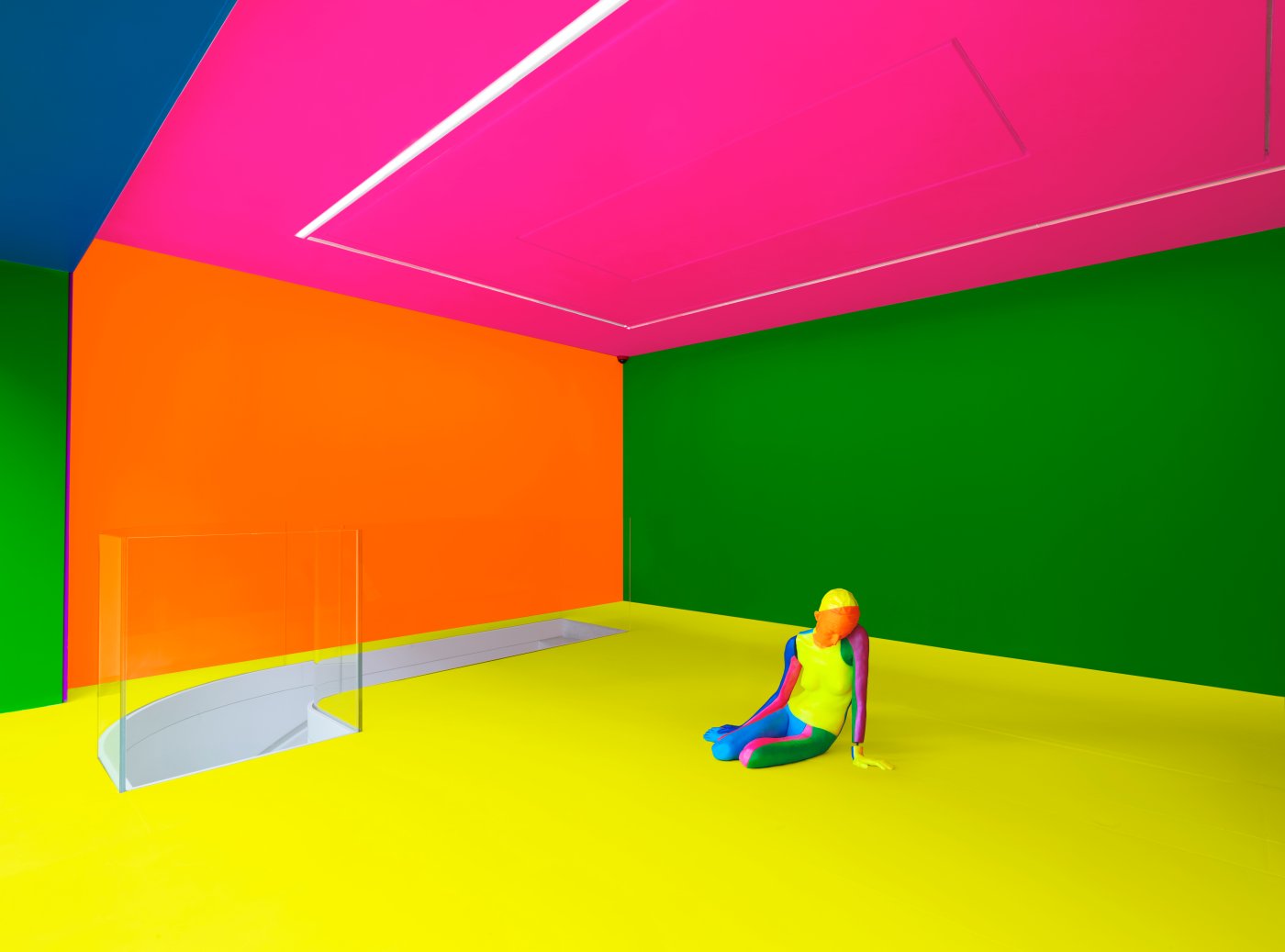 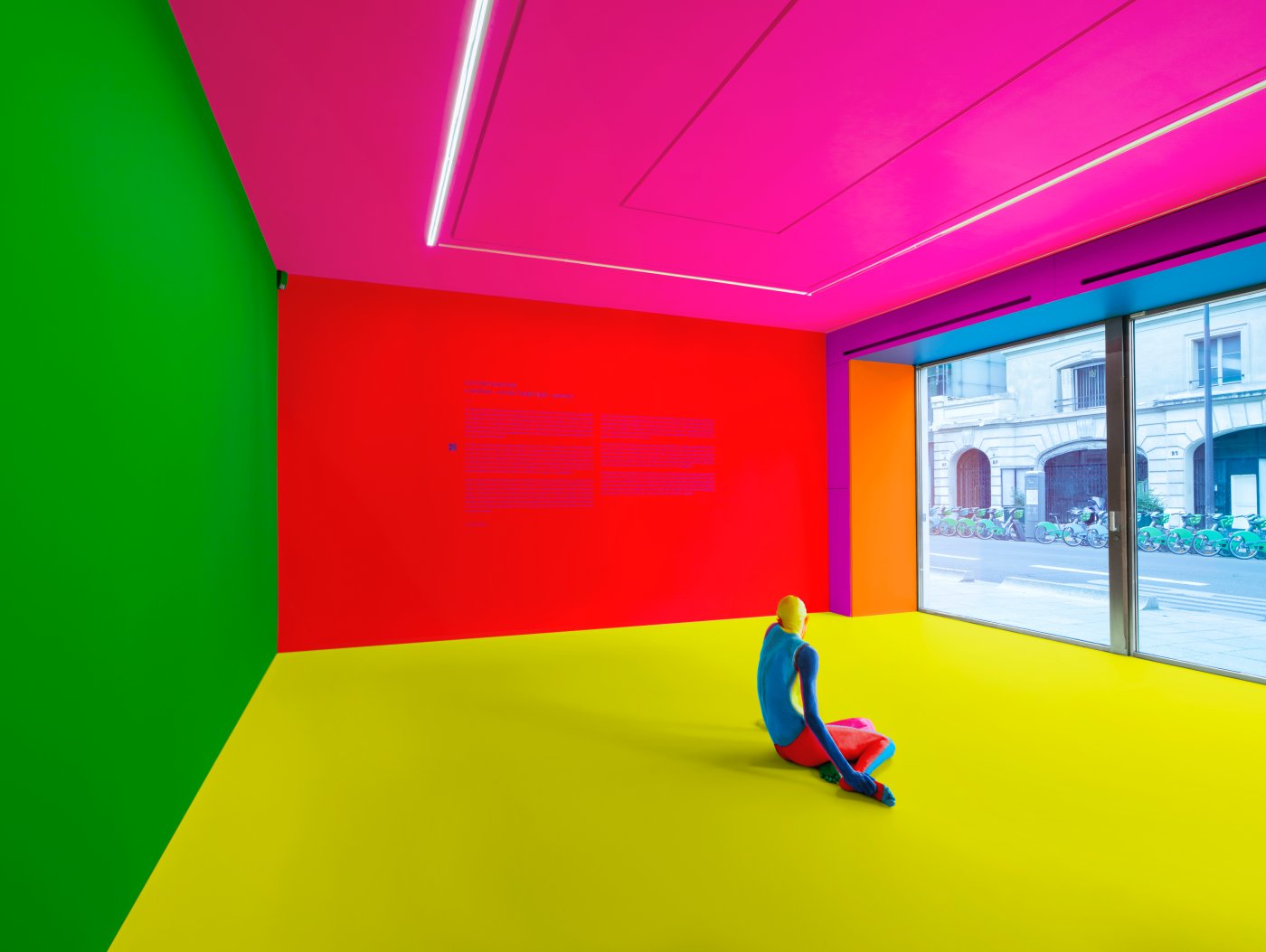 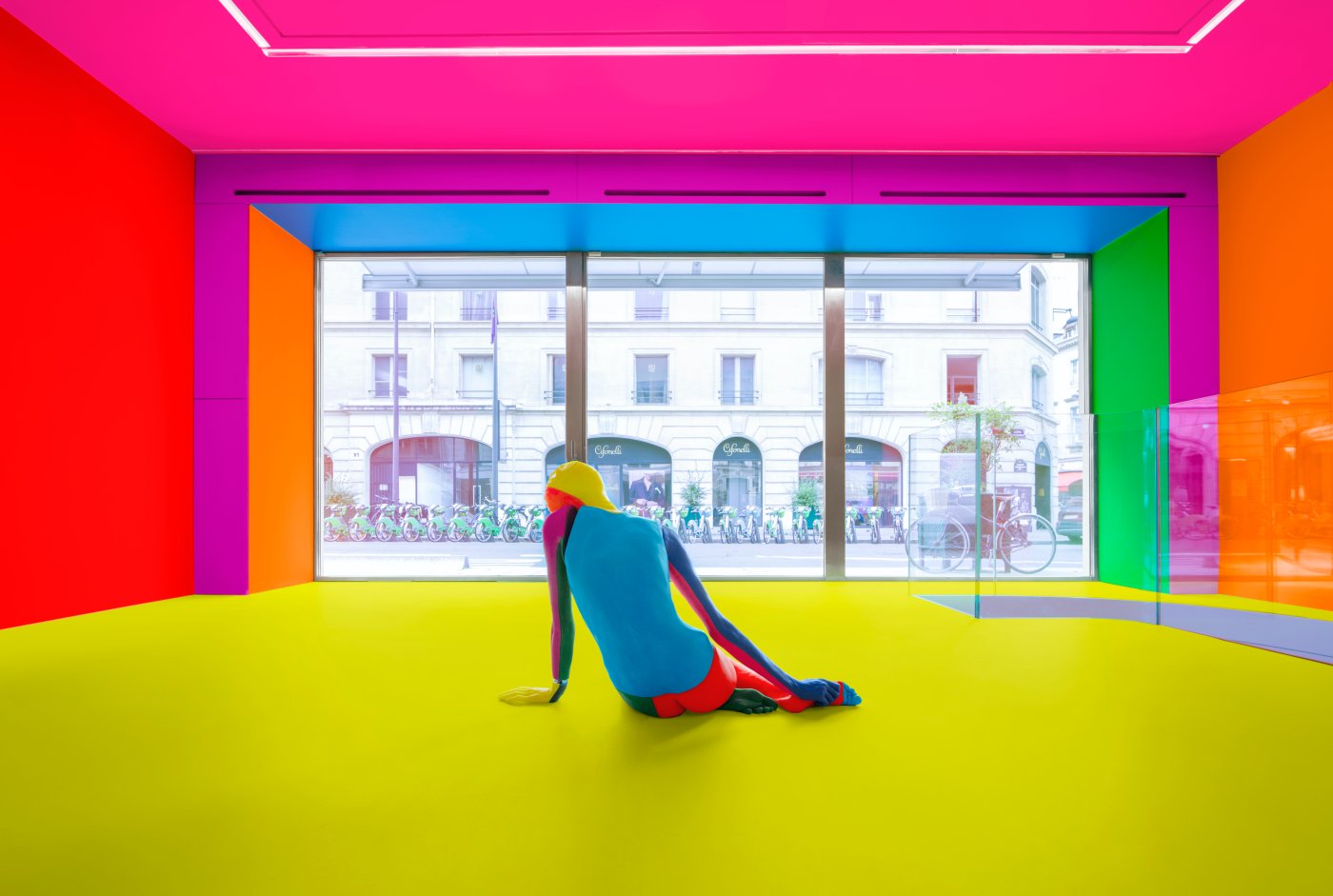 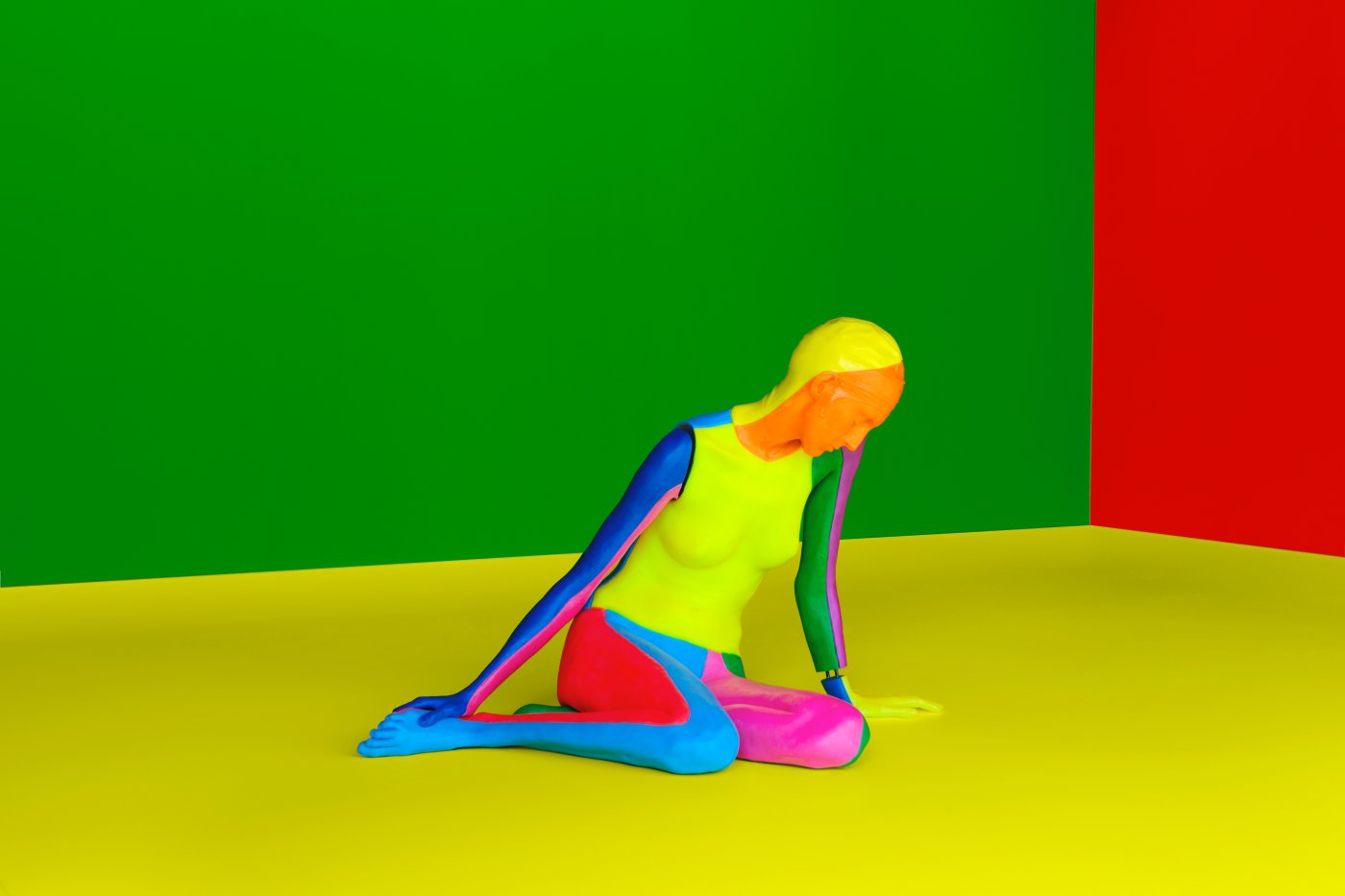 A naked woman is sitting on the floor. Her eyes are closed. Her head is bowed. As is her upper body, stabilised by her left arm, while her right arm, slightly further back, rests on her foot. The sculpture is human in appearance and visibly moulded from a model full of bodily vigour – and for good reason: this is a dancer. Yet this sculpture makes no attempt at concealing an artificiality – reinforced by the application of colour on the body – springing from the production process, as attested by the treatment of certain joints and the intentional visibility of strings which, like those of a puppet, exclude any pretensions to hyper-realism.

The woman is situated in a polychrome space open to the street, allowing her surroundings to be flooded with summer light. She blends into her setting, where the more “natural” matrix sculptures had made play with contrast. The work derives from a family of nudes Rondinone created in 2010–2011, using a mix of wax and earth colours. In this group dating back 10 years or so, as in the sculpture on display here, we can detect speculation about tempus fugit that is only exacerbated by the disparity between the vitality of the mature bodies and the fragility of the wax. A beautiful, all but untranslatable German word reflects this separation and transience: Vergänglichkeit.

Equally significant is the polychrome character of this sculpture, echoed in the gallery’s walls, ceiling and floor (it should be remembered that for Ugo Rondinone, the exhibition and its presentation approach constitute a “form” in their own right and are in no way reducible to a mere “neutral” envelope). Coming in the wake of a number of polychrome sculptures produced in recent years, this is a perfect example of the transmutation characteristic of the Rondinone method: from family to family, processes of hybridisation, transfer and mutation intermingle and enrich his work with additional intertextual layers. A constantly renewed work in progress of which this nude is a new chapter.

Simultaneously to his solo exhibition at kamel mennour, Ugo Rondinone is presenting we are poems, an in situ intervention at the Beaux-Arts de Paris and the love + the lust, a sculpture on view Place Saint-Germain-des-Prés as part of Parcours Saint-Germain, from June 1 to 10, 2021.