“The question of images does not interest us as such, nor does the subject, which is perhaps always the question of painting itself. But what is a painting? Images are simply references to an era — physical or digital stigmata of our time. As such a portrait can become, once transformed into a painting, a still life. Our painting develops empirically, according to the times, the general climate, in short, according to the weather. ”
– Tursic & Mille

Galerie Max Hetzler presents Strange Days, Tursic & Mille’s first solo exhibition in the UK. Featuring twelve paintings and two sculptures, each of the works represents one month out of the past twelve. Serving as a kind of calendar, the exhibition emphasises that painting is always about time, and its absurdity. 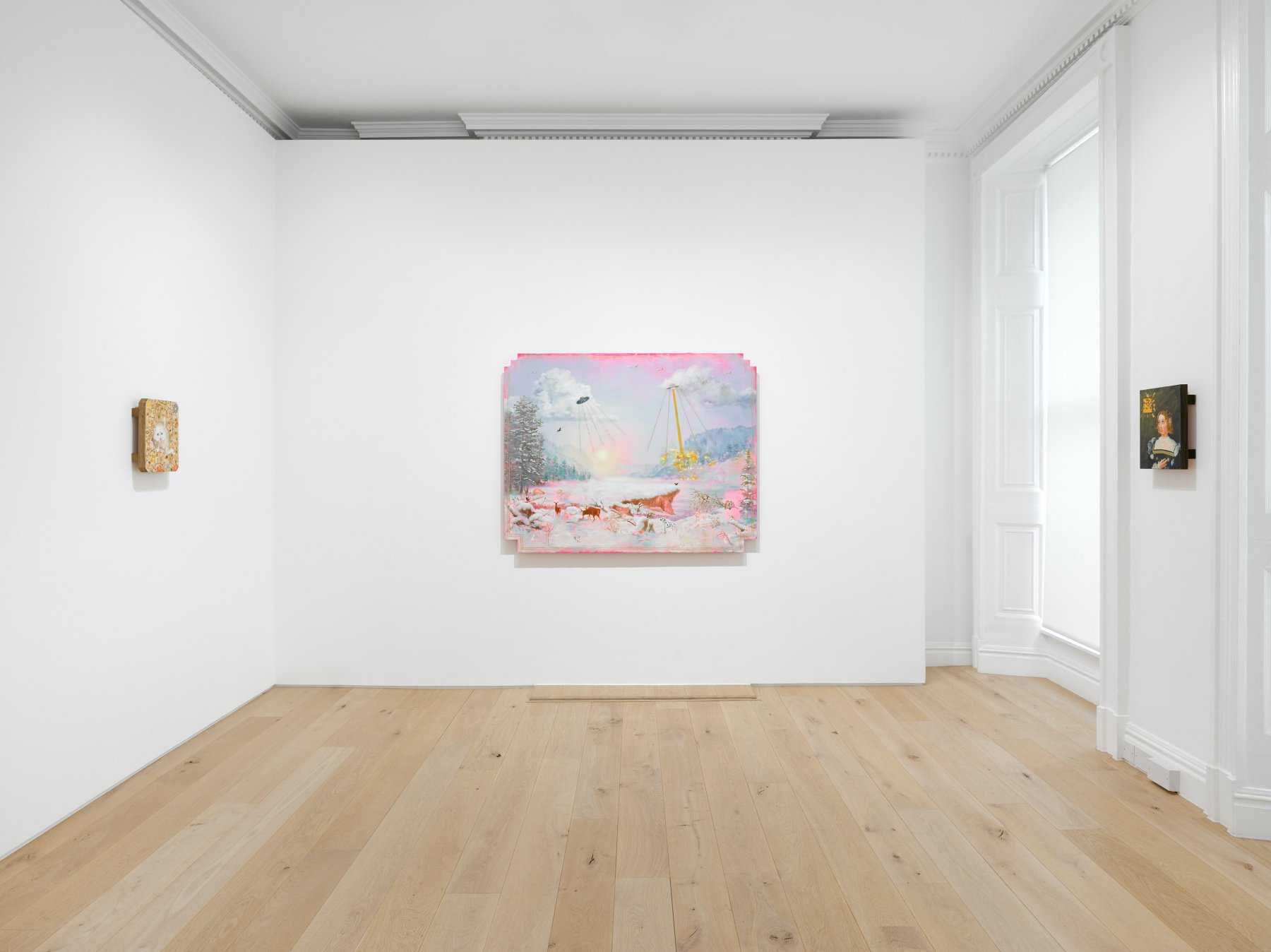 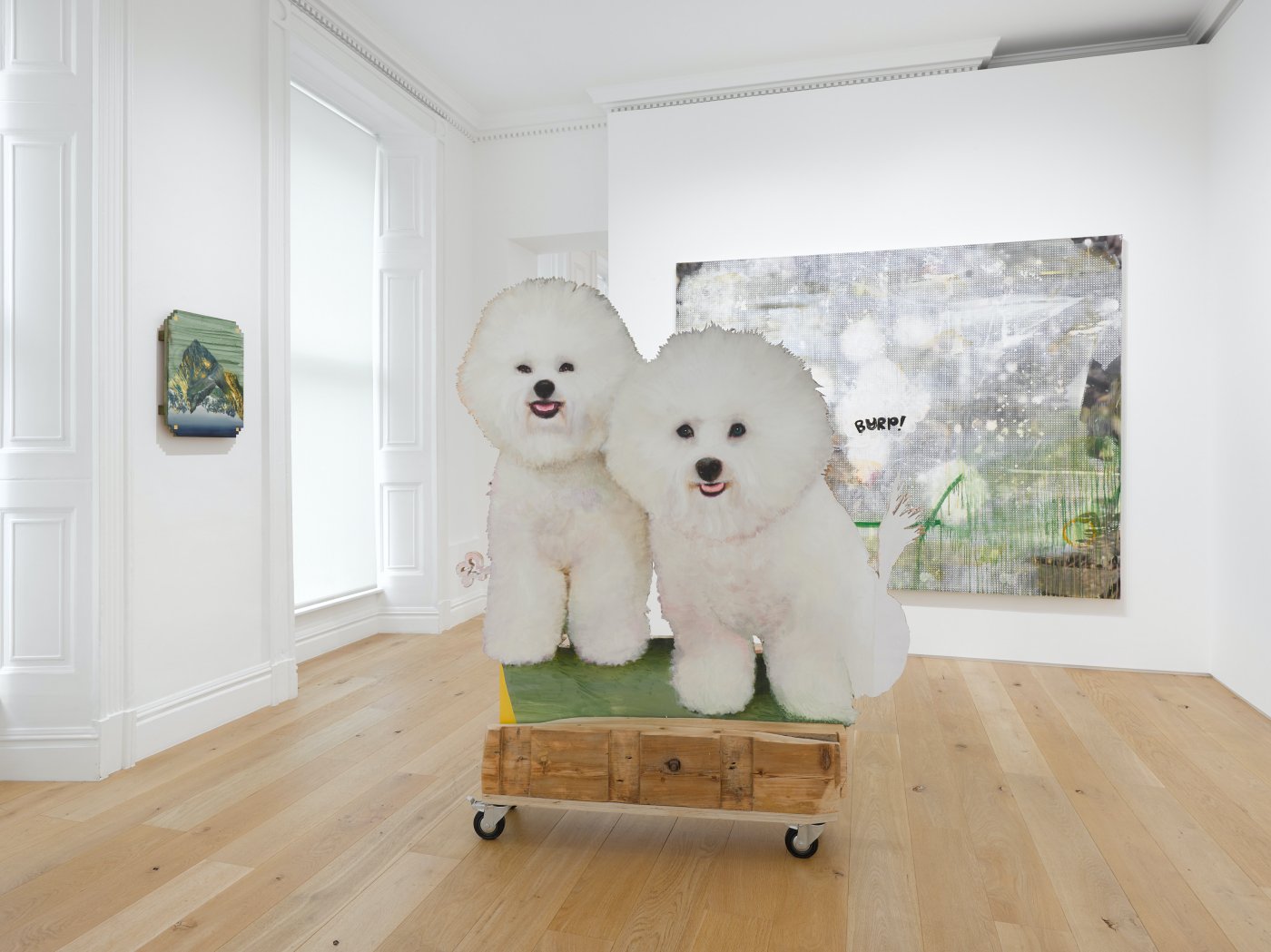 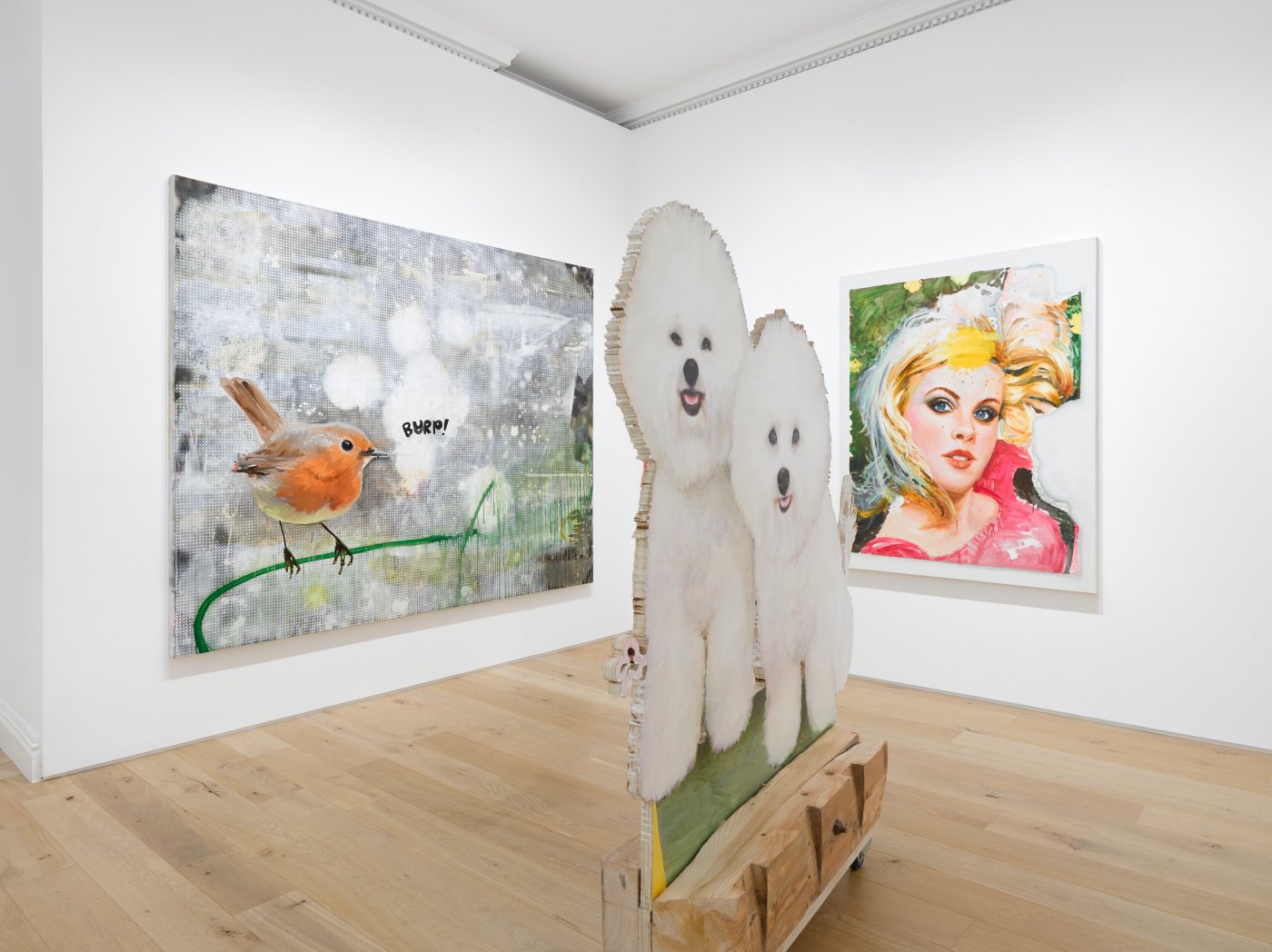 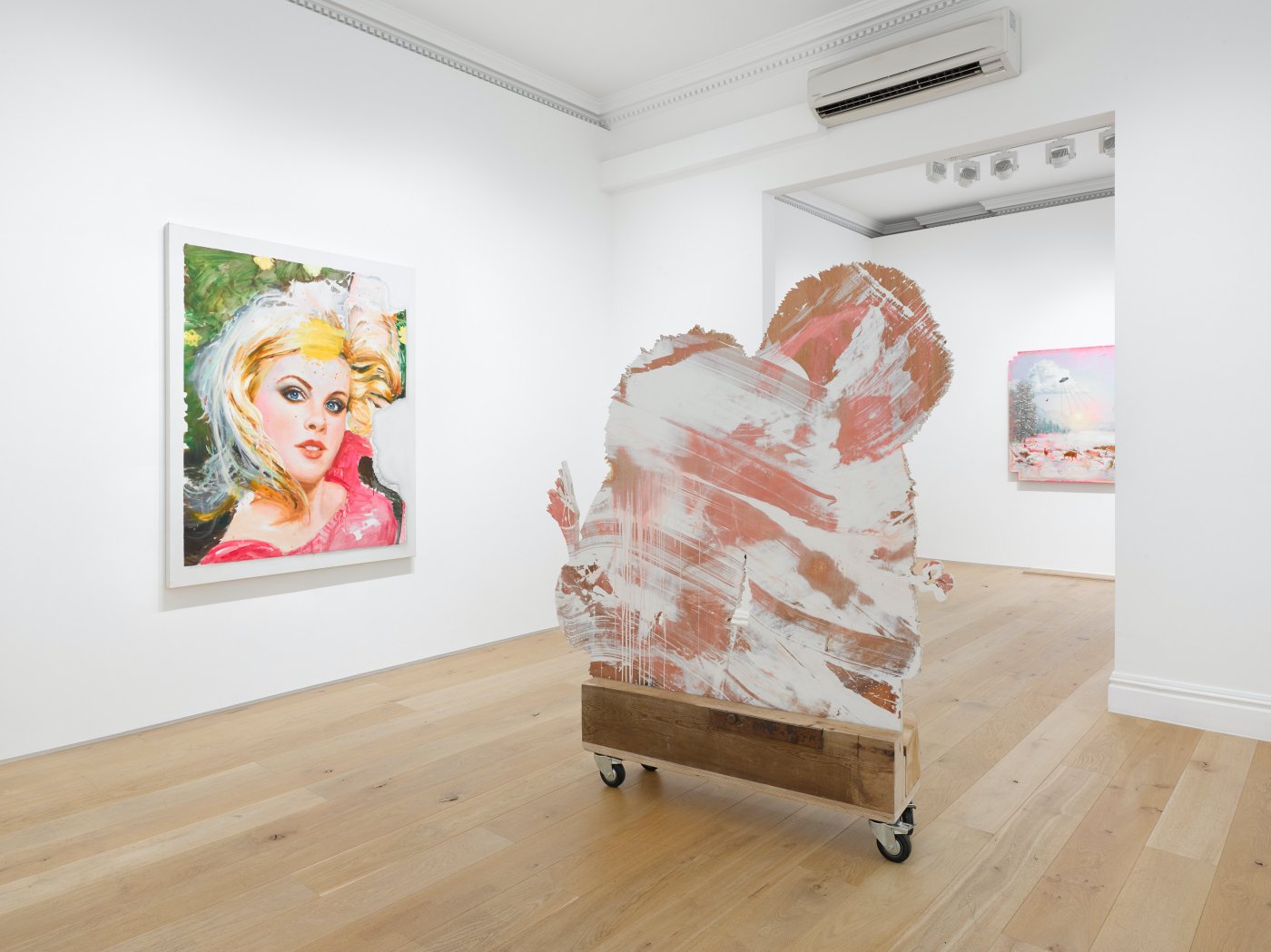 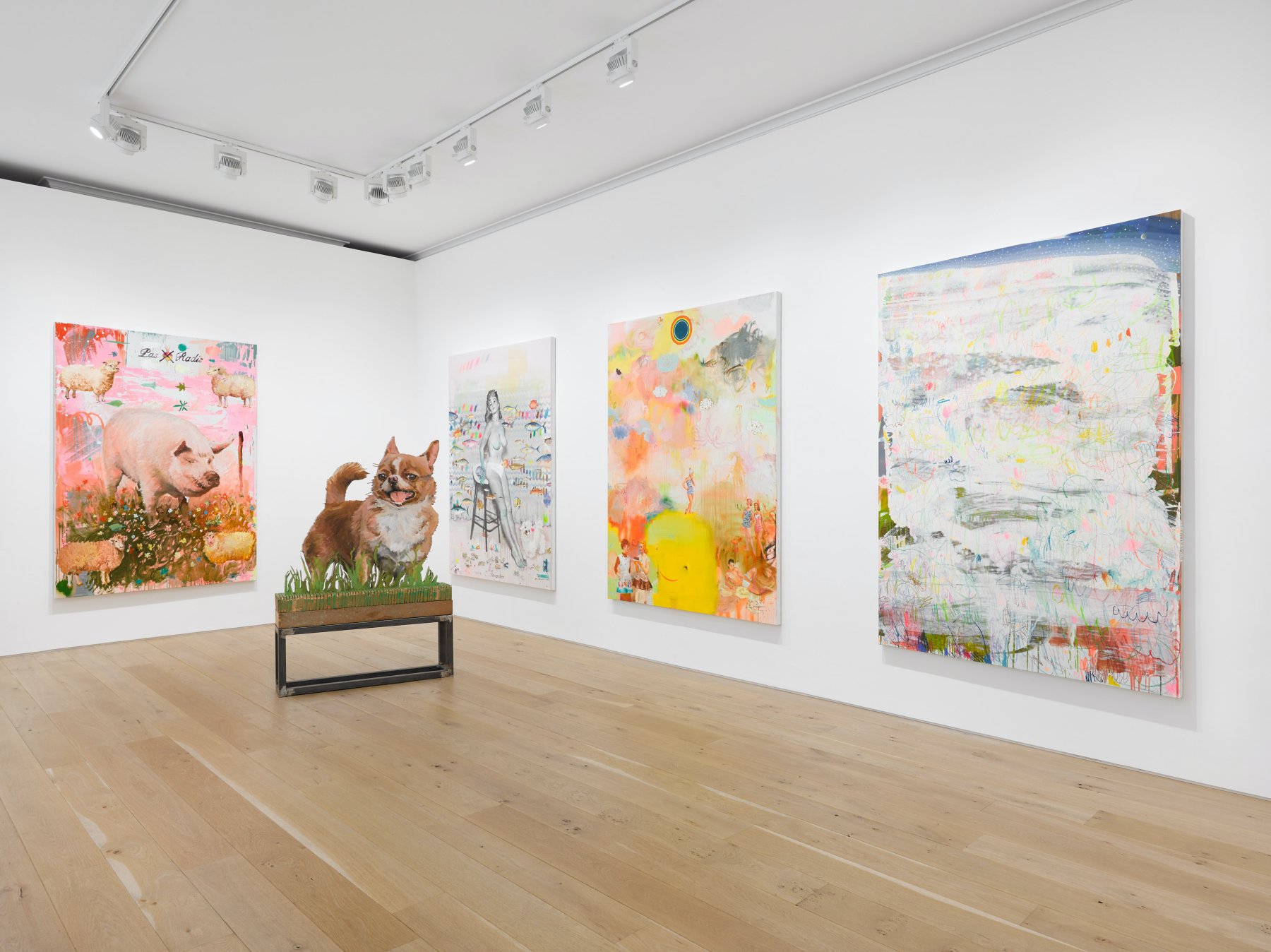 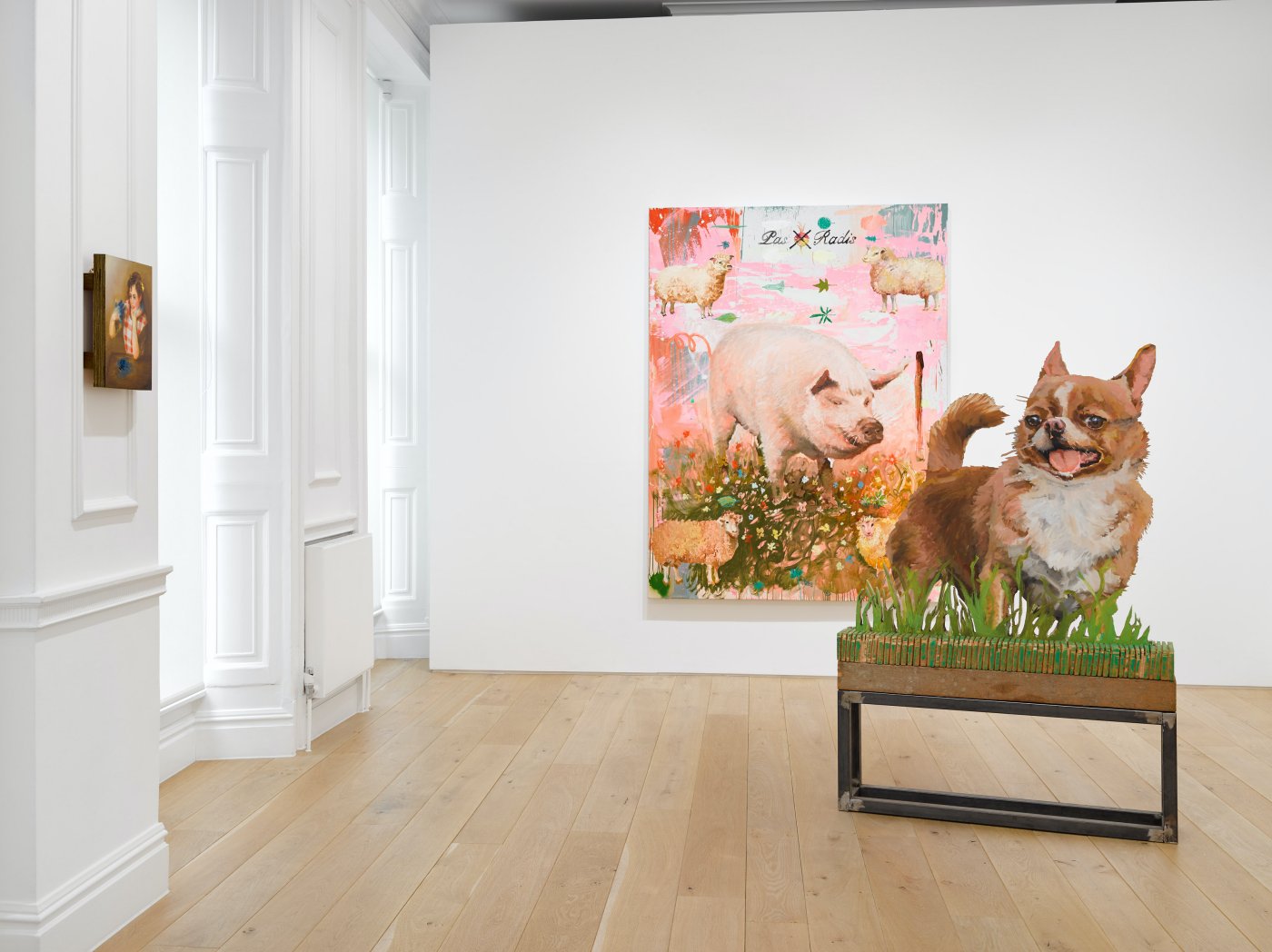 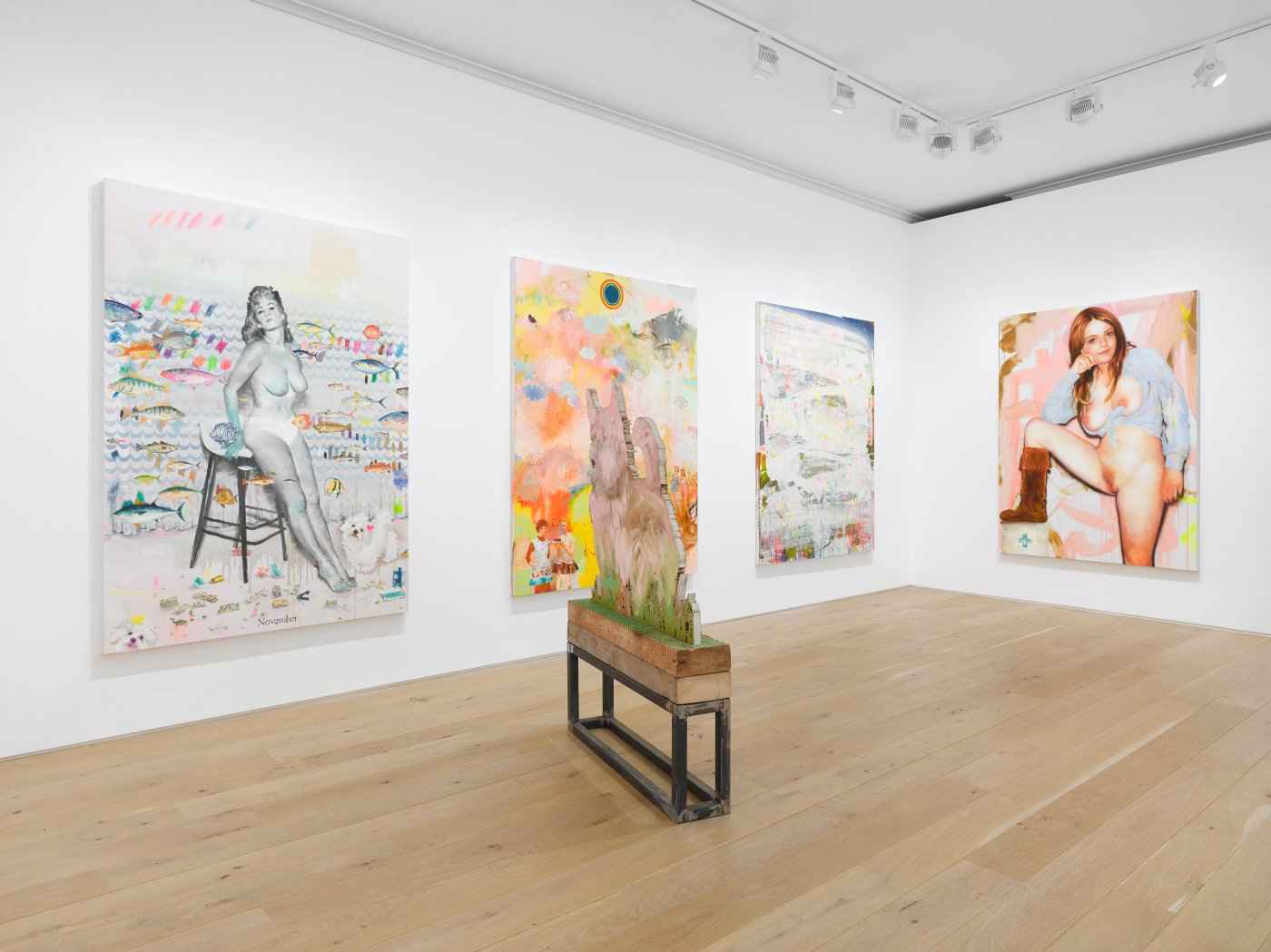 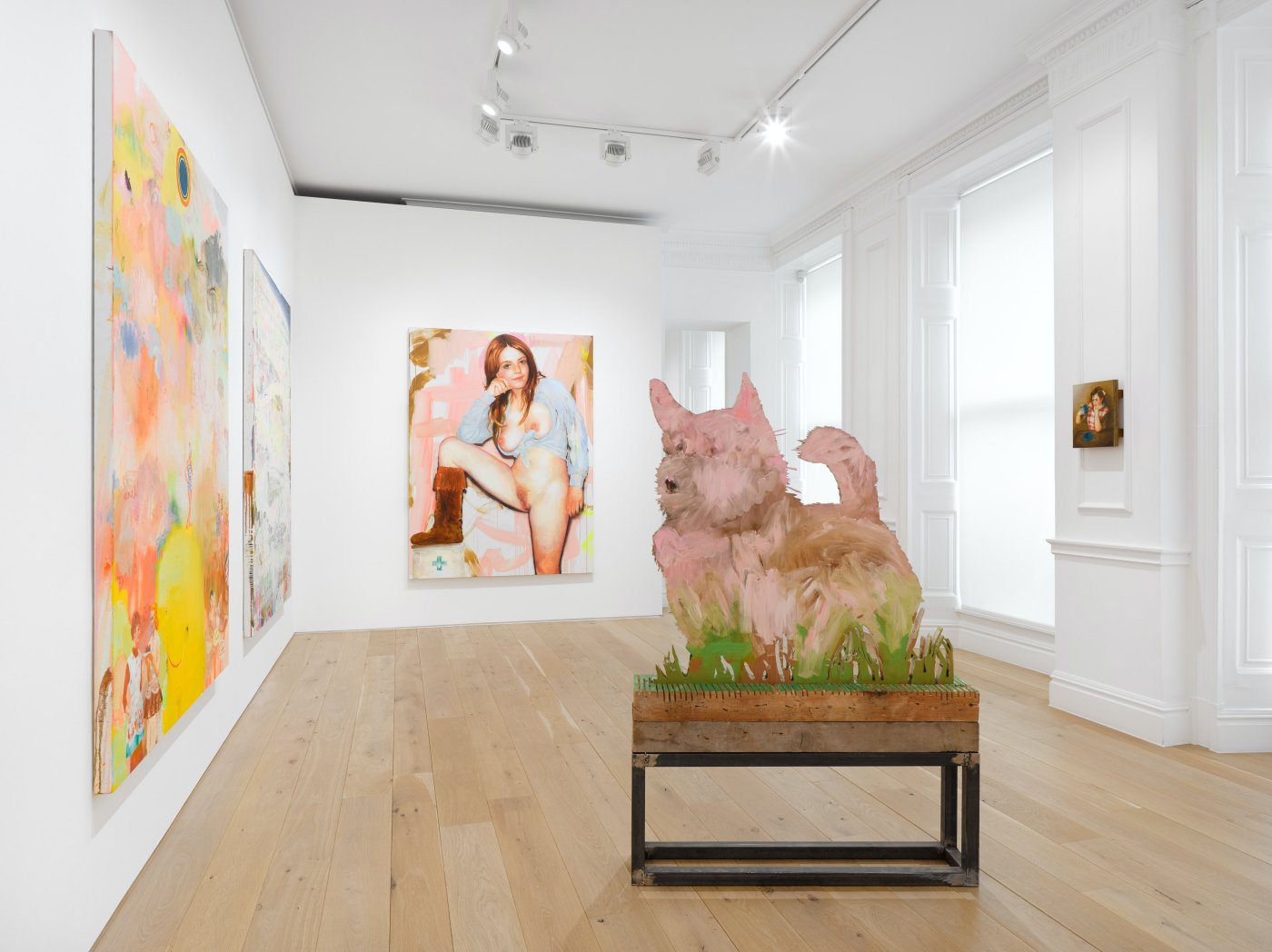 A reflection on a year where days turned into months, the artist duo guides us through a world of strange days bursting with colour, cheese, bichons, pigs, finger painting, mountains, pills, nurses and noblewomen. In a quasi-hallucinatory realm in which the real bleeds into the imagined, Emmental cheese becomes the centre piece of a devotional icon; a bird announcing the advent of spring lets out only a burp; and dreams of travel morph into UFOs.

While this may recall an instagram feed on steroids, and a perfect exemplification of the contemporary overload of images, Tursic & Mille’s practice stems from the limitless, universal archive of the internet but also out of the art historical tradition of portraiture, still-life painting, religious icons, Romantic landscapes and Abstract Expressionism. The artists explain that when they began in the early 2000s “as nobody wanted to see painting, we were forced to create paintings that jump out at you—use subjects that couldn’t not be seen.” Out of this arises pornography as the source material for portraiture, fluorescent pink landscapes and Faith represented by a pin-up.

The month of September in The Non-Sens Painting (September) is represented by a reversible landscape painting, in which the world can be turned on its head at any moment. In fact, the painting will be flipped daily. Guarding, and intentionally obscuring the paintings, are two free standing bichons and a chihuahua, magnified to ten times their actual size. The monumental toy dogs simultaneously look like they could have jumped off of the lap of any of the women depicted in the paintings and harken back to the gravitas of historical painting. Dogs first appeared as a symbol of the hunt in Palaeolithic cave paintings and are continuously co-opted throughout art history, by Bruegel, Goya and Titian amongst others, as conduits of emotion.

Happiness and Clouds (August) presents us with 1950s housewives, bathers and a male model floating within a vibrant, abstract realm. Blurring the boundaries between abstraction and figuration, the abstraction is a literal manifestation of the process of painting — colour, as pure matter, becoming form. This mise-en-abîme of the act of painting is indicative of the artists’ practice as a whole. Diverting images from their original meaning, Tursic & Mille harness the power of imagery to interrogate the role of painting in the 21st century. Ignoring the distinctions between high and low culture, and combining genres and time periods with acute humour and a cunning knowledge of art history, the artists comment on our visually saturated world and continuously push the boundaries of painting today.

Nominated for the prestigious Marcel Duchamp prize in 2019, Tursic & Mille are recognised as amongst the most innovative artists of their generation in France, whose works are in the collections of the Centre Pompidou, Paris; Le Consortium, Dijon and Berardo Museum, Lisbon amongst others.

An artist book will be published on the occasion of the exhibition. Tursic & Mille will have a solo exhibition at Le Consortium, Dijon in 2022.