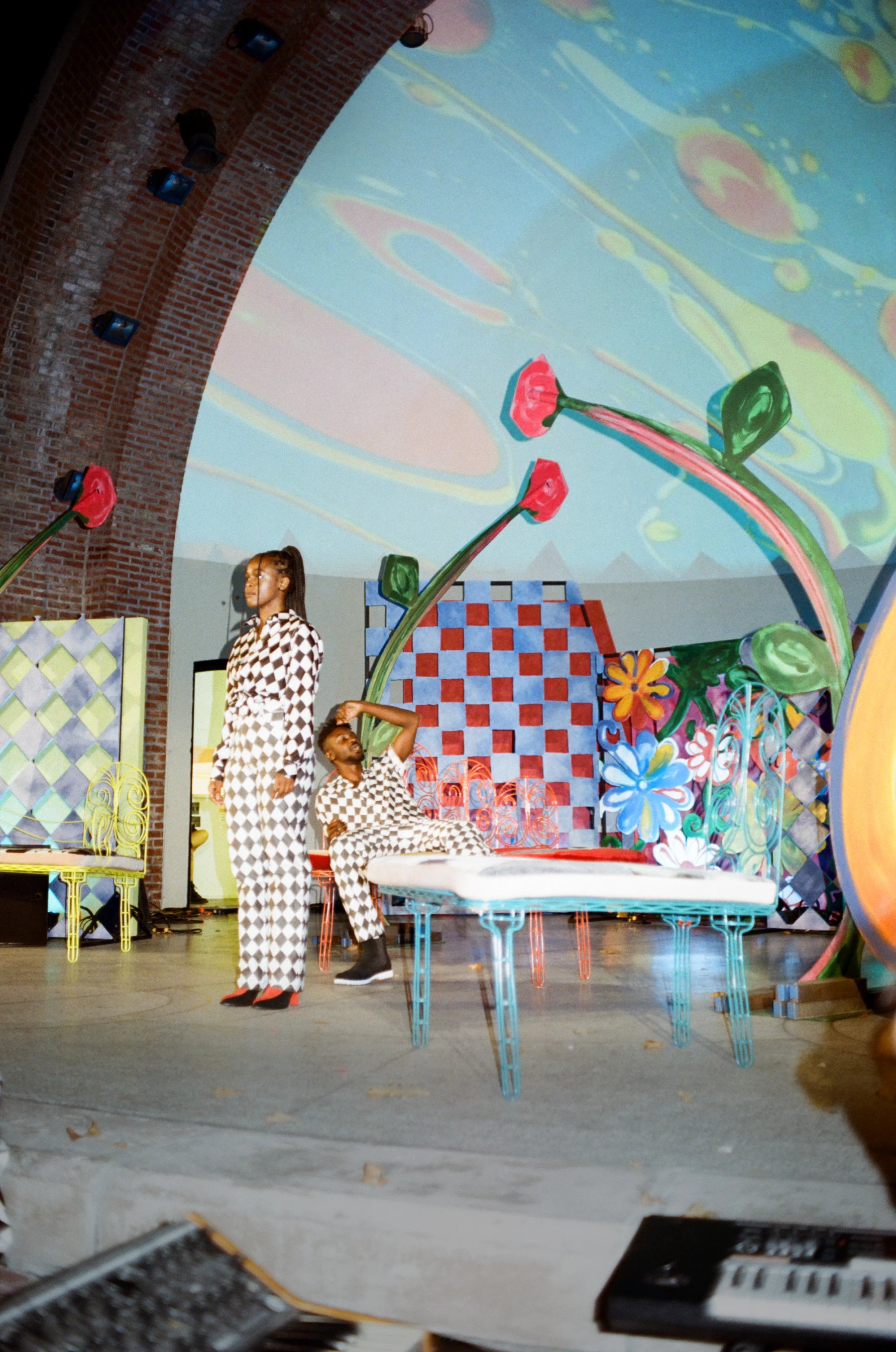 Working as windows into the home, groupings of intimate vignettes across both gallery spaces situate Self’s chorus of imagined characters within domestic scenes. A colloquial term for an introvert who prefers to stay within the confines of home, the show’s title Home Body underscores the inherent tensions at work in domestic settings, where socially-prescribed identity and gender politics still furnish our so-called ‘safe spaces’.

Depicting moments of intimacy, a new series of paintings, on view at Eastcastle Street, have been constructed as assemblages, combining various modes of expression such as sewn, painted and printed materials. The exhibition introduces Self’s functional art objects, tables and chairs, to London, a recent development in the artist’s practice. These geometric props of quotidian items heighten the theatricality found within her two-dimensional works.

Since 2020 – a period that forced us all to confront our private environments, habits and relationships newly – Self has been examining the domestic space as a site for both personal expression and performance. In addition to her visualisations of the physical trappings of home, the artist has fashioned a world where relational dynamics between various archetypes are played out. Primary figures of unnamed women and men, unknown yet strangely familiar, interact with one another in various scenes, giving each other knowing looks across the gallery walls.

Shown alongside these new works is a screening of Self’s performance Sounding Board (2021). Written and directed by the artist, the play, which premiered at the 2021 Performa Biennial in New York City, explores issues of domesticity, race and gender. The dialogue is interspersed with music by Boney M., and the hand painted, sculpturesque stage – set in the bandstand of Harlem’s Jackie Robinson Park – employs the distinctive, brightly-coloured geometry and pattern found in her two-dimensional works. Wearing costumes and shoes designed by the artist, the characters appear as if they are moving through her paintings, existing quite literally as living pictures.

At Savile Row, the sculptures and paintings on display focus on the motif of the seated figure, a connection to Seated (2022), Self’s first public sculpture that has been commissioned by Avant Arte. A further interrogation into what separates the public from the private, the works introduce new iterations of the archetypal characters depicted in Sounding Board. Two life-sized bronze figures – a material synonymous with monuments of the important and mighty – sit on chairs, becoming part of the furniture. Surrounded by large-scale paintings on paper and canvas, the abstracted figures form props for Self’s stage, where the home and the body can only be one.