‘… works of art are the most intimate and energetic means of aiding individuals to share in the arts of living.’
‘Art as Experience’ by John Dewey, 1934 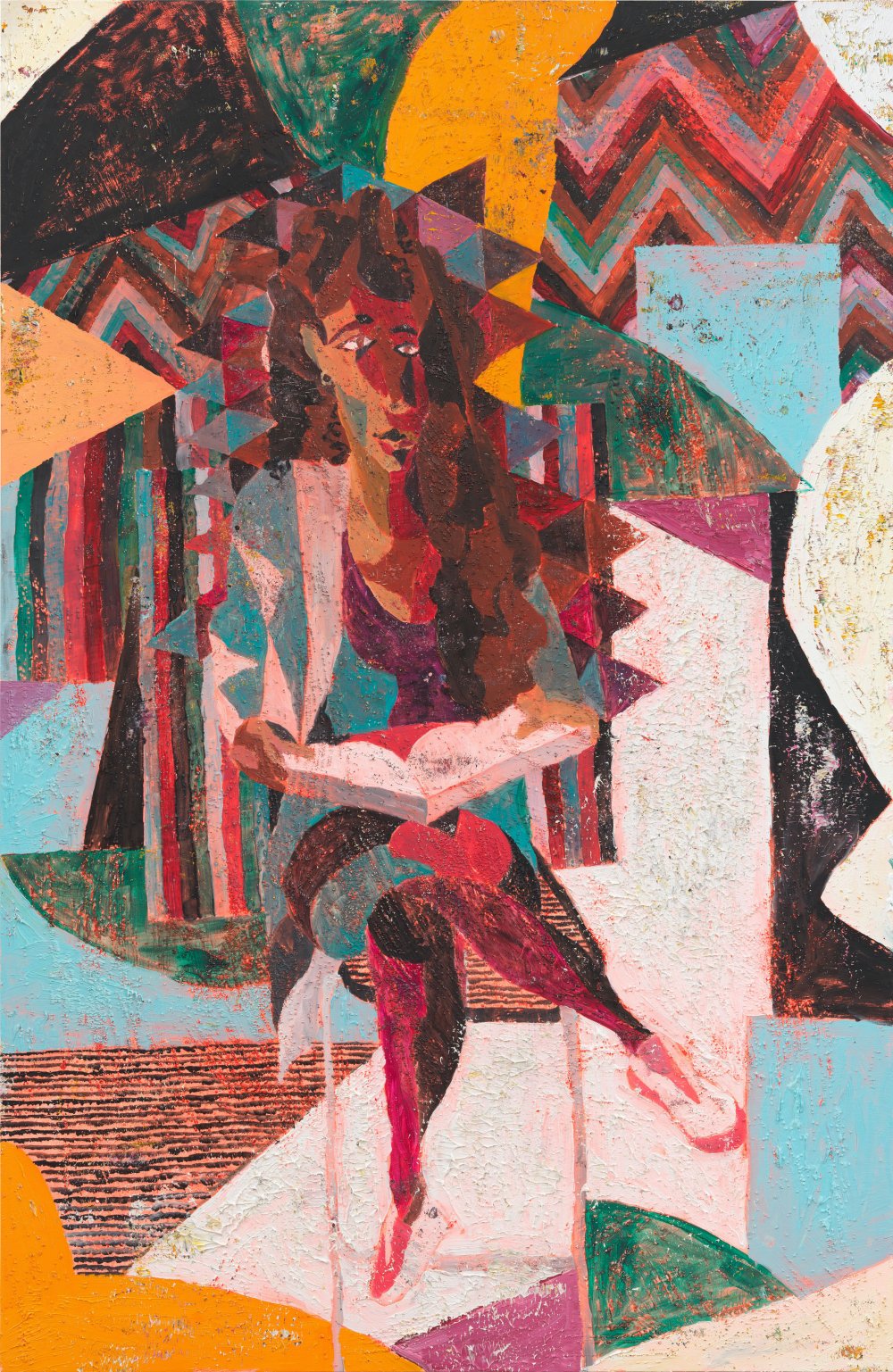 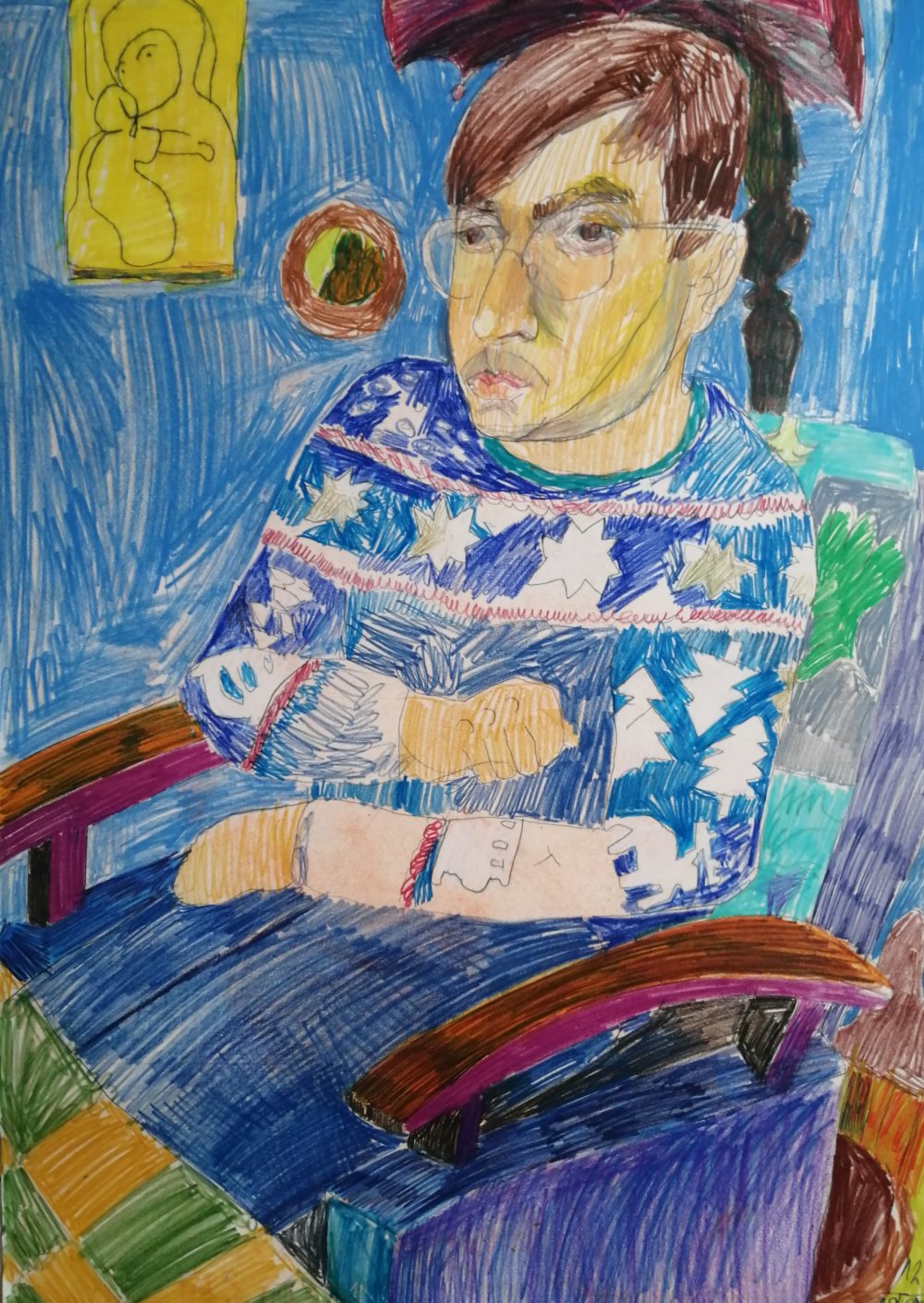 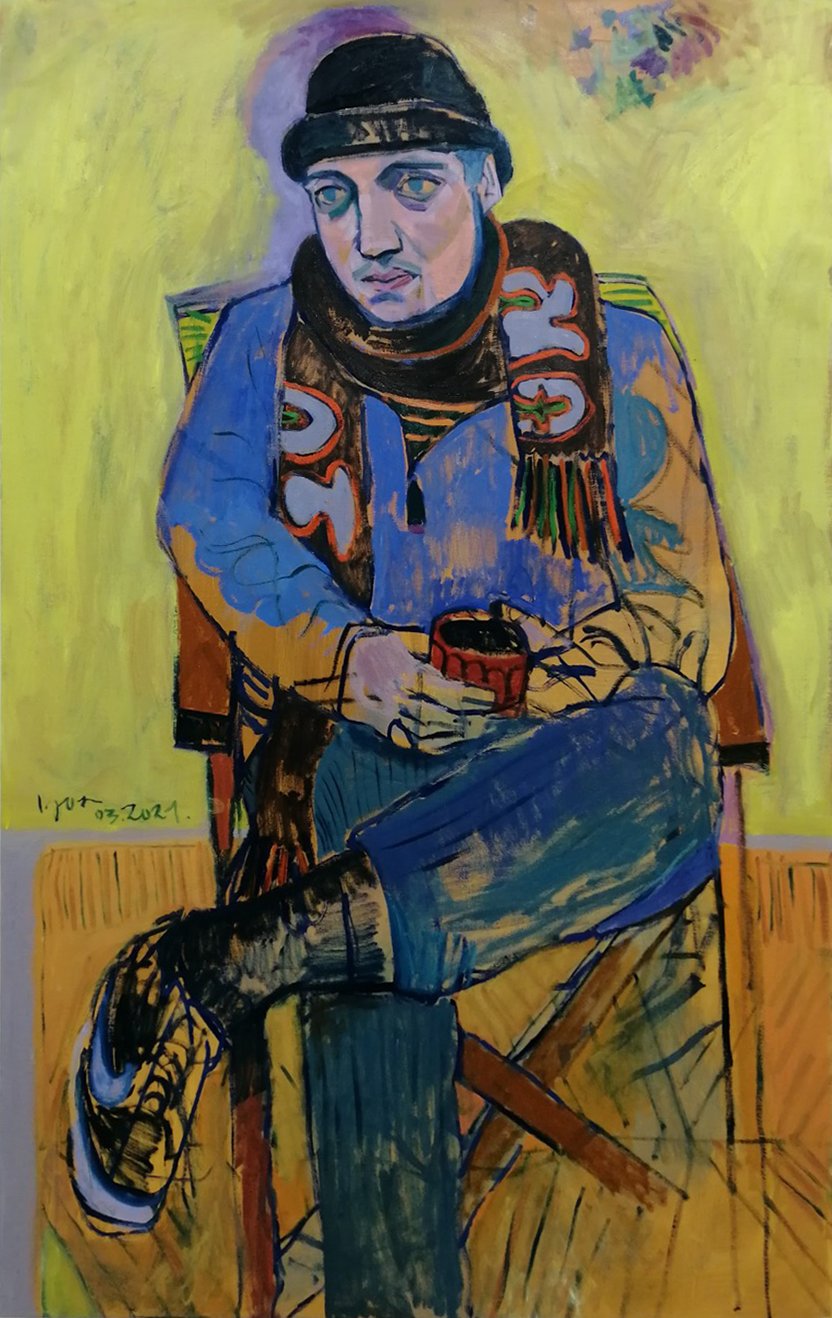 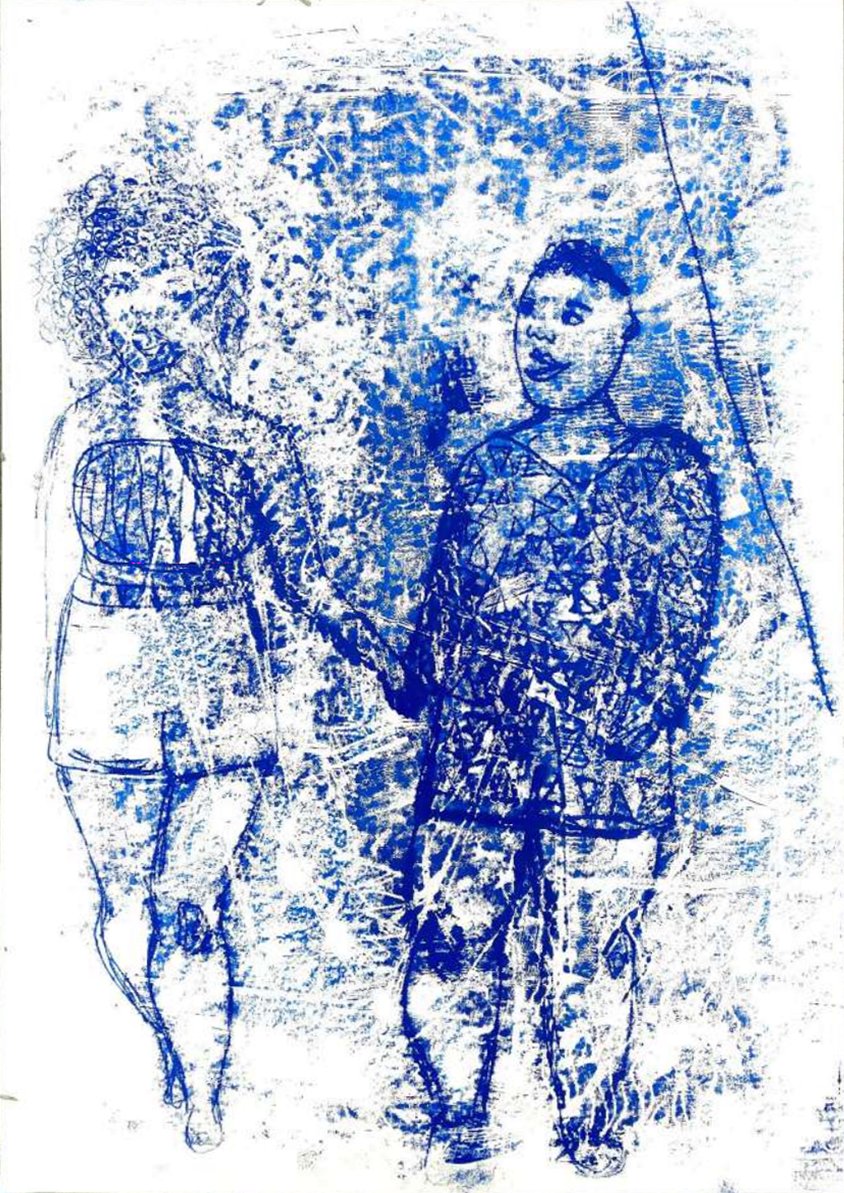 Monoprint on paper
A1 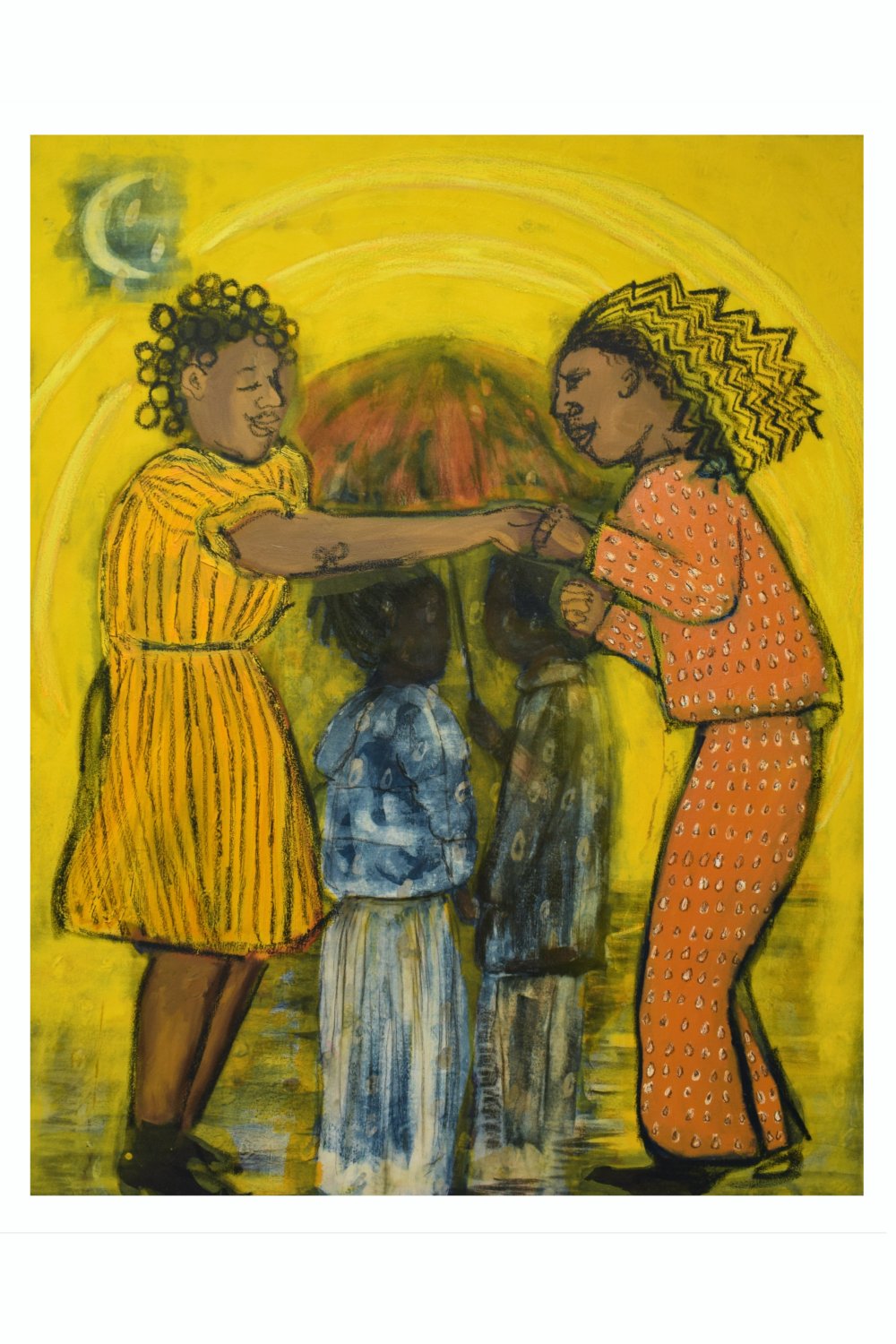 Sola Olulode
Whatever the Weather, 2021 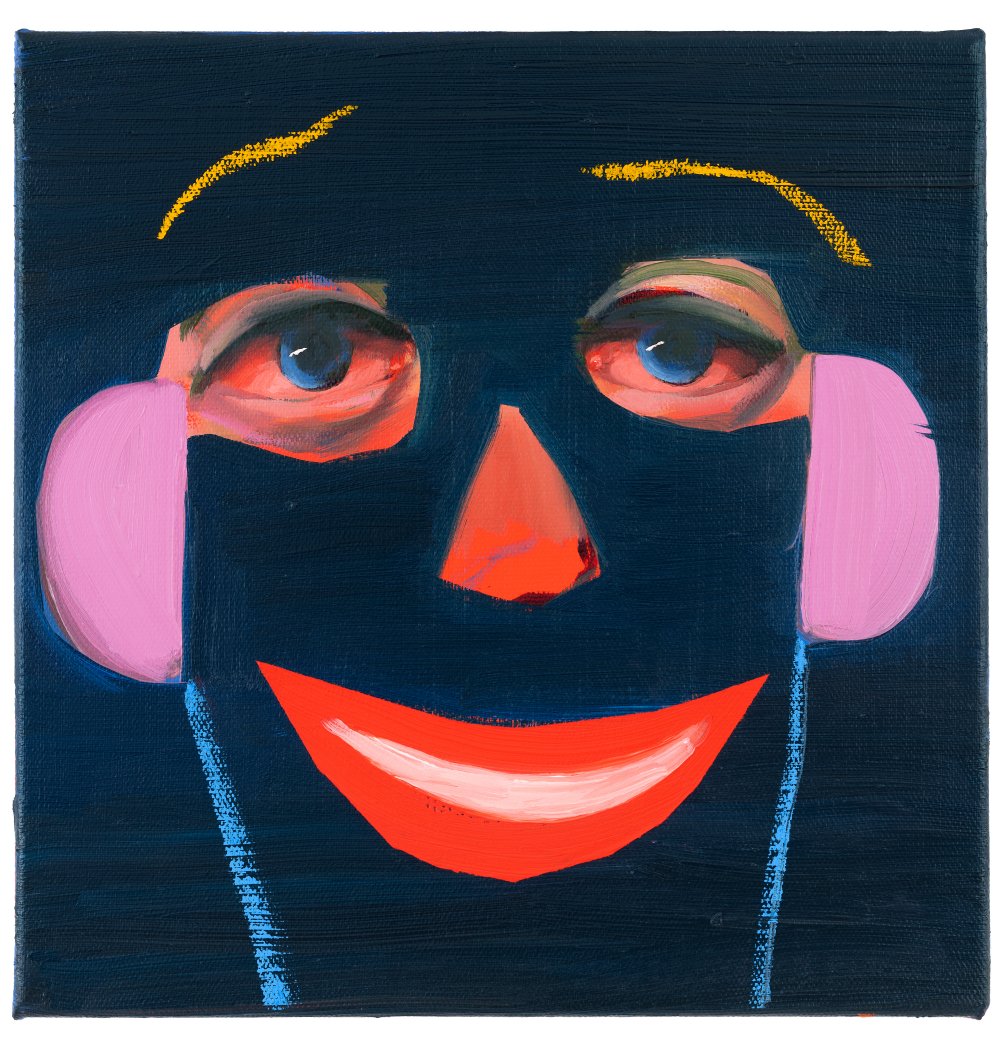 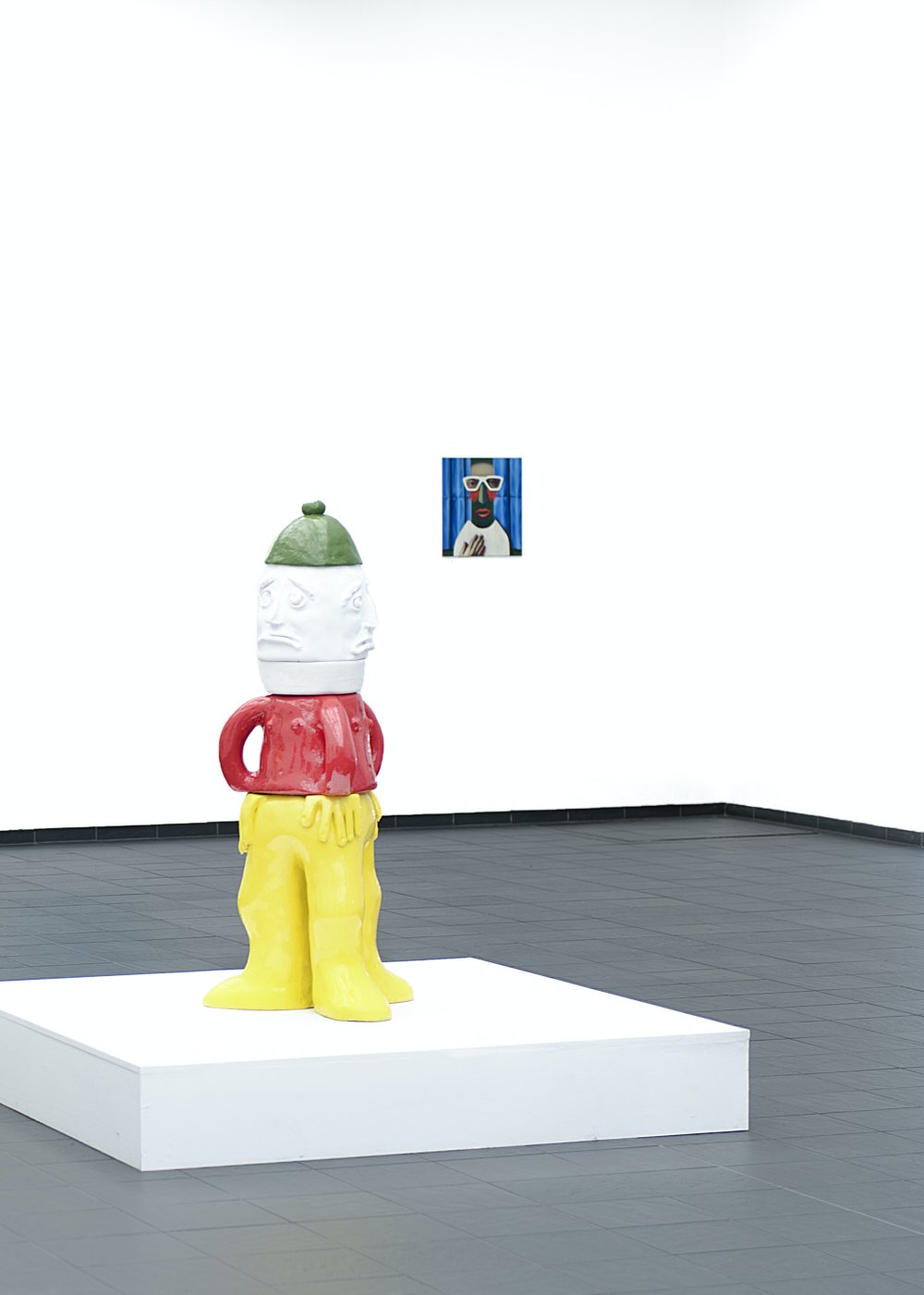 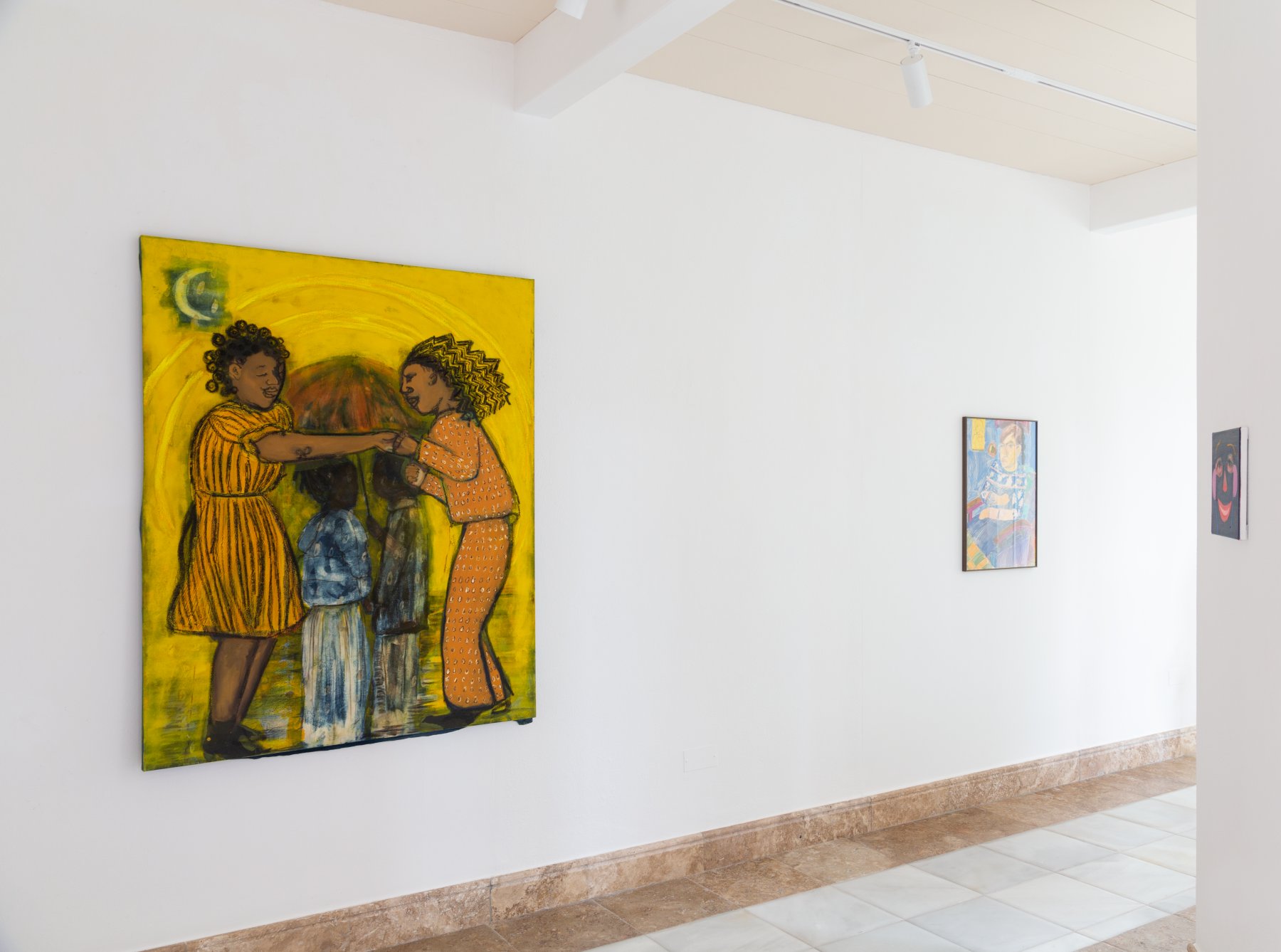 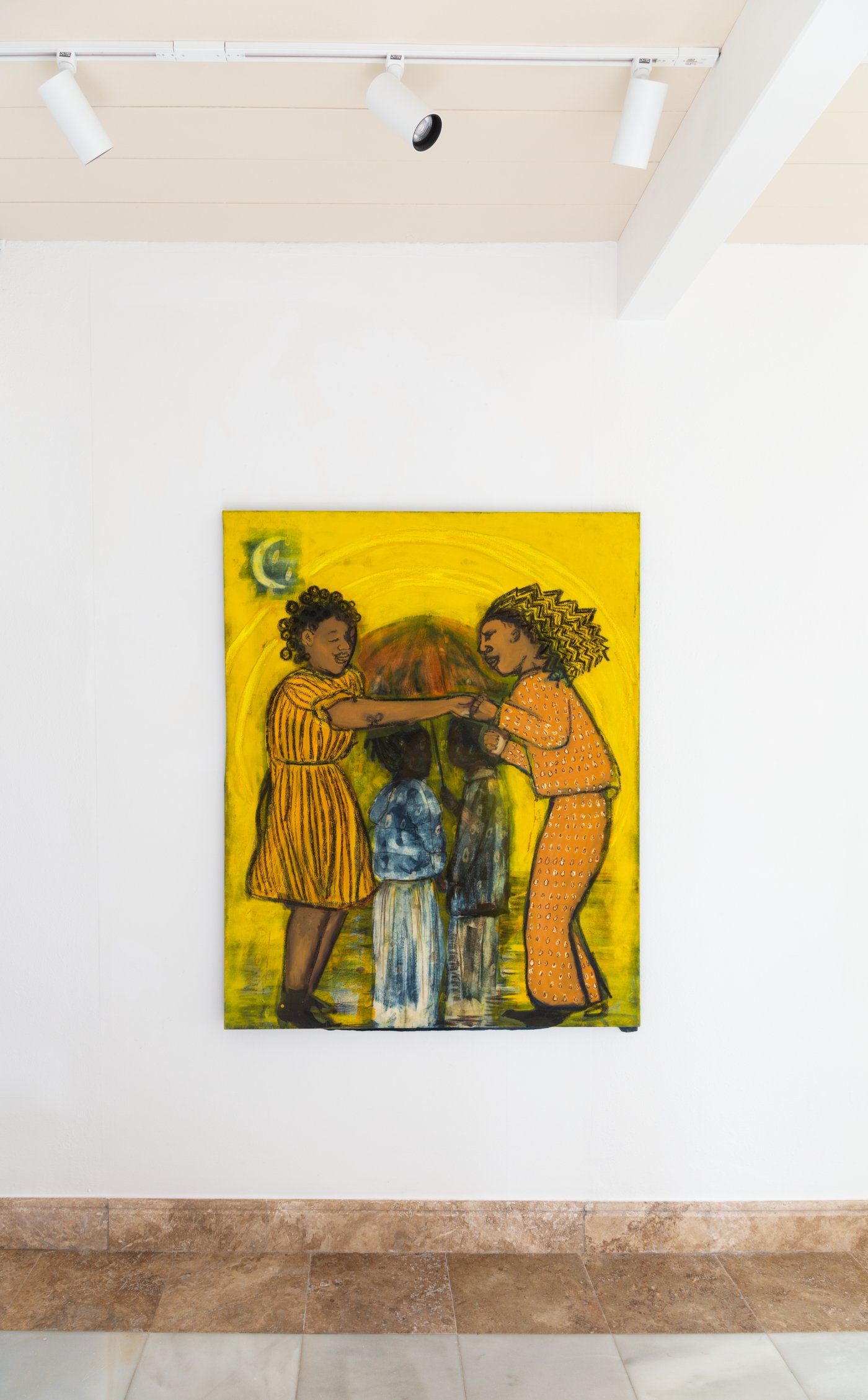 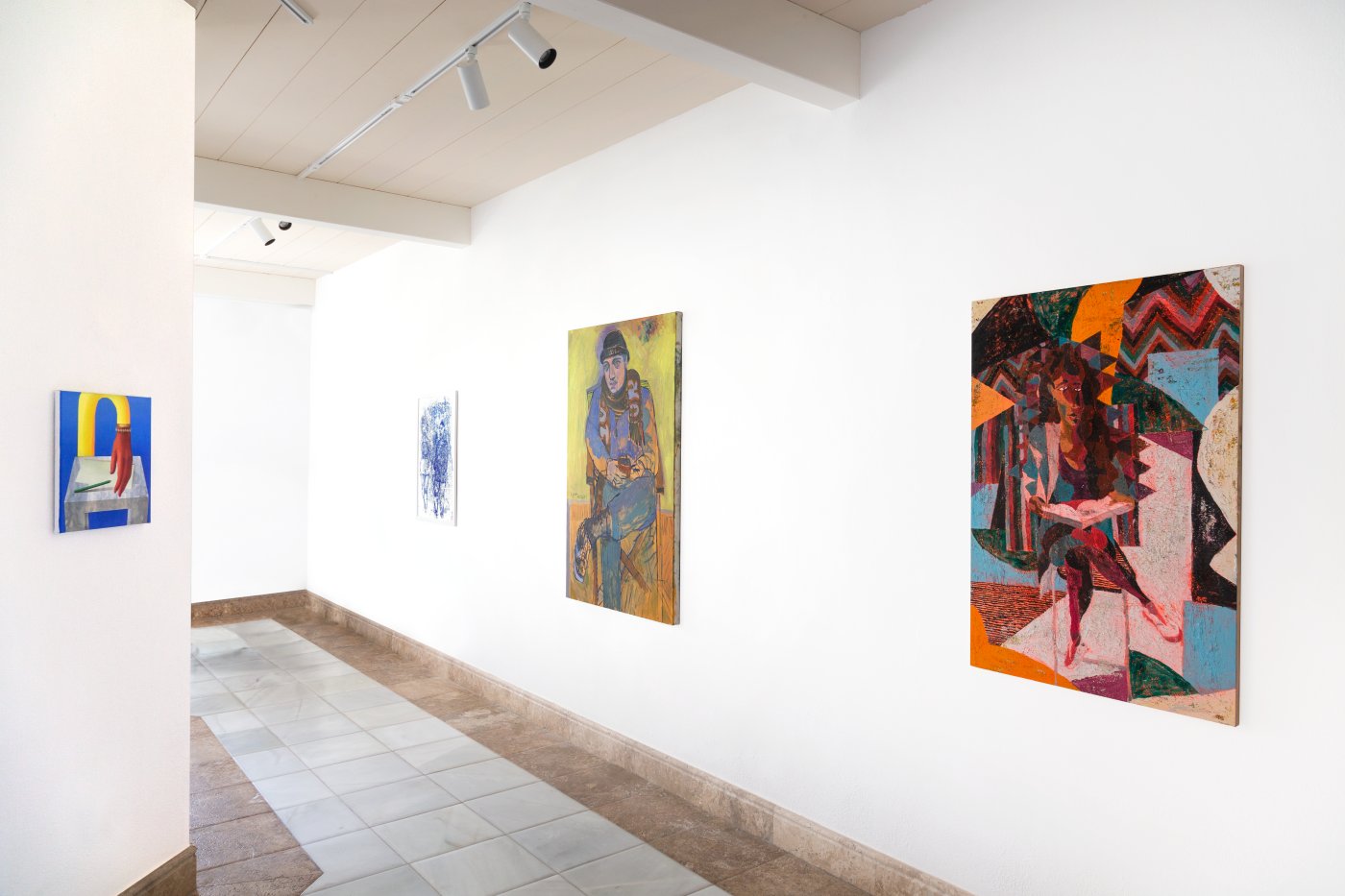 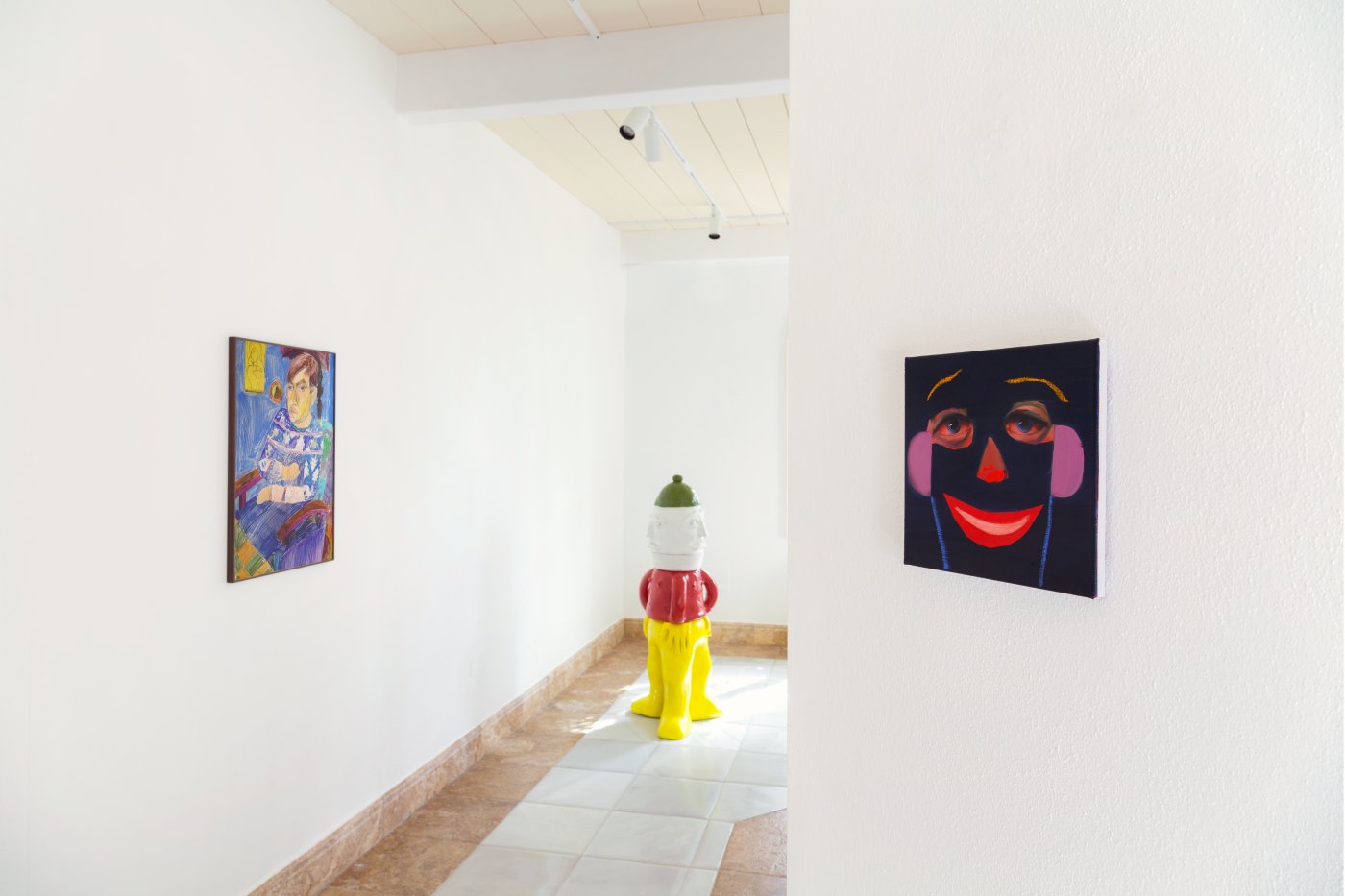 In art, the presence of physicality breeds symbiosis. An exchange between artist and observer that relies on the act of creating to understand the creation itself. Such record of activity resides principally in the process. When this becomes visible, when an artist consciously leaves traces of life, encountering their work surpasses casual viewing to convey the purity of imperfection and complexity of human expression.

The works of Tom Anholt, Igor Moritz, Sola Olulode and Ivana de Vivanco in ‘Trace Evidence’ divulge material and mental environments through narratives of a shared cultural existence. This exhibition inquires into the necessity of biography, referencing fundamental understandings of essayist Roland Barthes doctrine of the ‘death of the author’ and how character need not condition interpretation. It instead favours those shared glimpses of circumstance, episode and incident. Art as lived experience.

Chilean-Peruvian artist Ivana de Vivanco extends an invitation to unveil obscured identities and histories, pursuing disclosure in the materiality of clay and oil. She stands out for the theatricality of her pieces which are equally as dramatic as they are discreet. The composition of ‘Western Hand’ bridges the chasm between figuration and abstraction to offer a metaphor for the writing of history amidst a prism of colonialism. Finding continuity within clandestine occurrences and sufferings universally recognised to constitute such, de Vivanco alludes to the complexities of emotion. The painting ‘Recognition Failure’ is reactionary in attempting to read greed, grief and guilt, expressing the impossibilities of omniscience both in reality and in paint. The sculpture ‘Triple Drama’ is contradictorily vivid however, in it’s unmasking of melancholy, is made humorous in an adoption of primary colours and cartoon-like semblance.

As the characters emerge, these reveal patchworks of process. The artists in ‘Trace Evidence’ care for the phase of experience in which the artworks come to life. For this very reason, they do not shun moments of resistance and tension, instead cultivating them for their potential to bring spirit to a static scene. In the paintings of UK-based Tom Anholt, material traces are detected in contrasting textures that pull up stories from the past and present. The imaginary portrait ‘The Merchant’s Daughter’ emerges from its layered surface. Actions of destroying and rebuilding, where elements have been scratched into and wiped away, are reminiscent of an exploratory exercise of origination. Conscious of the tendency to become absorbed by detail, Anholt creates distance in his still life ‘Lisa I’. Placing emphasis on movement and modification, a wood board is prepared with beads of glue and thick oil skins like scars, telling a story of what came before.

The tactile painting ‘Whatever the Weather Study’ by British-Nigerian artist Sola Olulode embraces this investigation, distorting time and space by recasting one of her earlier works. Enclosed by two dancing figures, faded remnants of the original lovers remain. The close and yet distant embrace is both tinged with nostalgic raindrops and embraced by glorious sunshine. A crafted moment entrenching sadness and joy, opposites that are often quite prone to finding each other. The work becomes more than simply a rough redoing to acknowledge evolution as it interweaves notions of intimacy, memory and relief.

In scenes that place value on life as a series of forged connections, Olulode exemplifies experience as a bi-product of an interaction between the organic self and one’s surroundings. Monoprints ‘Walking Study’ and ‘Falling in Love’ depict the warm embrace of queer love where excess ink transferred from one to the next, continuing an anecdote of nostalgia and impression of touch.

Believing too that art is being; being faced with oneself or with the other, Polish born Igor Moritz uses his personal experiences to create familiar portraits that explore the juncture of the inner essence and the outer world. His painting ‘Christi drinking coffee in Balaklava’ and drawing ‘Błażej in Christmas Sweater’ flirt with mimesis while breaking all rules of perspective, proportion and realism. In the mundanity of his repeated subjects there lies a subtle appreciation for the deeply personal, the everyday interplay and conversations that are dismissed as insignificant. Mortiz’s pieces are raw moments to be recorded but also forgotten, but that are never seen in completeness. A leg cut at the knee or torso disproportionately filling the space hint at the same vein of vignettes of wider stories.

‘Trace Evidence’ is a group exhibition that guides us around a succession of works analogous in their characterisation of a susceptible existence.

‘The task is to restore continuity between the refined and intensified forms of experience that are works of art and the everyday events, doings, and sufferings that are universally recognized to constitute experience.’