“With this project we break down the borders and eliminate the concept of nationality.

This comes at a time where our liberal democracies are being threatened, and oppressed people all over the world live in danger and without refuge.

Borders are artificial, created by governments and the corporations who control them.

Swiss Passport Office represents enforcement of their artificiality, the antithesis of freedom, and the movement of people and goods.

With Swiss Passport Office every man and woman may be Swiss.” Tom Sachs 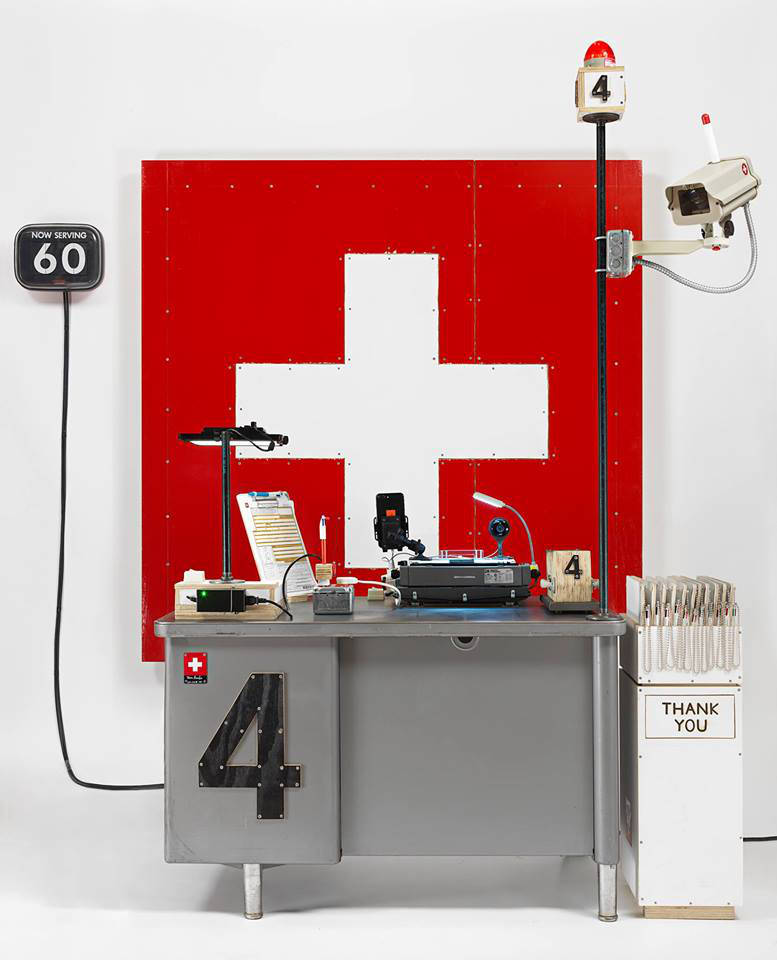 Between 6pm on Friday 5th October and 6pm on Saturday 6th October, visitors can be issued with a Swiss passport at a cost of €20 (no British pounds will be accepted). Those wishing to purchase a passport will be photographed and have their name hand-typed onto a serial-numbered Tom Sachs Studio passport, stamped with a Studio endorsement and entered into the permanent database. Following this 24-hour period, the Swiss Passport Office installation will remain on view at the gallery until 10th November, but closed for the issuing of passports.

An installation of international significance, Swiss Passport Office encompasses contemporary concerns relating to Brexit, Syria and Trump’s immigration policies and their challenge to the notion of global citizenship.

“To effect change, we must first imagine the world not the way it is, but the way we want it to be.” Sachs says.

“The Swiss passport is the most prestigious brand name in international identity.” Tom Sachs

For Sachs, Switzerland is a nation of boundaries: geographically it sits in an imposing mountainous landscape; economically it acts as a shelter for extreme wealth; and politically it holds a status as an EU non-member state and was a safe haven during times of war or persecution. Swiss citizenship is “the ultimate status nationality, representing wealth, neutrality and freedom”; a status Tom Sachs wishes to make available to all.

As a sculptor Sachs is perhaps best known for his elaborate, bricolage recreations of masterpieces of engineering and design. In an early show he made Knoll office furniture out of phone books and duct tape; later, he recreated Le Corbusier’s 1952 Unité d’Habitation using only foamcore and a glue gun. Major projects have included a home-made life-size Apollo Lunar Excursion Module and a McDonald’s restaurant created using plywood, glue and assorted domestic kitchen appliances.

In 2017 Tom Sachs created Tea Ceremony for The Nasher Sculpture Center, a distinctive reworking of chanoyu, or traditional Japanese tea ceremony—including the myriad elements essential to that intensely ritualistic universe. In the Nasher’s indoor galleries, Sachs created a tea house in a garden accessorised with variations on lanterns, gates, a wash basin, a plywood airplane lavatory, a koi pond, an ultra HD video wall with the sublime hyper-presence of Mt. Fuji, a bronze bonsai made of over 3,600 individually welded parts, and other objects of use and contemplation, all made from commonplace materials easily procured at local art supply stores or through the McMaster-Carr hardware catalogue.