‘It’s as if the world, its creatures, the insects living in my studio and shepherd’s hut, the leaves thrashing around like moving castles above my studio, the wildlife in the pond and paddock, the night sky, the barn owl and pipistrelle bats, both flying at dusk – as if all this is somehow in me and me in the work, like us in lockdown, so much more has been revealed to so many of us’ – Tom Hammick

‘Hammick’s images ….seem to posit that Freud was right when he said that making art is magical thinking – as dreams are…’ Donald Kuspit, Art Forum

Lyndsey Ingram presents an exhibition of new work by the British artist Tom Hammick. Entitled ‘Nightfire’, this is the gallery’s first solo show of Hammick’s work to be held in their Mayfair space, as well as the first time his paintings are presented alongside his woodcuts, etchings and aquatints. 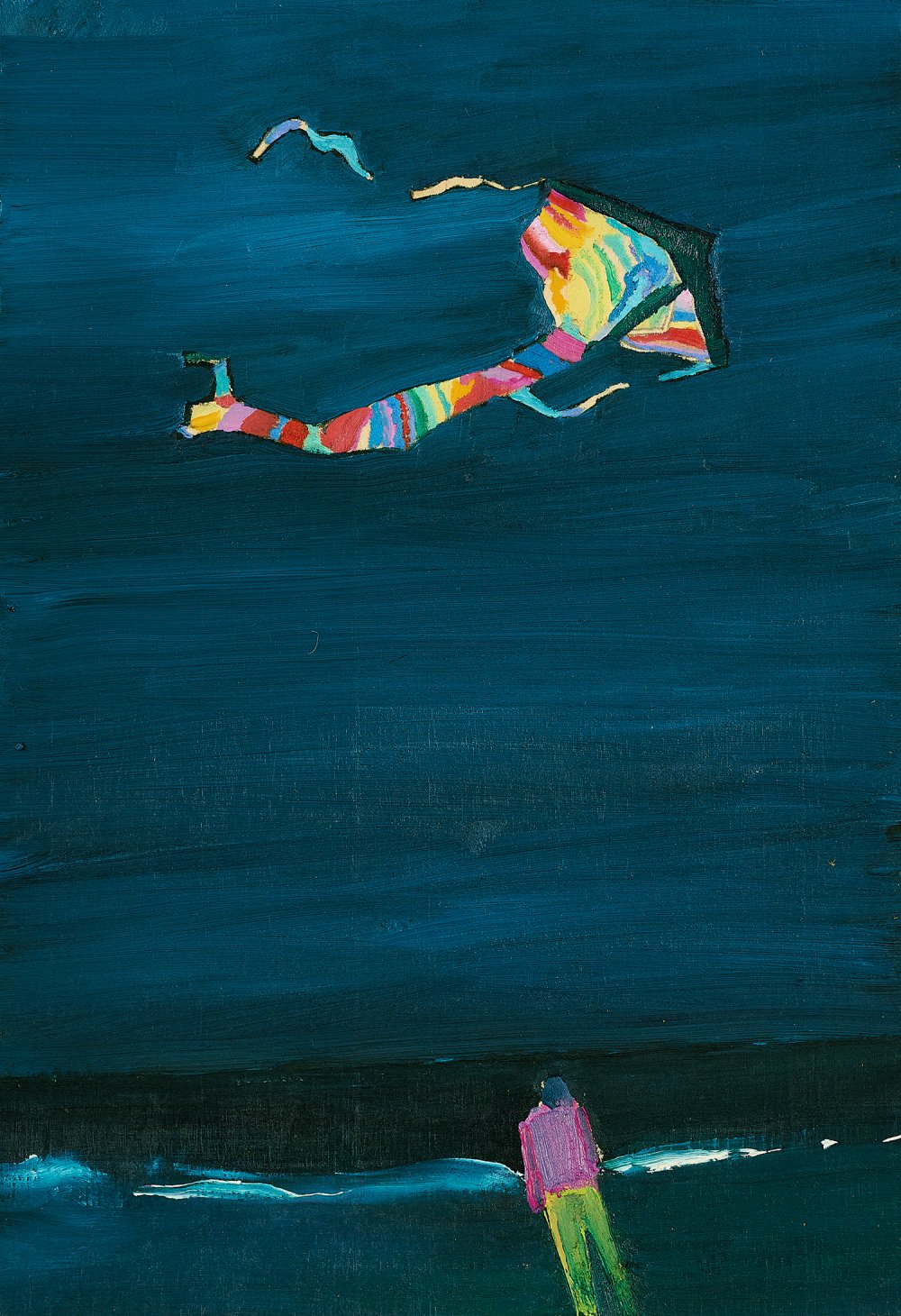 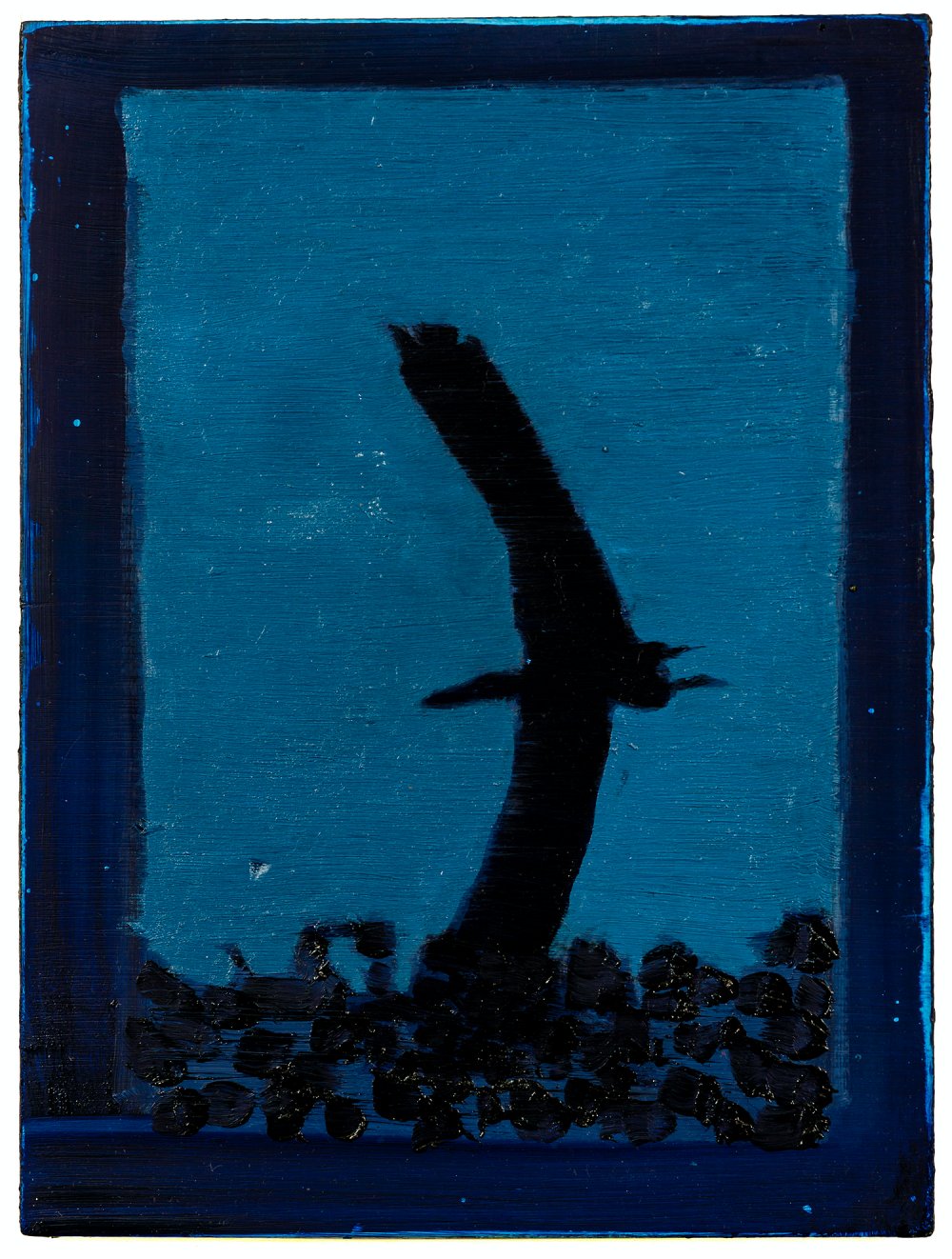 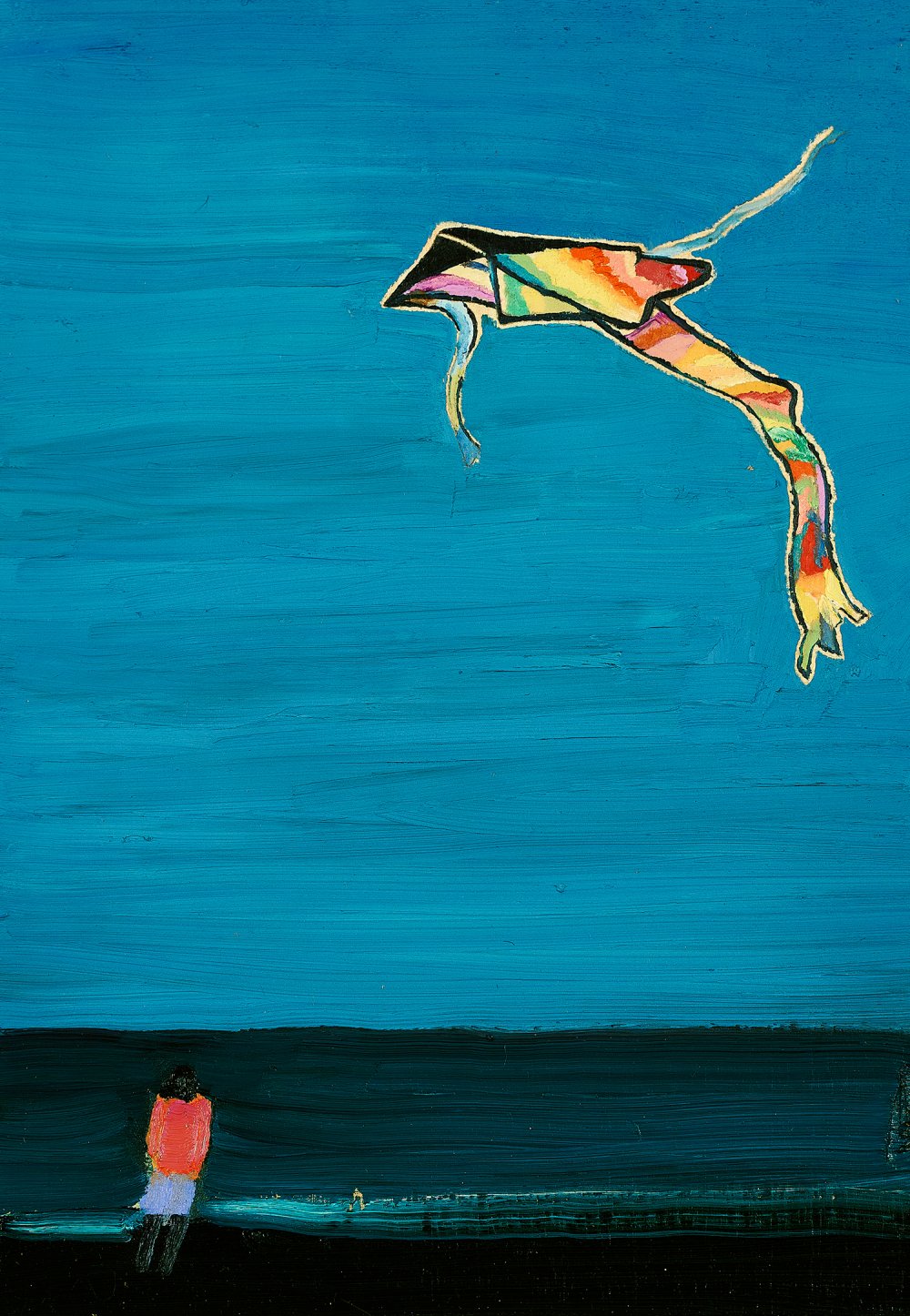 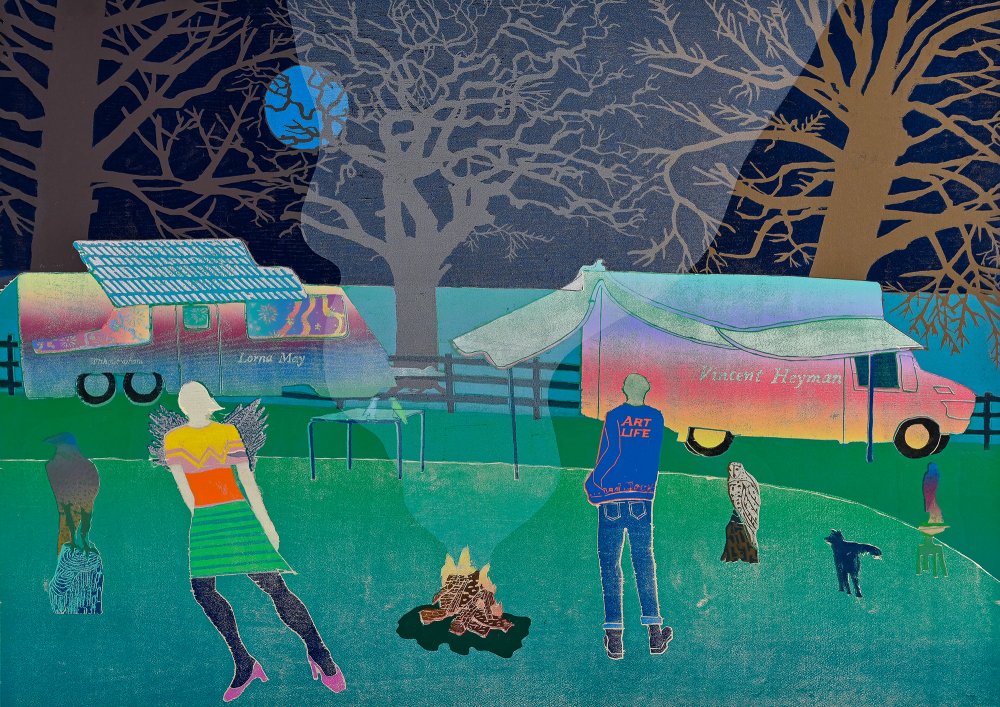 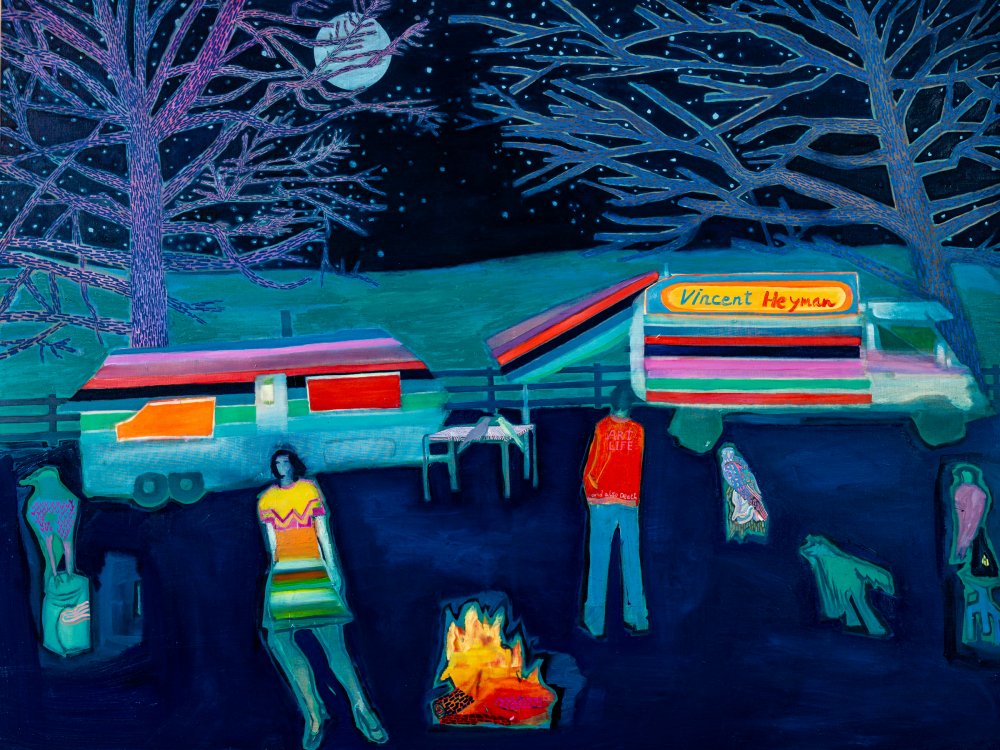 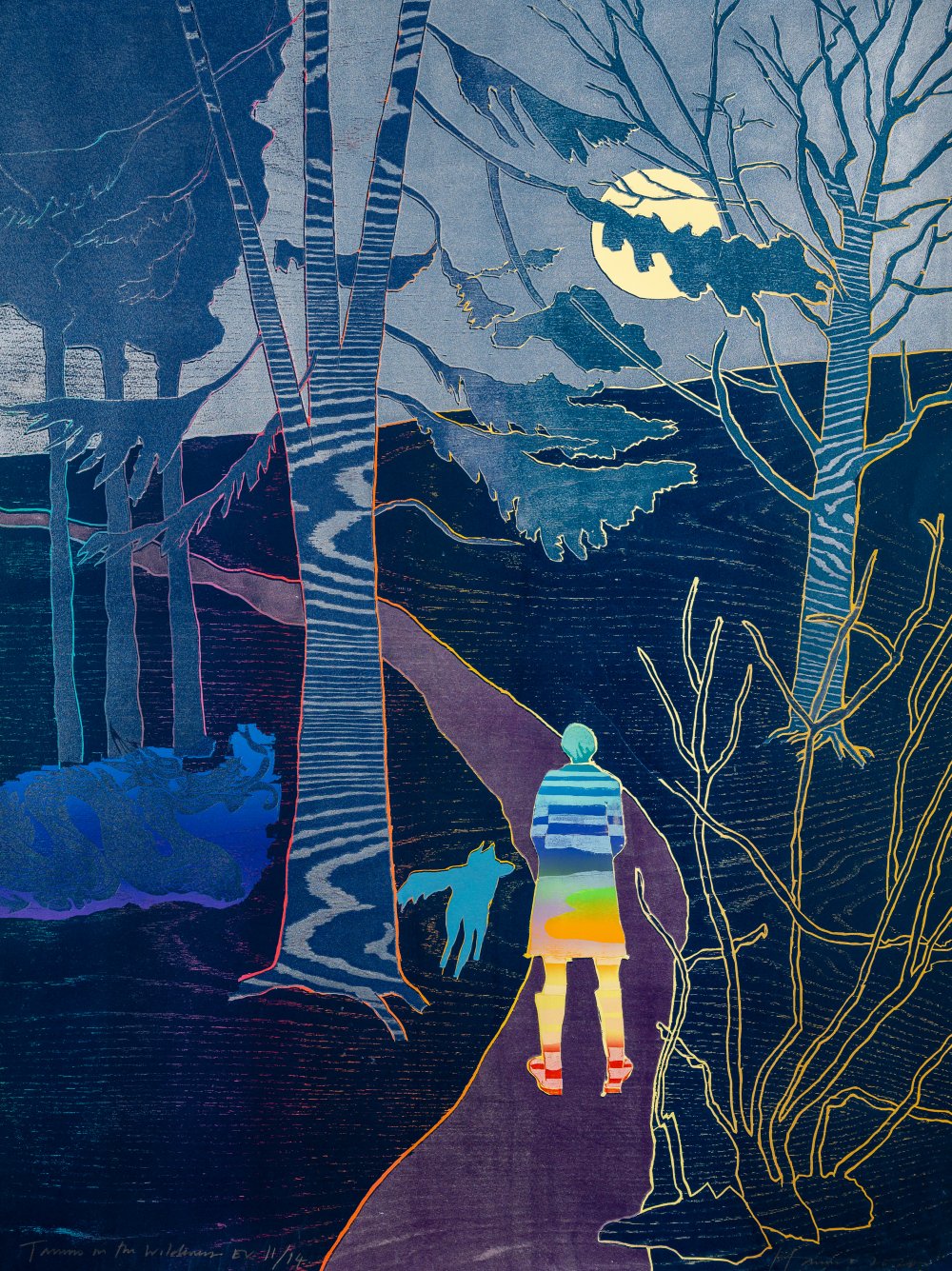 Tom Hammick
Tamino in the Wilderness, 2020 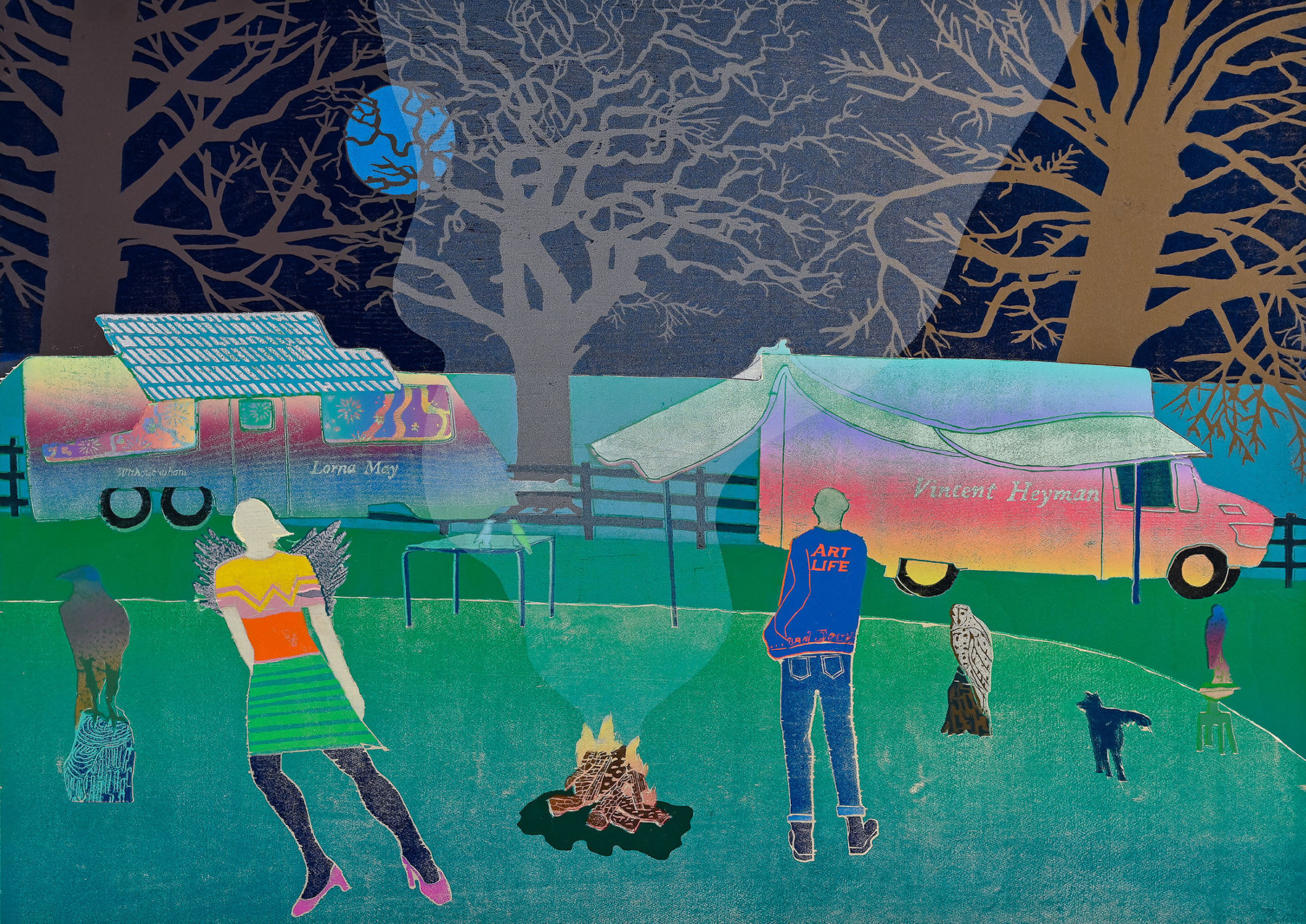 This exhibition was first planned for spring 2020, but due to lockdown was postponed until the autumn. In the intervening months, Hammick completed this new body of over 20 works in various mediums, as he spent this period in isolation at his home in the English countryside near Battle in Sussex.

While Hammick’s familiar subjects of his family and the forested nature and sea beyond his studio reappear, the new works appear charged with an almost electric energy. Natural phenomena that normally appear in his work, such as the darkness of the sky, became much more intense during the past months. This inspired the artist to look afresh at the world around him and to focus even more on depicting the individual within the natural world.

As his 2019 publication with Adam Nicholson, The Making of Poetry: Coleridge, the Wordsworths and their Year of Marvel attests, Hammick has long been a passionate admirer of the Romantic tradition – in particular Coleridge’s ideas about recognising a pattern of the universe in nature. Affected both by the drama and solitude of the past few months, Hammick has sought to see the world in the everyday objects of his studio and local landscape, to glimpse the universal in the specific.

In the work on display at Lyndsey Ingram, Hammick reimagines his daily universe in an almost otherworldly palette: expressive colours appear as outlines or broad striations, fluctuating between heat and cold, joy and melancholy, taking the viewer on a sensory journey. With reverence for storytelling in all its forms, the new paintings bring his subjects to life with inspiration from epic tales, orchestral scores, and poetry.

Hammick has also broadened his imagery in the last year while he has been making work connected to Glyndebourne Opera Festival as Associate Artist from 2019 to 2021. The operas have, by their very nature, invested a new theatricality in his work and the title for this exhibition, ‘Nightfire’, in part reflects this. It is telling that the operas which have particularly influenced him are Mozart’s The Magic Flute, Wagner’s Tristan and Isolde and Beethoven’s Fidelio with their dramatic nocturnal scenes. In particular, he has created a monumental woodcut on an operatic scale, pushing the medium to the limit. This two-metre panorama based on the story of Fidelio, shows the passage of time and narrative laid out in a single image, as in a scroll painting.

The canvases, woodcuts and etchings presented here seem to be backlit, with a kaleidoscopic fracturing of colour, conjuring up cosmic flare paths, or an interplanetary piece of scientific equipment. The artist has recently been rereading the work of JG Ballard, and these paintings and prints make visual connections to the writer’s dystopian narratives about his heroes and antiheroes journeying through time and space in the universe.

While these paintings and prints are representational, they are not trying to represent reality. They bear witness to our difficult, unprecedented times, yet are also a positive expression of what art can be – an attempt to make something new and better.

‘It is important to tell the whole story of an artist. As well as showing Tom Hammick’s new work, this show will offer a broader view of his practice. Exhibiting the paintings and prints together provides a meaningful opportunity to see how these two media nourish each other and how he tackles the same subject in different ways, creating the richness of his work.’

Tom Hammick is predominantly found in either his painting or print studio in Sussex. Most recently, he has been a recipient of the Josef Albers Award 2020, and the Glyndebourne Associate Artist Residency 2020. He has been awarded several prizes including The V&A Print Prize and The RA Print Prize and many residencies in the UK and abroad. Hammick’s work is held in many national and international public collections, including the British Museum (Collection of Prints and Drawings); Victoria and Albert Museum collection of Prints and Drawings, Yale Centre for British Art, U.S.A., the Library of Congress in Washington D.C., the Bibliothèque National de France and the Fine Art Academy of Beijing.