Almine Rech New York presents an exhibition of new works by Todd Bienvenu. This is Bienvenu’s third solo exhibition with the gallery. 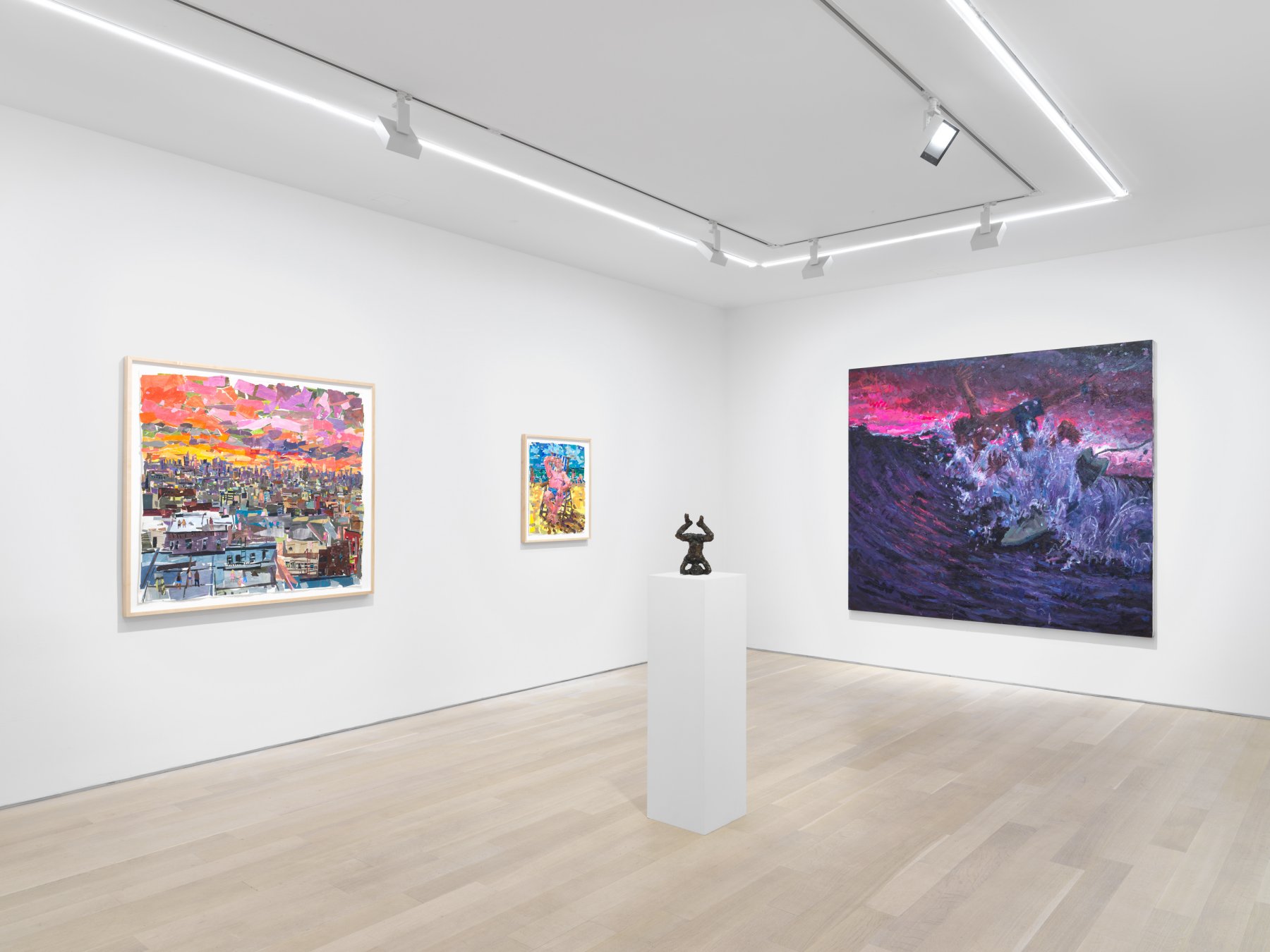 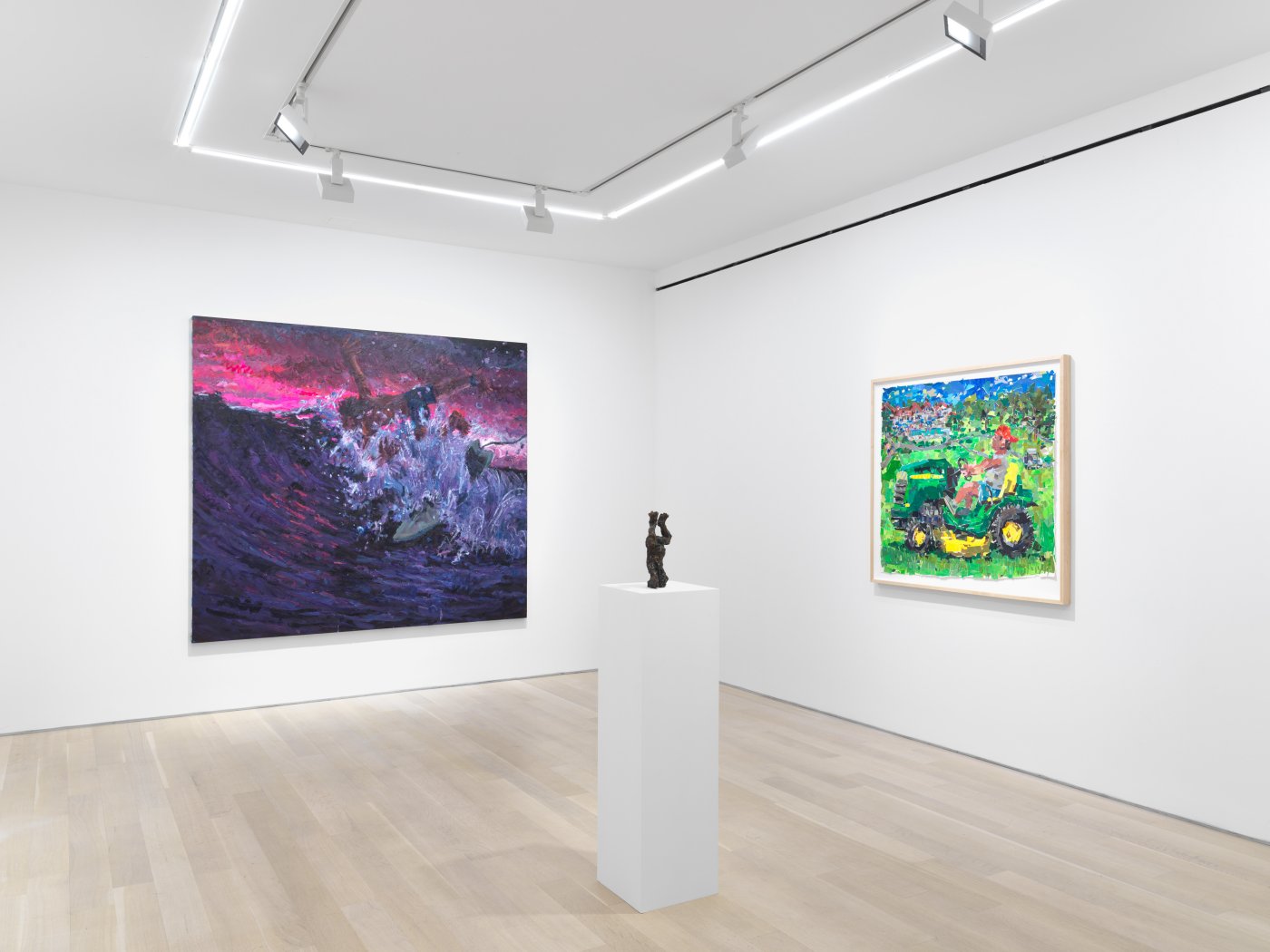 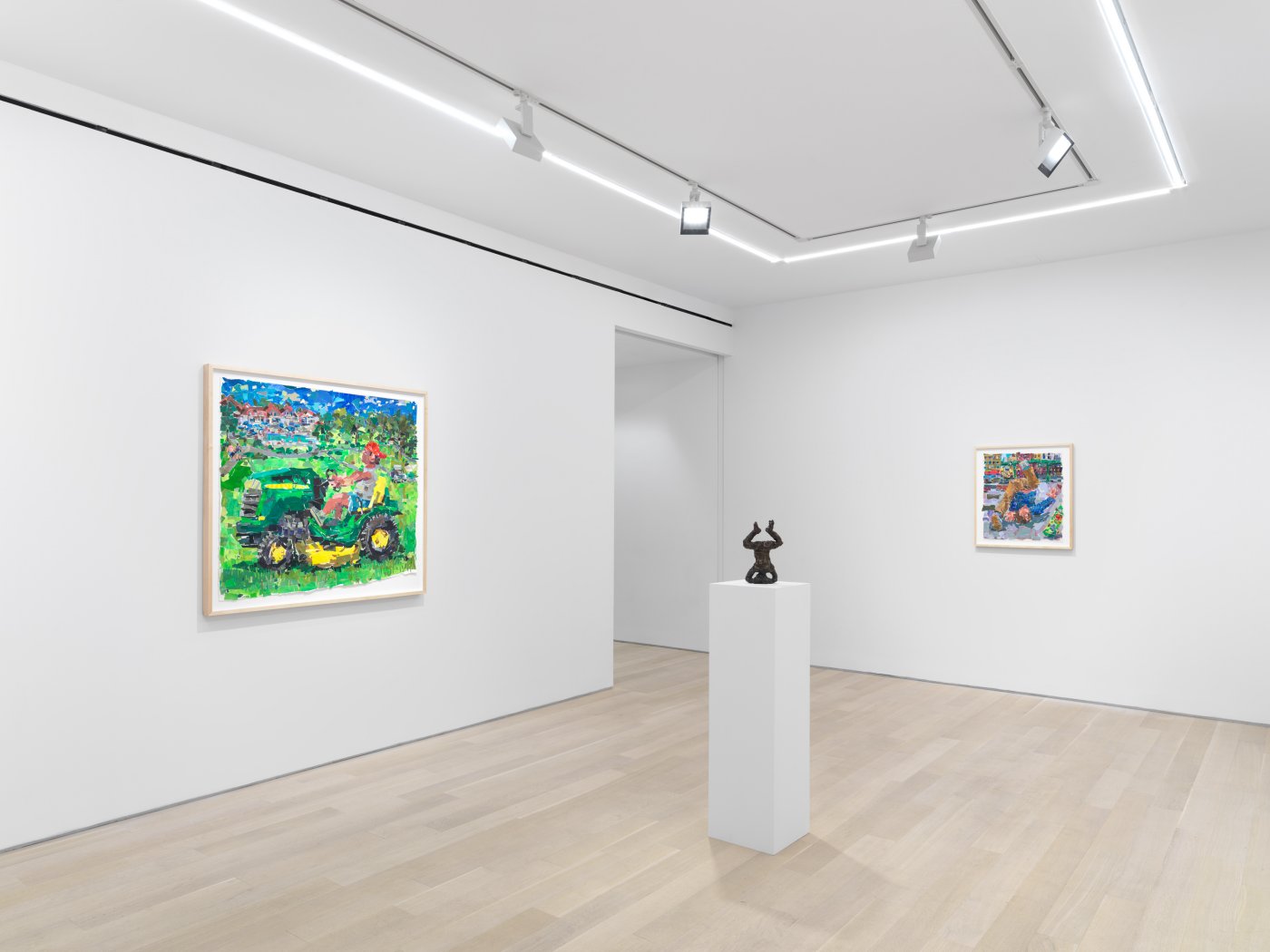 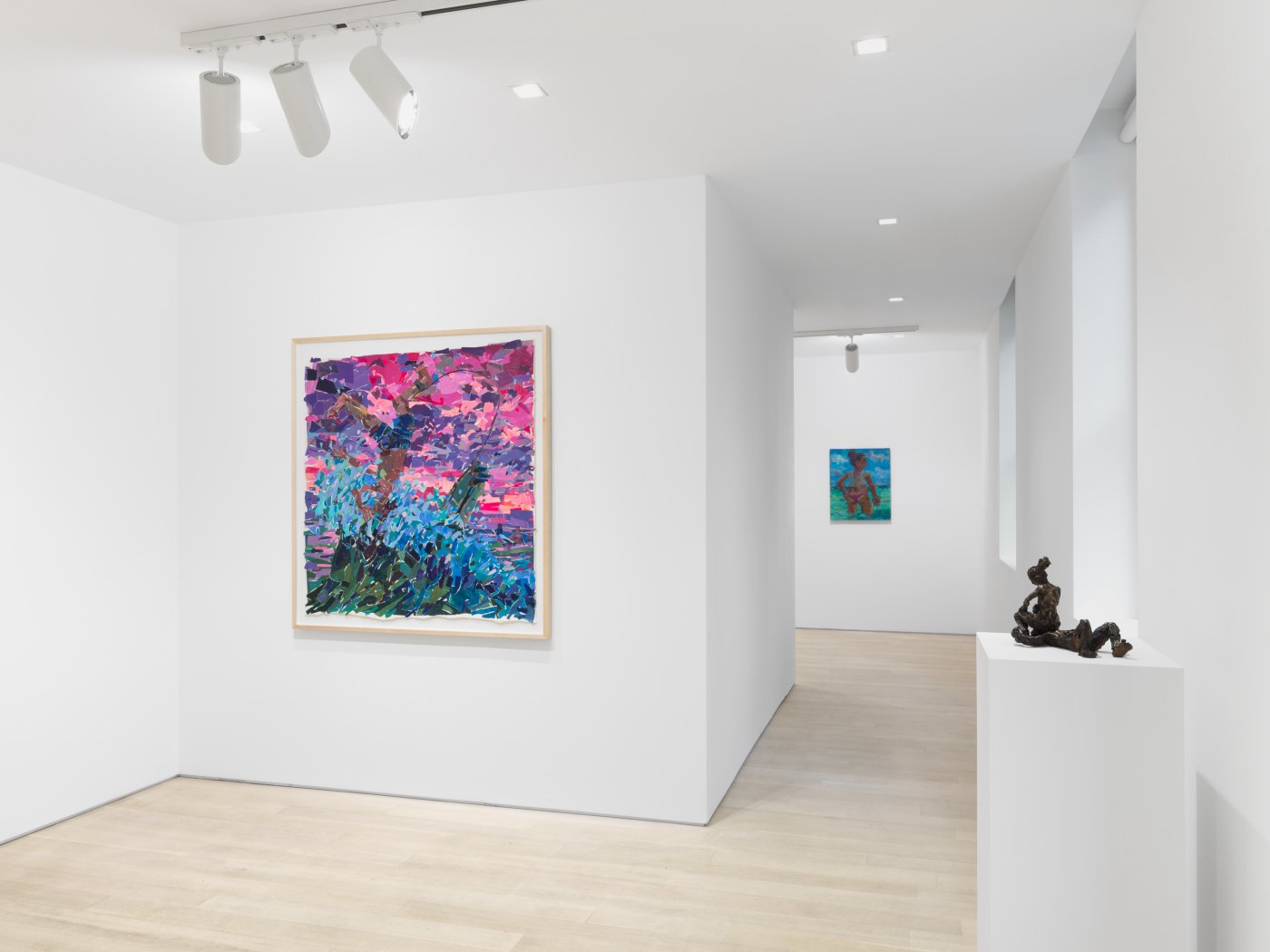 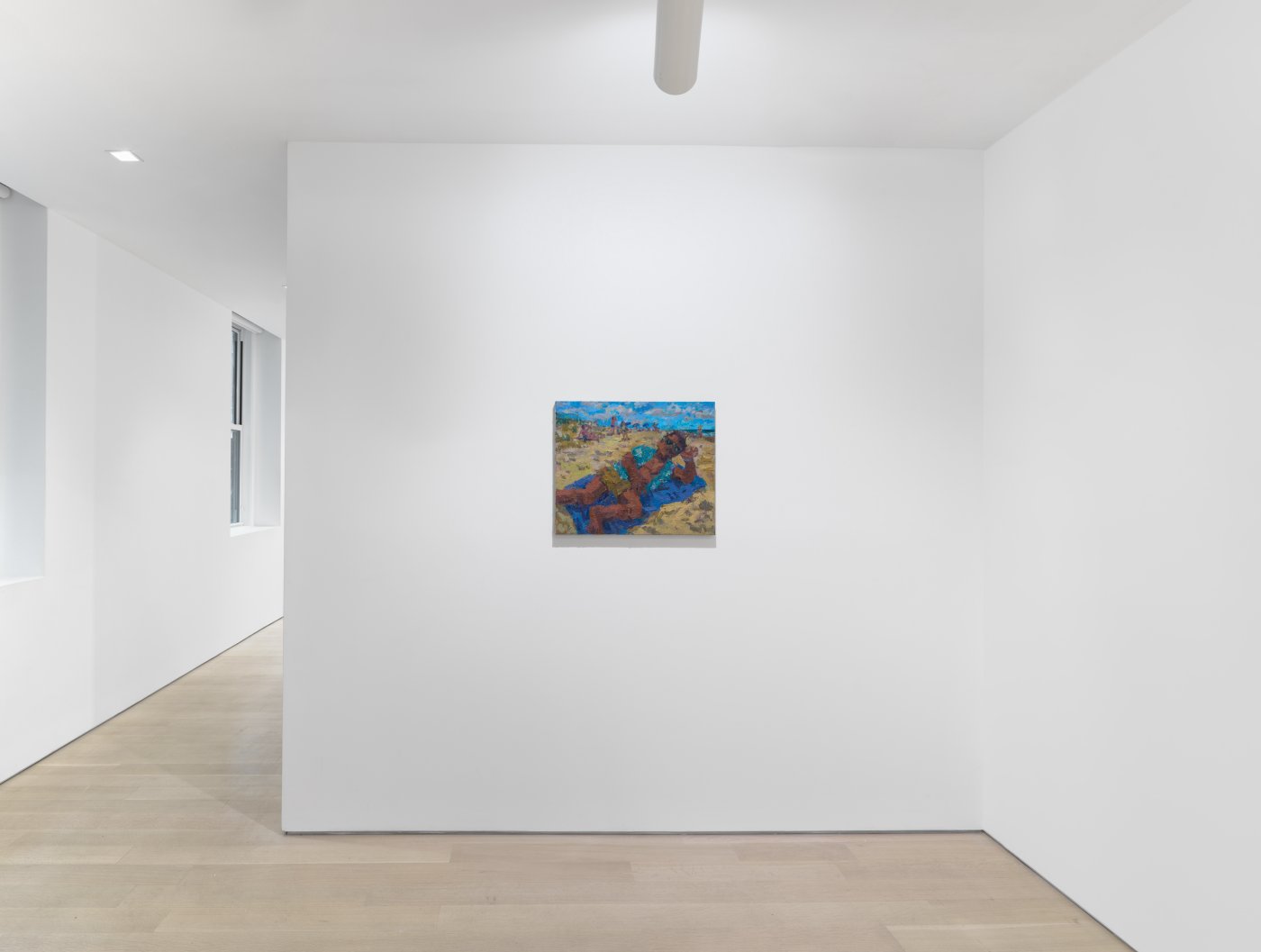 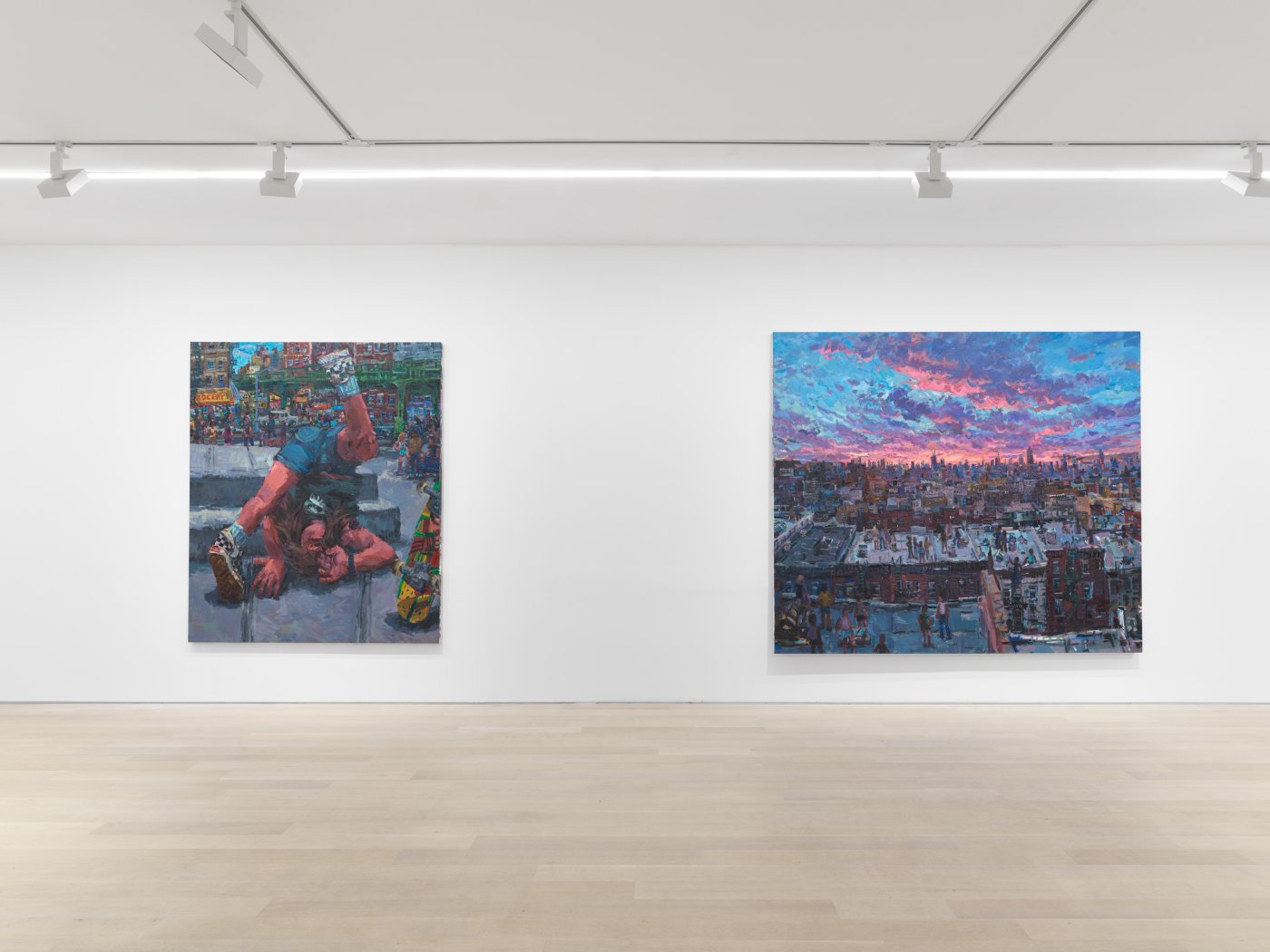 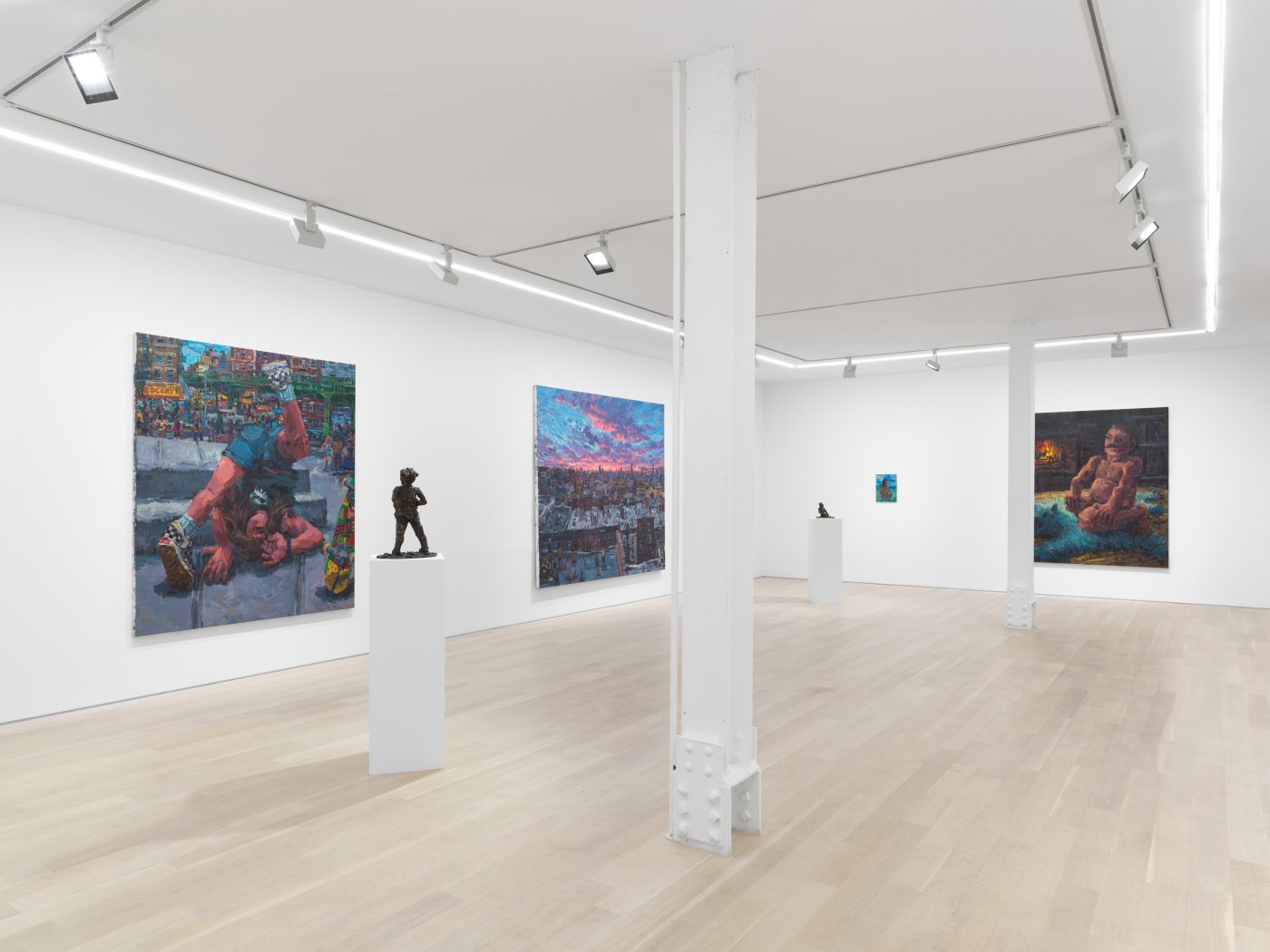 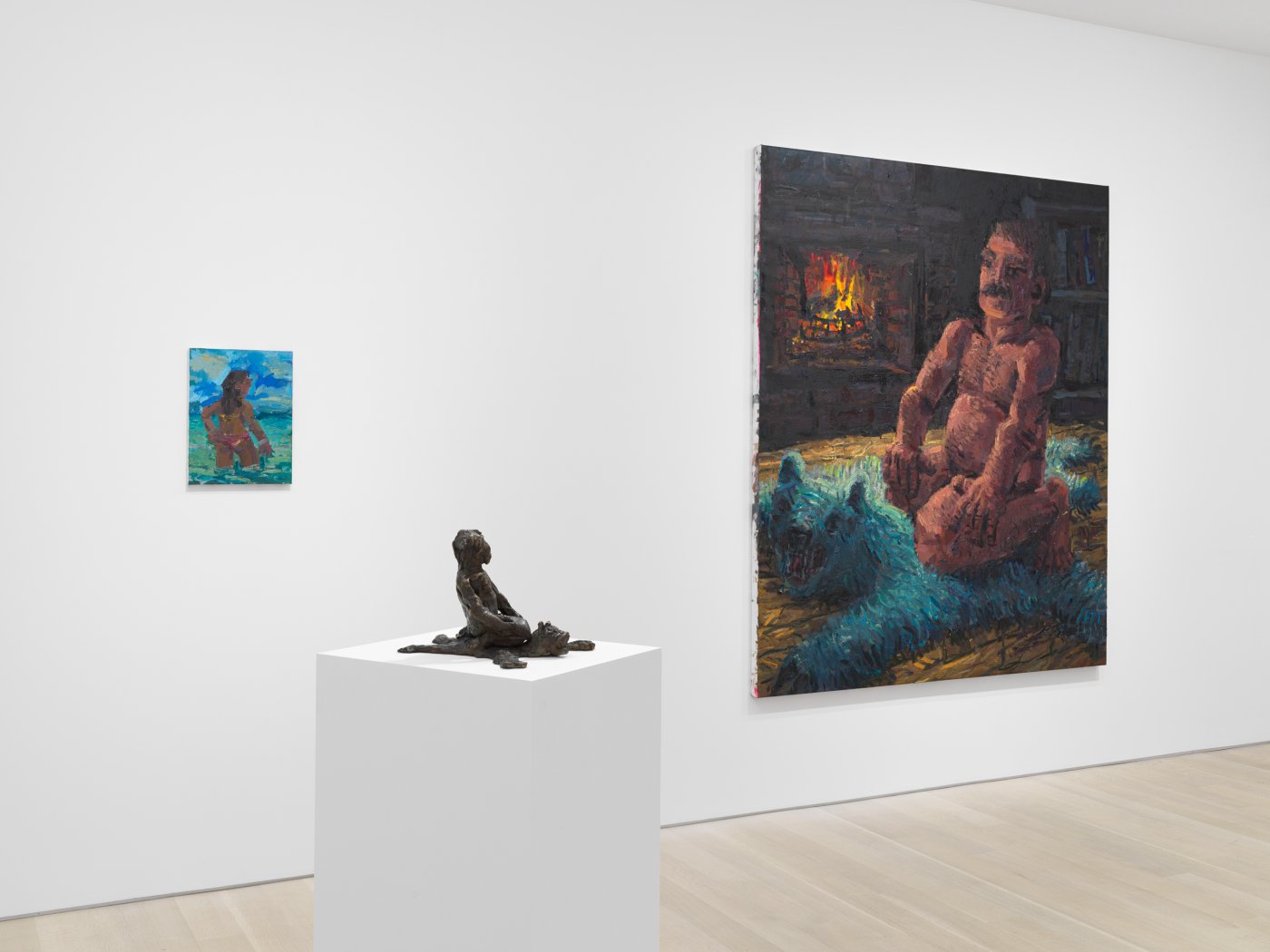 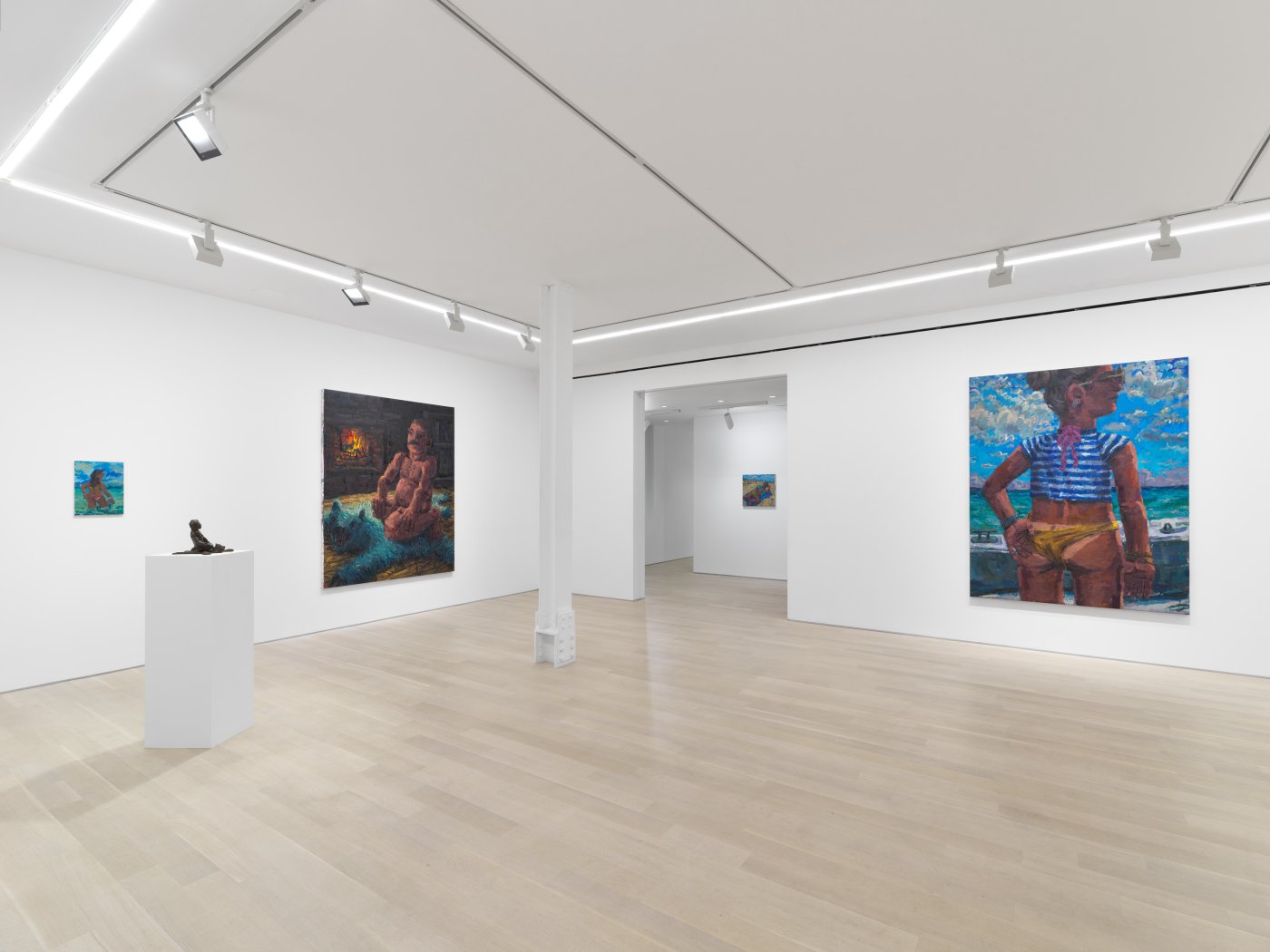 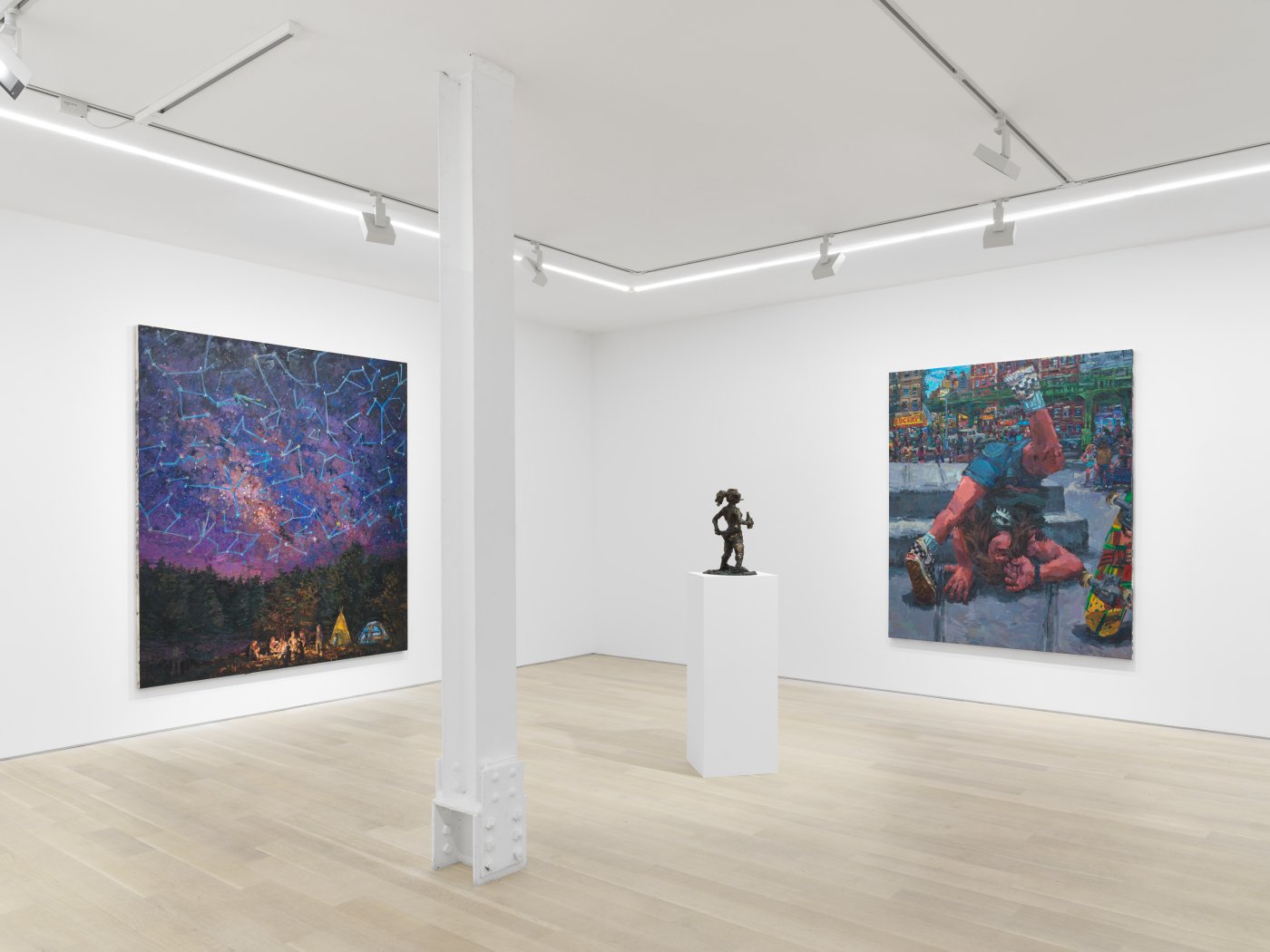 Raucously raunchy, hilariously disastrous, and blissfully chill, Todd Bienvenu’s pictorial imaginarium is a hotbed of flailing heroics, hot messes, and heated moments. By way of a thematically wide selection of paintings, collages, and sculptures in JOMO, the artist exploits everything in his toolkit and playbook in an attempt to evoke some sense of how joy, as opposed to fear, might be elicited by the relatively minor social tragedy of ‘missing out. ’There’s no time for FOMO, as it were, since YOLO.

As for joyful imagery, Bienvenu’s offerings are as generously genial in their spins on genre as they are generously sympathetic, generously colorful, generously scaled, and generously, decadently painted. The artist’s generosities feed into and off each other in his works, and over the years, the further he has pushed them – and the more he has allowed them to freely guide his hand and mind as a creative compass – the more resonant, materially present, physically engulfing, and visually trenchant his pictures have become. Bienvenu has always treated his subjects, even his goofiest ones, with warmth and kindness rather than smirking smugness or biting irony, and this sweetly sentimental aspect of his works is enhanced by his preference for ever more vibrant, juicier, at times audacious hues; thicker, richer applications; swathy, patchy, and unbrushy marks that are more manually communicative than gesturally expressive; and imposingly large surfaces that not only command walls and rooms, but that also force the artist to toil longer and harder to get a sufficient count of painstakingly inserted buildings into the deepest distances of a cityscape, or to imbue a convincing sense of vicarious finger-pluck into the twisty-furly obscurities of a moist bikini bottom crannied up into a wedgie.

Yes, thanks in part to Bienvenu’s enduring pursuit to harness his pictorial generosities to positively catalyze the range and mood of his imagery, even the artist’s booty paintings have become sympathetic and sweet, and for some viewers, only slightly more erotically charged than his renderings of sun-drenched, beer-bellied, cheerful brutes soaking up rays and chugging brews on the beach. Such types are emblematic of the artist’s favorite subjects, and he sees them in the same way he sees the young people camping under a constellated cosmos, the skater crashing headfirst into a concrete step, the surfer bailing wildly above the barrel of a wave, the riotous brawlers in the mosh pit at a concert, and the partiers wandering listlessly and aimlessly on a Brooklyn rooftop beneath the blazing, sun-setting cloud-play of an indelibly rendered, fathomless evening skyscape: as his friends, his neighbors, his frenemies, the strangers of his quotidian environs, the manifold others of his memories, and as the relatable, flawed characters who populate his mirthful daydreams and amusingly mundane fantasies. Bienvenu’s protagonists exude joy and elicit endearment even beyond their wacky antics and comically glimpsed circumstances. They do so also in their natural imperfections, awkward gestures, unidealized physiques, fleshy haunches, and often wonderfully large, blockish hands and feet. His figures are vessels of mixed pathos and compassion, and their surrounding elements often expand the works ’emotive range. Just try not cracking a smile at the errant dildos flying around the orgy, at the authoritative posturing of the mirror-mugging masturbator, or at the toothy grin on the big head of the polar bear rug as it gets vigorously grinded on. It’s laughing with you, after all, not at you. Several parties are implicated in the cheeky matter.

Bienvenu’s pictures are at turns nostalgic, humorous, manic, placid, tragic, salacious, excited, and static, and even when they’re charged or provocative, they steer clear of mere voyeurism and harsh judgment. These characteristics come across in the artist’s recent collages and sculptures as well, where he successfully parallels many of his trademark painterly treatments with a well elected repertoire of new materials. His torn swatches of colorful paper are clever ersatz elements for his thick, broad, unbrushy marks; and the patently manual, finger-smeary formations of his bronzes are dexterous transcriptions of his handiwork on painted surfaces. In JOMO, Bienvenu offers viewers nothing to fear, and much to indulge in. YOLO, so don’t ‘miss out’ on the joys of his solo show.