Galerie Max Hetzler presents an exhibition of new works by Toby Ziegler, at Bleibtreustraße 45 in Berlin. This is the artist’s seventh solo exhibition with the gallery. 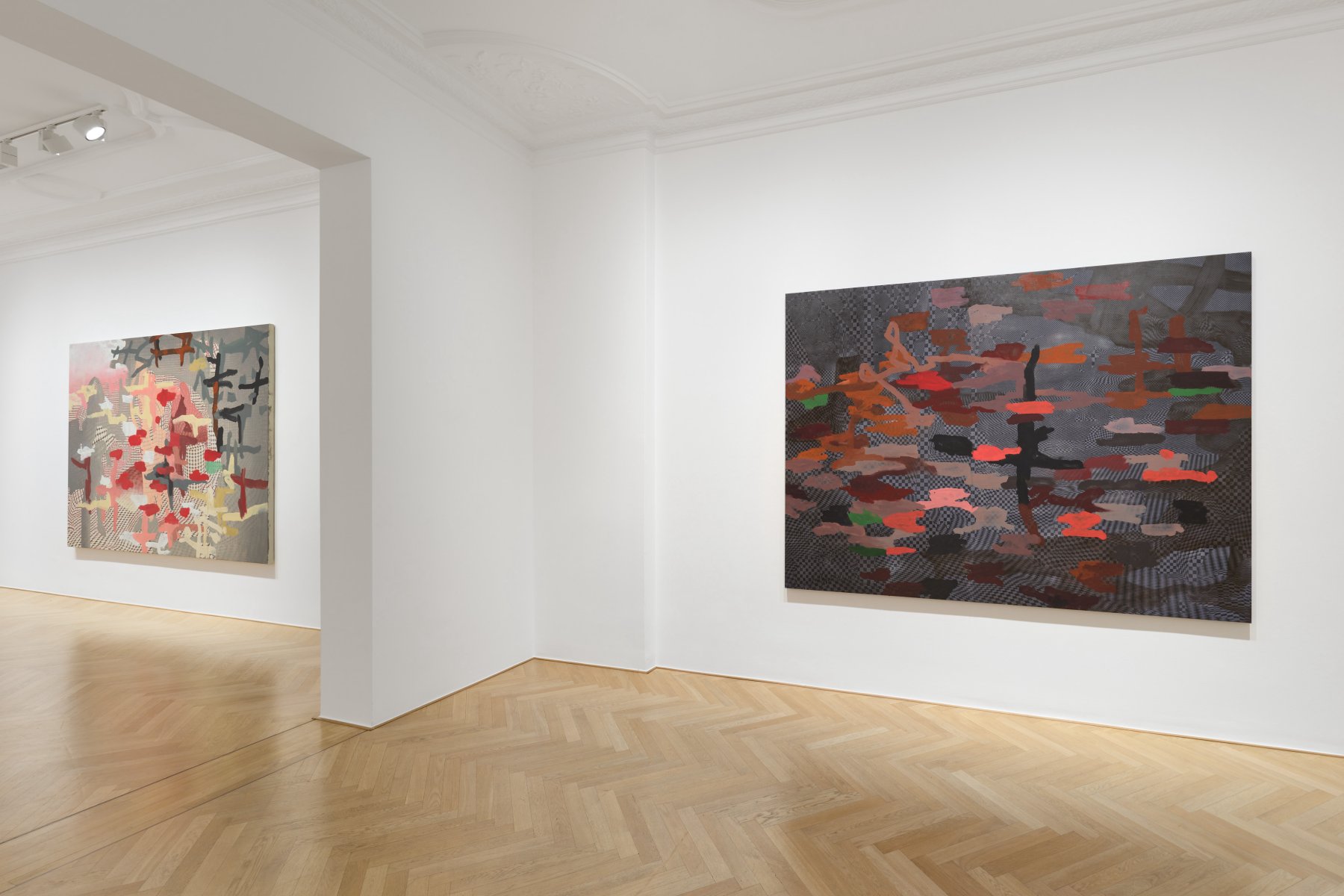 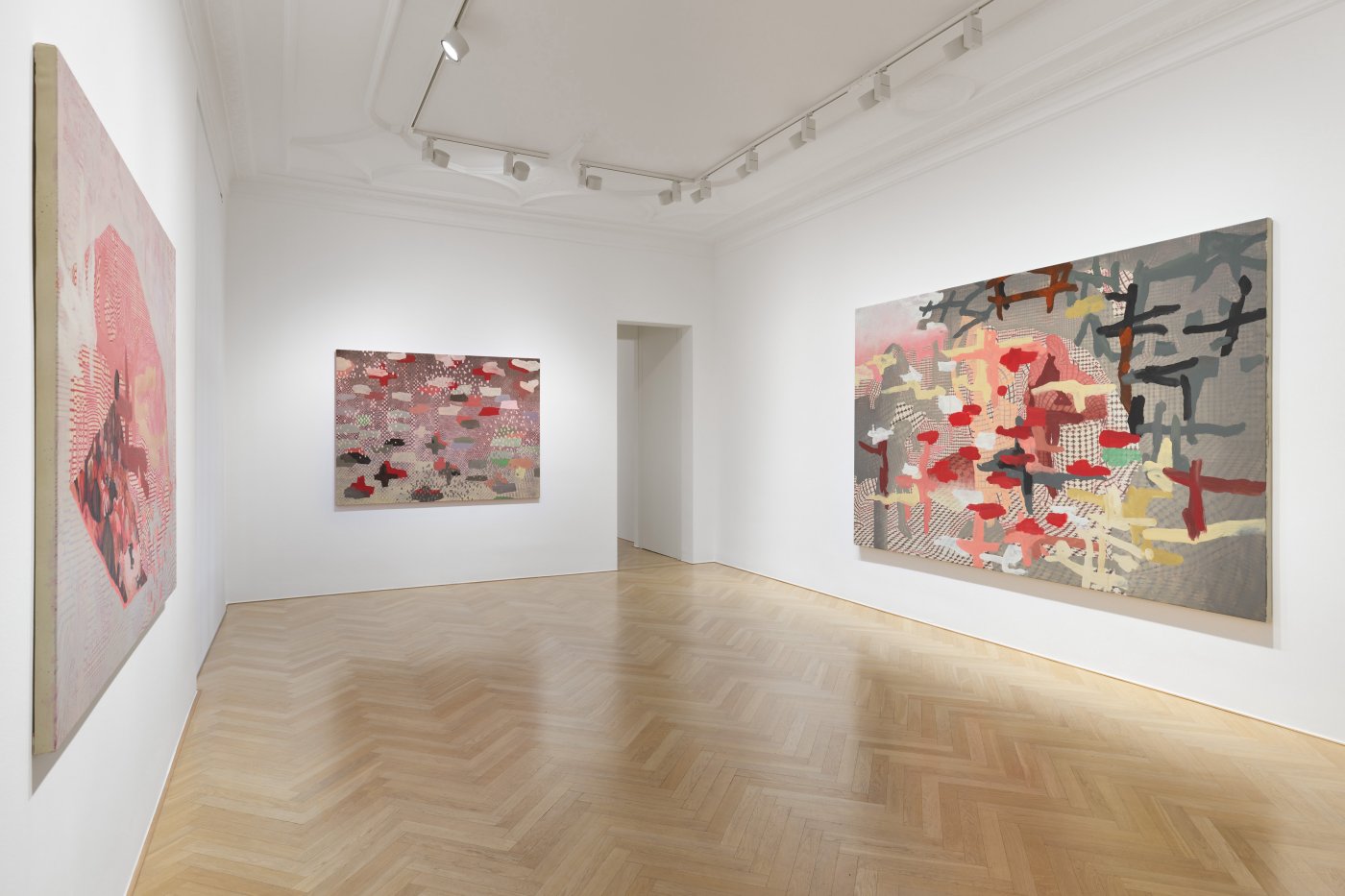 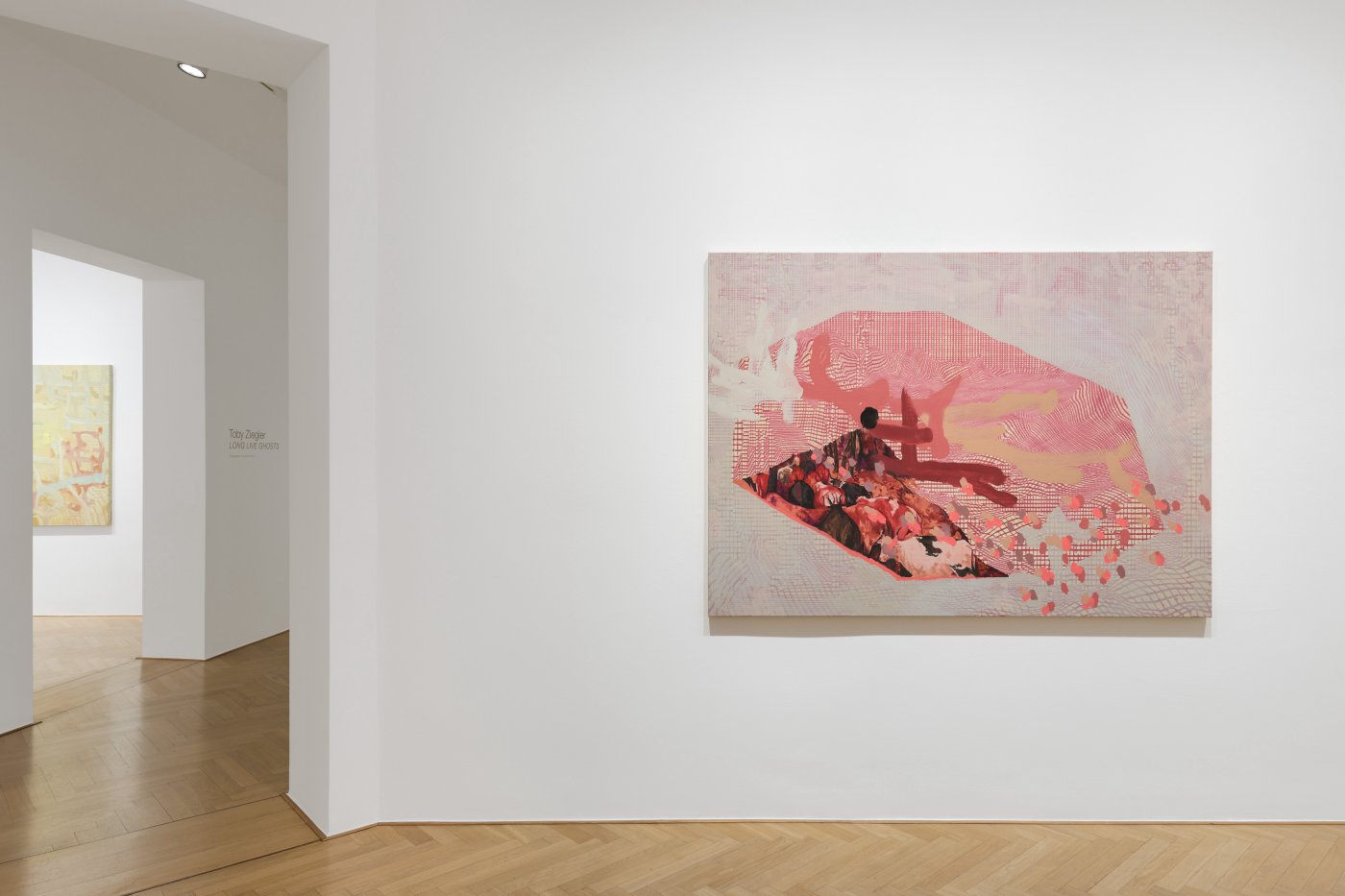 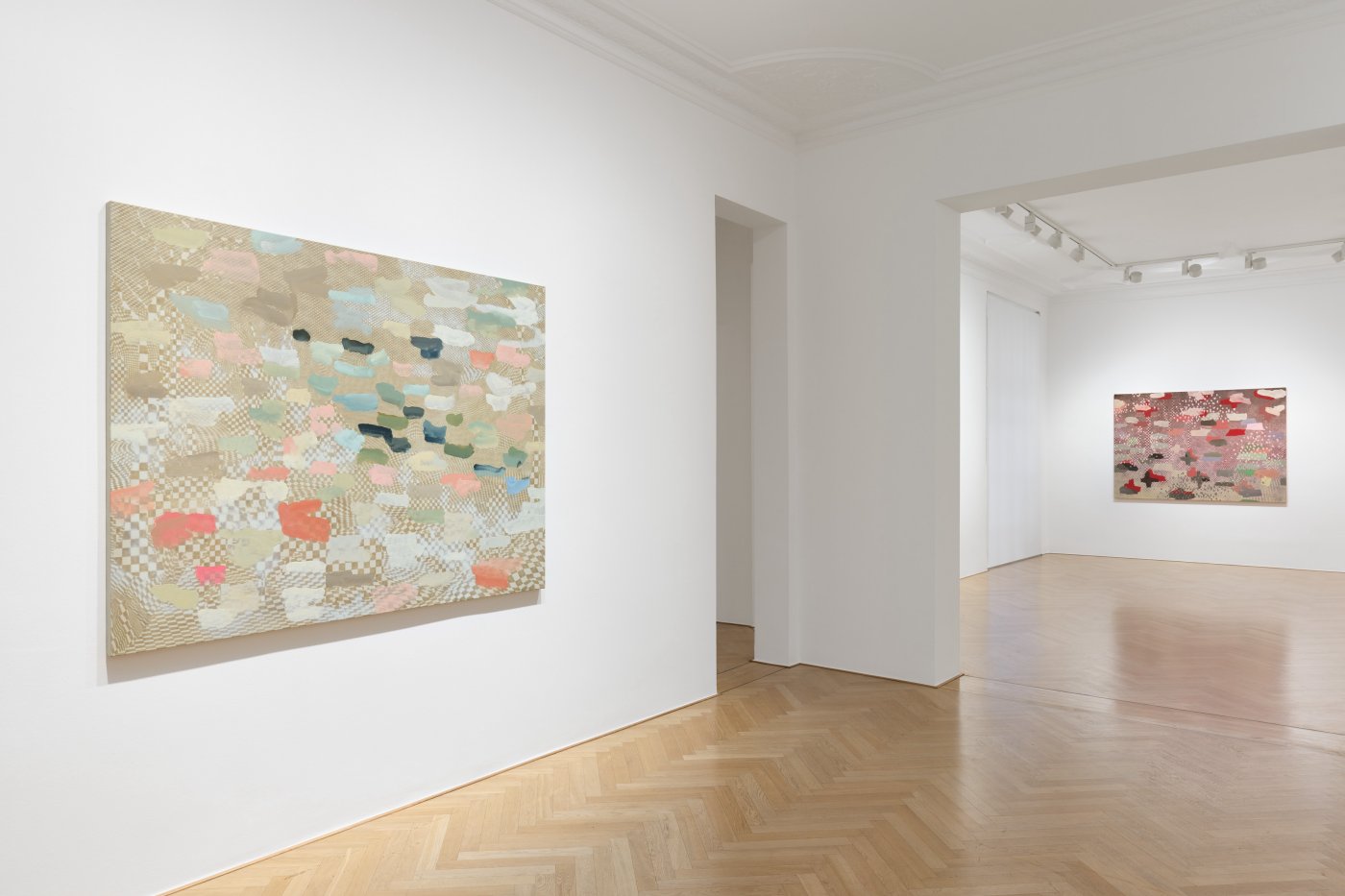 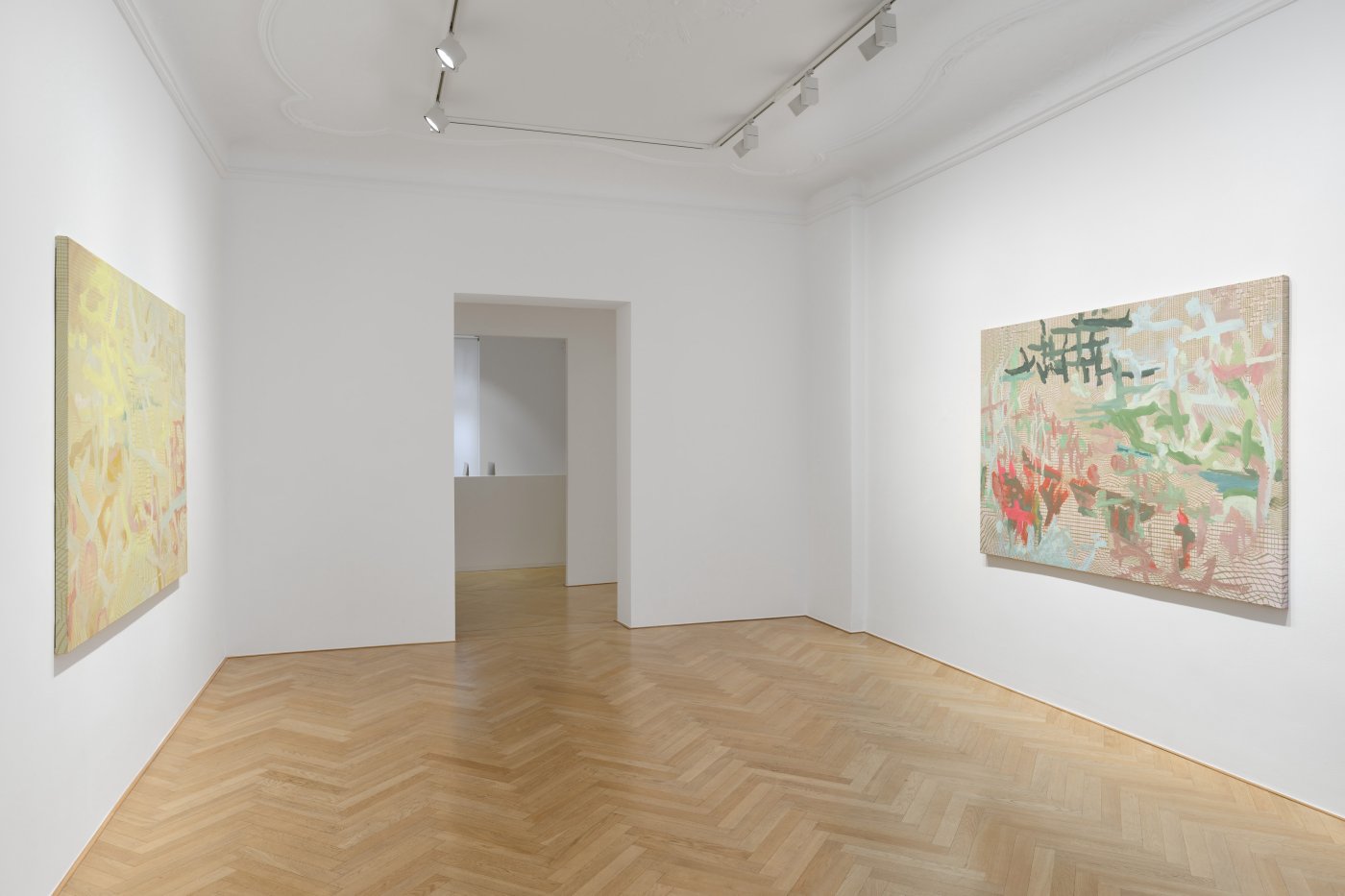 Across his practice, Toby Ziegler has long been interested in the relation between an object, its image and the space in which it exists. The circulation of images – and in particular the reproduction of artworks, as well as the loss of information that can occur during their successive transmissions and transformations – is a subject that lies at the heart of his work. His hybrid practice involves a wide range of sources reworked with digital as well as manual tools, combining fast and slow processes into single works.

Ziegler’s paintings are prompted by already existent images. The artist creates digital 3D models of objects, figures and landscapes, before rendering them within a geometric grid. He describes this as a schematic way of envisaging a form, which provides the base for something more intuitive. Ziegler has been working on this current series of works for some time, experimenting with new techniques as well as pictorial elements. The digital blueprints underlying his earlier works have all but disappeared from view. Following his experimentation over the course of the past few years, he discovered a new way of integrating this pictorial language with something more painterly and spontaneous. It is a process of discovery not dissimilar to an improvised musical performance, following a familiar and well rehearsed melody.

The works in the current exhibition are the result of a preparatory process of computer imaging, followed by gestural mark making. For this body of paintings, Ziegler has combined two visual languages which become indistinguishable in their polyphony. The computerised landscape forms an essential starting point, which all but disappears from view. The titles of works like Expansion Vessel, 2021 or Hard Water, 2021 evoke associations of movement and fluidity, as if the gestural, painted strokes are moving simultaneously into the same directions, on the backgrounds of their computerised bases. The more organic shapes in other works are more reminiscent of plants or forests. The underlying colours or grids structure the free strokes and hold the paintings together visually. The work-titles are not meant to pin down meaning in the work , but they all relate to memory, artifice, and the idea of remembering as a creative act. Paintings can be vessels full of ghosts: personal and collective phantoms, as well as those of the viewer; all the ghosts that creep in from the internet; the ghosts of paintings that came before, medieval, modernist and ones the artist has previously made.

Toby Ziegler (*1972, London) lives and works in London. Ziegler’s work has been the subject of solo exhibitions at international institutions such as the Stiftung für Zeitgenössische Kunst, Weidingen (2022); the Museum of Old and New Art, Hobart (2018); The Freud Museum, London (2017); The Hepworth Wakefield (2014); Zabludowicz Collection, London (2010, travelled to The New Art Gallery Walsall; and Kiasma Museum of Contemporary Art, Helsinki); Yorkshire Sculpture Park, Wakefield (2007); and Chisenhale Gallery, London (2005), among others.