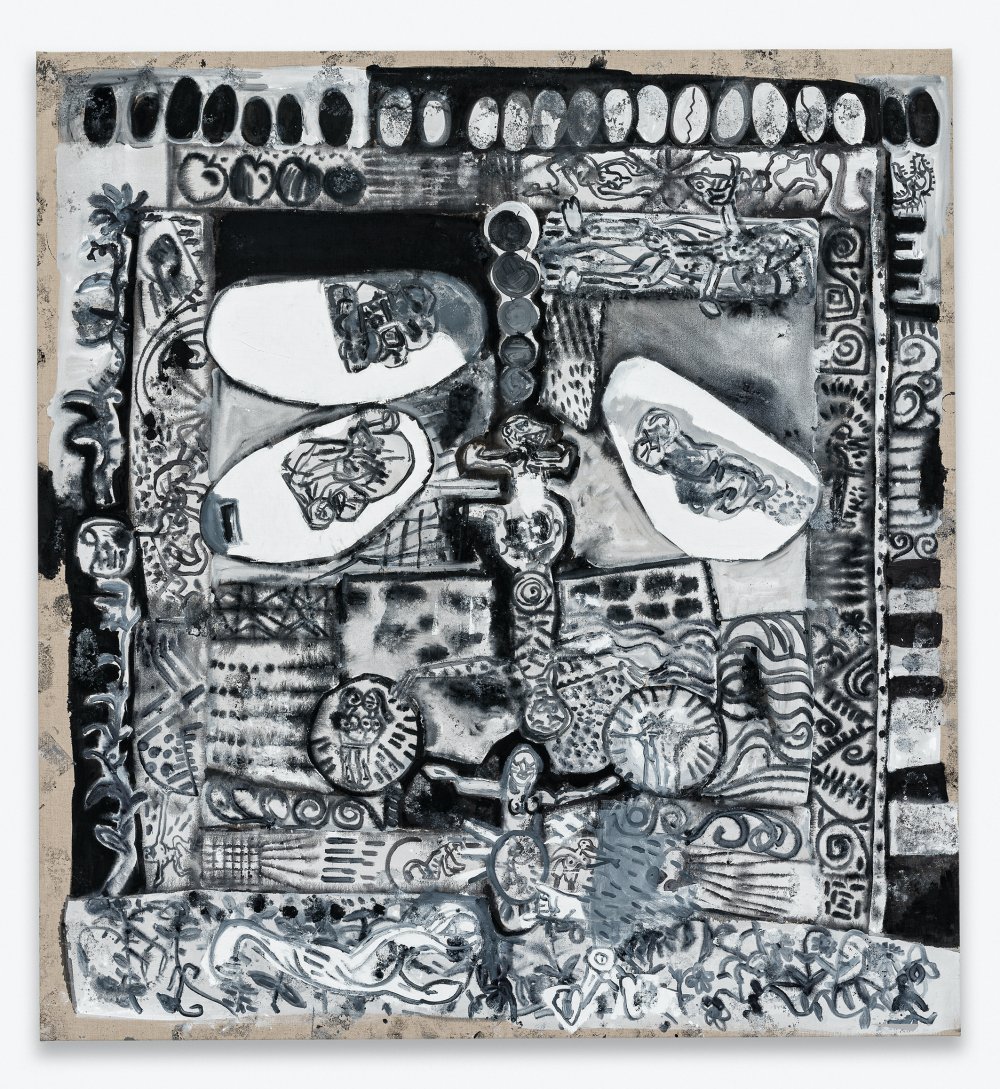 Tobias Pils
Jesus is a Woman (lovers breaking the egg), 2018 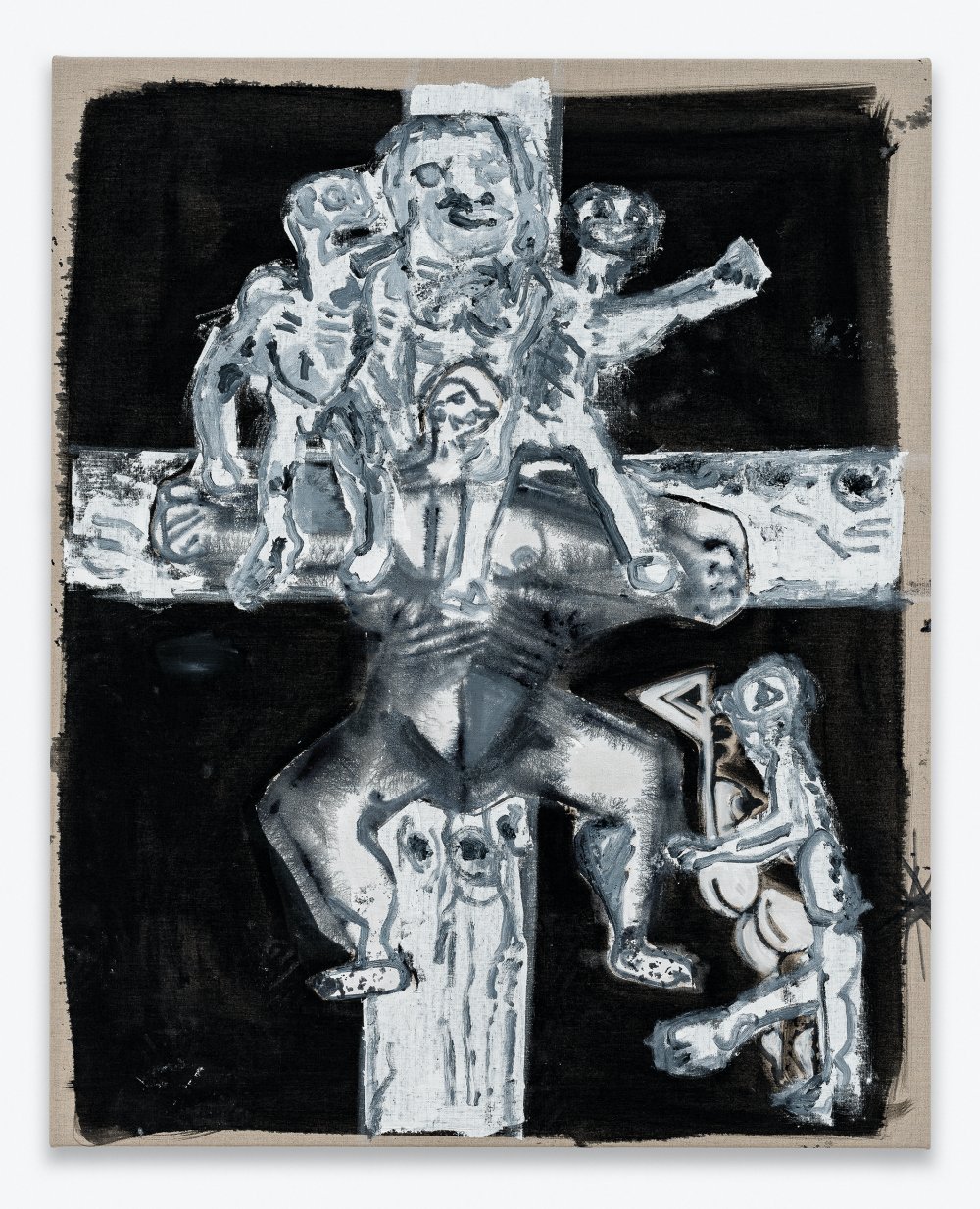 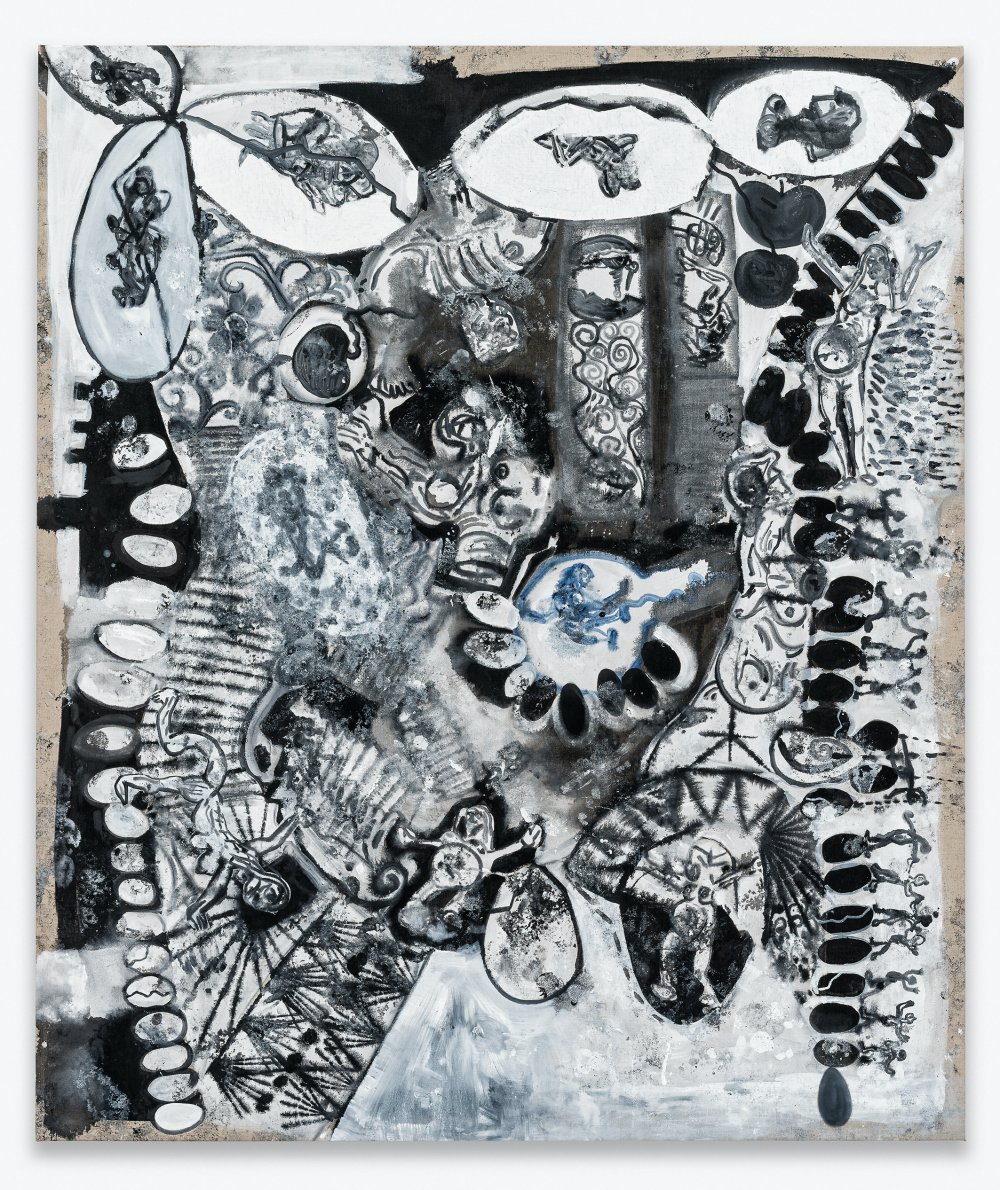 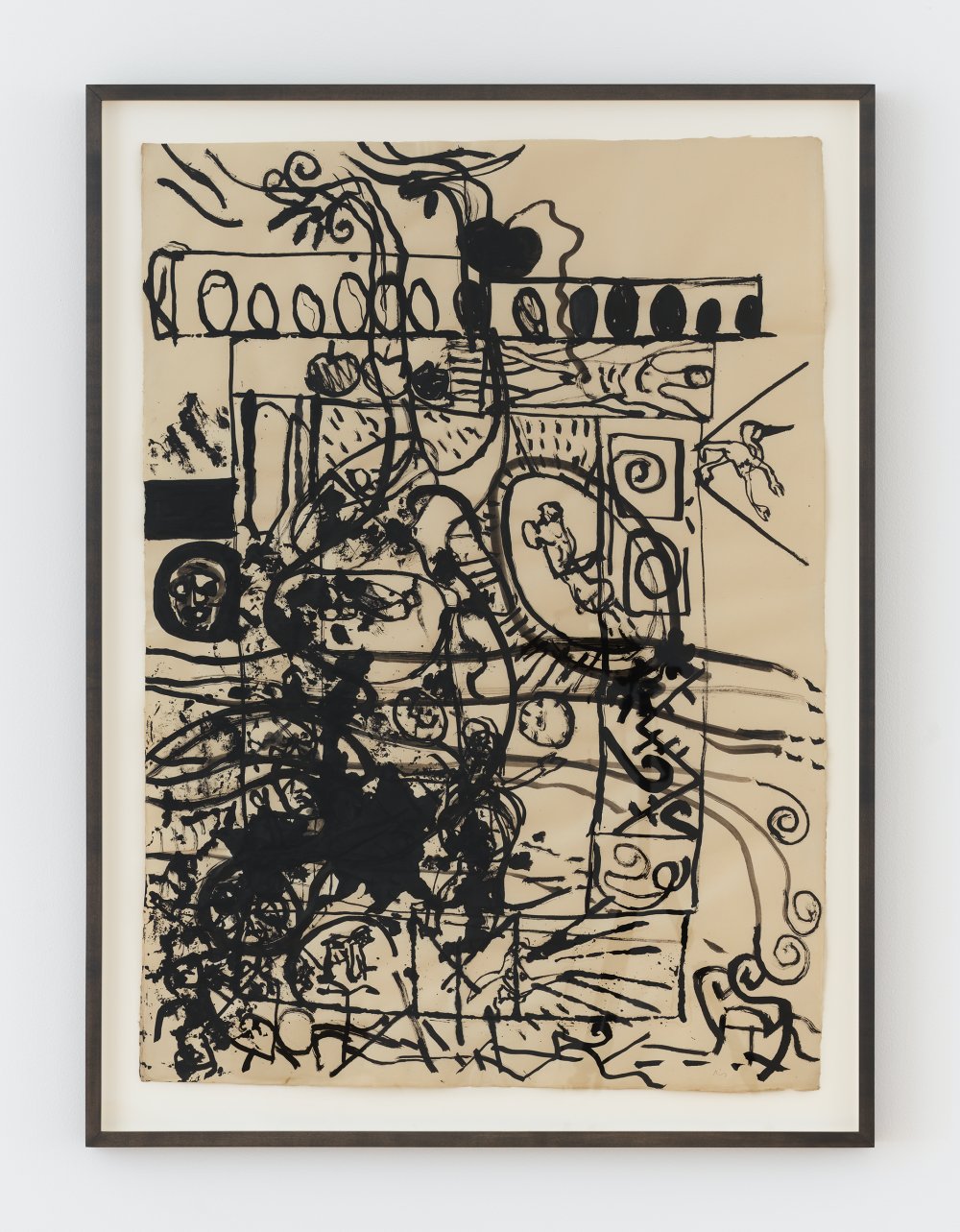 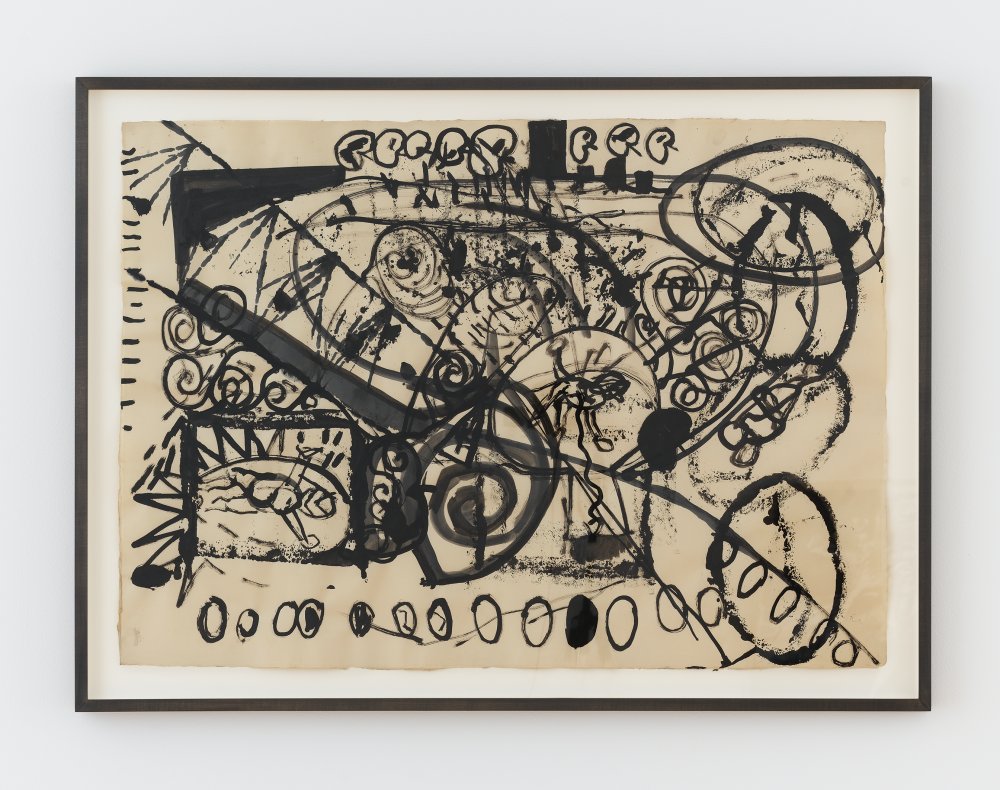 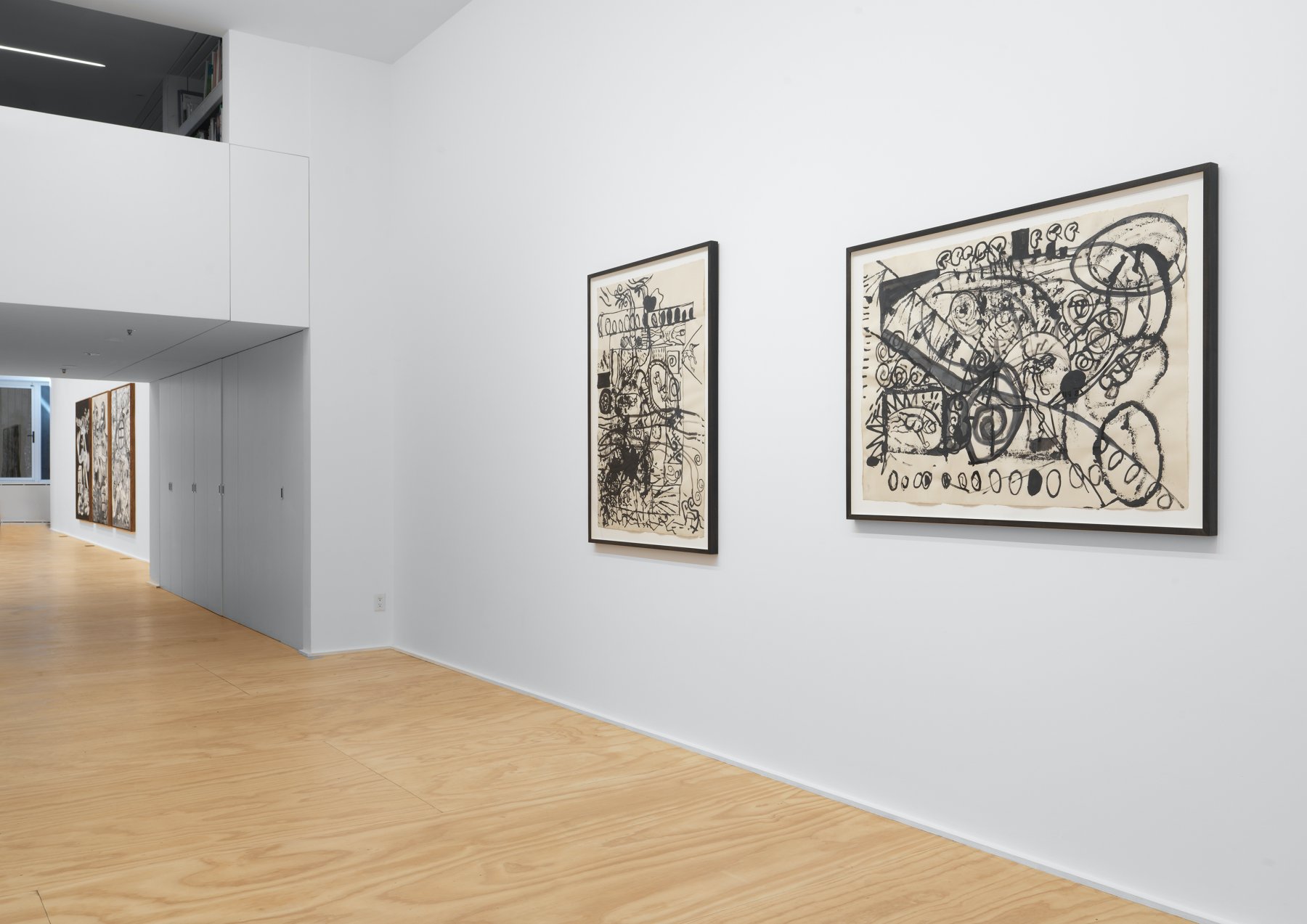 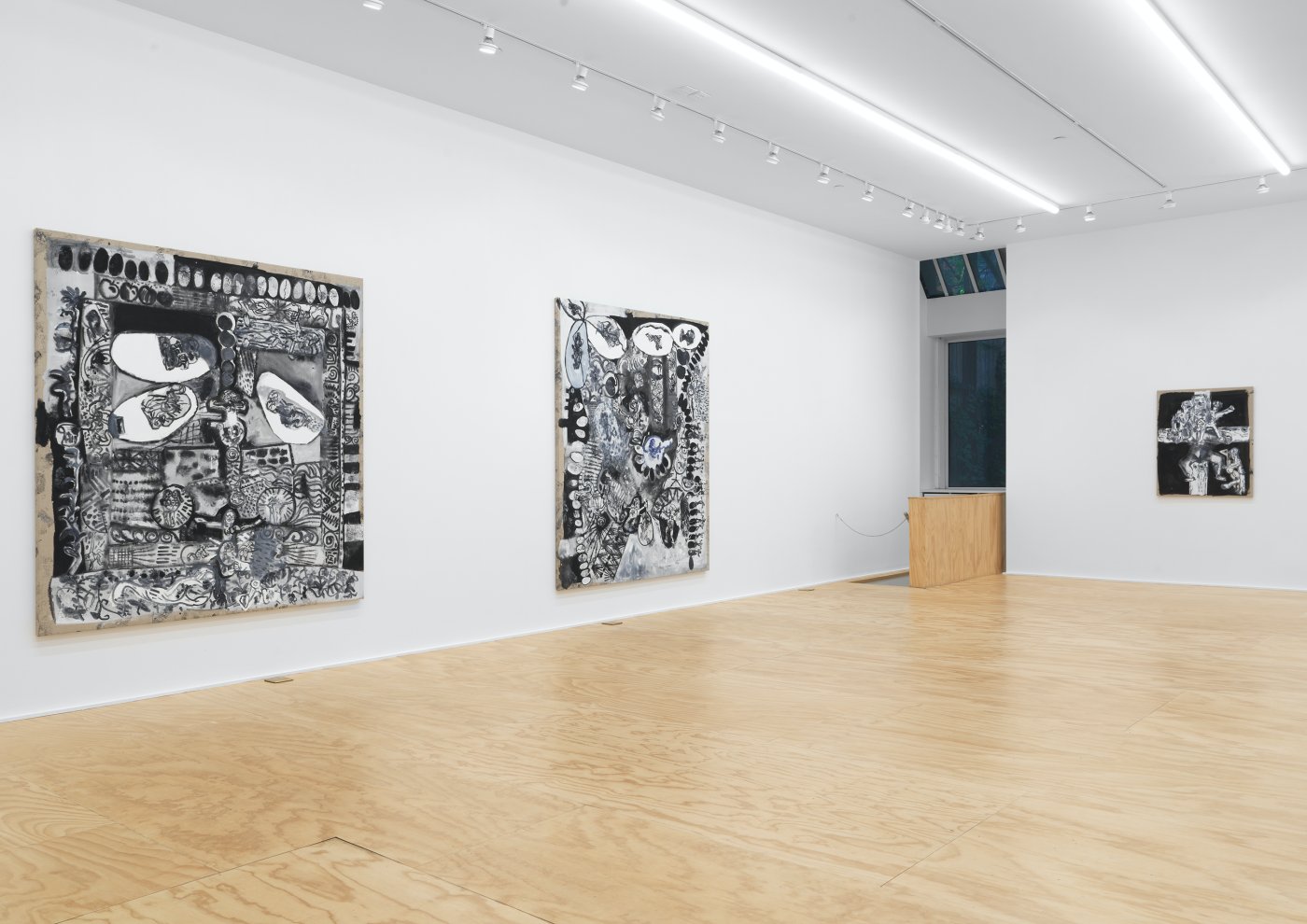 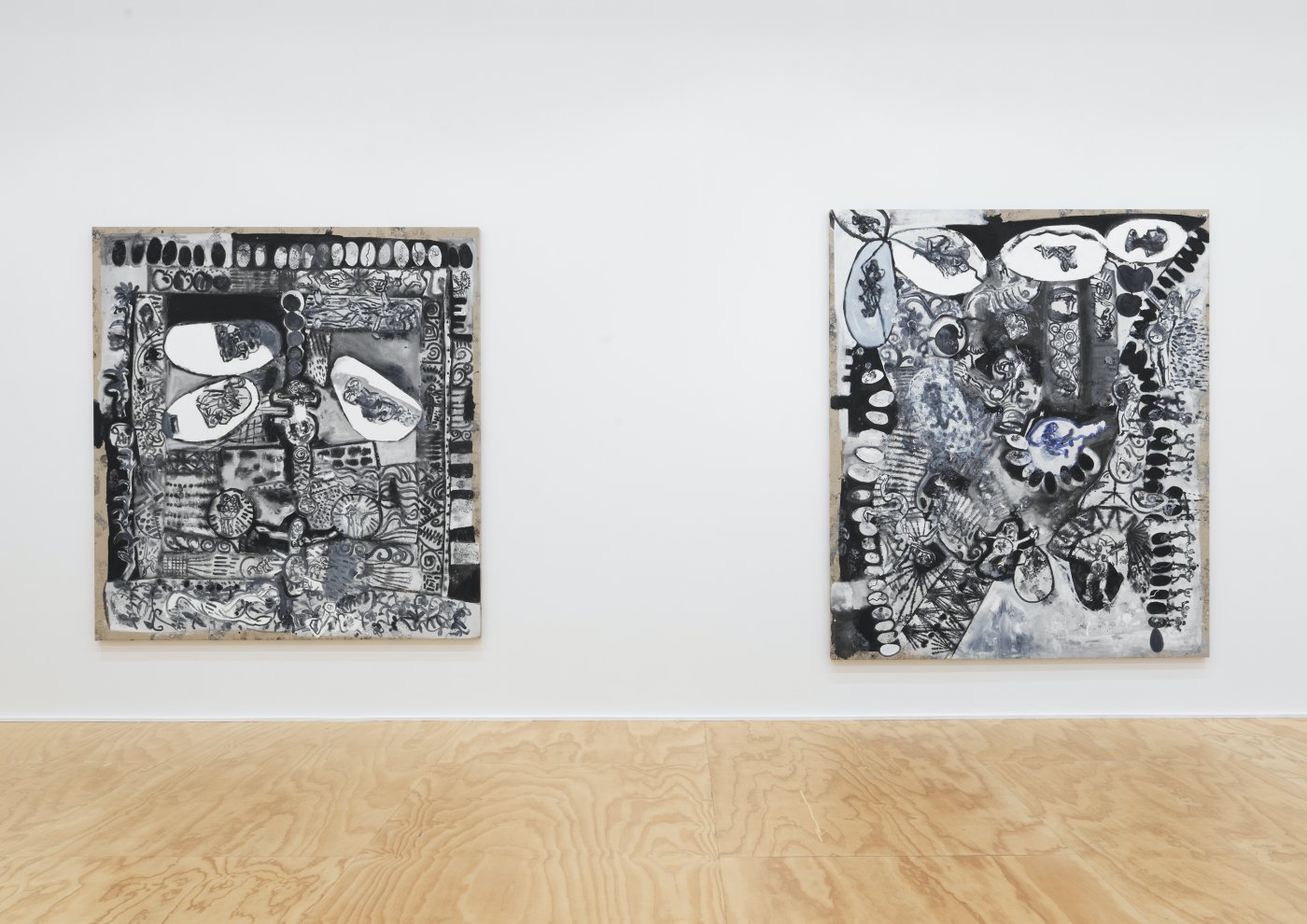 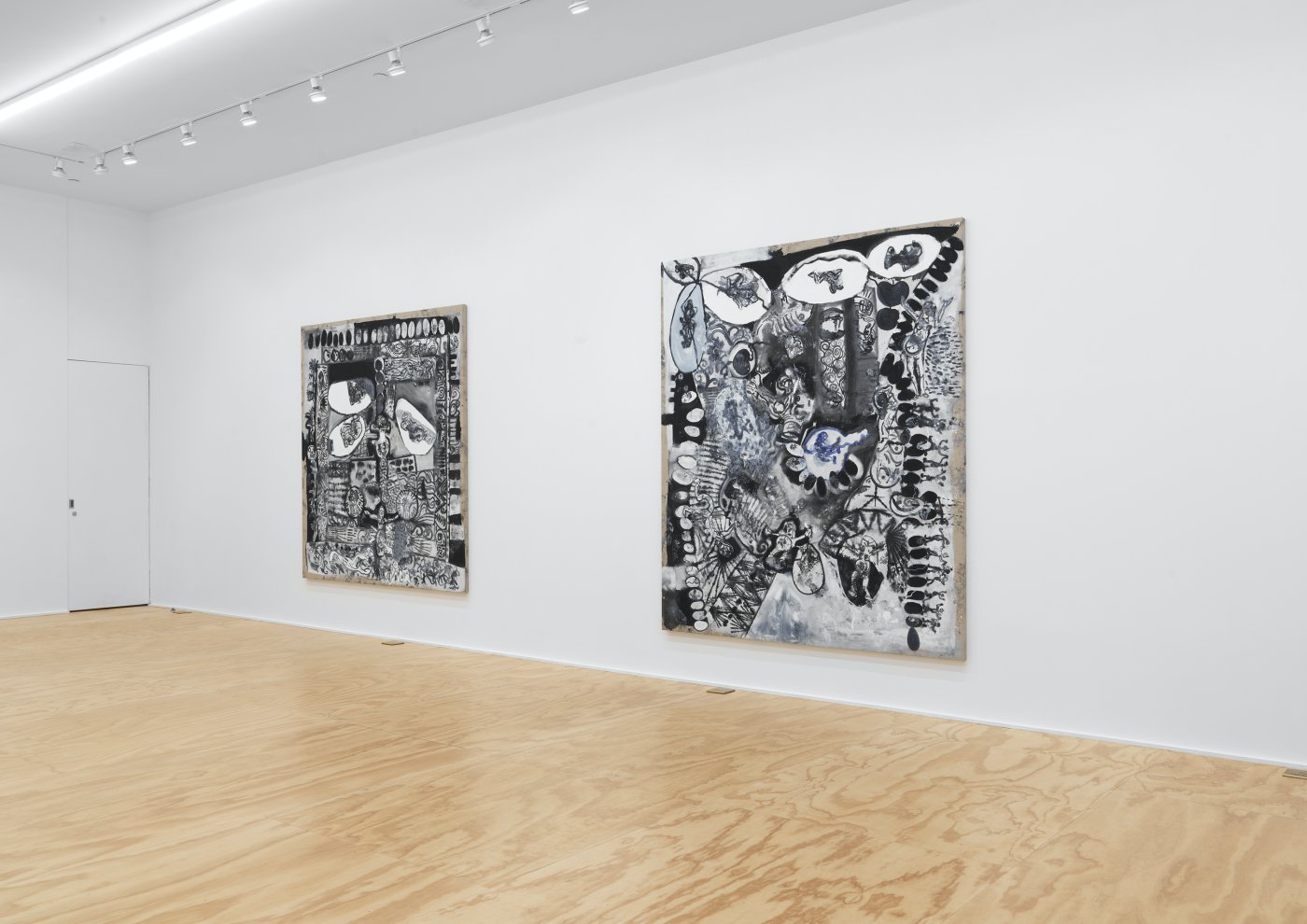 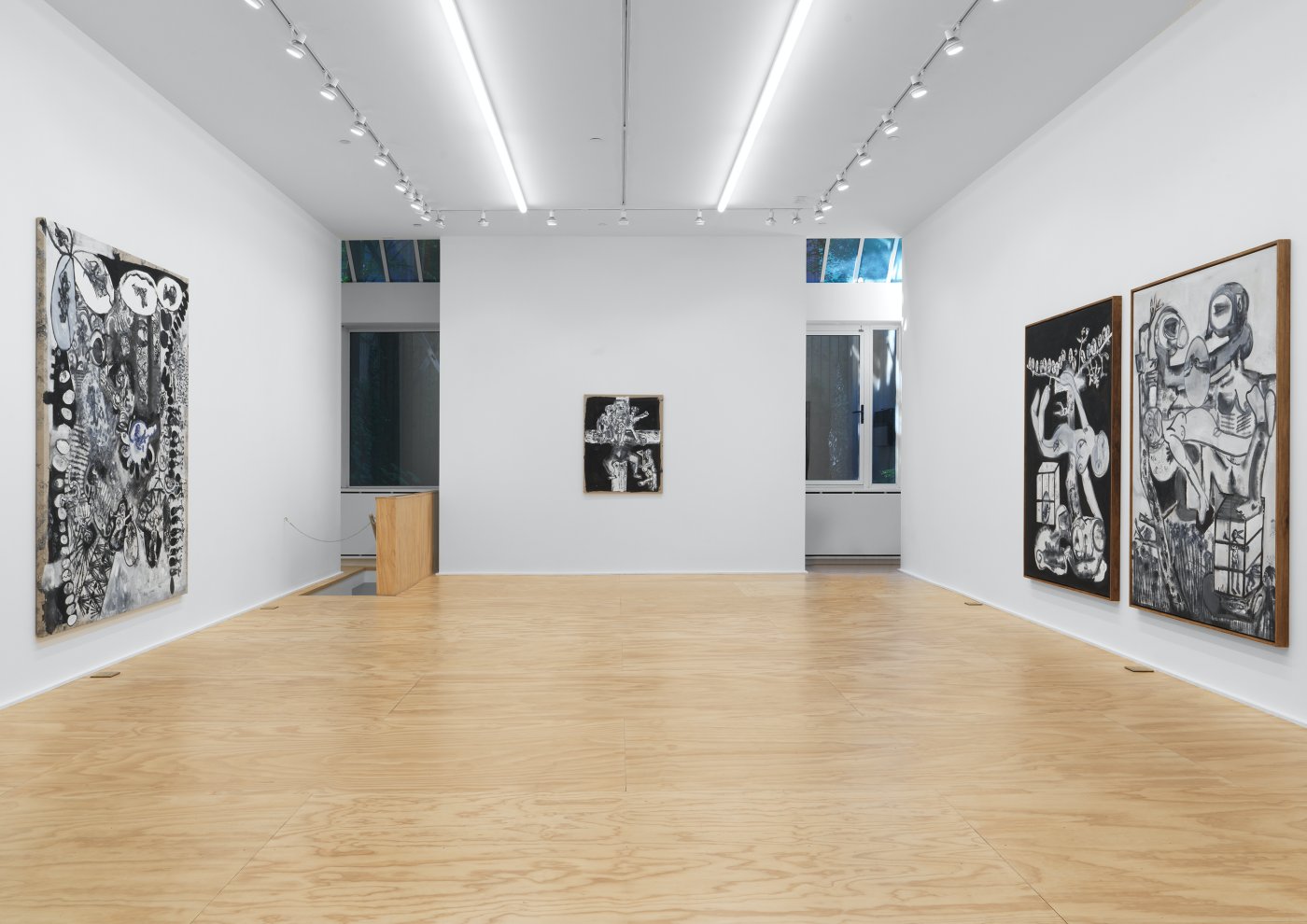 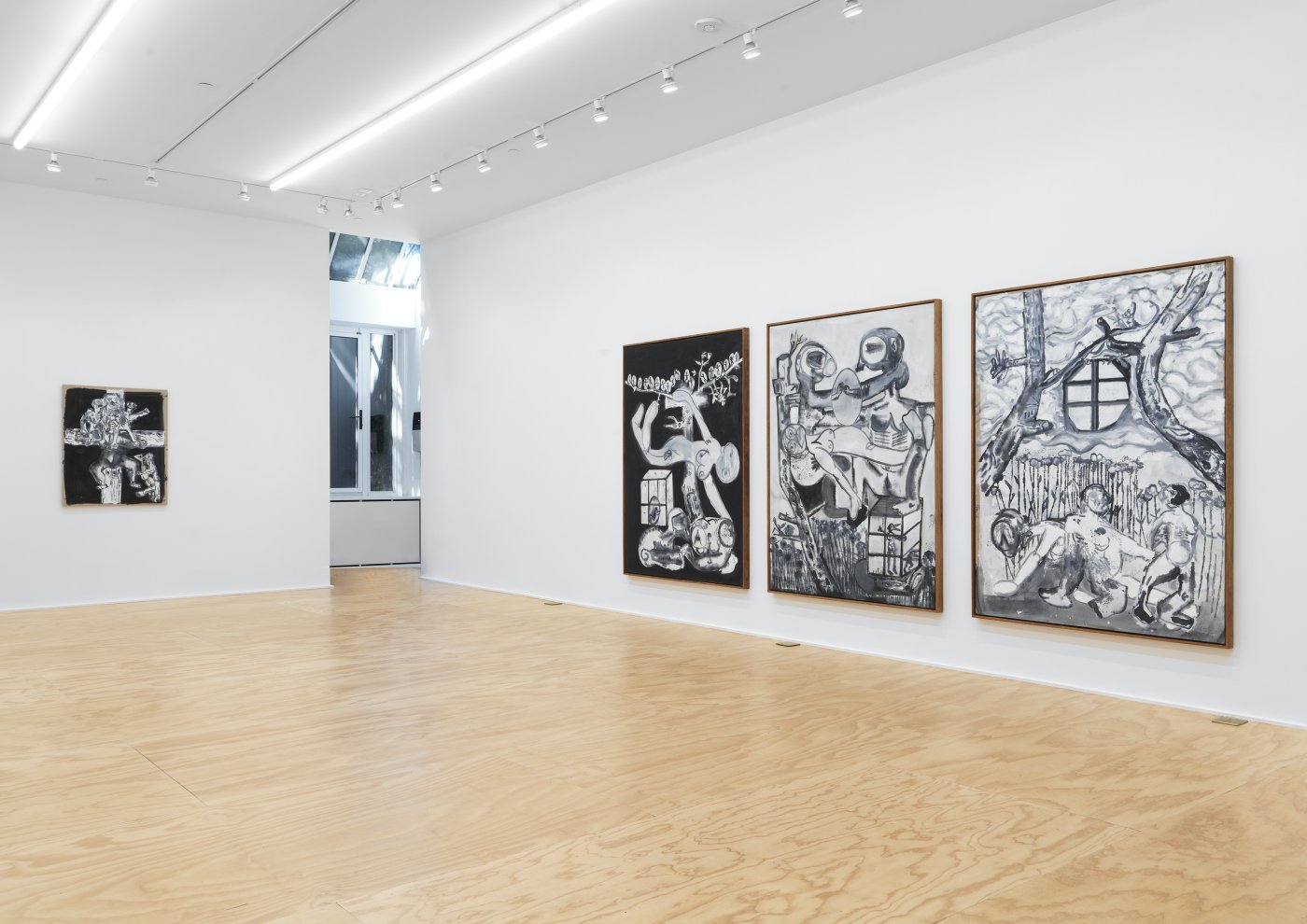 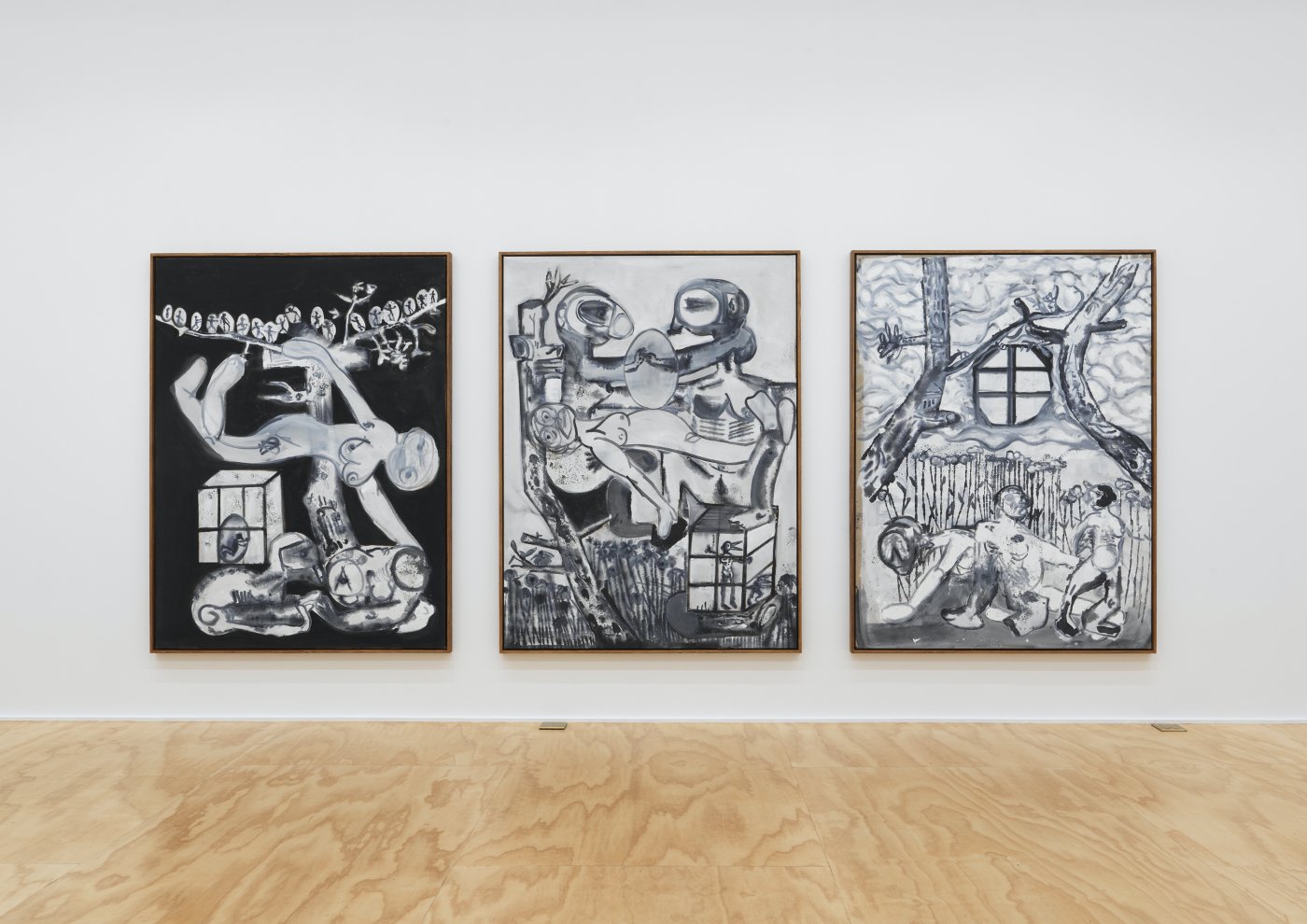 Pils’ painting process is characterized by planning, which then negates itself throughout its execution. In the process, representation shifts to abstraction, figuration becomes composition. Richard Shiff encapsulated this in one sentence: “Your imagery is more like that of an abstract artist who uses representation as the elements of abstraction.”

Pils’ work creates an unease of interpretation and challenges the notion of subjectivity in painting. His method is intuitive, created in the context of the painter’s everyday life. Yet, he never fulfills his plan; instead, he veers in different directions while painting. In doing so, Pils produces manifold forms within one canvas. Nevertheless, his practice is always accompanied by technical precision and pictorial thought. Pils creates works whose appeal lies in the ambivalence of interpretive uncanniness, discontinuity, and technical mastery.

The exhibition is built around Triptych Nr 1. The work consists of three large-format paintings, which define three different spaces or temperatures, through their backgrounds spanning from almost black to almost white. Recurring motifs from Pils’ oeuvre come together to form a composition that implies a certain symbolism as well as a narration, though neither are ascertained. The overall composition, like the cross in the left painting, also occurs in other drawings and paintings. Rather than representing a utilization of an iconographic visual language, however, it visually and formally locates the painter in Austria, where crosses are omnipresent, especially in triptychs. This comes into sharp relief in the painting Untitled (Crucifixion), which alludes, through its title and composition, to the crucifixion of Christ, while the painting as a whole cannot be interpreted as such.

Equally, the recurring motifs of the apple, the egg, and the hybrid beings that combine characteristics of humans and birds, cannot properly be understood as allusions to mythical or religious motifs. However, these elements coalesce into intimations of transition and renewal, which are crucial to the exhibition. With each painting, Pils delves ever more deeply into this idea, which he calls the cell nucleus of his paintings. Even so, the language he develops within this process remains visual, incapable of being translated into words. Titles like Untitled (Crucifixion) should not be understood as translations of an underlying idea, but rather as a kind of visual etymology that emerges from the creative process.

In the two paintings, Blue Woman (lovers breaking the egg) and Jesus is a Woman (lovers breaking the egg), the microstructure of Pils’ language comes to light. Abstract forms, lines, and shapes alternate with motifs. Wet-on-wet painting makes shapes and forms appear blurry, while the same forms seem sharply focused in other areas. In the usual sense of the word, Pils’ language does not make sense. Nonetheless, on a visual level, it is possible to identify sensual congruities between the elements, which lead to a wholeness in composition. In the triptych, a birdcage appears on the left and in the middle, while the shape of the cage’s bars can be seen in the painting on the right. In this instance, however, it is more reminiscent of a window, while it remains unclear whether the defined space is inside or outside of it.

Both ink-on-paper drawings correspond to a painting and are reformulations created in a focused meditation after the paintings were finished. The paper that Pils uses for these exercises—or meditations—is more than a hundred years old, exuding its own atmosphere and contributing to the uniqueness of this approach. As if telling a story from memory, the overall impression of the original painting remains recognizable, while parts change, get lost, fade into the background, or assert themselves more fully in the reformulated work. Nevertheless, Pils’ language remains untranslatable, denying the viewer any chance at interpretation. The complexity and mystery of its grammar and lexicon, however, shine through in every image.