Monika Sprüth and Philomene Magers present a show of new work by Thomas Scheibitz titled Black Swan, his first solo exhibition at the London gallery since his extensive two-part presentation in 2010, A moving Plan B – Chapter ONE and Chapter TWO at the Drawing Room, London and the gallery respectively. 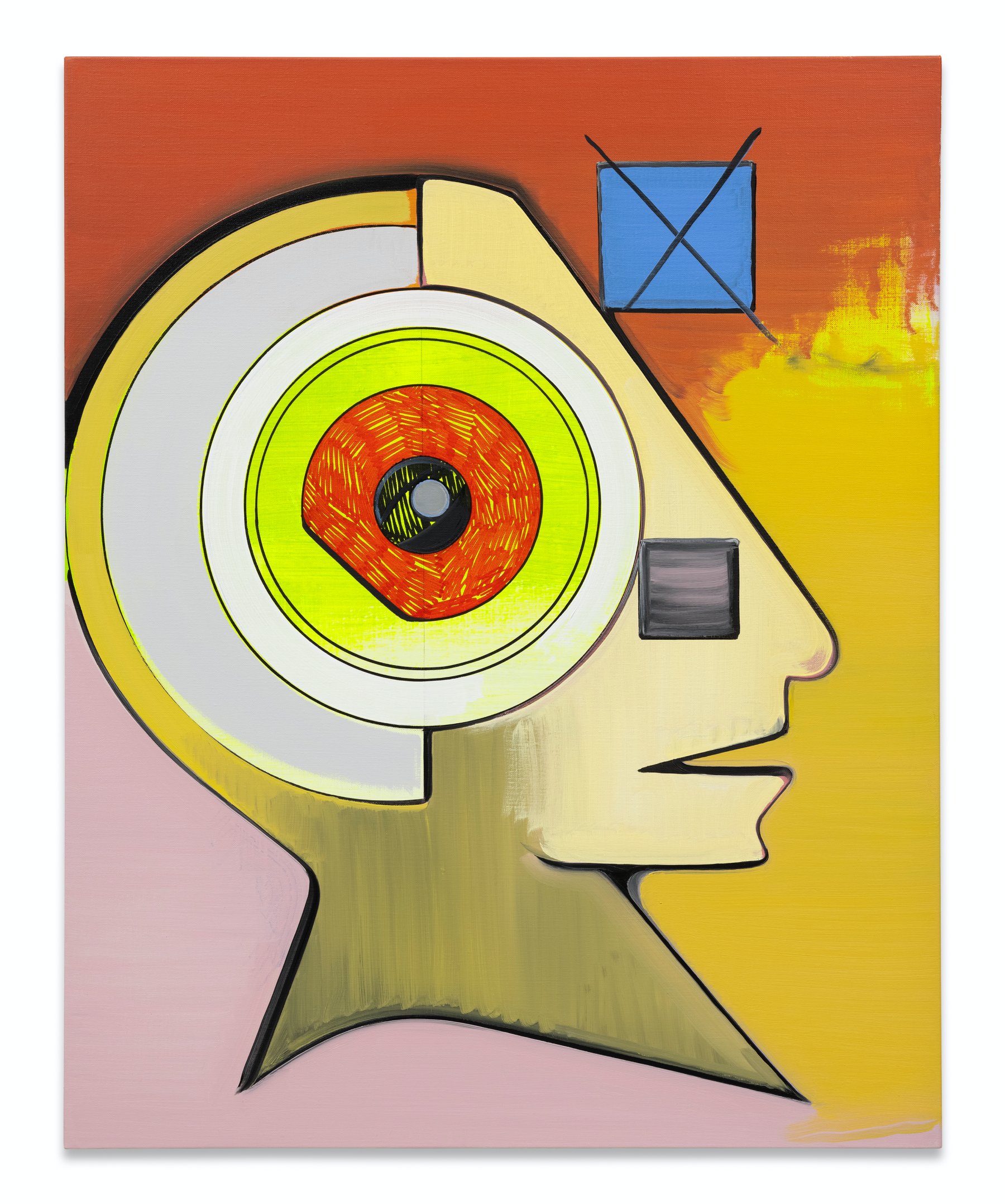 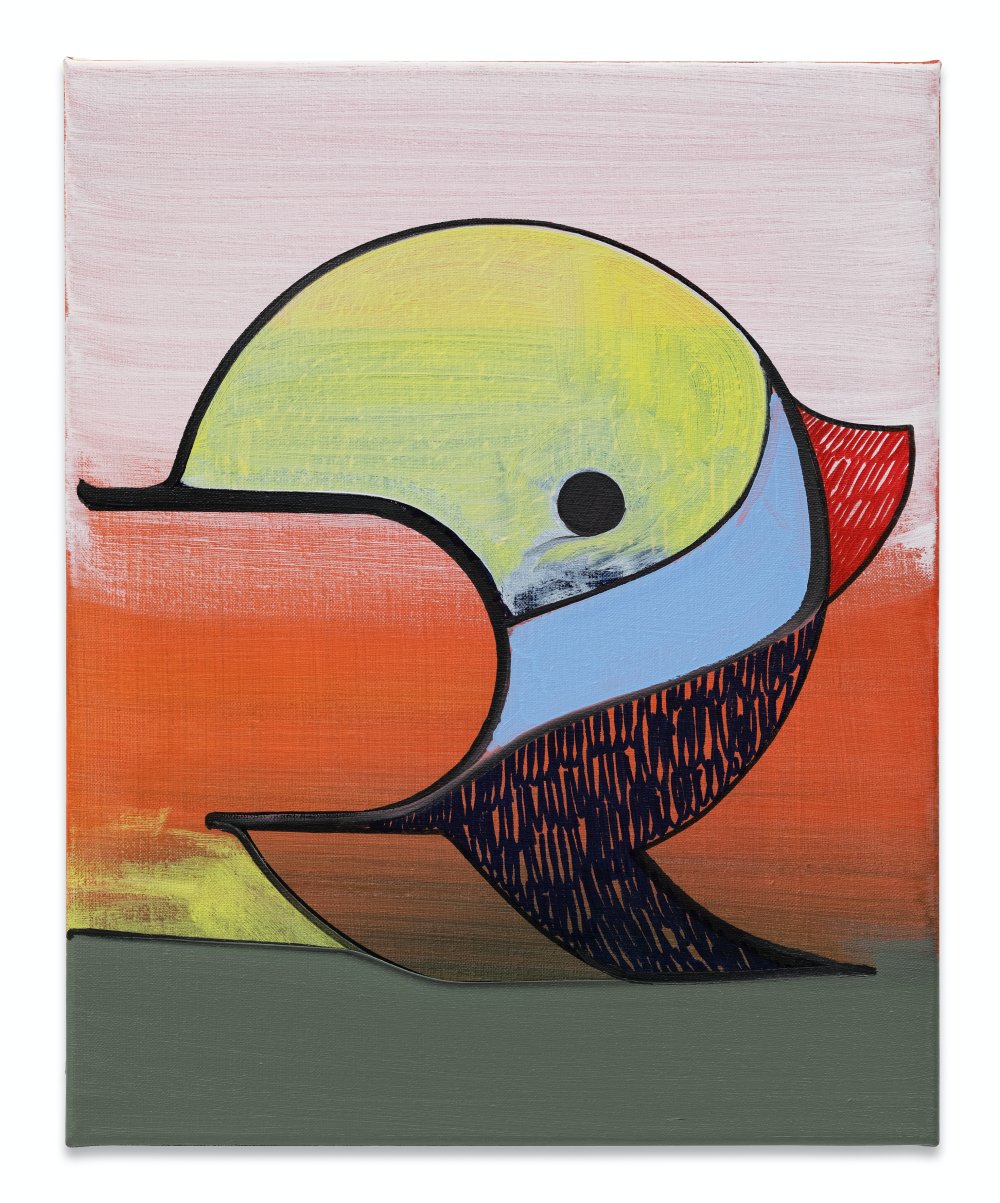 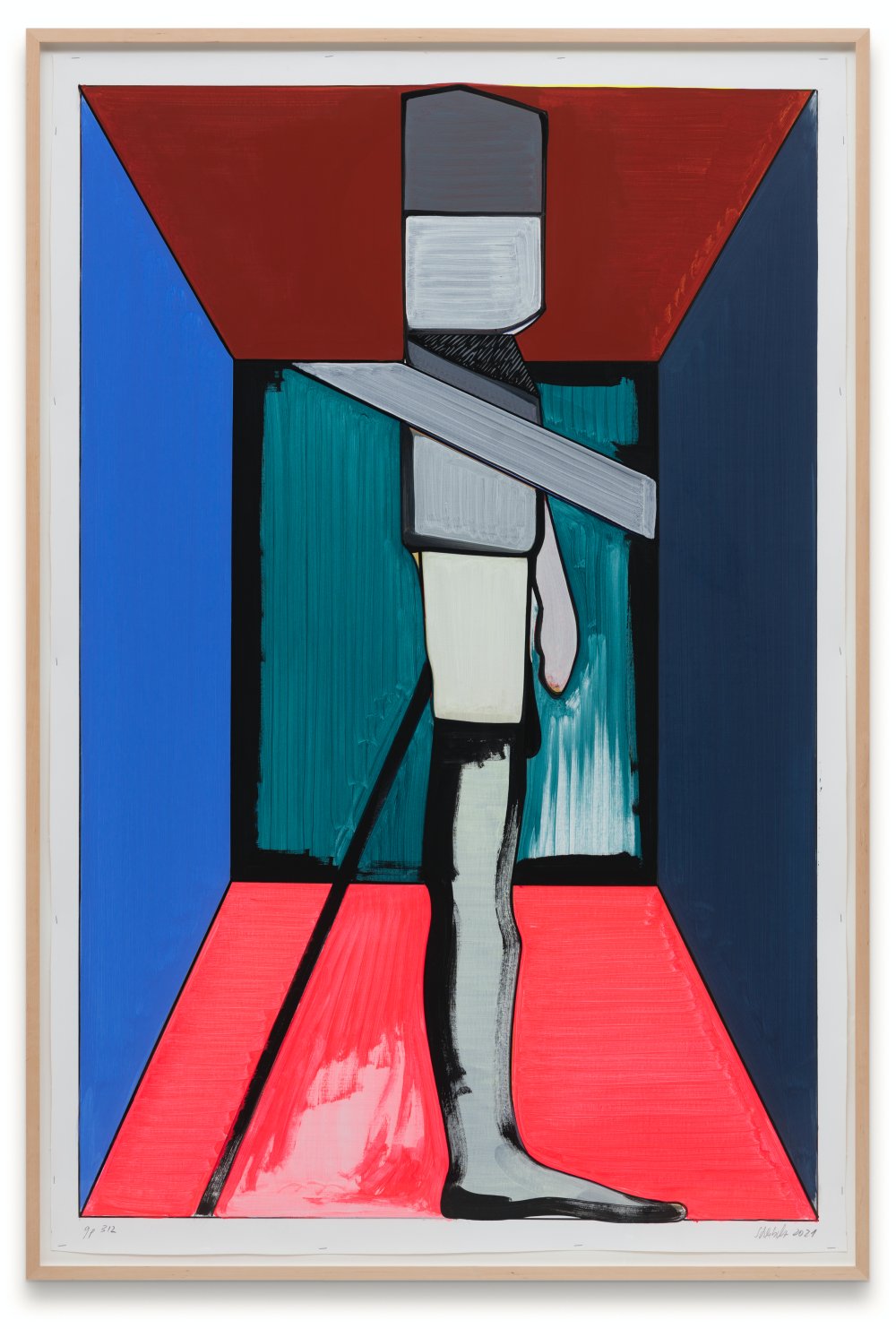 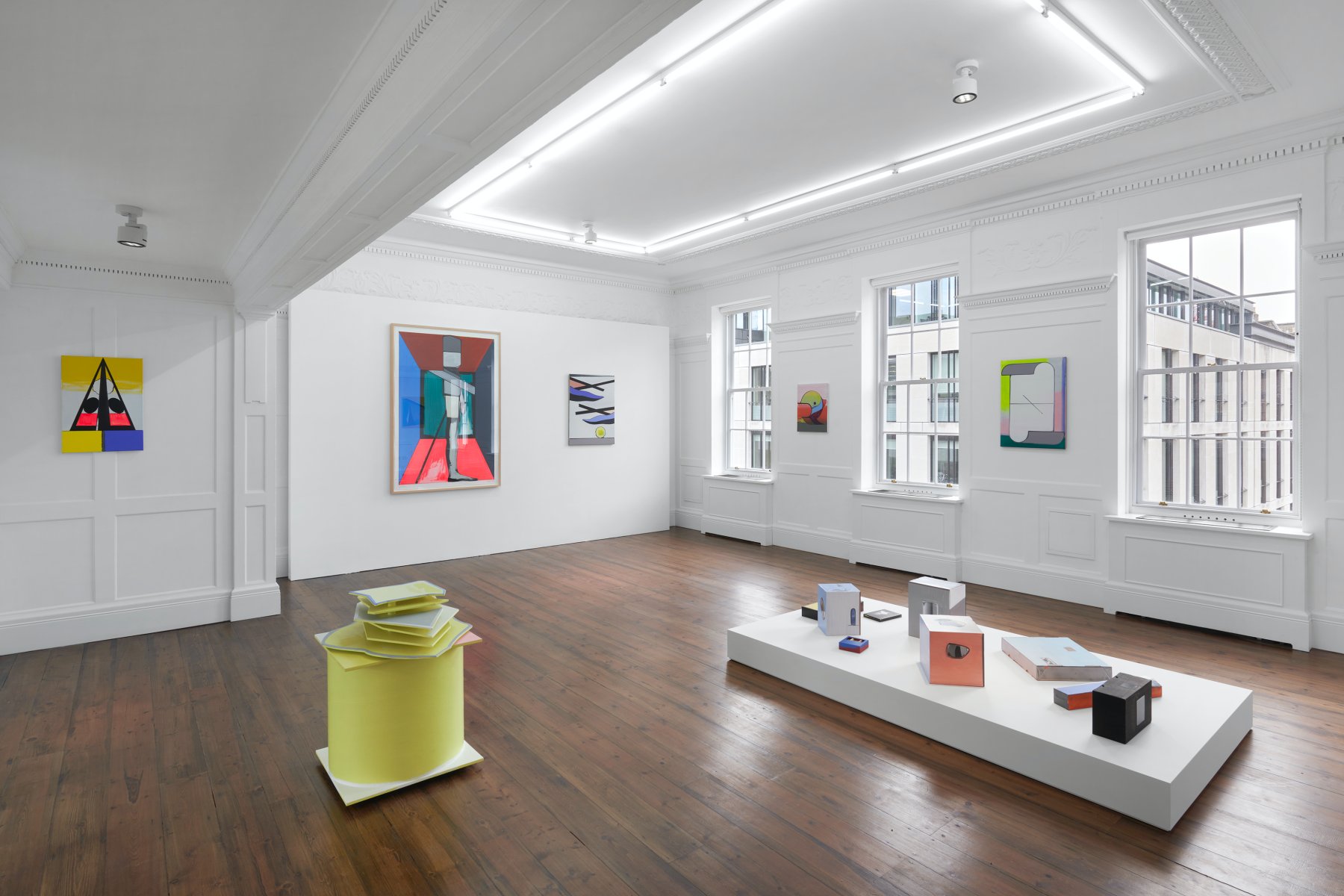 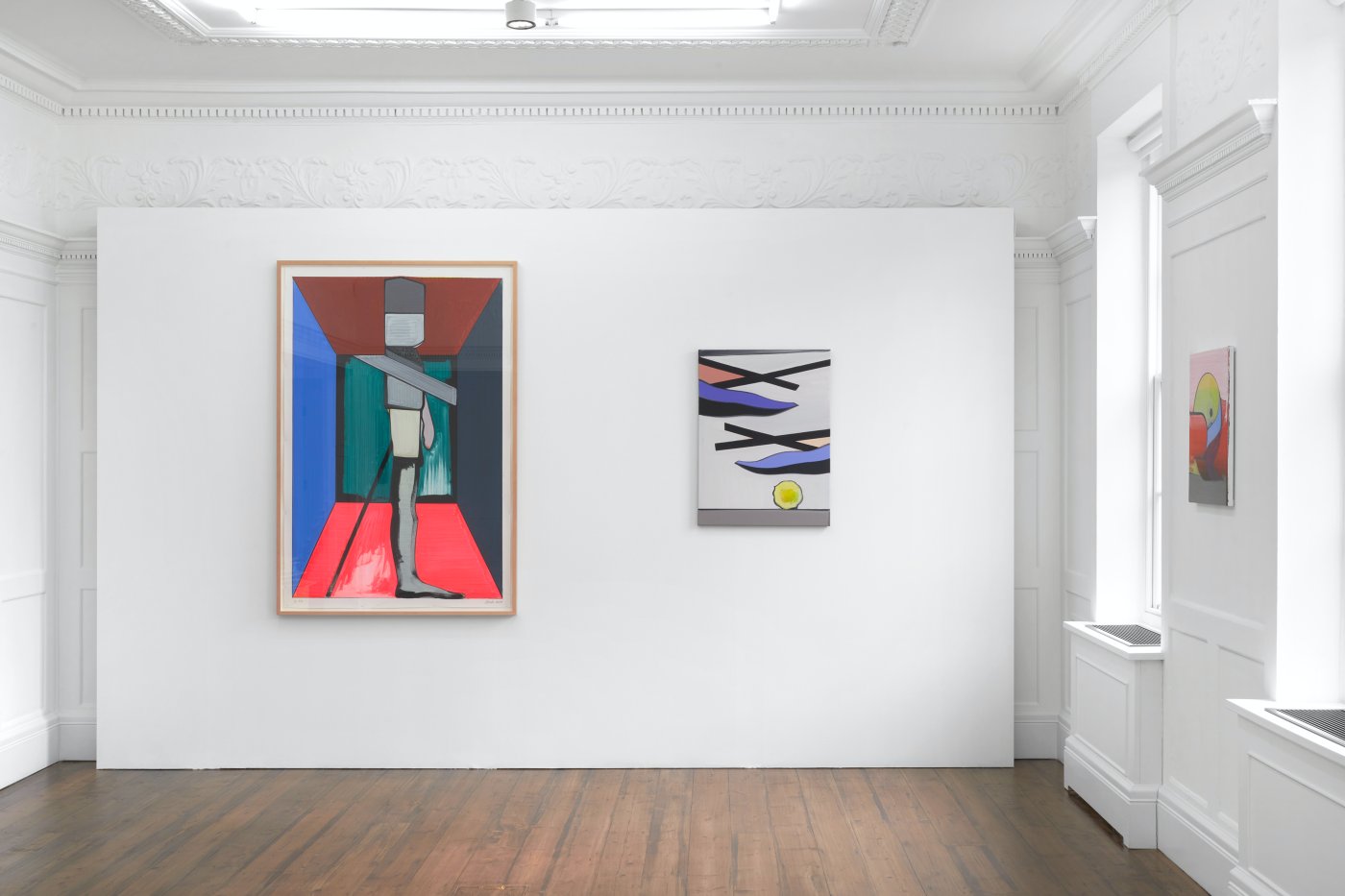 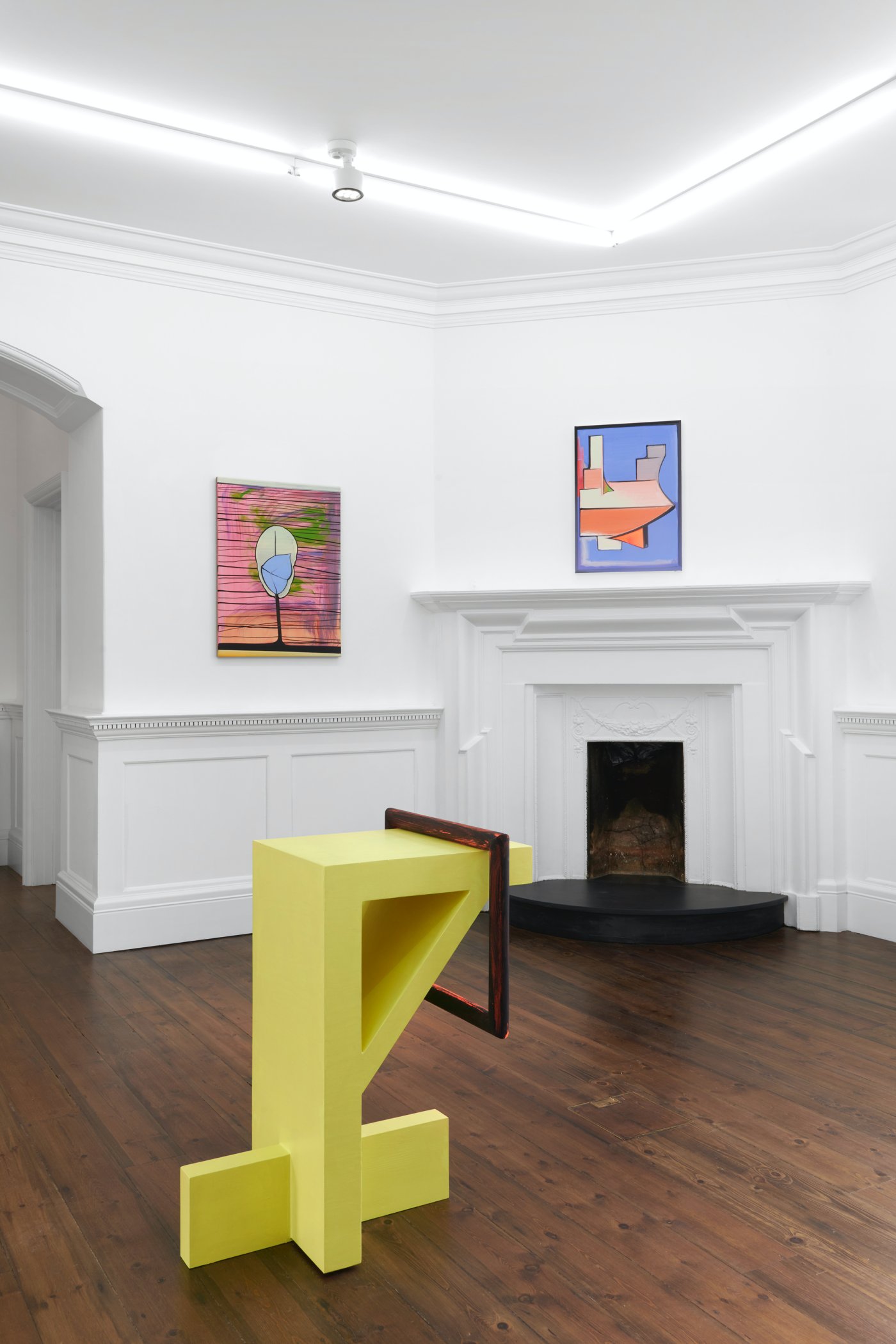 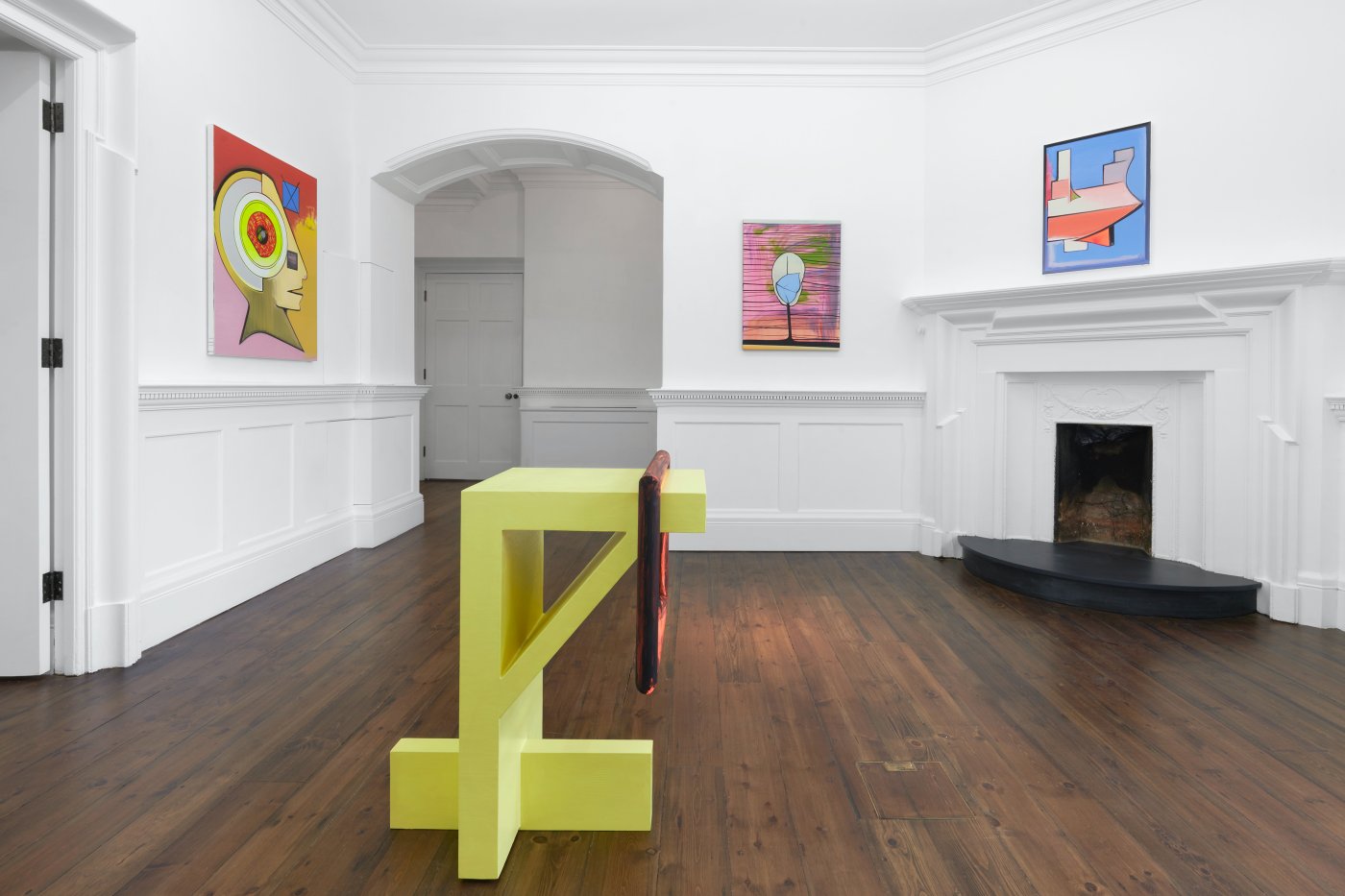 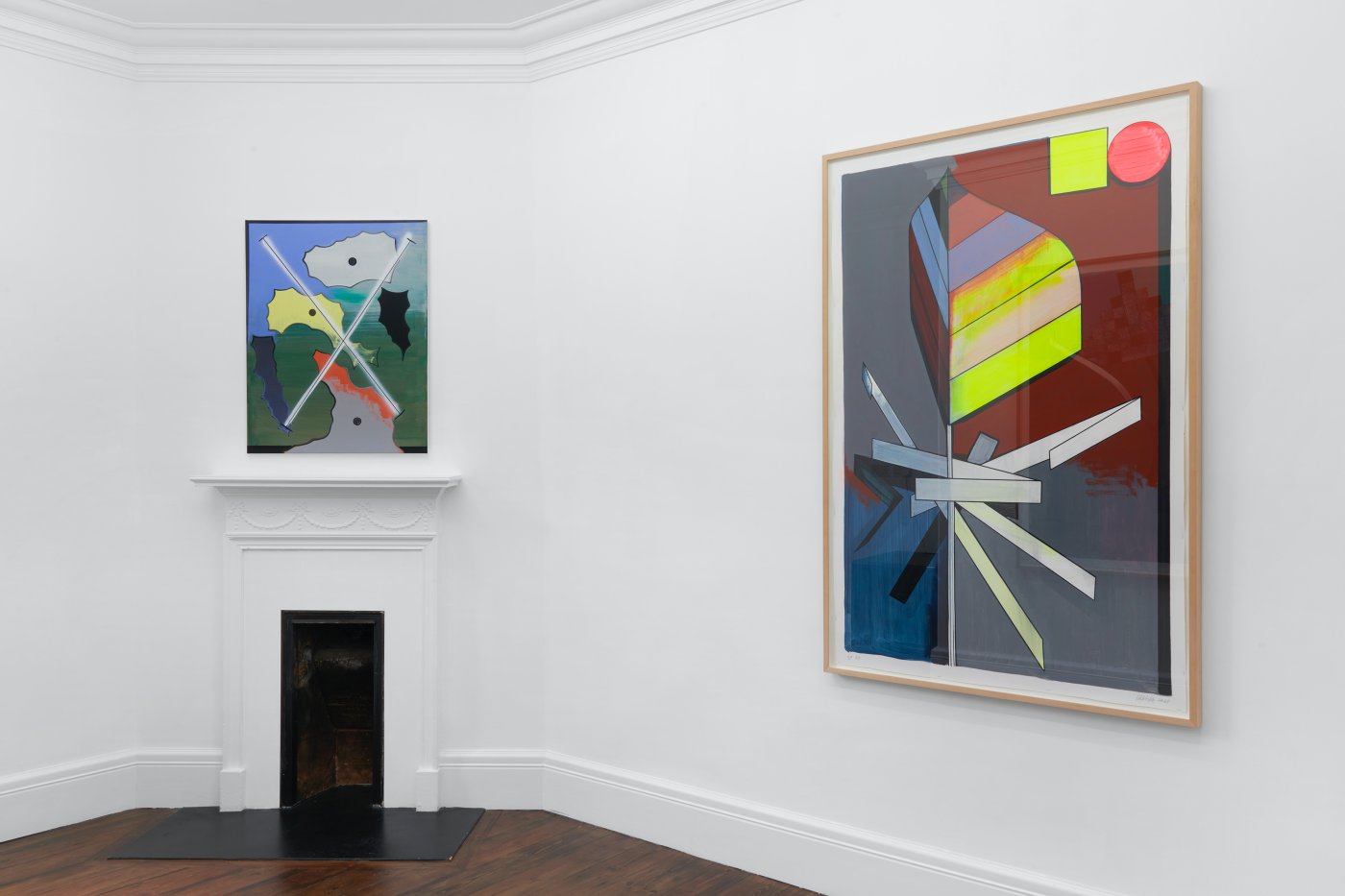 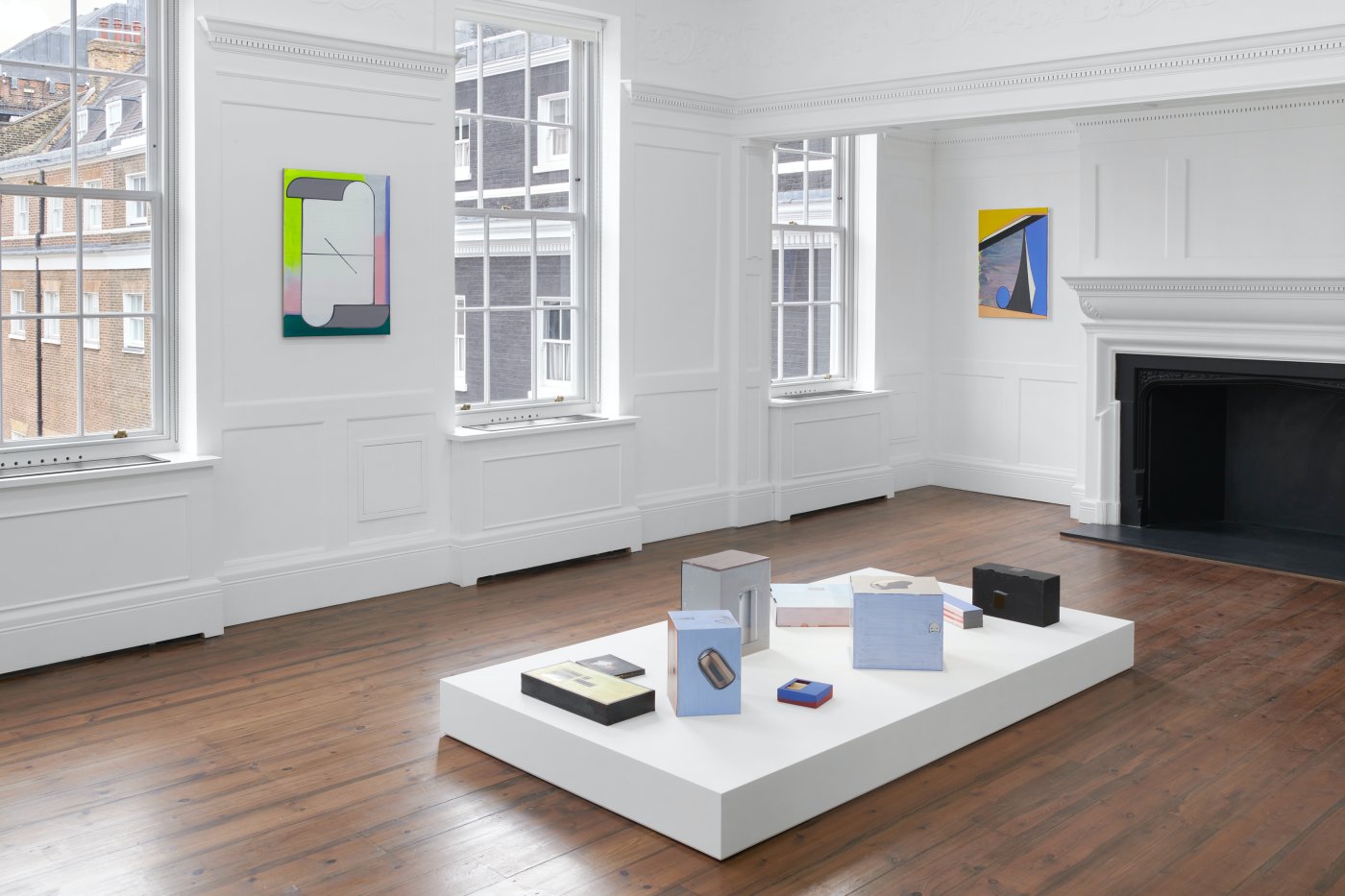 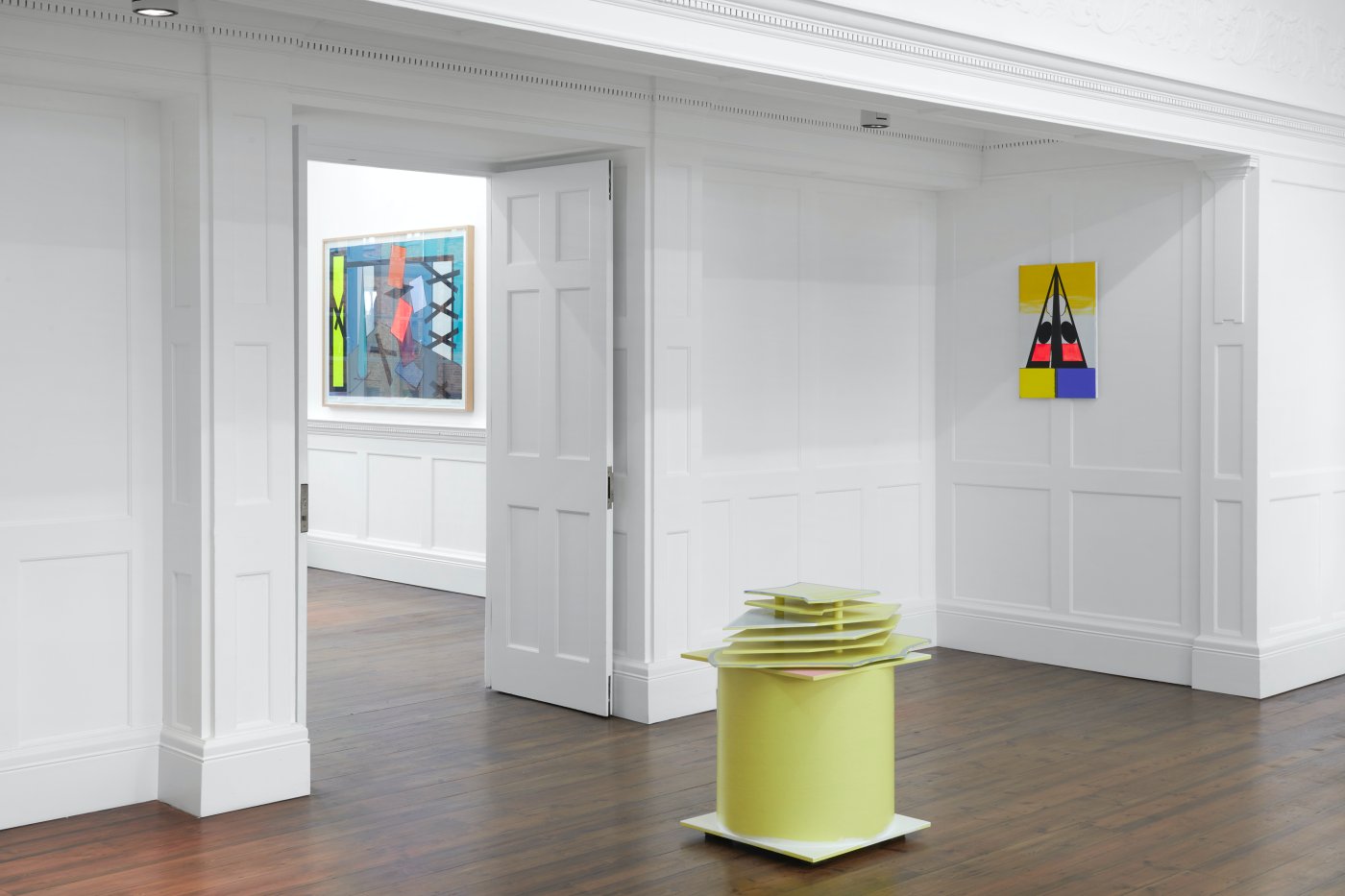 In a practice that creates intrigue through a movement between the precipices of figuration and abstraction, Scheibitz looks to this liminal space, drawing from both art historical references and his vast archive of printed material to offer a complex visual of our time. The show features paintings, sculptures, and a continuation of his numbered group of works gp, large works on rag paper.

The definition of the term and the exhibition title Black Swan describes a singular event that occurs unexpectedly, typically an occurrence that is considered to have a low probability but high impact, and only in hindsight is determined to have in fact been predictable. Thus, the title of the exhibition is a metaphor for the present time as well as for painting or the painting itself.

A recurrent motif in the show is an oblique X or cross-shape. In gp 314 they are black and appear across the surface, seemingly stitching together different planes within a fairly undefined space, appearing as both part of the architecture and floating within it. The white cross-shape at the forefront of Echo is more like a redaction of sorts, glowing ethereally atop a number of rough-edged forms that appear like both sheets of paper and boundaries on a map. Such recurring forms function as both object and sign, adhering not to solely mimesis nor symbolism, looking to implement a sense of order whilst simultaneously letting it fall apart.

Likewise, the face in profile of Joker II, resembling perhaps a dissected android specimen in the process of reconfiguration, is anchored around a central circle that could be an iris, turntable or digital interface. With the facial features reduced to a series of disparate yet still recognisable forms, the work’s title creates allusions towards a deck of cards or the superhero villain. The similarly biomorphic properties of the figure in gp 312, a silver-clad torso appearing as avatar or medieval suit of armour, are confined to an indeterminate space, again operating between image and object.

Scheibitz posits events and spaces that can therefore be conceived of as black swans in themselves – hitherto unforeseen yet upon realisation in fact quite recognisable. In his work, the process of painting is not predictable, despite a fixed plan or concept. The probable or improbable interlocks with the impossible event, which at best may verge on invention. For Scheibitz, the term also belongs in an artistic realm because it stands for the certainty that things are not one-sided, that the world, or the image one makes of the world, remains unpredictable and thus unique.