Maureen Paley is pleased to present the third solo exhibition by Thomas Eggerer at the gallery and his first in our Studio M location. 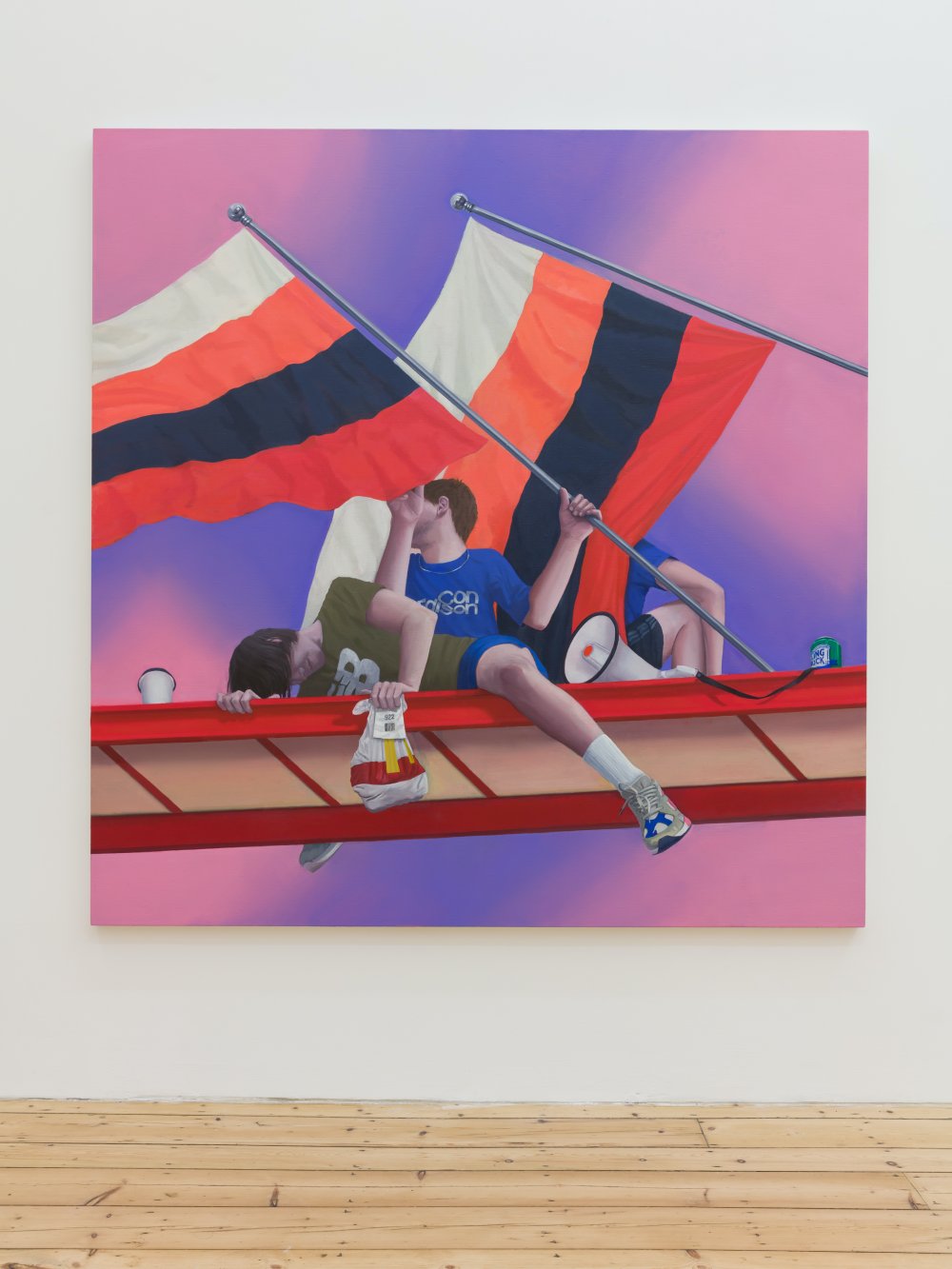 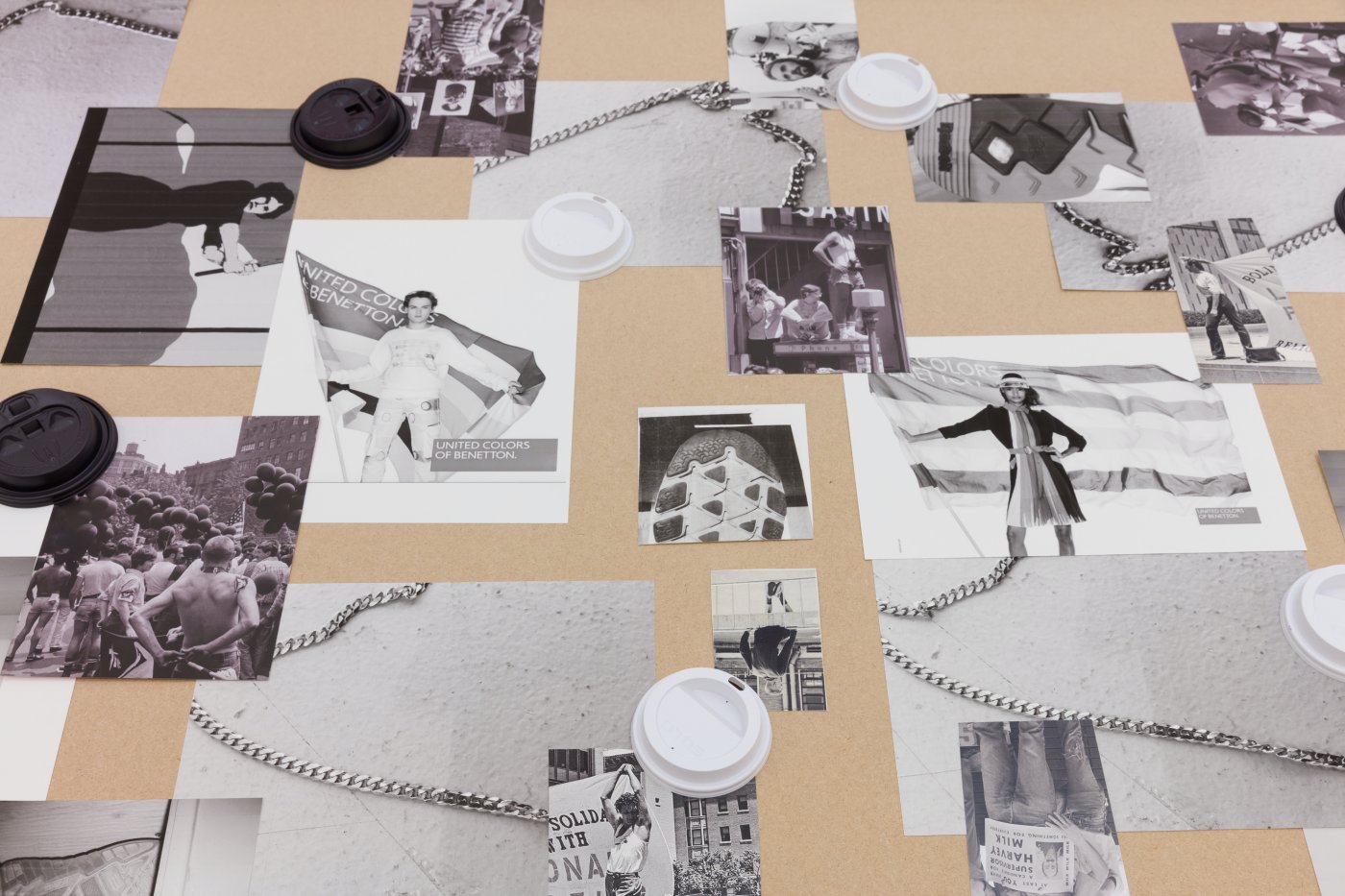 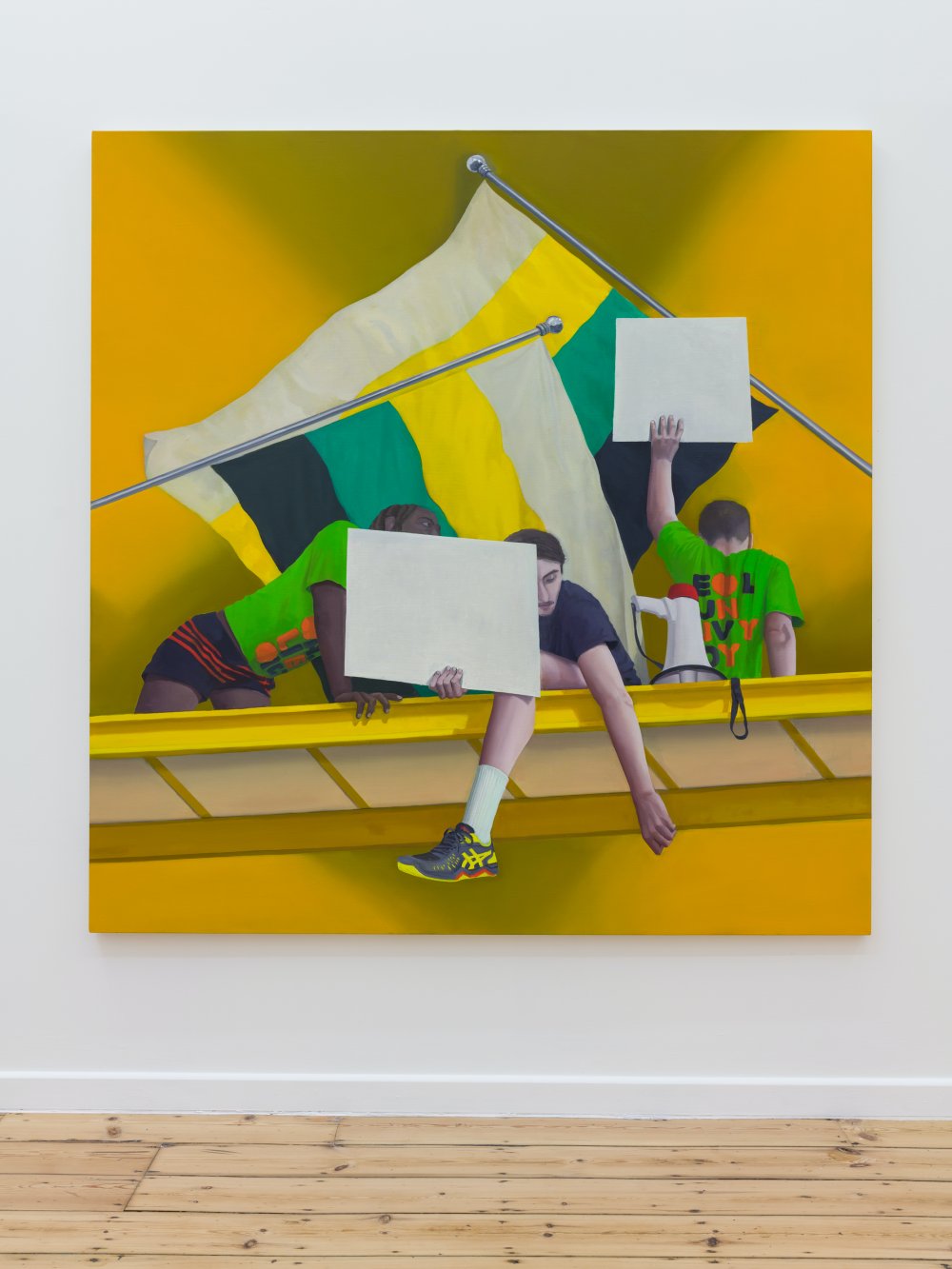 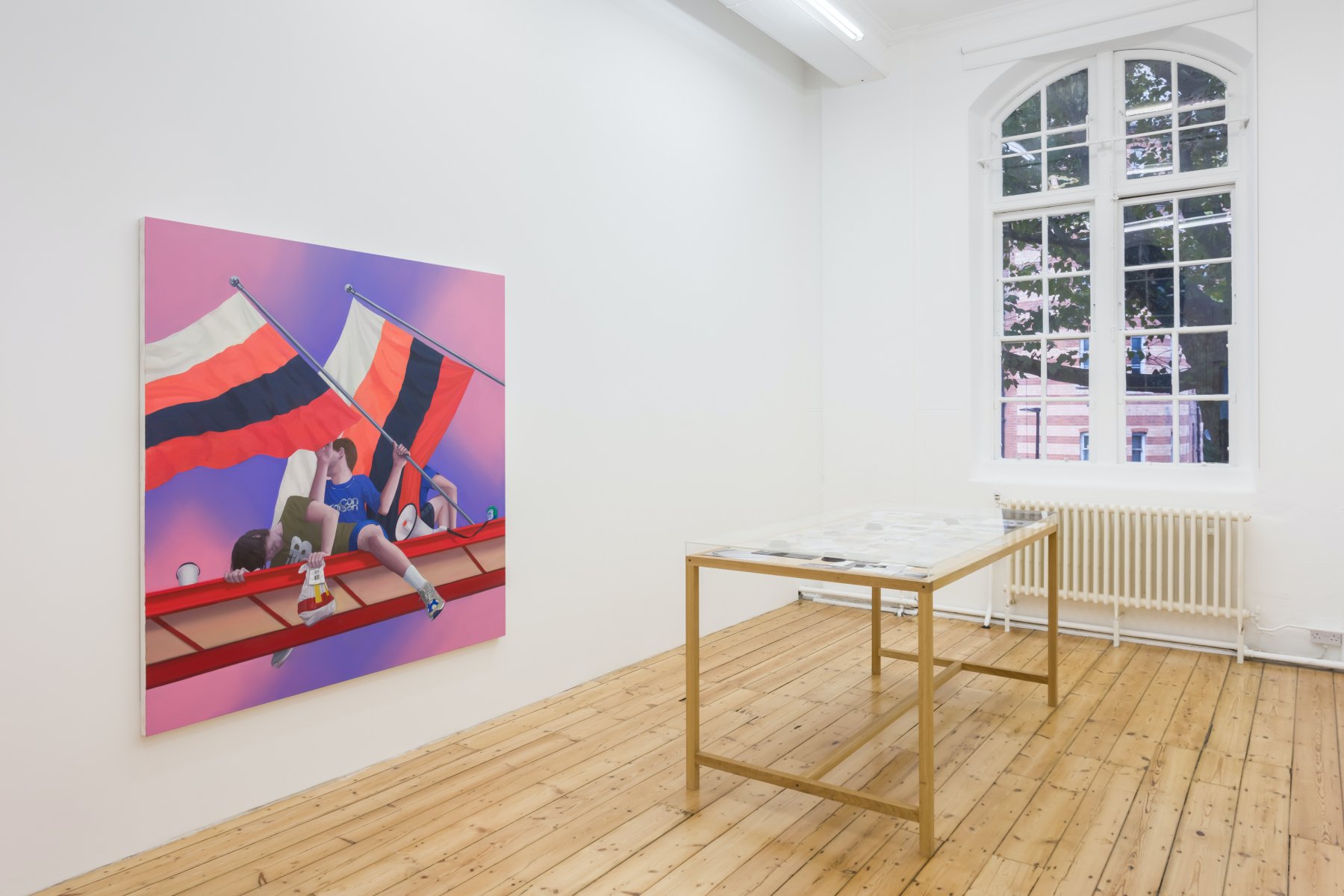 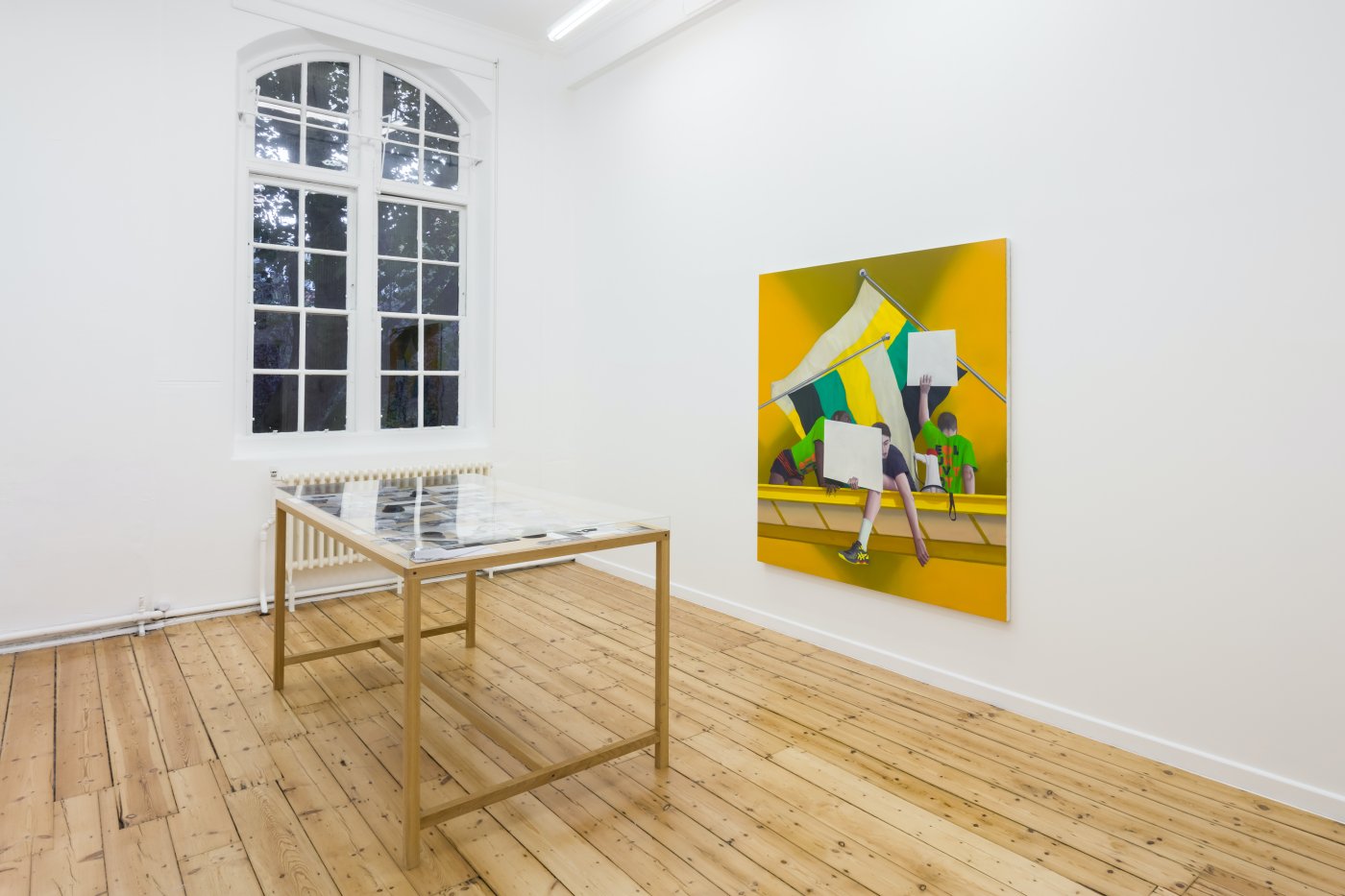 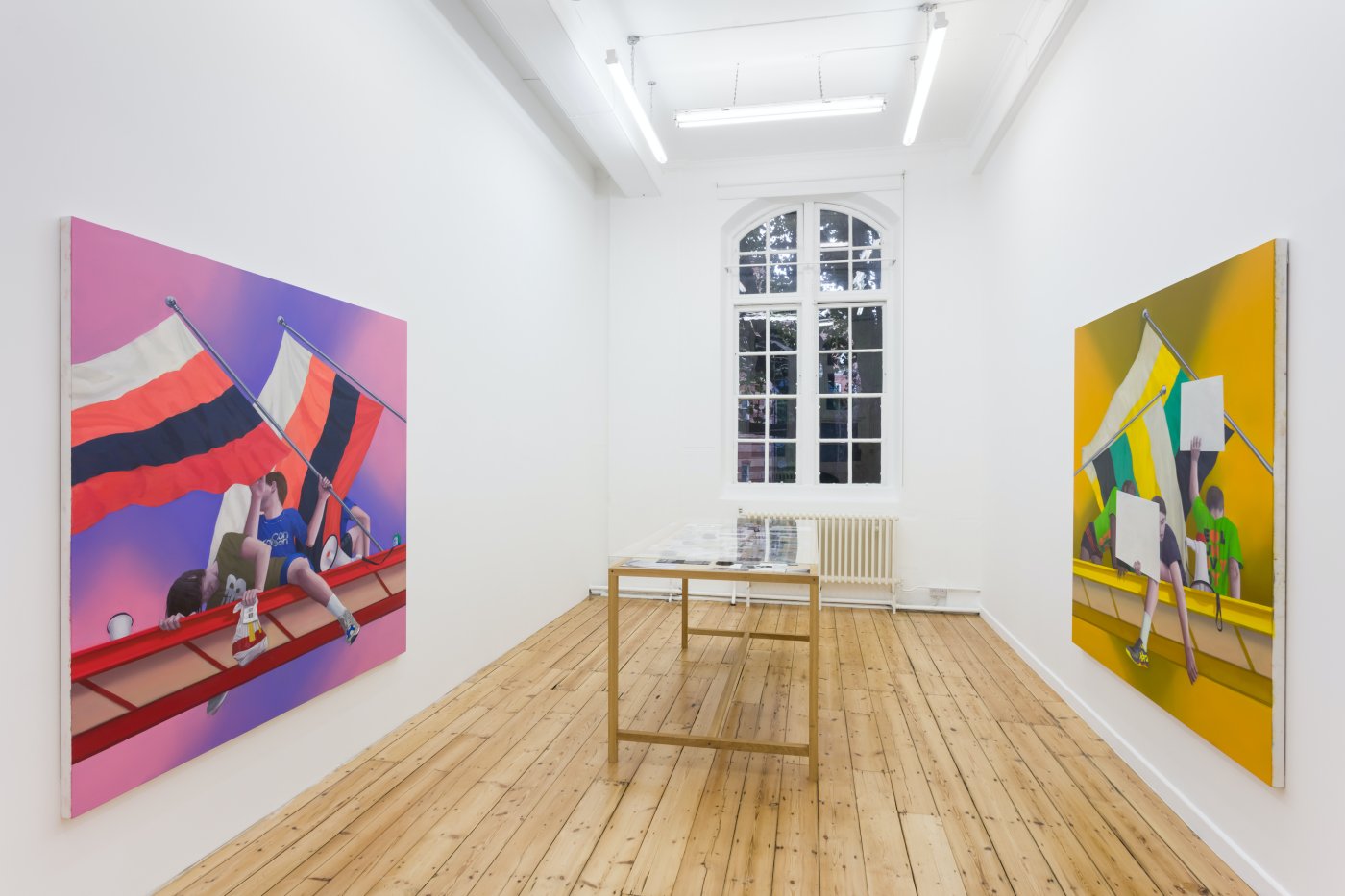 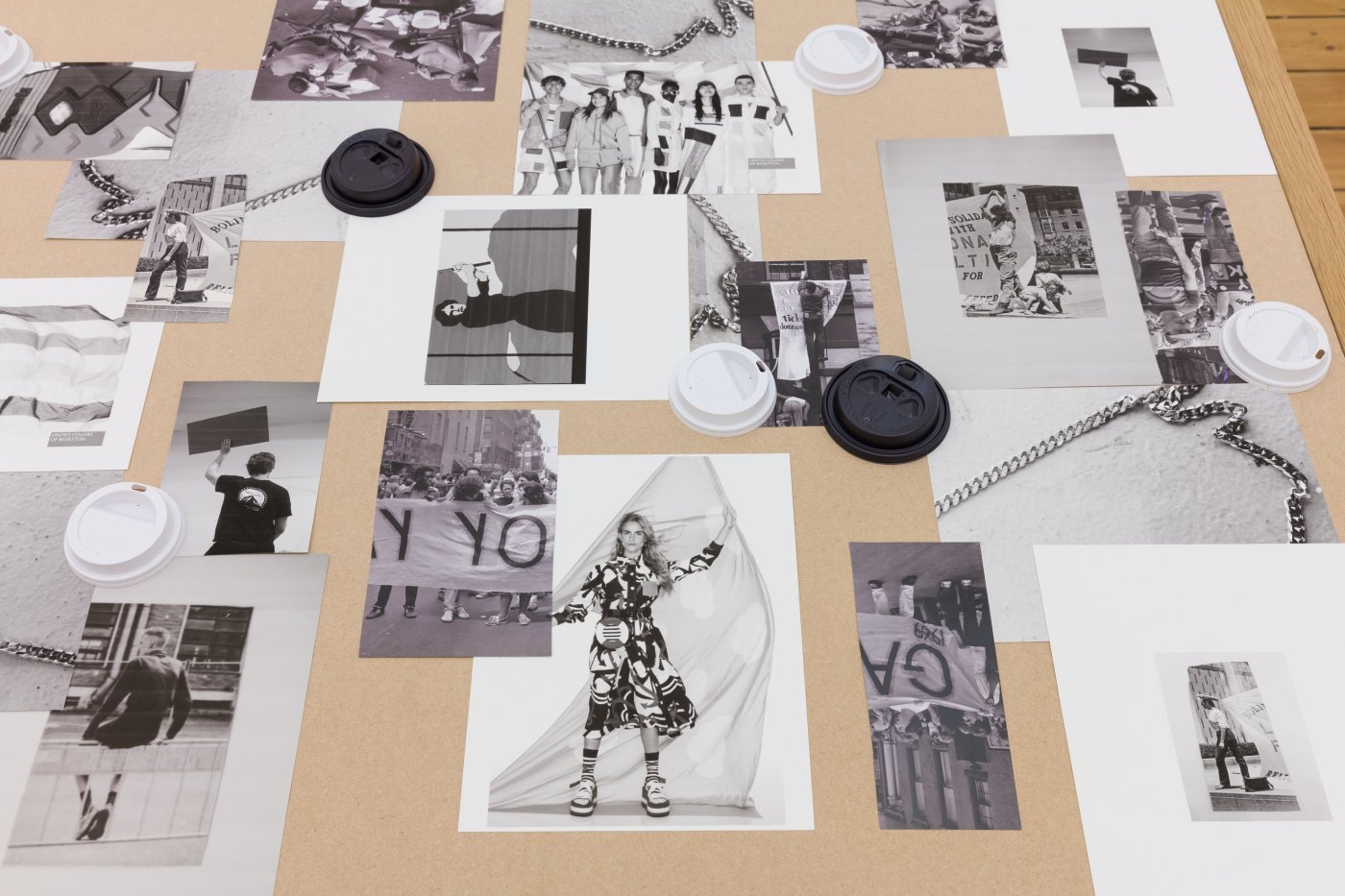 “My ongoing interest in the fragmented body informs the two paintings in Stranded. Depicted in each work are groups of three figures who appear to be involved in a protest, waving flags, and holding up signs. As in previous works, these gestures are rather ambivalently directed towards an imagined audience and the flags and signs shelter the figures from the inquisitive eyes of the viewer or some other threat. Blowing in the wind, the sail-like flags indicate arbitrary energy and unlimited movement, contrasting with the restricted passivity of bent bodies and dangling extremities underneath them. Hands and legs appear to be attached to torsos as if they could be removed or repositioned. This generates an image of the body that is somewhat unstable or questionable in terms of its’ coherence. The figures are rendered just under life-size, giving them an appearance that is reminiscent of a ventriloquists’ doll – apparently active while surrendering to gravity, simultaneously inanimate and alive. The unemotional demeanour of my figures combined with the fragmentation of their bodies aligns with a realism closer to the puppets and automatons of Surrealism and Dadaism than to a less conflicted type of Realism, which often engages in more affirmative representations of the bipedal human.

The question of bodily cohesion is deepened by the fact that these figures are seen from underneath and this perspective obscures the visual information of what is happening on the scaffolding. As with most of my figurative paintings, the economy of what is visible and knowable versus that which is opaque, and unknown are important concerns. When concrete information is given, in the form of identifiable logos or recognisable merchandise, it accentuates the lack of knowledge the viewer has about the core topicality of the works. Protest? Against what? Whose flags? Beyond this, the figures’ modularity brings out a mechanistic quality that is apparent across the whole painting. All the visible details of the works are synthesized to build an integrated choreography that does not make a distinction between body and backdrop or figure and ground. The background colours suggest an artificially lit setting that could be an interior space like a photographer’s studio to pose the question is it a staged photo?

The two paintings in Stranded are contextualized by a collage made up of found images and disposable coffee-cup lids that are laid out in a vitrine. While they seem to hint at a specific moment in time or provide a historical context for the paintings, they do not offer any concrete references to time and place.”