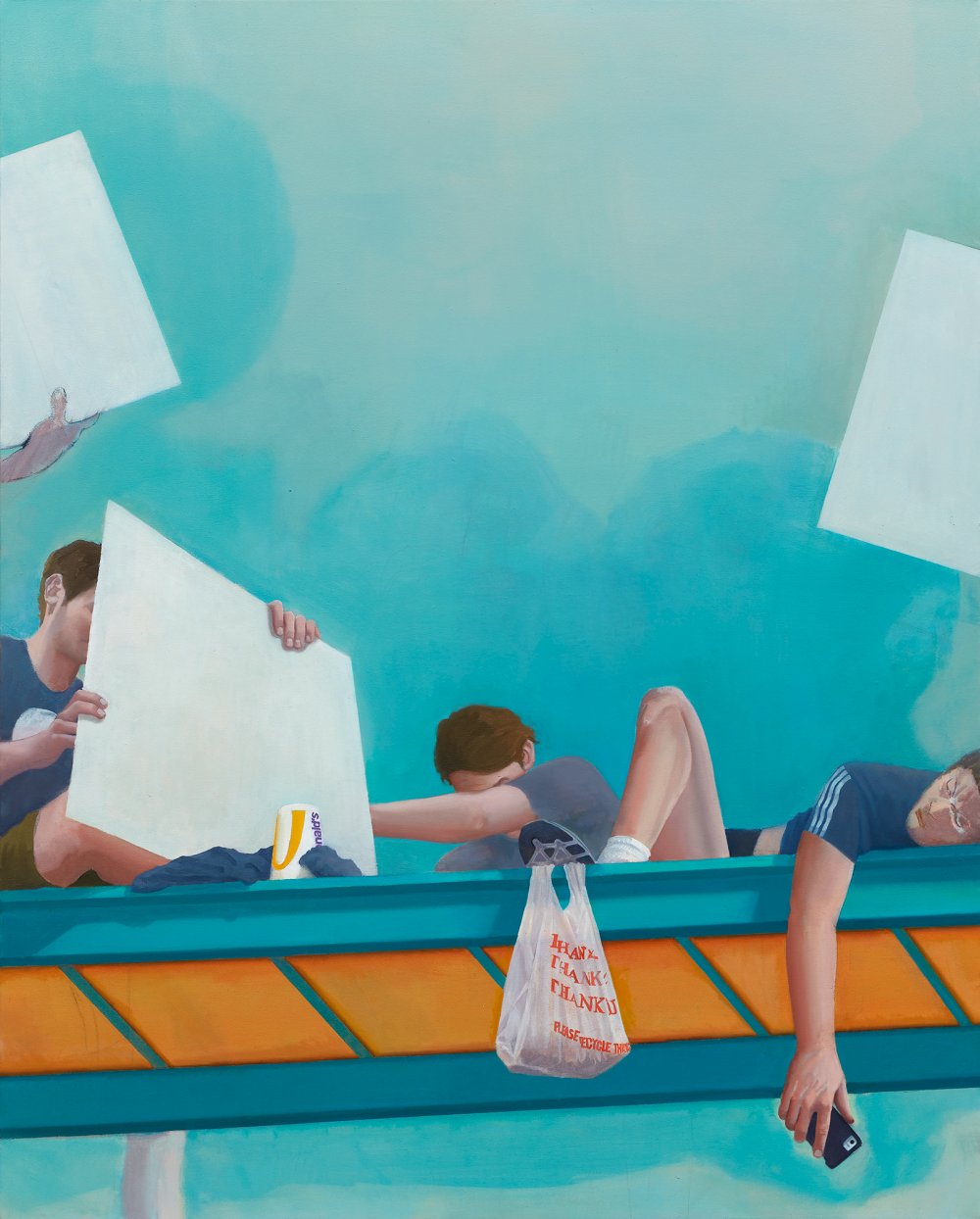 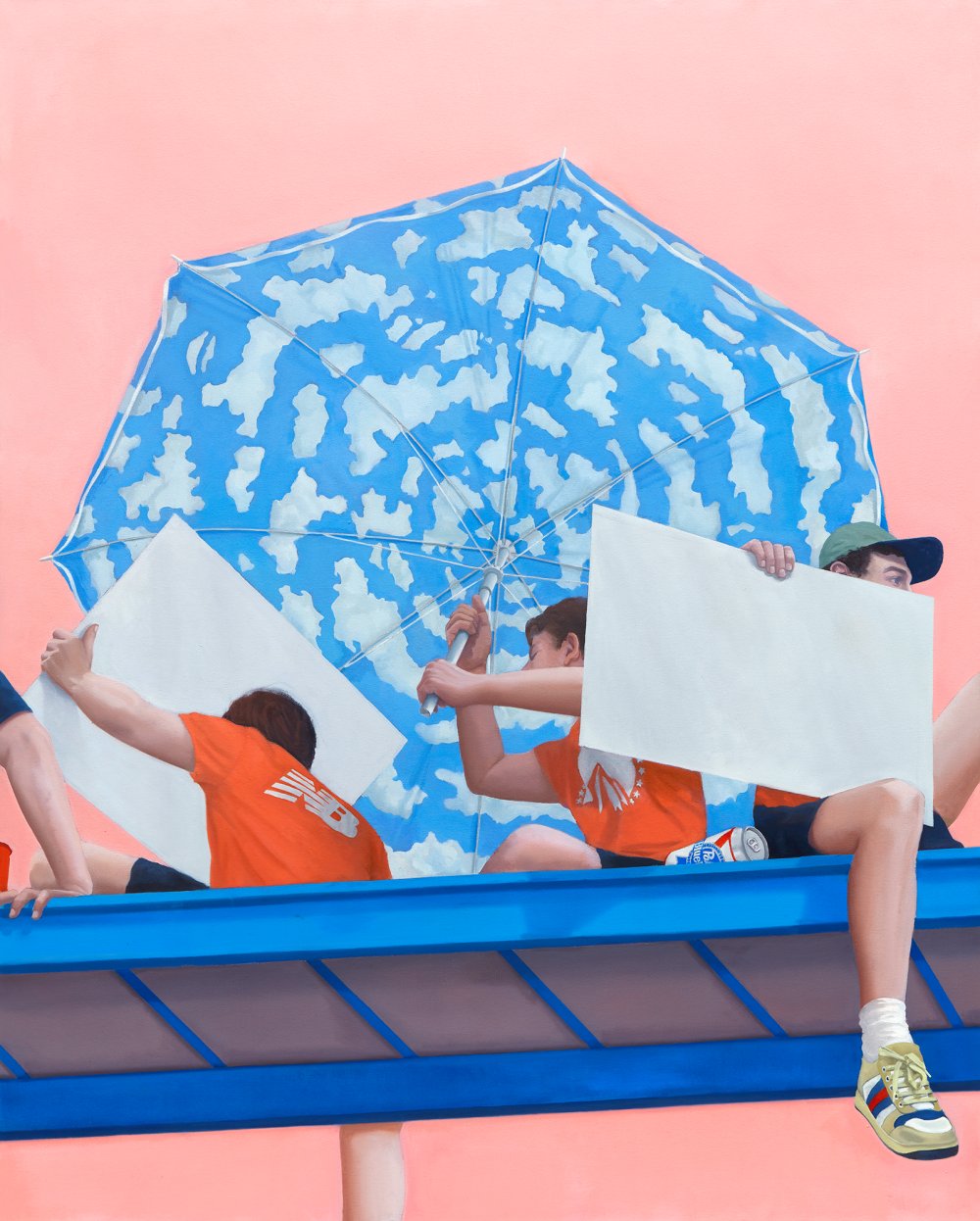 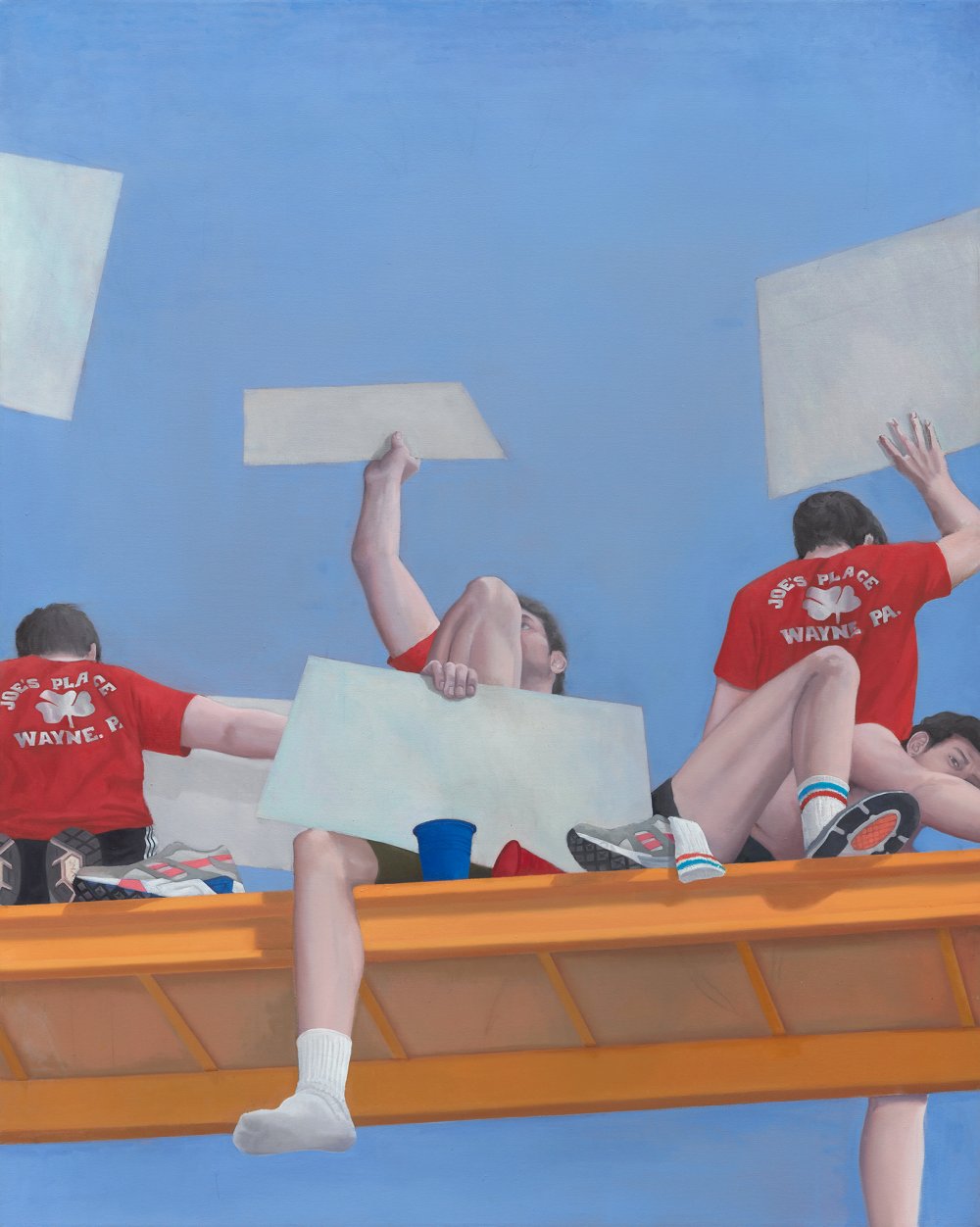 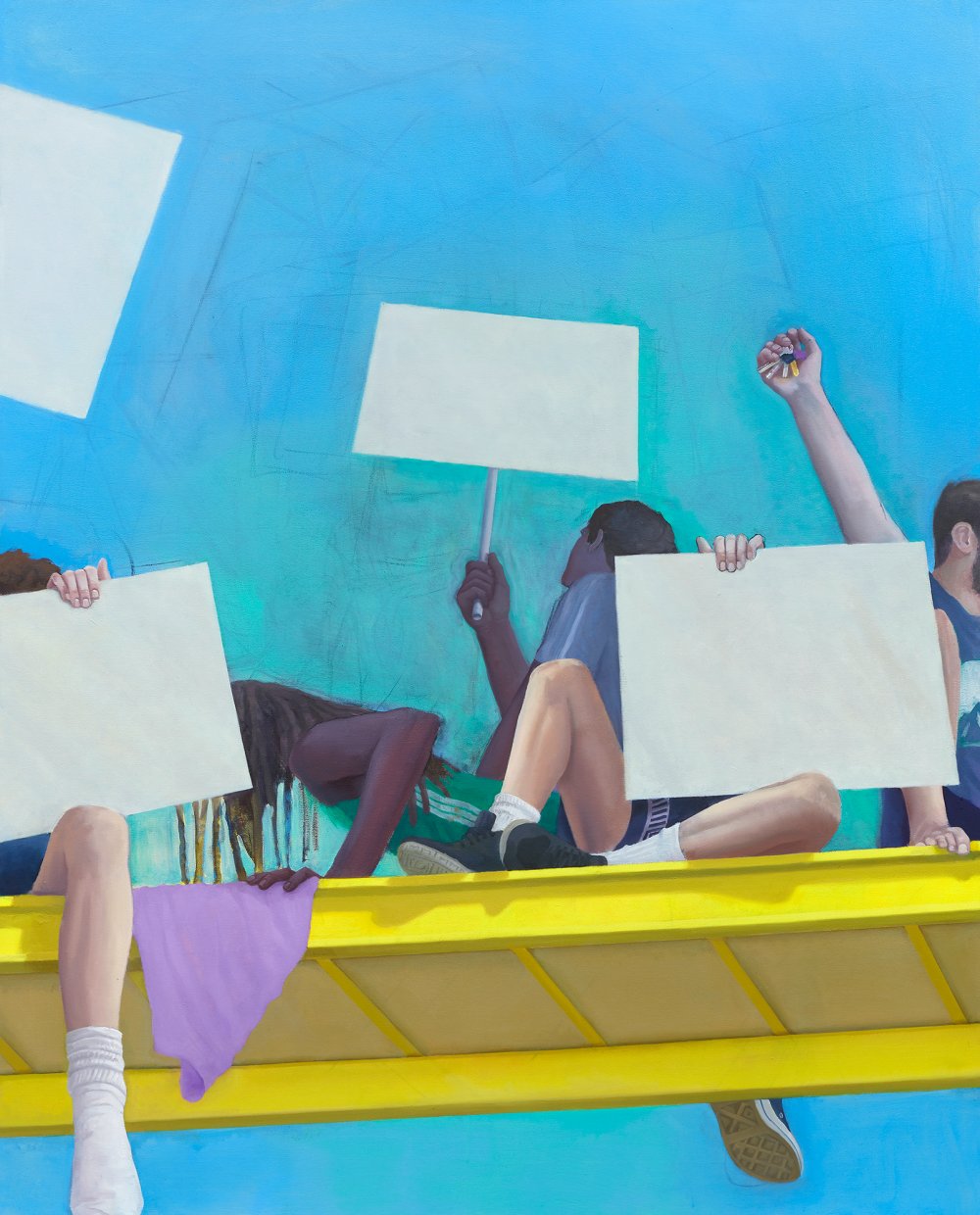 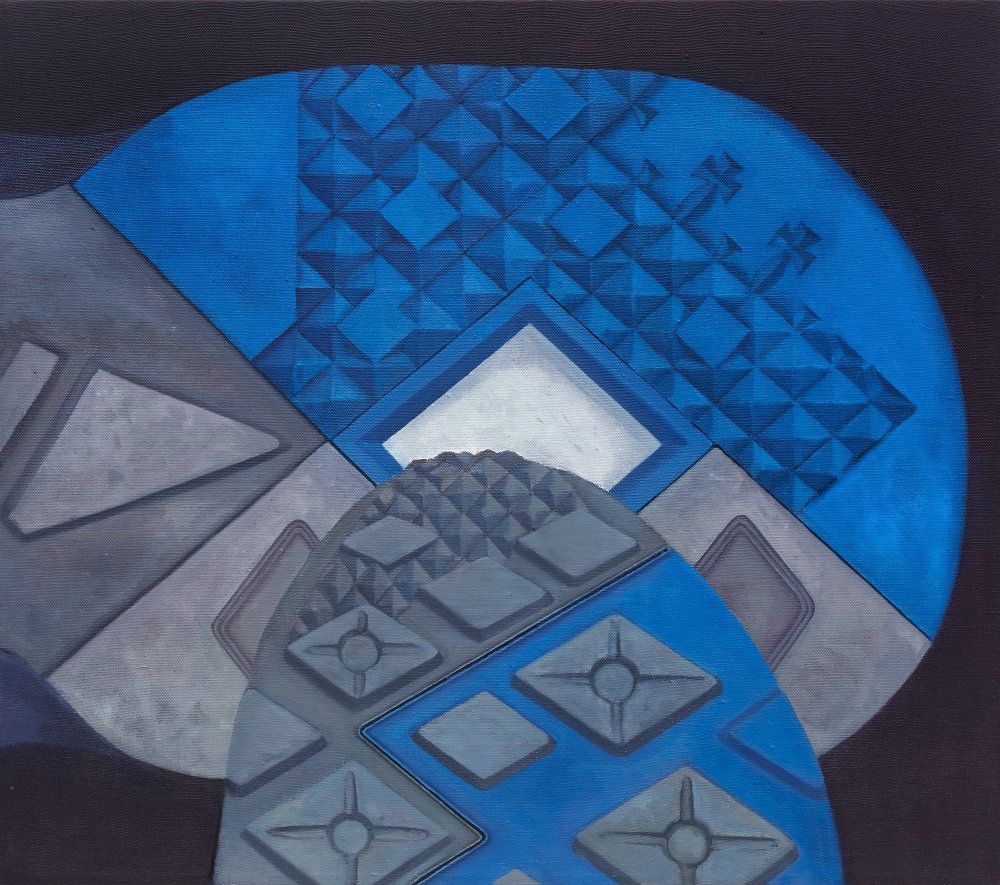 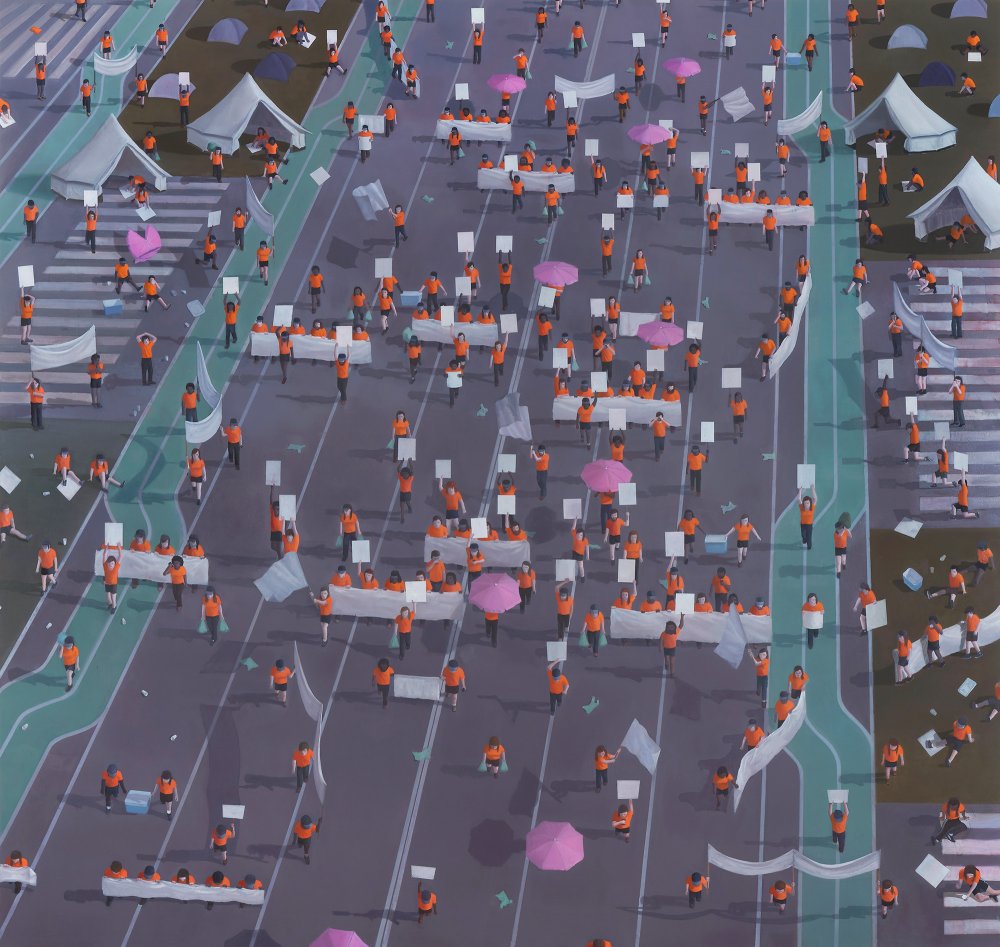 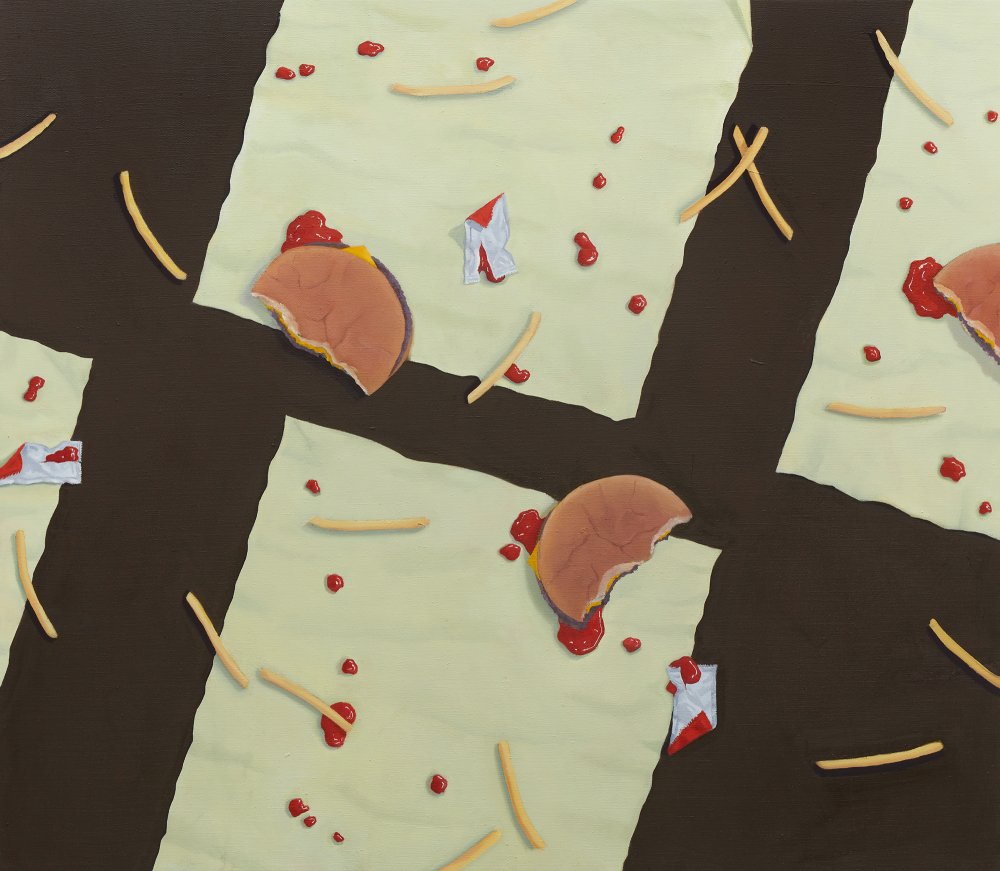 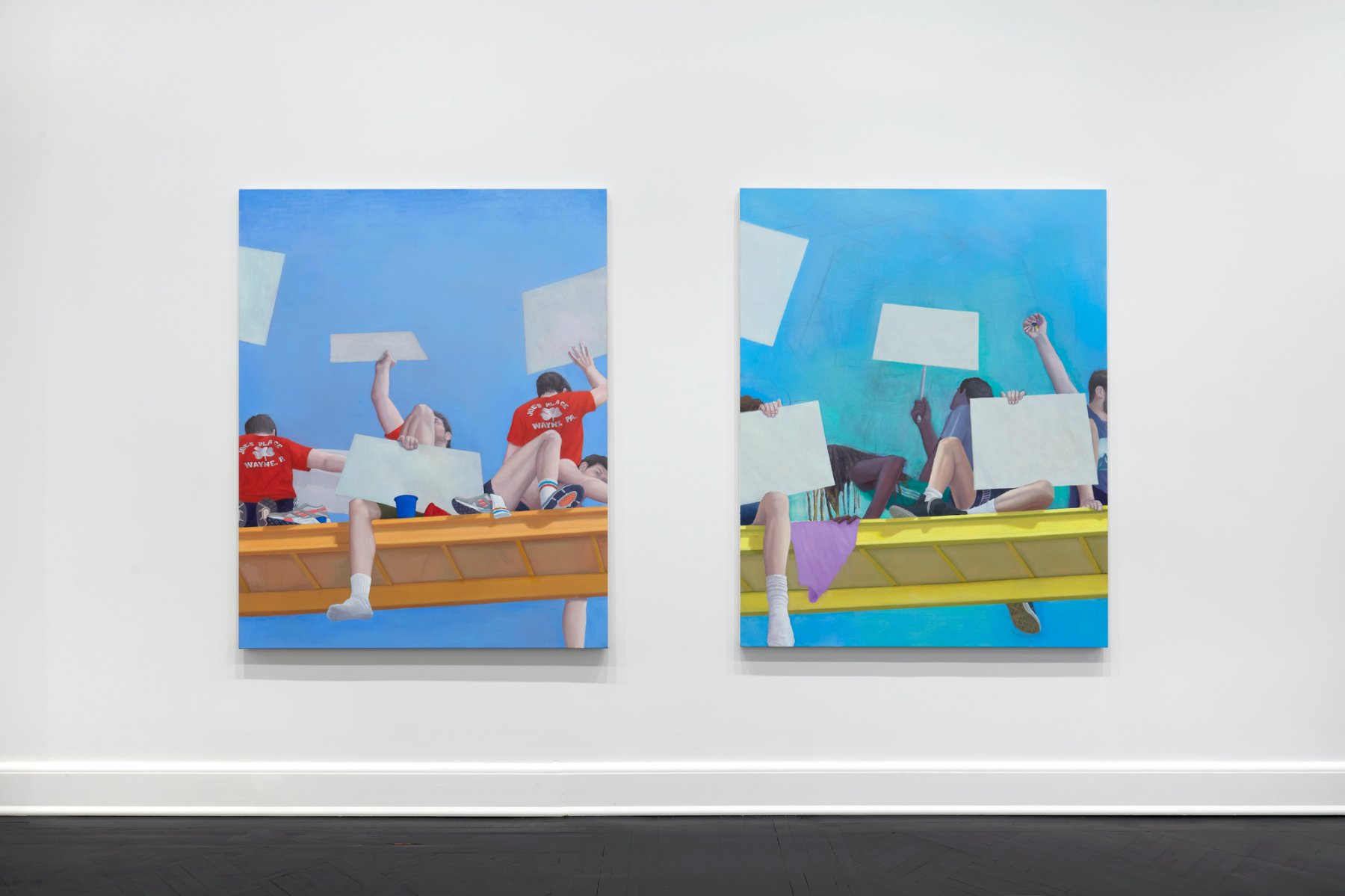 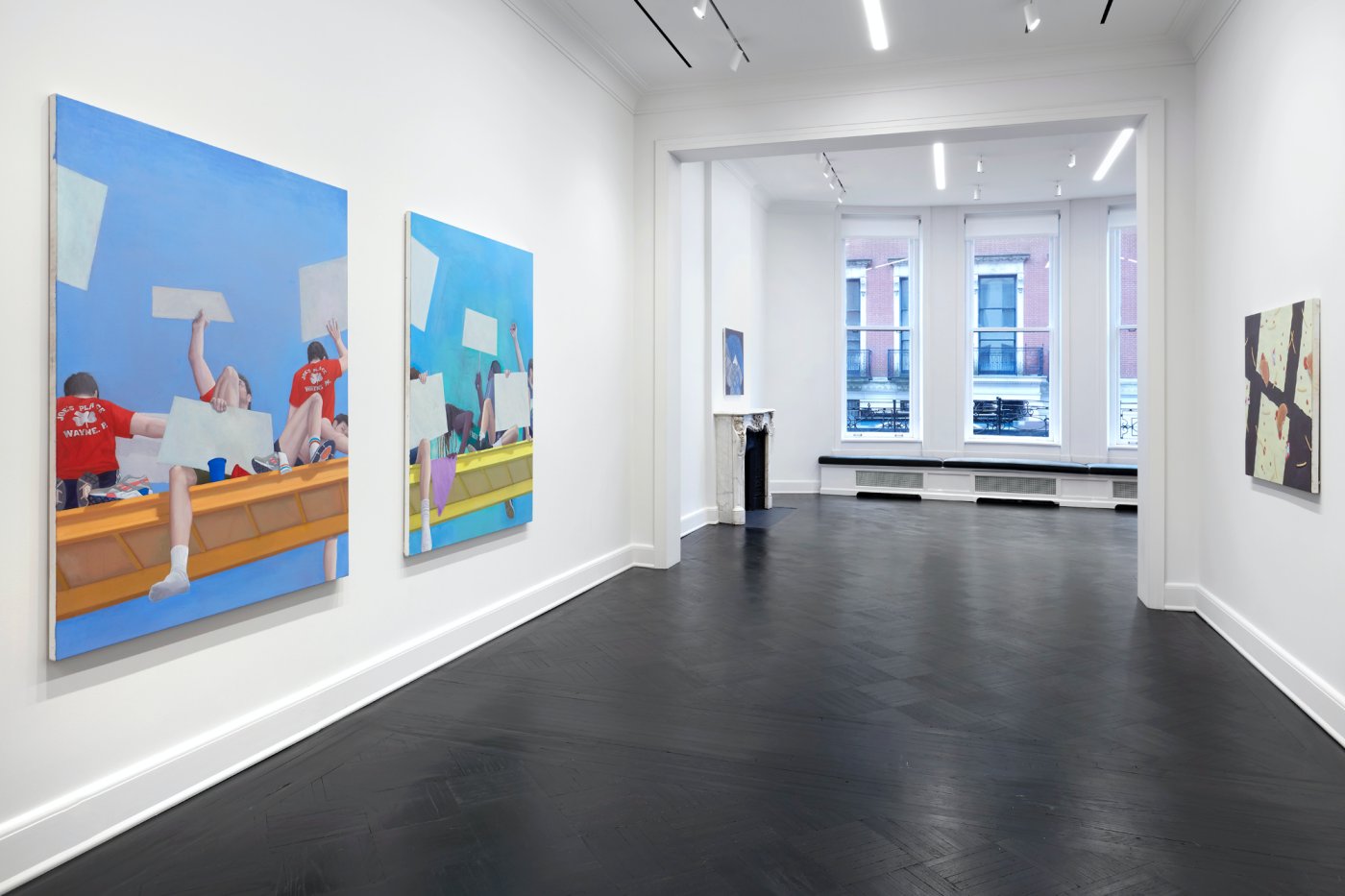 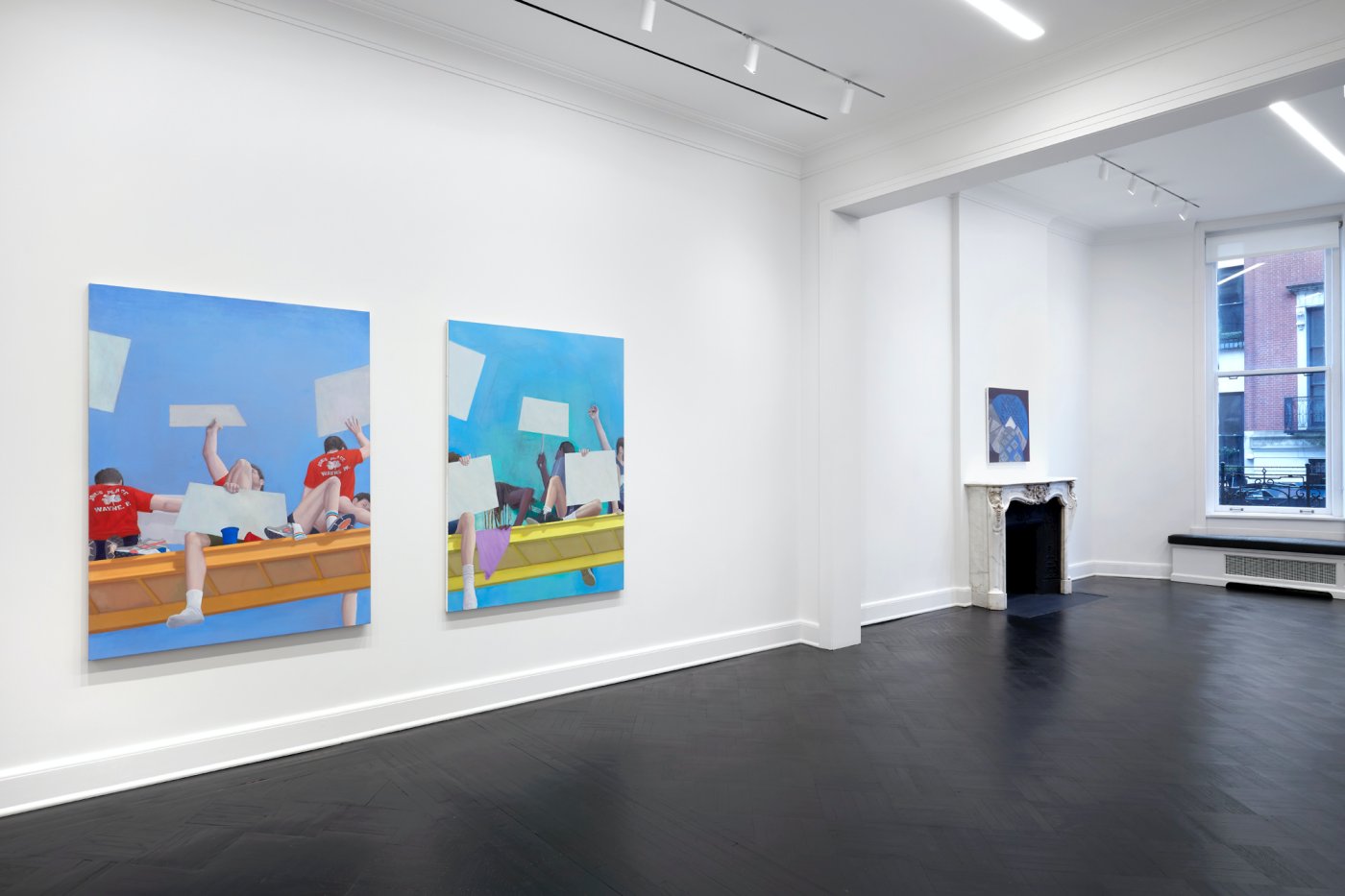 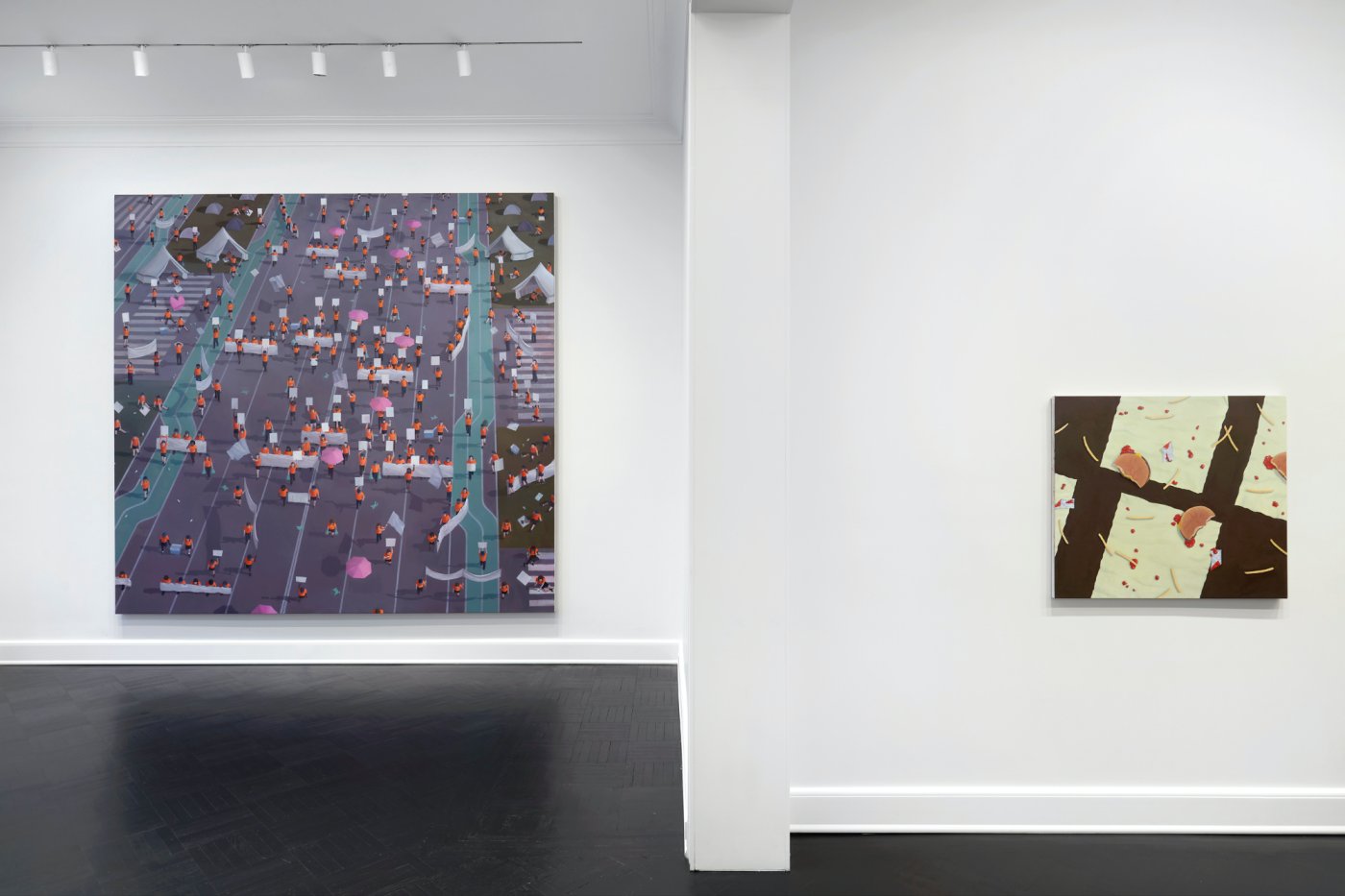 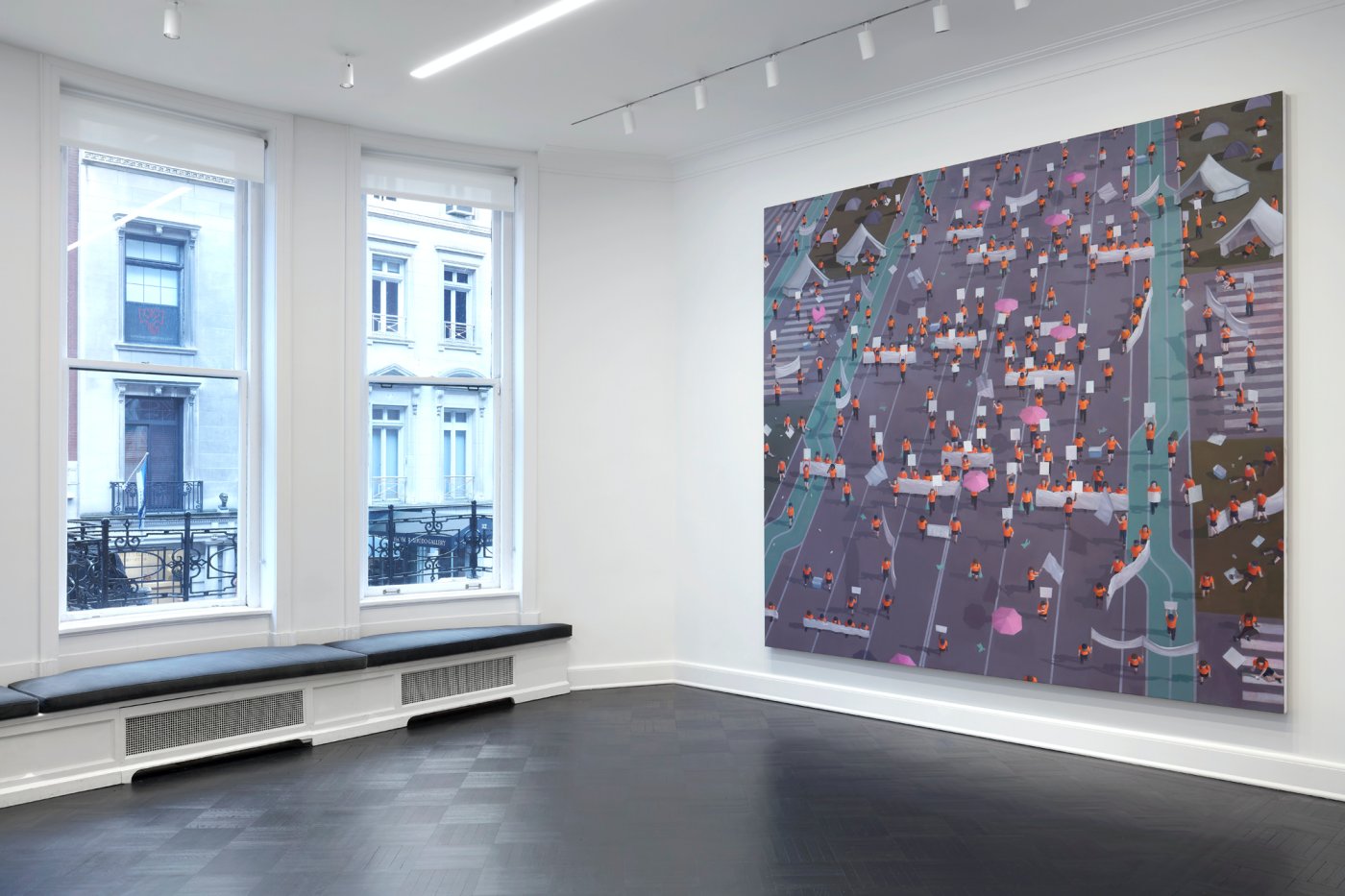 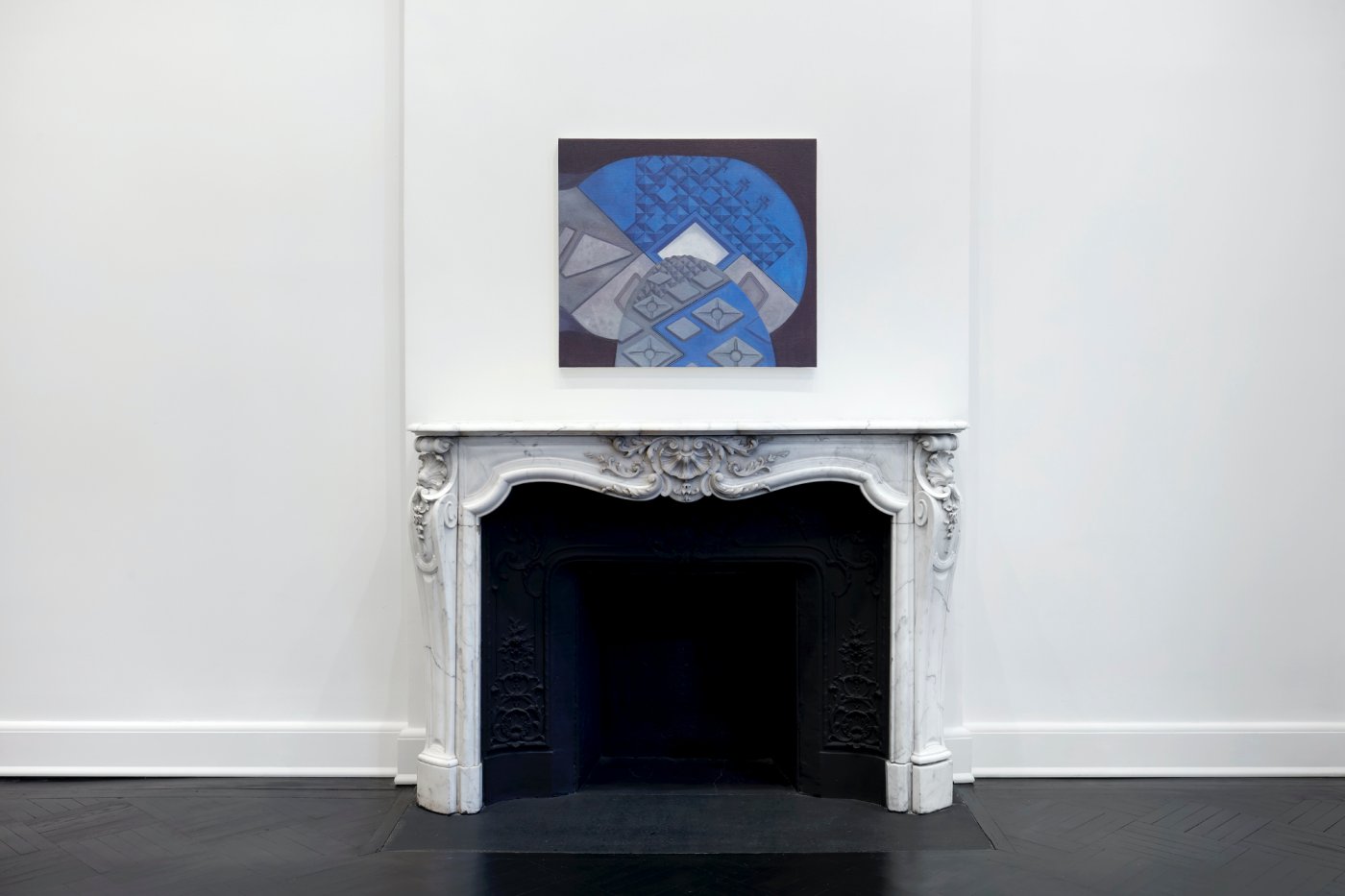 Corridor debuts a large-scale painting that Eggerer began the drawing preparations for two years ago, and an accompanying series of works developed at the beginning of 2020. Albeit not originally conceived as a reaction to the current moment, as a whole the show speaks readily to the social and political unrest of present times.

The exhibition takes its name from its central painting, Corridor, a massive composition featuring roughly 300 figures uniformly dressed in an orange top and, seemingly, involved in some sort of protest, event, or march. On one hand, the painting underperforms ideas of a vivid street protest, while alluding to the modernist motive of the “mass,” yet the quantity of figures assembled does not add up to a mass size and features no singular focal point. While Eggerer has produced other colossal, multi-figure paintings in the past, Corridor, is formally the most challenging one. This work introduces geometric shapes (rectangles in the form of posters, circles in the shape of umbrellas, tents and semi-circles in the form of curved banners) and combines them with an underlying diagrammatic street plan. Questions of voluntary action, authority, and control are always embedded in Eggerer’s complex multi-figurative works. In Corridor, surveilling power is granted to the viewer, who alone is able to scan the entire scene with a birds-eye-view.

Akin to his interest in the work of German modernist printmaker Gerd Arntz, the figures in Corridor are not rendered with an intent to realism. Like other small-sized figures in Eggerer’s work they seem to, rather, be derived from toy-like figurines, which emphasizes their modular, standardized character. On first sight, many of the details seem to conform to the visuals of street protests, however, upon further inspection, the scene is eerily devoid of any carnivalesque exuberance or emotional expression. The posters and banners held up by the figures are monochrome and blank, not bearing any inscription or message. Flanked on both sides by spectators donning the same orange uniform, the crowd seems to perform a muted, somewhat ritualistic procession. There is an emphasis on the parameters of the arena and, like when in a corridor, the inevitability of moving forward.

Corridor is contextualized by a group of paintings featuring figures sitting on a scaffolding. They also hold up empty signs, the monochrome posters generating an ambivalent gesture. They appear both oriented outward, displaying an invisible message to an imagined audience, while simultaneously seeming to have a protective function, as if shielding themselves from unwelcome intrusion. In these paintings, the perspective of “corridor” is reversed. Here the viewer is positioned underneath the scaffolding, looking up to the figures. However, only fragments of the bodies are visible. Eggerer seems uninterested in depicting distinct bodies as intact individual entities. Instead, the viewer is confronted with dangling or propped up legs and feet, agglomerations of predominantly male body fragments assembled in a multi-perspectival collage. The erotic charge in these paintings derives from both the fetishistic display of the rendered flesh and the subtle interplay of what is exposed and what is concealed.

The works in Corridor appear to carry a faint echo of propagandistic imagery, like that of socialist realism, while the smaller than life-size figures on the elevated stage enforce the association of a puppet theatre, where actors are being held up by invisible strings or collapsing onto the scaffolding floor. According to Freud, the uncanniness of the puppet derives from the fact that it appears unclear if it is dead or alive. Eggerer’s figures don’t resemble dolls, but their unemotional demeanor combined with the fragmentation and cropping of their bodies brings his realism closer to the puppets and automatons of Surrealism and Dadaism than to a more traditional type of Realism, which often engages in less conflicted representations of the intact bipedal human.