The Woman Who Walks With Me

The Woman Who Walks With Me

Is this poem mine or is it another’s?
I am this woman who walks with me
And renews my speech and to my ear
if she speaks no love, she soon grows silent?(1)
-Hilda Hilst, Sonetos que não são, from the book Roteiro do silêncio, 1959 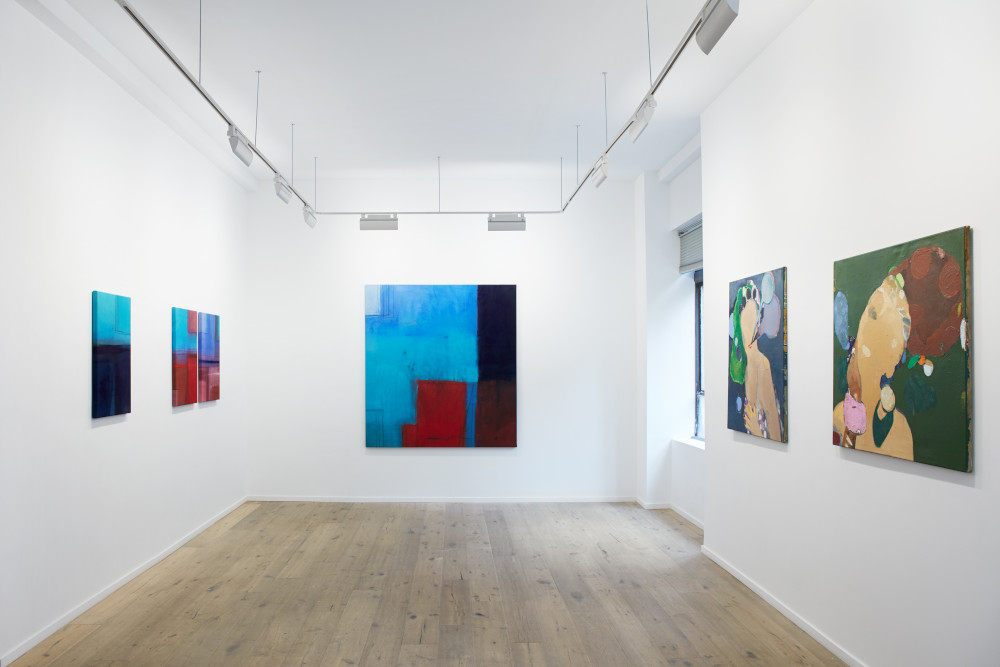 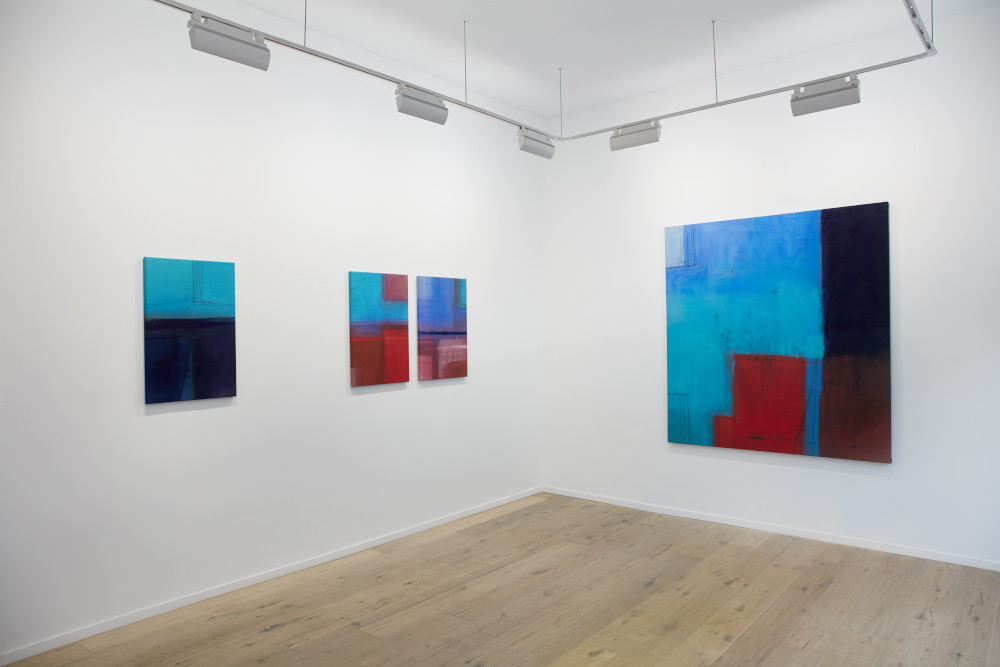 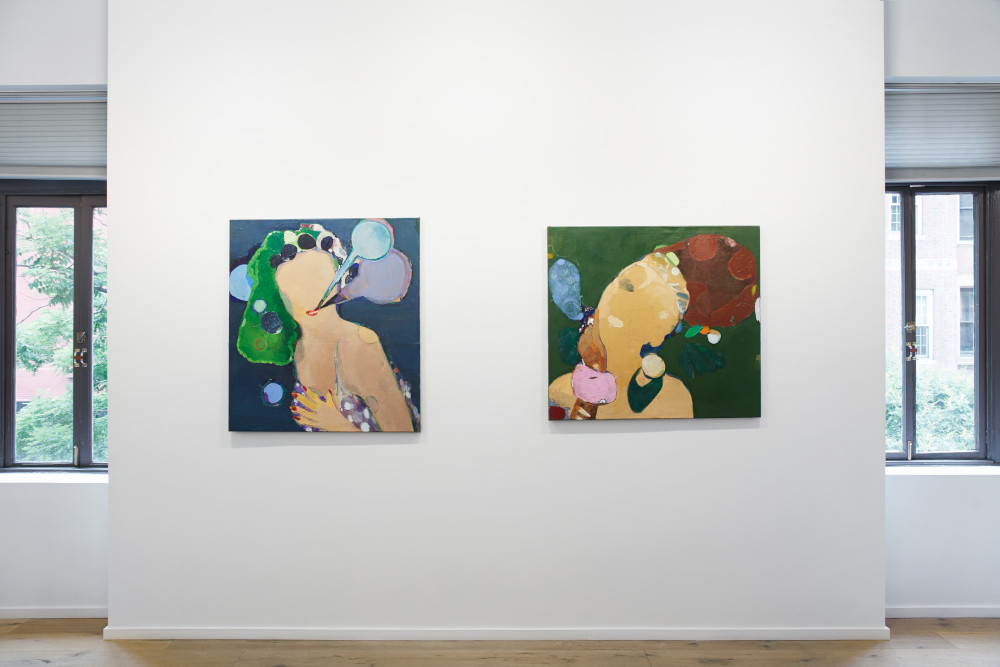 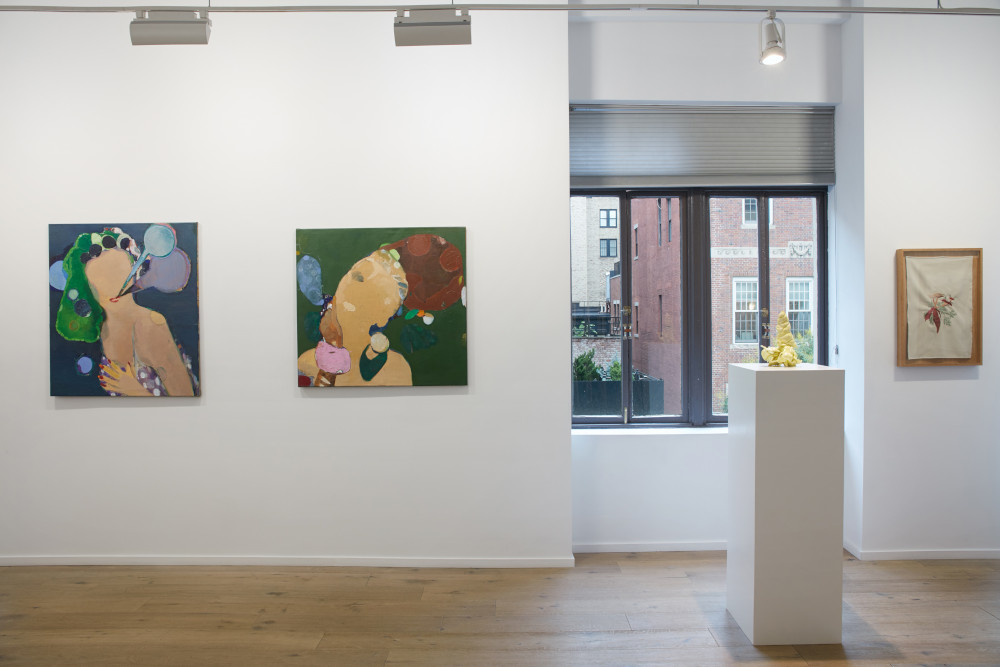 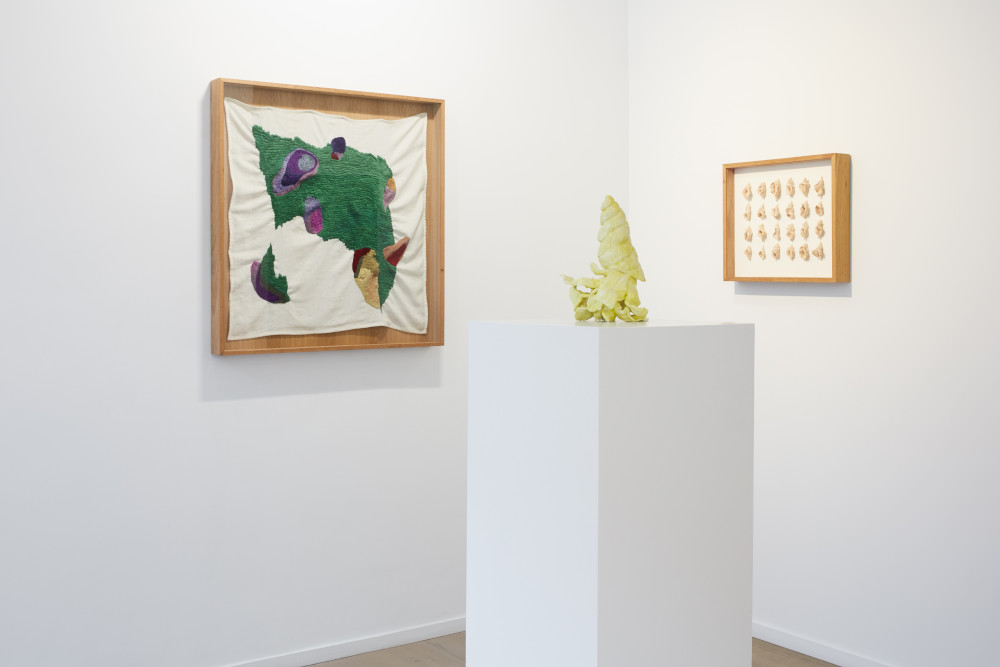 The Woman Who Walks With Me looks at the poetics at the core of the three artists’ practices as they engage the body, the notion of female identity and its stereotypes, and memory of family and origin.

Baltar’s embroidery and glazed ceramic works reflect on the body as sensorial space, and a means of relating to oneself and the wider world. Canale’s paintings dialogue with the history of portraiture and representation. Lambrecht’s investigations of color and light approach the body as a repository of memory and a vehicle for transcendence.

The exhibition title is inspired by a famous verse by Brazilian poet Hilda Hilst (1930-2004), whose oeuvre is marked by aspects of poetic strength that resonate in the work of the three featured artists.

Brígida Baltar born in 1959 in Rio de Janeiro, RJ, Brazil, where she lives and works.
Baltar began her career in the early 1990s with performances characterized by small and intimate gestures. The artist carried out her work inside her home, which doubled as her studio, always confining her acts to a space she had a deep relationship with. Baltar’s performances were documented and accompanied by photographs, videos, drawings, sculptures, and installations, always exploring issues from her own life and experimenting with the relationship between the body and space, and the body as a space. Most recently, the artist has been studying these same themes through manual work, such as embroidery, in which the surface of the fabric usually refers to her own skin, and ceramic sculptures, where she seeks to establish a connection between bodily forms and the earth. Her work has been included in numerous exhibitions worldwide including: Neither- nor: Abstract Landscapes, Portraits and Still Lives, Terra-Art Project, London, UK (2017); the 10th Bienal do Mercosul, Porto Alegre, RS, Brazil (2015); Cruzamentos: Contemporary Art in Brazil, Wexner Center for the Arts, Columbus, OH, USA (2014); and The Peripatetic School: Itinerant Drawing from Latin America, Middlesbrough Institute of Modern Art, Middlesbrough, UK (2011). Baltar’s work is represented in the permanent collections of the Museum of Contemporary Art, Cleveland, USA; Colección Isabel y Agustín Coppel, Mexico City, Mexico; Middlesbrough Institute of Modern Art, Middlesbrough, UK; Museu de Arte Contemporânea da Universidade de São Paulo, São Paulo, SP, Brazil; Museu de Arte Moderna do Rio de Janeiro, Rio de Janeiro, RJ, Brazil; Pinacoteca do Estado de São Paulo, São Paulo, SP, Brazil; among others.

Straddling painting and sculpture, art and politics, the work of Karin Lambrecht references Arte Povera and Beuys but most essentially embodies the gestural abstraction of her 1980s generation. Using vibrant, self-produced pigments, Lambrecht applies broad, gestural brushstrokes to hand-stitched, frameless, torn, and burned canvases, incorporating organic materials such as animal blood, charcoal, and earth. Her recurring motifs include crosses, the human body, and handwritten or stamped words that peak out from layers of paint evoking illness, death, and cure. The notion of healing, especially as embodied by color, lies at the core of her work. Most recently, Lambrecht’s work was the subject of a survey exhibition at Instituto Tomie Ohtake in São Paulo; Karin Lambrecht – Entre nós uma passage (through Febraury 10, 2019), and in 2017 Nem eu, Nem tu: Nós, a solo exhibiton at Espaço Cultural Santander in her hometown of Porto Alegre. Since 2017 she has been based in Broadstairs, Kent, UK. Her works are included in the collections of the Instituto Figueiredo Ferraz, Ribeirão Preto, Brazil; the Pinacoteca do Estado de São Paulo, São Paulo, Brazil; and the Instituto Itaú Cultural, São Paulo, Brazil, among others.

Since the 1980s, when she came to prominence in her native Brazil as a part of the “80s Generation”, Cristina Canale has been combining abstraction and representation in her mixed-media paintings on canvas, exploring, over decades of evolving work, the history of painting and its continuing development. Her early work is muscular, washed in dark hues and filled with bold lines and impasto passages of paint. In the mid-1990s, she moved to Germany to study at the Düsseldorf Academy of Arts, where she began to lighten her color palette and soften her approach. Her current works reveal influences of Fauvism, Post-Impressionism, and Neo-Expressionism, while their subjects—landscapes, figures, domestic scenes, dogs, and cats—recall pre- and early-Modern themes. In all of her work, Canale merges the literal and the lyrical, celebrating the malleability and magic of her medium. Solo exhibitions include: Cristina Canale: Zwischen den Welten, Kunstforum Markert Gruppe, Hamburg, Germany (2015); Entremundos, Paço Imperial, Rio de Janeiro, Brazil (2014); Arredores e Rastros, Museu de Arte Moderna do Rio de Janeiro (MAM Rio), Rio de Janeiro, Brazil (2010); and Cristina Canale,Instituto Tomie Ohtake, São Paulo/SP, Brazil (2007). She participated in the 21st Bienal de São Paulo (1991), in which she was awarded with the Prêmio Governador do Estado [Governor State Prize]. Her works are in the collections of Museu de Arte Moderna do Rio de Janeiro (MAM Rio), Rio de Janeiro, Brazil; Coleção João Sattamini – Museu de Arte Contemporânea de Niterói (MAC-Niterói), Niterói, Brazil; Instituto Itaú Cultural, São Paulo, Brazil; Museu de Arte Contemporânea da Universidade de São Paulo (MAC-USP), São Paulo, Brazil; and Pinacoteca do Estado de São Paulo, São Paulo, Brazil.