The Show That Never Was

The Show That Never Was

Setting up an exhibition, budgeting production, the
exhibition as a project during uncertain times, deadlines,
stress, specialized art transport. Exhibitions for private
online tours, the art show as an emergency, the urgency
of an art show now.

The Show That Never Was focuses on the notion of the exhibition art-space and its network of collective efforts, desires and hopes, setbacks and ideals that it emerges from. The works of artists Matei Bejenaru, Oana Coșug, Larisa Crunțeanu, Sebastian Hosu, Adelina Ivan, Aurora Király, Iosif Király, Zoltán Béla allow a view in the liminal space between the artistic laboratory and existing critical statements of the art scene. The exhibition unveils the artistic process, or otherwise revisits earlier works turning a mirror inwards, to the limitations and possibilities of an art-space. 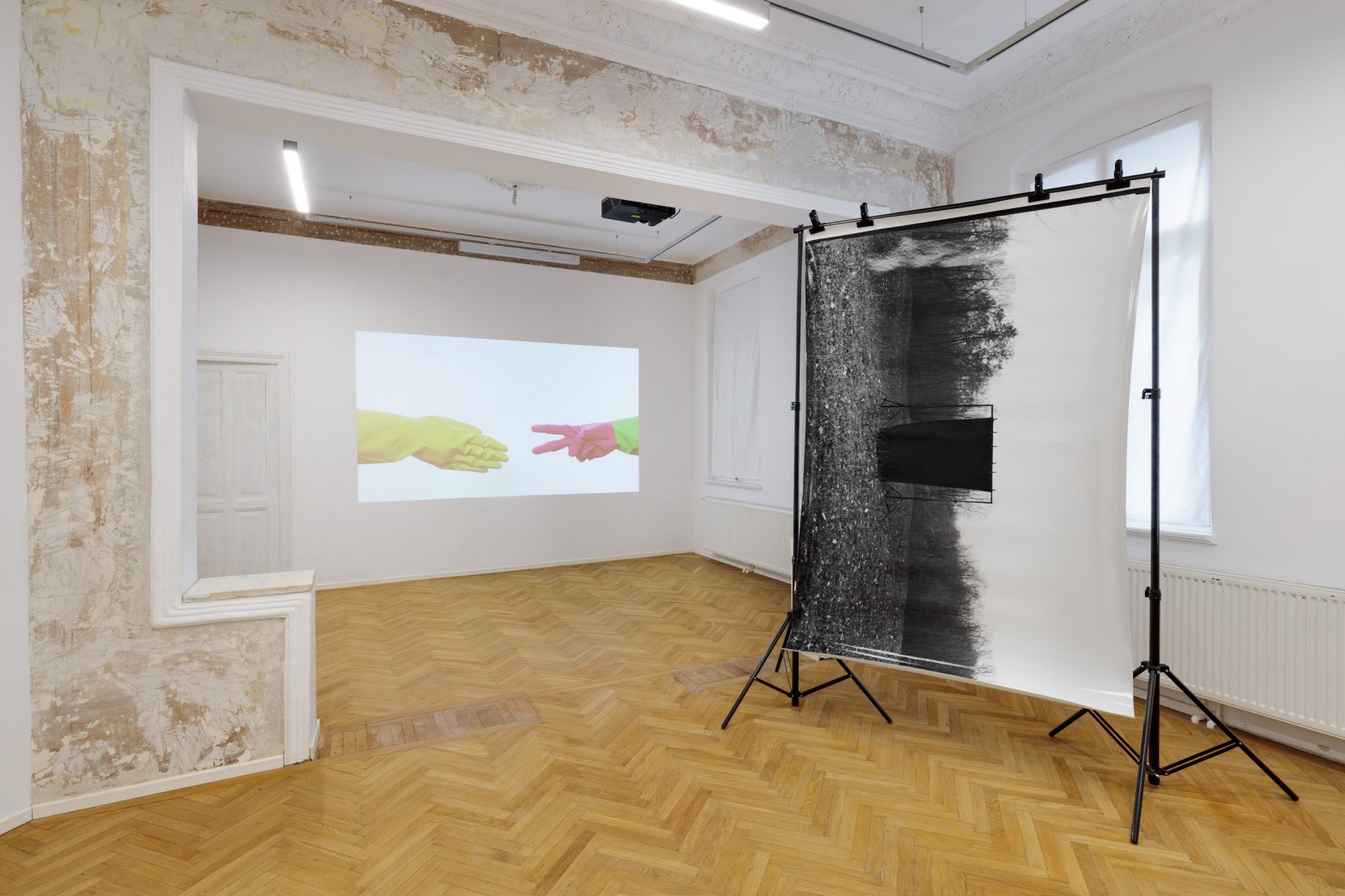 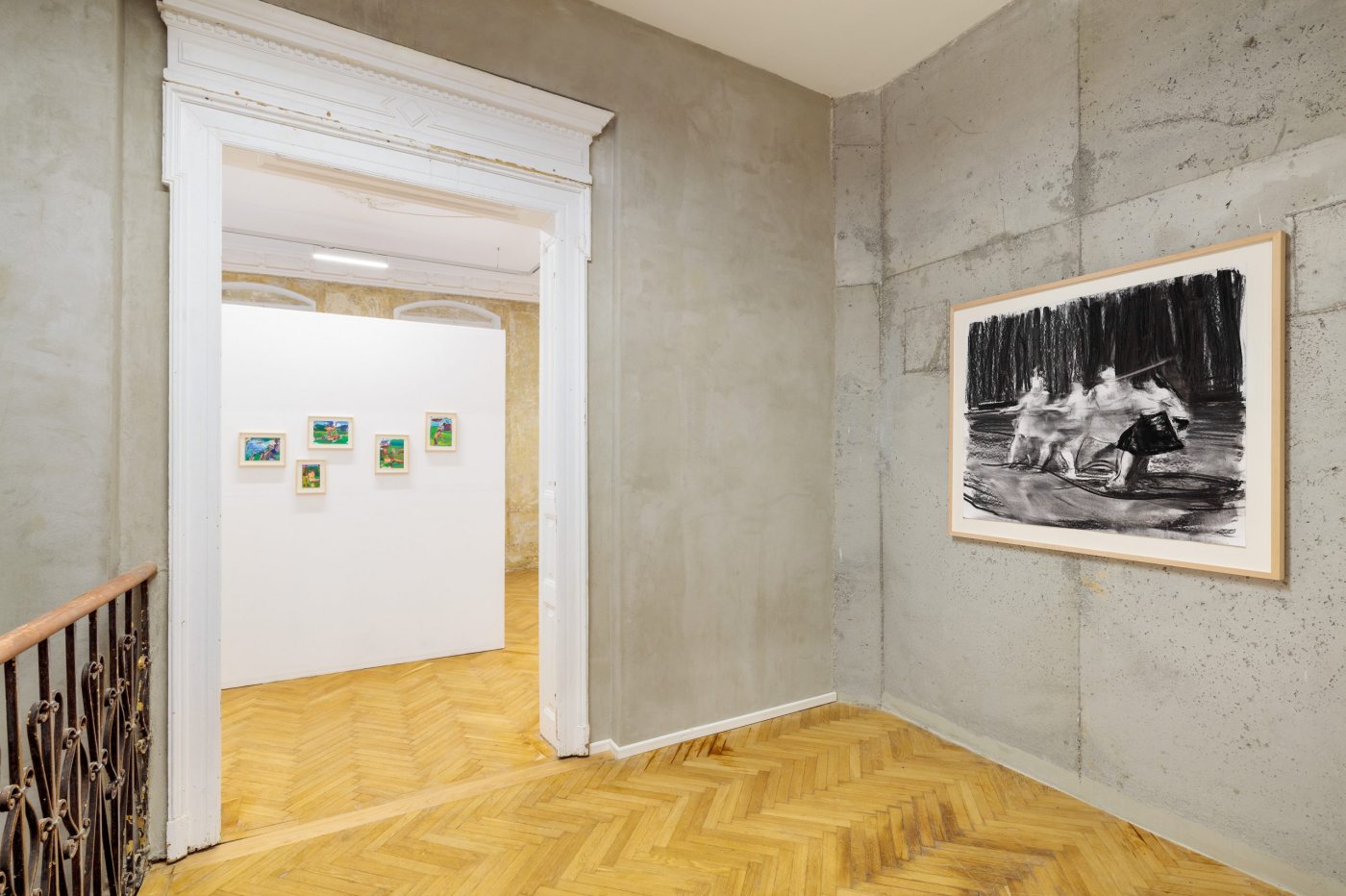 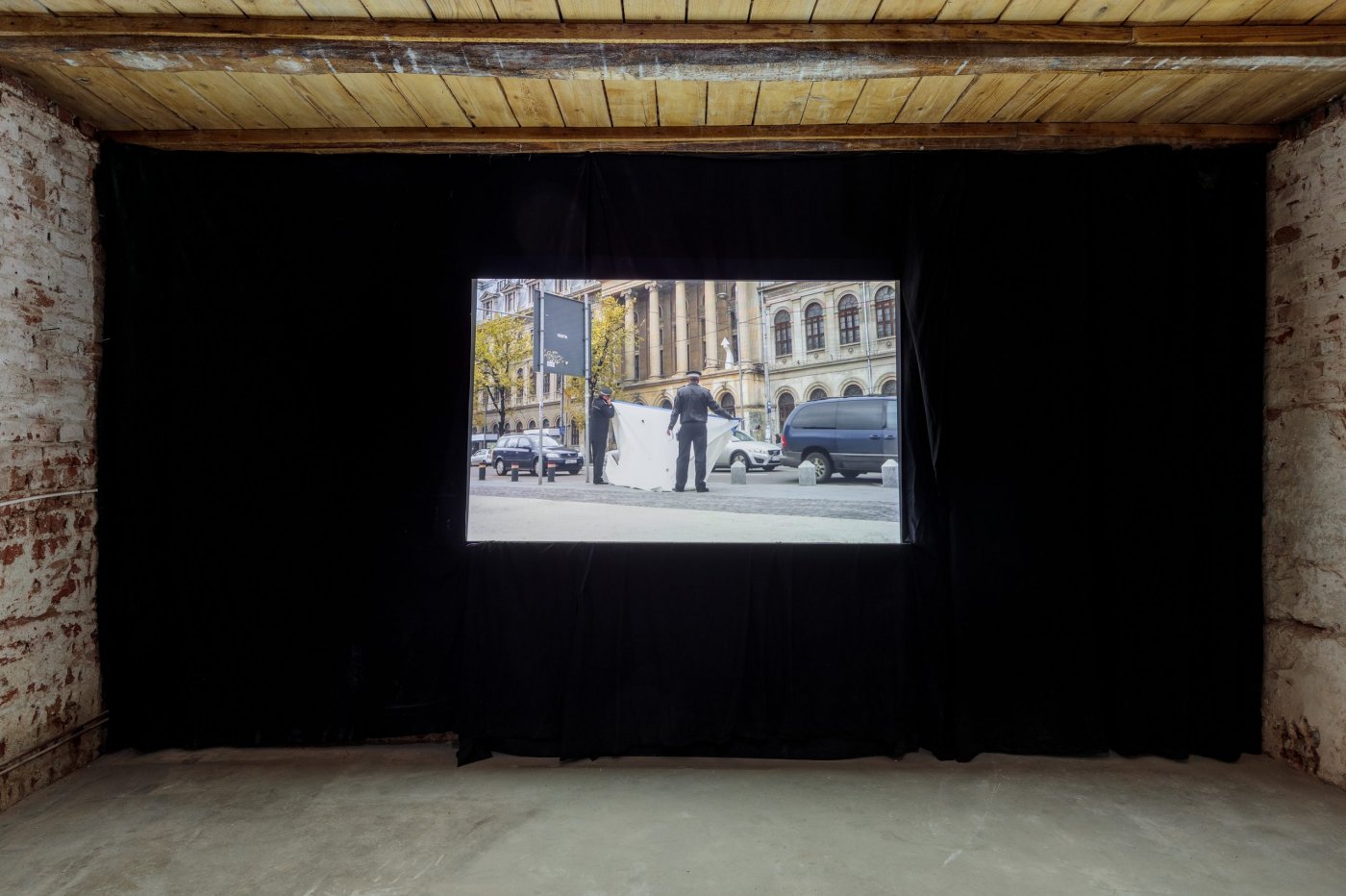 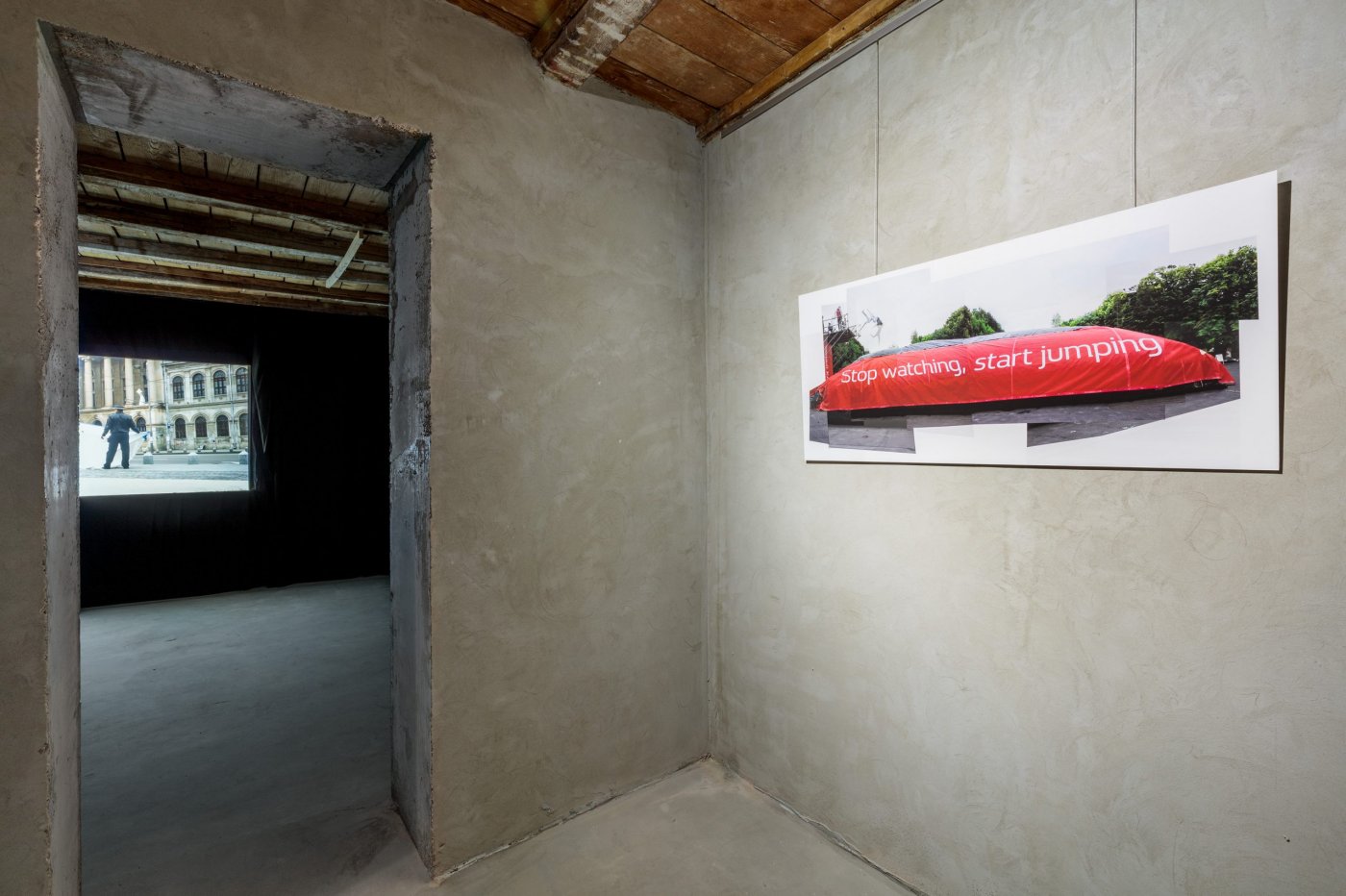 Whereas Matei Bejenaru shows us the inner workings of his artistic laboratory with the photographical work ABYSS (2020) in progress, Oana Coșug takes a more intimate look within the state of mind of the artist isolated in her studio. Zoltán Béla exposes the pressure to produce new works while the game of chance, the competition, the power-relation within the art-scene reverberates on the large screening shown by Larisa Crunțeanu in the work A Story with 255 Possible Parts (2017). In response, Aurora Király’s TALE (2013) series of acrylic on paper drawings map out episodes of stress and anxiety with text overlayed as processed trauma through storytelling. Adelina Ivan reflects on the artistic process of sketch-to-work through drawings and erasure poetry texts, leading to the simultaneous making and breaking, an implicit self-annihilation and rebuilding that takes place in the studio. Evoking the same Deleuzian concept of differentiation through repetition, Sebastian Hosu photographs his own works and then paints over the images with oil and charcoal, conceptualizing the relation between reality and representation in the series Reinventing my pictures (2020). On the second floor of the exhibition, Iosif Király’s video Blowin’ In The Wind (2014) relates perfectly to the idea of a show that never is/was. Making the leap between artistic intent and reality, an unintended performance takes place at University Square in Bucharest…

Unravelling the process of creating an art-show, we reflect on what it means to be an exhibition-maker in the current social and economic climate, notwithstanding the absurd and impossible challenges that can sometimes only be met with humour and dare.

The gallery space – a playground / a space of both escapism and confrontation / a space of permutations and chance.

*OANA COȘUG (b. 1979) lives and works in Brussels, Belgium. She studied painting at the National University of Arts in Bucharest and then she decided to continue her studies in Brussels. In 2009 she obtained her master degree in Theory and Practice of Art at Académie Royale des Beaux-Arts in the Belgian capital. in 2012 she was awarded the First Prize within the International Biennial of Contemporary Drawing Namur, Belgium (ex aequo: Oana Coşug and Anya Belyat-Giunta) and was selected for CanvasCollectie/ The RTBF Collection in BOZAR. Most recently, her works were selected for the S.M.A.K show ”Drawing in Lockdown”.

*LARISA CRUNȚEANU (b. 1986) The artist’s practice as performer, video artist and sound collector moves from reality to fiction in an endless conversation with the viewer. Larisa Crunțeanu’s works create contexts in which facts and memories are reactivated, encouraging a shared effort and the emergence of new practices. Many of her projects reflect on the notion of collaboration and the ideas existing behind objects and stories. Her works were shown in important institutions such as the National Museum of Contemporary Art in Bucharest, SAVVY Berlin, Zacheta Project Room Warsaw, RKI Berlin, Museu de Arte Brasieira – MAB FAAP, São Paulo.

*SEBASTIAN HOSU (b. 1988) was born in Satu Mare in 1988 and lives and works in Leipzig. He studied at the Art and Design University(UAD) in Cluj-Napocaand at the Albertina Academy of Fine Arts in Turin. His Master’s degree in painting at the RoyalAcademy of Fine Arts in Liège (2016). Hosu’s works have been shown in numerous exhibitions, including the solo exhibitions at Friends of Current Art Association, Zwickau; Museum of Fine Arts (MdbK) in Leipzig; Rutger Brandt Gallery in Amsterdam. He has received various awards, including the Elisabeth Greenshields Award, Canada (2019 and 2017) and first prize at ArtWalk–Park 2015 in Leipzig. His works are included in the Hildebrand Collection, the collections of the MdbK in Leipzig and the Technical University in Darmstadt, as well as the Dresden State Art Collections.

*ADELINA IVAN (b.1971) is a visual artist with a conceptual approach to textile art, recorded performance, video and installation, and a growing interest in drawing. The basis of her artistic practice is a social and cultural critique of the conventions that have distorted an otherwise infinite realm of possibilities of enacting femininity. Force and frailty are put into balance, exposure and protection, transiency and permanence, illustrating the idea of rhythm and repetitive movement. Adelina Ivan studied at Bucharest University of Arts. Lives and works in Bucharest.She has shown at Litost Gallery Prague, NADA New York Open; Musée de la Chasse et de la Nature Paris; Kunsthalle Bega; Art screening Festival Tokio; The National Museum of Contemporary Art; Black and White Biennial Satu Mare Museum of Art; tranzit.ro Bucharest, Istanbul Design Biennial.

*AURORA KIRÁLY (b. 1970) works with photography, installations, drawing and textiles, pursuing the stories at the intersection of the public and the private, especially in regards to gender roles and politics of inclusion and representation on the contemporary art scene. Her works were part of numeorous exhibitions in artspaces such as The National Museum of Contemporary Art, The Futura Project show OrienT at Kim?, BOZAR and Galeria Sztuki in Krakow, Leipzig Project Space with Anca Poterasu Gallery, The Art Encounters Contemporary Art Biennial, Art Gallery Sofia, Brukenthal Museum in Sibiu,The Hungarian Museum of Photography.

*IOSIF KIRÁLY (b. 1957) is a Romanian visual artist, architect, and educator. His work investigates the relationship between perception, time, synchronicity and memory through photography, installation-art, drawing and more recently, video. He has initiated, coordinated, and, together with architects, visual artists, and anthropologists, participated in research projects related to the changes having occurred in post-communist Romania: D-Platform, RO-Archive, Triaj, Tinseltown. During the 1980s, Iosif Király became active in the mail art network, an international underground movement established by Fluxus. After 1989, he exhibited both individually and within the subREAL group.

*ZOLTAN BÉLA (b. 1977) graduated from the University of Arts and Design in Cluj becoming best known for his hyper- realistic paintings with influences from the Cluj School of painting. Several years ago, he took the decision to shift his artistic practice towards experimentation, scrutinizing the limits between figurative and abstract painting, object making and installation. A collector of images and objects, Zoltan Béla recuperates, reinterprets, transforms through paintings and installation disregarded and overlooked day-to-day personal histories. He exhibited in events and institutions such as The National Museum of Contemporary Art, Anexa in Bucharest, at the Black and White Biennial at the Art Museum in Satu Mare, at Bistrița Art Museum, Kriterion Galeria in Miercurea Ciuc, at Colonia Pictorilor, Baia Mare artistic centre at the Romanian Cultural Institute in Lisbon, The National Romanian Library, the 4th Moscow Biennial of Contemporary Art Russia.

Courtesy of the artists and Anca Poterașu Gallery, Bucharest