The Landscape - From Arcadia to the Urban

The Landscape - From Arcadia to the Urban

gallery rosenfeld presents its second exhibition dedicated to the landscape, titled ‘The Landscape – From Arcadia to the Urban’. The exhibition reflects on how the seventeenth and eighteenth century vision of a perfect idyllic natural world radically altered with the advent of the industrial revolution and move of people from the countryside to the cities was reflected in changing attitudes to what constituted a landscape. The exhibition features seven artists: Inna Artemova, Armin Boehm, Piero Pizzi Cannella, Lu Chao, Leonardo Drew, Levi van Veluw and Bogdan Vladuta. In addition, the gallery is exhibiting two old masters one of which encapsulates an idea of ‘Arcadia’, whilst the other illustrates a very different idea of a pure landscape. 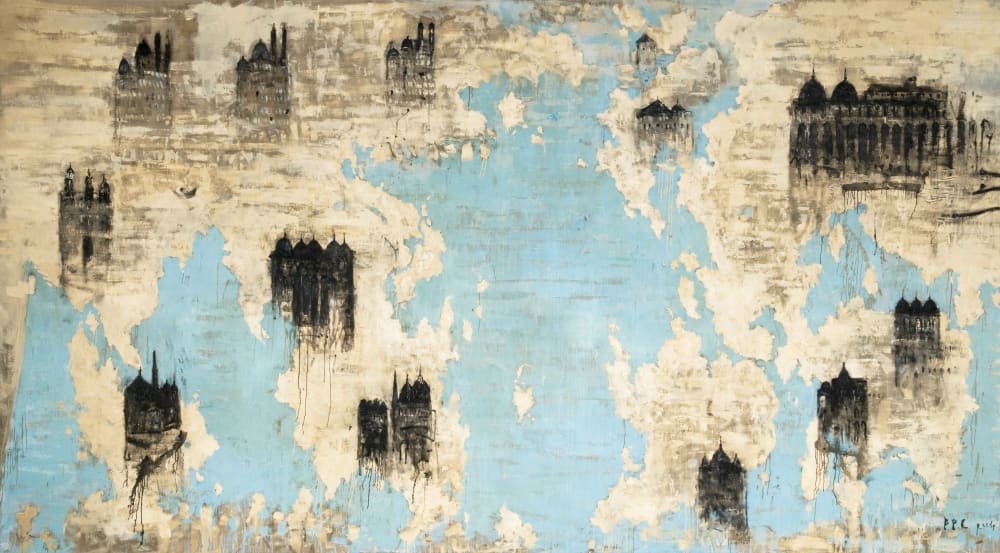 In the sixteenth century painting ‘The Baptism of Christ’ the real protagonist is the idealised landscape all around the figures and the magical light which bathes the scene. The work was painted in Italy in the second half of the sixteenth century and is attributed to Giovanni-Andrea Donducci called Il Mastelletta. (1575-1655), and is clearly influenced by the Mannerist artists who were called to France by Francois I to create the so- called ‘School of Fontainebleau’. The other work is a scene of a tempest by the Italian artist Antonio Maria Marini (Venice 1668-1724).

A very large painting by the Italian contemporary painter Piero Pizzi Cannella is dominated by water and a variety of ancient cathedrals dotted around an approximate map of the world, as a testimony to human genius and civilisation.

Armin Boehm’s work entitled ‘Radio Maria’ features a lone building accompanied by three telecommunication masts, surrounded by a mass of land on an extraordinarily rich starry night. The title of the work refers to the radio station of the Vatican.

The Chinese artist Lu Chao’s painting of a huge tree presents what appears to be a purely nature filled view. However, on closer inspection, one can see a host of small buildings and many little people swarming around the area surrounding the base of the tree as if the tree with its majestic size appears like a god-like figure overseeing his universe.

Two wall sculptures by the American artist Leonardo Drew will also be featured. ‘28i‘ features part of the bark of a tree alongside other discarded pieces of wood thereby creating a highly melancholic ‘Wunderkammer’ where the pieces of wood become a testimony to a dying world. The second work ‘137d’ is an assemblage of wooden and aluminium pieces which resemble an aerial view of a city with the group of skyscrapers jutting out into the air

The Dutch artist Levi van Veluw will be exhibiting two paintings; a very large futuristic landscape vividly drawn in charcoal and a much smaller work in colour which represents the construction of a rose window for a cathedral.

Inna Artemova’s large explosive canvases carry an echo of Tatlin’s ‘Monument to the Third International’ where he showcased the soviet vision for a new world. However, Artemova’s works are futuristic visions for our contemporary world. Superbly realised and executed, the very dynamic brushstrokes create a sense of movement so that when we look at the work it recalls the dynamism of the Italian ‘futurist’ movement from the early twentieth century.

The scene of a crumbling cityscape created by the Romanian artist Bogdan Vladuta is also predominantly in black and white with only hints of colour. However, the very vivid brushstrokes and use of dripping paint to augment the drama of the scene are also evident in Artemova’s paintings. Vladuta’s work is inspired by the crumbling of Ceausescu’s Romania and the communist world associated with it.

This evolution from a pure idealised landscape to a sprawling cityscape alongside the threat of industrial pollution and the pandemic, is resulting in a new desire to return to nature. As many areas of work in our contemporary society no longer require our physical presence at the place of work, people now have a far greater ability to choose where they want to build a life. As a result we are seeing a renewed exodus from the industrial cities of the world.