The Gallery of Everything

I am a missionary of Christ before I’m an artist.
Sister Gertrude Morgan (1973)

Photographed by Lee Friedlander, lionised by Andy Warhol, re-mixed by King Britt, the remarkable Sister Gertrude Morgan (née Gertrude Williams) was a rare and rarified figure in the aesthetic history of 20th century America: a confident female artist, whose visceral image-making went hand-in-hand with the saving of souls. 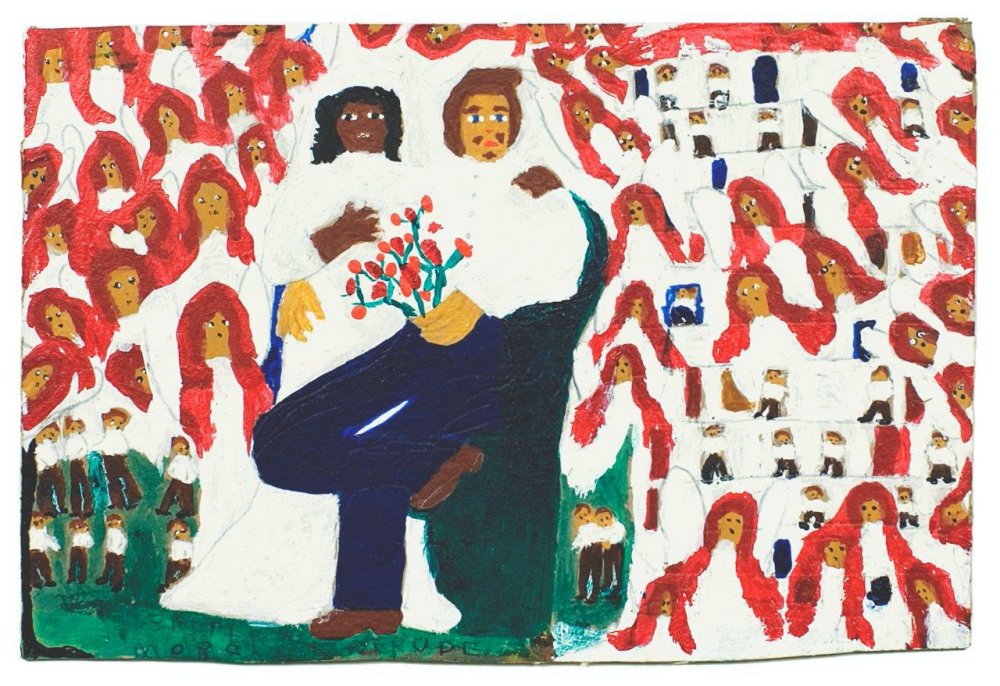 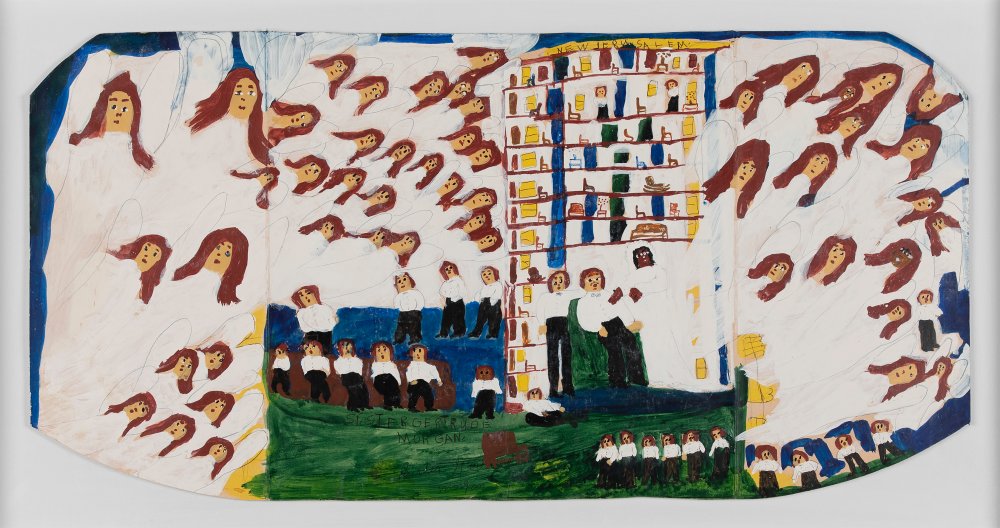 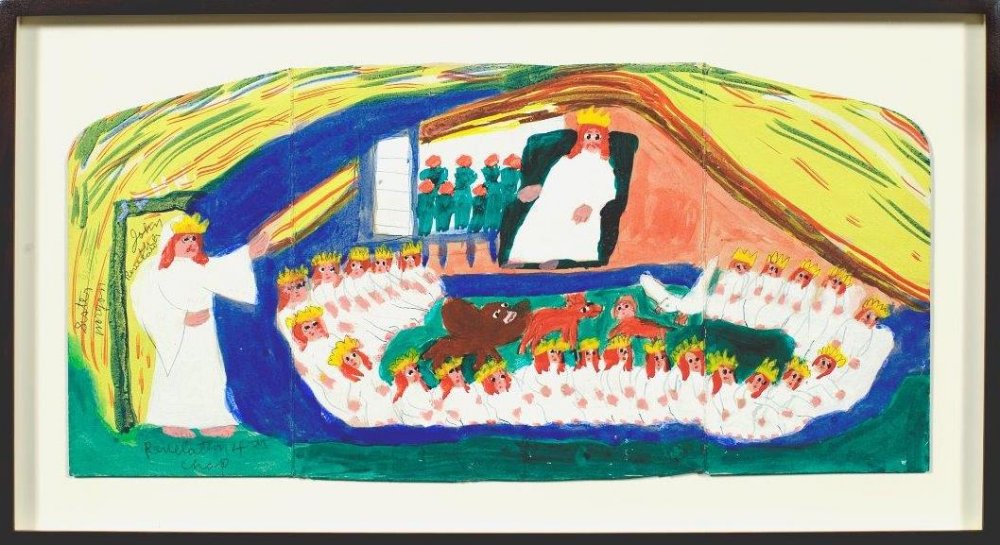 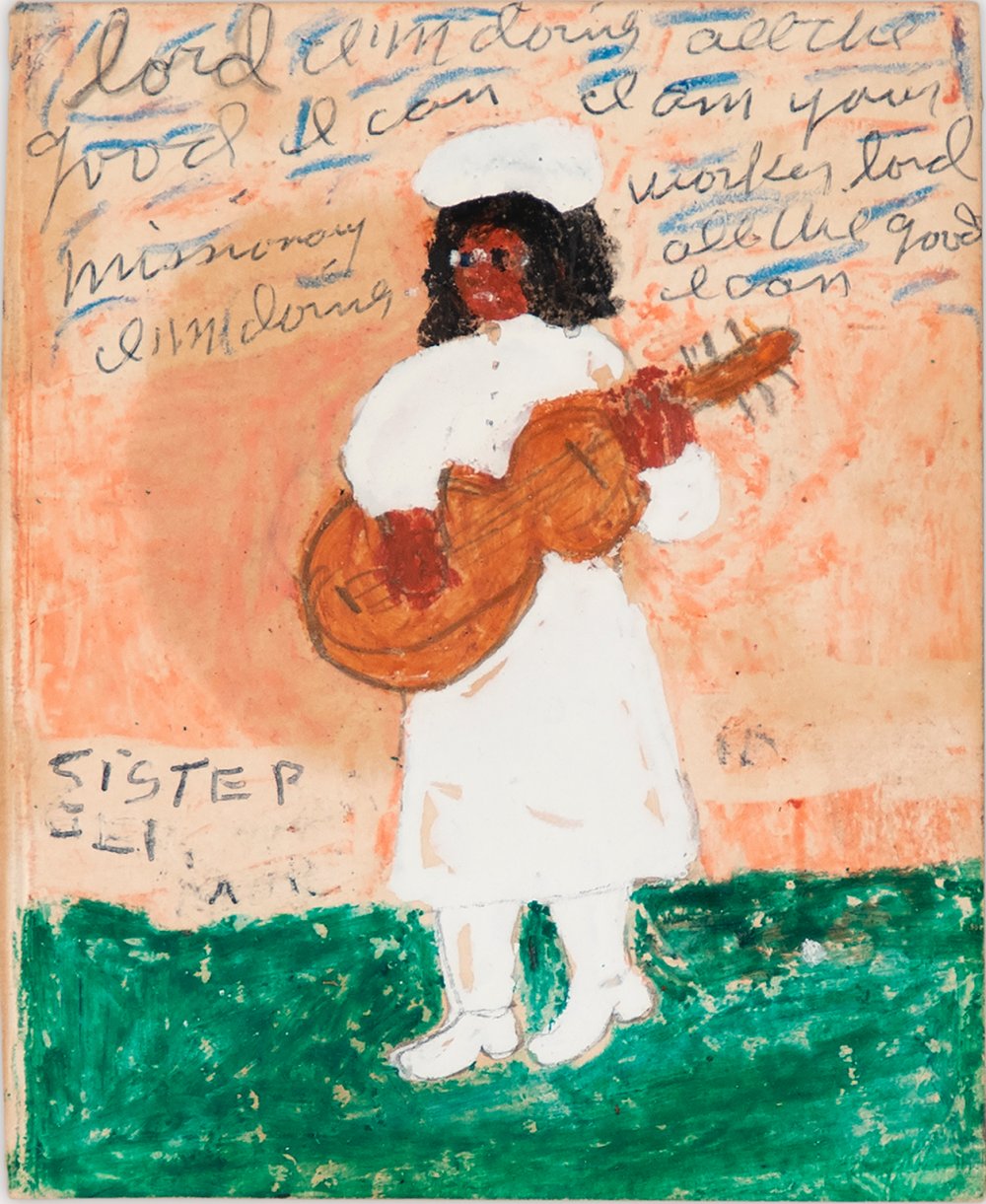 Sister Gertrude Morgan
Lord I am Doing All the Good I can, c. 1967

Born in 1900 in Lafayette, Alabama, Morgan was as modest as she was larger-than-life. Her New Orleans Gospel Mission was a spiritual home for believers and non-believers alike. For it was here that she proselytised and painted and rattled her tambourine, when she was not out singing, preaching and teaching Bible to neighbourhood strays.

These moments became the content of her legend. Morgan depicted the everyday alongside the divine, outputting her pictorial rhetoric onto any surface she could find. Scraps of card, window blinds, paper fans and serving trays carried her repertoire. They evoked a biographical other-worldly hybrid, where New Jerusalem resembled New Orleans, and where the good Sister’s marriage to Jesus, God or both, swirled among the heavenly bodies and elliptical texts.

Although the Black Arts Movement was peaking on the East Coast of America, Morgan remained remote from their community, separated by not only by geographical distance, but also by artistic intent. She was a local Louisiana hero, even a star: a stout, middle-aged, African-American lady, who was successfully painting – and exhibiting her painting – at a time when few peers dared even expose their material, let alone in the racist, misogynist and conservative South.

Often to be seen on the streets in her signature white pinafore, it was the performative nature of her practice which brought her to the attention of Larry Borenstein and Allen Jaffe. Working together, these high-octane stalwarts of the city brought Morgan’s work into dialogue with the wider arts community via Borenstein’s art gallery at Preservation Hall.

Morgan’s prolific output led to a fast uptake amongst the New Orleans arts community of the 1960s and 1970s, reaching New York via Andy Warhol’s Interview and a 1973 article by Rosemary Kent. Major exhibitions were to follow, including the Corcoran Gallery’s barrier-breaking Black Folk Art in America 1930-1980 (1982), which toured the US. Almost 40 years after her passing, a major retrospective curated by William Fagaly opened at New York’s American Folk Art Museum.

Today Sister Gertrude Morgan has been rediscovered by a younger generation of American and international curators. Her work was most recently featured in Outliers and the American Vanguard Art (2019), curated by Lynne Cooke and travelled from the National Gallery at the Smithsonian (Washington DC), to the High Museum (Atlanta) and LACMA (Los Angeles). Her emblematic song I Got a New World in My View (1970) was featured in the Martin Luther King Jr biopic, Selma (2014); and her classic Let’s Make a Record was reworked by DJ and producer King Britt in 2005.

Sister Gertrude was strong and frisky. She described to me how God came to her in a dream, and told her to stop playing the guitar and instead to illustrate the Bible. But God did not say anything about stopping playing the tambourine, so she continued with that.
Lee Friedlander, photographer (2009)