On public display by appointment from 15 June, The Artist’s Room invites you into the confines of an imagined artist’s personal space. Filled with drawings, etchings, photographs, furniture, plants and books, The Artist’s Room conjures up an atmosphere of contemplation and creativity, bringing together a large selection of works by twelve modern and contemporary artists, all of whom have been widely celebrated. 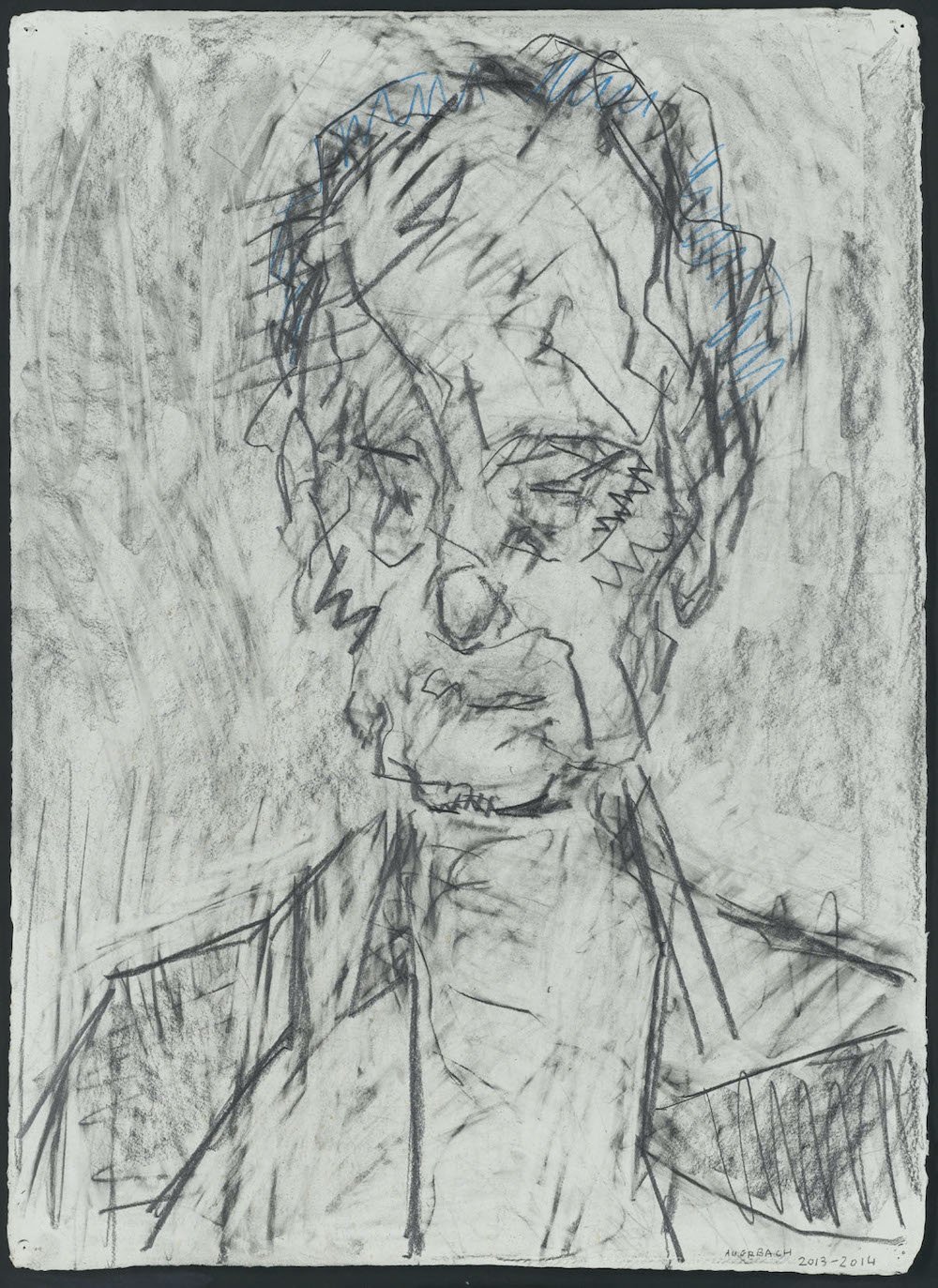 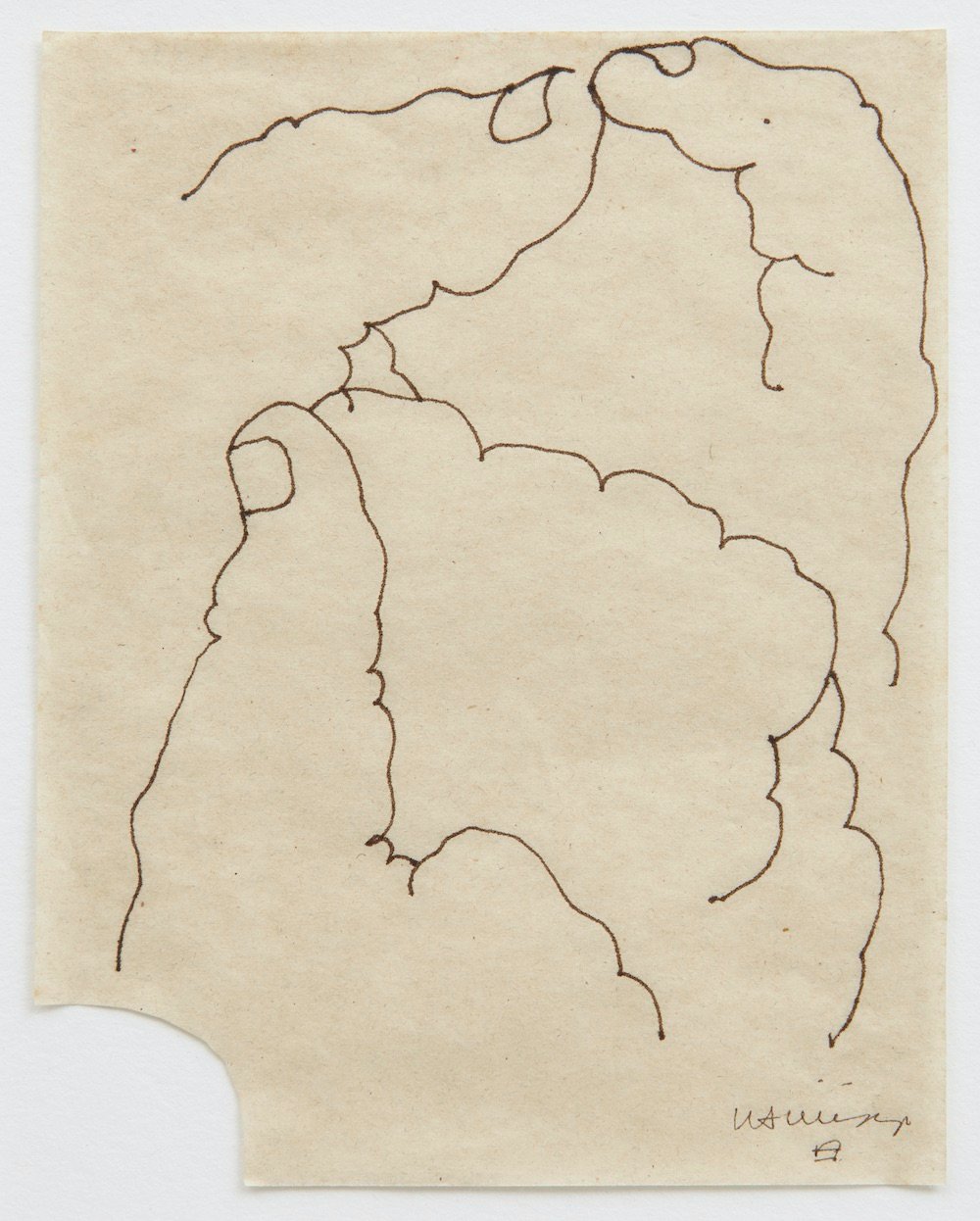 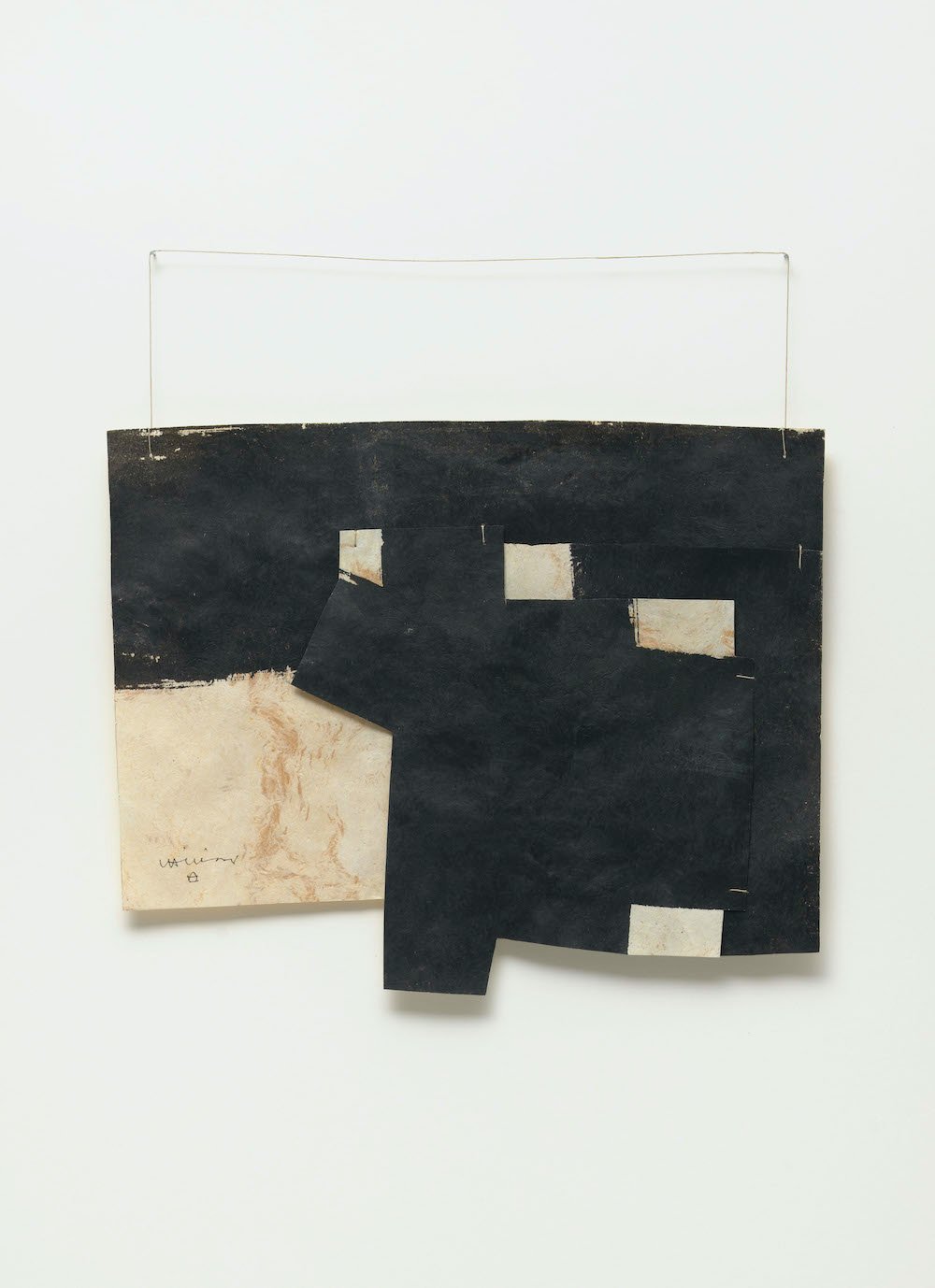 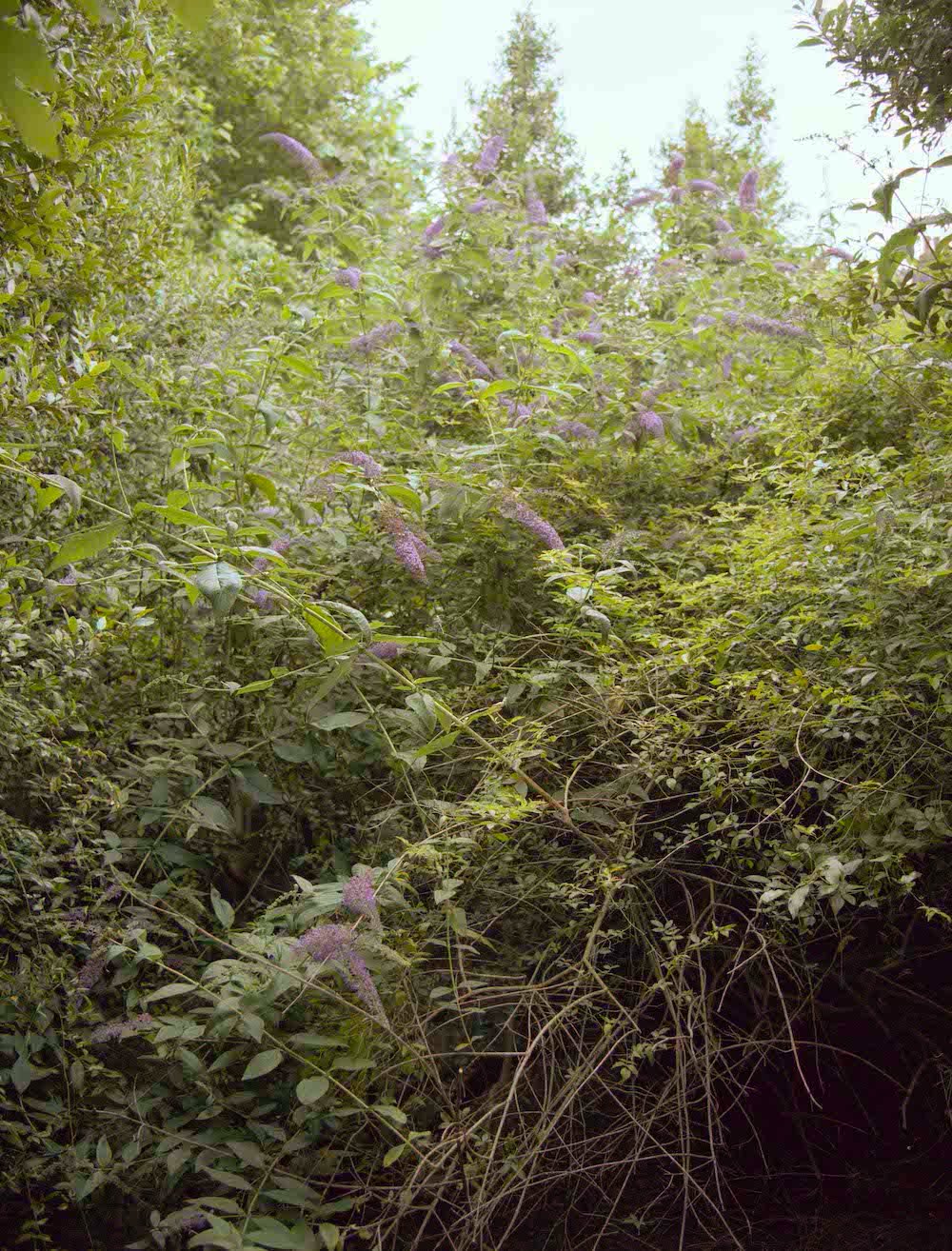 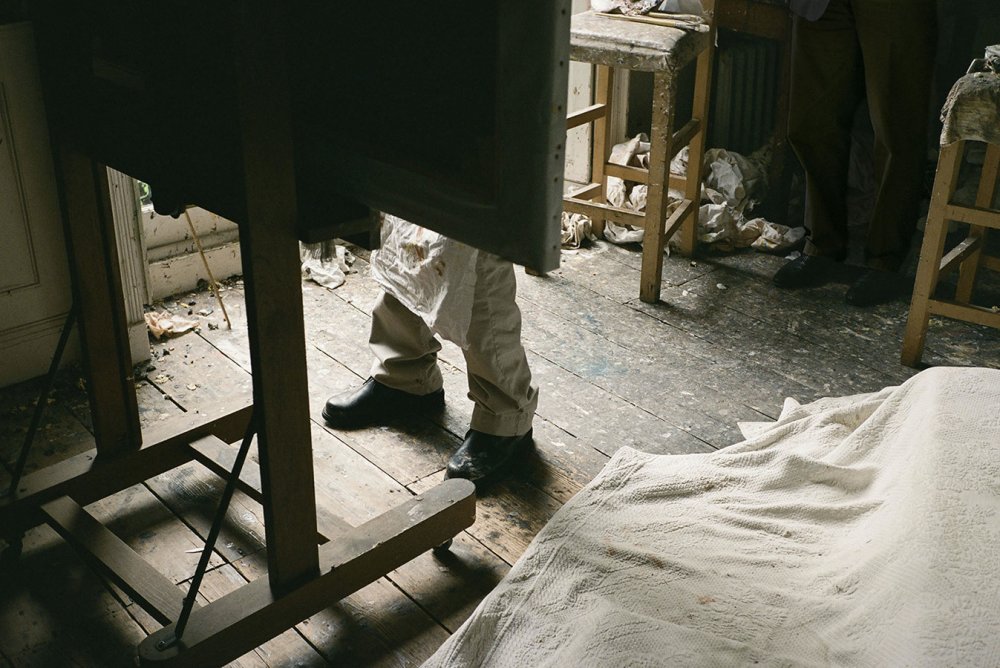 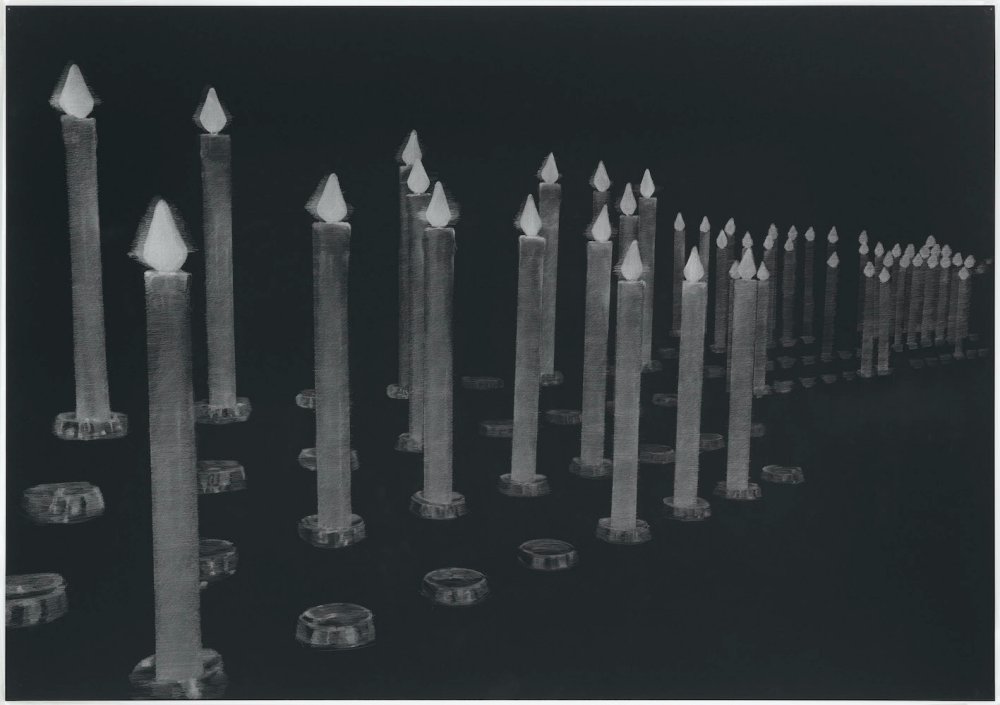 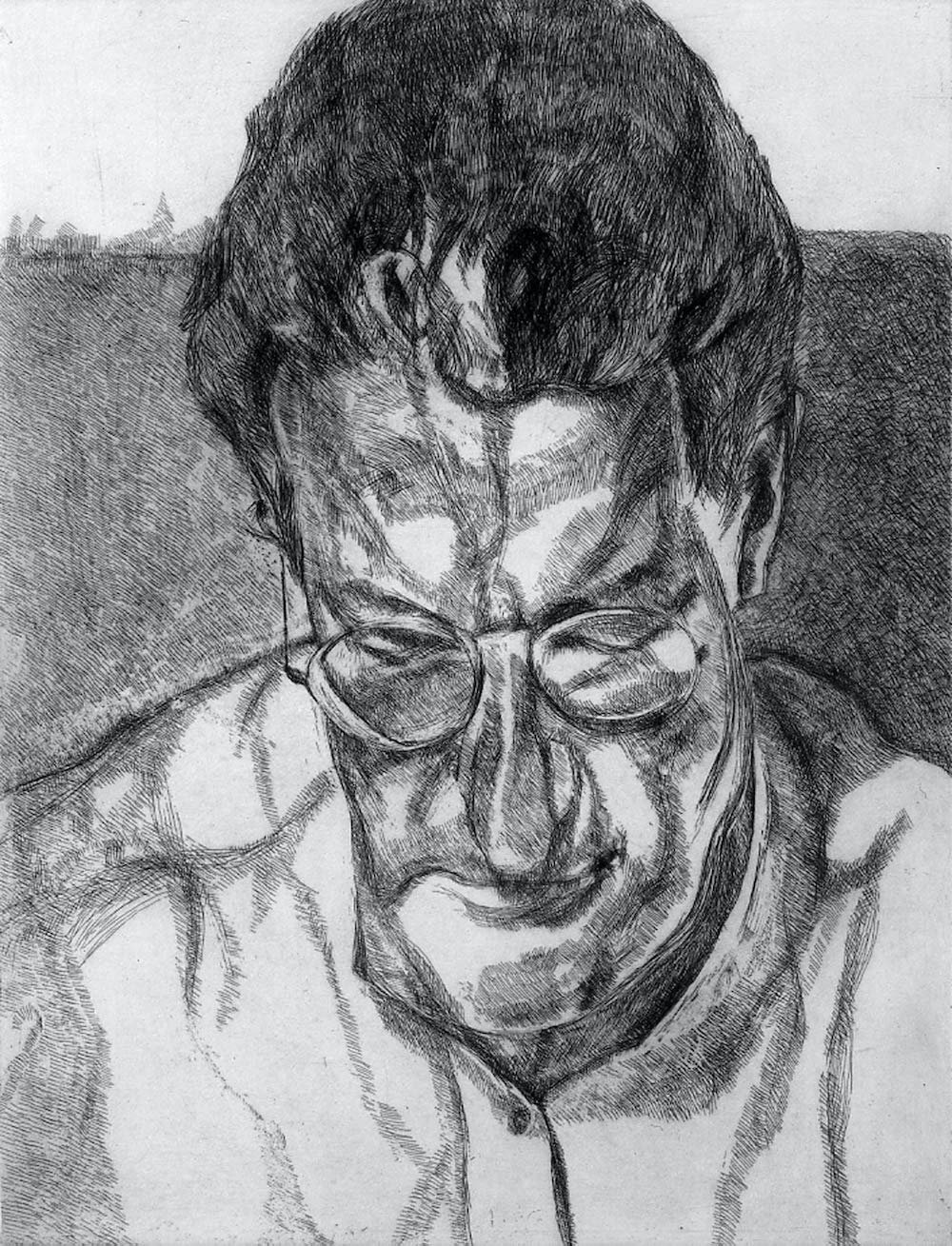 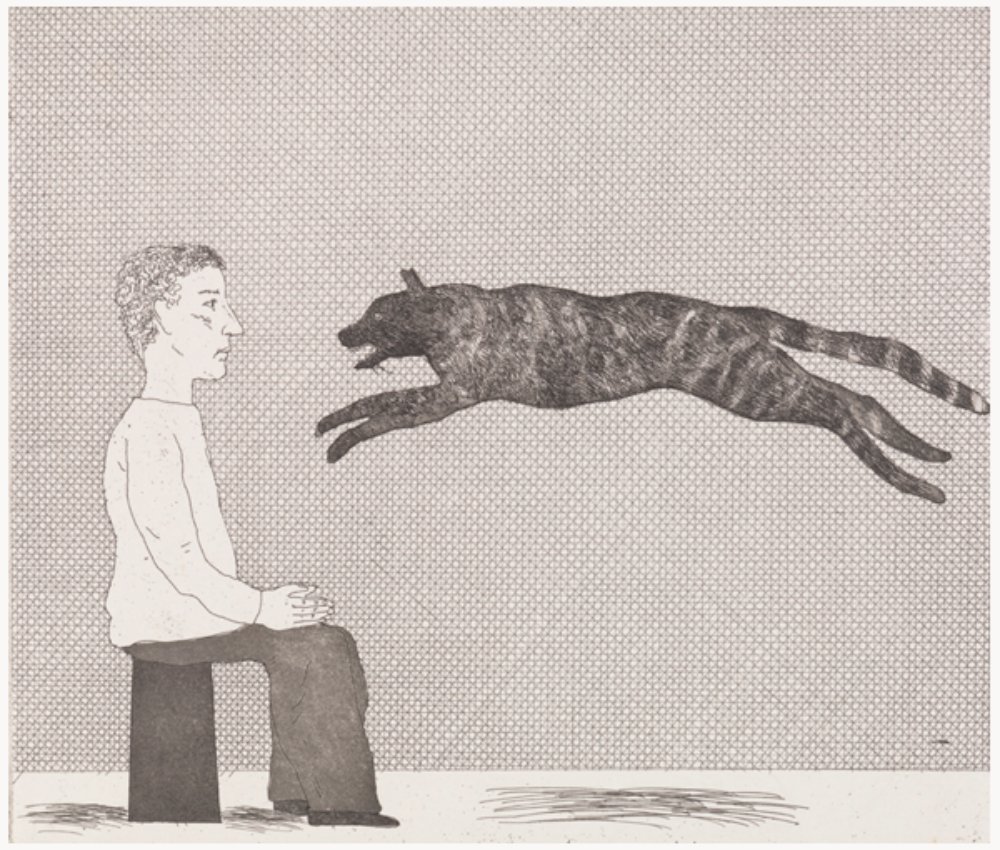 David Hockney
A Black Cat Leaping, from “Illustrations for Six Fairy Tales from the Brothers Grimm”, 1969 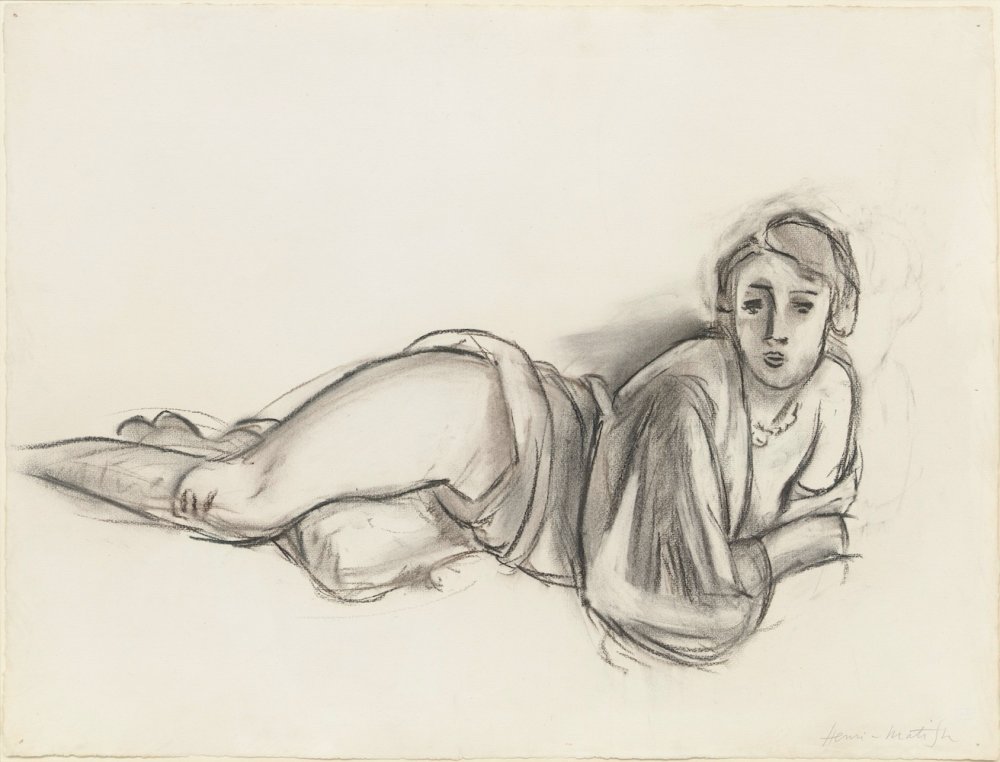 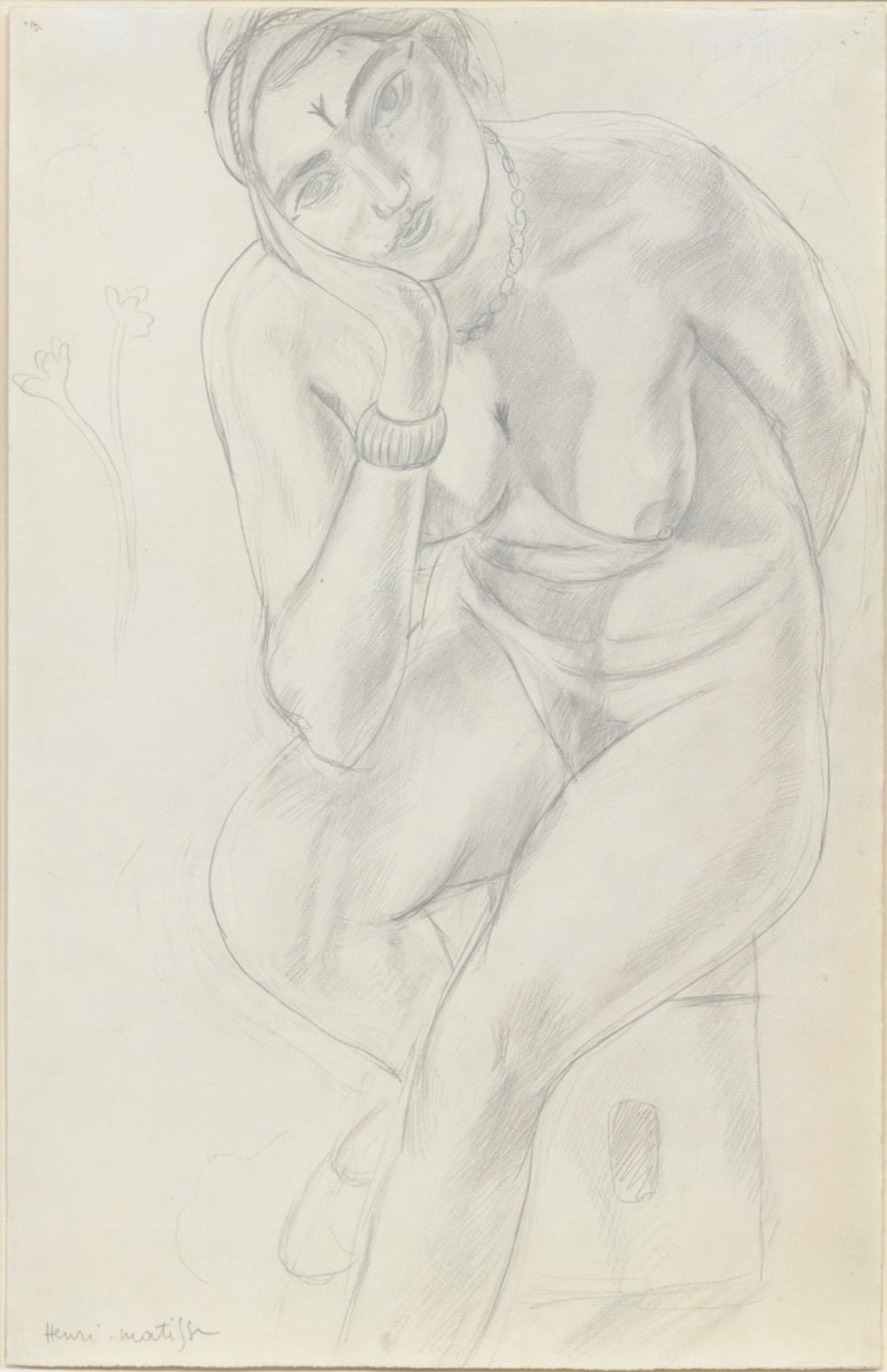 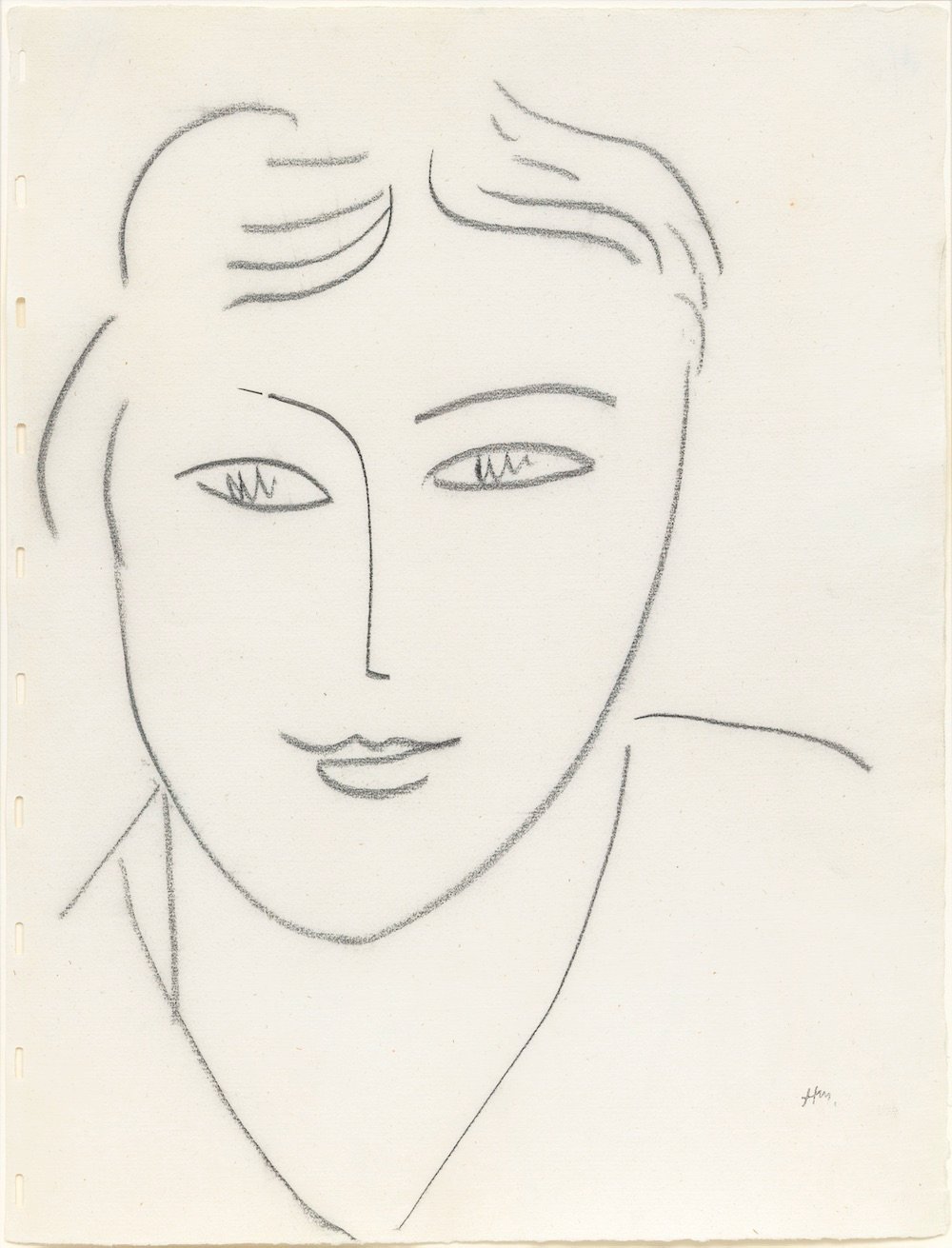 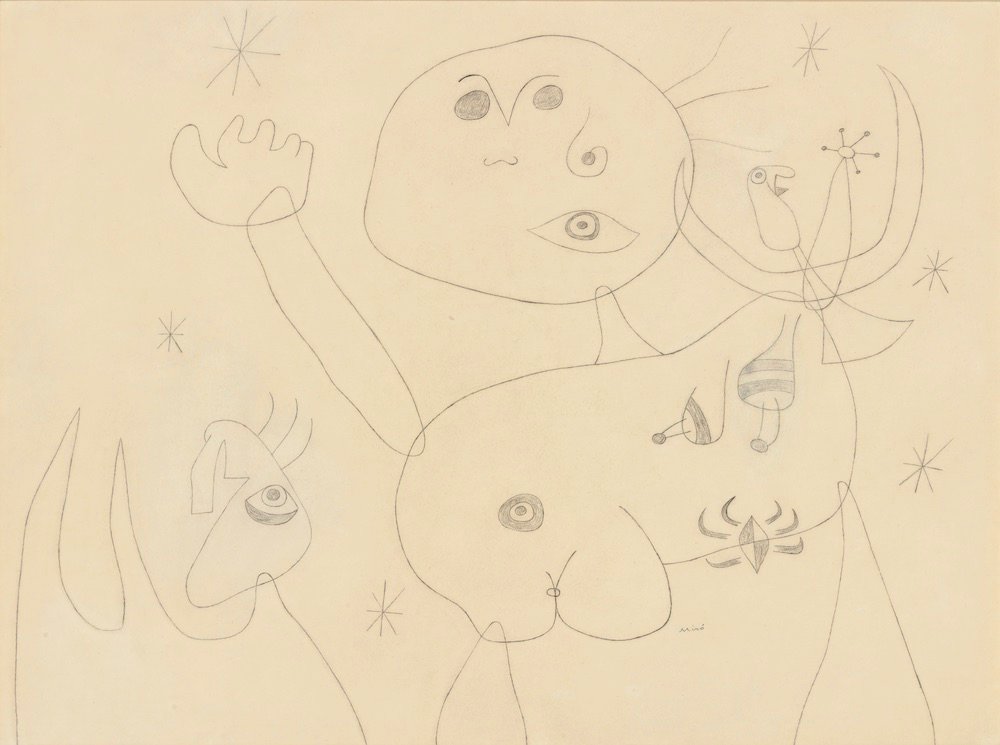 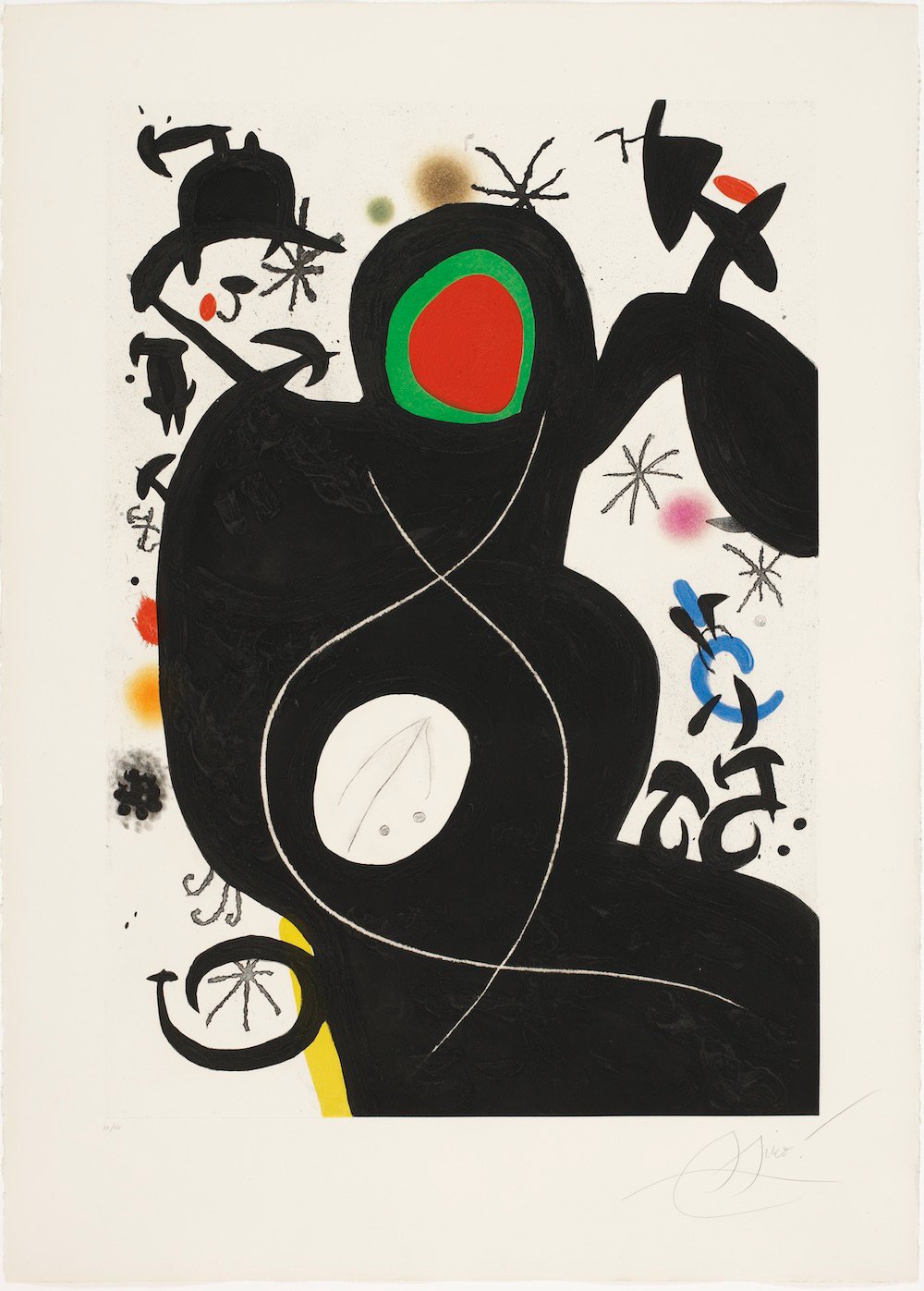 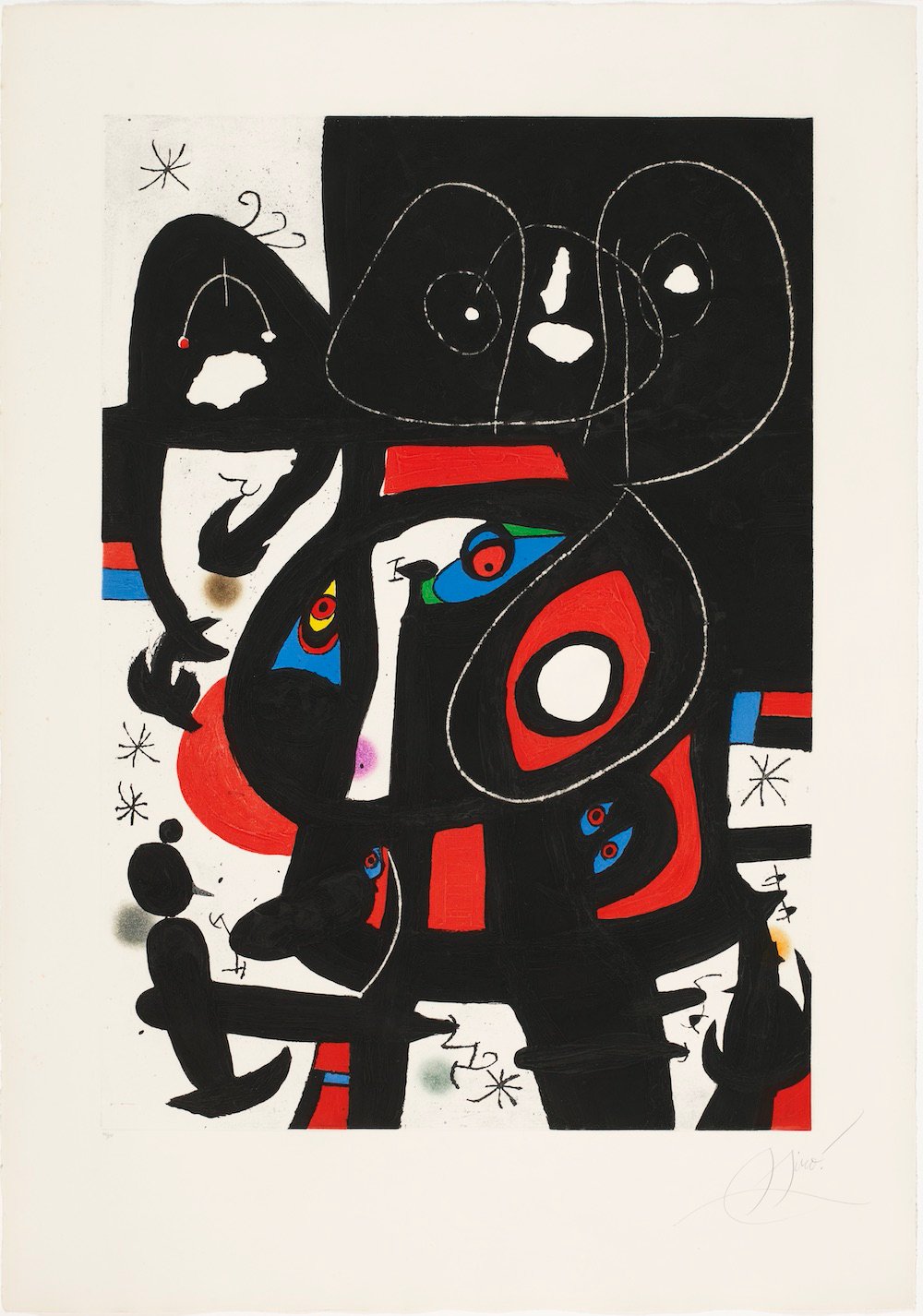 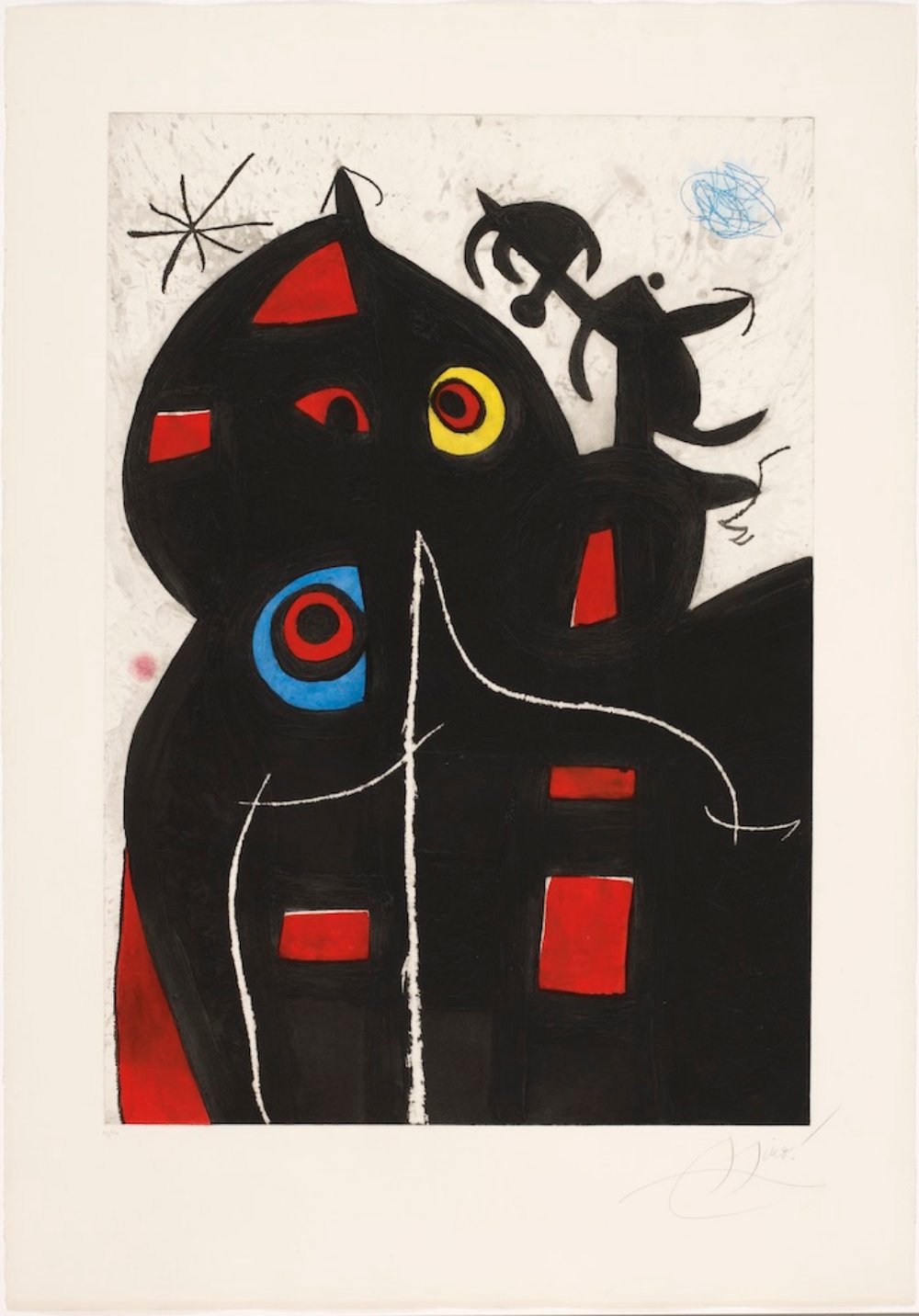 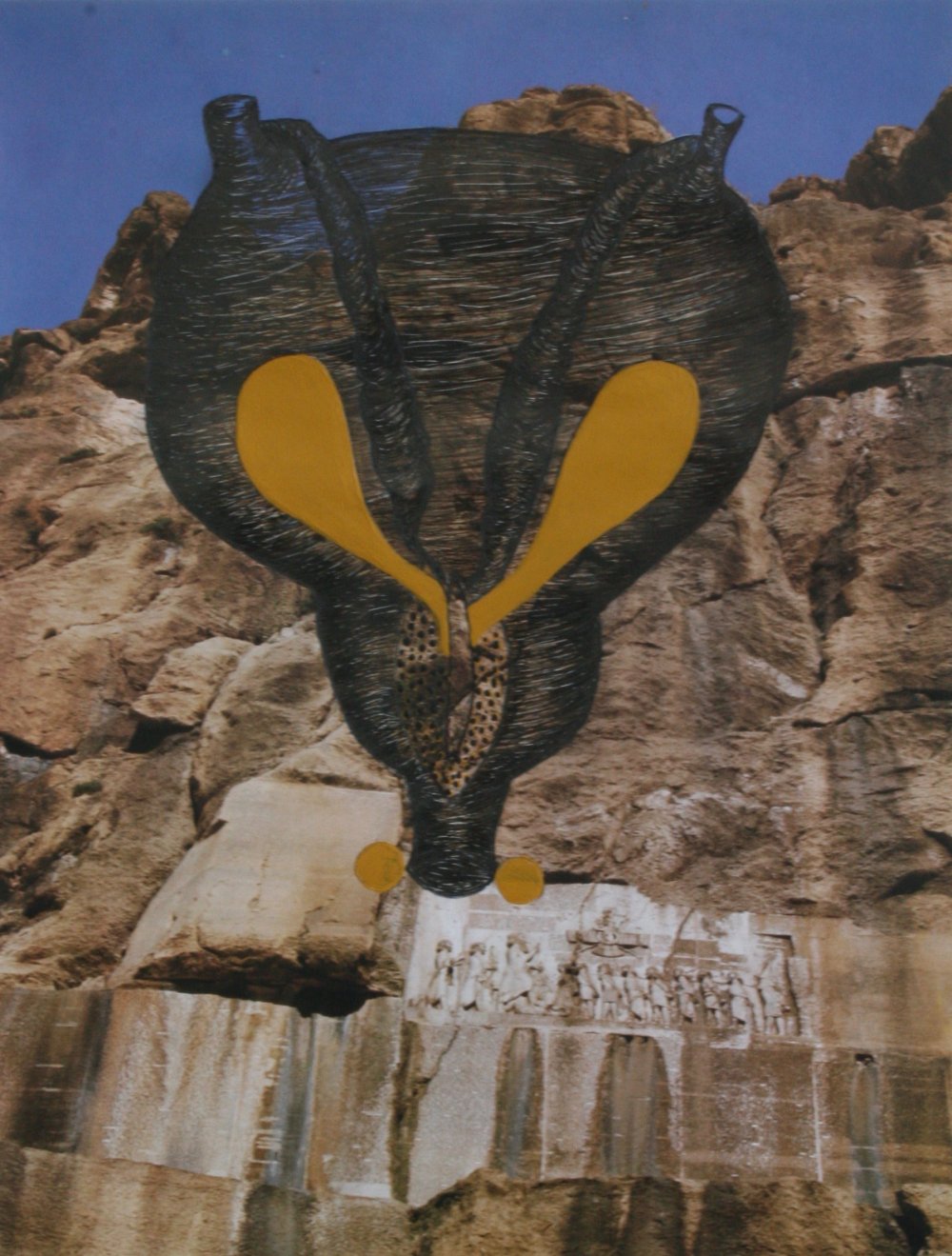 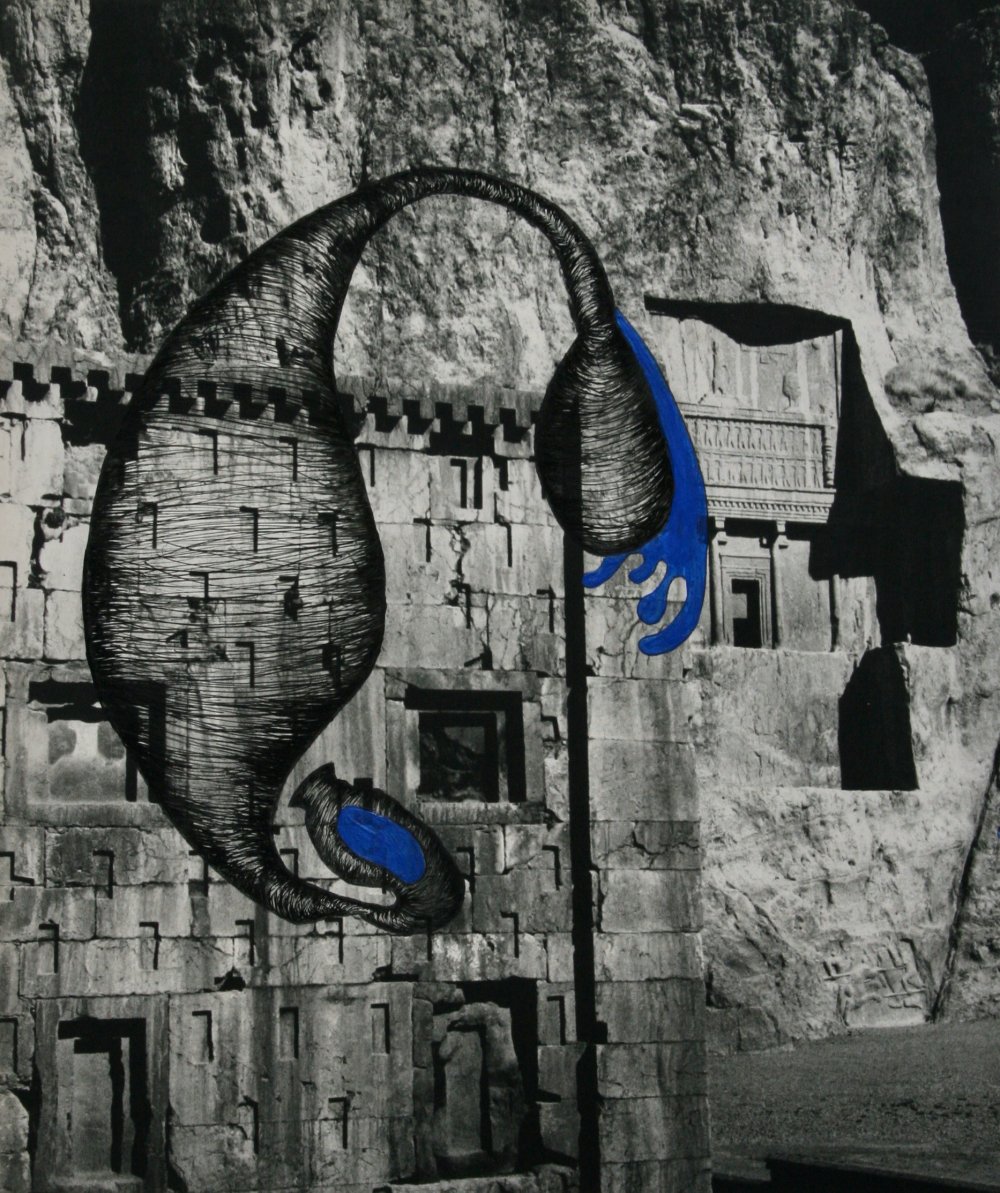 Pen and acrylic on cut out images from vintage books
29 x 24.5 cm 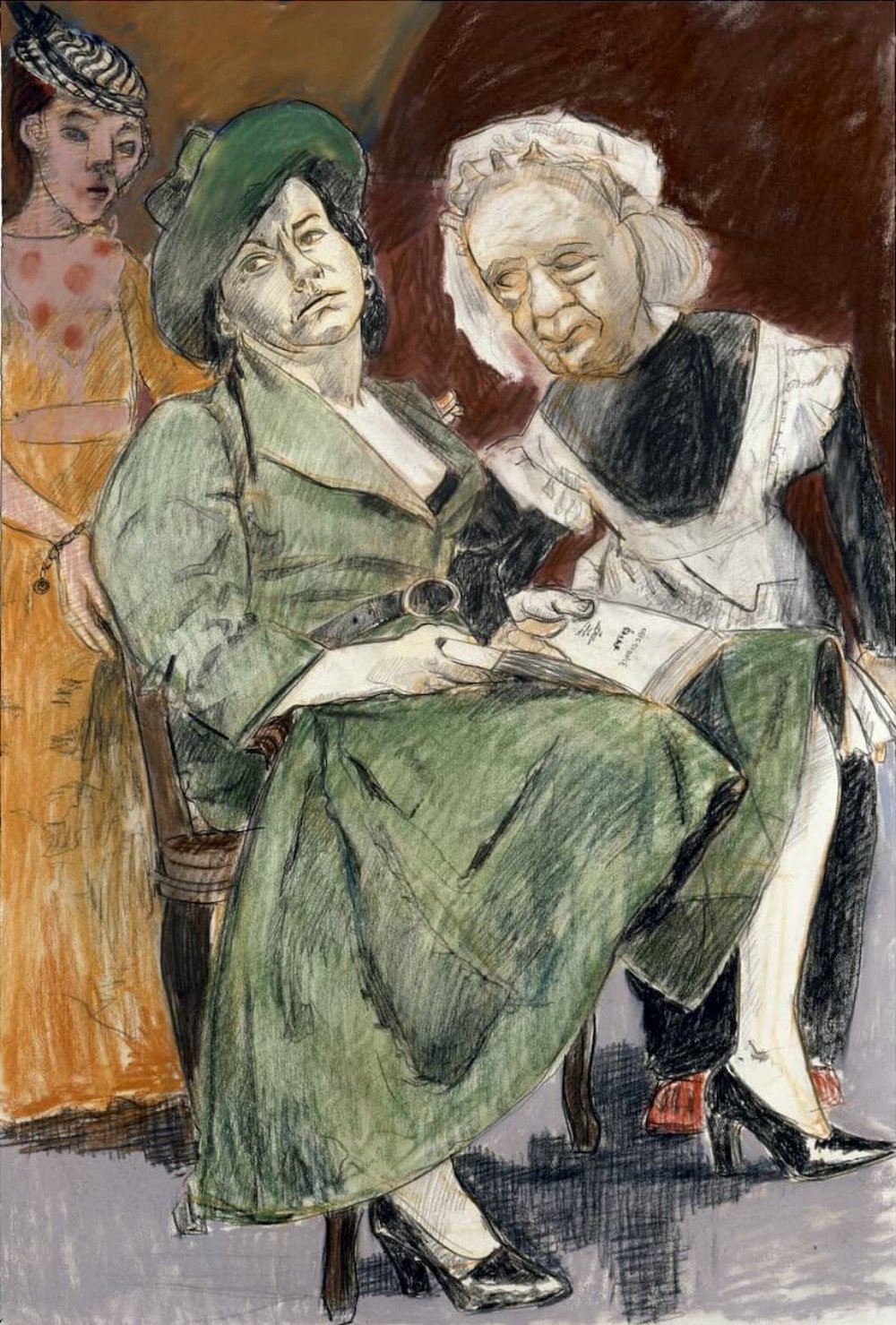 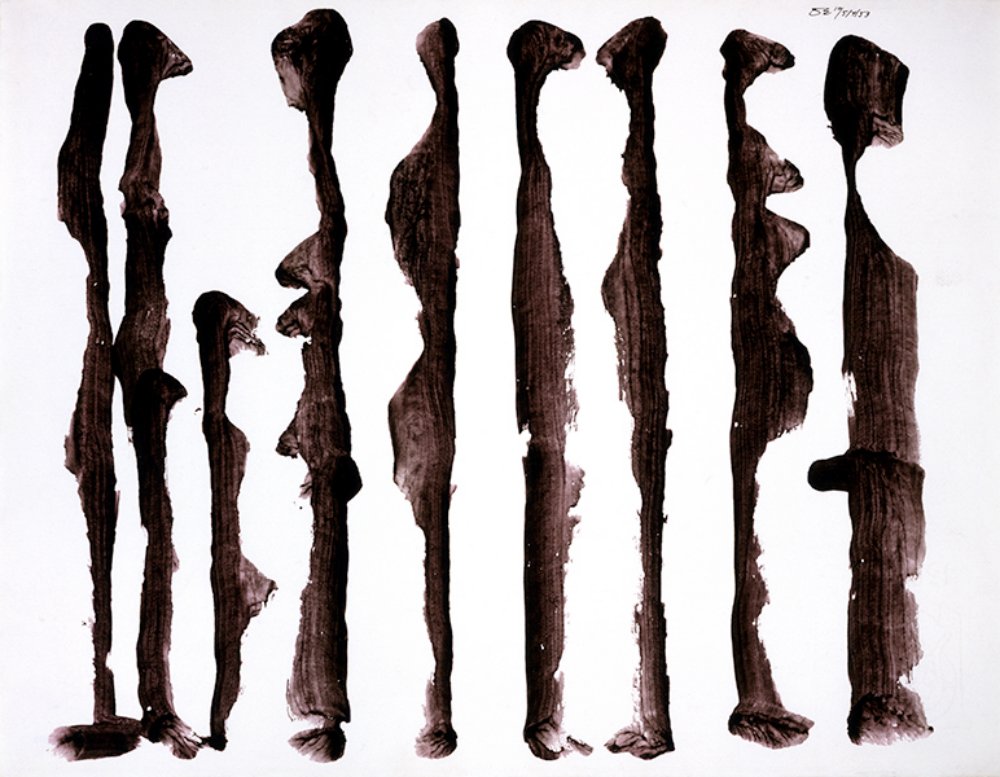 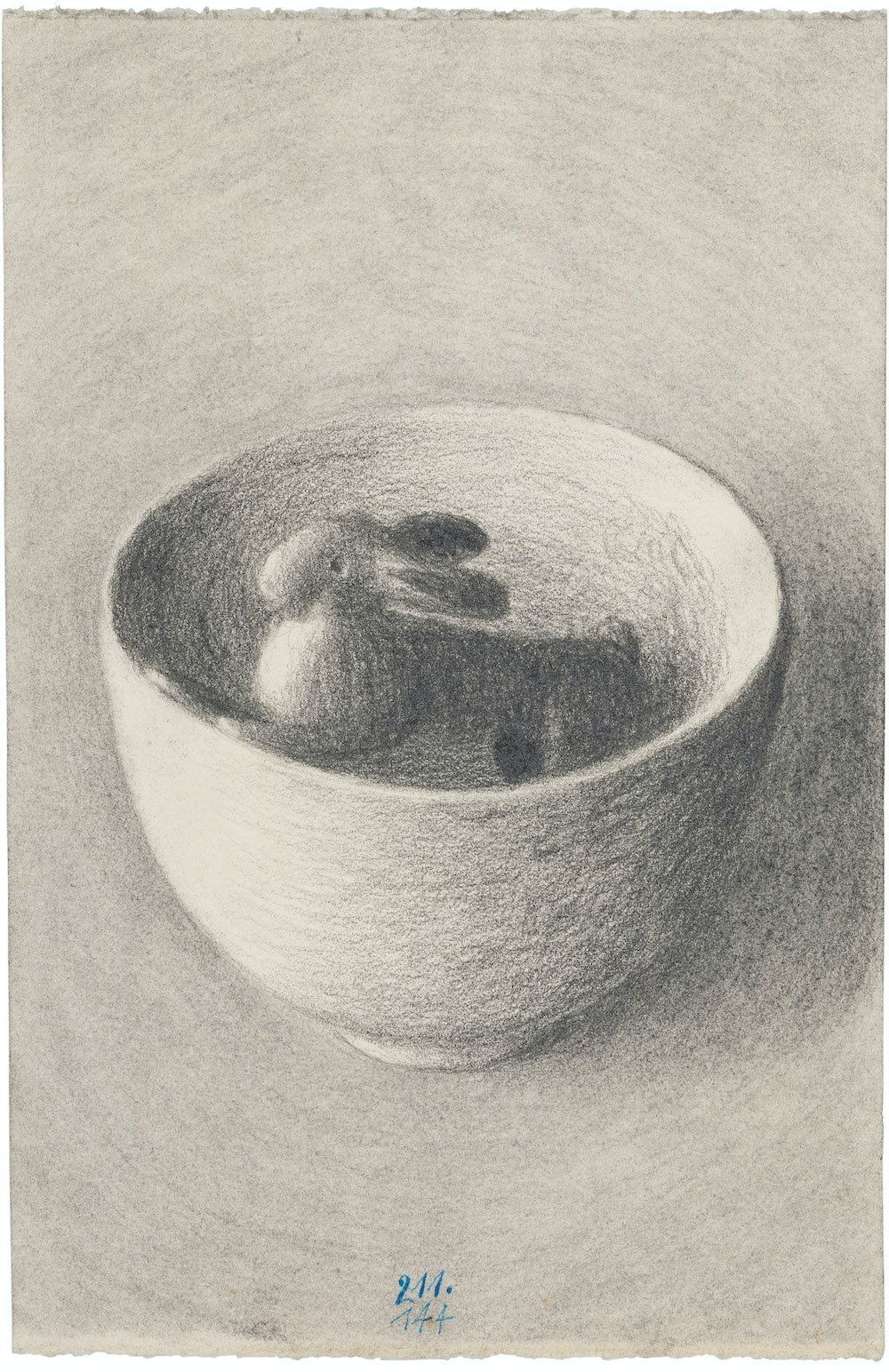 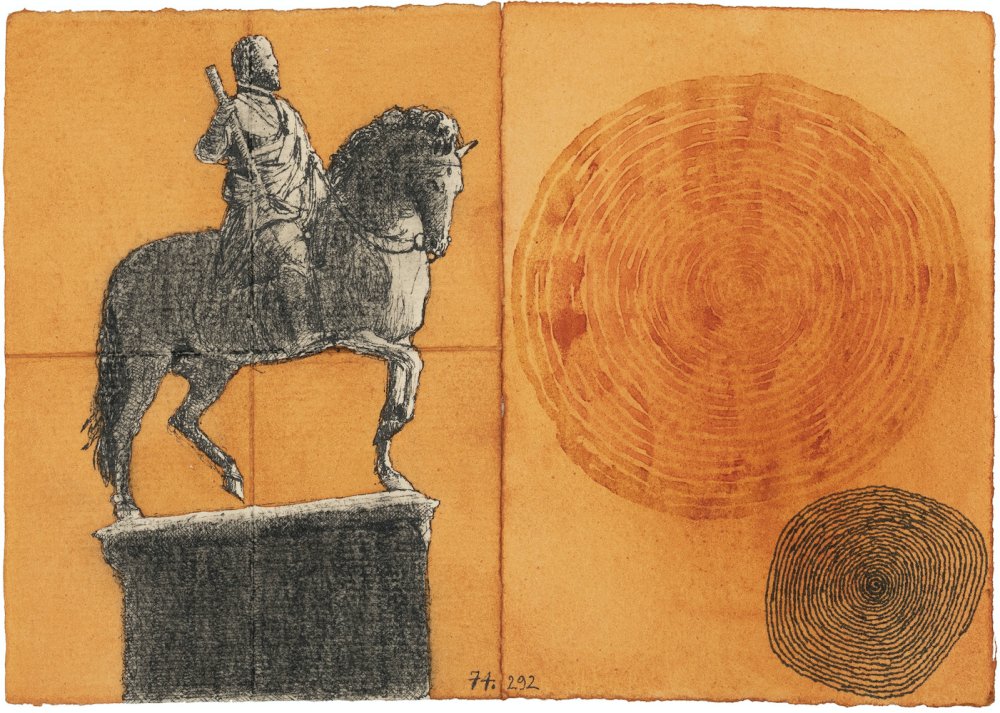 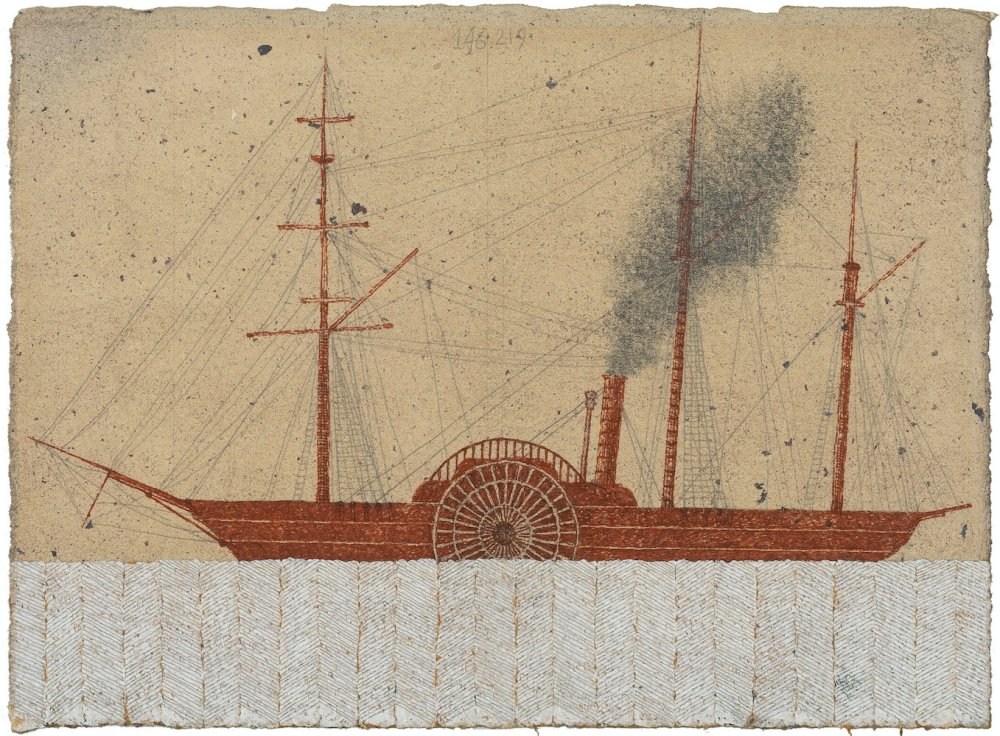 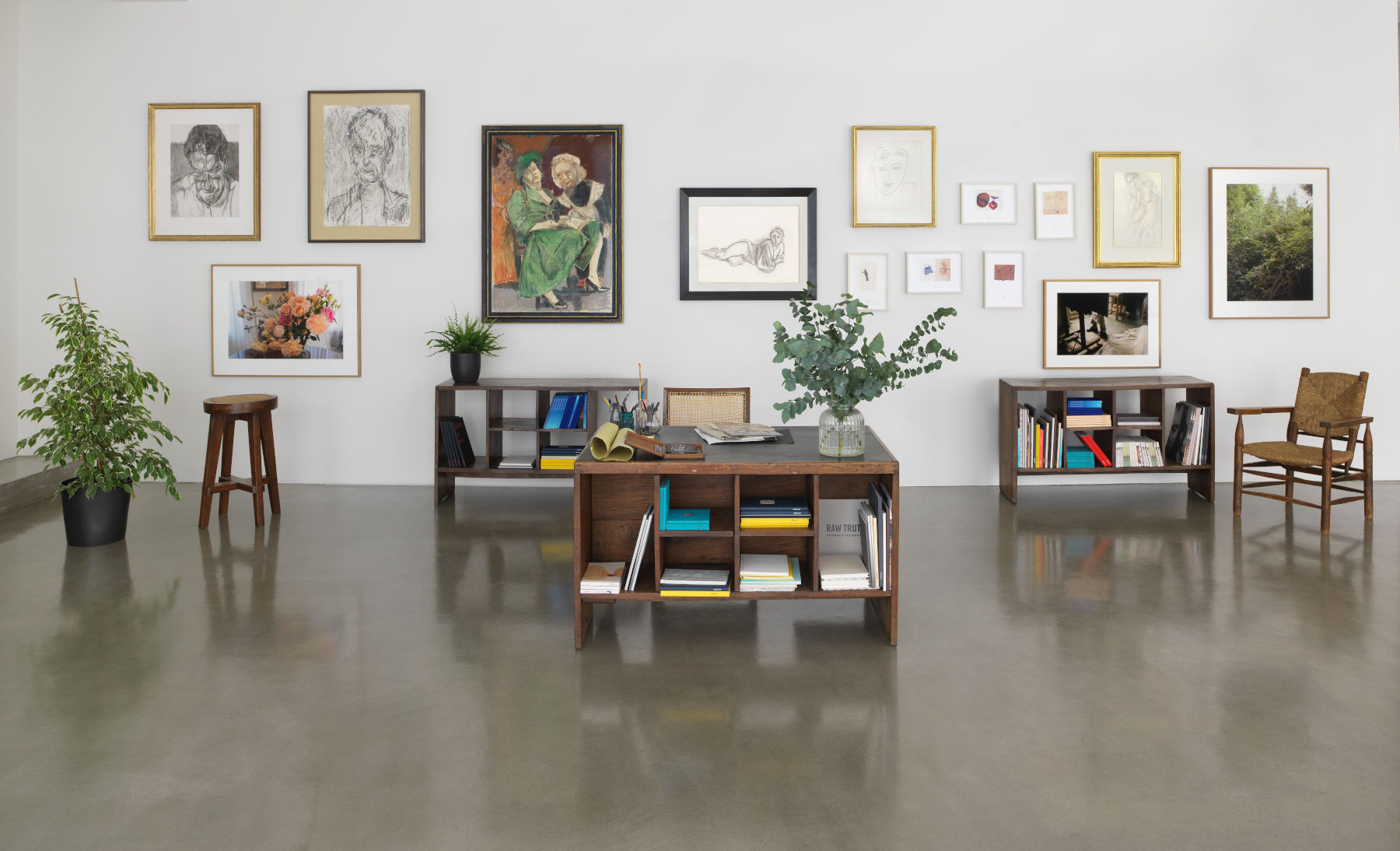 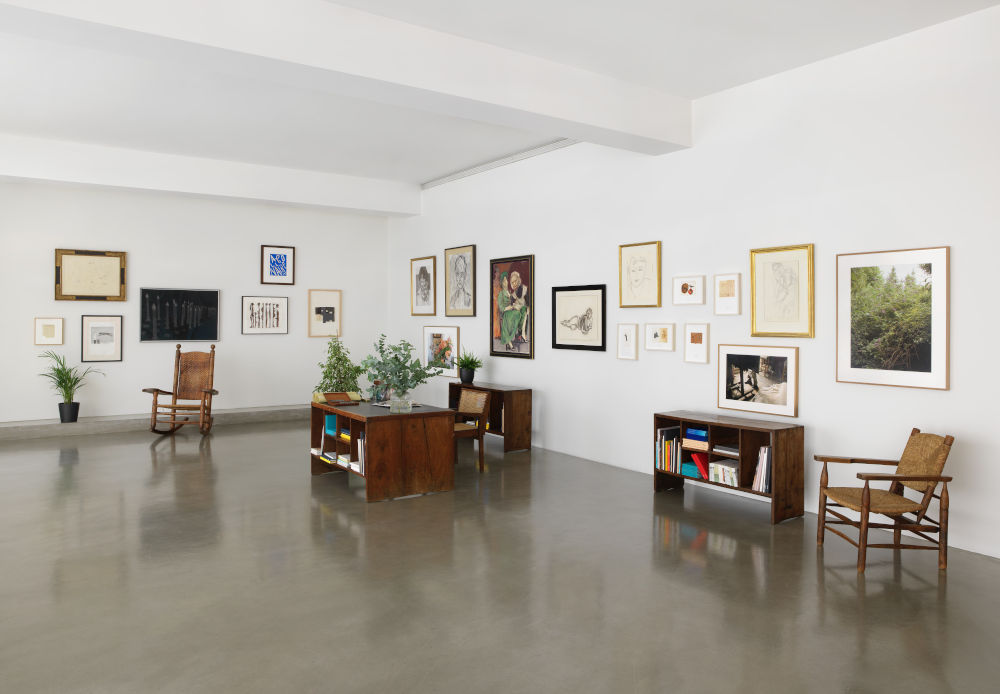 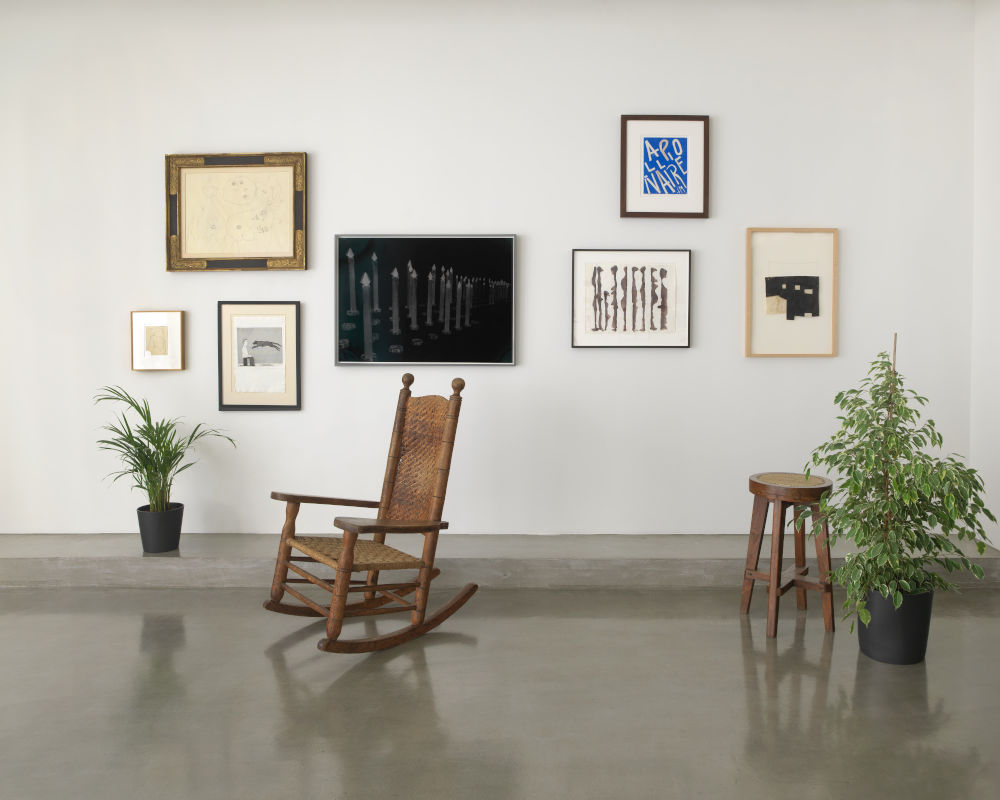 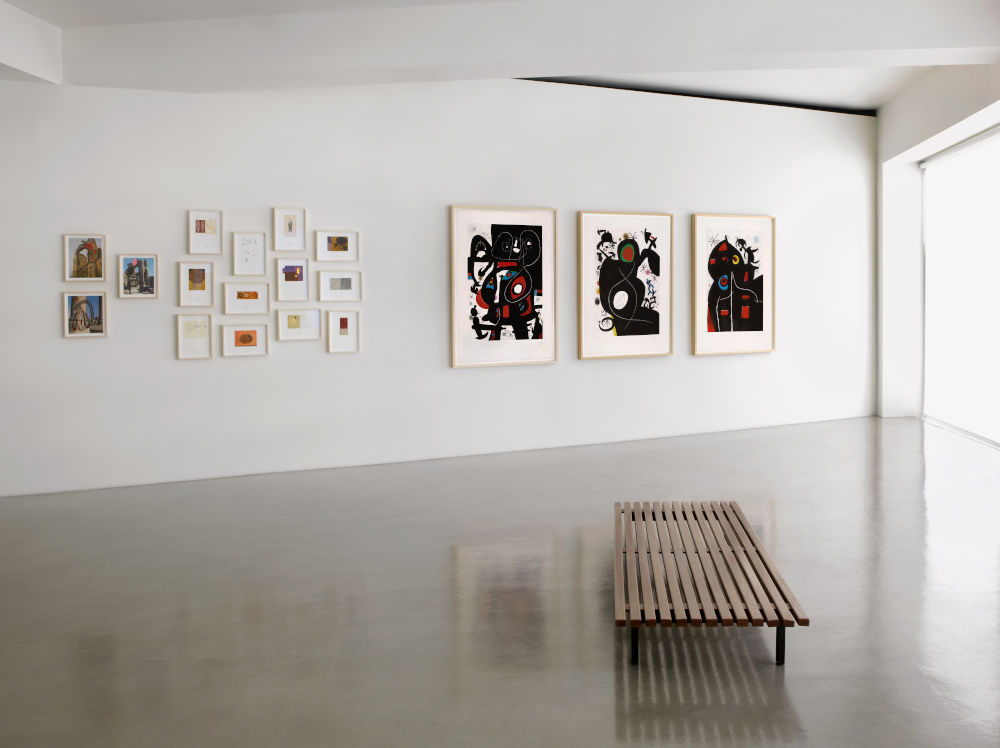 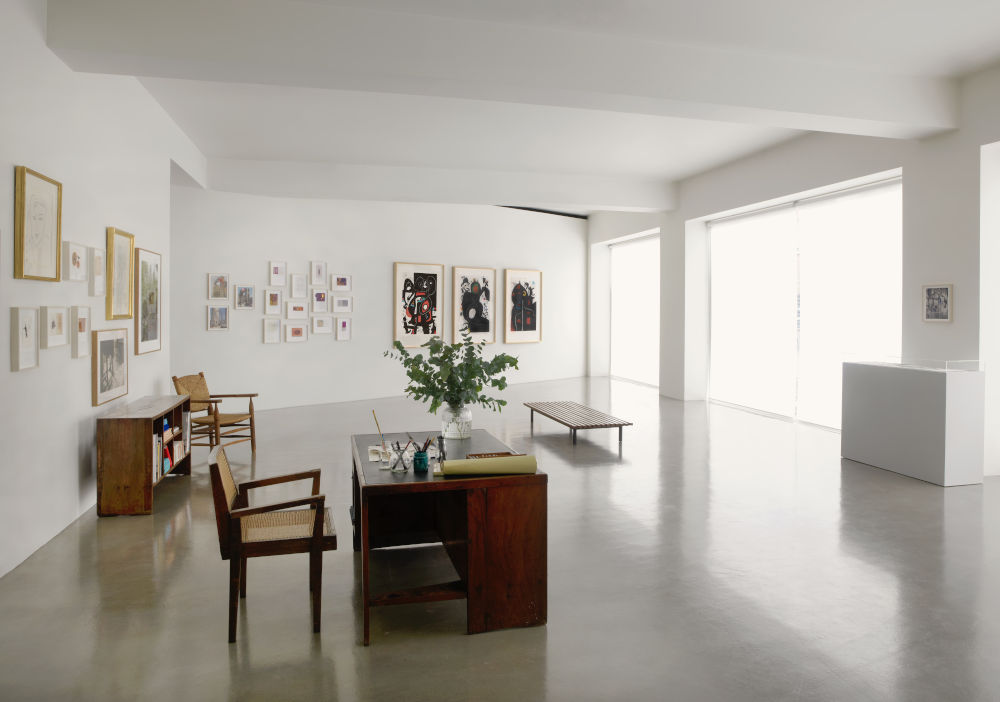 From a 1924 charcoal drawing by Henri Matisse to a 2019 series of etchings by Colombian artist José Antonio Suárez Londoño, this exhibition will span almost a century of art- making on paper and pay homage to a medium that has long been central to artistic experiments.

“Artists have always worked in relative solitude. It is inspiring to see the works and objects they choose to surround themselves with,” says Pilar Ordovas. “We are thrilled to welcome you to the gallery by appointment from 15 June. You will find a tranquil, immersive space, with specially selected furniture, plants, artist’s drawing materials and books on display alongside the one hundred works of art that form The Artist’s Room.”

The original inspiration for The Artist’s Room came from photographs of Henri Matisse’s home in Vence, Villa Le Rêve, in which the artist is seen reading, writing and drawing on the walls, surrounded by his artworks, plants and comfortable furniture. Femme nue couchée, executed in Nice in 1924, is the earliest of the works on display and dates from the artist’s Odalisques period. For Matisse (1869–1954), the act of drawing became virtually an obsession by the second half of his career, and he synthesised his fondness for lavish interior subjects with the simplified grandeur of his drawings. Femme nue couchée, La Persane, 1929, and Tête de femme, 1951, were all drawn with the sensitivity of a true colourist at the height of his powers.

In 1956, Joan Miró (1893–1983) commissioned his old friend Josep Lluís Sert to create his dream studio and living space. Miró filled the space with a variety of inspirational objects, and odds and ends that inspired him, from paintbrushes, crayons and postcards, to shells, butterflies, palm leaves and Hopi Indian dolls. Personnages et oiseau dans la nuit, a pencil drawing executed in Barcelona in 1942, is characteristic of the artist’s imagery of the time, infused with birds and divine messengers with their arms raised to the stars. A few years earlier, Miró had fallen in love with etching, a technique he had been introduced to by the master printer Louis Marcoussis. L’Aveugle parmi les oiseaux, La Métamorphose, Pantagruel, all executed in 1978, and La Triple roue I, from Allegro vivace, 1981, draw on the essential elements of Miró’s late style, which evolved from the tension between his fanciful, poetic impulse and his vision of the harshness of modern life.

A contemporary of Miró, David Smith (1906–1965) challenged sculptural conventions in the US at a time when the public eye was focusing on the large-scale painting of the Abstract Expressionist generation. From 1932, Smith had installed a forge and anvil in his Bolton Landing studio, two hundred miles north of New York City, where he was producing a body of work that was to become the first welded metal sculptures ever made in America. To balance the relatively slow making of his sculpture, Smith often turned to draw, completing up to 400 drawings a year in the 1950s. With a seemingly effortless fluidity of expression, ΔΣ 10/5/4/53, 1953, exemplifies how Smith’s calligraphic drawing style contrasts with the laborious welding process, while still echoing the bold, sensuous physicality of his 3D work.

Around the same time, Eduardo Chillida (1924–2002) returned to his native Spain after studying in Paris, and began to work in forged iron with the help of a local blacksmith, setting up a forge in his studio. Though Chillida is mostly known for his spectacular sculptures, works on paper formed an important part of his practice from as early as 1959 and were crucial in the development of some of his most iconic sculptures. Gravitación GT-1, 1988, is a remarkable example of the artist’s masterful use of simple forms to create tension between the full and the empty. Exhibited in the UK for the first time, Manos, an ink on paper from 1984, is a testament to the artist’s careful examination of the human body’s lines and contours.

From the mid-1980s until his death, Lucian Freud (1922–2011) famously lived on Kensington Church Street in West London, which served as both his studio and his home, and where he would daily receive sitters, as well as family and friends, among them David Hockney and Frank Auerbach. The Painter’s Doctor, an etching executed in 2006, will be shown alongside photographs by his former assistant, David Dawson (b. 1960), who spent the last decade of Freud’s life documenting the artist’s house and garden.

Tucked down a side alley in Camden Town, Frank Auerbach’s studio-home has been his sanctuary since 1954. Very few visitors have been allowed inside, with the exception of a handful of sitters. The requirements are routine, so much so that they seem undemanding: punctuality, and the ability to keep still for two hours at a time. Head of William Feaver, a graphite and chalk drawing executed in 2013–14, portrays the celebrated writer and art historian who has been a regular sitter for Auerbach (b. 1931).

Paula Rego’s (b. 1935) Camden Town studio is situated moments away from Auerbach’s. Here, surrounded by props she has collected and made, including papier-mâché figures, stuffed animals and antique costumes, she creates her intense and courageous paintings and drawings. Girl Reading, executed in pastel, Conté and charcoal on paper in 2009, displays a fragility of line, boldness of colour and directness of image that is celebrated in her work of this period. It was shown as part of the exhibition, Paula Rego, Giving Fear a Face, Centro de Arte Tomás y Valiente, Fuenlabrada, in Madrid last year.

Often associated with the School of London, David Hockney (b. 1937) moved to California in 1964, where he has lived on and off ever since. An important contributor to the Pop Art movement of the 1960s, Hockney is recognised as one of the master draughtsmen of our times. In the spring of 1969, having temporarily returned to the UK, he began to work on Illustrations for Six Fairy Tales from the Brothers Grimm, a series of thirty-nine etchings that would become his most ambitious printmaking project. A Black Cat Leaping, 1969, is one of the eleven etchings illustrating the tale The Boy Who Left Home to Learn Fear.

Based in Brooklyn, Montenegrin artist Aleksandar Duravcevic (b. 1970) fled his homeland following the break-up of Yugoslavia in the early 1990s. While travelling through Italy and the US, Duravcevic became increasingly aware of the precarious, tribal nature of nationality and identity. He developed a body of political work that gained significant acclaim when he was selected to represent Montenegro at the 2015 Venice Biennale. In graphite drawings such as Electric Souls, 2015, and 11 Days, 2016, Duravcevic employs repetition and seriality to remember, remap, and retrace his history and culture, while challenging false claims of hierarchy and hegemony.

Koushna Navabi (b. 1962) makes sculpture, paintings, drawings and installations that explore the constant rub of the familiar and domestic against the surreal and the strange. Born in Tehran, Iran, she is currently living and working in London. From the beginning of her career, she has worked in mixed media with a strong emphasis on textile, embroidery and knitting, creating a variety of deformed, transformed and reformed objects. Apadana, Hall of Persepolis / fragment and Tagh-e-Bustan / fragment, both made in 2019, have been executed in pen, pencil and acrylic paint, applied to images of ancient sites of historical importance in Iran, which have been cut out of vintage books. Navabi has recast the comforting landscapes of home, childhood and memory and expressed the impossibility of stability: the joy and the trauma of the journey, of being here, of being elsewhere.

Colombian artist José Antonio Suárez Londoño (b. 1955) has devoted four decades to drawing. Through disciplined, daily practice, he has developed a vast repertoire of small-scale drawings. Londoño takes his inspiration not only from the dazzling variety of visual and textual sources in his studio, ranging from illustrations, paper scraps and photographs to an extensive library of classical texts and pop songs, but also from his scientific training, and a childhood obsession with an illustrated Larousse dictionary. Indeed, an encyclopaedic quality is visible in the drawings’ delicacy of line, reminiscent of botanical or anatomical diagrams, with elements labelled with letters or numbers, as if illustrations to a text to which we are only occasionally given the key.