In the second spring variation, only works in which “text” appears are included. When viewing the exhibition, it quickly becomes clear that the texts in the individual works take on very different functions. The works in the exhibition allow an in-depth look at the manifestations of text in art, from posters to digital realisation, from found objects to appropriation. 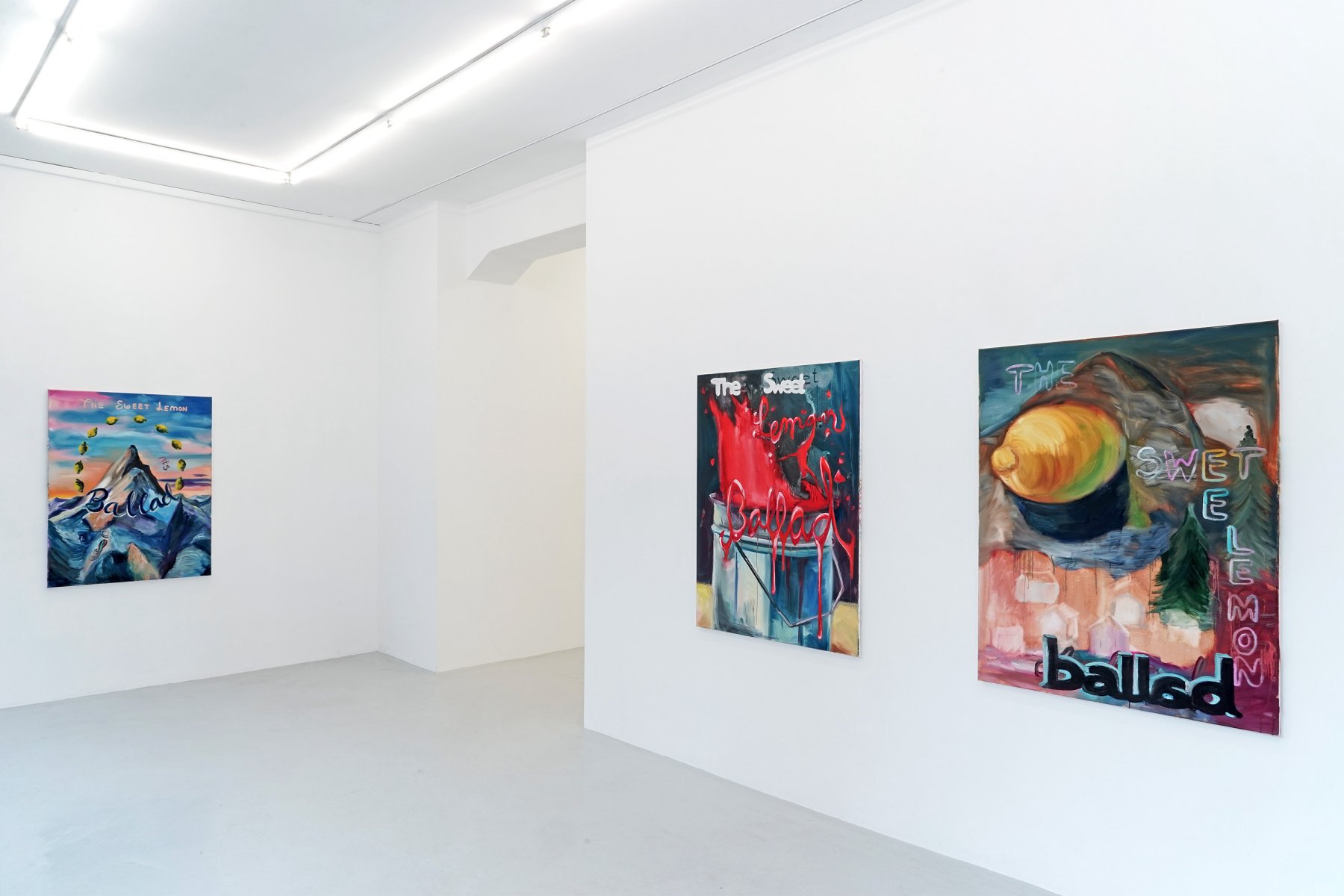 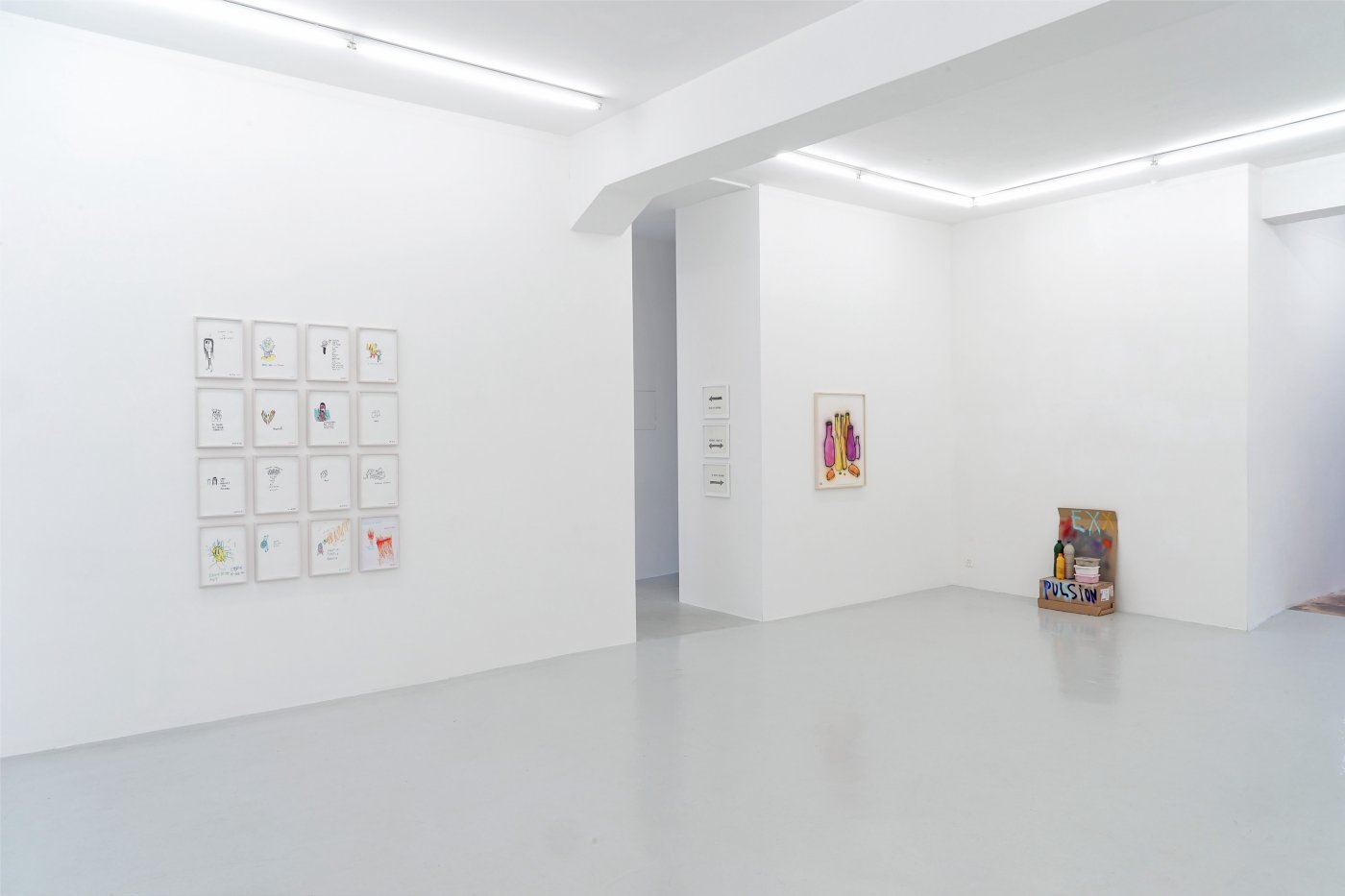 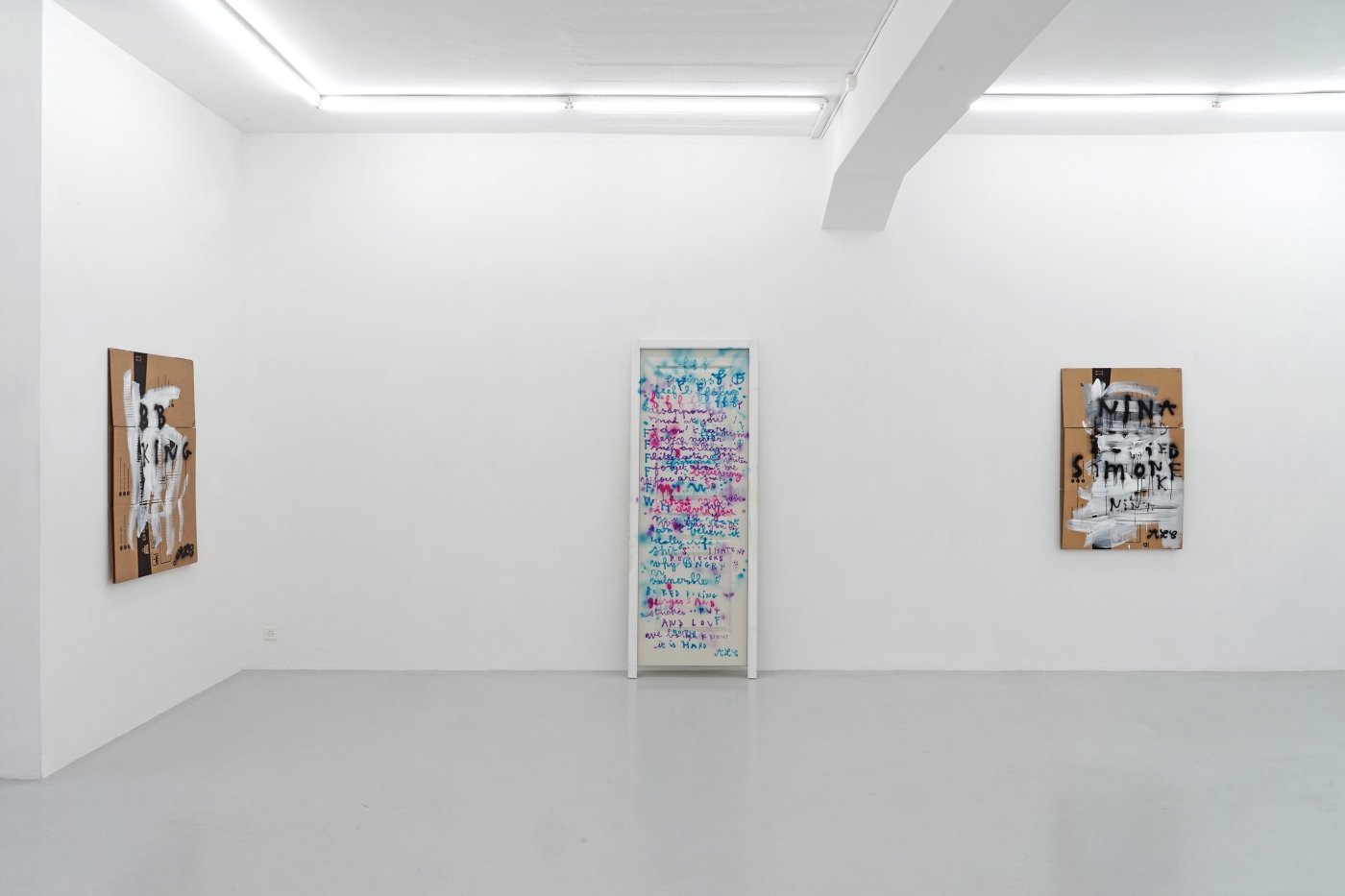 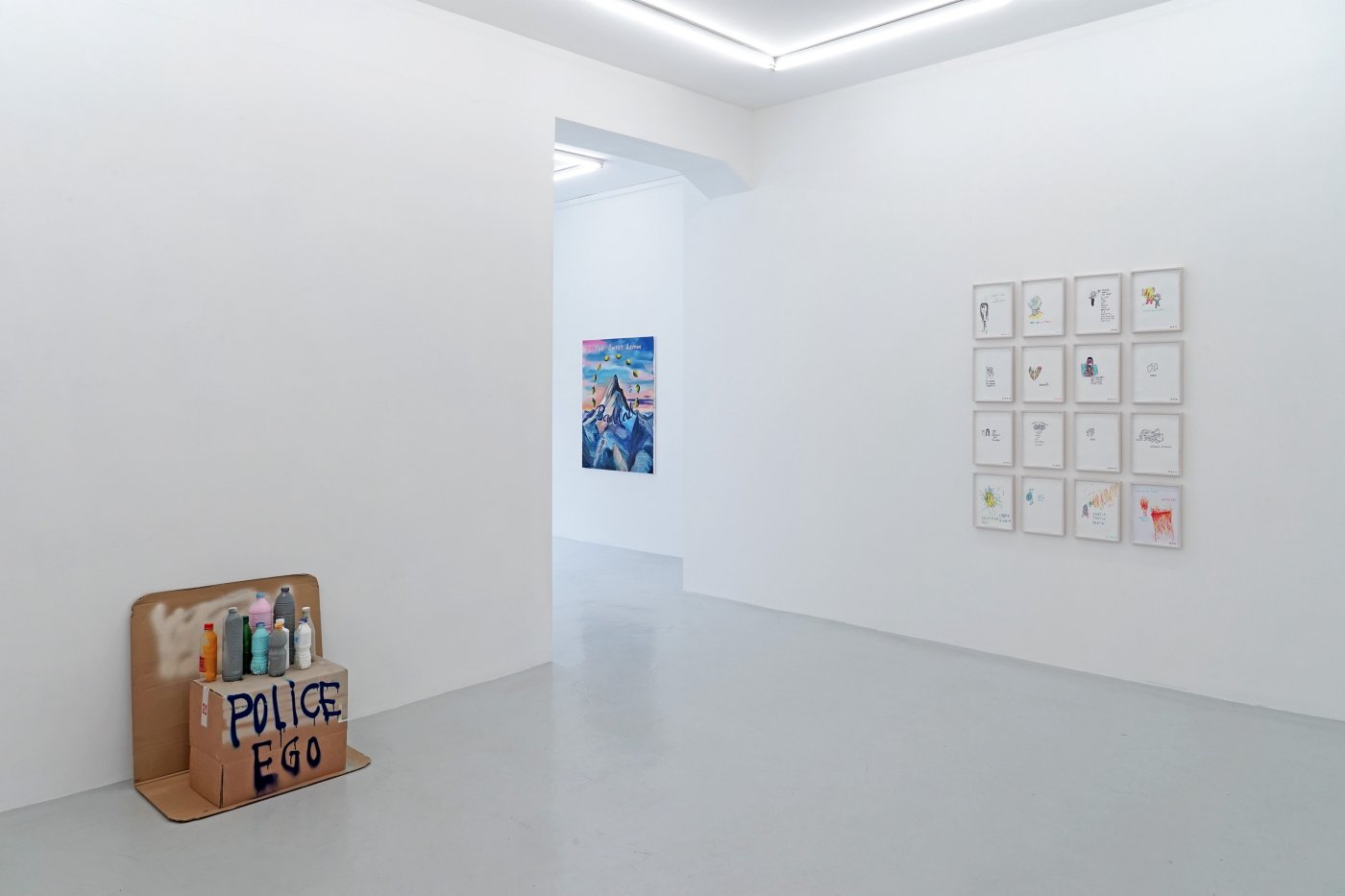 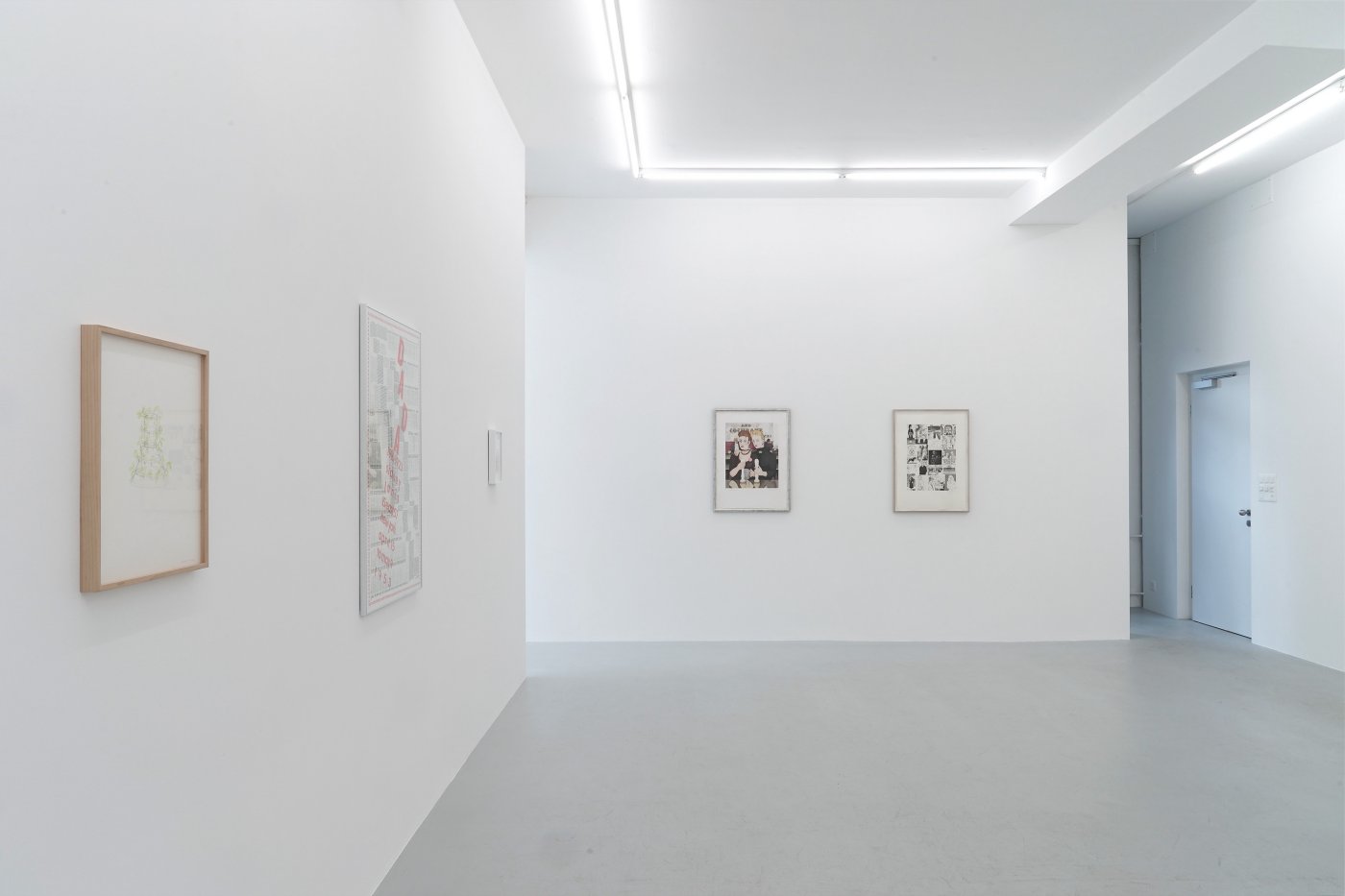 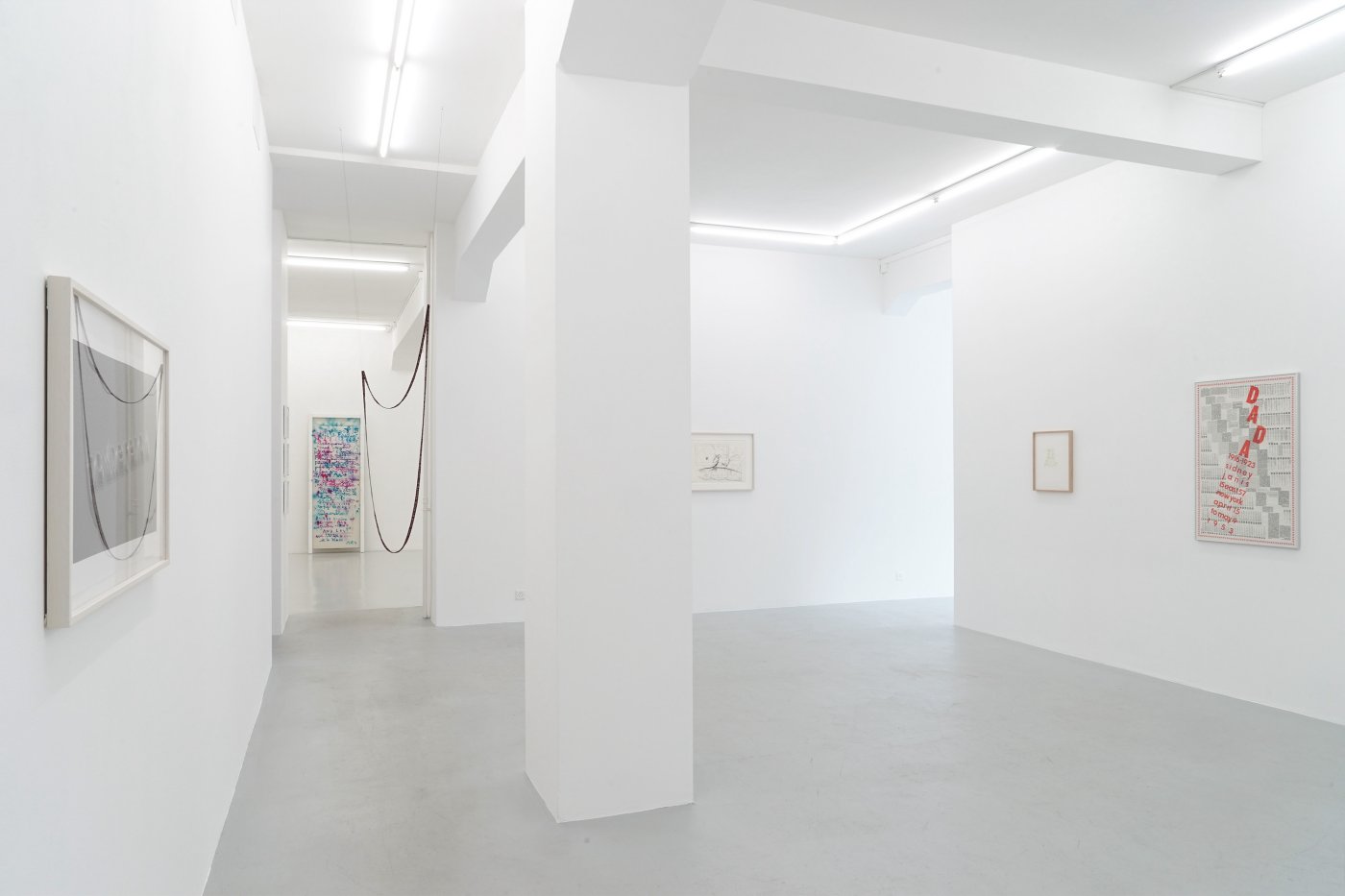 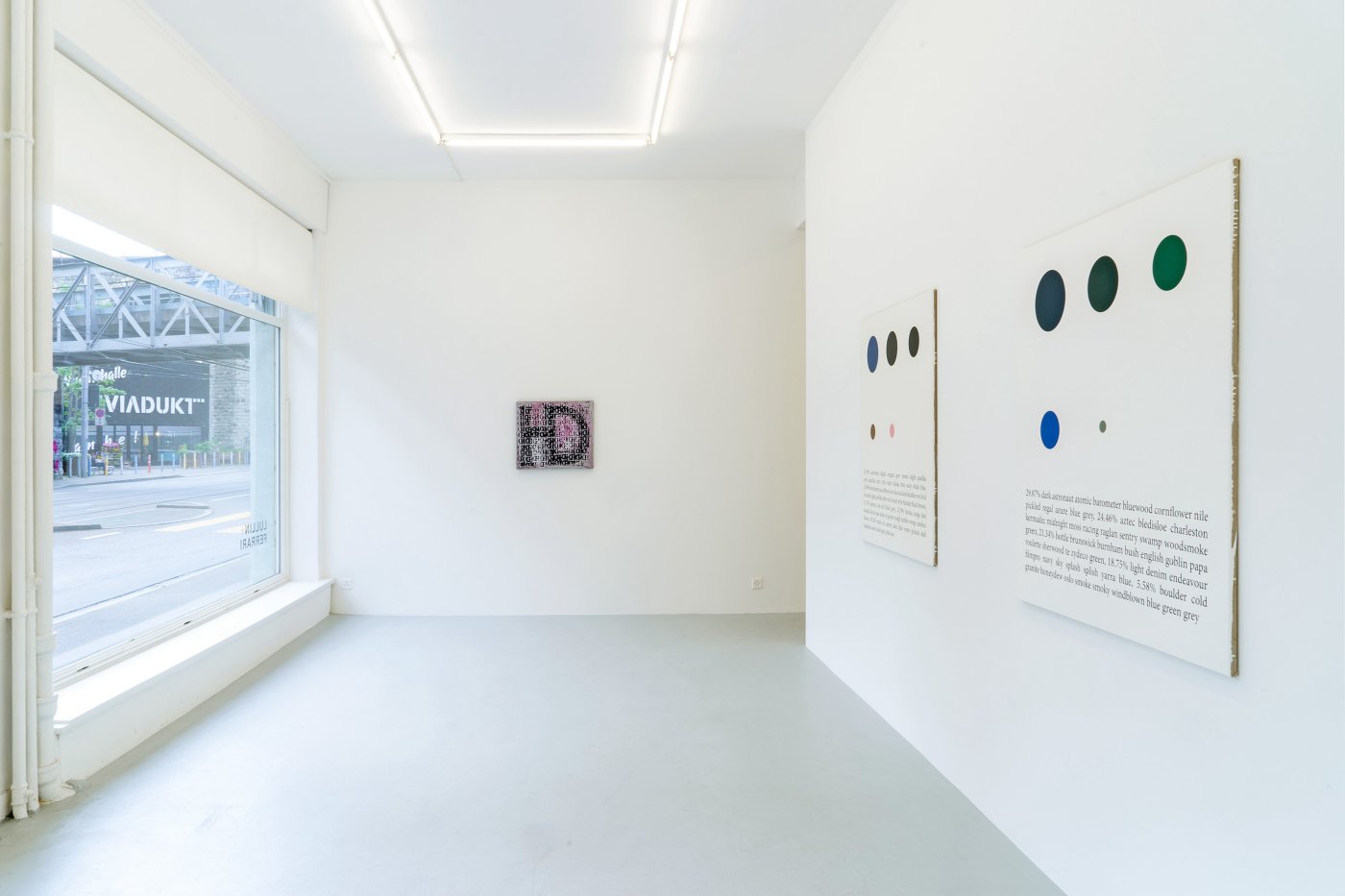 By Klodin Erb, this year’s winner of the Swiss Grand Award for Art / Prix Meret Oppenheim, the first room features seven paintings created in 2017, the year following the completion of her film The Sweet Lemon Ballad as its fabricated posters. The paintings contain subtle references to individual film scenes; one clearly refers to the film production company Paramount Pictures.

The middle room is dedicated to works by Anne-Lise Coste, who is presenting the major solo exhibition Poem Police at Kunsthaus Baselland until 17 July 2022. After explicitly refraining from works with texts in her last gallery exhibition in 2021, various text works are now gathered together. Works from different creative periods are shown. Two groups of works are dominated by the material cardboard. A wonderful 16-part group of felt-tip pen drawings contains performative aspects and autobiographical references, including a magnificent self-portrait in pencil of Anne-Lise in Happiness.

In the third room, a banner with a passage of text by Simone de Beauvoir reaches into the space. With utmost meticulousness, Franziska Furter has used thread and glass beads to join a passage of de Beauvoir’s text translated into English into a banner. Before that, a Dragon Triptych by Jamie Isenstein points the way and warns of unpleasant encounters. The watercolour Now Appearing! with its curved frame could refer to dragons – next to it we are again in the animal kingdom, this time the title of the drawing 3 Rabbits makes its own way in Dieter Roth’s multi-layered work. Bethan Huw’s watercolour Late Spring is not only an excellent fit for the season, but with its depiction of Marcel Duchamp’s bottle dryer with delicate leaf ends, it also hangs accordingly to the 1953 Dada poster and exhibition catalogue designed by Marcel Duchamp for the Sidney Janis Gallery in New York. A work by the performance artist Dora Garcia, which could be described as an assisted readymade, concludes the group of works on this wall. Richard Hamilton’s stunning etchings Bronze by Gold and How a Great Daily Organ is Turned Out not only represent special achievements in etching, but are subtle pictorial interpretations of two chapters of James Joyce’s novel Ulysses. The silkscreen nowherenow by Philippe Decrauzat symbolises the fleetingness of the digital world.

The fourth room of the gallery is dominated by two meticulously painted pictures by Sebastian Utzni from the Prediction Paintings group. To understand these conceptual works, one has to backtrack a little: before starting to work on the Prediction Paintings, Utzni asked various art world players which paintings would achieve record sales in 2019. He then used a computer programme to analyse the colours used in the paintings mentioned by the experts. The programme filtered out five colours from each painting’s colour spectrum. Similar colours were combined until five remained. The programme uses the colour system of the 1625 standardised RAL colours. The upper half of the Prediction Paintings can be read like infographics: The size of the circle indicates the frequency of the colour used. Since each RAL colour is assigned a unique number as well as a description, the percentage of use and the name of the colours can be read in the lower part. The painted wording of the analysis in the lower part of the picture reads like bot poetry. Next to these works is the painting DH by David Hominal, which can be described as a self-portrait because the artist stamped his initials on the silvery ground. Opposite is a multiple by Ian Hamilton Finlay, which alludes to the turmoil of the French Revolution through the term Thermidor and a severed ear of wheat. Thermidor was the month in the calendar of the French Revolution when the summer heat was at its most intense and the grain at its ripest. Moreover, in 1794, it was the month when Robespierre and his political allies met their deaths by guillotine.

The exhibition “Text” brings together a variety of manifestations of texts in artistic works. It becomes clear that “text” fulfils a wide variety of functions in works of art: Often it merely gives the title, sometimes it explains the picture and sometimes it becomes a constitutive component of the artistic work. For each work, the task of the text must be determined anew: We invite the audience to this exploration tour in the second spring variation.

Participating artists from the gallery: