To visit the exhibition, book a timed viewing appointment here.

In a wide-ranging practice spanning four decades, postwar Japanese artist Tetsumi Kudo (1935 – 1990) explored the effects of mass consumerism, the rise of technology, and ecological degradation on post-war society through satirical, critical, elaborately detailed and meticulously constructed environments that continue to exert a powerful influence on artists today. ‘Tetsumi Kudo. Metamorphosis,’ the artist’s first exhibition at Hauser & Wirth New York, focuses upon the late artist’s idea of metamorphosis which emphasizes the need for personal and collective spiritual evolution beyond the values of Western Humanism, which he believed caused war, racism, and colonialism, and alienated people from the natural environment. 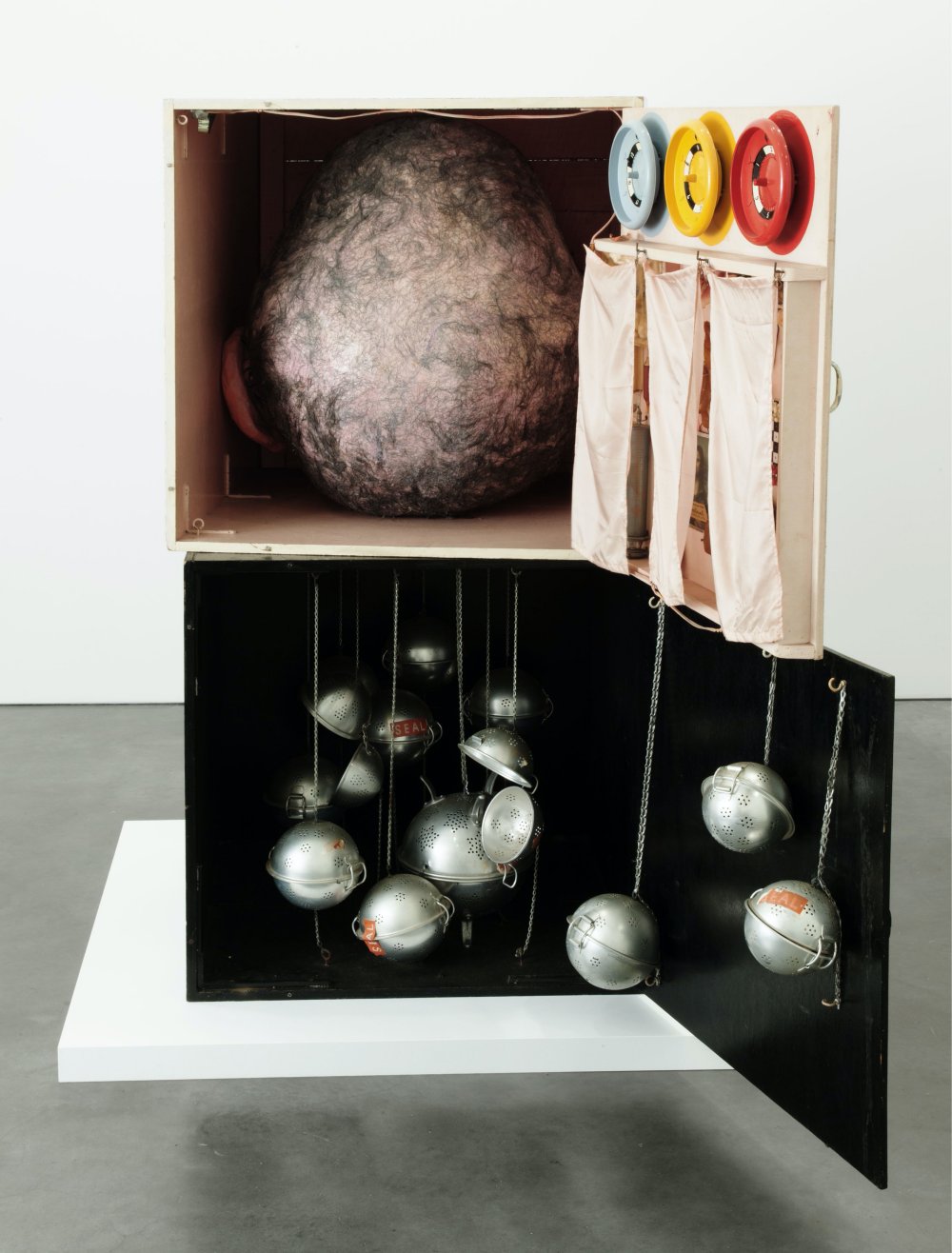 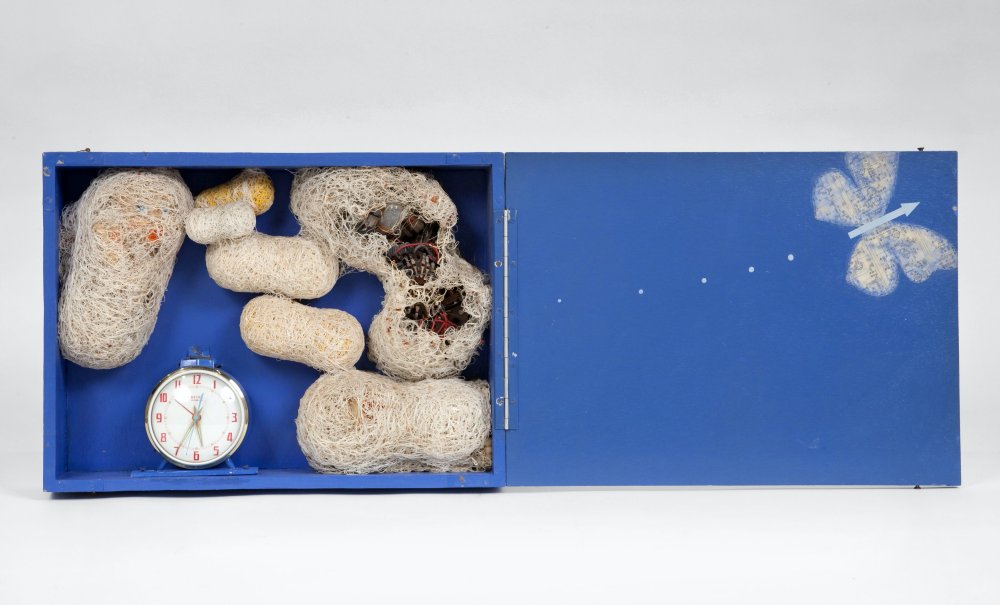 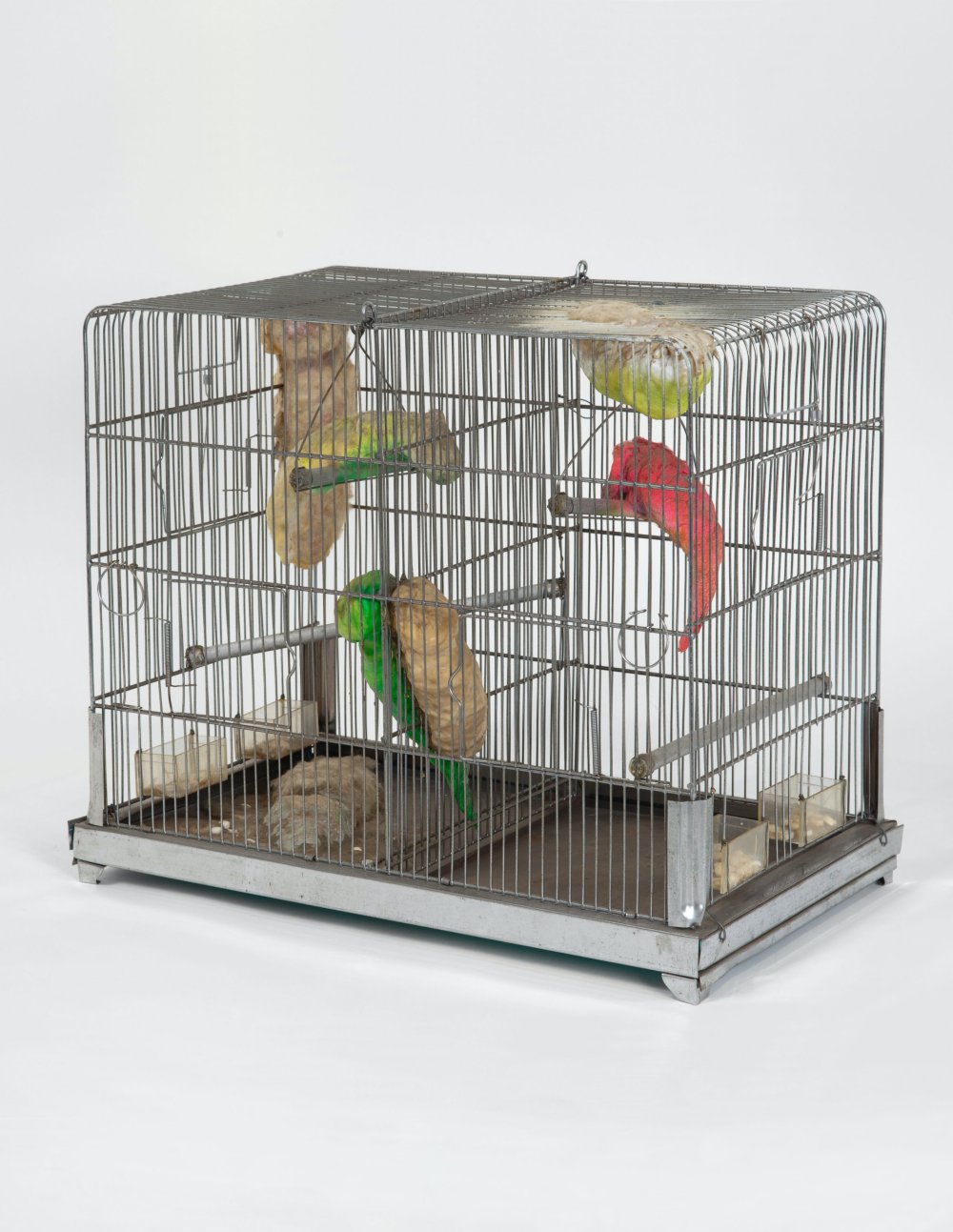 Tetsumi Kudo
For Your Living Room - For Nostalgic Purpose, 1966 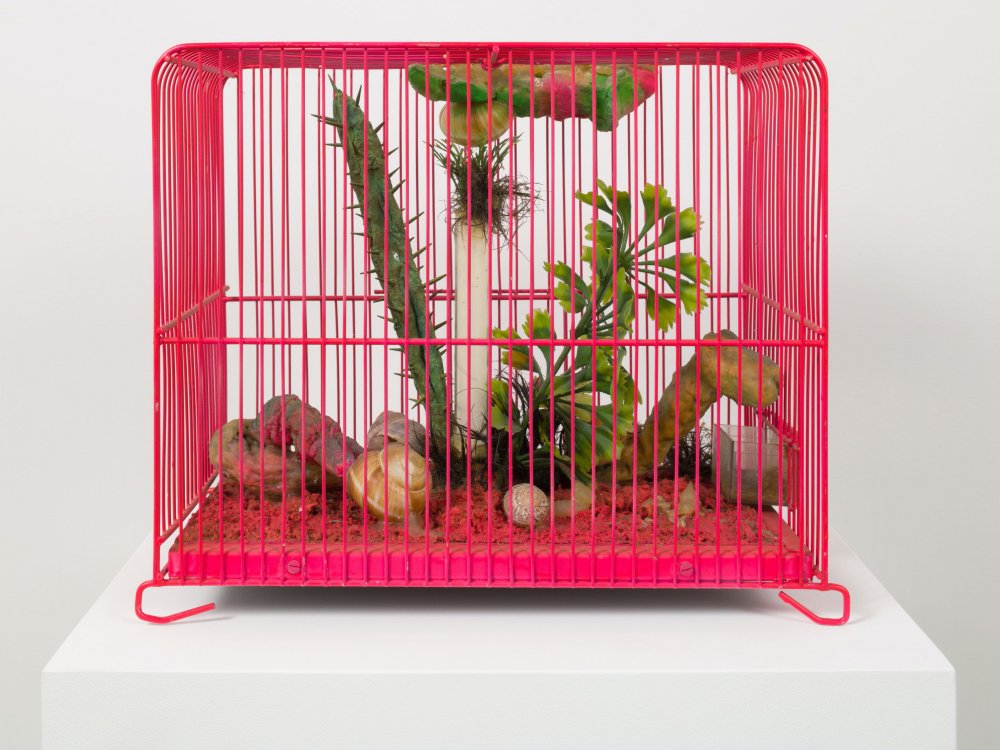 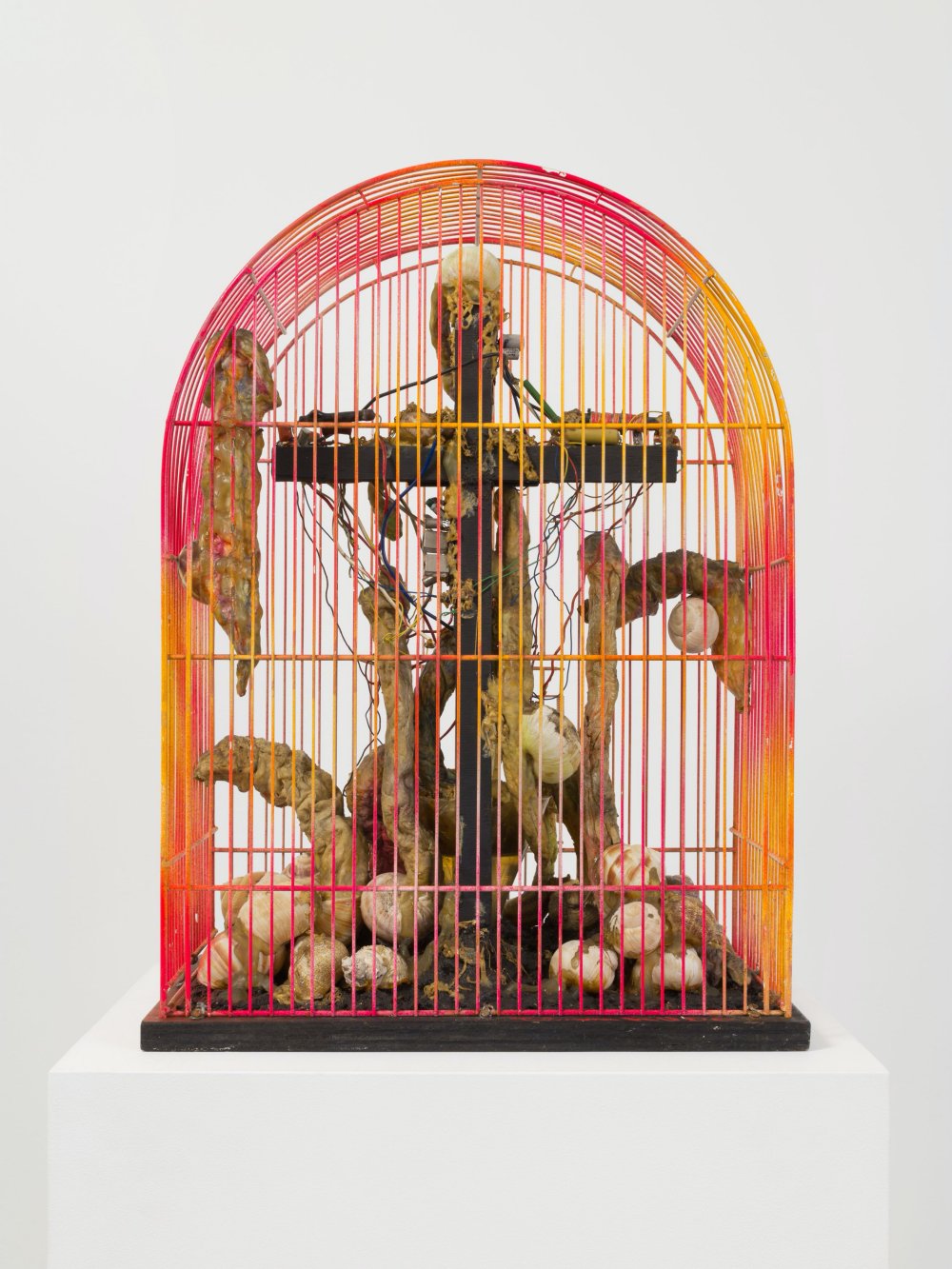 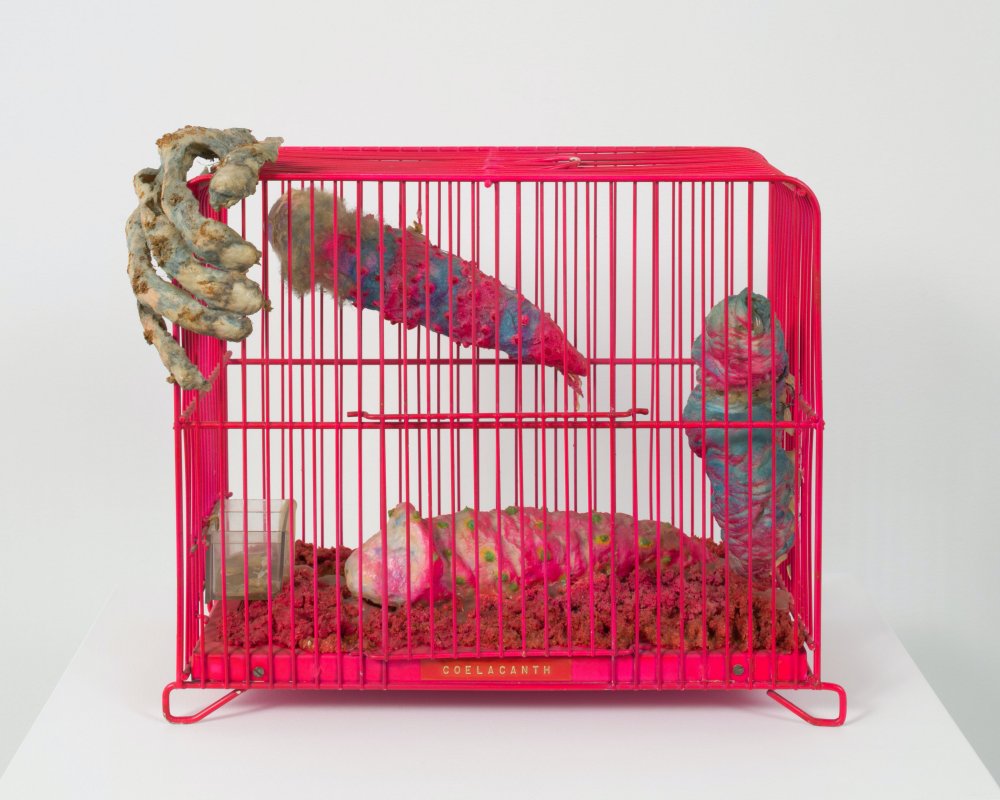 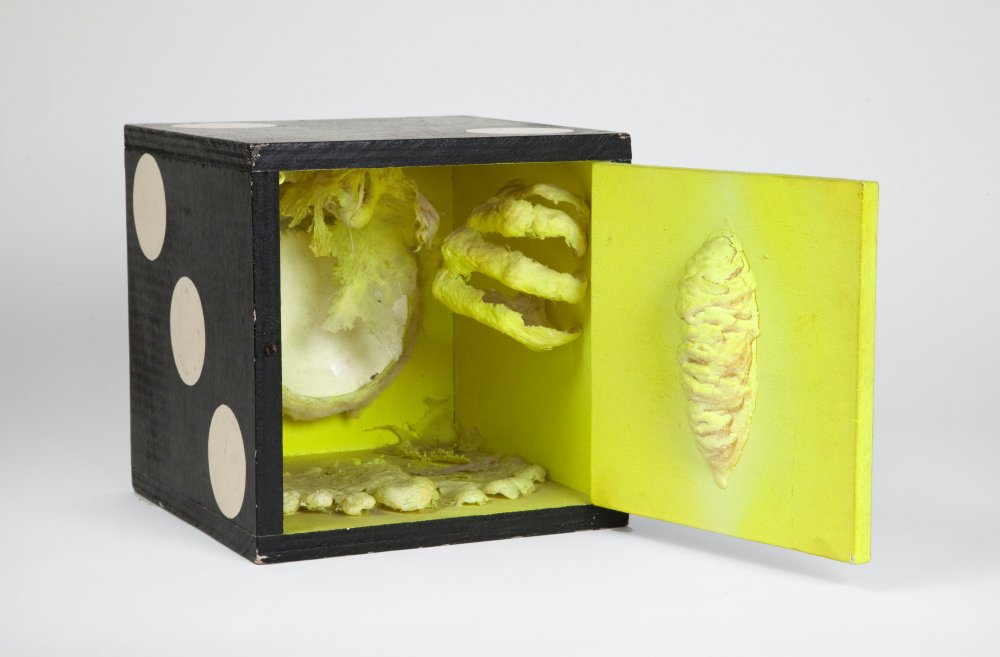 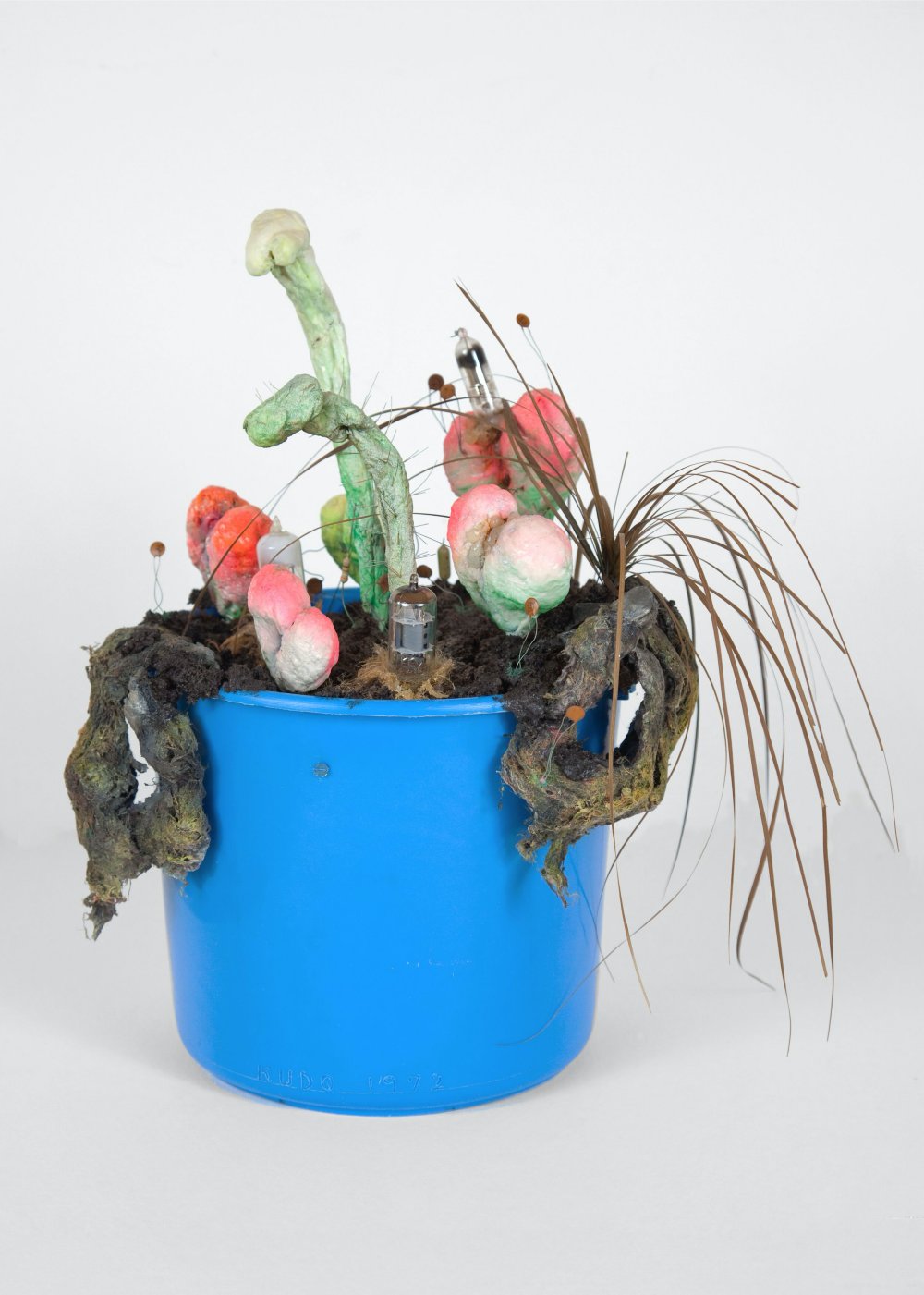 Tetsumi Kudo
Cultivation of Nature & People Who Are Looking at it, 1972 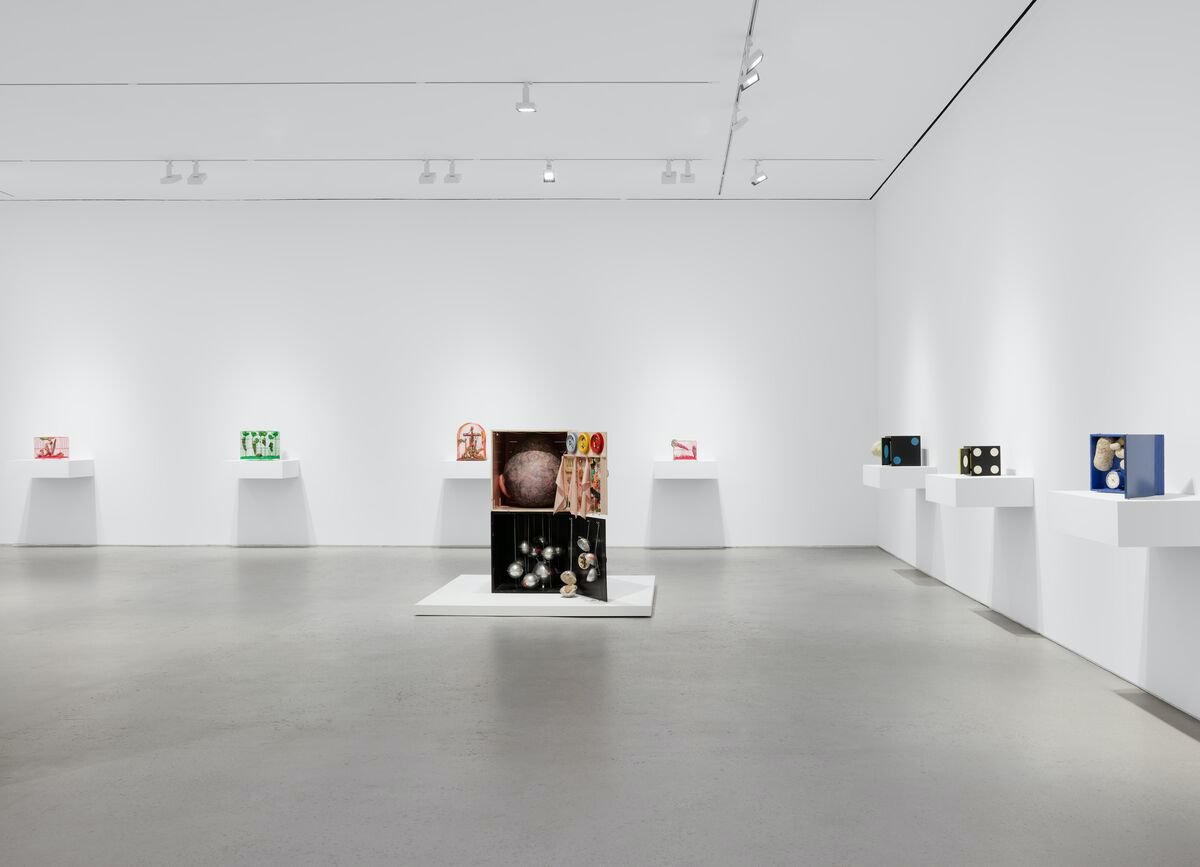 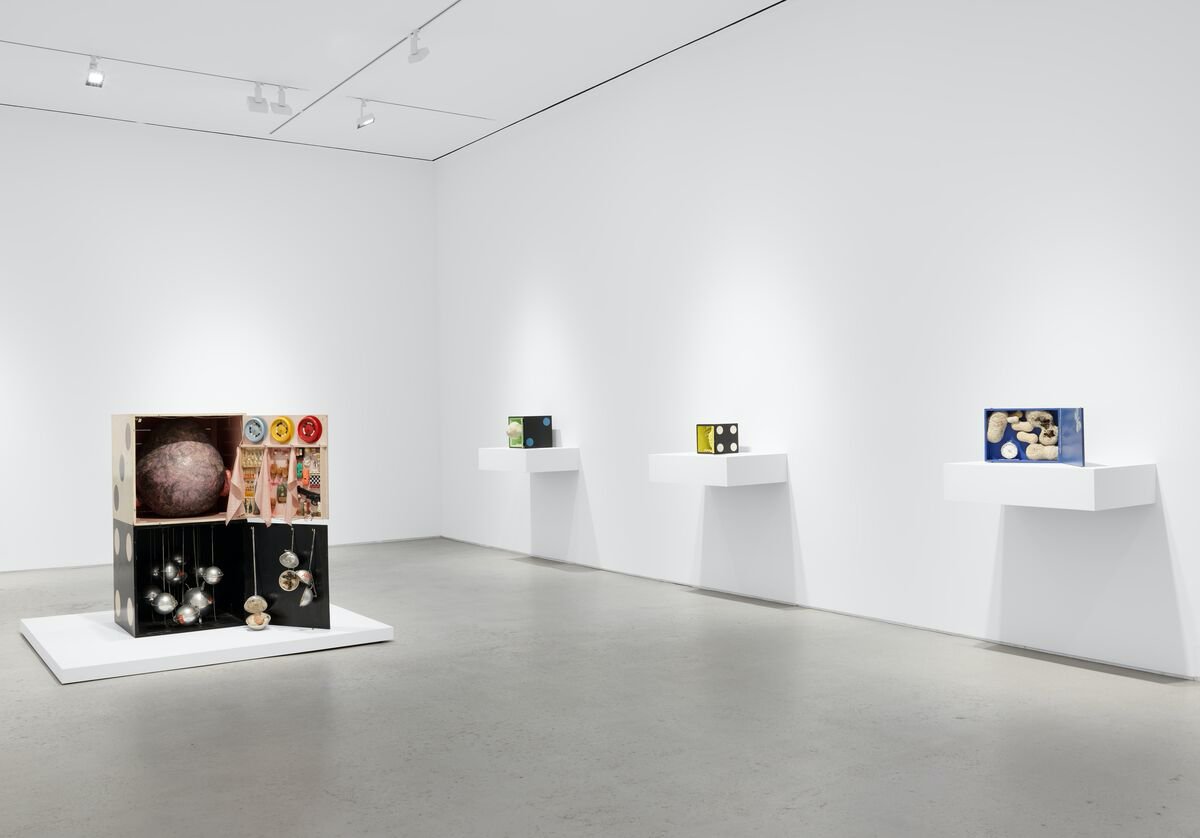 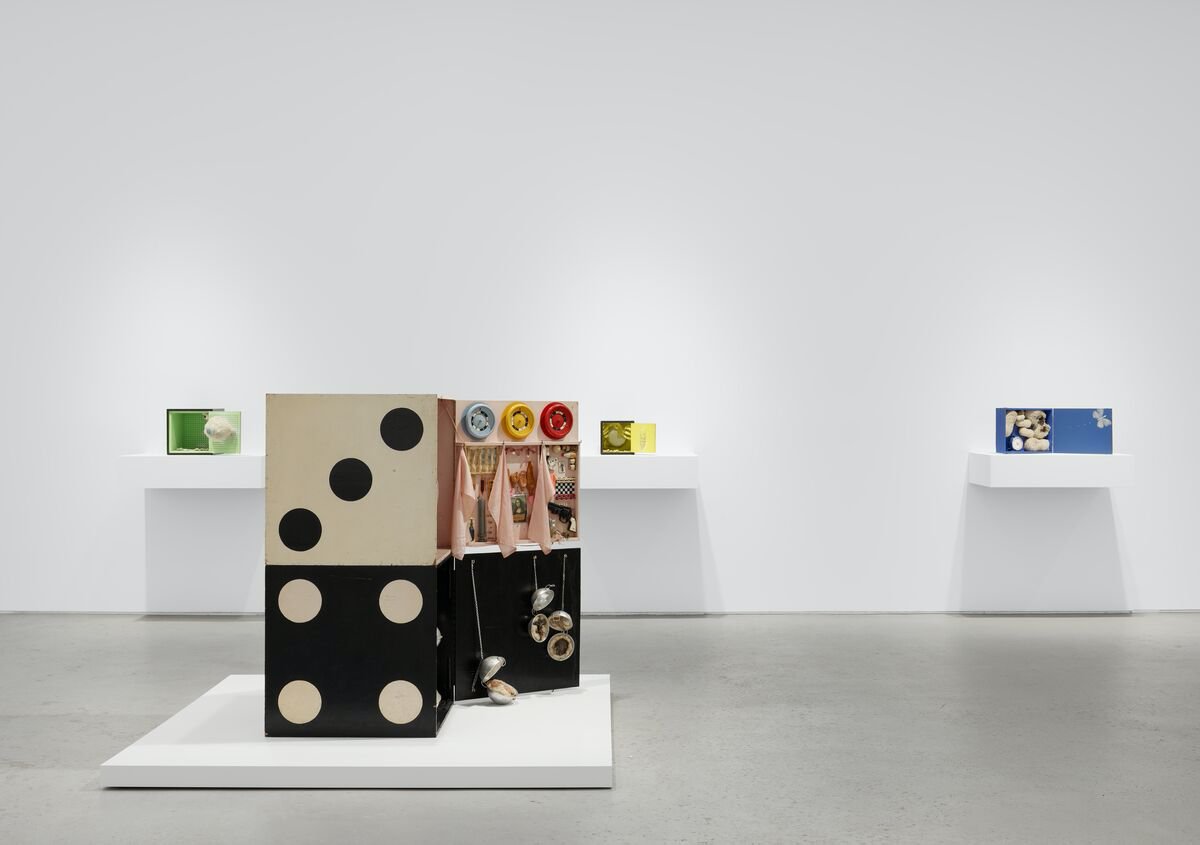 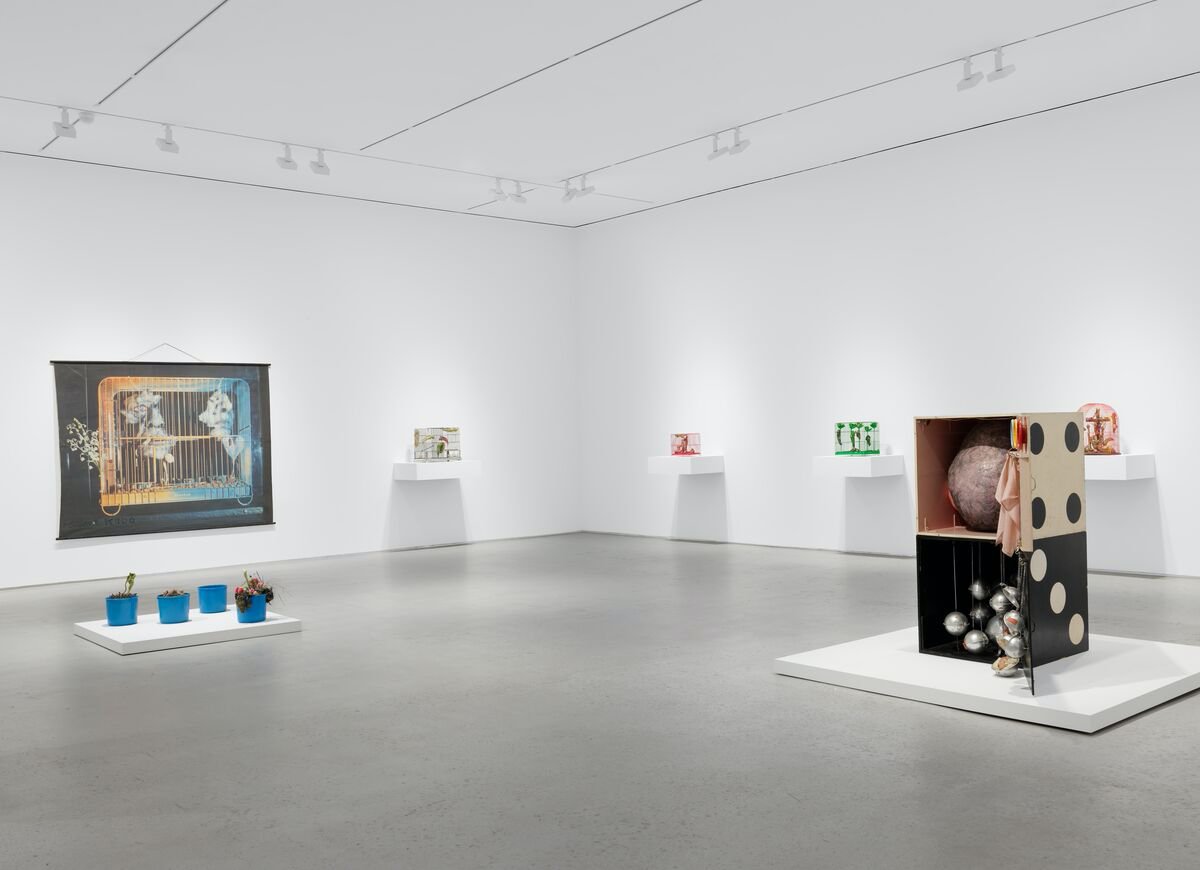 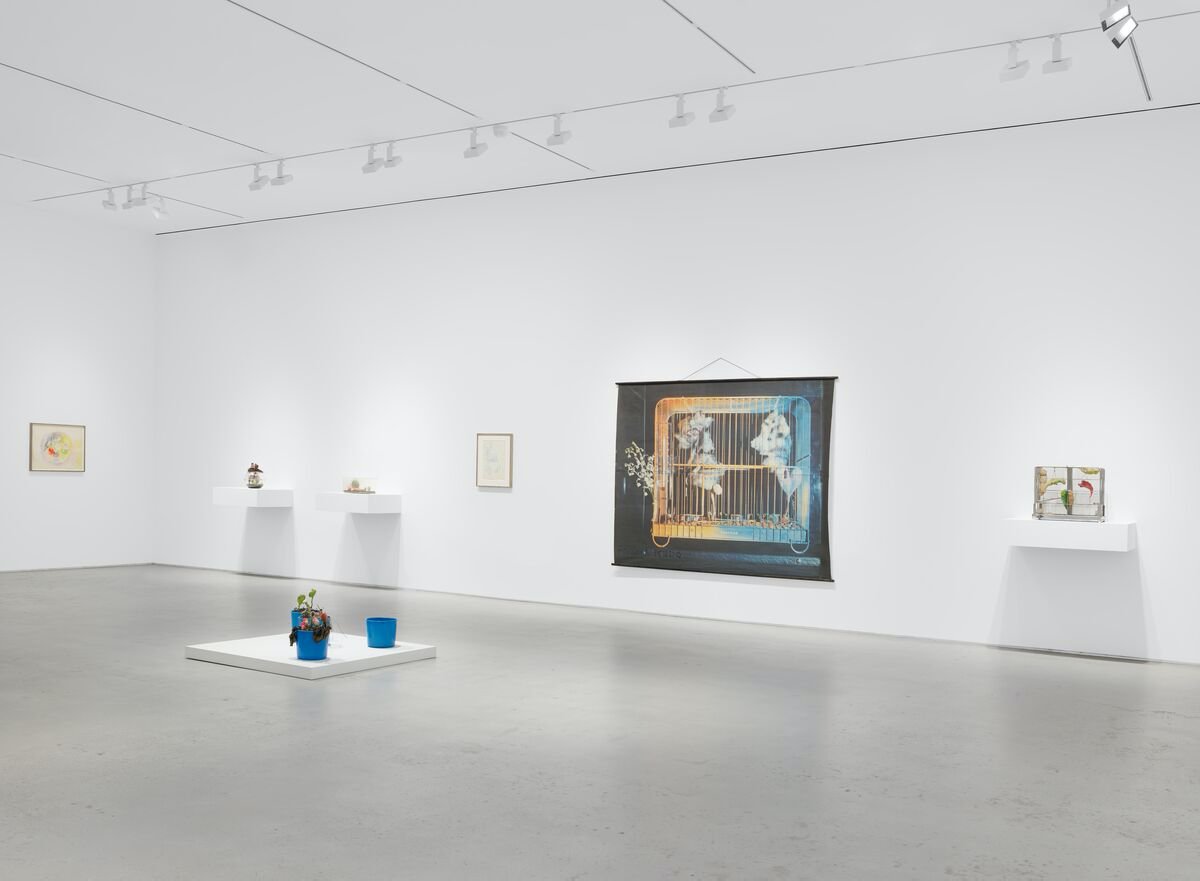 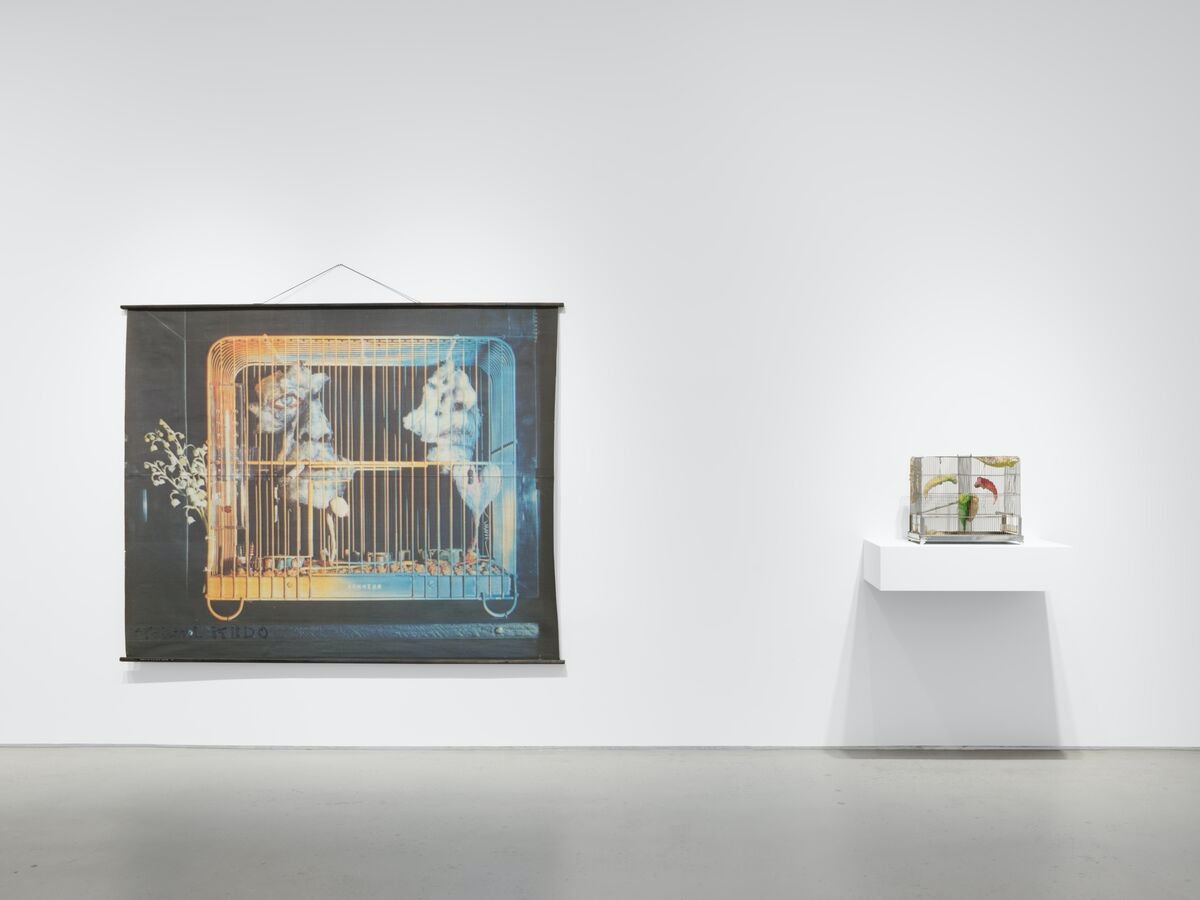 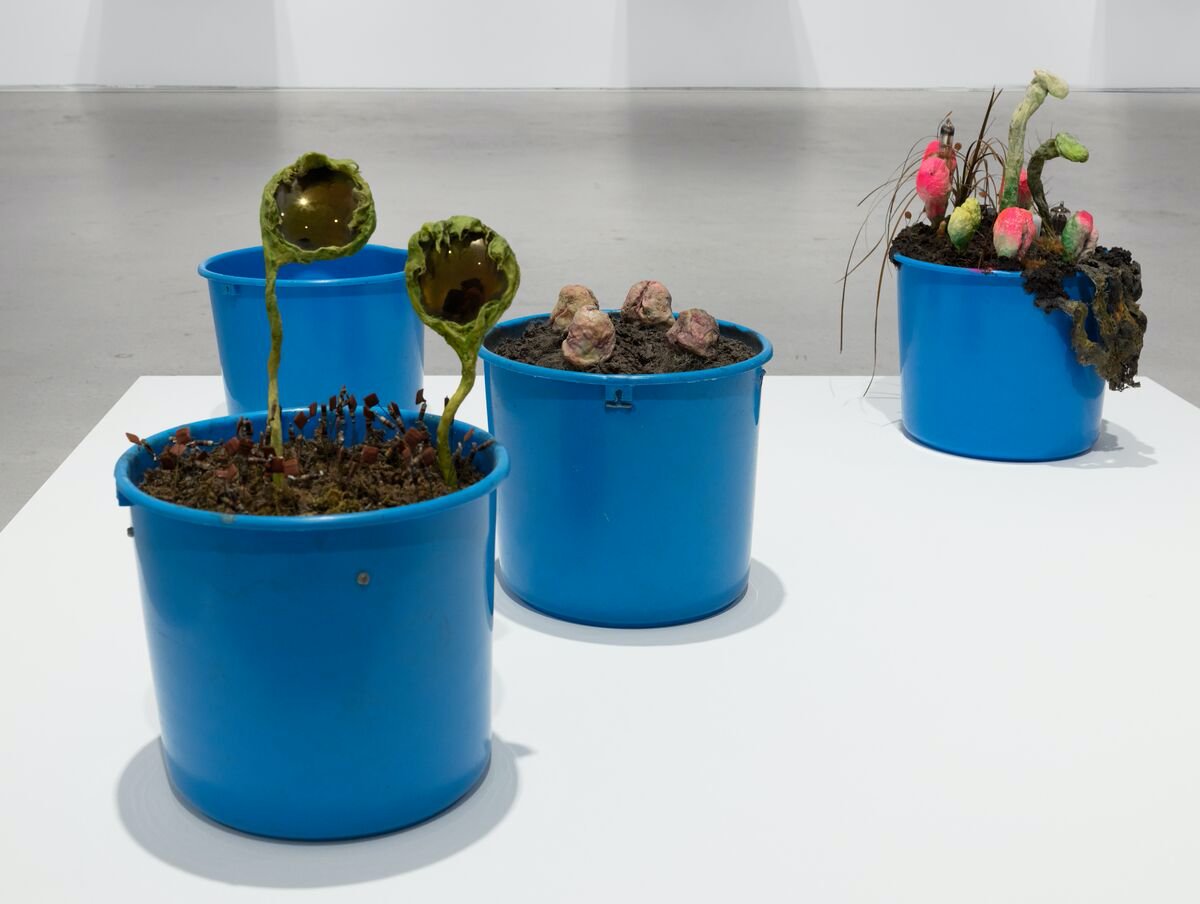 ‘Tetsumi Kudo: Metamorphosis,’ brings together 20 significant works created in the decade following Kudo’s move from Japan to Paris in 1962. The selection includes highlights from the artist’s signature container works – cubes, cages, buckets, and terrariums – comprising meticulously constructed tableaux; a monumental canvas made with a computer, and examples of his drawings and conceptual sketches related to these series. Kudo intended his seemingly grotesque yet playful scenes as both models of contemporary life and provocations meant to encourage viewers to confront and put aside the confines of ego and the values of consumerism and to understand themselves instead as part of an integrated and intricate cosmos in which nature, technology, and humanity influenced each other in a system he dubbed the New Ecology.

Kudo understood metamorphosis on several levels – as a biological process, a social phenomenon and as a metaphor for the spiritual evolution he believed was necessary. Kudo’s aesthetics and philosophical considerations were influenced by his early interests in biology, set theory, astrophysics, quantum mechanics, and popular culture, and were inflected by post war debates in Japan and Europe about societal evolution after World War II. Kudo’s micro-worlds cultivate an uncanny fusing of imagery derived from the artist’s highly personal visual lexicon that includes eyeballs, crawling penises, cacti, plastic flowers, pills, transistors and thermometers. His ‘visual maquettes’ draw viewers into a world of mutations and self-organizing biological systems that reflect the desolation and decay mankind has wreaked upon the macroscopic world.

‘Testsumi Kudo: Metamorphosis’ is organized in cooperation with Hiroko Kudo and the Estate of the Artist as well as in collaboration with Joshua Mack.

The exhibition at Hauser & Wirth opens with examples from Kudo’s cubes and dice. Using found and purchased objects – the detritus and stuff of European material culture – he filled small boxes with among other things, plastic dolls, kitchenware, clocks, cocoons (or objects wrapped in cocoons), and a proliferation of fragmented body parts that he constructed in paper mâché and cotton. The dice serve as metaphors for the randomness of fate, and Kudo uses their interiors to present viewers with a portrait of themselves as they are.

Kudo arrived in Paris in 1962, and thought of himself as an ‘observer’ of the West, compelled to disrupt the political, economic, and anthropocentric climate of European humanism and its influence on 20th century art and culture. Two large-scale stacked die comprise ‘Bonjour et Bonne Nuit (Good Day and Good Night)’ (1963). A swollen head with deteriorating-colored flesh occupies the upper cube. In the lower cube, metal cooking steamers hang like celestial bodies. On the door, Kudo has compiled an assemblage of vials, pills, a picture of the Mona Lisa, a miniature chessboard, and a gun. In ‘Your Portrait – F’ (1963), a painted blue box is filled with cocoons and an alarm clock. One chrysalis has hatched, revealing the contents of the pupa: a jumble of wires and small incandescent lightbulbs. In these microcosms of unnatural but inevitable processes of synthetic mutations, Kudo presents a portrait of our position in modern culture, hinting that our free will and individual agency is fiction and that life is controlled by a variety of larger societal mechanisms and forces of chance.

From 1965 to 1981, Kudo made works with small animal cages, his longest sustained engagement with a form. These works are significant for their inclusion of an everyday object like the birdcage, which contextualizes his assemblages within the realm of the domestic. In ‘For Your Living Room – For Nostalgic Purpose’ (1966), forms that resemble both pupae and phalluses crawl up and along the sides of a cage, while others sit perched on swings like canaries. Kudo fills their food and water trays with pills rather than sustenance like bird seed. In these environments, Kudo perpetuates the idea that humans, like pets, are being ‘fed’ or controlled by a larger organizing system.

In 1967, Kudo began a series of works he called ‘cultivations.’ These artificially colored spatial assemblages include the artist’s buckets, terrariums, and cages. In a series of works individually titled ‘Cultivation of Nature & People Who Are Looking at it’ (1970-71), Kudo utilizes blue plastic buckets to create contained ecosystems. One bucket is filled with artificial soil and four penises, another contains gooey glistening eyeballs and snails, as if just gathered from the ocean. A mirror placed in the bottom of the bucket engages the viewer, allowing us to catch our reflection and see ourselves as part of this biological cultivation.

Kudo summarized his evolving concepts in the hand written manifesto ‘Pollution – Cultivation – New Ecology,’ which was published in the catalog for his solo exhibition at the Stedelijk Museum Amsterdam in 1971. Here he posited a new ecology in which humanity, nature, and technology were fusing into a continuous circuit of mutual influence and dependence that rendered Western philosophies emphasis on individuality and human dignity moot. Works such as ‘Cultivation’ (1972) and ‘La liberté de l’ étalon’ (1972-77), on view in the exhibition, suggest this ongoing metamorphosis. In the latter, phallic snails surround a crucifix within a neon orange cage. The sculpture riffs on Renaissance depictions of the Crucifixion. Entangled in electrical wires, Kudo’s mutating figures suggest that art, religion and history are organized systems like electricity and technology, and that they too must metamorphosize in the New Ecology.

Tetsumi Kudo’s legacy gains new cogency and relevance today. The ‘pollution’ he references not only impacts our environmental landscape but infiltrates our social, economic, political, technological and psychological systems. His work brings environmental destruction and the effect of technology, industry, and mass consumption on our lives to center-frame. In the present moment, Kudo’s regenerative artistic philosophy can be looked to for guidance. Kudo allows us to see that out of historical crisis, a period of change can arise.