The New Art Centre presents an exhibition of work by Tess Jaray, including new paintings inspired by the altarpieces of Piero della Francesca. Jaray’s work is exhibited across the Gallery and the Stable Gallery, a newly converted space in the Artist’s House courtyard. 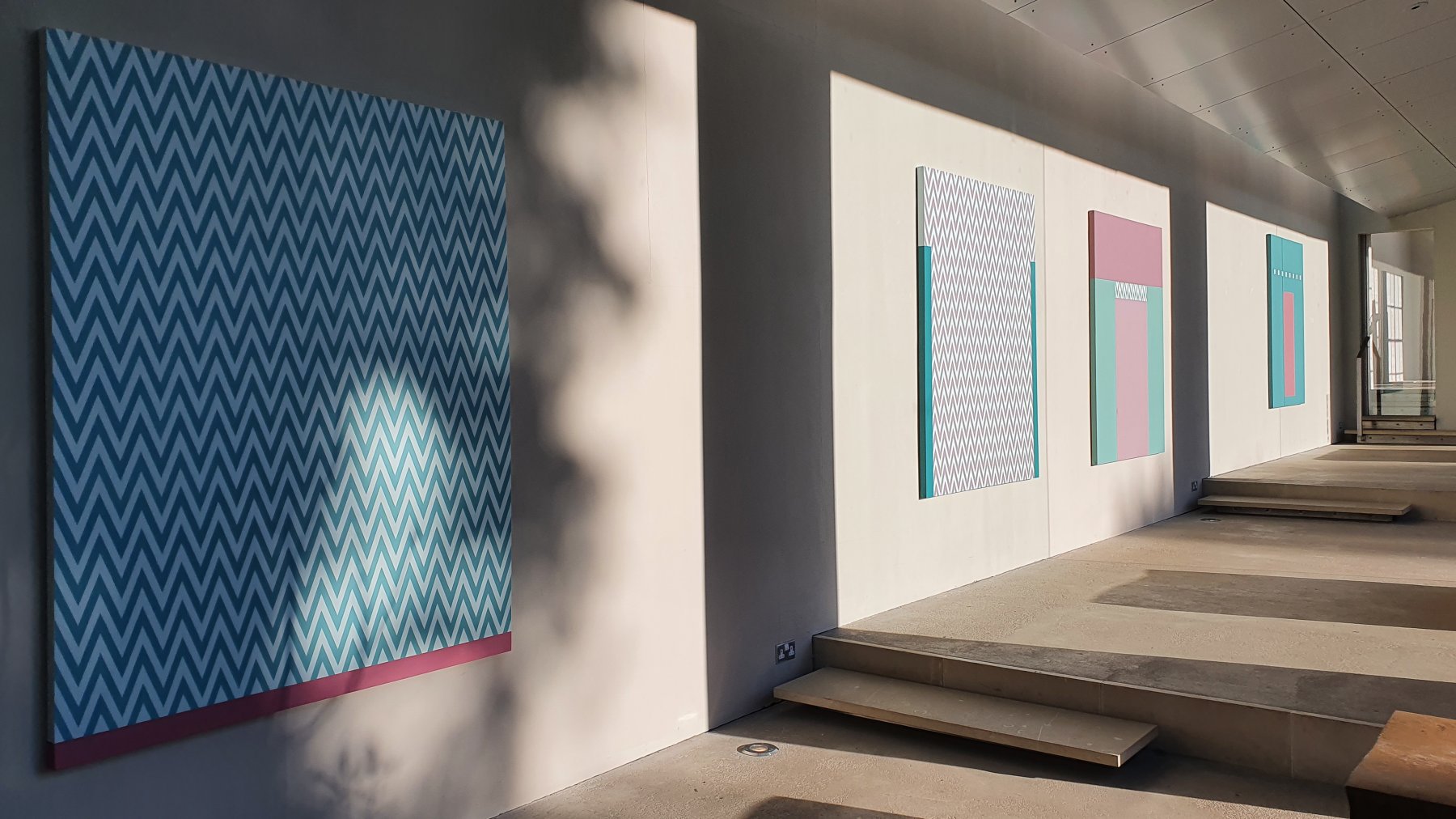 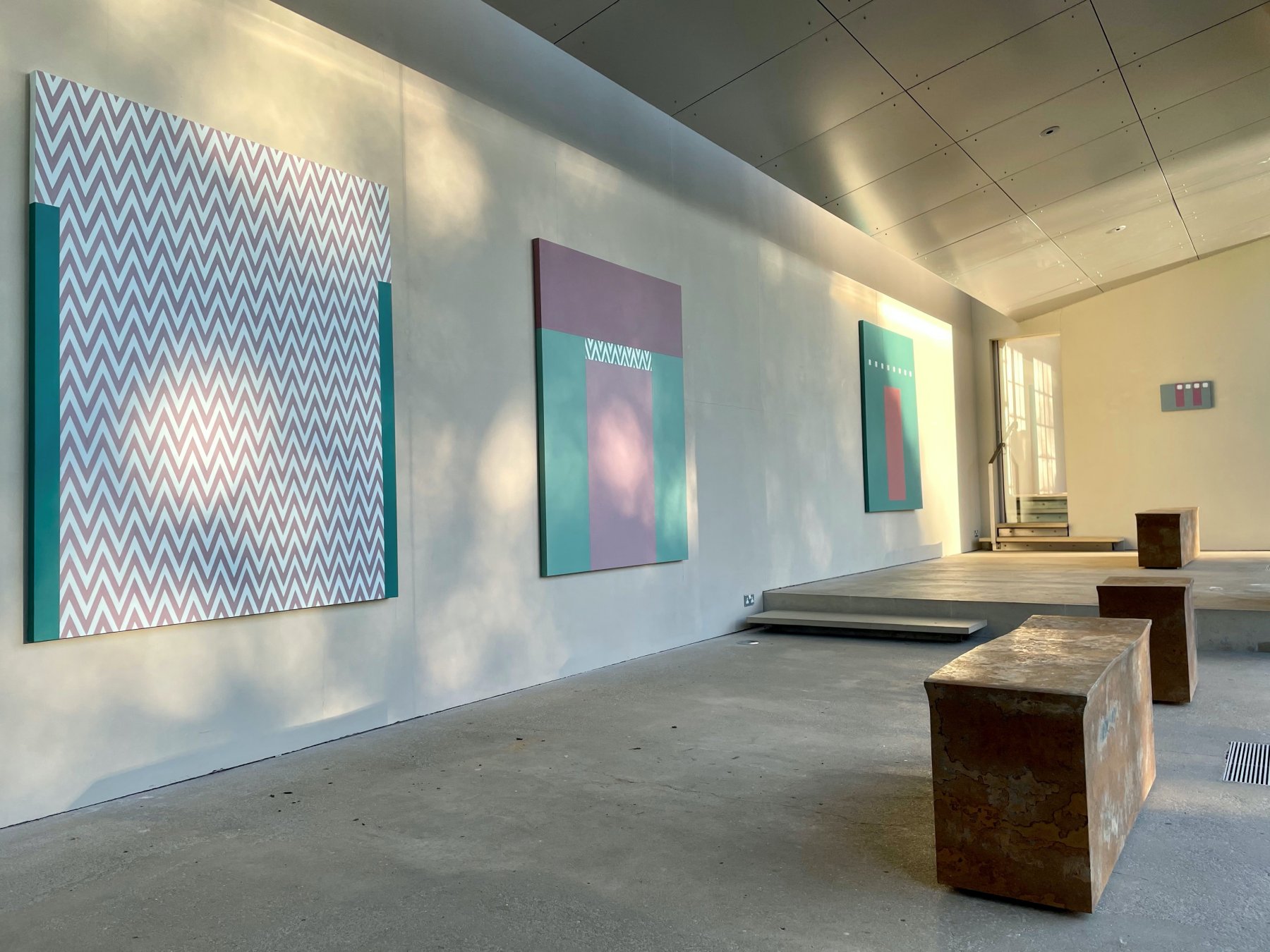 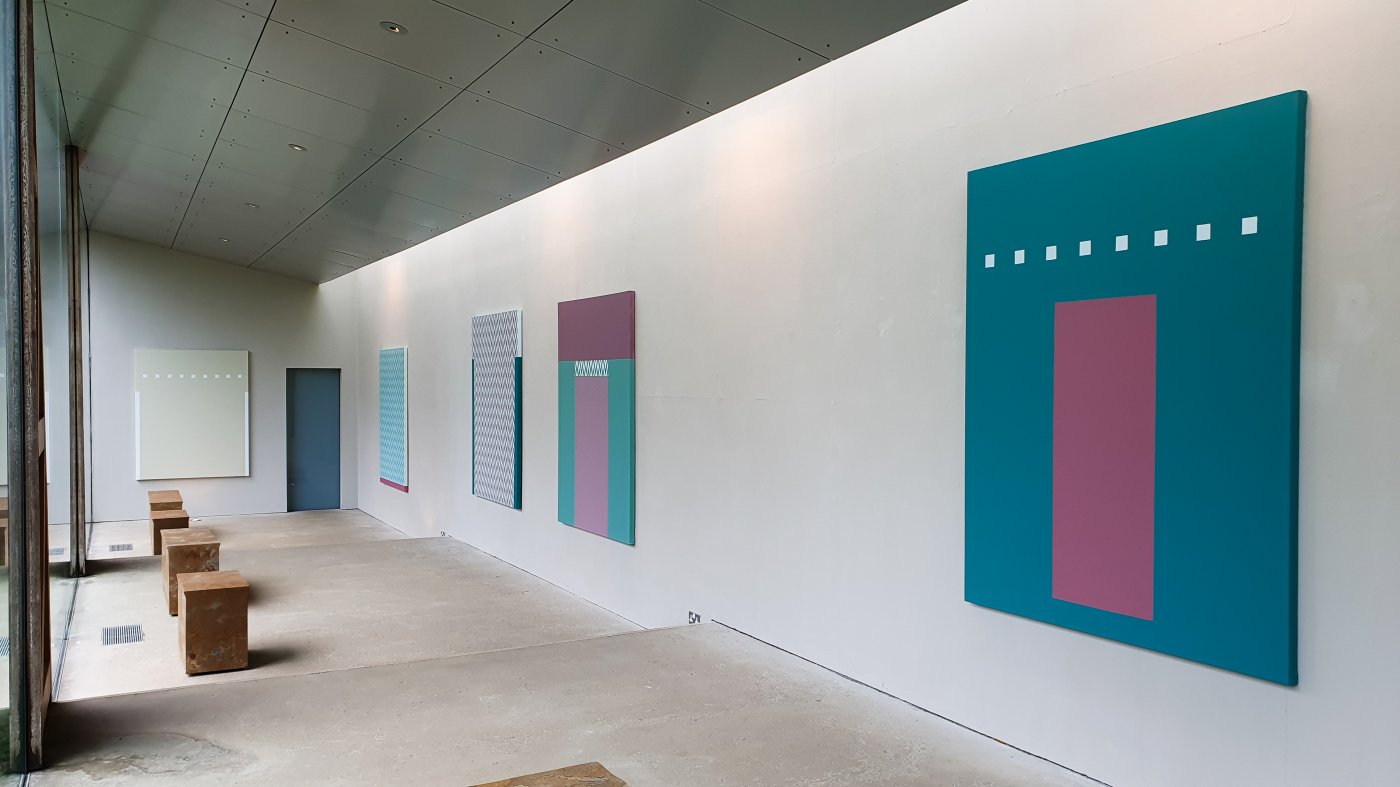 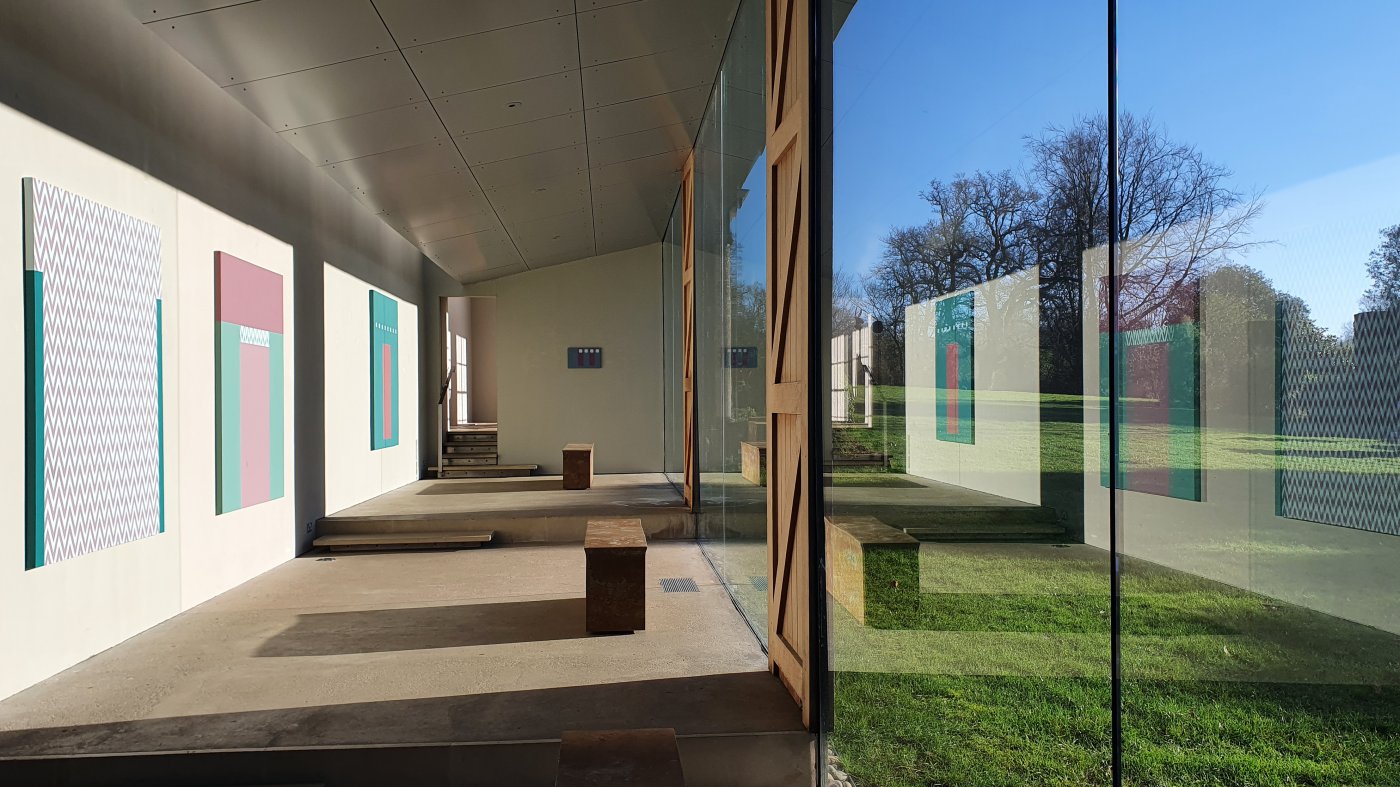 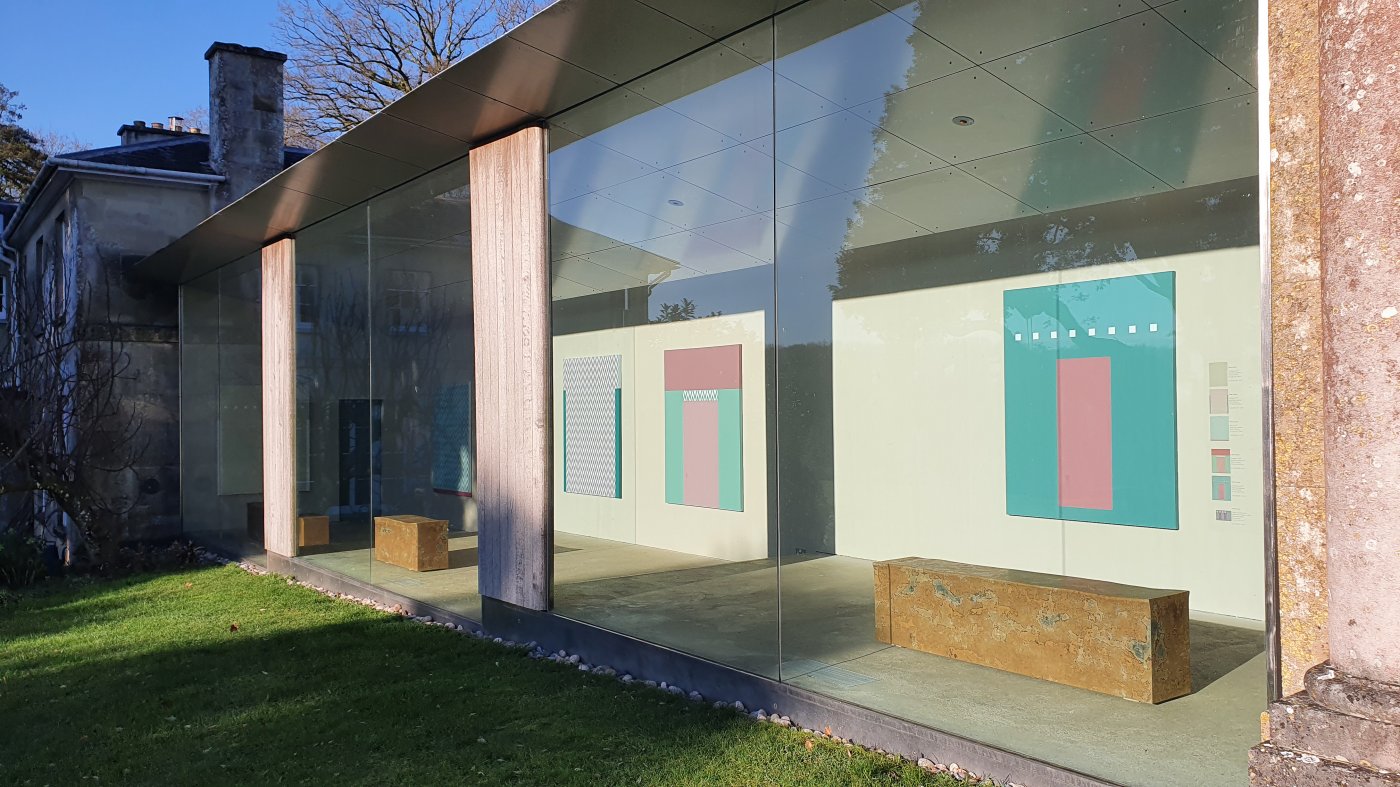 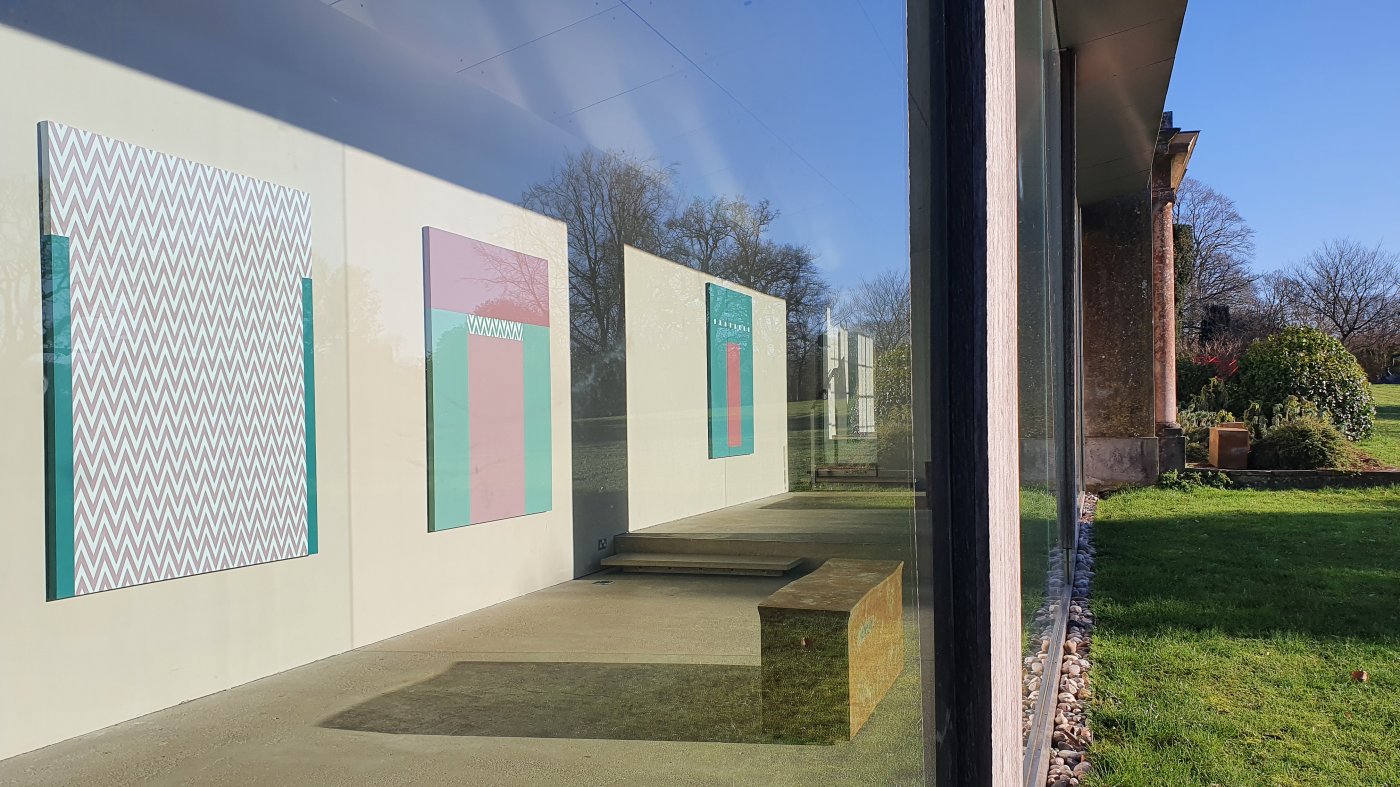 Tess Jaray, RA (b. 1937, Vienna, Austria) is one of Britain’s most distinguished and influential painters. Jaray works in the abstract tradition; for over 50 years she has used painting, drawing and printmaking to explore and expand her personal interactions with architectural space, mass, surface and light. While her work may present as nonrepresentational, it is invariably informed by lived experiences of the visual world – what Jaray terms ‘[the] geometry of human relationships’.

Jaray often takes her own interactions with architectural sites as a starting point, although specificity is invariably abstracted. Using block colours and geometric forms, her intellectual and emotional experiences are distilled, translated and transposed into evocative compositions. The resulting works represent studies into the potential of repetition and reduction aiming to communicate ideas far greater than themselves. Throughout this process, Jaray constantly asks: ‘How to present complex space with the simplest possible means?’ The subsequent canvases are examples of ‘what’s left when everything else is taken away.’

A series of new works, small-format paintings which Jaray has made in response to the frescoes by 15th century painter Piero della Francesca, will be hung in the Stable Gallery. Drawing from Piero’s distinct painterly vocabulary – his handling of colour, his geometric compositions and the manner in which he assembled unified scenes – Jaray has generated her own pared-down visual language in order to focus on the possibilities of space. In these paintings, her human approach to abstraction is brought to the fore, as her handling of seemingly familiar imagery invites viewers to enter into the picture plane and participate in the responsive process.

Jaray’s longstanding interest in Piero’s depictions of three-dimensional space – in which biblical scenes are enacted in such a manner that the viewer is invited to actively participate in their narratives – arose following a transformative period spent in Italy as a young artist. During this time she immersed herself in the art and architecture of the Renaissance, and was inspired by the academic Roberto Longhi’s seminal work on Piero of 1927.

The Gallery at the New Art Centre will include large format paintings that explore the relationship between facade, internal space and the decorative motif. Rendered in Jaray’s distinctive palette of teal, burgundy and stone-washed grey, the works intimate architectural features and ornaments while denying the viewer access to their actual points of reference. In Glimpse (2017), a clean mauve block suggests a door or a looming window; the sharp zig-zags of Return and Echo (both 2017) recall Art Deco tile patterns while their titles prompt further considerations of recall and personal reminiscence. In this sense, Jaray’s works sit at the threshold between the recognisable and the wholly abstract, each canvas posing fresh questions of the manner in which we interact with the aesthetics of the world around us.

A book of Jaray’s Piero paintings, published by Ridinghouse, will be launched at the New Art Centre during the exhibition’s run. Tess Jaray is represented by Karsten Schubert London. A forthcoming solo exhibition of her work will be held at Secession, Vienna, 19 February-11 April 2021.

Tess Jaray was born in Vienna, Austria, in 1937 and came with her family to England, in 1938. At sixteen, Jaray went to study at Saint Martin’s School of Art in London. From 1957-60 she attended the Slade School of Fine Art, University College London. She would go on to have a long and distinguished teaching career, teaching at the Slade from 1968-1999. In the late 1980s and the 1990s, Jaray completed five large public commissions, including Centenary Square in Birmingham (now destroyed) and Wakefield Cathedral Precinct. Her work is held in national and international public collections, including: