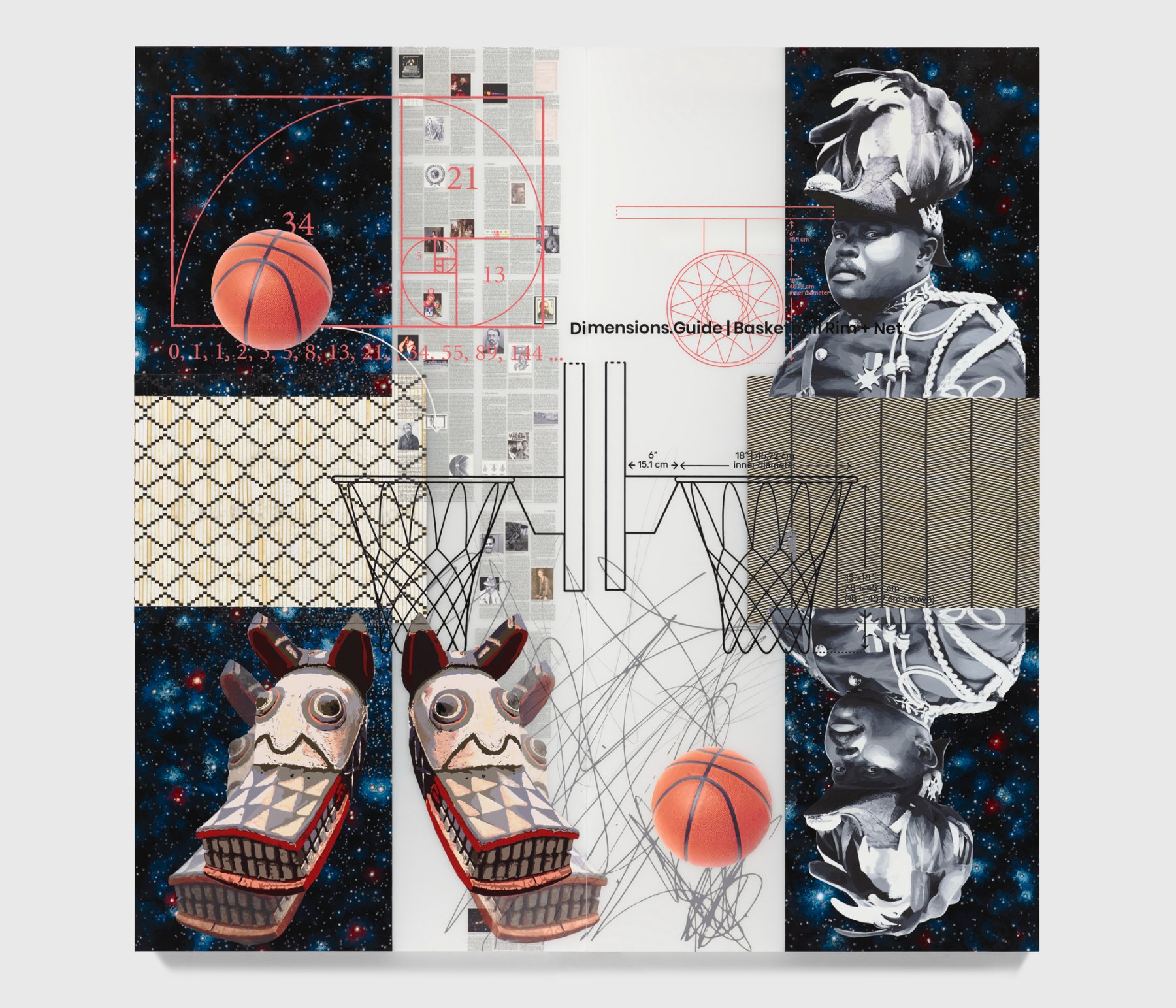 The Awakening marks part one of a trilogy of exhibitions, which will continue with In Total Darkness at Galerie Marian Goodman, Paris, and In Broad Daylight at Galerie Perrotin, Paris, which will be on view concurrently this Fall, in October 2022.

The Awakening’s point of departure is the life and work of the pioneering Jamaican-born activist Marcus Garvey (1887-1940). A charismatic leader, Garvey incorporated the Black-owned steamship company The Black Star Line (1919-1922), which aimed to unify and connect people of African descent worldwide, via both the transport of emigrants back to Africa and through the shipment of goods among people of the African Diaspora. The Black Star Line (a play on the luxury British steamship The White Star Line) was created with the support of the Universal Negro Improvement Association (UNIA) which Garvey founded in 1914, and embodied tenets of black self-determination and autonomy heralded by the UNIA.

Almost a century later, Strachan acknowledges Garvey’s profound influence upon history, as well as his personal importance to the Bahamian-born artist. An artist committed to redressing historical bias, Strachan mines the archives of history to turn the lens in a different direction and to invert the trans- Atlantic story. Drawing on influences that span from jazz, reggae, hip-hop, to sports and culture, science and space, Strachan applies a dub aesthetic within his practice, sampling and recombining from sites of human ambition and the archives of history to create works that address a dynamic range of subjects and counter established narratives.

Reflecting on Garvey’s legacy, Tavares Strachan initiates the exhibition with Septimius Severus, 2022, a newly imagined installation titled after the eponymous African Roman Emperor (145-211 CE), which continues the artist’s ongoing project Encyclopedia of Invisibility. An expansive site-specific environment becomes a conduit for the exploration of the exhibition’s metaphor of the dawn, in which the viewer traverses from North and South Galleries to differentiate darkness and light. In this immersive experience, one encounters congruous and hermetic spaces. Through the exhibition, Tavares creates parallel worlds and tension points that reflect upon structures of knowledge. These relational frameworks allow counterpoints to develop in response to tropes of authority, unearthing how meaning changes when contexts shift.

Tavares Strachan was born in 1979 in Nassau, Bahamas, and currently lives and works between New York City and Nassau. He received a BFA in Glass from the Rhode Island School of Design in 2003 and an MFA from Yale University in 2006. Strachan’s work has been the feature of many exhibitions, including Always, Sometimes, Never, Frye Art Museum, Seattle, WA (2018); You Belong Here, Prospect 3. Biennial, New Orleans, LA (2014); The Immeasurable Daydream, Biennale de Lyon, France (2013); Polar Eclipse, The Bahamas National Pavilion 55th Venice Biennale, Italy (2013); Seen/Unseen, Undisclosed Exhibition, New York, NY (2011); Orthostatic Tolerance: It Might Not Be Such a Bad Idea if I Never Went Home Again, MIT List Visual Arts Center, Cambridge, MA (2010); and You Can Do Whatever You Like (Orthostatic Tolerance Project), Institute of Contemporary Art, University of Pennsylvania, Philadelphia, PA (2009); among others. He has created site-specific installations for the Barclays Center, Brooklyn, NY (2021), and at the Baltimore Museum of Art, MD (2018). Strachan has also been the recipient of numerous awards including Artist in Residence at the Getty Research Institute (2019-2020); Frontier Art Prize (2018), and the Allen Institute’s inaugural artist-in-residence (2018); LACMA Art + Technology Lab Artist Grant (2014); Tiffany Foundation Grant (2008); Grand Arts Residency Fellowship (2007), and the Alice B. Kimball Fellowship (2006).